I know what you’re thinking, a new Iron Man review from Prometheum5? Didn’t we get rid of that guy? I have to admit that, at some point, reviewing Iron Man toys down to the smallest minutia got tedious. What we’re looking at today is something special and a little fresh. What I’ve got to share today is the new Iron Man Mk XXXVIII Igor from Comicave Studios’ 1/12 scale diecast line. 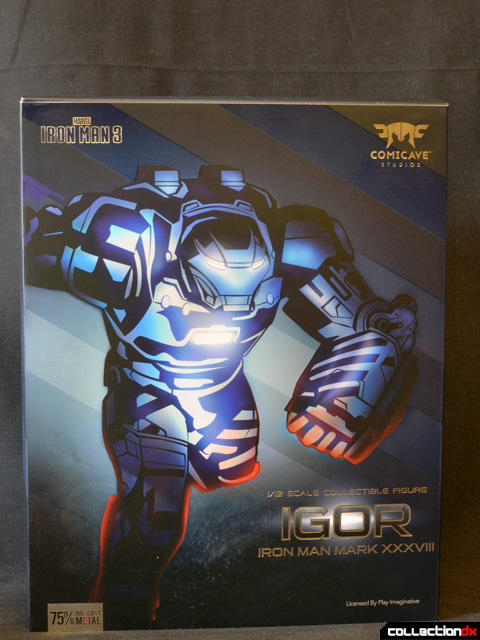 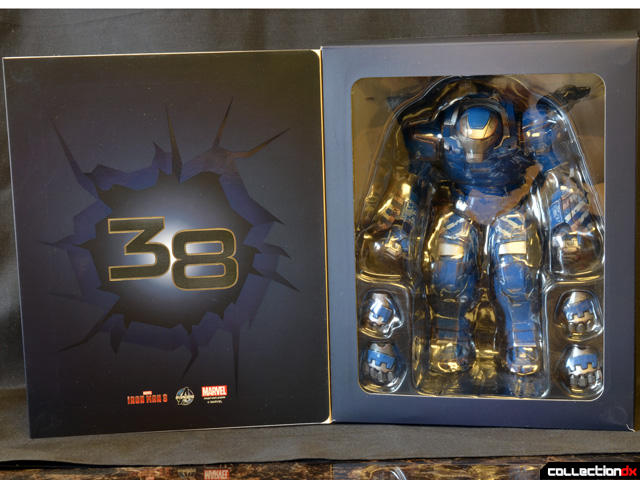 Before we start, where would an Iron Man review be without a little history lesson. You may be asking yourself, ‘who the heck is Comicave Studios?’ and ‘wasn’t Play Imaginative making a large and small scale diecast Iron Man line?’ You may remember seeing pictures from New York Comic Con a few years back of the Play Imaginative booth featuring a complete spread of prototypes for high-end diecast renditions of every movie Iron Man suit in 1/4 and 1/12 scale. As it turns out, pretty much none of those toys were ever released. PI took preorders for a couple of figures at both scales and timelines slipped. Years went by. There were rumors of a very small amount of figures being released in Hong Kong to pretty unhappy reviews, and then things went dark for a long while. Somewhere in the beginning of 2015, PI was apparently purchased or partnered with a company from Dubai called Comicave Studios. Since then, Comicave has apparently turned things around, because I have an actual, real life 1/12 scale diecast Igor figure in my hand now, and I am glad they did!

Check out my HD video review for a look at Iron Man Mk XXXVIII Igor in action. 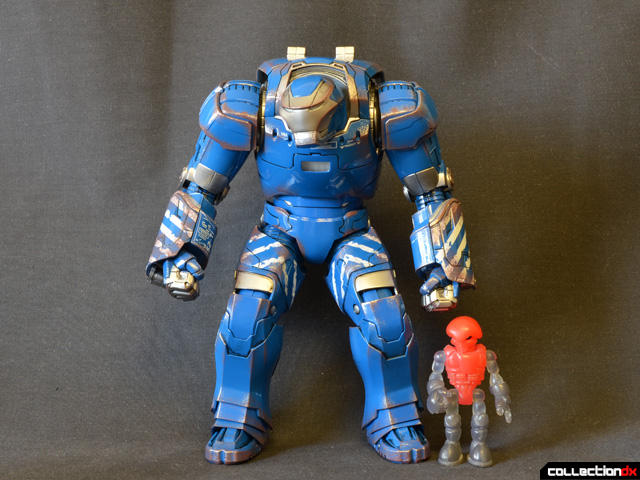 In 1/12 scale, Igor stands around nine inches tall (Glyos Wraith Pheyden shown for scale). The box advertises that Igor is 75% diecast metal, and I believe it. The toy is a tank, just a dense, powerful mass of metal and detail. 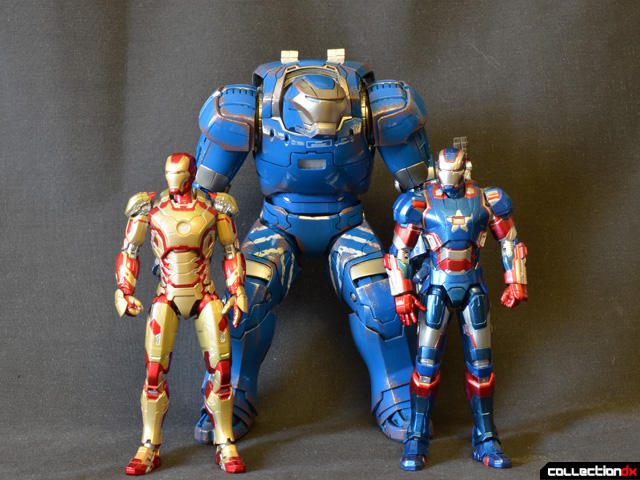 Igor is a big boy, but not the biggest movie Iron Man suit. That honor still falls to the Hulkbuster armor from Avengers: Age of Ultron. The Hulkbuster is a specialized combat suit built for raw power and survivability, but Igor is meant more as a heavy construction machine. Still, Igor overshadows regular Iron Man suits in both height and mass. 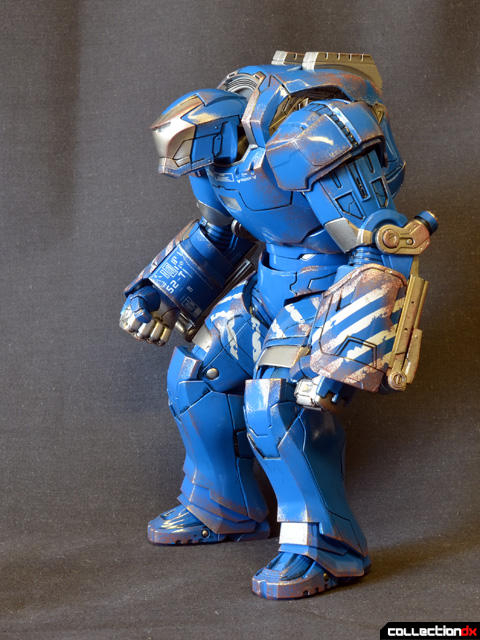 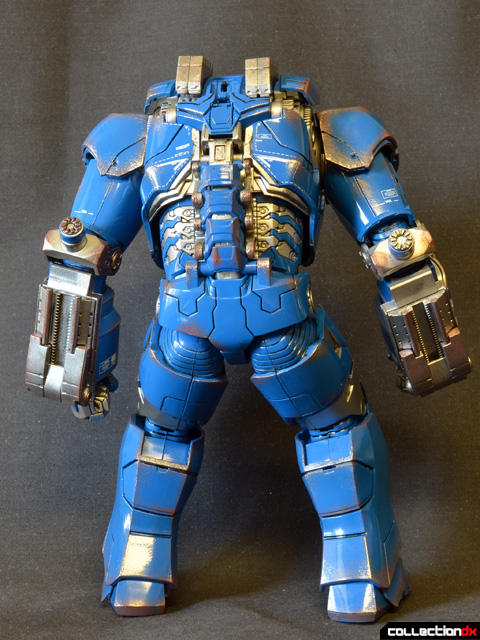 The fit, finish, and detail on Comicave’s Igor is exquisite. The toy has heft, and feels solid and durable. The joints are very good, with nice ratchets in the shoulders and very smooth friction joints throughout. Nothing sags or flops, and once you’ve settled the figure into a pose, it’s solid, not going anywhere. 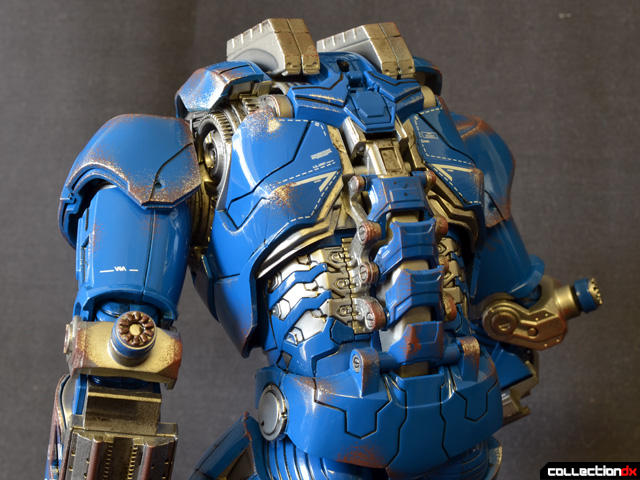 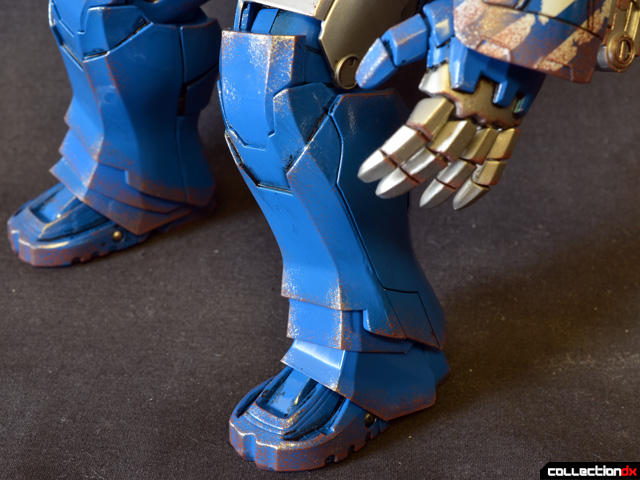 The paintwork on this big guy is lovely. The entire toy is finished in a glossy blue enamel, with silver details, white stenciling, caution stripes, nice looking sponged weathering and distressing, and an oily black wash to capture the details. Everything looks great, I could not find any flaws in the application at all. If I was building a model of Igor, this is about what I’d be shooting for myself. 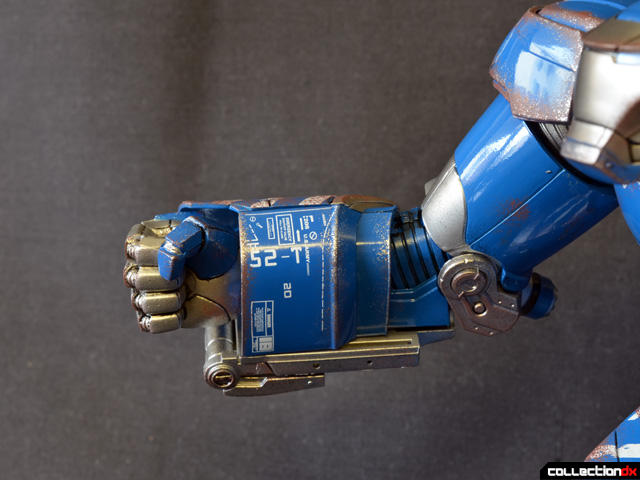 Seriously, check out the decal work! 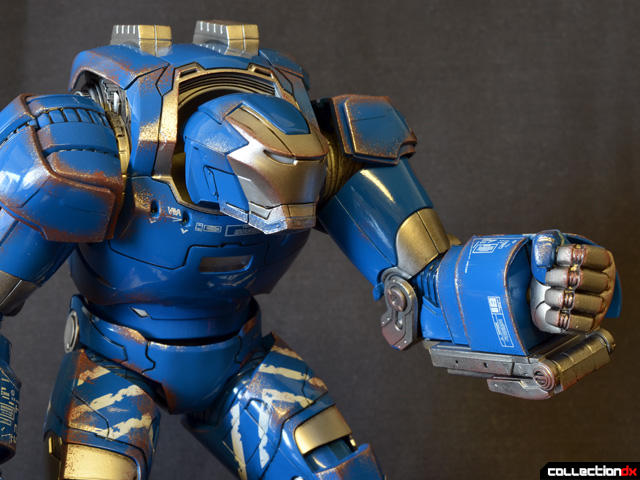 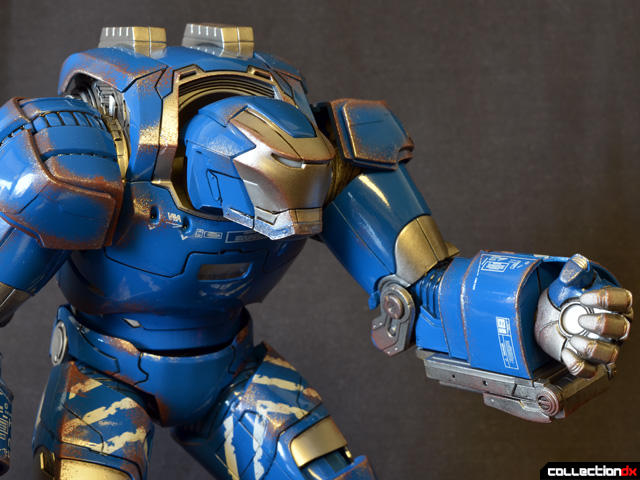 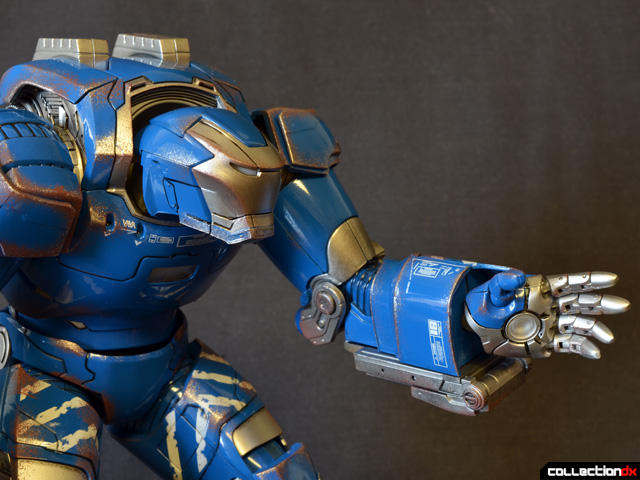 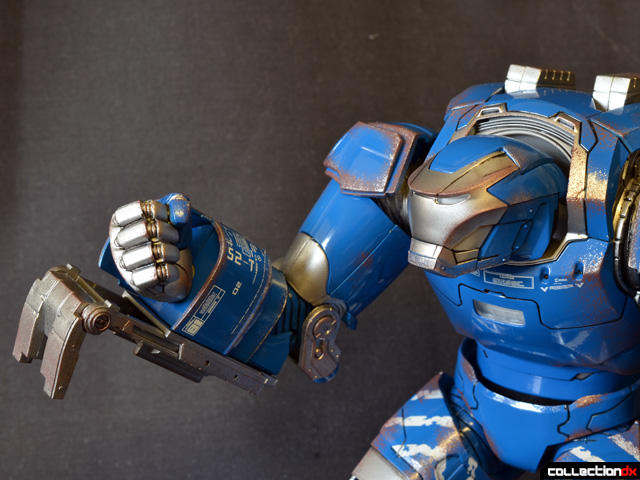 For other features, Igor has working arm braces for supporting heavy loads. These parts fold out and slide forward to shift the weight of a load onto the main structure of the arm rather than the hands. I was particularly impressed with these because they seem to be more accurate than that of the Hot Toys version, which fold out but do not slide forward. Score one for Comicave! 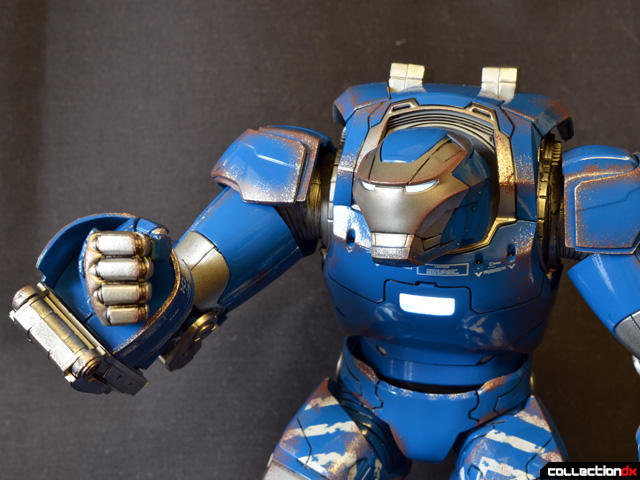 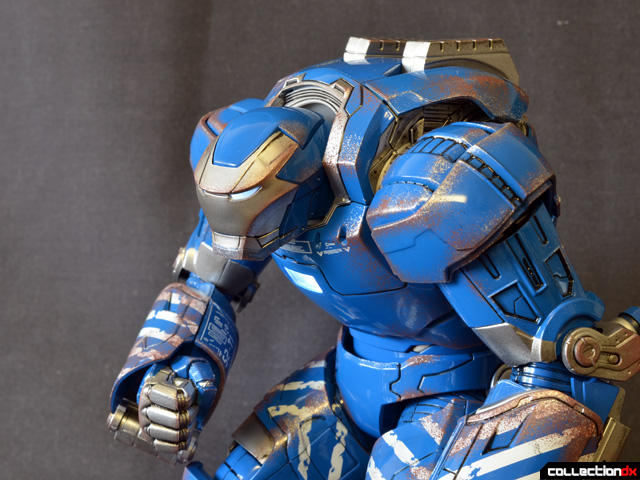 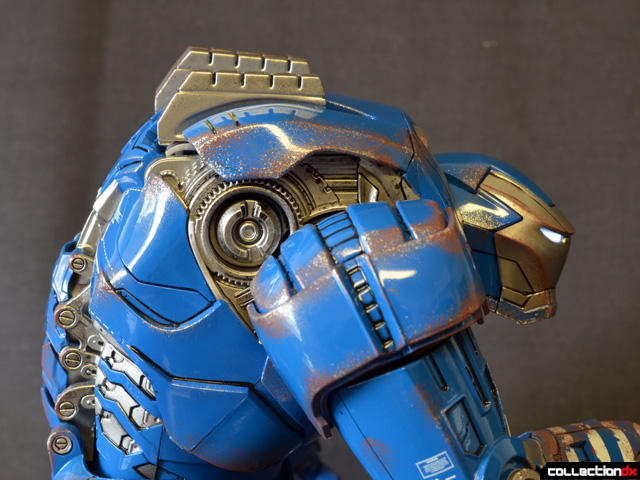 The other big feature is a set of lights in the head and chest. Each is powered by two LR621/LR626 button cell batteries, which come already installed. The LEDs have a nice white glow to them, and the battery covers are screwless for easy access. You do have to remove the head and remove a panel to access the switch for the eye lights, but the neck joint feels plenty durable to handle repeated use. 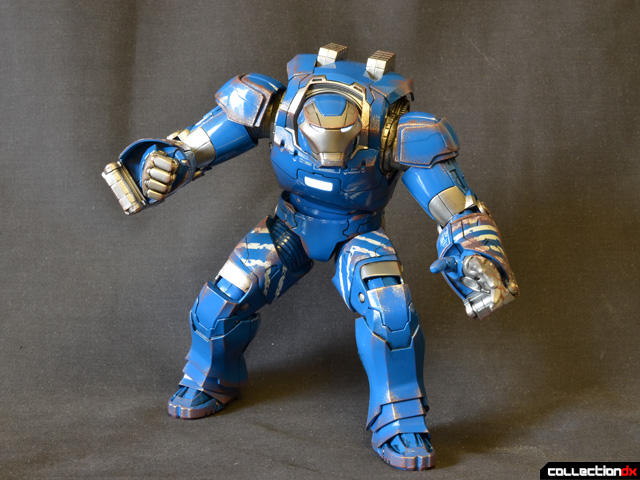 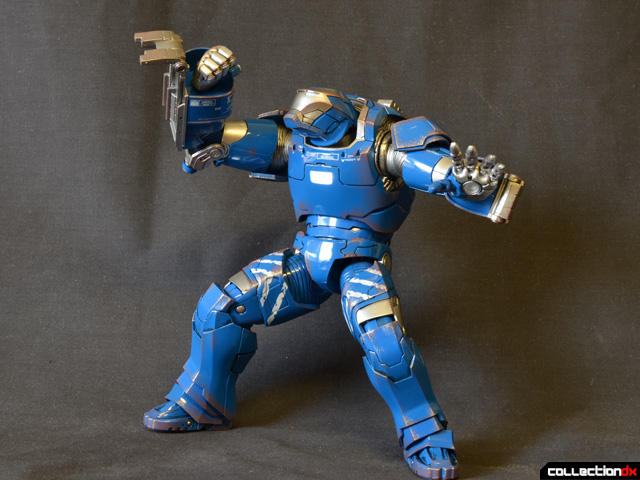 On top of a gorgeous finish and cool features (and all that metal!), Igor is also wonderfully articulated. Everything moves that should, with a high range of motion and well-engineered feeling joints. The hips and ankles pull down for extra range, allowing for some really solid and dynamic poses with good balance. Note that the knees do not bend fully straight, so Comicave’s Igor cannot stand quite as upright as Hot Toys’ version can. 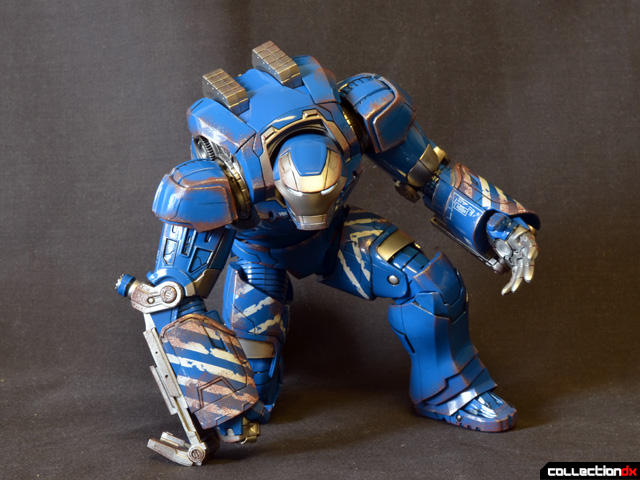 Check out that crouch! Igor can pretty much do the Iron Man Movie Poster Pose®, except way more badass when done by such a behemoth of a toy. 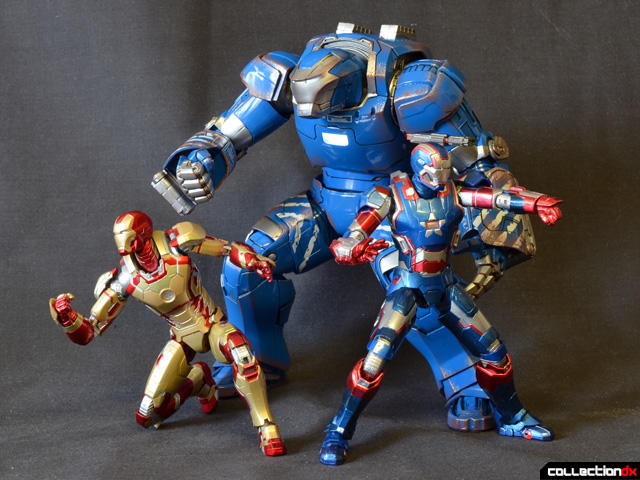 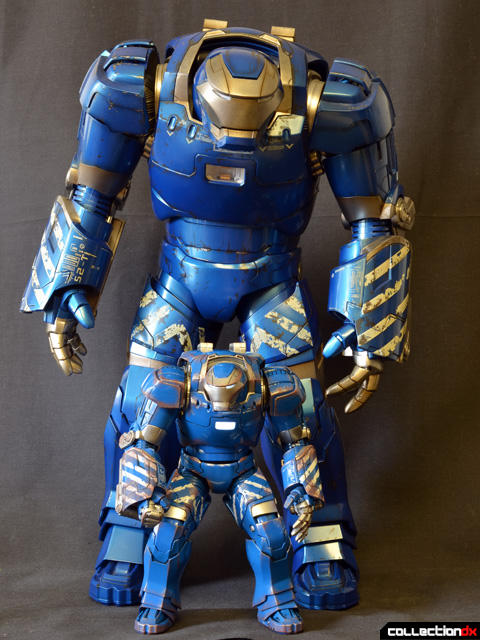 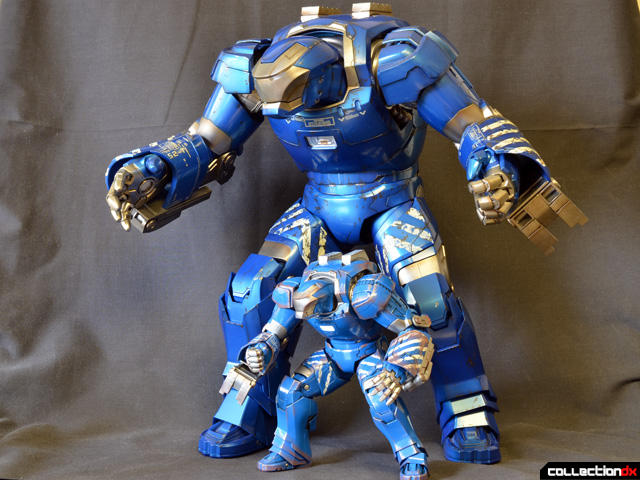 I’ve made a few comparisons between the Comicave Igor and the Hot Toys version, so here’s a couple quick shots of them together. Both are gorgeous, with spot on proportions, good articulation, lights, and great detail. I have to give props to the little diecast version for being a much more fun toy, whereas the Hot Toys figure is a massive centerpiece display item second to none. 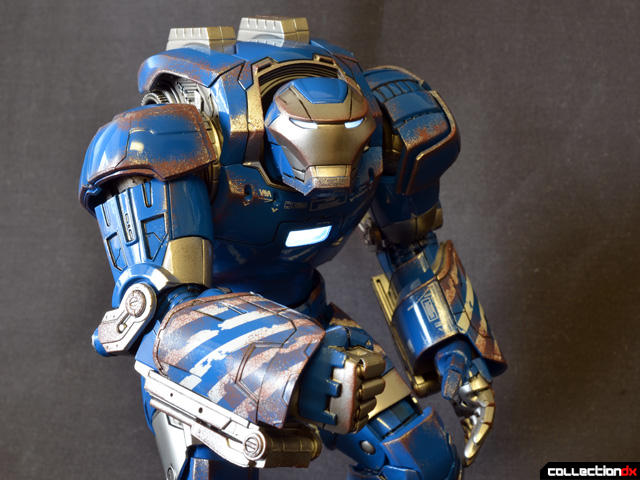 As if Comicave Studios hasn’t already impressed me enough, their diecast Igor is not nearly as pricy as I was expecting. You can pick one up right now for $184.99 using the affiliate links below. This definitely feels like a $200 toy, so to see them come in under that pricepoint is nice. I’d love it to be cheaper, but when you stack it up against the price of the nicer six inch figures like from Bandai, or compare to how much more you’d need to spend to pick up any Hot Toys Iron Man at this point, the price seems pretty fair. If you’re a diehard Iron Fan like I am, Comicave’s line is not something to be missed. I don’t think I’ll pick up any figures of suits that already have a six inch release, but Comicave Studios is doing some cool un-represented variants that I’ll certainly be picking up! Considering the somewhat sordid history behind this toy, I am beyond pleasantly surprised at the outcome. 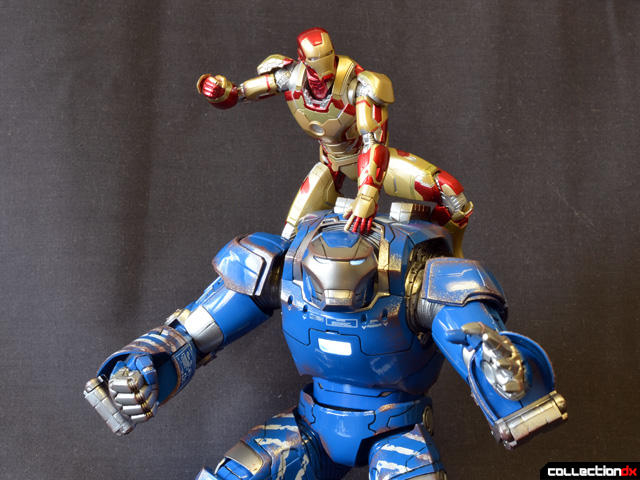 Cool review, and an unexpected one at that. It's nice to see another player in the game when it comes to high-end metal Iron Man toys, and their being a little cheaper than the competition definitely has my attention.