Iron Man 2 was awesome, and Hot Toys makes incredible 1/6 scale figures with the most realistic and life-like finish of any figures on the market.  Now that that’s out of the way, let’s get to business.

The Iron Man Mk V armor featured in Iron Man 2 references back to the olden days in the comic when the entire suit was collapsible and Tony Stark could carry it in his briefcase.  The distinctive silver and red color scheme is also a tribute to the Silver Centurion suit work in the 80’s by Stark.  The Silver Centurion suit was one of Stark’s most infamous, debuting when Tony defeated Obadiah Stane, and then being the suit worn during the classic Armor Wars story.  In the film, the Mk V armor collapses and transforms into an oversized briefcase for times when Tony travels. 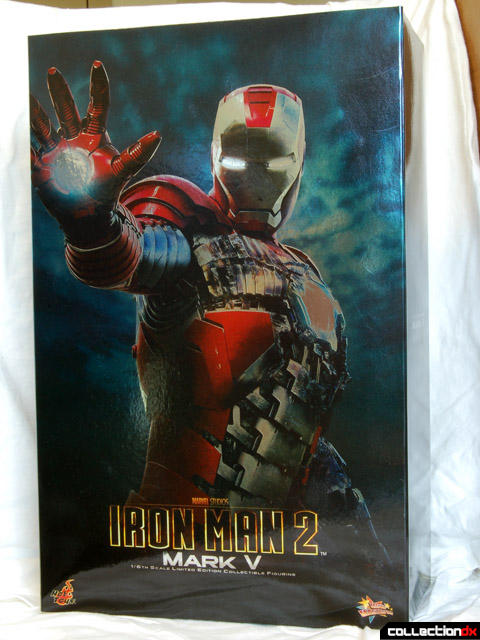 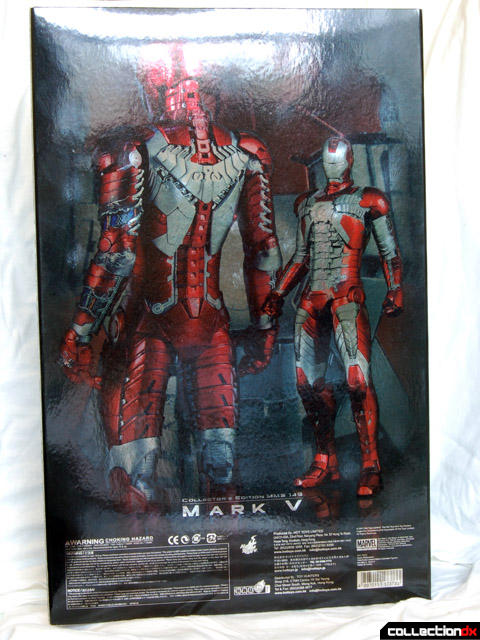 Hot Toys’ rendition of the Iron Man Mk V comes in their usual gorgeous foil-print slip-cover box.  Inside are two vacuum trays of figure and accessories. 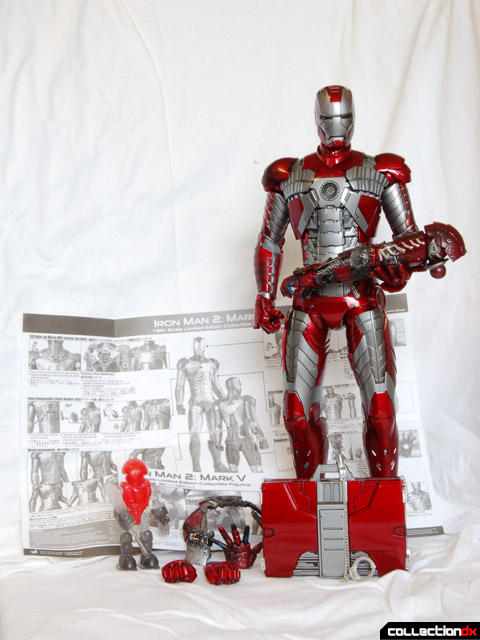 Compared to previous releases, the Mk V seems a bit light on accessories.  What it lacks in quantity, however, it more than makes up for in quality.  Included is the figure, a briefcase with a set of handcuffs for security, a set of clean fists, a set of clean articulated hands, a battle damaged arm with two swappable hands, and two battle damaged chest plate parts.  Wraith Pheyden shown for scale, and holding the included plastic pry-tool for swapping the chest armor.  Also included are both the standard doll-style stand and the scenic light-up flight-base included with the Iron Man Mk IV. 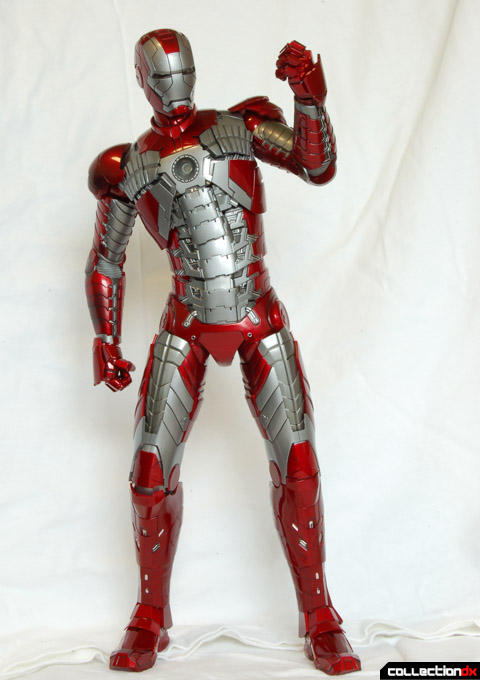 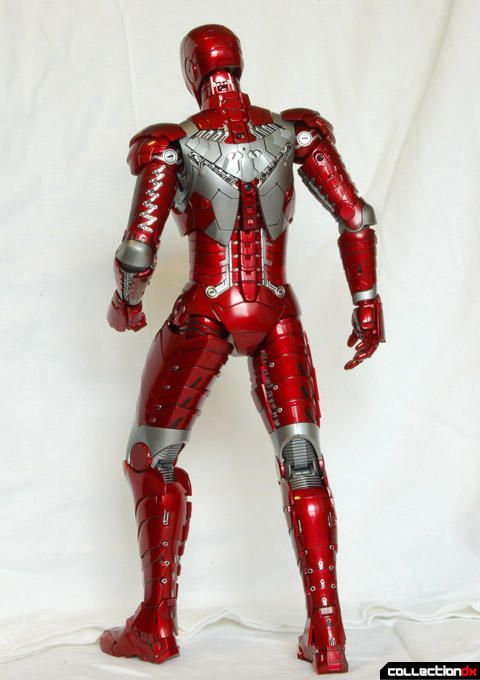 Iron Man stands just over twelve inches tall and is up to the now standard level of Hot Toys excellence.  He features articulation at every major point, but is not quite as flexible as the previous Iron Man Mk IV due to some design choices, mostly in the hips.  Everything is tight and movement is smooth. 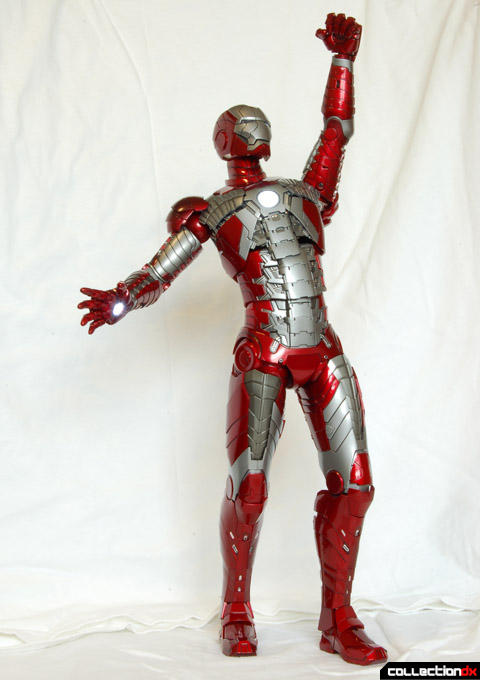 The fantastic extendable-torso feature is included to allow extra waist movement in a seamless fashion.  Like on War Machine, the armor plate below the Arc Reactor is spring-loaded to move as you pose the upper body.  The elbows feature a soft rubber part to cover the joint and match the segmented appearance of the rest of the armor. 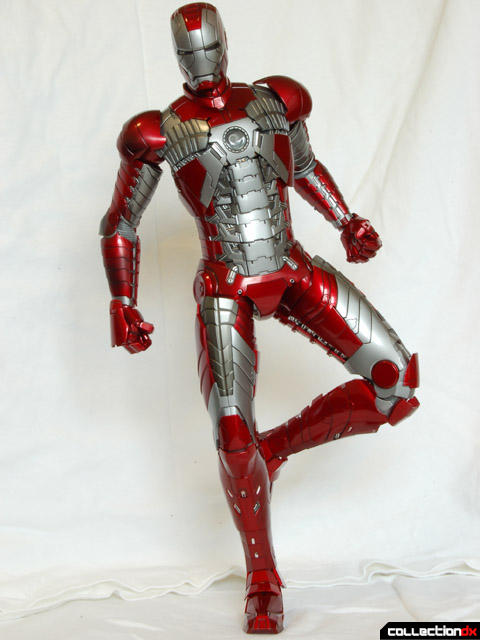 Iron Man can even balance on one foot. 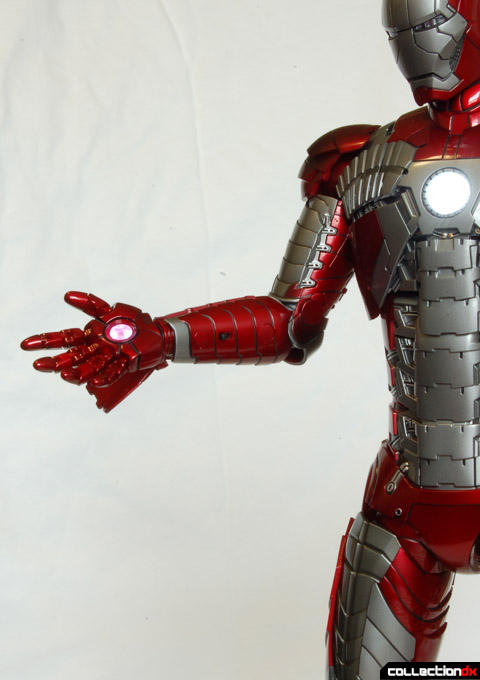 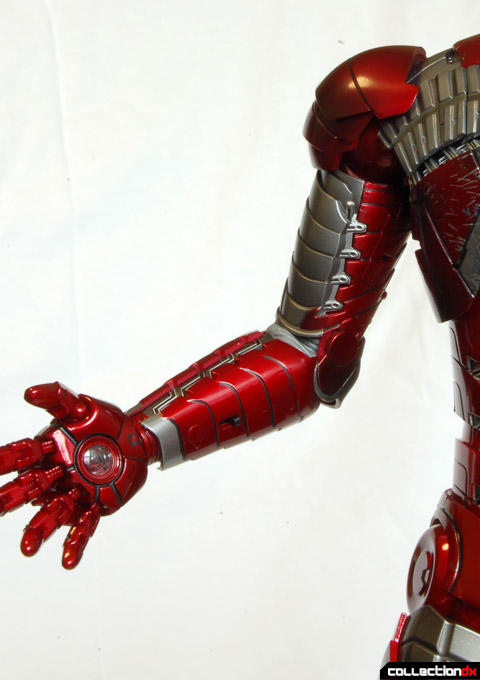 Detail is flawless and accurate to the film.  The Mk V suit is very complex and detailed due to its collapsible nature, and Hot Toys has given us the best rendition of it yet.  The one place where I think it stumbles is the heavy lines on the faceplate.  In the movie, the mask is made of a number of plates that slide into place, but they fit in an almost seamless fashion in the film, so the overdone panel lines here stand out a bit.  Iron Man also includes light-up features in the Arc Reactor, eyes, and palm repulsors.  The switches are all microscopic and blend right in.  The chest and palm lights are super bright.  I did run into a little trouble with the eye lights, however, and think one of the contacts might be a bit loose.  I sometimes have to wiggle the neck a bit to get the eyes to stay lit, but due to the light-piping of the eyes they are not that bright to begin with, so it is not the end of the world.  Still, this is the first time I have had any trouble from a light on a Hot Toys figure. 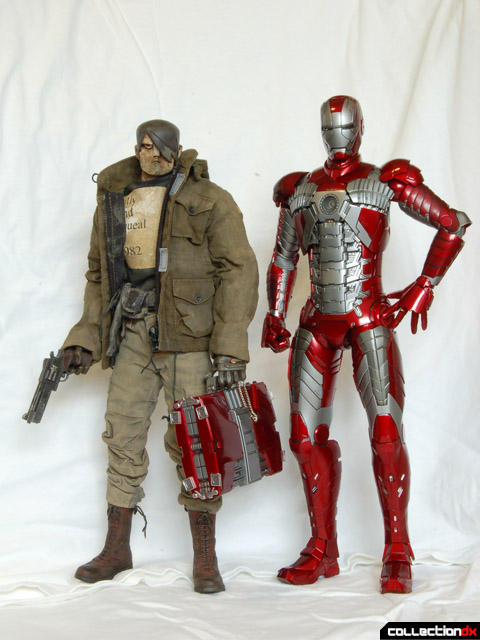 The briefcase and handcuffs are great.  Far more detailed than they need to be for such unessential accessories.  The cuffs even work, and feature a metal chain.  What I am waiting for now is somebody to make a John Favreau headsculpt so I can kitbash a Happy Hogan figure.  Until then, Bleak Mission is happy to carry the football when Stark is not using it. 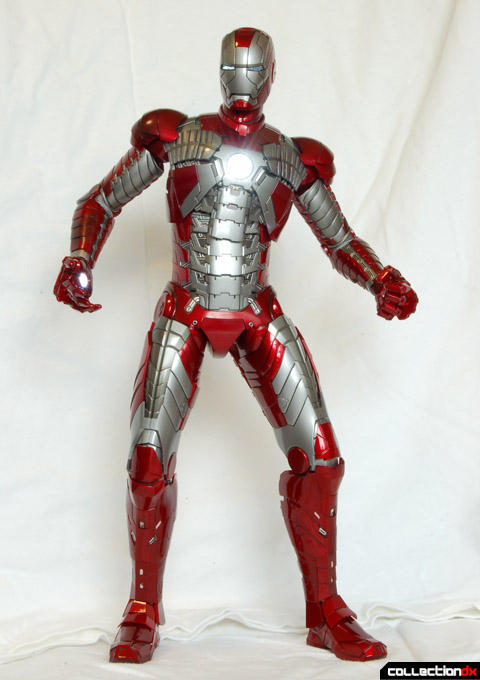 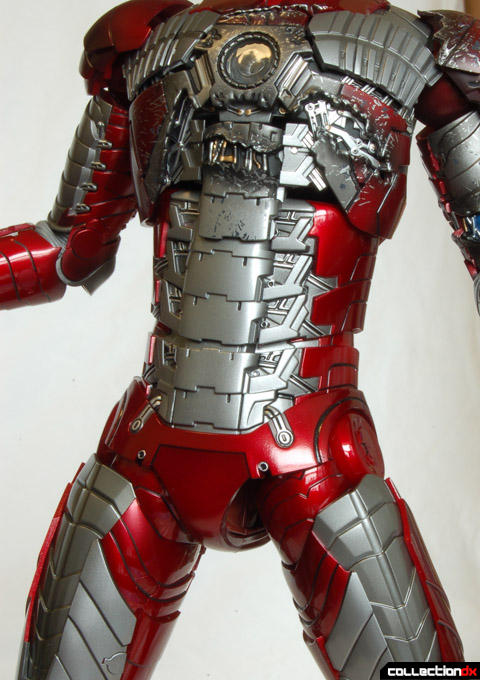 As I mentioned above, the hips are not quite as posable as I would have liked.  The pelvis area features a soft rubber part to allow for hip movement without sacrificing looks, but the cut of the rubber part gets in the way of the silver thigh pads at extreme angles.  On the Mk IV, there was a bit of a gap, so the thigh armor would slide over the rubber part, allowing for a great deal of movement, but on the Mk V the gap is not quite not quite as generous, and I actually put a little scratch on one side bending the leg too far. 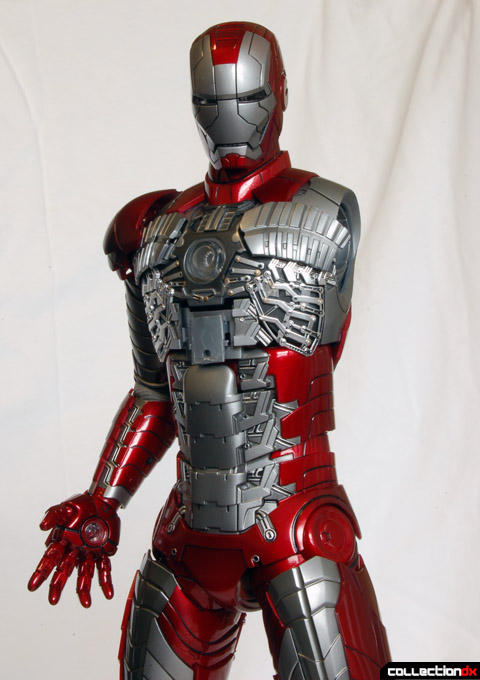 This figure is gorgeous and mostly well articulated, but it has another trick.  The left arm, chest plate, and ab armor plate can be swapped for battle damaged versions from during Stark’s battle with Whiplash.  I looked over the fight scene in the film, and the damage is pretty accurate.  The suit gets even more torn up before the fights is over, though, and I think even more damage parts would have been neat. 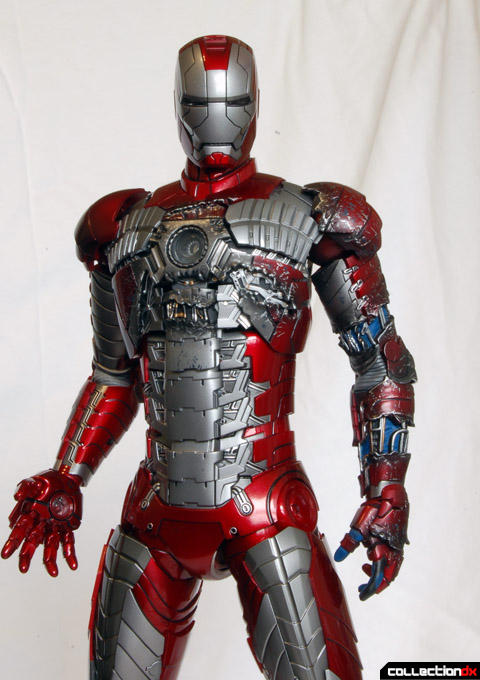 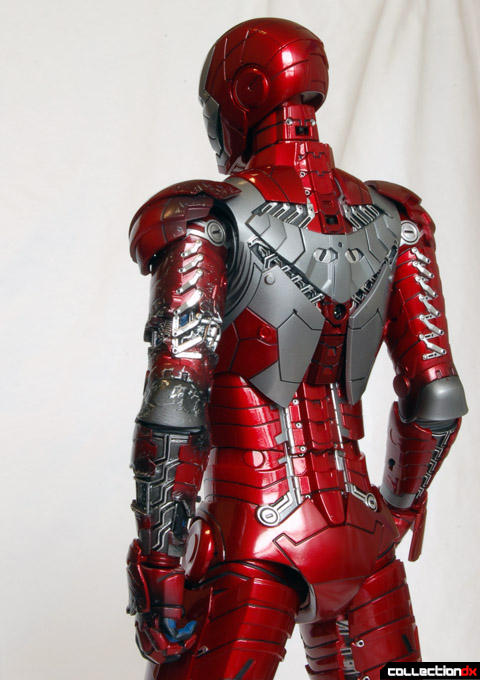 The left arm is attached via a big chunky ball and socket joint, and you just pull it right off.  I was a bit scared at first, but the whole joint feels very rugged.  I would just recommend pulling on the bicep, and not putting any pressure on the more fragile shoulder armor attachment point when pulling or pushing.  The chest plate clips on with some rugged tabs, and reveals some more fantastic mechanical detail under the chest plate. 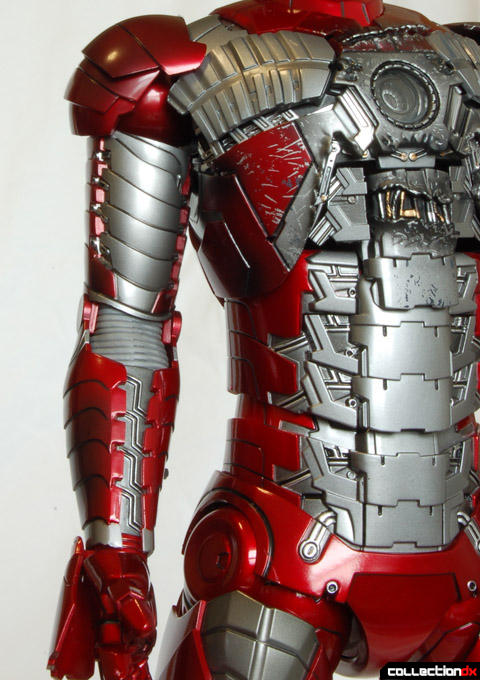 The sliding ab armor part is a different story.  The armor plate separates from the sliding mechanism, but this area is a bit fragile, and I actually dislodged mine when trying to swap it for the first time.  The spring shot out, and I spent an hour on my hands and knees before I found the miniscule spring and could reassemble everything.  Even after that, the battle damaged armor plate fits on very loosely, and I had to put a couple layers of clear packing tape on the slider part to add thickness until the armor plate was snug.  Again, not the end of the world, but the most annoyance I’ve experienced with a Hot Toys figure yet. 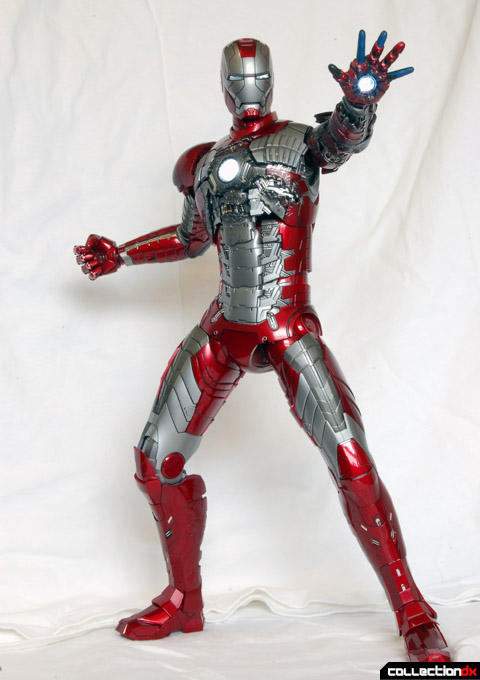 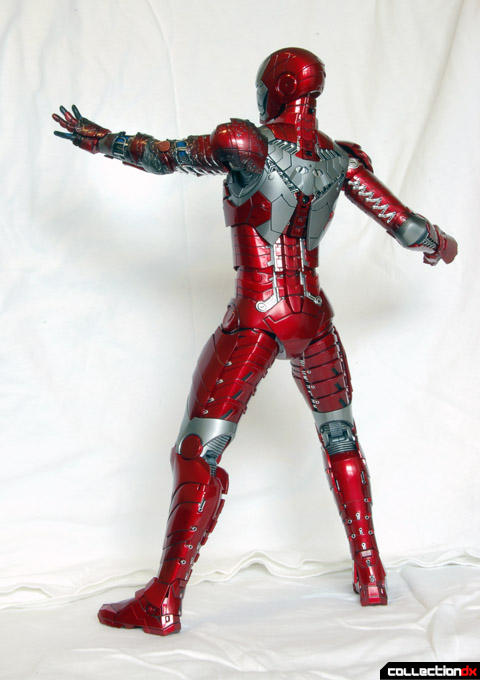 Once everything is assembled and secure, the battle damaged Mk V is sublime.  The already super-detailed suit is made even more impressive with the damage parts.  The damaged arm is a work of art, featuring flawless paint and incredible detail.  You can see the blue of Stark’s racing suit exposed in a couple of places, and on the gloves. 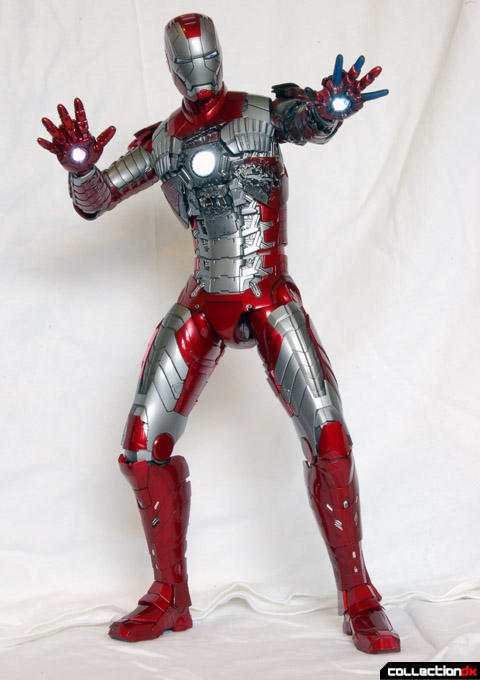 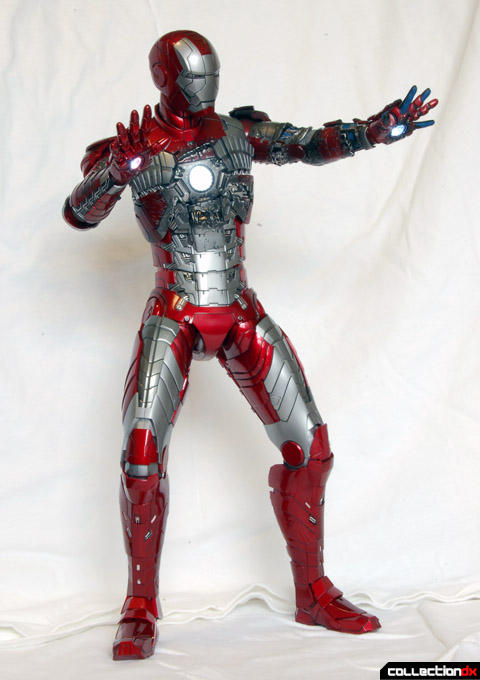 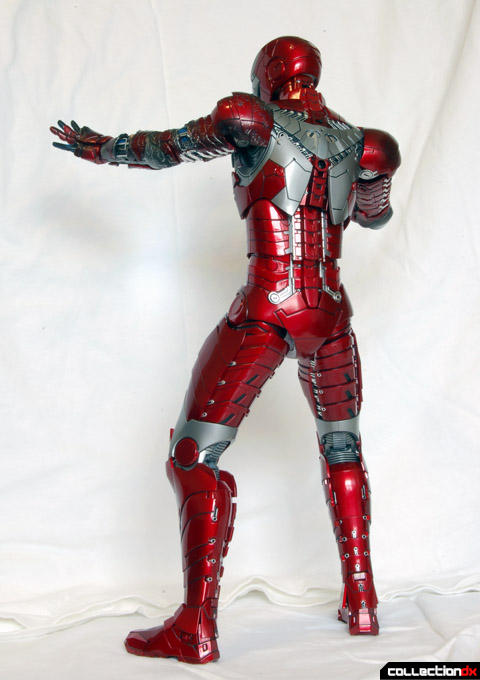 Even more awesome is that the battle damaged arm also features the light-up repulsor, even though I doubt it would still even work after all the damage it has suffered. 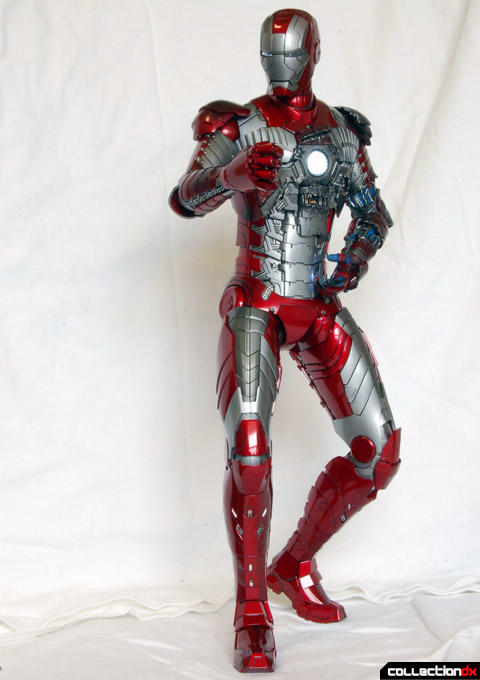 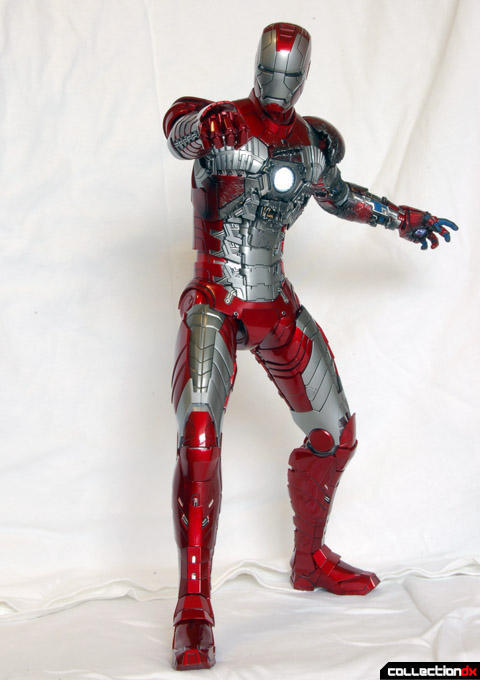 I did not have Whiplash with me when I shot this review, but I tried to take a number of action pose shots to give you guys an idea of how good this figure looks in motion.  I will be sure to update with a couple photos of Iron Man and Whiplash together when I am home. 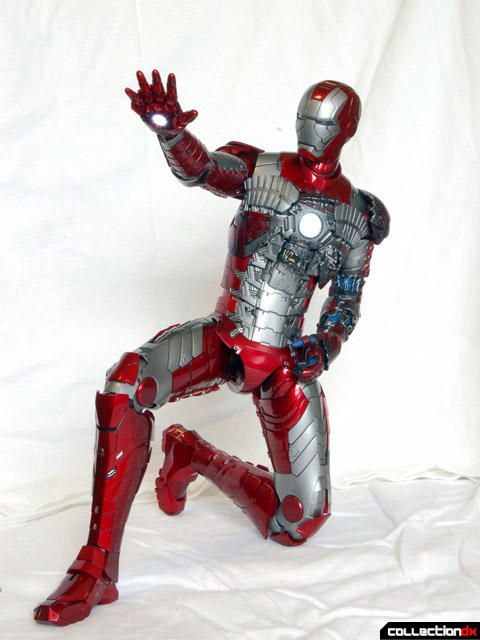 Iron Man Mk V cannot do the ‘poster pose’, but it can kneel! 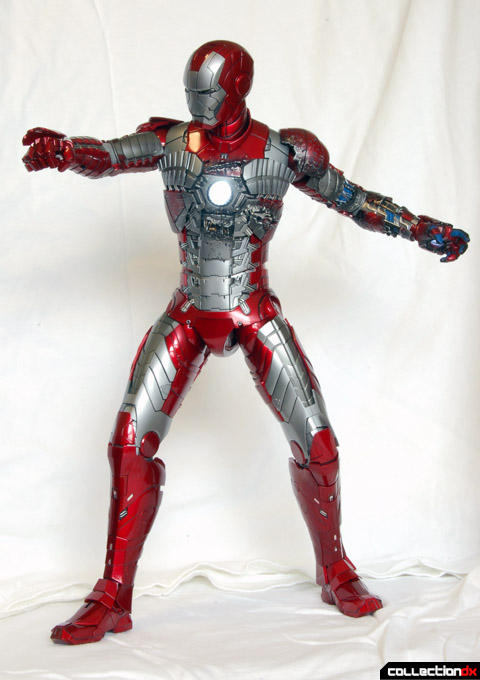 Iron Man Mk V retails for a little over $200, which is a lot.  I experienced a couple of minor problems with mine, but they were not the end of the world.  Still, for such a premium price, there really shouldn’t have been any issues, but they were likely isolated, as I haven’t heard anyone else having the same problems.  If the previous releases are any indication, the price on this figure will only go up once they are out of stock, so if you are thinking about grabbing one, get it from a retailer before they are all gone.

2 comments posted
The handcuffs are for Pepper,

The handcuffs are for Pepper, you see.