Wall-E was a great movie. If you don't agree then your soul is as black as pitch, and you should remain at least 50 yards from children at all times.

Seriously though the movie is really good, as are most pixar movies. Sometimes I think they are the only thing keeping the disney empire alive.

We actually got this toy for my son some time before the movie had come out. He had seen the trailer and then once we were in the toy store he had to have him. But Wall-E didn't get a lot of attention in our house until the movie came out. After I came home from the movie I ran downstairs into the playroom, grabbed Wall-E and stuck him in the photo tent. The movie was something special, and this toy deserved a second look.

The basic premise of Wall-E is that he is a trash robot, left behind on a polluted, abandoned earth for 700 years. There were many Wall-E units at one point, but he appears to be the last one operating. Each day is the same as the next, collecting trash, and creating cubes which are then stacked as high as skyscrapers. Every once in a while, Wall-E comes across a curiosity from the civilization that lived here years ago. Through these items he develops a personality - Wall-E is incredibly curious, and even creates a collection of items that he has come across in his travels.

In the future, a Robot collects toys. Think about that for a minute.

One day, Wall-E's routine is disrupted by a probe ship from outer space. The human race is living on a cruise ship, and it sends out probes to look for vegetation samples, a sign that the earth is ready to be re-populated. One such probe is the little white robot EVE. Wall-E falls in love with EVE, or whatever passes for love with robots, and the story begins there... 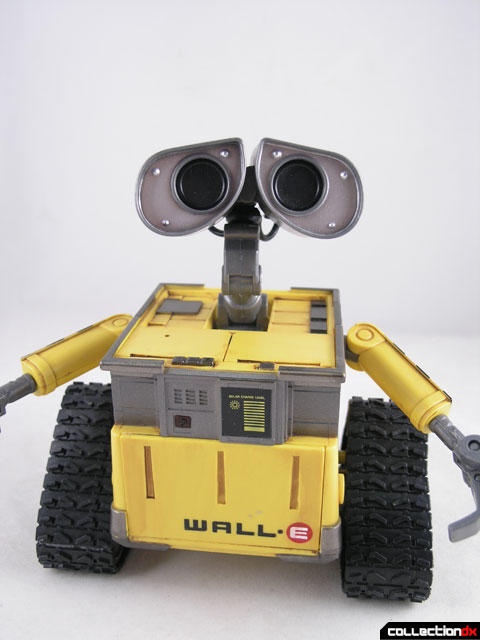 The InterAction Wall-E toy is a voice activated animatronic toy. This means that Wall-E can "hear" you, and will respond with physical motions - head movements and arms flailing.

The toy itself is solid and nicely done. The treads are rubber and roll manually - Wall-E cannot move around on his own. 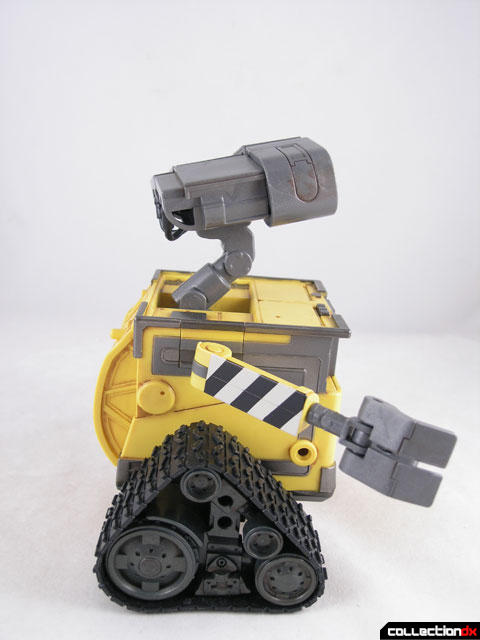 The front panel on Wall-E opens and there is a decal that shows the trash that compacts inside of him. 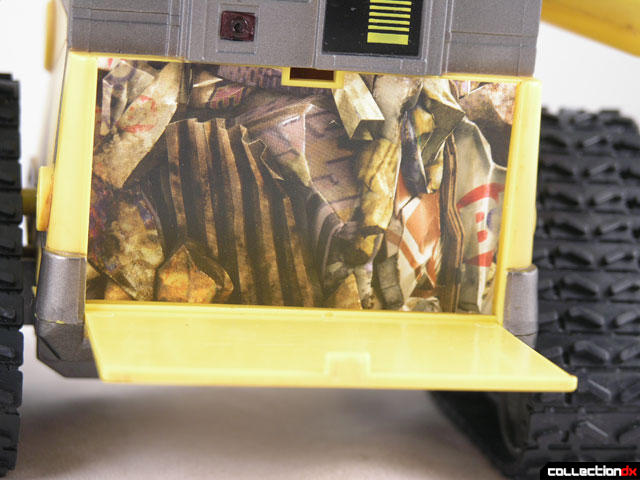 The body is a weathered yellow cube, but not as dirty as seen in the movie. The bulk of Wall-E is here - there are buttons on the top that can activate the lights and sound, as well as a button on the back. On the bottom there is a three way switch that goes from off/try me/on. 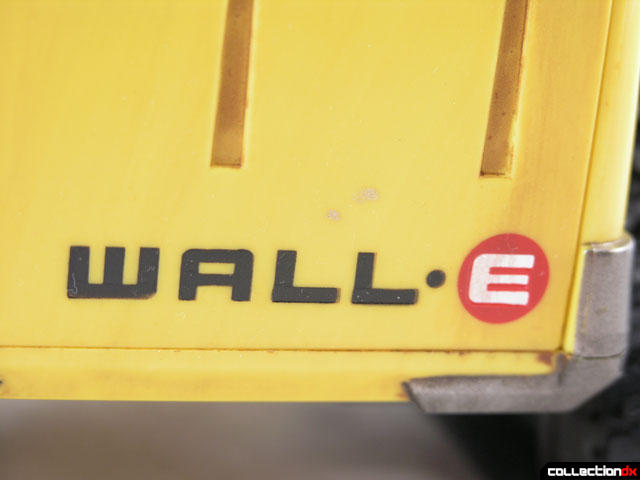 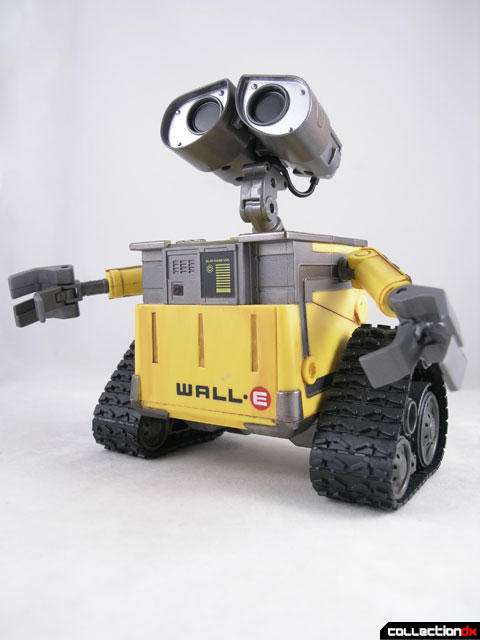 Wall-E's arms are removable and can be repositioned to a spot lower and more forward on the body, however only when they are inserted in the upper holes do they move automatically. Each hand has individual articulated fingers, but not individual finger joints. 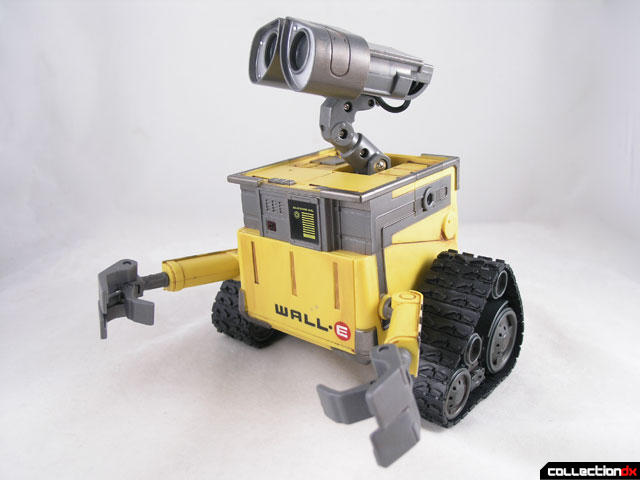 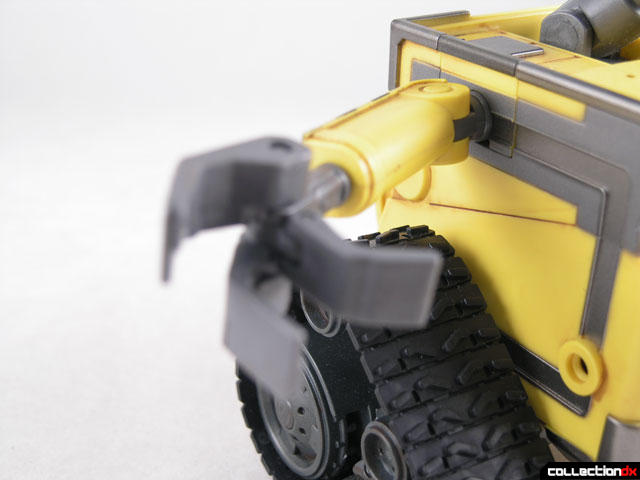 The head has a small bit of movement, but the instructions on the back ask you to not move it because of the possibility of damaging the internal mechanism. I'm sure all those little kids who can't read will pay attention to this. 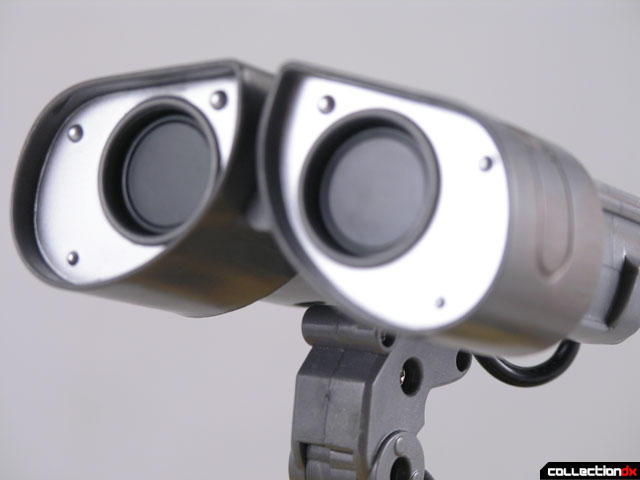 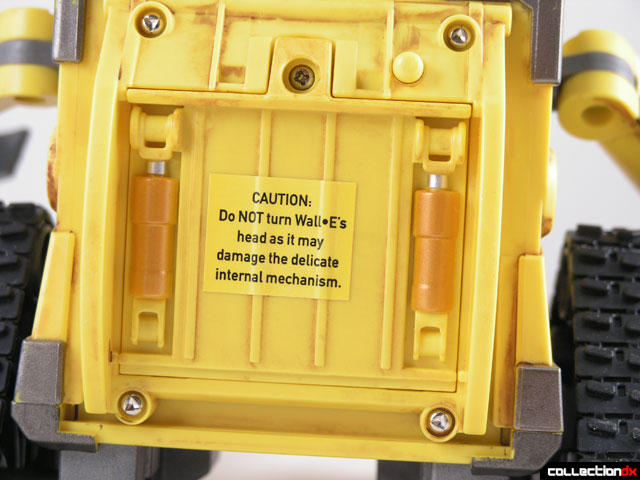 The whole InterAction gimmick is nicely done, and it really makes the toy enjoyable. When Wall-E is in the on mode, he can hear you talk through a small microphone on his chest. You will know when Wall-E hears you because his eyes will light up as it detects sound. A short pause later, Wall-E springs to life. Unfortunately, he doesn't specifically answer you, he just responds to sound in general. 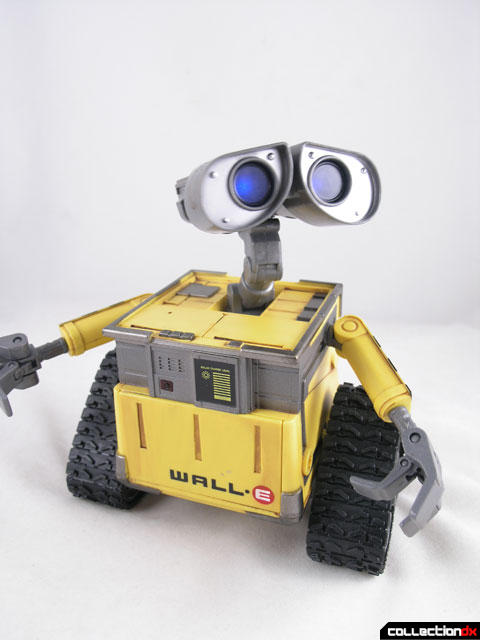 However, should you get the InterAction EVE, the two can babble on and on to each other for hours.

In short, the Thinkway InterActive Wall-E is a lot of fun, for both kids and the adult collector.

I haven't seen the movie yet, but I wanna.

While this review was being put together, I commented to Josh in an e-mail that:

I saw some of those 3" figures, and I'm thinking of getting just the one Wall-E figure where you can takes all his components apart, but he doesn't come with the garbage cube-or-whatever-else accessories.

I saw this movie opening weekend and I have to agree with Josh.. if you can't enjoy this film then you've got problems. Laugh, Cry, Enjoy. Period. Even if you don't have kids of your own its a great film to see on the big screen. A lot of good Sci-Fi References and I'm shocked about how few Pixar cameos there were (noticable) except for John Ratzenberger who's done a voice for every Pixar film. I always half expected Wall E to pick up a Buzz Lightyear doll at one point but it never happened.

"...I always half expected Wall E to pick up a Buzz Lightyear doll at one point but it never happened."

I want a little transformable wall-e..

DisneyShopping.com shows that there is another electronic, motorized Wall-E which is different from this one. While the one that JoshB reviewed here is listed as "Motorized Interactive Talking Wall-E", there's a larger (and more expensive) one called "U-Command Wall-E".

The latter is $59.50, and is slightly larger (by, like, an inch on each dimension) has a wireless remote control, additional movement functions (the motorized binocular eyes tilt up & down), sound and [new] motion-tracking sensors, an expanded effects database, and motorized treads. Anyone here remember those RoboSapiens/RoboSaurus-or-whatever-they're-called that were all the rage a few years back? (I think TRU still carries them?) Same idea here.
It appears, however, that the U-Command can't interact with the Motorized Interactive Talking EVE- which the less complex & smaller one reviewed here can.

Video of U-Command Wall-E below...

(BTW, the woman on the left has the remote control for the robot.)

You can move them manually, they are not automated in that position.