Inferno, the flame man of Mercury

The Outer Space Men have haunted me since my youth. I inherited an OSM Colorforms set from my older brother. The box photograph depicted a grouping of all the original toys (seriously, check this link out), and I spent more time gazing at that photograph and imagining the toys than I spent playing with the Colorforms. I had forgotten the Outer Space Men completely until our own Sanjeev reminded me of their existence. I was disappointed to discover that the original toys were rubber bendy figures and prohibitively expensive rubber bendy figures at that. Imagine my delight when I learned that they were being re-released! By the Four Horsemen! And Glyos compatible!

Each OSM character hails from a different planet or celestial body. Inferno is the “Flame Man of Mercury.” Inferno, like his peers, is packaged on a beautiful retro bubble-card, nicely invoking the character of the original packaging. The bubble is of the “forever mint” style, not permanently attached to the card back. Another welcome detail is the additional bulge at the bottom of the bubble which allows the package to sit upright 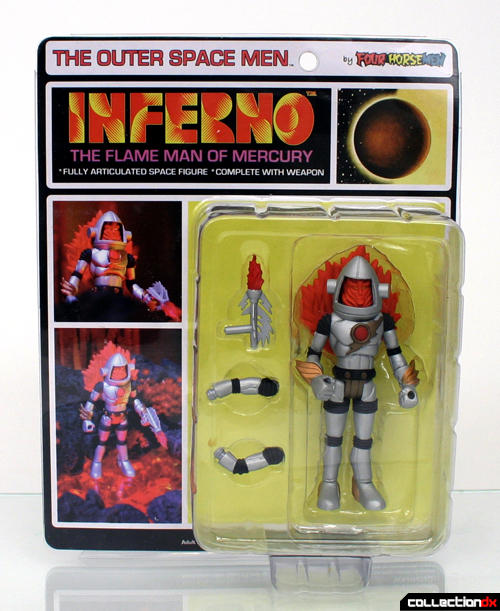 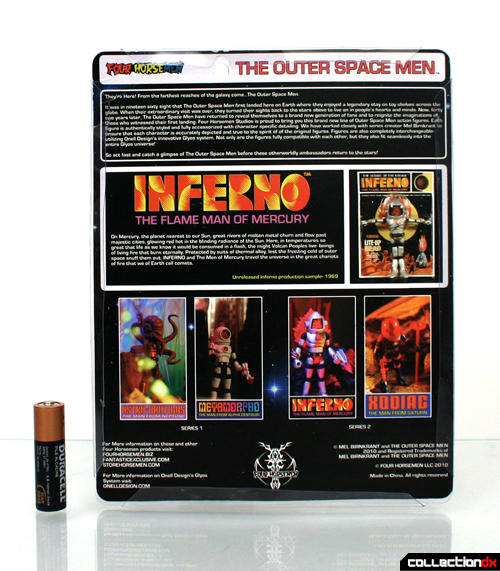 The Four Horsemen have perfectly re-created the feel of the original Outer Space Men in these figures. The sculpting is tight and distinctive. The paint apps are top notch too. Inferno is roughly 1:18 scale, or 3.75”. 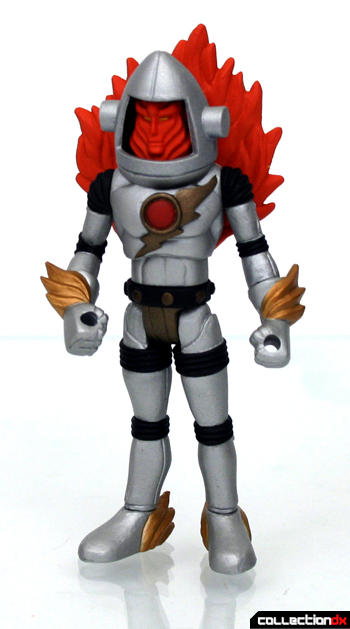 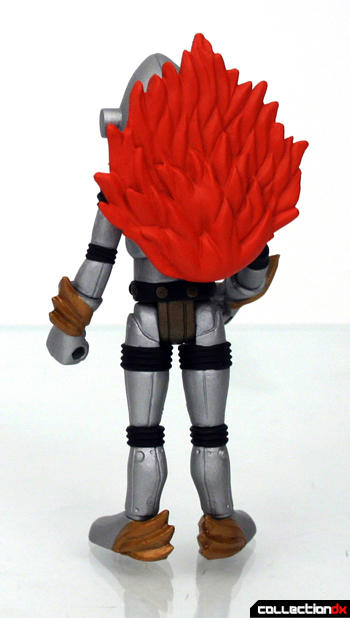 The wall of flames on his back is, of course, remove-able. 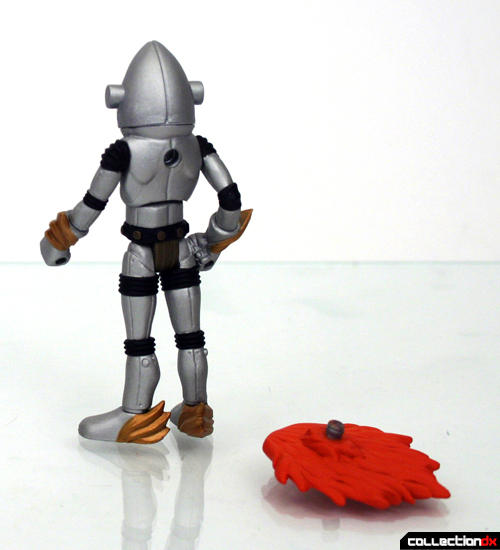 Inferno’s helmet is remove-able as well. 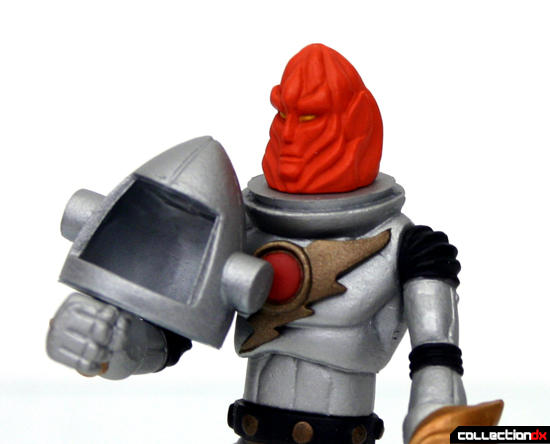 The figure comes with: a flame gun... 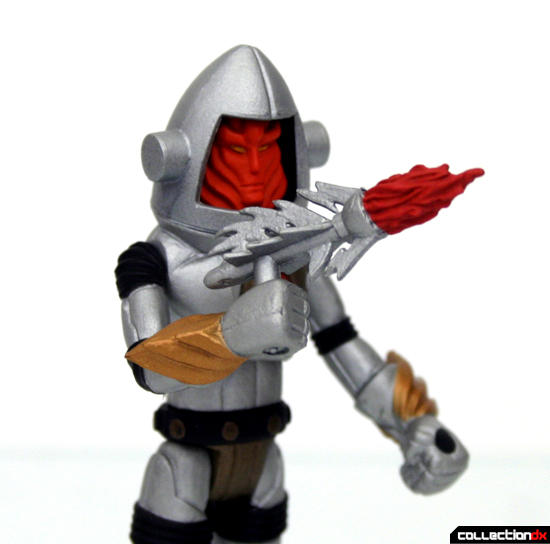 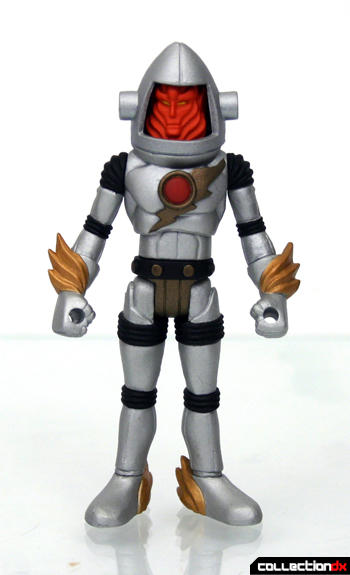 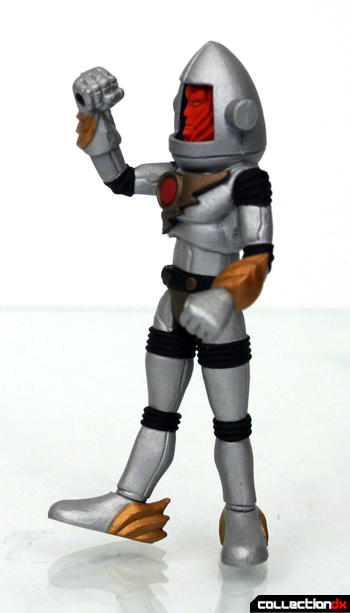 From the legs down, Inferno isn’t particularly poseable. Bending knees would have improved the piece immensely. But the waist and chest joints are terrific. 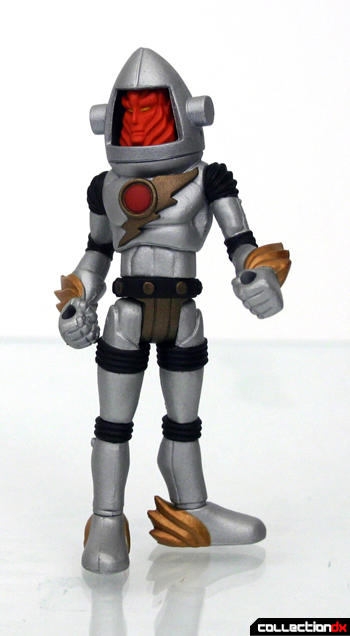 Inferno is a fun piece on its own, but the fact that he is modular and compatible with Onell Design’s Glyos system is frosting on the cake. 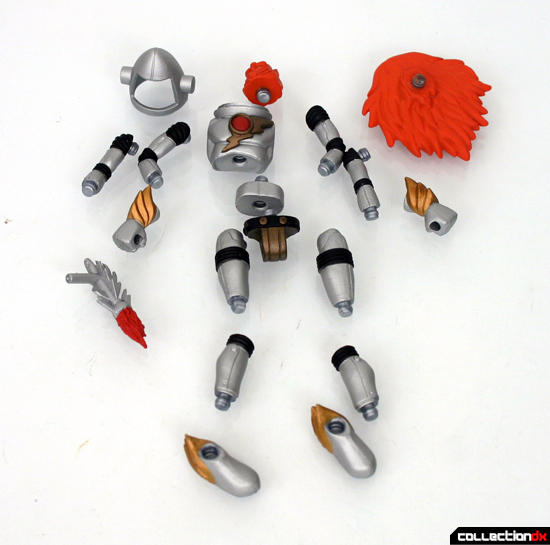 Glyos is pure toy joy, and the combination of Glyos and OSM is toy-nerd nirvana. If you like playing with your toys, these can’t be beat. 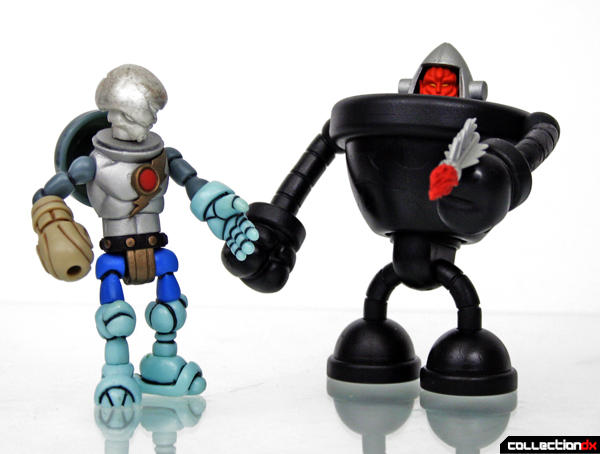 Inferno and The Outer Space Men scratch a very deep itch for me, and I imagine they will for many other adult collectors.

There's also a few variant casts of Inferno and his pals knocking around. Get 'em before they disappear. 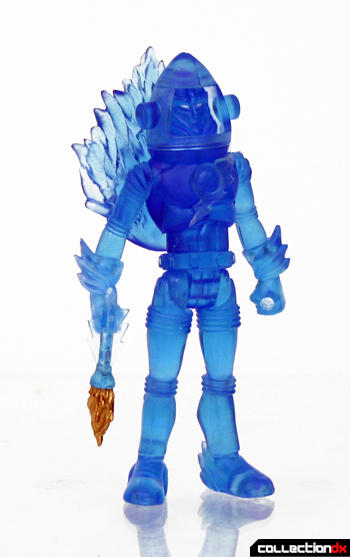 8 comments posted
I can hear the theremin

. "Imagine my delight when I learned that they were being re-released!"
Oh hey, neat.
. "By the Four Horsemen!"
OK.
. "And Glyos compatible!"
Whoa, what?!

I love the thunderbolt on Inferno's chest plate; it's real slick.

Josh alluded to fan antipathy towards the FH in his review(s). All I know of them is their work on MOTU, but it all seems like solid work to me. Why the ambivalence?

I think the antipathy was solely my own, I know people love them and seem to have a huge following. These OSM have made me pay more attention to them now for sure.

I've always had respect for 4H. Their reboot of the MOTU toys was very solid, the MOTU classics are fantastic, and the outer space men have me frothing with joy.

With all due respect, I'd rather not imagine you frothing with joy. Maybe you've been bitten by a wild animal recently?

I've been putting this off and putting it off, but you've finally managed to get me to get off my butt and order these. I've not been terribly interested in any new toys lately, but for the price, I don't see how I can say no. And the "forever mint" packaging, for a packaging snob like me, cinches it.

So cool you're reviewing these. I thought everyone was ignoring them until now.
Last year at the Comic Cons, they release the variant colors, but in bags w/ header cards, not the card and bubble of the regular release.

The NewYork Comic Con set was one of the few things in the whole Con that I was prepared for ahead, and had fun chasing down the vendors that had the exclusive. I believe it was BluFin, and ToyTokyo.
One of those booths had a nice display cabinet with some examples of the original toys, and artwork/ads/posters, alongside these new editions, so anyone could see the history and compare.

Very cool update, with nostalgic style packing art.
Half the size of the originals, but so much more you can do with em!