Transformers The Last Knight came and went very fast, and while it’s relatively small Premier Edition toyline was supposed to do the same, distribution errors now famously plagued many of the figures released for the film, including some of the best ones, like Cogman, the new mold Bumblebee, Crosshairs, and the figure I’m delighted to be taking a look at today, Hot Rod.

This figure is still pretty hard to find, or at least hard to find consistently, but I just got it at this year’s Five Points Fest in Brooklyn, for $35. I do think that price is a little too much, but for a figure that is a little rare, and heavily scalped on the internet, in hindsight, I can’t say I’m disappointed because this figure might not be worth that price, but I’m still really happy with it!

Although is still haven’t seen the Last Knight (and probably never will at this point) I think they kind of wasted this character as Hot Rod, because from what I’ve seen he doesn’t offer too much and his only standout traits are his admittedly awesome gun, and his French Accent. That being said, many Transformers movie characters don’t really live up to their namesake’s in my eyes anyway.

As a deluxe figure, I actually think that Hot Rod offers a lot! Although he reuses a decent amount of parts from 2014’s Age of Extinction Lockdown, there are more than enough unique parts with some different components that make Hot Rod look and feel like a completely new figure when compared to Lockdown, and although I felt like that figure was pretty decent, I really like Hot Rod a lot more. He is taller, has some better arm engineering, has more paint detail, and is more movie accurate than his predecessor, making him an overall better figure in my eyes. The painted detail on Hot Rod is pretty above average, as the majority of his robot mode details are pretty well realized. I really like the contrast between the subtle black and blaring orange, along with the silver I feel like it gives Hot Rod a pretty attractive and cool color scheme.

Hot Rod's head sculpt is a similar story, but I don’t know how to feel about its actual design. He kind of looks like a ladybug, which is a little weird, but the sculpt itself is very well detailed, just like Lockdown’s. My favorite details of Hot Rod’s robot mode are the blue highlights on his face and the new parts on his lower arms. The blue under his eyes really looks interesting and unique, while the additional step of folding the arm panels in half makes them look so much better, I really appreciate that inclusion.

While there’s a lot I really like about Premier Edition Hot Rod, his articulation really suffers. First of all, the arm’s movement is really limited at the shoulder and elbows. In addition to that, Hot Rod’s legs can go forward and back, but only at three set increments each, meaning that their articulation is limited as well. This really negatively affects the figure, because it looks a lot better than it feels to play with sometimes. That doesn’t mean you still can’t put Hot Rod in some cool poses, because you can, it’s just that his articulation is a little more limited than most deluxe Transformers. In addition to that, Hot Rod doesn’t actually come with his gun anyway, which means you might want to have him borrow someone else’s, because I really feel like he looks good in shooting poses! I’m pretty dissatisfied about his lack of a gun, considering it was a pretty cool aspect of his character in the movie. 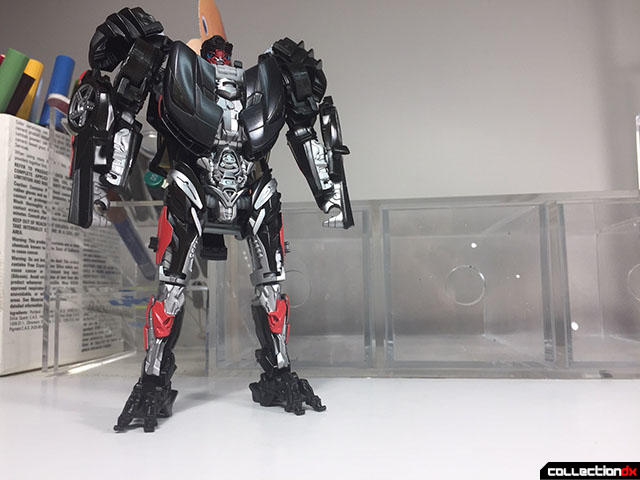 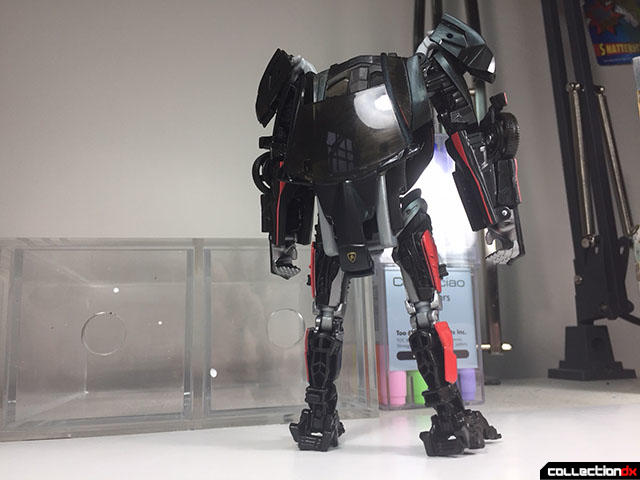 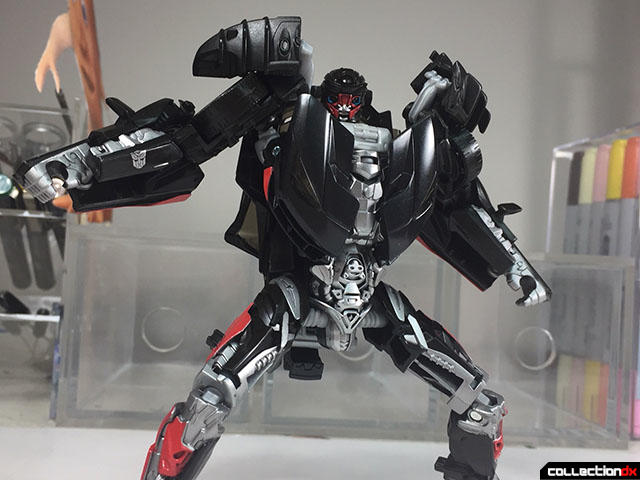 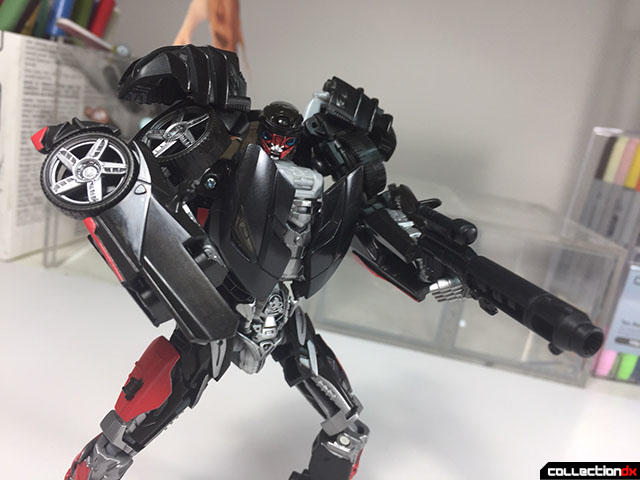 Hot Rod’s height is pretty decent, as he is actually a fair amount taller than his predecessor Lockdown! I really like that the designers did that, especially considering Hot Rod is $20 and Lockdown was only $15. 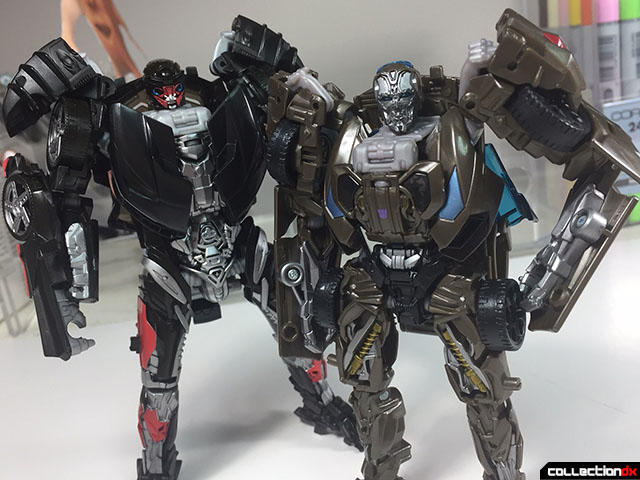 Hot Rod’s transformation is similar to Lockdown, but adds a few intuitive additions that I really appreciate. First of all, as I mentioned before the arms unfold into the doors, instead of just having them on their backs, and side windows fold out from his body, instead of just leaving them off of the vehicle mode entirely like on Lockdown.

Hot Rod’s alt mode is a really great improvement on Lockdown’s, and just a very dynamic looking vehicle mode as a whole. The black paint has a really nice shine to it, and most of the orange trim from the movie is preserved in paint. I really like it! 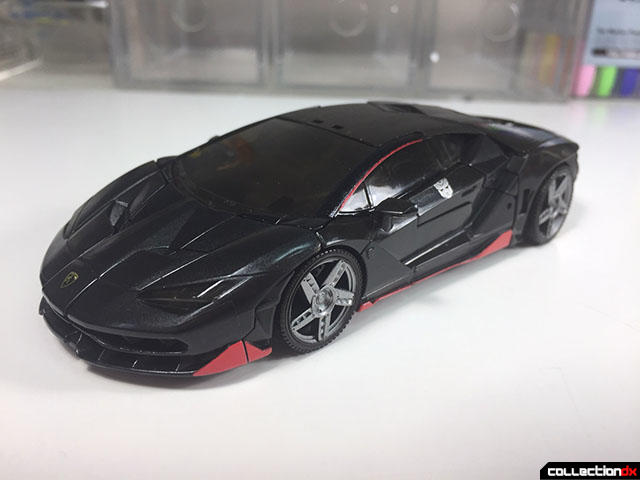 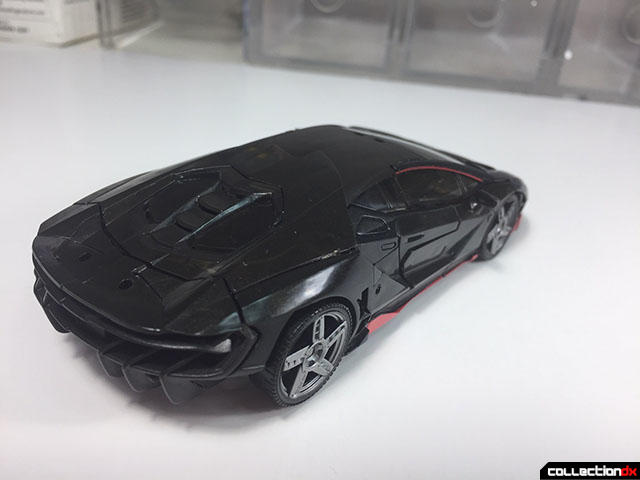 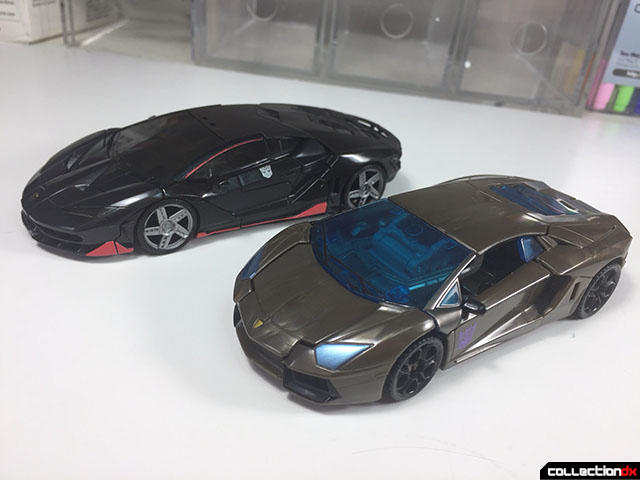 Overall, my complaints about this figure, legitimate as they are, really shouldn’t dissuade you from trying to find one, as although his articulation is limited, and he doesn’t actually come with his gun, Transformers The Last Knight Premier Edition Hot Rod is an above average figure with intricate molded detail, with an abundance of paint apps, that takes a mold that was initially nothing special, and really shows it’s true potential. The numerous engineering additions are really intuitive, and interesting as well, and really serve to make this figure an overall complete improvement over its predecessor Lockdown. If this figure becomes much easier to find some time in the future, I would highly recommend it, but at its current availability and price at upwards of $30, it’s best that you just wait, because make no mistake this figure is worth your time and money, just not at that price.

FWIW, The Last Knight is currently on Amazon Prime. If you're into that sort of thing.

Actually I just watched it last week and uh... y e a h