iGear is an early member of the now massive pantheon of toy companies making unlicensed 'third-party' Transformers toys and accessories.  Their releases run the range from minor add-ons for existing figures (replacement Masterpiece Optimus Prime heads) to the questionable (conehead Masterpiece Seekers based on the Takara mold), to complete original figures (Weapon and Medical Specialist).  Their latest efforts have been a line of updated versions of the G1 Minicars. 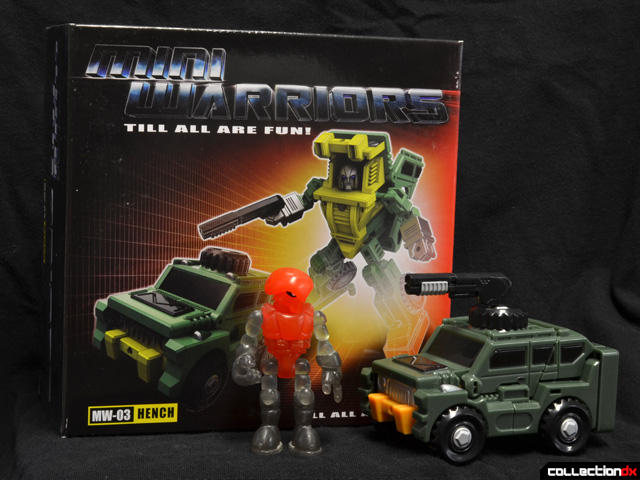 Mini Warrior Hench comes in a nice compact box with sharp CGI graphics.  The colors and layout are evocative of the original G1 boxes, but not direct copies.  "Till all are fun!" is a pretty clever nod to the Transformers catchphrase. 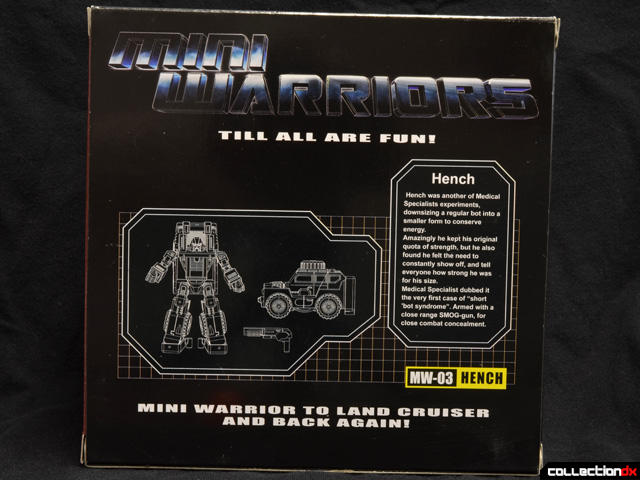 Included in the box are Hench, a shotgun, an instruction book, and a character card.  The back of the box features a bio and some neat looking lineart. 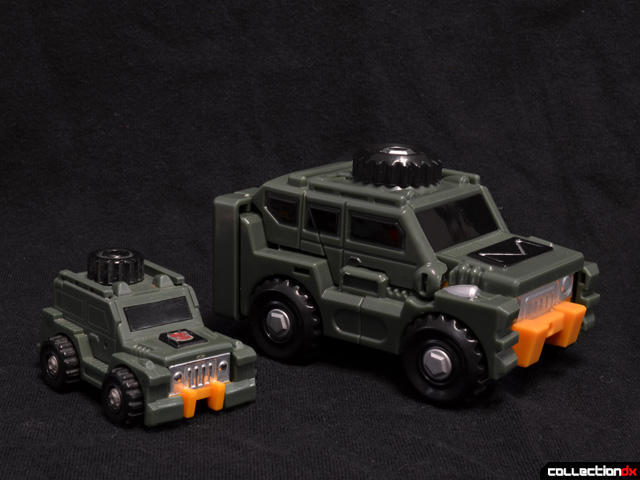 Before we go any further, I have a confession to make.  Brawn is unquestionably my favorite Minicar.  The chunky Land Rover mode is perfect for off-roading and driving through the flower garden, and those chrome arms and door wings give him such a cool silhouette.  Brawn was one of my first Transformers, and I still have that same one. 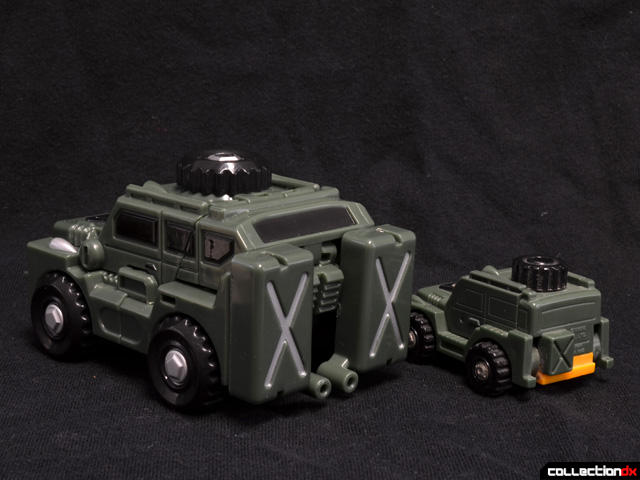 In Land Rover mode, Hench looks incredibly close to the original Brawn's robot mode, albeit with a bit more detail added.  I love how iGear chose to retain the chunky and blocky styling, rather than going for anything more realistic or modern.  The truck mode is compact and solid, with enough locking parts to ensure the wheels sit level and nothing is easily knocked out of place.  Hench even has the 'M' on the hood, hearkening back to Brawn's origin as a Micro Change Penny Racer. 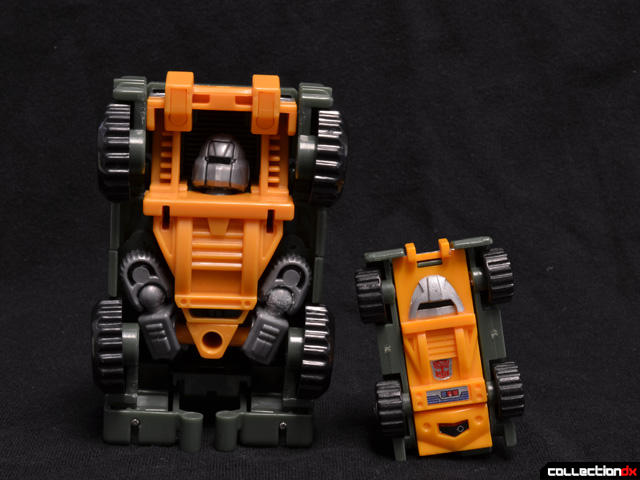 Even the underside of Hench is the same as the original Brawn toy, aside from new transformation scheme considerations. 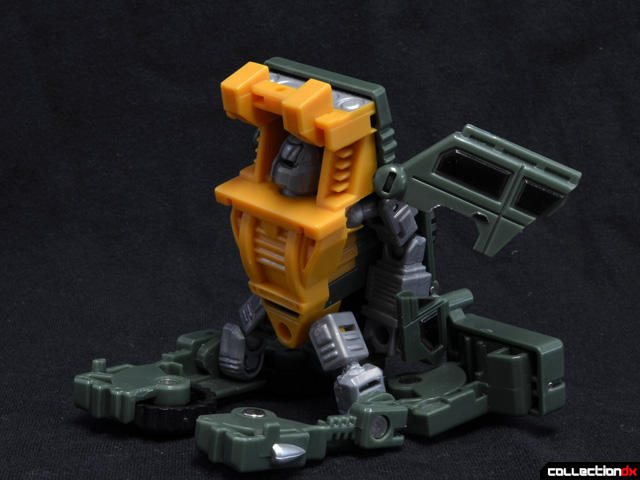 Transformation is where Hench diverges the most from his inspiration.  The basic concept is the same, with the sides and wheel wells forming the legs, the arms coming out of the body, and those glorious door fins.  My biggest problem with the toy, as visible here, is that pretty much every moving part is on a ball joint.  Ball joints tend to suck.  They loosen up over time, and sometimes come from the factory loose.  One of the knees on my Hench was so loose out of the box that he could not stand, and had to be tightened with a little superglue before this review. 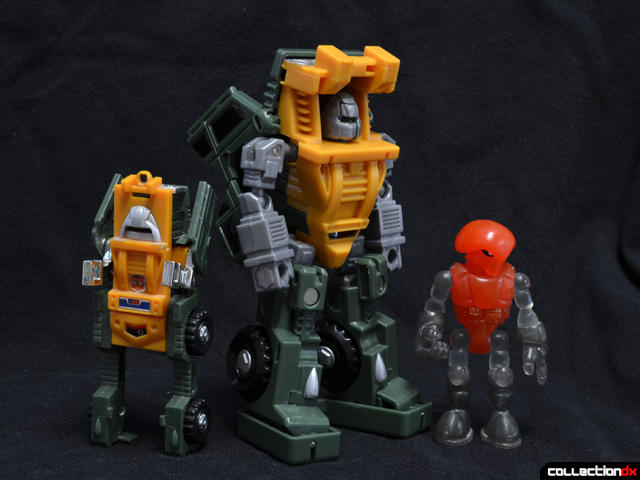 In robot mode Hench stands around four inches tall and has a great meaty feel.  You may notice I switched to a newer keychain release Brawn for robot mode.  My original G1 Brawn is so worn that he barely stands. 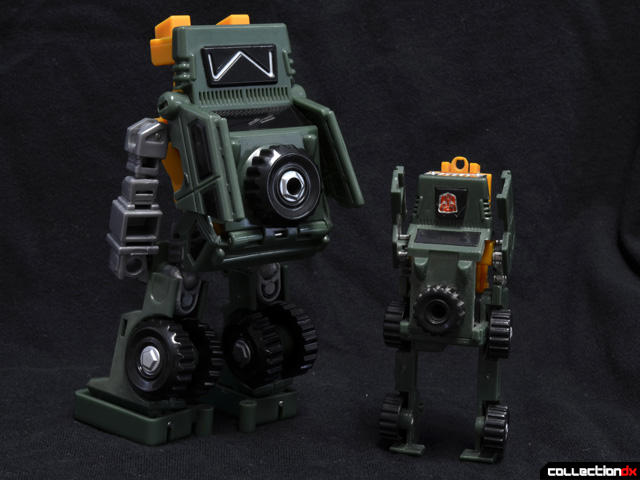 The door wings/fins sit a little differently than the original Brawn toy based on the directions, but since they are on ball joints they can be adjusted to taste. 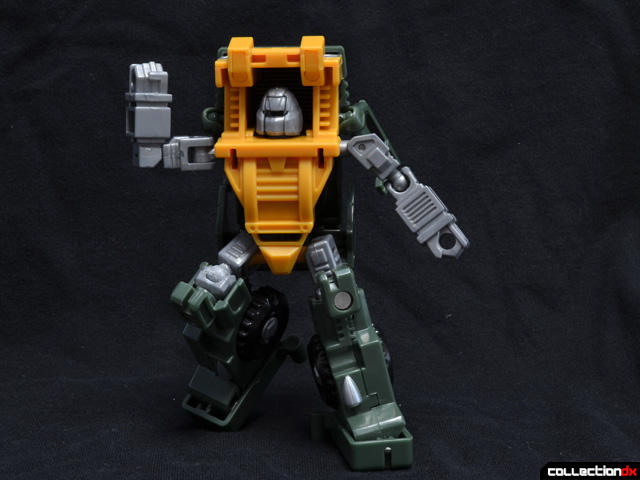 Hench's articulation is solid.  As previously mentioned, most everything is a ball joint so the range of motion is nice.  I really like the hinged feet that can stay level on the ground even in wide-legged poses.  My biggest complaint with this guy is how plain robot mode looked.  Brawn did not have any robot mode stickers besides his Autobot symbol either, but on a larger toy a little more detail work would have gone a long way. 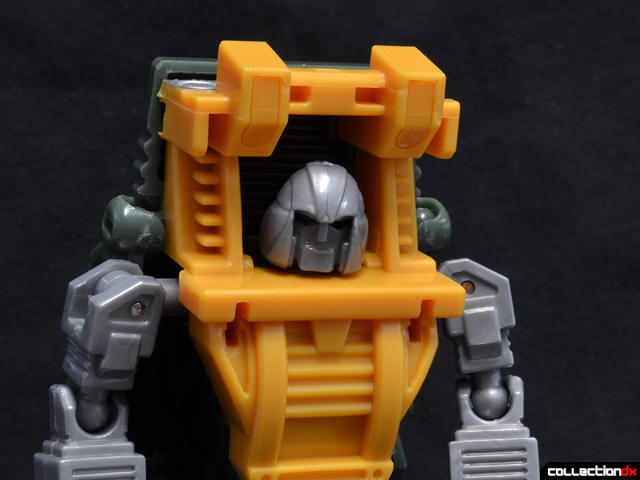 Hench actually has two faces that can be adjusted to taste as well.  One version is cartoon and comic accurate with a real face, while the other is the far superior toy-accurate visor version.  There is only one right choice when given these two options, as the human-esque face is a bit terrible.  I should also point out that the neck ball joint was so loose that Hench could not look down.  He had a neck like a newborn, and I had to tighten it with superglue. 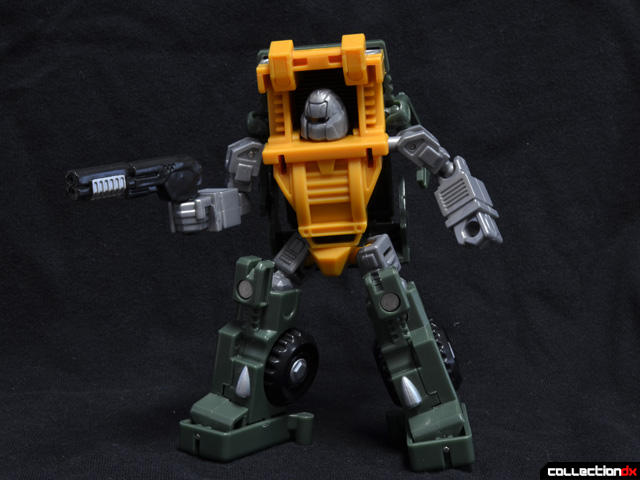 As a Minicar, Brawn did not come with any weapons.  His '86 repaint, Outback, was actually the only Minicar to come with a weapon, but I try not to think about Outback much.  Hench, on the other hand, comes with a solid looking little shotgun.  The weapon fits snugly in either hand, as well as in the spare tire for vehicle mode. 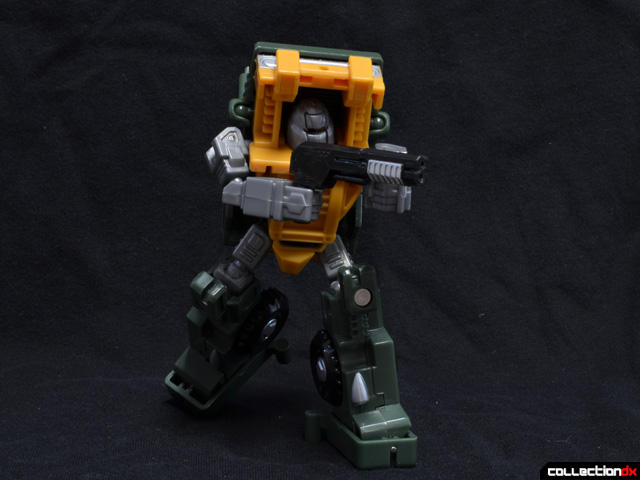 Hench is articulated well enough to fake a two-handed grip on his gat, and can pull off some nice run-and-gunning poses.  I always dug Brawn's funky claw hands and bio about being able to lift really heavy things, but a shotgun seems like a fitting addition to such a diminutive bruiser. 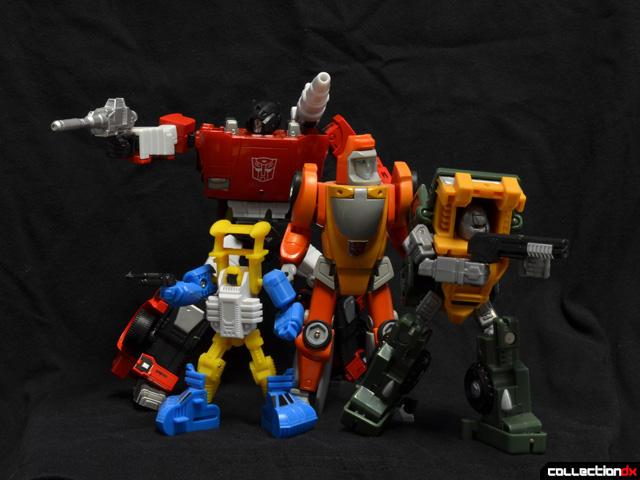 Being GeeWun as all get out, Hench fits in perfectly with other super-G1-ey third party releases, as well as one of the most slavishly G1 official figure released yet, Masterpiece Sideswipe.  The not-Seaspray in this picture is iGear's earlier Mini Warrior Spray.  With the release of Hench and his wave-mate UFO (not-Cosmos), iGear has shifted the scale of the line to be much larger while still retaining the Minicar aesthetic.  I think it's a turn for the better, as I was a bit lukewarm towards the fiddly Spray.  Hench can be picked up at your favorite retailer that carries third-party Transformers for around $40.  He's a bit smaller than a Deluxe-class Transformer and pretty simple, but the plastic quality feels great.  Aside from the two loose joints I could not be happier with mine, and am thrilled to have a new fully articulated rendition of my favorite little Autobot.