I admit that I have not read Popbot yet, so I cannot talk about the story. Instead, we can focus on the reason you’re really here: the toy! In the Popbot universe, the Tomorrow Kings are genetically modified and cloned warriors. The first Tomorrow King releases were all armed with katana, and lightweight clothing that allowed them to really move and take advantage of their weapons. The second wave of figures, the Heavy Tomorrow Kings, is equipped with much more gear, and a massive anti-bot bazooka. Heavy Tomorrow King Soh was the retailer exclusive version. 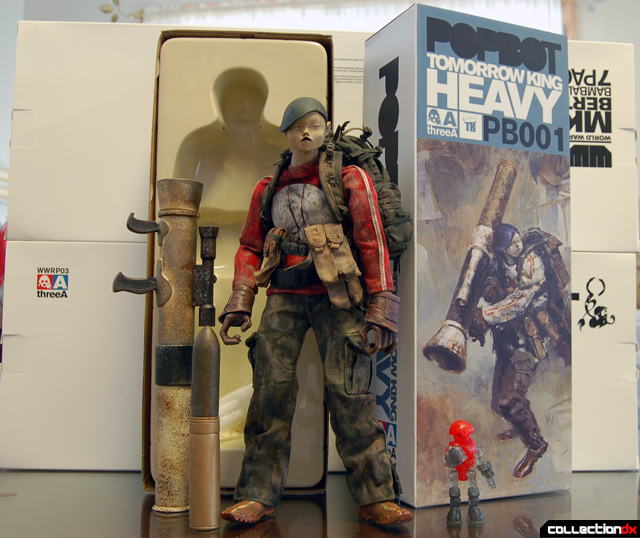 Heavy Tomorrow King Soh comes in the usual 3A 12” figure box, with striking black block lettering and graphics on a white background, with Ashley Wood artwork on both the front and back. The box is two parts that slide apart, revealing the figure nestled safely in a vacu-formed plastic tray, with pieces of plastic wrap keeping anything from making contact and chipping during shipping. The accessories are in plastic baggies underneath the tray. 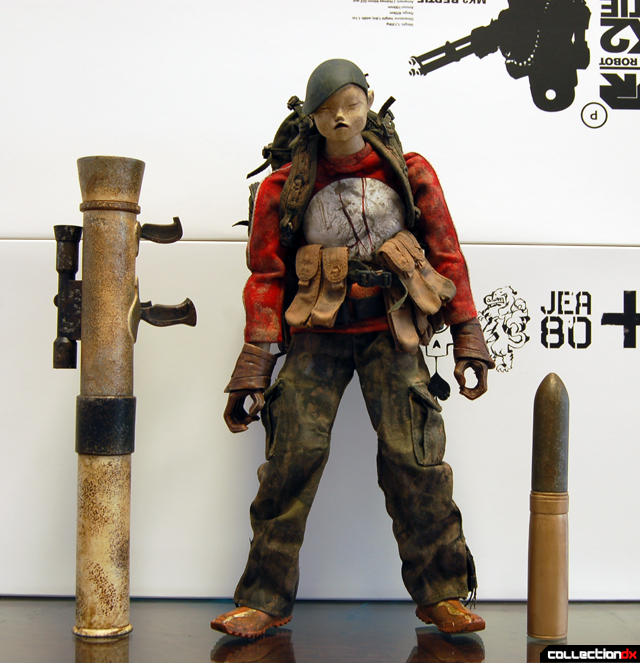 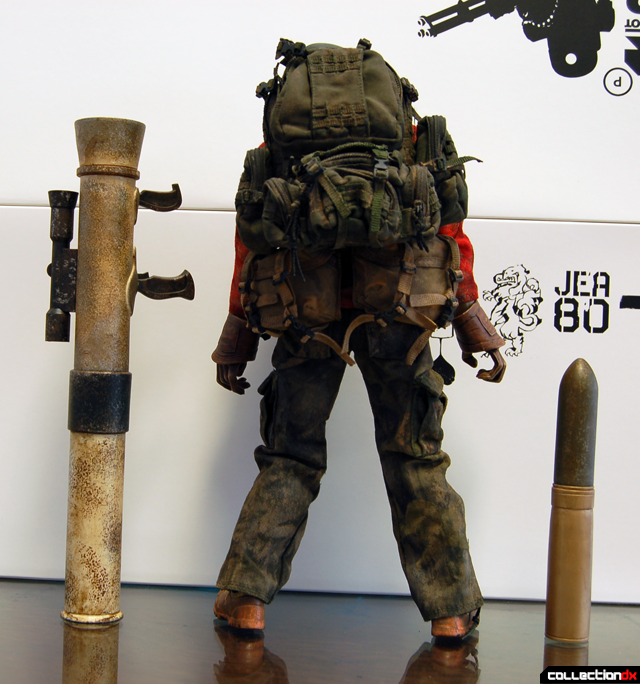 Taking the figure out of the box, you are presented with: 12” Soh figure, large backpack, bazooka, and anti-bot shell. The 3A 1/6 figures are based on the Hot-Toys style bodies, which means they have the most articulation of any 12” figures on the market, and are quite durable. I have not counted exactly how many joints the body has, but I will point out the best parts:
- Two-point abdominal joints
- Mutliple joints in shoulders, including lateral shoulder-blade motion
- Double-jointed knees and elbows
- Double-ball-jointed ankles
All of these points of motion combine to make a figure that can take any pose you can think of. The double-ball ankles ensure that the figure is as stable as can be, which is important when the bazooka and all that gear make the figure a bit top-heavy. 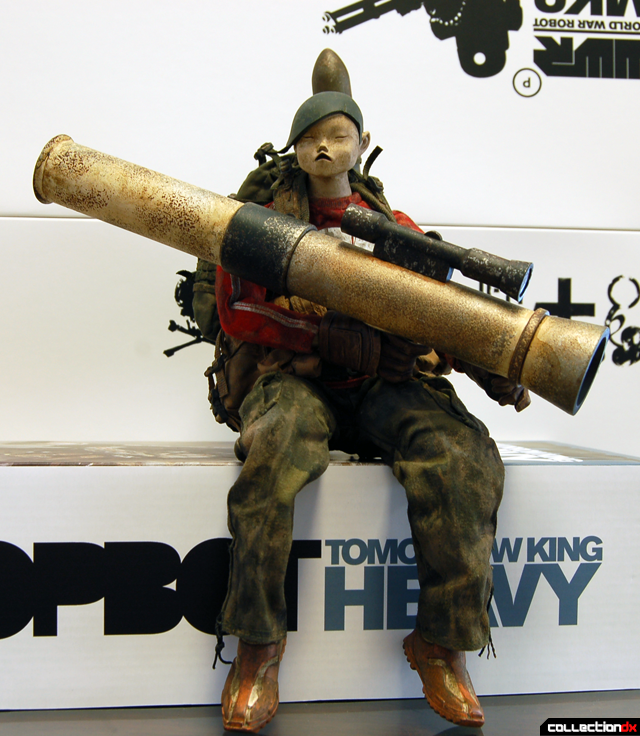 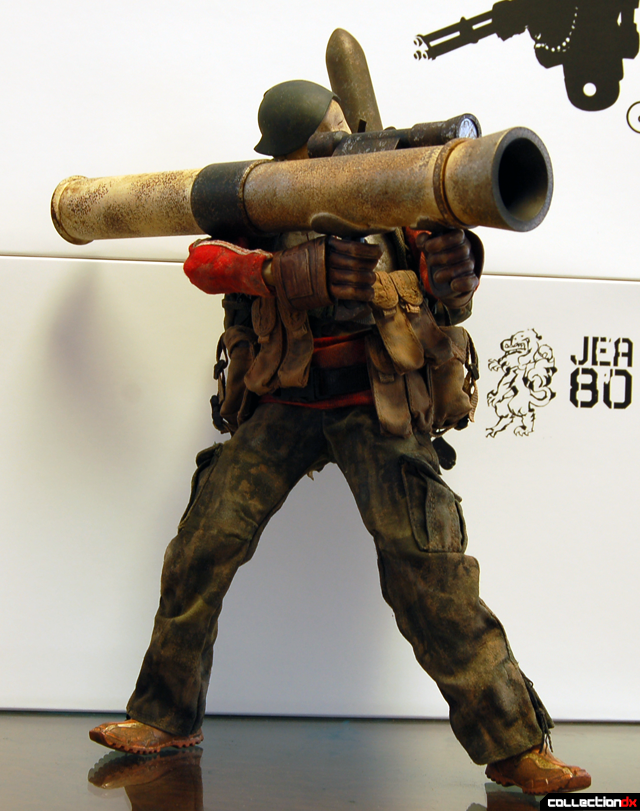 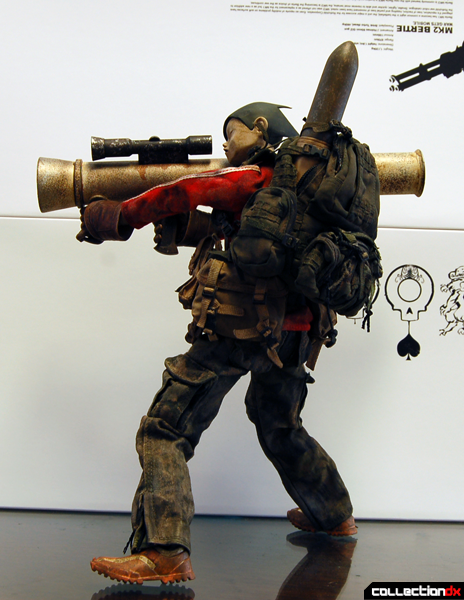 The headsculpt resembles Ashley’s comic artwork, rather than trying to be a realistic sculpt. I think the comic-book illustration style of the head and hands makes a much more interesting figure than if they had gone for ‘realism’. The problem with realistic sculpts is that, unless they are perfect like Hot Toys movie releases, they look off to me, and make the figure look much more toy-like and less well made. Soh has very Asian-influenced stylized features, and the swept-back cartoon hair is made from a soft material so it won’t break. 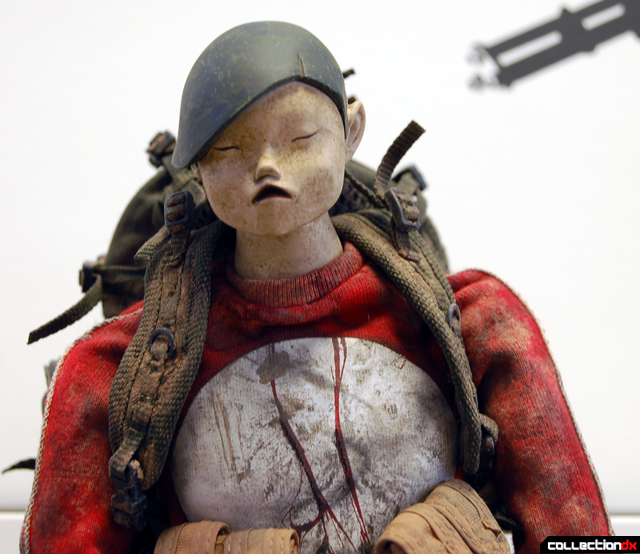 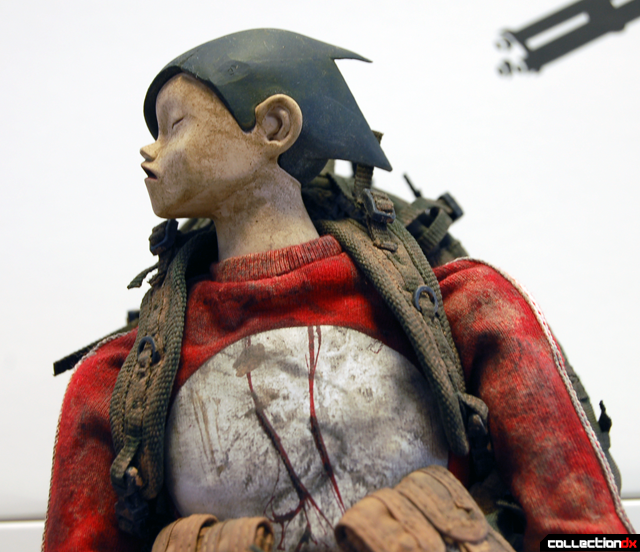 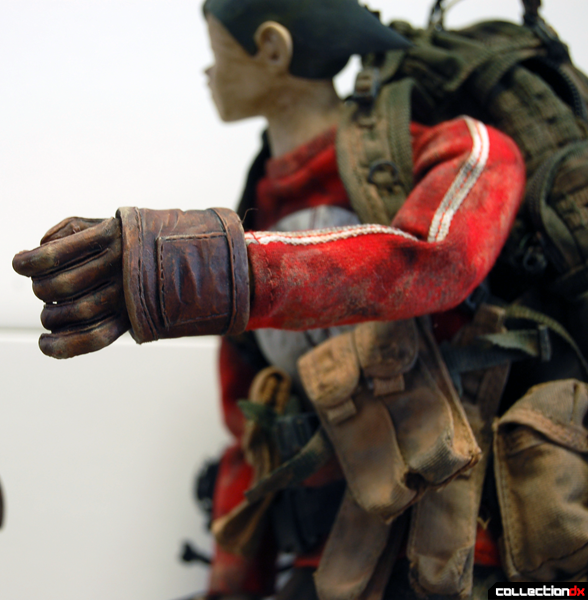 The outfit for the Heavy Tomorrow Kings features bulky cargo combat pants, a belt loaded with equipment and ammunition pouches, and a combat-pack with even more pouches, including a removable ‘butt-pack’. All of the pouches have workable clasps and can be opened. The big pouches like on the backpack are stuffed with some foam to bulk them up and look full, but you could easily find your own 1/6 gear and go to town loading Soh up with equipment. Additionally, each Heavy Tomorrow King wears a long-sleeve shirt with printed graphics. Soh features a red shirt with white stripes on the arm, and a slightly more ‘conservative’ graphic than the direct-order versions. The figures also feature molded combat-sneakers and big, bulky gloves that offer a great deal of wrist protection without having a big impact on articulation. 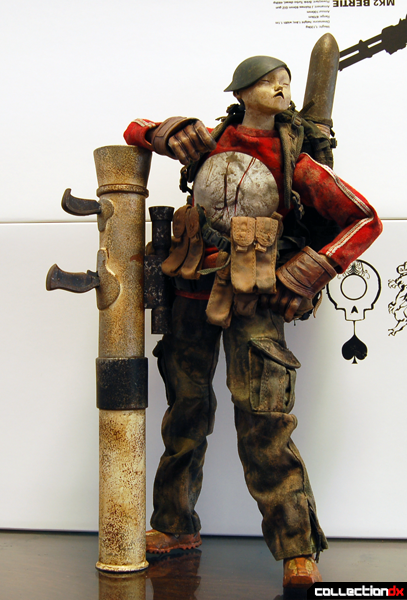 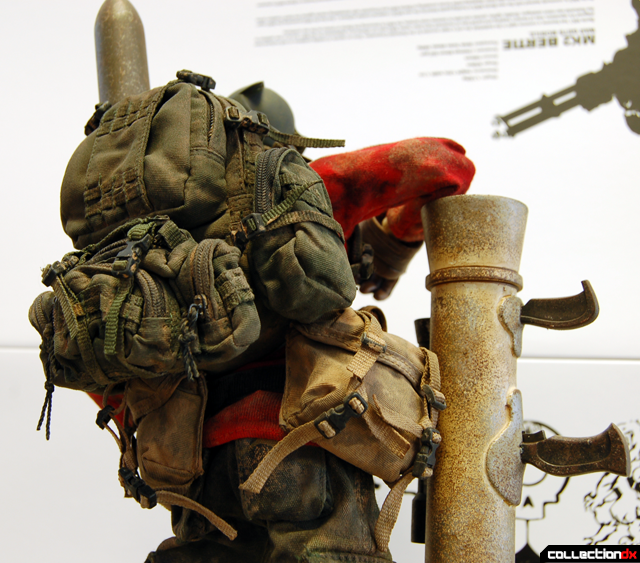 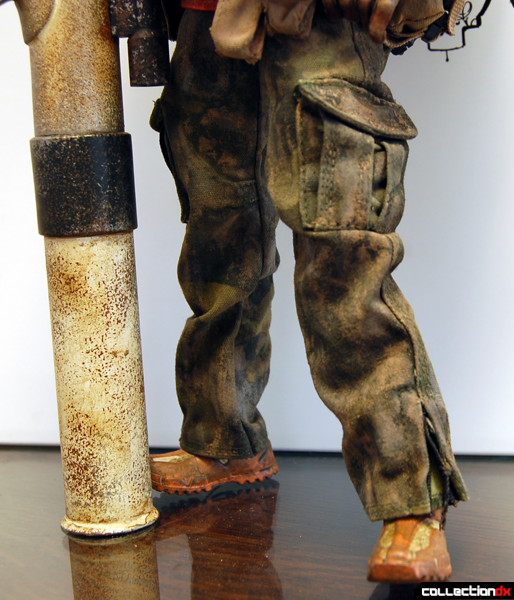 The bazooka features two hand grips, and fits nicely into the soft-plastic gloved hands. The gun is massive, but fits right over Soh’s shoulder, and the figure features all the necessary articulation to look like he’s really ready to let a rocket go. The large shell cannot actually fit into the bazooka, but you can pose Soh like he’s loading up another shot, or store the shell in the backpack as I have. 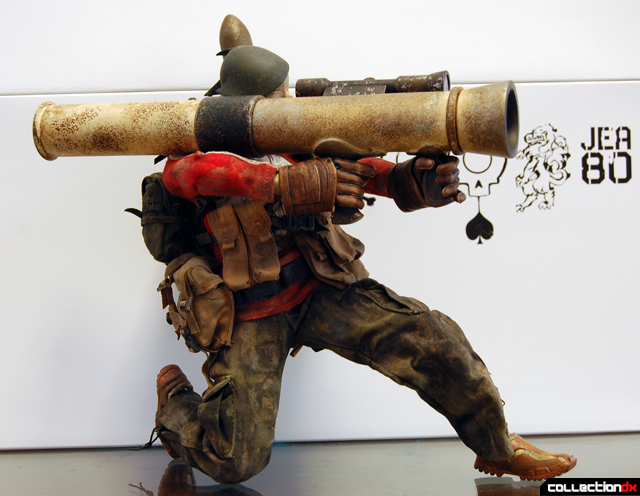 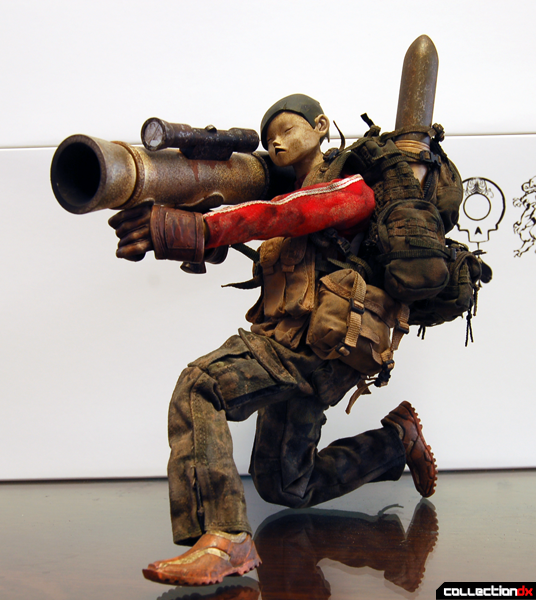 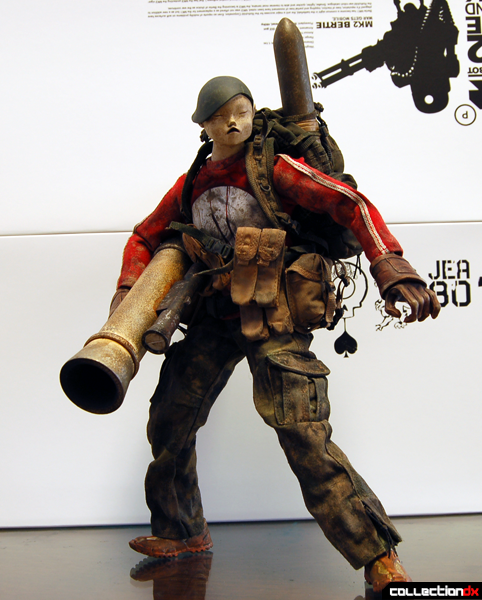 The detail, articulation, and finish all come together to make Heavy Tomorrow King Soh an amazing 1/6 scale action figure. The comic-style details and hand-painted finish give the toy a very high-quality feel. Soh only recently sold out from most retailers, but can still be found on the secondary market for around retail of $120, so if you’re interested, don’t pass this figure up! 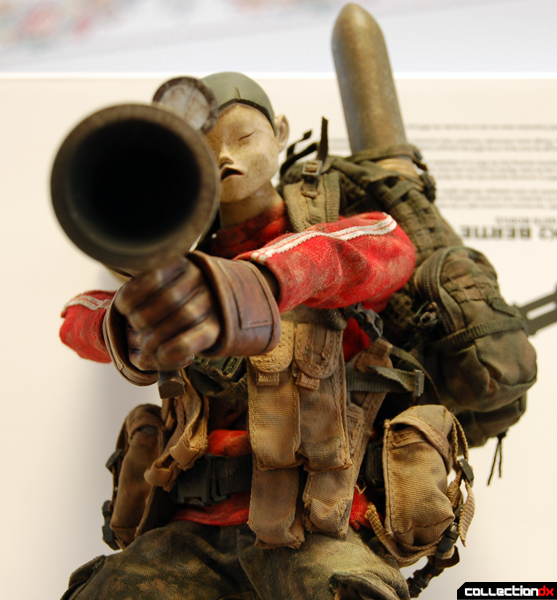 Saw this at the micro summit. Amazing detail and great style. I assumed this toy cost a lot more, it seems like a good deal for 120 dollars.

I also saw it at the micro summit and it blew my mind how intricate the backpack and belts were. Probably the most detailed I have ever witnessed with my eyes. The weathering is top notch and as you can see it photographs very well, a lot of care went into making this figure. I dont think the asking price is unfair seeing as you get a well built figure

Glad to see a review of this. Looks really cool, but not something I would spend that kind of money on. The 6 inch versions though... Maybe!

Hi guys i recently discovered these figures, but they are hard to acquire. Can someone give me information on how to buy these....I am not looking for a source like ebay.