I won't get into the whole third party talk as this seems to stir up a lot of controversy, so let's just enjoy this for what it is. It is a toy modeled after the very popular Devastator. This specific figure is based off of Long Haul from the G1 Transformers Devastator combiner. To really get a grip on this seven part series, I suggest starting off with the Exgraver review which is part one. That figure debuted with some issues which were corrected with this Heavy Labor release. This came with upgraded parts to fix Exgraver. Unfortunately, Heavy Labor is following in his footsteps when it comes to QC issues.

Heavy Labor comes in the same type of box as the first release. 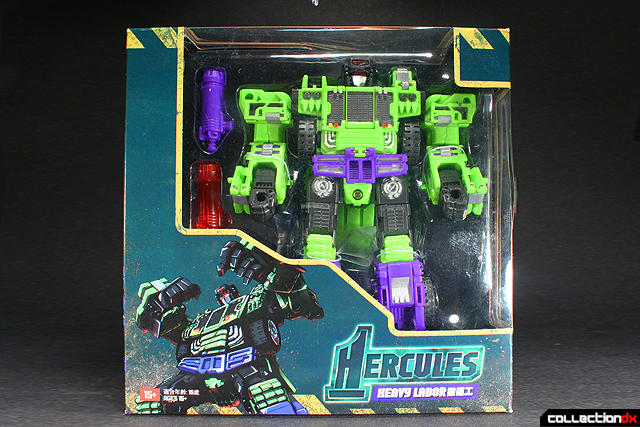 The set comes with a detailed instruction booklet and a spec card. 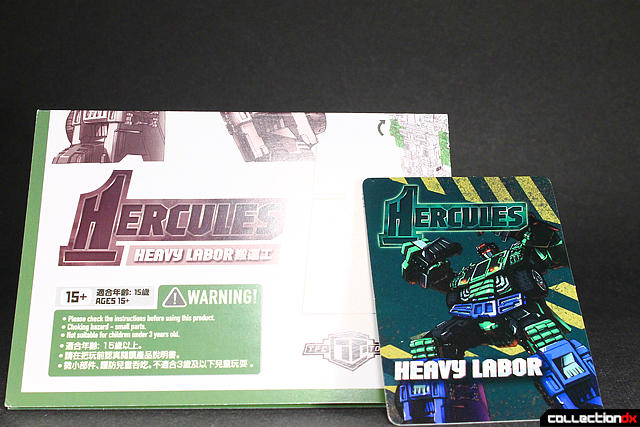 Heavy Labor looks almost like he could be made of Legos. He is very blocky and his CAD heritage becomes obvious. 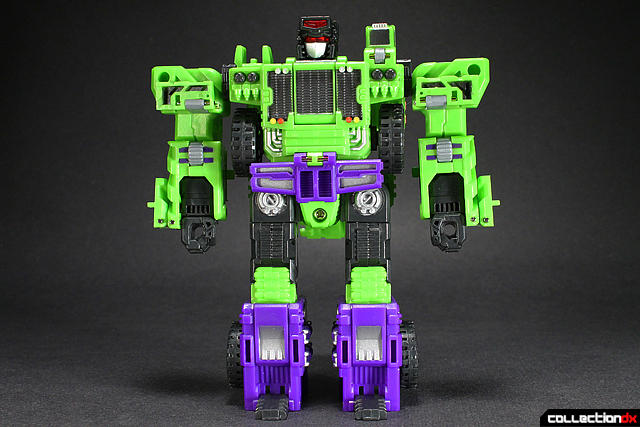 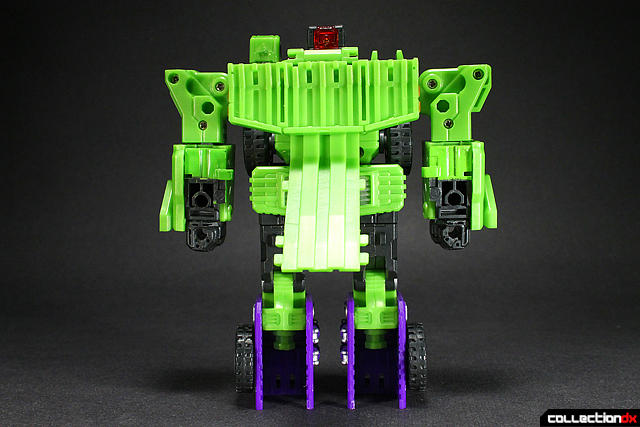 Fortunately, it is a bit more articulated than his blockiness leads you to believe. Note: out of the box, Heavy Labor has plugs on the screws on the front of his crotch which I had to remove. More on that later. 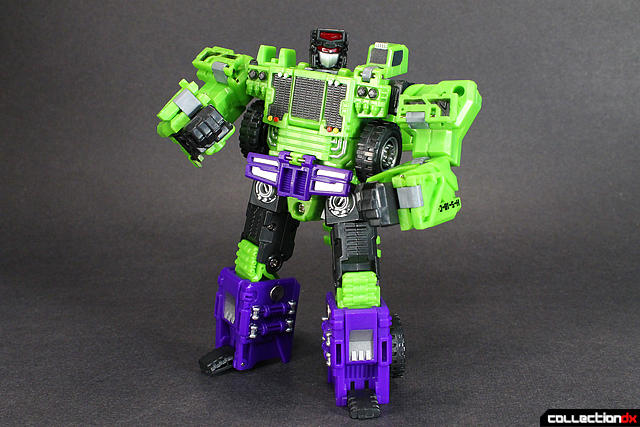 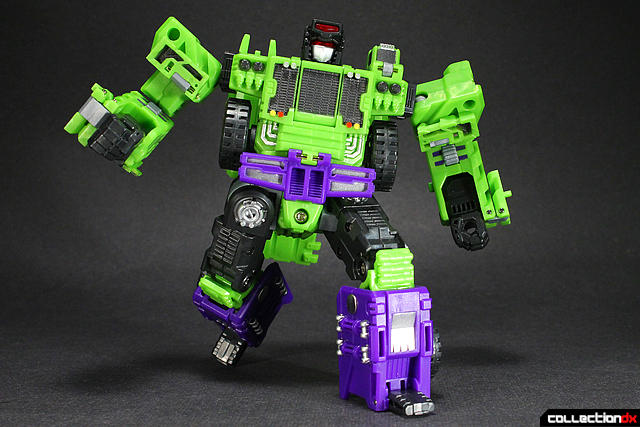 Heavy Labor comes with a clear red and a purple gun. They fit nicely in his hands. Here he is showing off his ability to pull off a kneeling pose. 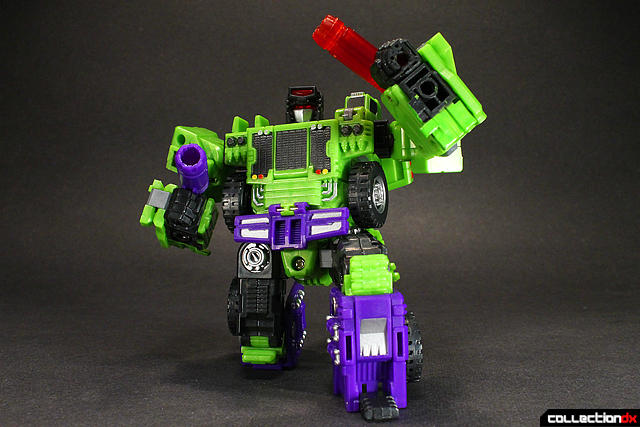 The back of the head has a good amount of light-piping which looks real nice if the lighting is right. 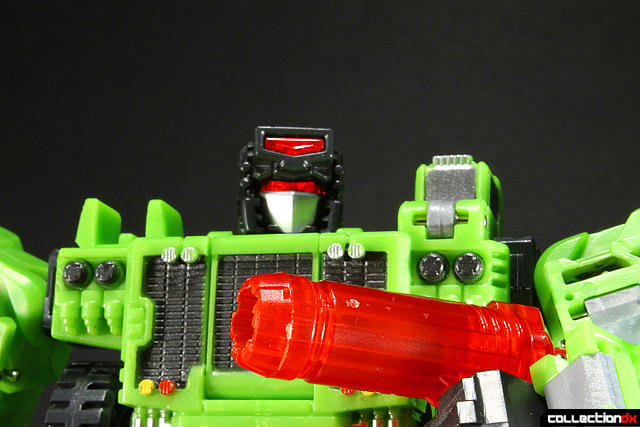 Transformation is rather fun without being complicated. Here he is halfway done. 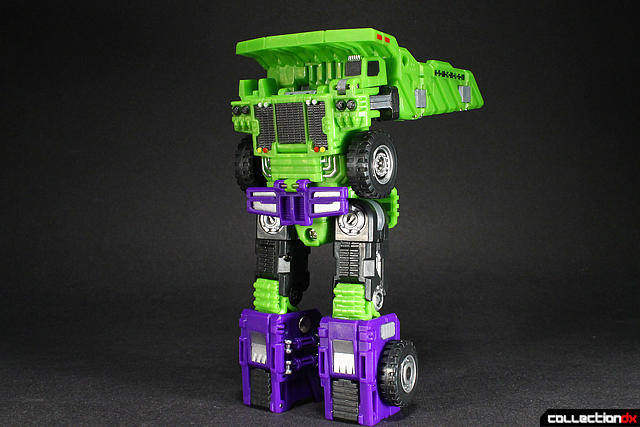 Some Transformers are a bit of the pain for an old geezer like me to transform, but this one is just right. His alternate mode looks really nice and tough. All the robot bits are really well hidden. 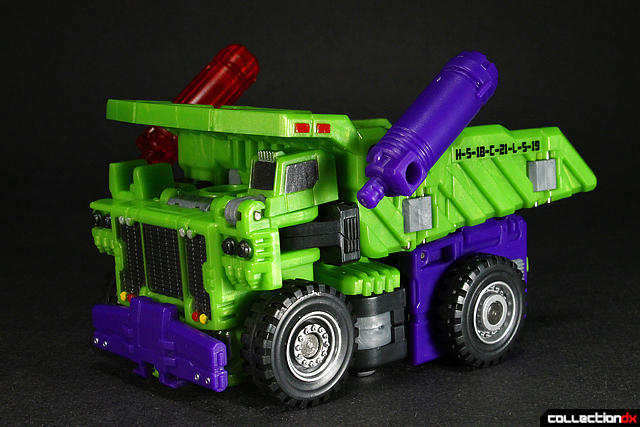 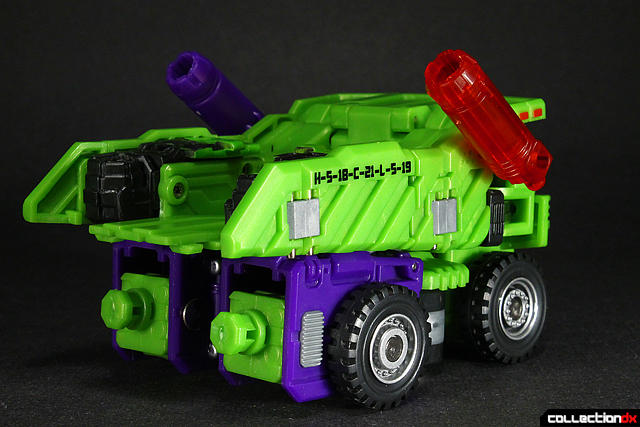 Unless you look at the bottom. Here you can definitely see robot bits. 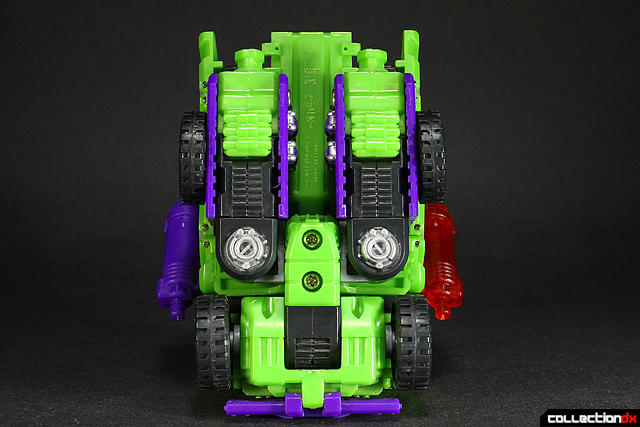 Heavy Labor becomes the torso for Hercules. Here he is ready for combination with his five other brothers. (Edit: The torso has to be spun around so that the "butt plates" become Hercules' skirt.) 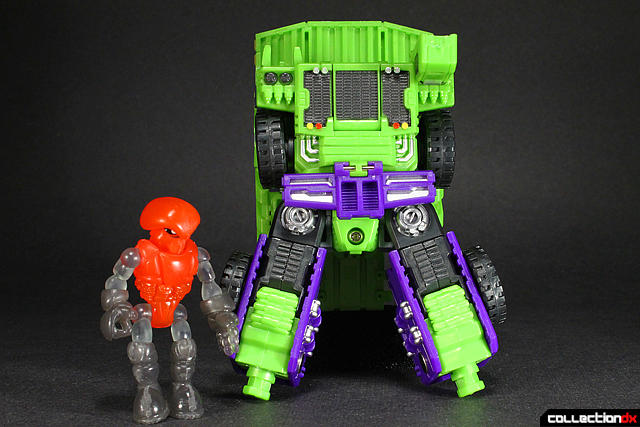 OK, I mentioned at the beginning of the review that Exgraver had some problems for some people. While I didn't have any problems, Heavy Labor came with an upgraded part for it. So now that everyone has their Heavy Labor, a wave of complaints littered TFC Toys Facebook page and Transformer forums. I don't know if they really bother to play with these before they go into full blown production, but I literally broke the hip on mine by clicking the ratchet ONCE. Yes, that's all it took to strip the gear tooth on mine. Had I clicked it more I would have eaten away the rest. It turns out that the gear rubs against an opposing single tooth. The plastic used does not give, so the torque of our strong manly arms pushing against the hard plastic leads to breakage. (There is a fix online for this for those of you that have not posed your figures yet.) The good news is that TFC Toys will be including a replacement part for Heavy Labor with the next release. That's great and all but what if you don't plan on completing the set? I've contacted them and have not heard back as to how they will address this issue for non-completists. I have plans on finishing the set, but I know some other people who may not and it would be nice to know how TFC Toys will handle this.

This is the hip part from the other leg that I didn't break. The gear teeth you see here disappear with each click. I've removed opposing pieces on all the ratchet parts on this figure until I get a fix from TFC. I can deal with a non ratcheting figure, but the ratchets will be necessary when it comes time to combine. 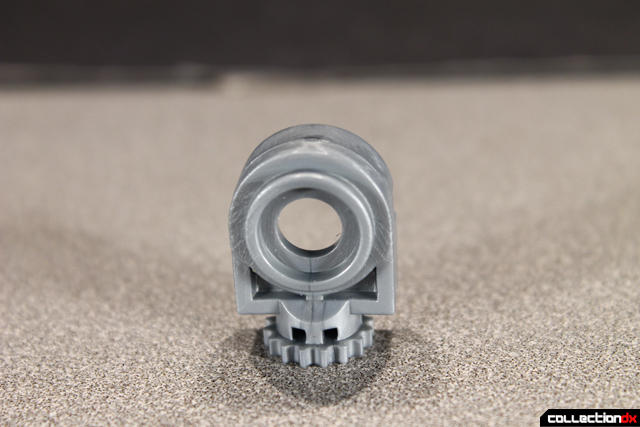 The only other complaint was a slight mis-alignment of the hips which would not allow them to sit flush for truck mode. It was an easy fix for me, but if you've never taken stuff apart, it might be a tad tedious. Part of the difficulty was removing the screw plugs in the crotch which is why the screws are visible on his crotch.

Having said that, the rest of the figure is rock solid, almost literally. The plastics used are top-notch and sharply molded. The pins look real beefy and well put together. Yeah, it sucks for something so well built to suffer from some stupid little problems, but at least TFC takes responsibility and does something about it (as long as you are buying the rest of the figures). I can't imagine they didn't come across this problem at the factory. I'm guessing they decided to release it to get it out on time with the intent of fixing it later on as they did with Exgraver. At least they don't make us have to buy "Version 2.0" like some certain huge manufacturer who makes a certain red and yellow transforming figure that has a trailer with flames on it.

7 comments posted
I'd get this even if it

I'd get this even if it wasn't part of a combiner. It looks sweet!

I might even be inclined to HOLY GOD 100 DOLLARS

"At least they don't make us have to buy "Version 2.0" like some certain huge manufacturer who makes a certain red and yellow transforming figure that has a trailer with flames on it."

No they just make it so you have to buy a separate figure of equal value :3

Plus, if these guys made the figure you mention, it'd cost $500 and then break.

Yup, unfortunately thats what its looking like because they have not reponded to any of my emails. So it looks like the only way to get a fix is to spend another 100 bux

To cut a notch in the little plastic squares to make the ratching mech work again. There is a nice detailed youtube clip up that shows how to fix both problems.

It's a shame that for a 100$ each, they can't iron out the QC problem before release. I'll wait for Maketoy offering. Not only are they cheaper, but if quality is as good as their battle tanker upgrade for RTS Prime it might be flawless.