If there is one thing most superhero movies are good at it's making millions of dollars. And if there's another thing superhero movies are really good at it's casting notable actors in sometimes strange or surprising ways. Aaron Eckhart, known for such films as "Thank You for Smoking" and "The Wicker Man (2006)" made a big impact on audiences with his portrayal of Gotham City's charismatic district attorney in "The Dark Knight". As the story goes, good ol' Harvey would eventually be transformed into the iconic Batman villain Two-Face because this time he wasn't played by Billy Dee Williams.

One of the more charming aspects of movie tie-in toys is getting an action figures of a famous actor. This is especially fun when it's just the person looking like a regular fella without any hint of the vigilante they may have become. Thanks to Mattel and their Movie Masters sub line, you too can own your own little Aaron Eckhart as a 1/12 scale action figure. These types of toys are generally destined for the bargain bin and ol' hothead Harvey was no different.I stumbled upon this figure while perusing the toy aisle at the local Christmas Tree Shop and picked him up 'cause I just love a bargain when it comes to A-list movie stars. 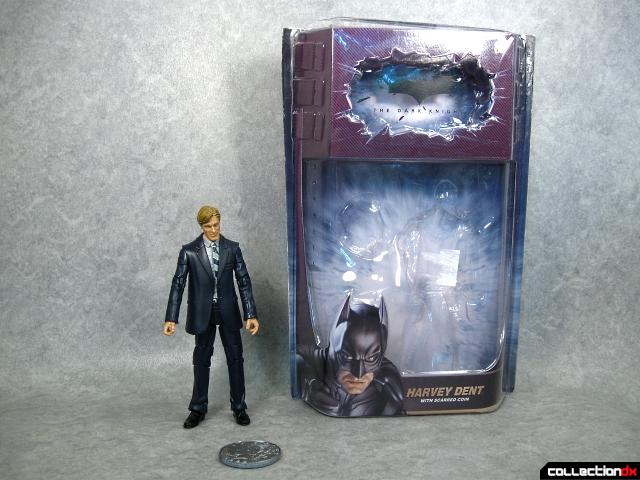 Harvey Dent came packaged on a fairly elaborate blister card that is halfway to looking like a genuine collector's toy. This set contains one Aaron Eckhart and one lucky coin. 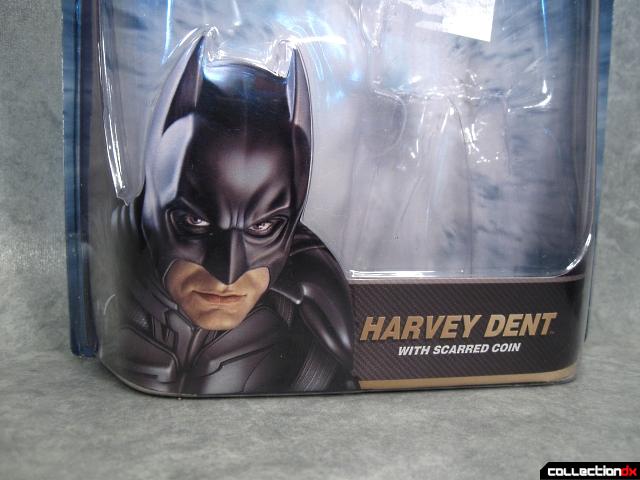 Please note that the package claims Harvey comes with a "scarred coin" which we will later see is a total lie. Someone should take Mattel to court over this flagrant false advertising. 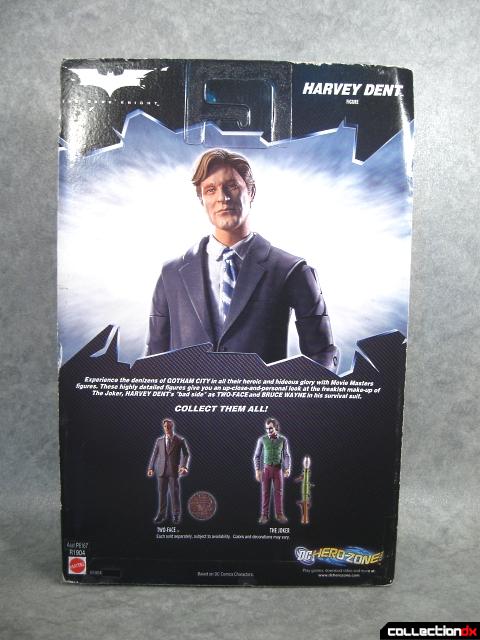 The back of the card has some more information about Mattel's Movie Masters line and is graced with a heavenly image of Mr. Eckhart's plasticized persona. 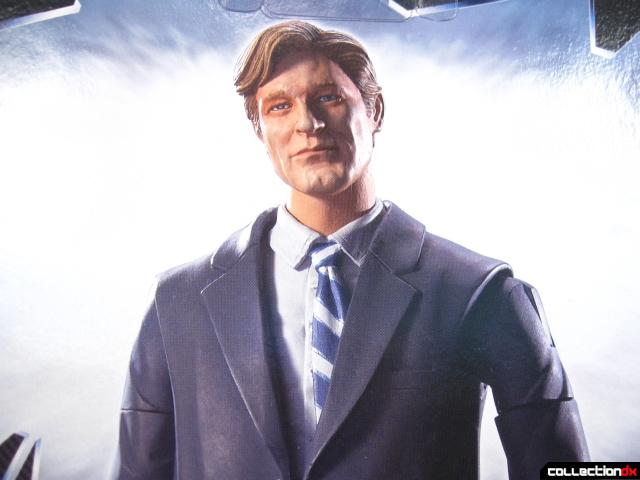 I believe in Harvey Dent. 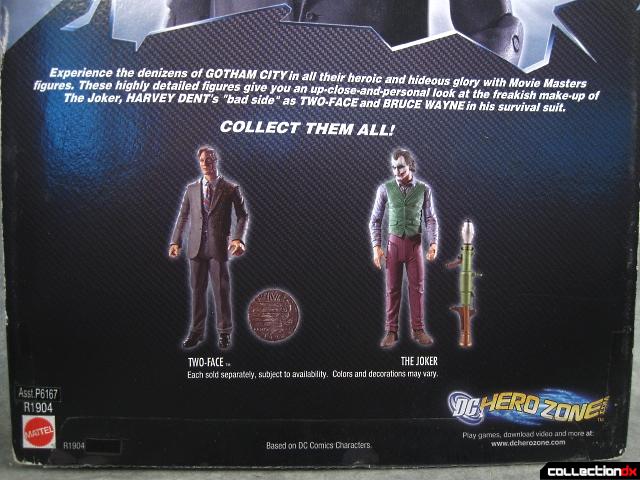 The rest of the line seems to consist of the obligatory Two-Face figure and The Joker with his "freakish make-up." Also advertised by not picture is a Bruce Wayne in his pre-Batman survival suit. 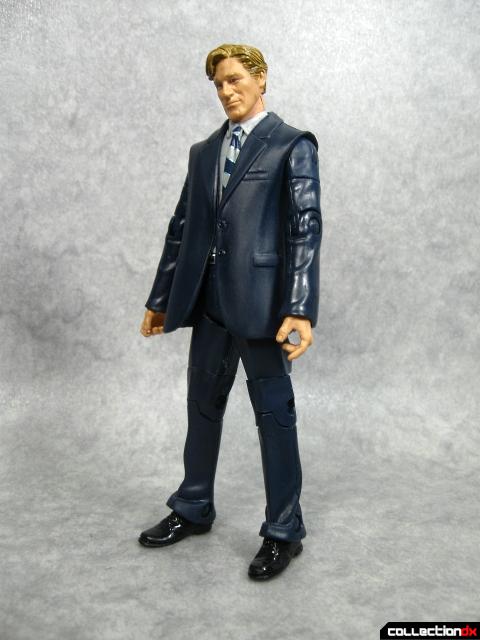 So here is Aaron Eckhart as Harvey Dent. Since this is Two-Face back when he was just a dashing young district attorney, he looks more like he's on his way to the Academy Awards than going out to deliver some fair justice to the people. He stands roughly six inches tall and is a solidly built action figure. 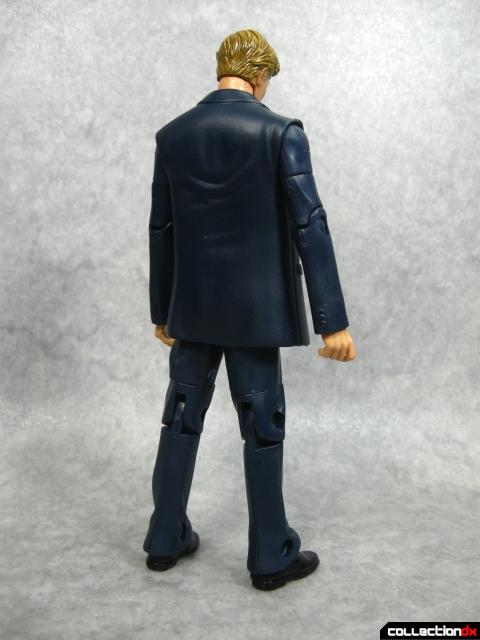 What you see is what you get with Harvey and that's fine. 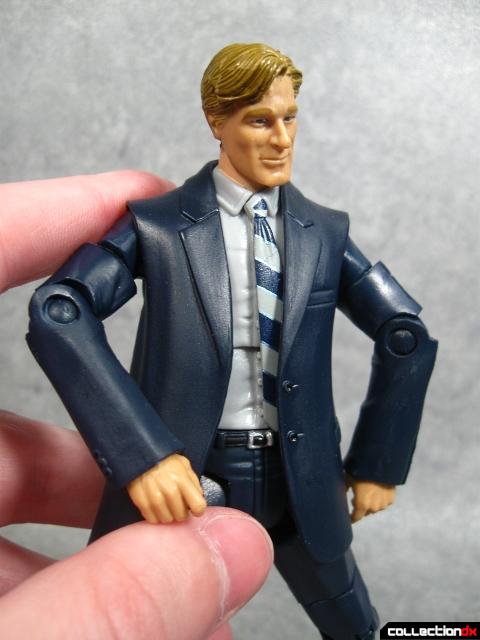 Underneath his flexible PVC jacket is a fully sculpted shirt with a soft plastic power tie. Since the outerwear rather snugly conforms to Mr. Eckhart's body, he had to be in the company of my hand to show off this detail. Note that while he does have a visible seam for a chest joint, the coat prevents you from using this bit of articulation to its fullest. 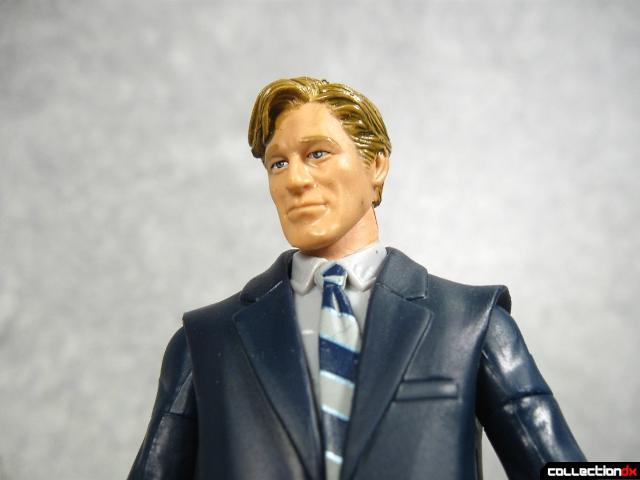 Here is a closeup of Gotham's passionate DA at 1/12th scale. The look in his eyes says to the world, "I'm here to clean up the mean streets of this city and maybe get a doughnut from the roach coach after work." Honestly though, this figure is a decent likeness to the actor given that it's a mass-market toy. However I can't help but notice he is looking a little too much like Robin Williams's lesser known cousin. By default Harvey appears to be looking down at some loose change somebody dropped. You can turn his head left and right but the joint is a simple swivel so Harvey will never see any danger coming from above much like with Michael Keaton in the first Batman film. 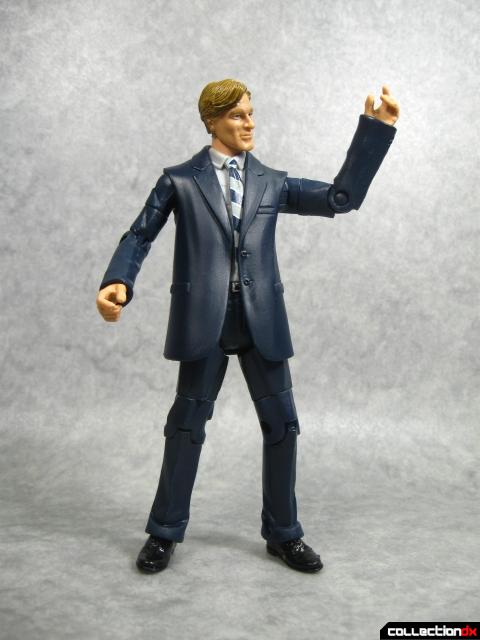 Other than the limited head movement, Harvery has a decent range of motion. Both his shoulders and hips employ universal joints while his elbows and knees have a cut swivel for basic gesturing. 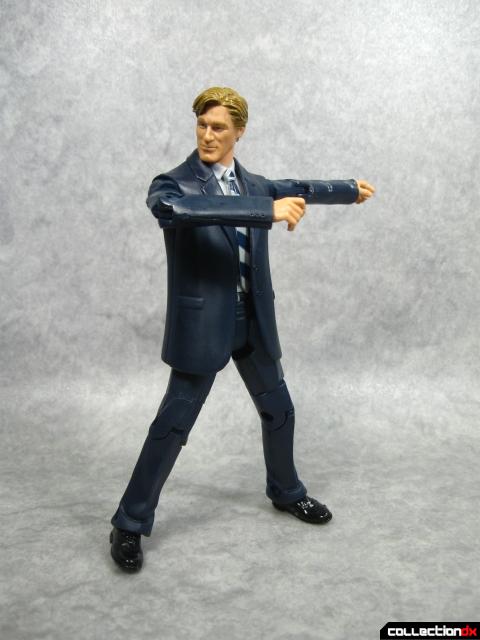 Sadly the authenticity of his sculpt can make his limbs look weird when posed as the swivels go right through the natural folds for his clothing. 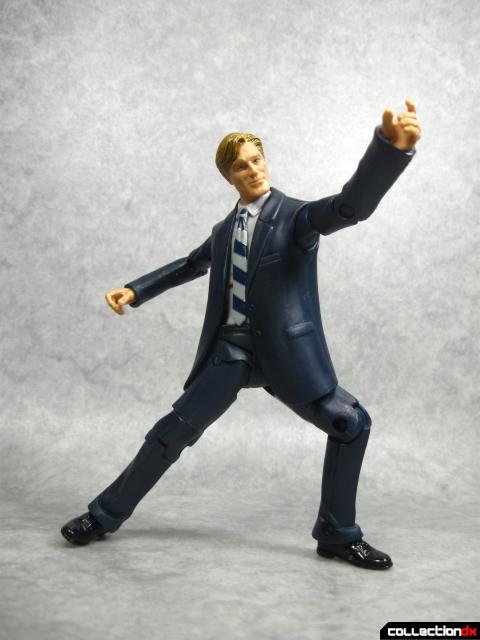 Mr. Dent also has a free moving waist joint that can be tough utilize due to the way his jacket hugs his hips. Also his ankles have a very limited forward and back tilt with no side to side motion. 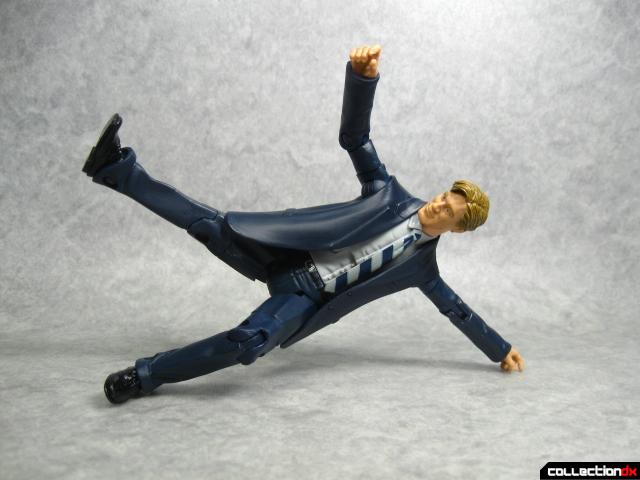 But if you get creative then ol' hip hop Harvey can bust a move with some break dancing. 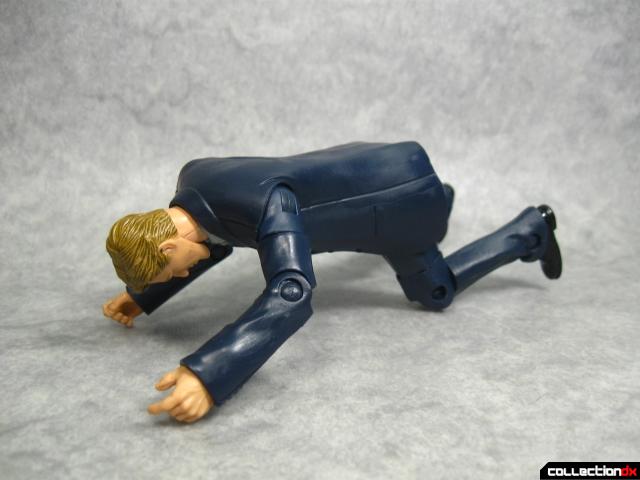 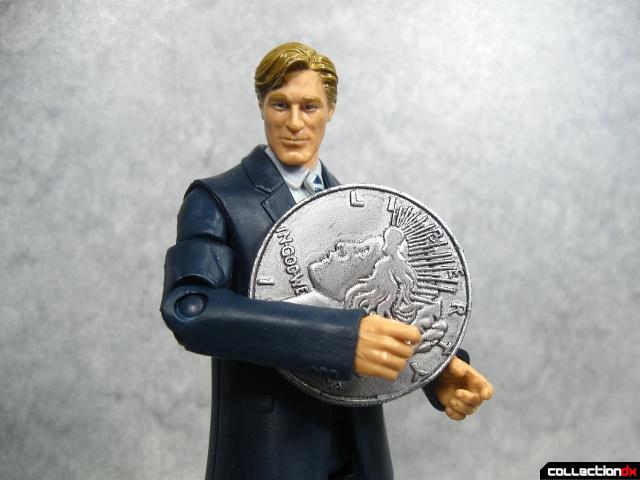 "This is mine and you can't have it!"

Harvey's only accessory is his lucky silver dollar rendered here as a big chunk of metal. The sculpt on the coin is pretty authentic but is obviously much rougher than the real deal. It feels heavier than a normal coin but can be flipped through the air in the usual mobster style. Of course it's comically oversized when compared to Harvey so think of this as an action figure and role playing toy twofer. Your kids can have all the fun of being a courageous yet slightly unhinged government official who takes the law into his own hands and nearly murders a guy with a game of chance! 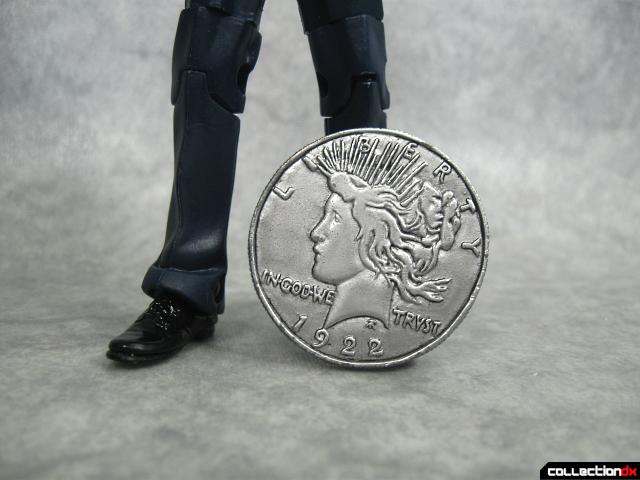 As per the film, this is a two-faced coin with each side being heads. Contrary to what the packaging says, neither side is scarred as that would be what the actual Two-Face figure comes with.

And now for some of the fun you can have with a 1/12 scale Aaron Eckhart! 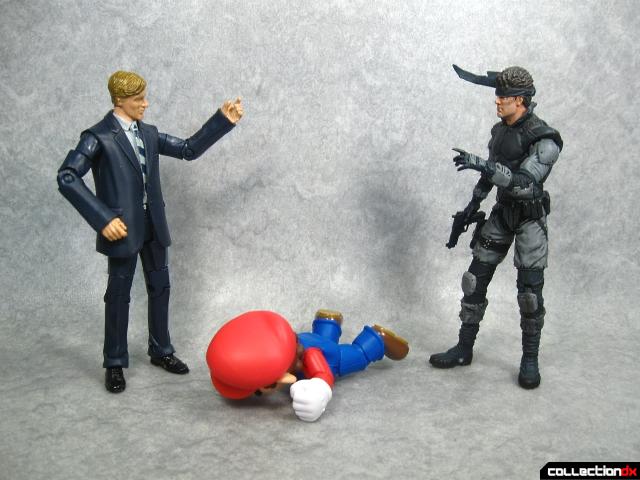 "Oh crap! Our game of Super Smash Bros. got outta hand and I don't think the Colonel can bail me out of this!!"

"Sir you look like you could use a good attorney." 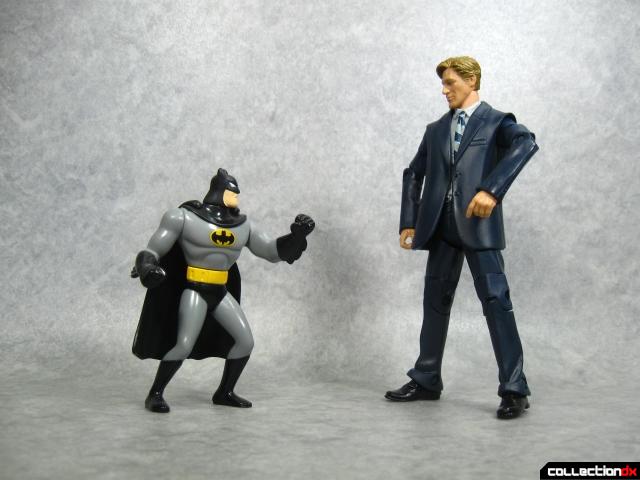 "Harvey I don't think anyone is going to believe you're Batman. For one thing you're way too tall and you have a chin like Dudley Do-Right." 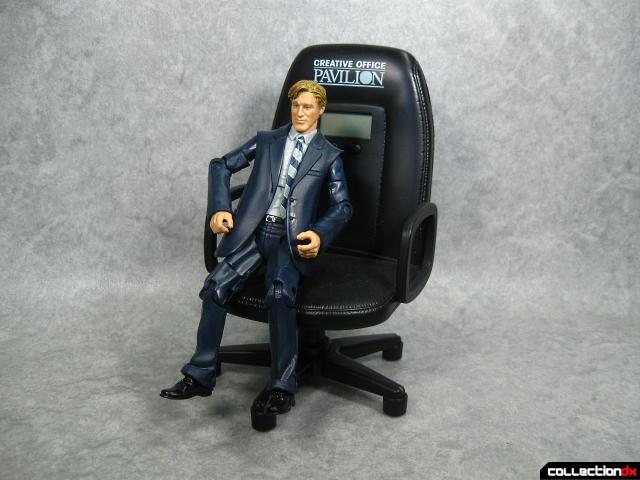 "Saving Gotham from its own corrupt underbelly ain't easy but at least I can come home to a nice comfy chair."

The Mattel Movie Masters Harvey Dent is another odd curiosity in film tie-in toys. Lacking the intimidating look of Two-Face, Harvey here is content to be a decent low-range representation of Aaron Eckhart in a nice suit. These toys are pretty easy to track down at a good price as "the lawyer guy" just isn't a big draw for toy hungry kiddies. At first I thought about passing this figure off to someone else as a gag but now I realize sometimes an action figure of a boring subject can be the most interesting addition to your collection.