Before the Clone Wars began, Hailfire-class tank droids were used by the Banking Clan’s Collections and Securities Division to help enforce their policies, typically against customers who were late in their payments. They are primarily used against heavily-armored targets, using 30 powerful self-guided rockets as their main weapon, and then featuring a laser blaster turret beneath for smaller ‘soft’ targets. Unlike most droids, however, Hailfires can operate across many different types of terrain and move quickly thanks to the use of its dual multi-pitch hoop wheels & shock-absorber system. One deployed during the Clone Wars, the armies of the Confederacy of Independent Systems quickly realized that, while an effective armor killer, Hailfires quickly ran out of missiles and would have to retreat earlier to reload. This forced the CIS to recall them until a solution was found. Several months later, independent repulsorlift-powered Refresher Droids were built which could resupply a Hailfire’s missile racks on the battlefield while on the go and allowing for longer mission durations.

Hailfire-class tank droids were first encountered by the Grand Army of the Republic at the Battle of Geonosis, which also marked the start of the Clone Wars.

Both hoop wheels spin freely independent of each other. Unlike its film counterpart, the wheels cannot change their angle perpendicular to the ground, so they are always angled like this. However, this has the advantage of allowing the set to always keep itself upright when not being played with. 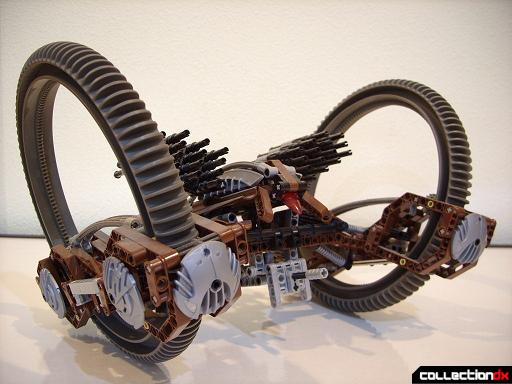 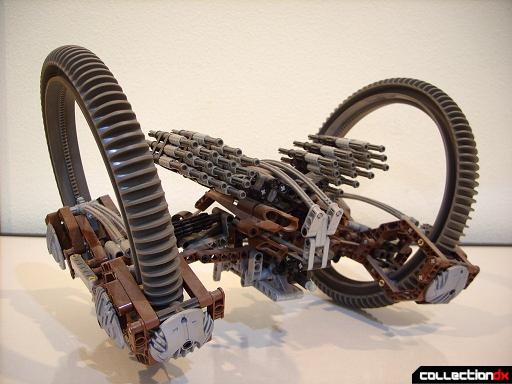 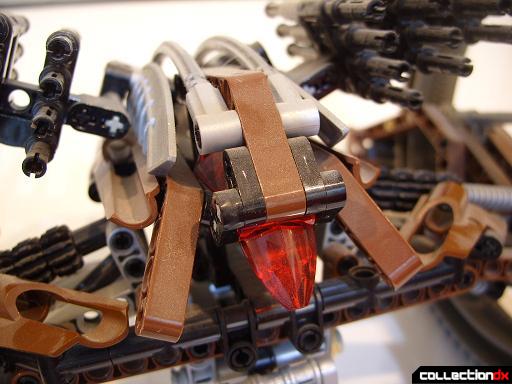 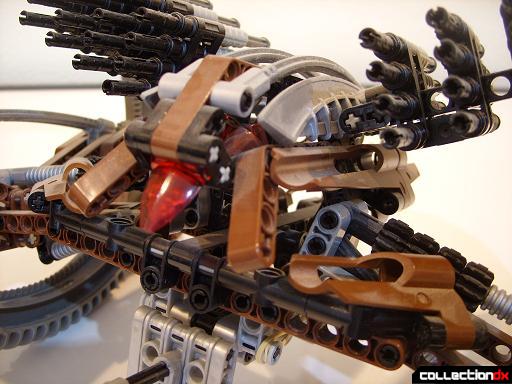 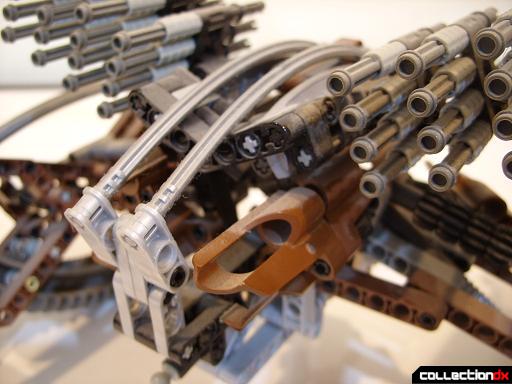 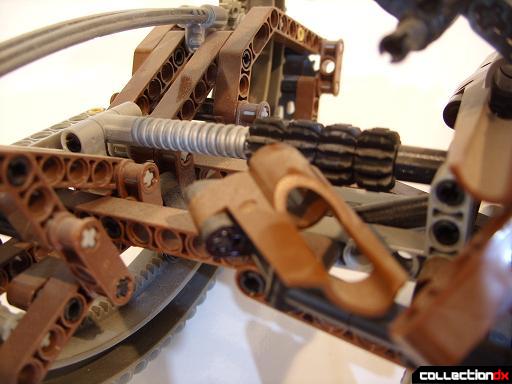 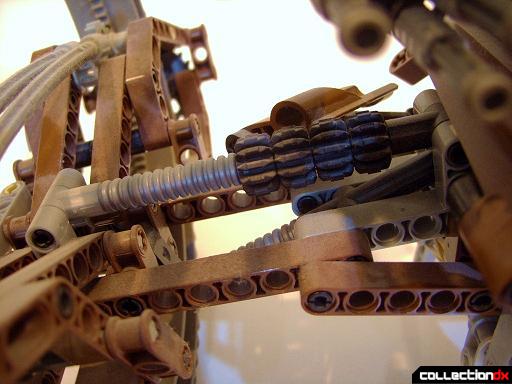 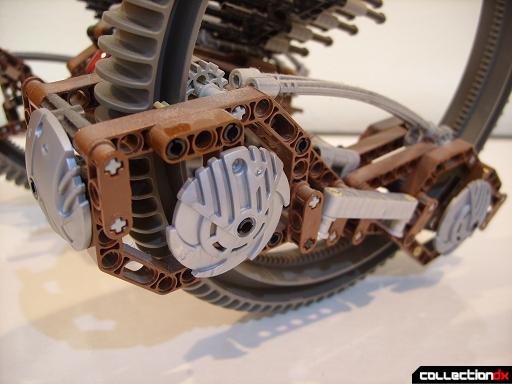 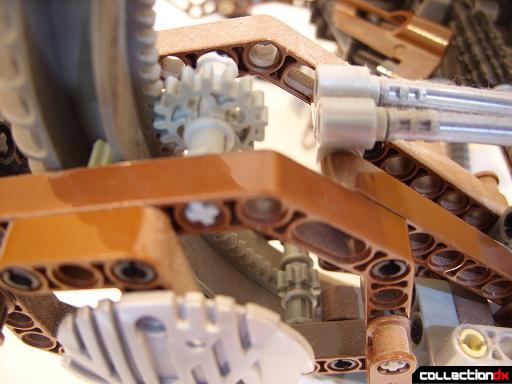 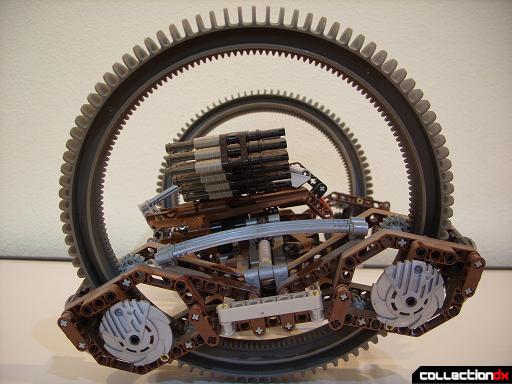 None of the missiles can be removed; they are for display only. 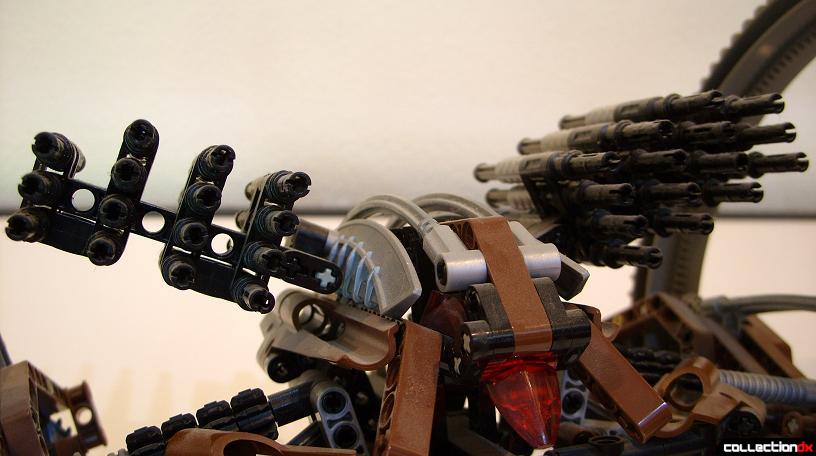 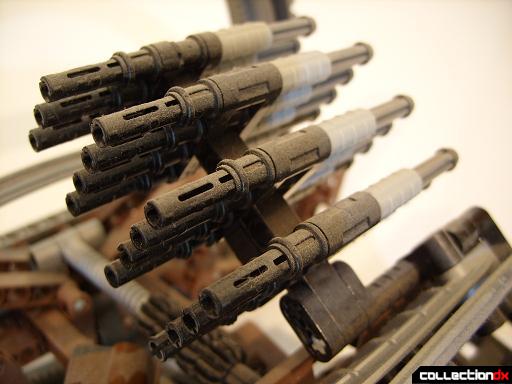 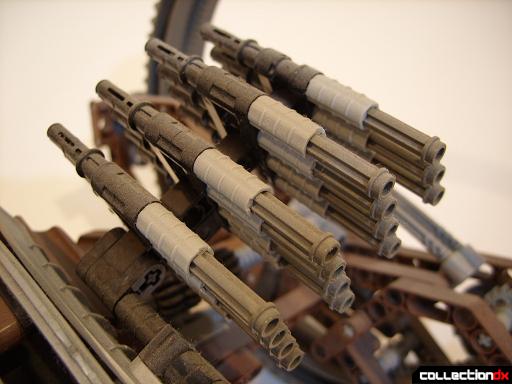 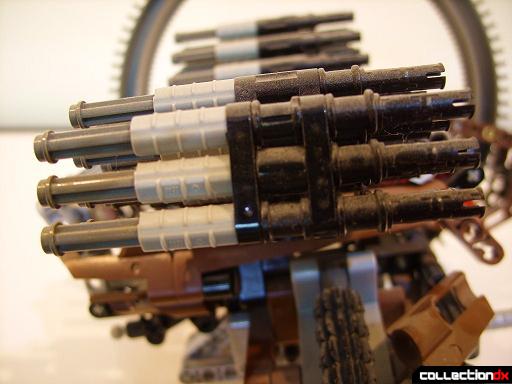 The laser turret features a rubber band-powered swing-down effect when a trigger is pressed in back. When the turret is pressed from the front instead, the rubber bands will retract the turret against the chassis for storage. The turret cannot be aimed in any direction; it is always fixed forward. 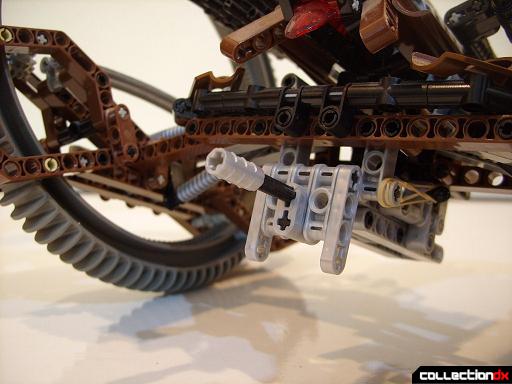 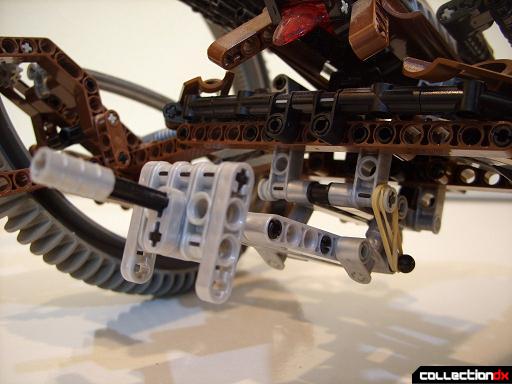 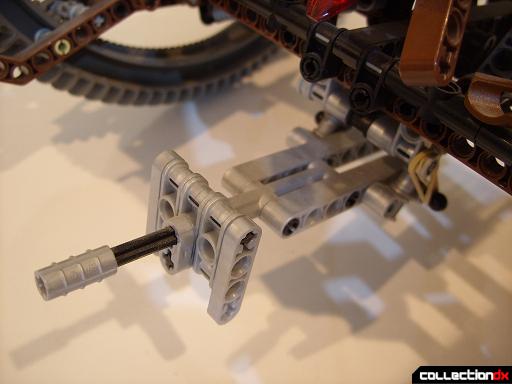 We’d seen space fighters with wings and radiator panels and astromech droids stickin’ out the top for a while. We’d seen many kinds of sizes & shape of droid, even ones that stood 100’ tall and were piloted by Clone Troopers. But this particular type of droid just reached out to me right away when I saw it the first time, on the big screen. The big revelation? It used wheels! Unheard of in Star Wars! It floated or it walked, but it never rolled until then. And it did it on giant hula hoops no less! So flashy yet awesome at the same time. Oh, and it’s a multi-missile mech, which I always love. (When I got this set, I actually didn’t know it had the laser turret underneath! But it’s all good now.) 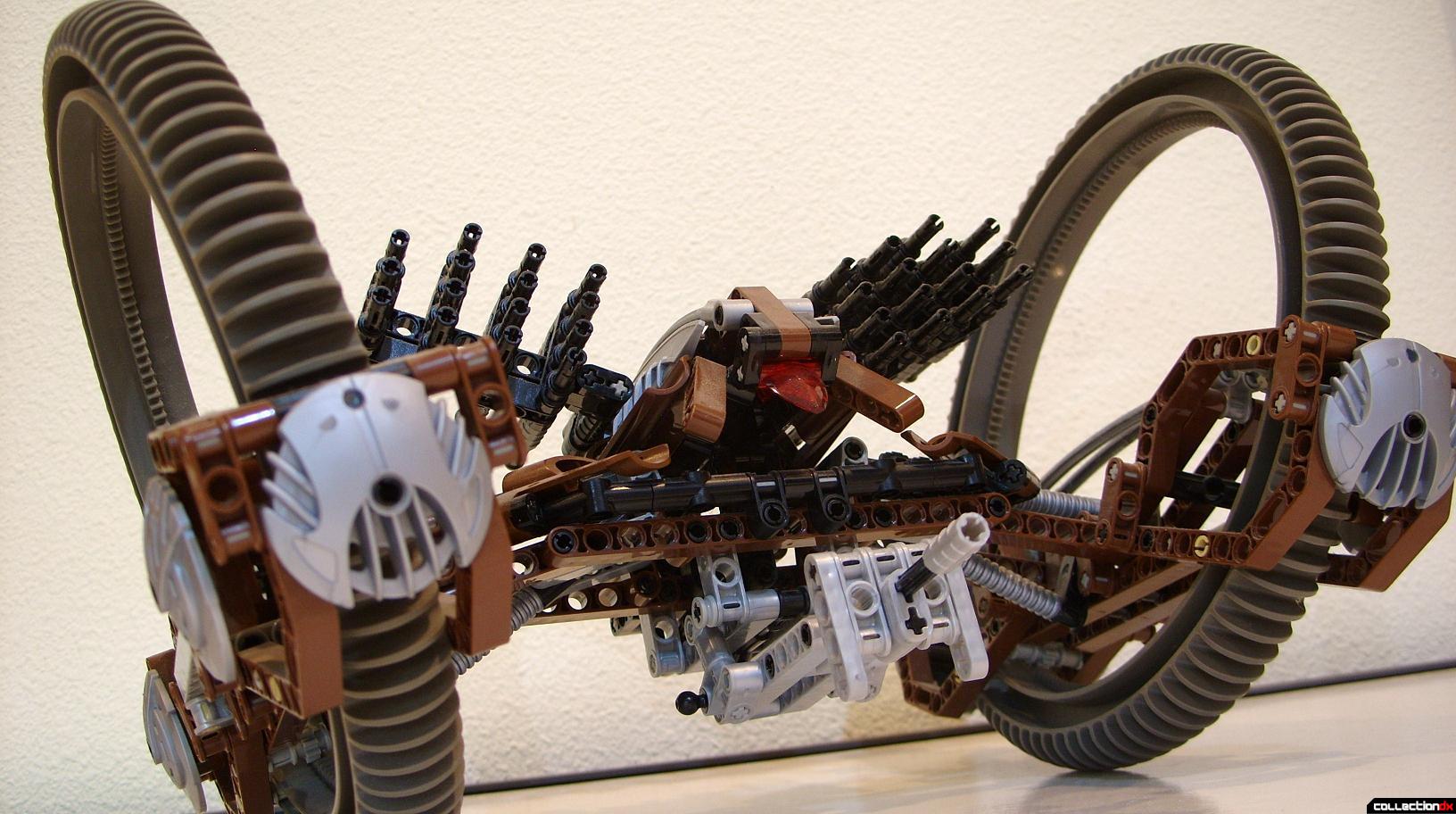 Aside from the central head/body and motors, this tank droid actually doesn’t have as much mass as you’d think for something that size; there’s a lot of gaps in the armor. And so it makes a lot of sense to construct this primarily of LEGO Technic pieces because they allow flexibility of shapes at the cost of having a solid form. It makes for a longer build, but ultimately a better model when it is completed because it has structural solidity that lacks when you use bricks and panels. There was another tank droid released in 2008- Hailfire Droid and Spider Droid (#7670)- which did use panels & bricks, but it was much smaller in size and less complex but included a few regular Battle Droid minifigs so that the Battle of Geonosis could be better recreated. But for this set, it fits in a lot better at minifig scale.
My regrets with this set were it lacked a spring-powered shock absorber system (the pistons seen in the photos are all fakes), the laser turret used LEGO rubber bands (which notoriously break down easily after only a few months of use/sitting on the shelf), and that none of the missiles fired (flick-fire missiles hadn’t been made by LEGO at that time, and even if they were they fall out so dammed easily).
How awesome would it have been if there had been an IR-controlled motor function that allowed you to drive it around? Very. (Years ago, I took my Robotics Invention System 1.5 (#9747) and tried to MOC-it-up so that this set would roll on its own; when it bumped into an object it would back up, turn a little, and go somewhere else. But lacking true MOC skills, the RIS Programmable Brick was very visible in place of the turret. But, it did work…!)

Even though all you can do is roll it around and flip the laser turret down, the Hailfire Droid set is more about presence and dominating the minifig-filled battlefield. Strongly recommended!

I always thought it really funny that adult collectors latched onto the LEGO line.

Most of my friends who are parents only started getting their kids these sets because of the high prices and difficulty finding major characters of the 3 3/4 figures. Now, some of these sets go for so much money, it's bonkers. You could buy your kid a ton of 3 3/4inch stuff for what some of these little sets go for now. You can buy the giant Legacy Millenium Falcon for the same price as the Lego set, which is crazy.

LEGOs are a puzzle, man! It's a challenge to anyone who steps up and plays. One of the reasons I stay with it is because of how they engage you and make you think about what you're trying to accomplish and how you're going to do it. To me, that isn't much different from any transforming toy I have.

I hope you didn't read my comment as a diss on Legos, Eva. That would be like dissing oxygen. ;)

No, the sets are awesome. My buddy's kid has an entire everchanging city of Lego going on in his bedroom which I love to see...

no, it's just strange... the pattern of how these toys got so popular is odd. Parents who can't afford/find the 3 3/4-inch figures, then parents paying high $$ online for some sets for christmas presents, then scalpers buying up a lot of the sets only to sell, then adult collectors embracing the line, is a unique one in the history of toys.

I'll be collecting Lego Star Wars... and this Droid from what I see uses only techic parts , no brick?

No bricks or plates, correct. There's a little Bionicle, but otherwise it's straight-up Technic. The hoop wheels were used again in some other sets, but IIRC, they made their debut here.

Wow, that's make it even cooler...it is compatible with SW minifig, right?

It is to scale with minifigs (see video), but it does not come with or interact with any of them.