I have to admit, I've become a bit of an addict of Cyberverse Commander figures in the Transformers Dark of the Moon toy line. Their compact size and intuitive transformations really do it for me. Guzzle is no exception.

Guzzle is most recently known for being one of the members of the Wreckers, featured in IDW's recent comic Last Stand of The Wreckers. Did the popularity of this comic help influence Hasbro's decision to make this toy? Who knows, but he is definitely a fun toy! 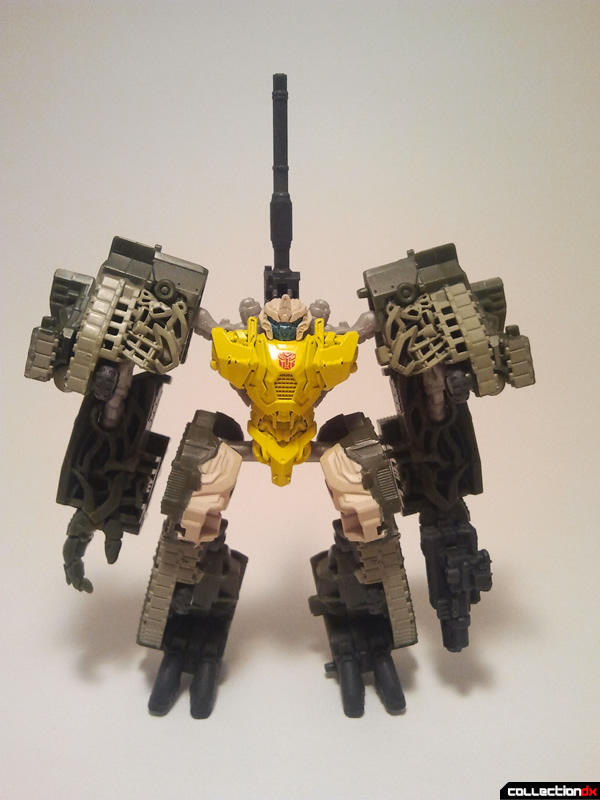 Guzzle's vehicle mode is a tank, and for its size it's pretty detailed. The tiny rivets and tread details are all present on a toy that's only a little bit bigger than a Hot Wheels car. There are even some super tiny tampos on the sides. 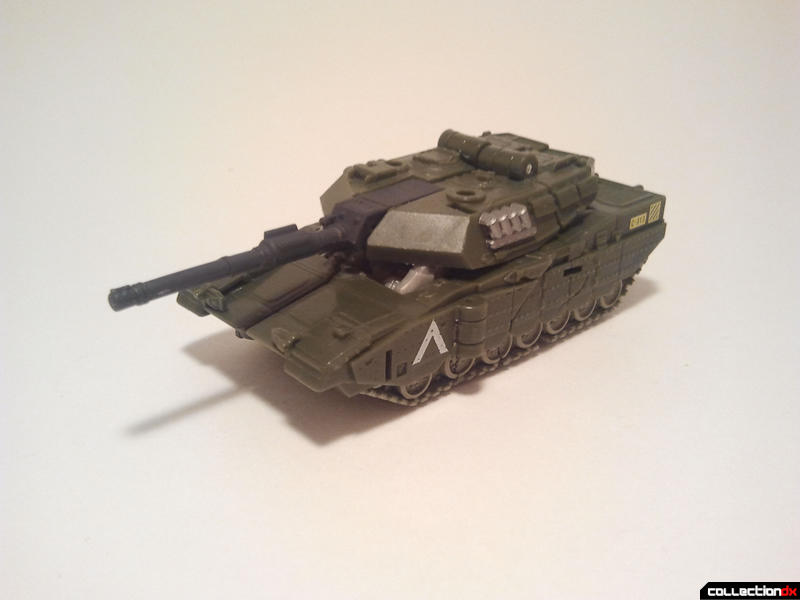 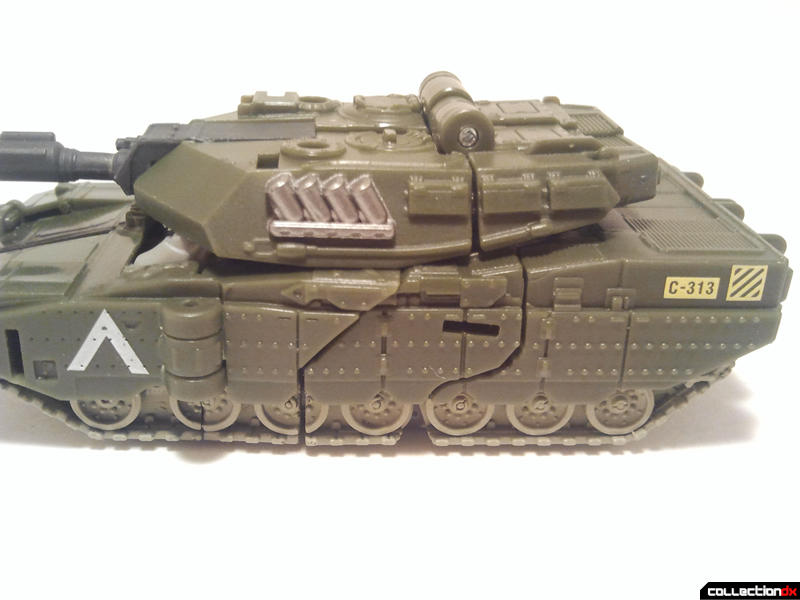 Guzzle has two tiny weapons that peg in on the top of his turret: a missile launcher and some kind of gun. 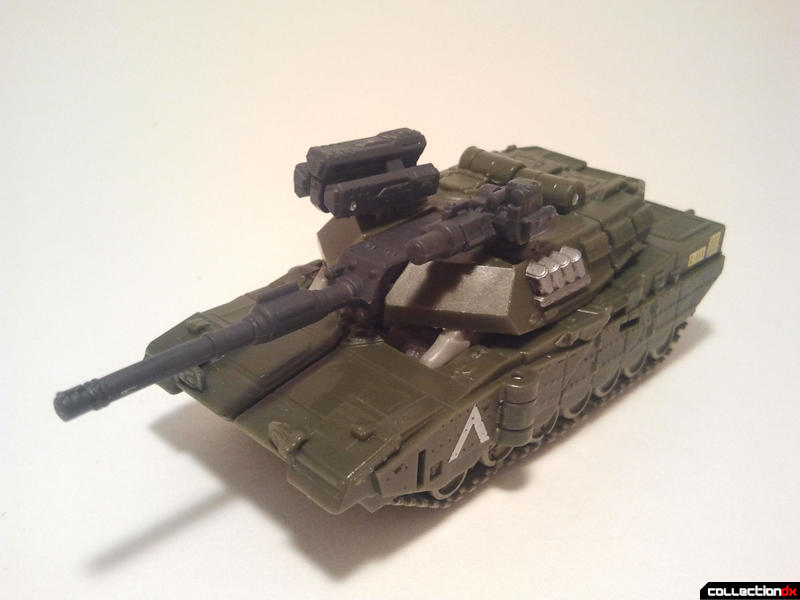 The transformation on Guzzle is incredibly easy and satisfying. It's just a matter of unfolding panels and pulling his arms and legs down. Unfortunately, because of how Guzzle transforms, the turret unfortunately does not turn. At this size I think that's forgivable.

Also if you go halfway through the transformation Guzzle totally has a Zaku Tank mode. 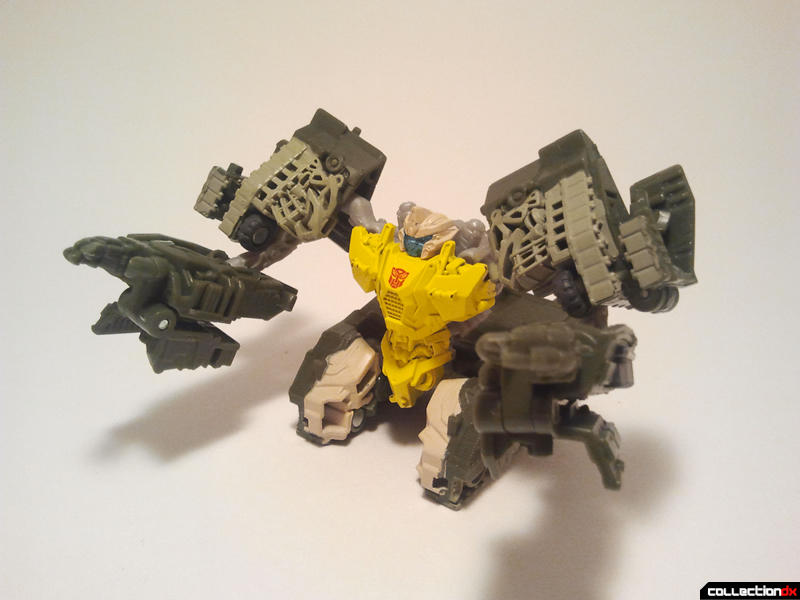 In robot mode, Guzzle is a very stocky little robot. His color scheme is very reminiscent of his G1 Sparkabot toy, with the tan head, blue face, and obnoxiously yellow body. He's a very good blend of the movie and classics aesthetic, which makes him fit in well on most displays. 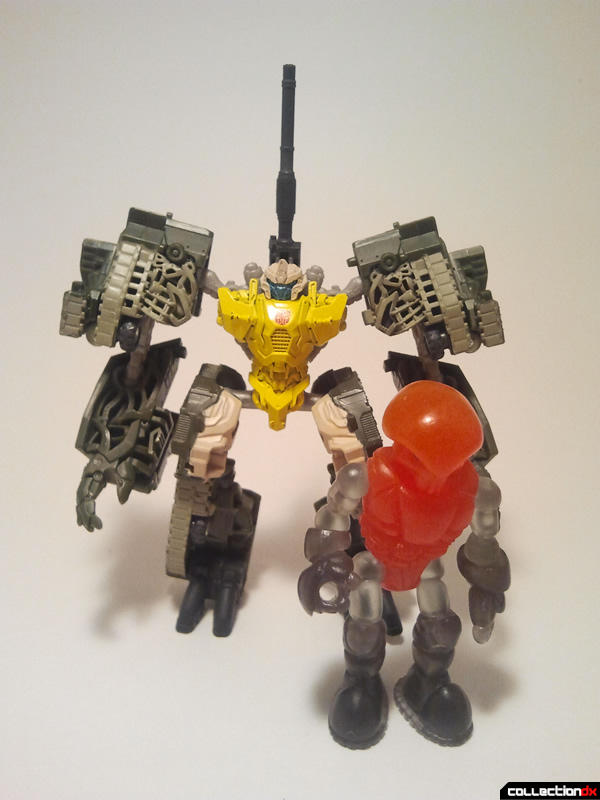 Guzzle manages to pull a bit of a mass trick, where in pictures he looks way bigger than he actually is. He looks like he should be a toy that's about the size of a Voyager, but he's only a few inches tall. 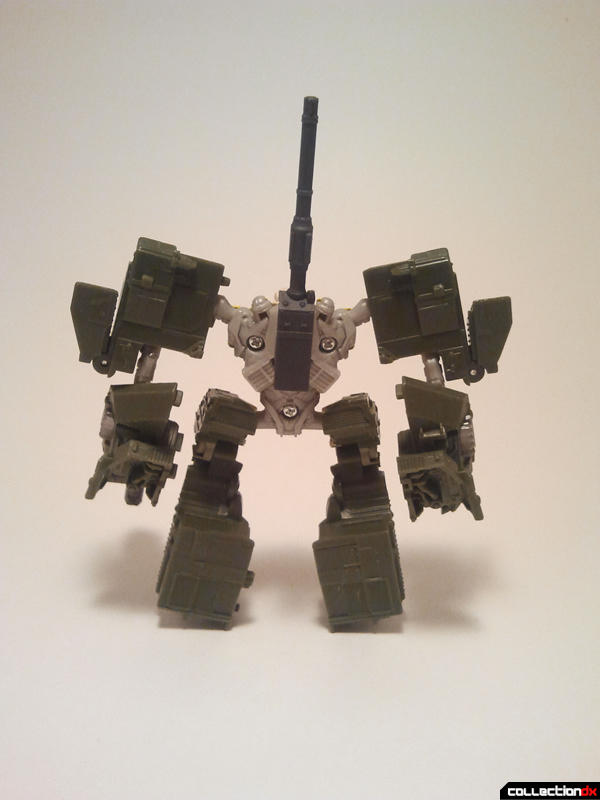 Guzzle's head actually turns slightly. It's only the slightest smidgen of motion, but just enough to help convey he's looking in a different direction than just straight. 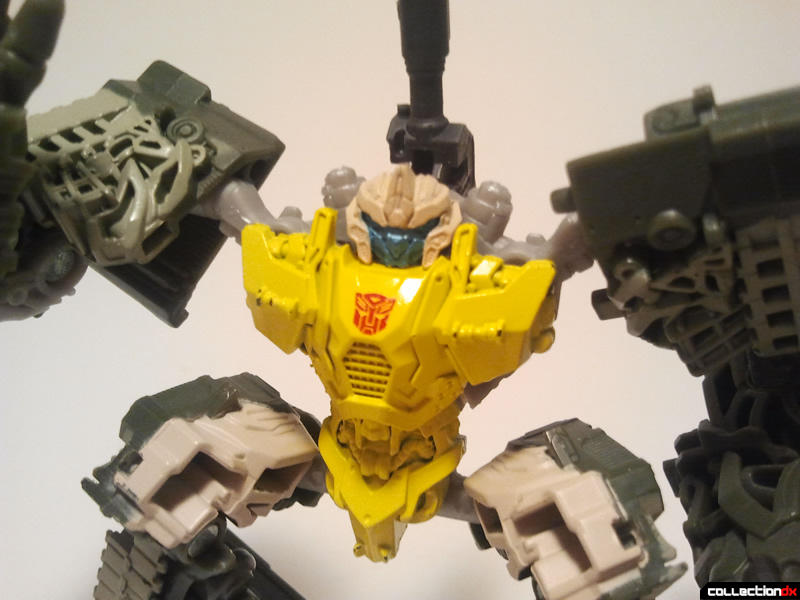 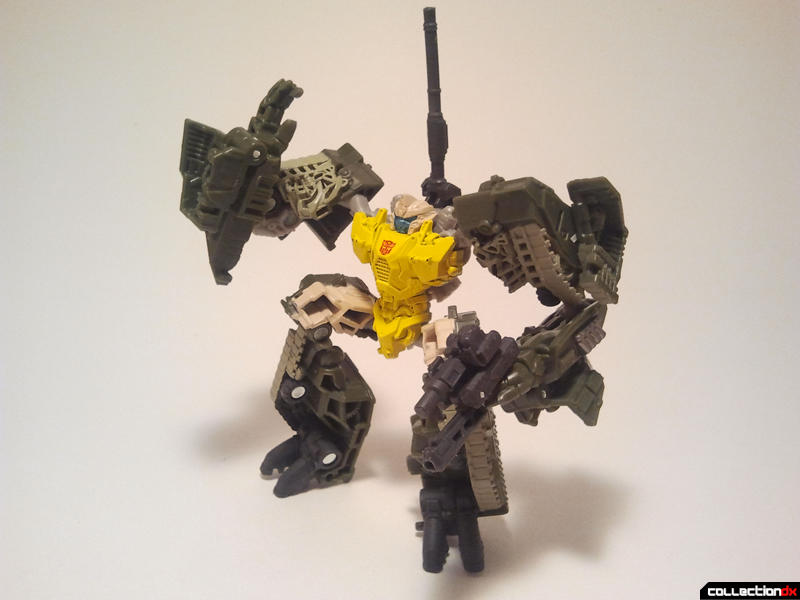 The two weapons that Guzzle comes with can be combined in a single missile gun. Or something. It does look neat, though. 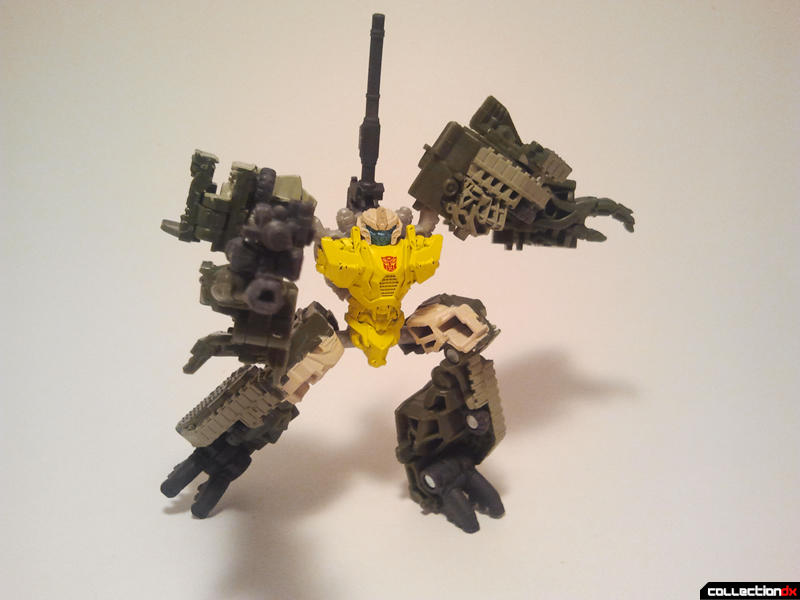 At the end of the day Guzzle isn't a fantastic toy, but he's definitely a fun one. He's just fun to transform and pose, and that's ultimately why I am so fond of the Cyberverse line as whole. If you spot him at retail I would pick him up. This tiny little guy is full of character and will look great on your desk or your shelves.

I think this is the little proof that Hasbro loves the fans of IDW, now if only they'd make the rest of the Wreckers. I want to find this guy but haven't had the time or patience to go bot hunthing these days. Good review!

Oh yeah, I would absolutely love a classics Top Spin and Twin Twist myself, and I think EVERYONE want an Ironfist after reading that comic.

I was really lucky to find one. He's packed in a wave with himself and a repainted Sentinel Prime. For some reason Guzzle was there, but the Sentinel Prime wasn't. I didn't question it though, he was worth ti!

I was looking forward to this guy, and your review pretty much continues my interest. He looks cool! I do wish his turret cannon did something, though. They should have had it be removeable and able to be held, or at least put it on a hinge so it could flip forward over his shoulder. Still, I am glad they gave him some other weapons, so that kinda makes up for it.

So just to be clear, this isn't a character who appears in DotM, it just appeared in that toy line as a random Scout-class release?

That is correct, yes.

Ooh, I like him, yes! Zaku Tank mode makes me LoL, but it's not too bad.

I failed to see DotM in the theater (*cries*) so I must remain diligent in avoiding spoilers for myself.

Even as a fan of the movie verse toy line, I won't recommend the DOTM movie.

Sure, as a movie it does better than ROTF and it tries to pull off a nice plot, but
about halfway the movie the focus on what makes Transformers, Transformers, really gets lost into
a chaos of explosions and disrupted exposition.

Thanks for the review though, while the movie let me down, the toys don't.

Oh, this looks good, I think my Hailstorm and Guzzle would complement each other so well.

Better get this one too.