The World of Gundam is filled with a variety of machines that do not make it from the designer’s paper to the television screen. While unseen by most, these sanctioned Mobile Suit Variations, dubbed MSV, are alternatives to the versions we all know and love. 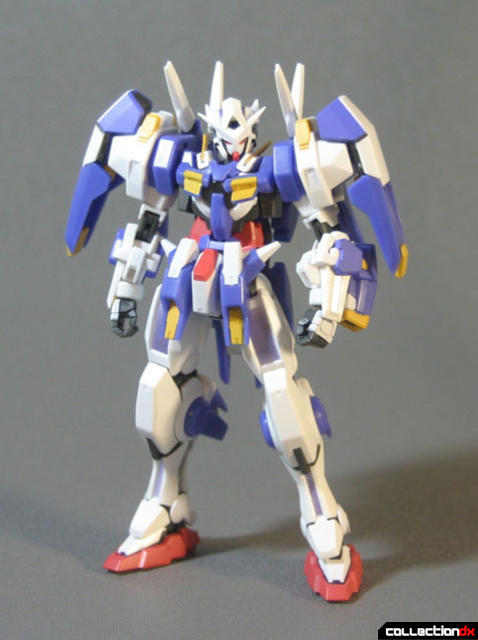 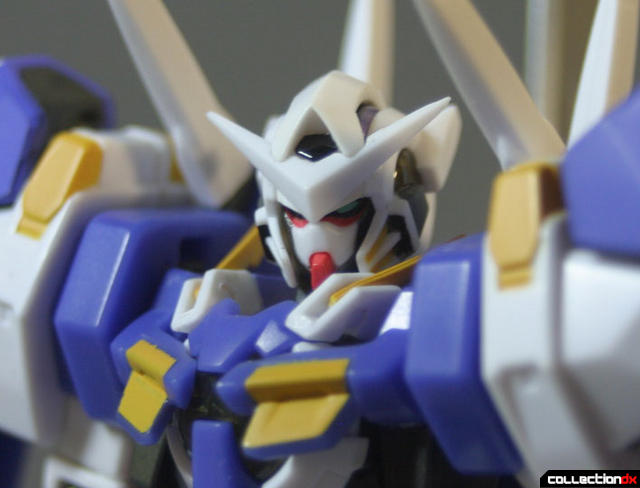 The GN-001/hs-A01 Gundam “Avalanche Exia” comes from Gundam 00V published in Hobby Japan magazine. 00V is a side-story chronicling interim moments not seen during the television series, focused on the prototype machines of the Anno Domini universe told through a series of flashbacks using photos of customized model kits (this was published in a Hobby magazine after all). 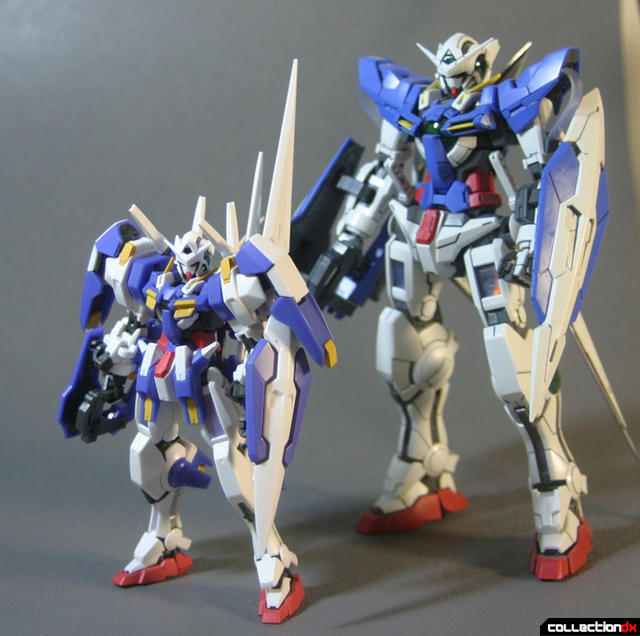 The Avalanche Exia is an armored variation of the nimble GN-001 Gundam Exia from the Gundam 00 universe piloted by Celestial Being member Setsuna F. Seiei. The addition known as the hs-A01 is designed for giving the Gundam extra propulsion and speed in combat, but its added mass and output capacity made it effective only for a short period of time. The Avalanche system would later be adapted into the Gundam’s expanded arsenal system, the GN-Arms.

The 00V series has become popular enough to see treatment in both the Robot Spirits action figures and traditional model kit formats in 1/100 scale and HG 1/144 scale model kits. 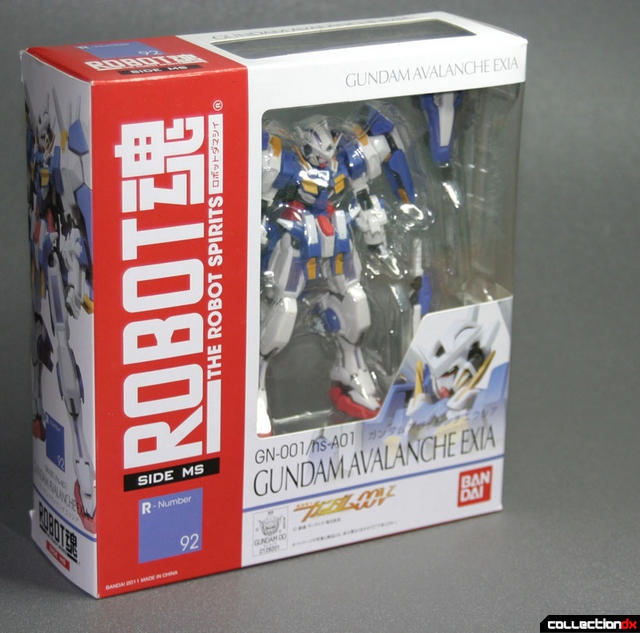 The Avalanche Exia comes in as the #92 entry to the ever growing Robot Spirits line. 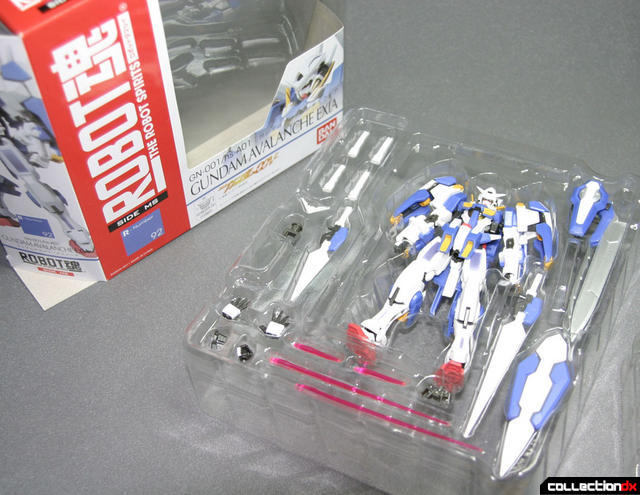 Packaged in the typical window box, the Avalanche Exia is revealed within its bubble containing the standard assortment of accessories, weapons, and display pieces. 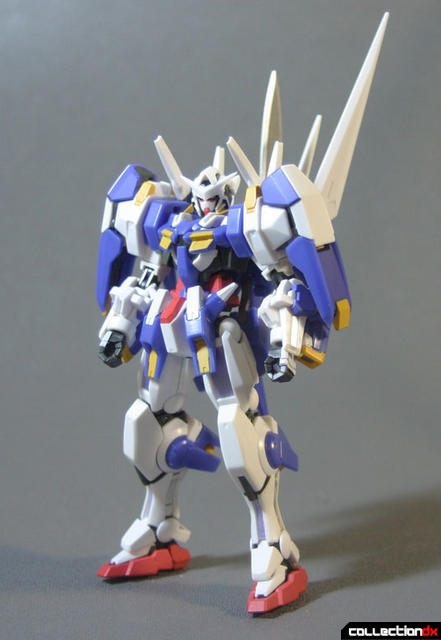 Fully unpacked, the Gundam Avalanche Exia stands at 5 inches tall and despite its bulky upper body, can stand very well on its own without any support.

The Gundam Exia was the most nimble of Celestial Being’s Mobile Suits and this figure displays that impressive articulation even with the Avalanche components. Virtually every point on this Gundam’s body is moveable. 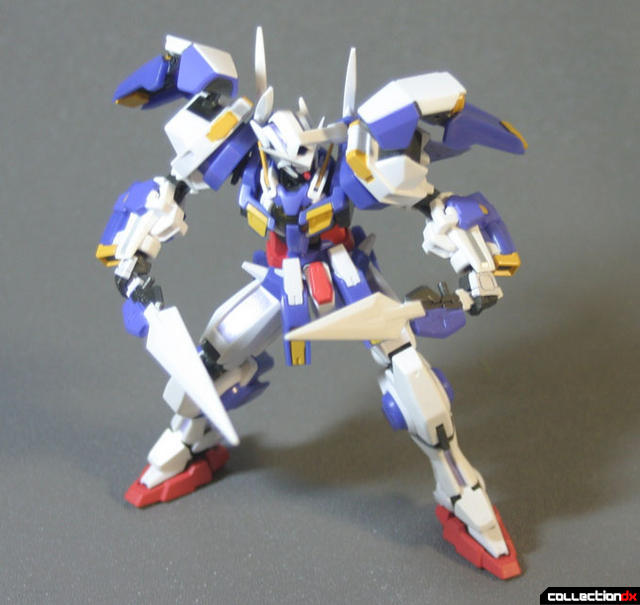 Once it is moving, the Avalanche Exia is as sharp as its weapons! 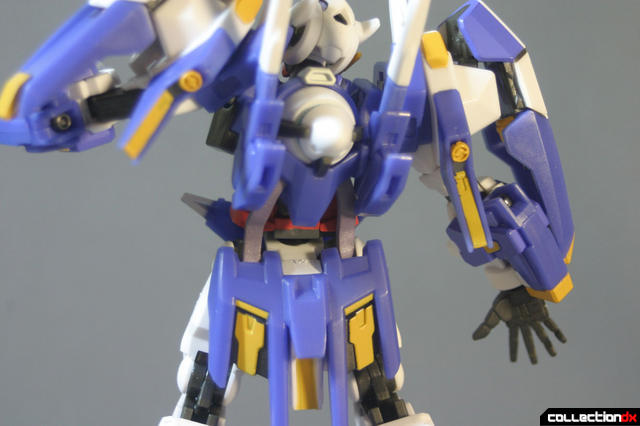 The power cables running from the Gundam’s GN-Drive float freely inside the thruster pack on its rear block to allow the figure to move without breaking them. 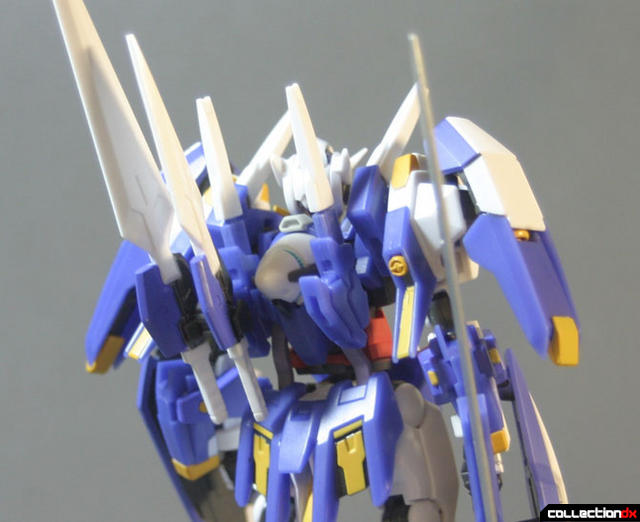 The racks on the Gundam’s back hold its second pair of beam sabers and are hinged to allow the arms room for rotating. They also serve as storage points for the Gundam’s other weapons as well. 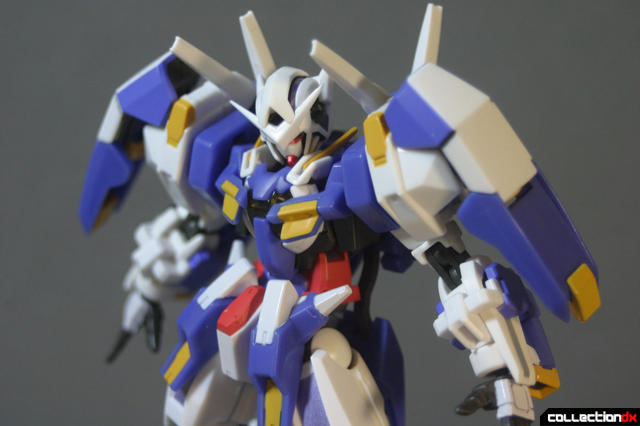 The Gundam Exia’s hinged midsection gives the body some extra motion to make up for the stiff waist which carries the added bulk of its shoulders and back.

The legs are built with a compound ankle (a ballsocket joint connecting the leg into a hinged foot) and double jointed knee, however the legs lose some of their range of motion due to the large thrusters. 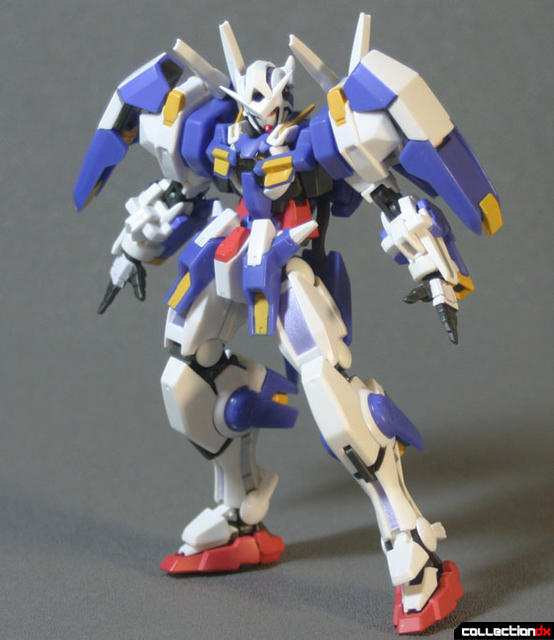 The Gundam’s knee is almost triple jointed and manipulating their rotation can create a more striking stance.
The front skirts look sharp and roll easily against the hip and thigh as the legs move forward. 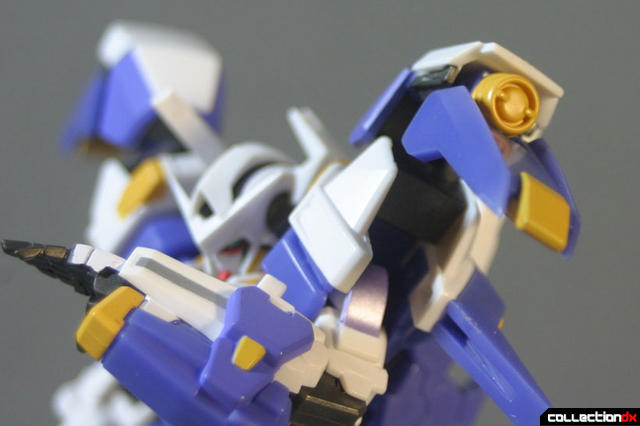 The Gundam’s arms feature chain linked elbows that gives them some dexterity even with the added thruster units on its forearms and shoulders. The GN Thrusters are moveable through via a ball joint at where they attach and are hinged in their mid section to expose the thruster nozzles. 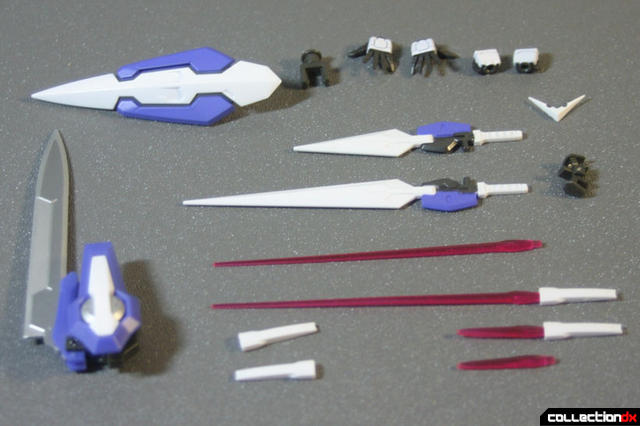 The Exia Avalanche is still the same Gundam Exia underneath, so naturally its accessories are the same.
The Gundam Exia was dubbed “the Gundam Seven Swords” because of its use for close quarters combat and rollout of four beam sabers to compliment its three solid blade weapons: the GN-Blades and the GN-Sword. The Avalanche Exia also comes with a spare V-crest which is molded in rubber material rather than the hard plastic as the one that comes already attached to the Gundam’s head. 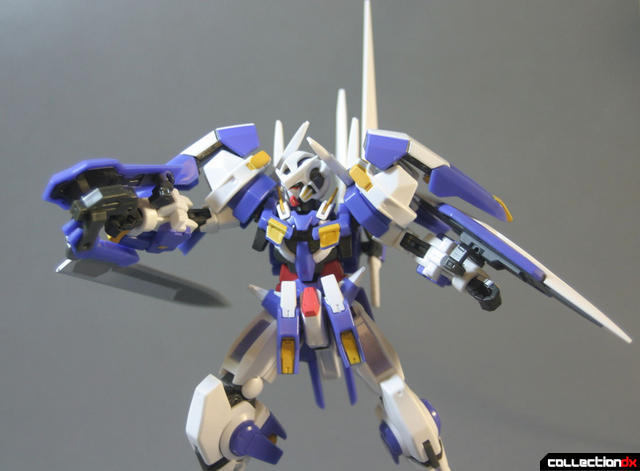 The Gundam’s massive GN-Sword is its most iconic weapon and looks great in toy form. The sword is fun because of its folding action from its inactive mode to its variable sword modes. Since it docks with the forearm, Avalanche Exia can handle the GN-Sword with ease and rarely does it lose its grip. 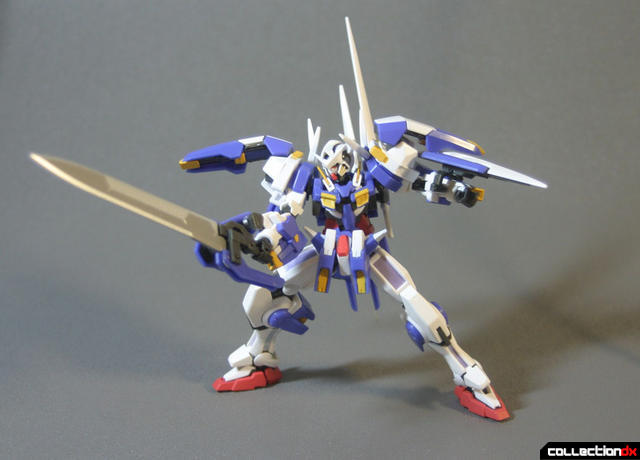 The Gundam comes with its shield, which like the GN-Sword, is designed to dock into the port on the forearm rather than a grip in the hand. Unlike the GN-Sword which goes under the elbow, the shield sticks out from the side and has a tendency of getting knocked out of place by the GN-Thrusters of the Avalanche package. 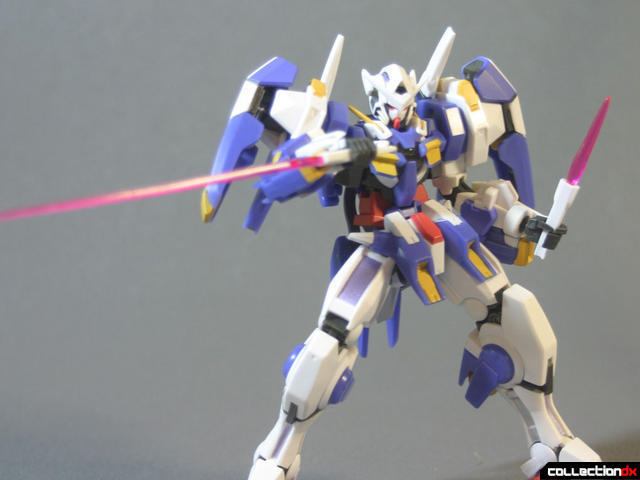 The Gundam’s beam sabers are docked in a cascading position over the Gundam’s shoulders. The first set is mounted directly onto the shoulder armor while the second pair rest on cradles mounted on its back. The beam parts include a pair of short dagger blades and the more common long sword variety. 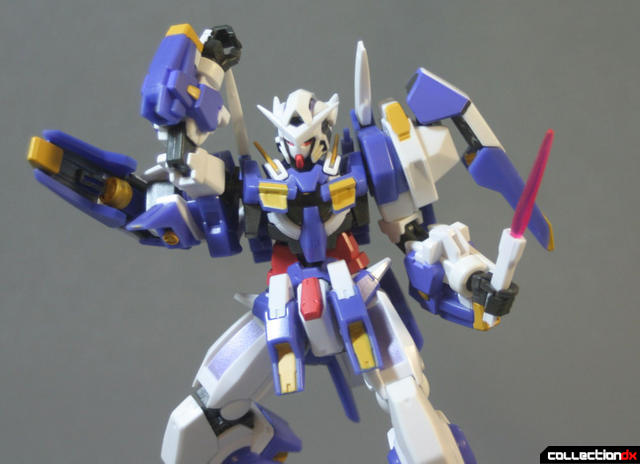 The Gundam’s dynamic range of motion allows the Avalanche Exia to pose grasping at the second row of sabers the best. 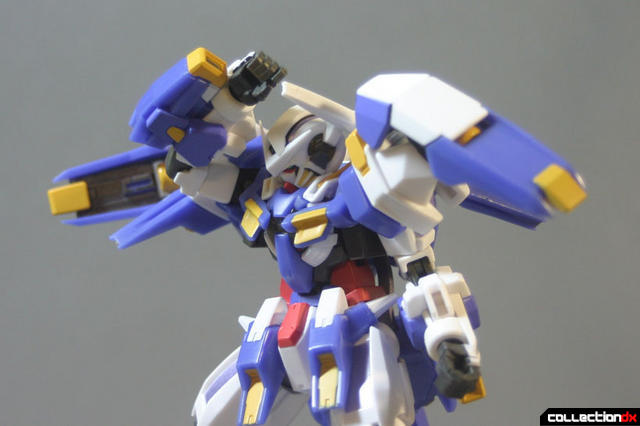 Unfortunately this does not work out so well for the sabers on the shoulders. 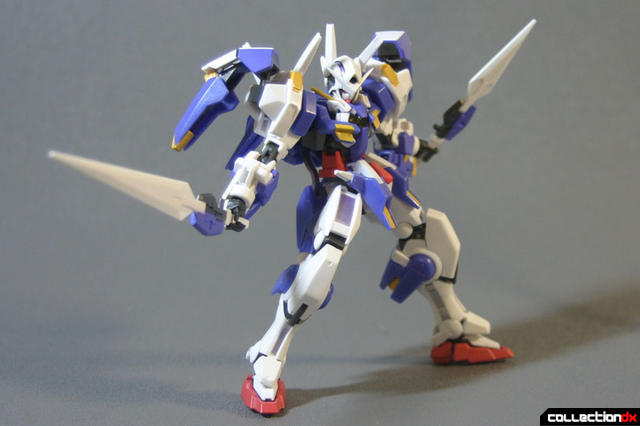 The paired swords known as the GN-Blades are the solid alternative to the Gundam’s primary weapon. 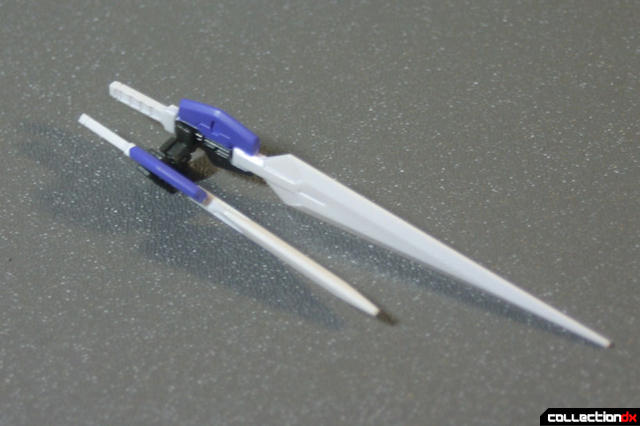 On the original Exia, these blades would dock on the Gundam’s hips, however for the Avalanche they come with a cradle that docks both swords into the hardpoints on the Gundam’s back. 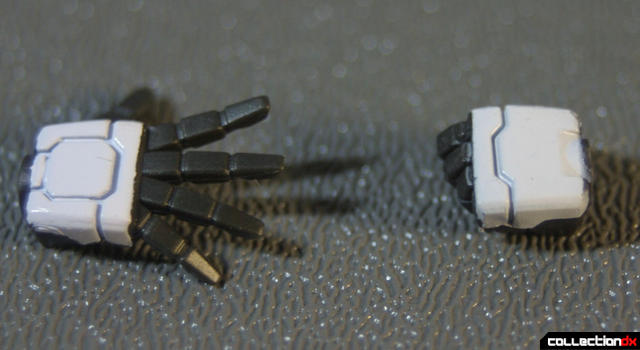 The Avalanche Exia comes with multiple sets of hands for its display such as the closed fists, splayed palms and hands designed for gripping its weapons. For some reason though, the closed fists have different backhands than the others. From experience with designer Ebikawa’s work from Gundam 00, the closed fists resemble the hands from later model, the GN-0000 00-Gundam than the GN-001 Gundam Exia. 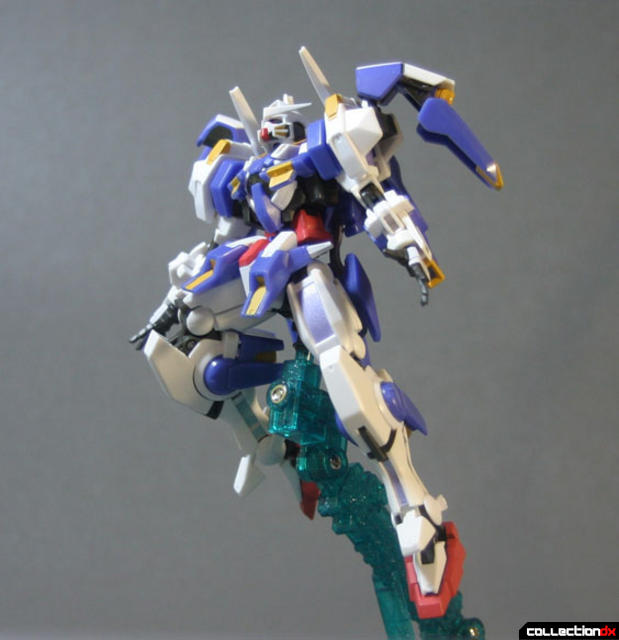 Since the Avalanche Exia is meant for aerial combat, the figure comes with a display base clip meant for the Tamashii style display stand. If you don’t have one of those however, the display clip works perfectly fine on an existing Bandai Action Base 2 should you have one of those instead. 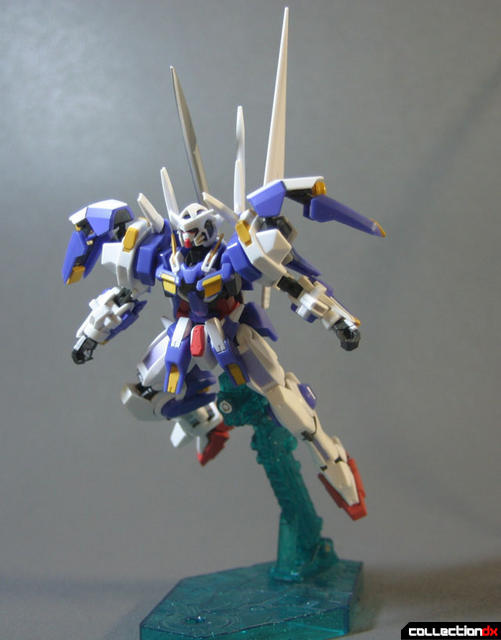 Overall, the Robot Spirits Gundam Avalance Exia is a nice addition to the collection. Its bulky extensions on the Gundam Exia’s nimble body can be a little cumbersome at first, but it does not take away the fun value of having an overcharged Gundam on your shelf! 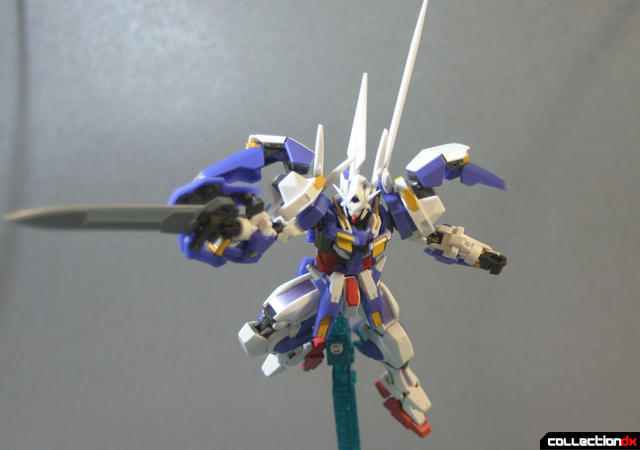 This sample is courtesy of Tamashii Nations! Available now at BigBadToyStore.com!

6 comments posted
I don't care what the stats

I don't care what the stats and in-canon explanation is: the Exia just looks better without those unnecessary extra panel armor crap that's a poor excuse for a new figure to be released. I mean, how valuable REALLY is skirt armor of all things that you need to reinforce it??? I didn't like that on the V2 Gundam either, it just felt cheap and cheesy.

And the extra blades on its back are facing the wrong way IMO.

Never expected the grand Joker Eva to make a response like this, but hey, its a bold honest opinion and I respect that!

The Avalanche MSV manual and the RS book shows that the swords are meant to be held upright like that. btw

I KNOW they're supposed to be held upright like that, I KNOW that's how it was made. What I'm saying is that it doesn't look that great when they're arranged like that.

I actually really like the Exia. It had echoes of the Turn-A, but in a good way. My only problem with it, though, was how stubby the feet looked. Those feet really made it look like it was on peg legs or somethin' weird.

I think it looks neat, all spikey and what not.