ToyWorld is another relative newcomer to the third party Transformer scene. They have had a strong start, debuting with the highly praised Hegemon, an ambitious Generation 1 Megatron update. Their next act is a line of figures based on the often-overlooked Generation 1 Throttlebots. The Throttlebots were Transformers with pullback motors and hardly any transformation to lousy robot modes, but ToyWorld's are better!

For details of the transformation and my overall gushing, check out the HD video review! 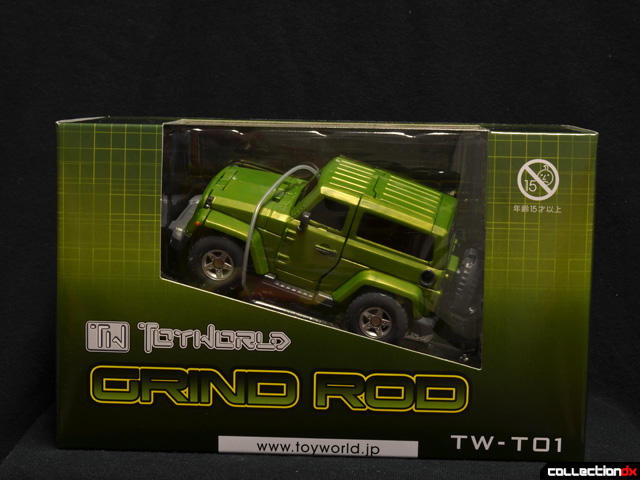 Grind Rod is the first release in ToyWorld's line, an update to the Autobot Throttlebot Rollbar. The packaging is slick, featuring clean graphics and a vacuum tray designed to display Grind Rod's vehicle mode conquering some terrain. It's more dynamic than the standard box, and I dig it. 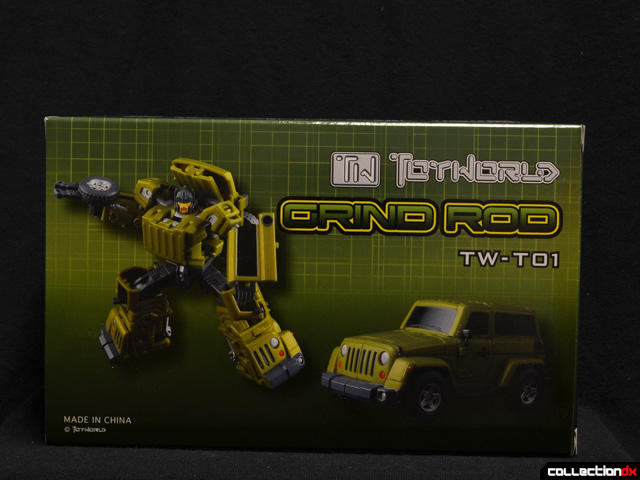 The back of the box is clean and features nice photos of the toy. It's a little spartan, but the box is going to end up in the trash anyway. 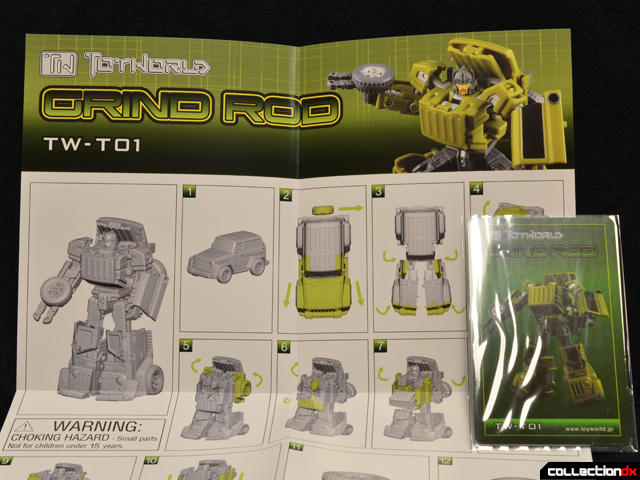 Instructions and a stat card are included. Gotta collect those stat cards. The instructions are good, but I did have trouble following one or two steps the first time. 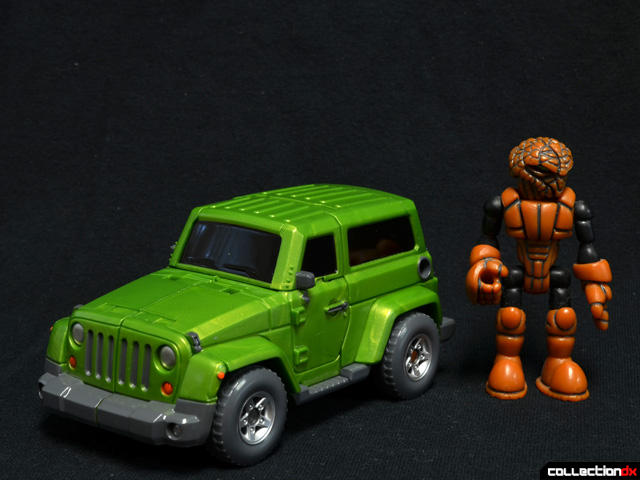 Grind Rod's vehicle mode is an unlicensed Jeep and looks great. The truck mode is tight and compact, with lots of tabs securing everything in place. The four wheels all touch the ground and roll. The plastic quality is impeccable. Grind Rod is made entirely of plastic, but feels like he could be used to bludgeon somebody without damage (to the toy!) 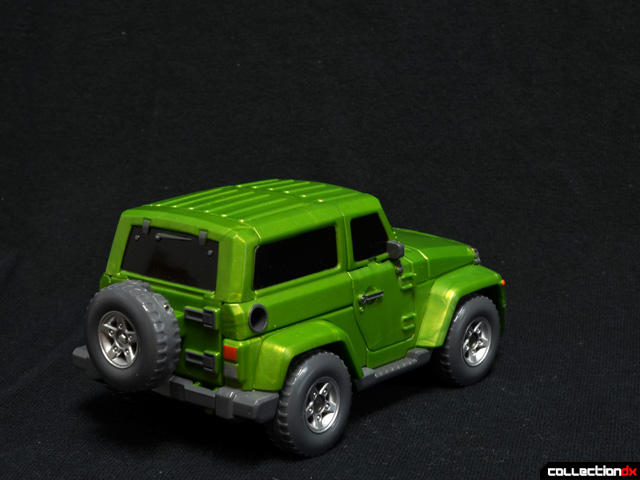 On the back is a spare tire secured via 5mm peg. 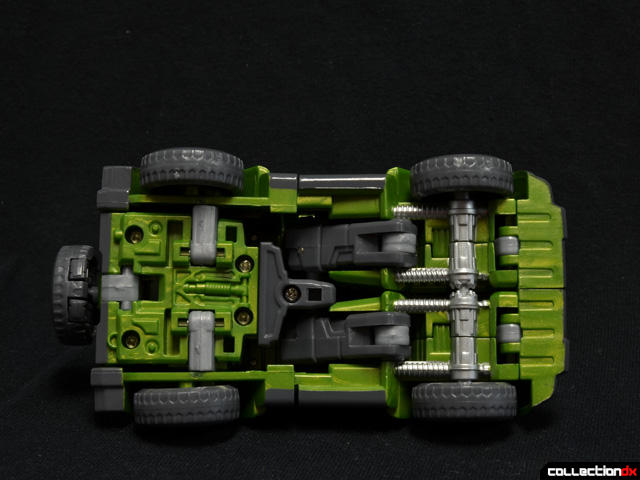 The underside is admirably clean. The robot pelvis and legs are still obvious, but I like the added detail and paint work on the axle and suspension. It's always nice to see toy makers put in that extra little effort. 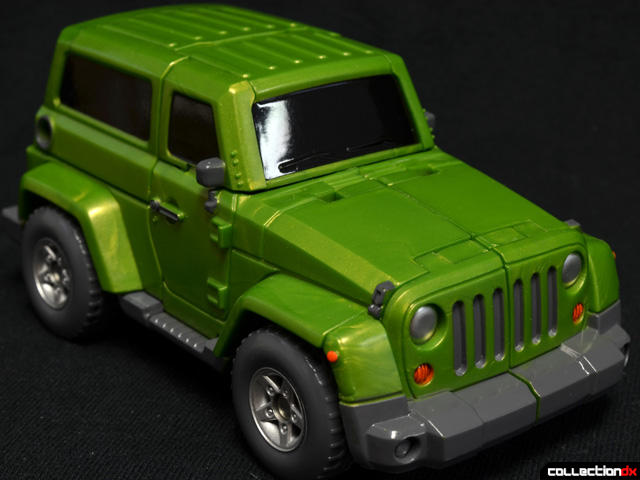 Grind Rod is a lurid shade of green with just a little bit of swirl in the plastic. The swirly finish gives a very toy-like look, but it's a great looking toy jeep. The one thing I wish is that the tires were painted a darker black/gray. The tires are molded in the same color as the painted details, which looks a bit odd. 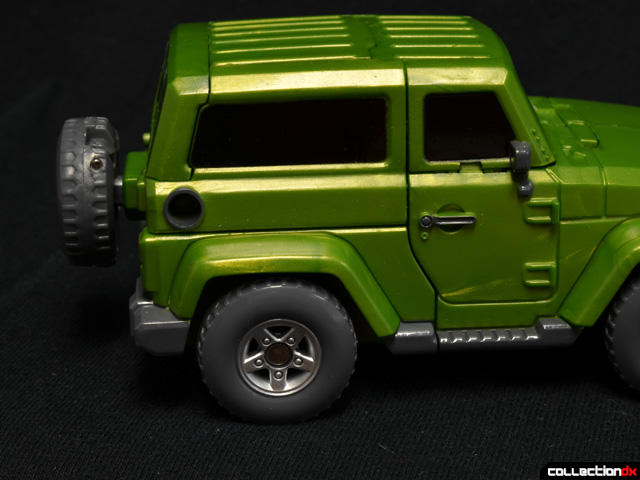 There is an additional 5mm port on each flank of the Land Rover. At first glance these ports do not do anything... 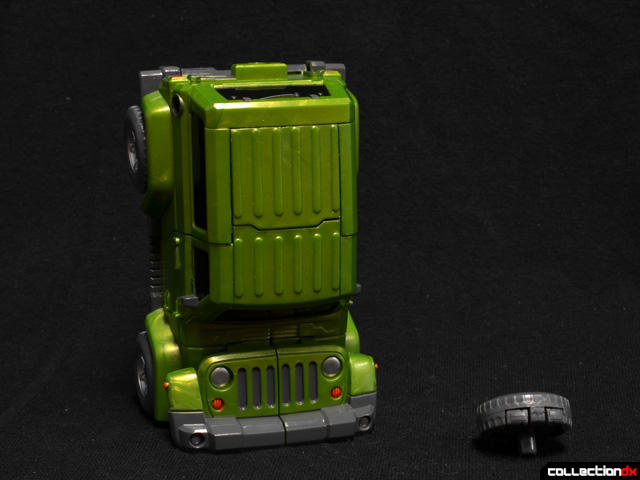 While not in the directions, eager fans discovered a possible foot mode for a combiner. The possibility of a gestalt started off as speculation, but ToyWorld later confirmed that the not-Throttlebot line would combine. As feet go, Grind Rod is not amazing, but could be effective when matched with other similarly styled figures. I am not sure how the combination would work, but the 5mm ports on the rear sides and back would seem likely to play a role. 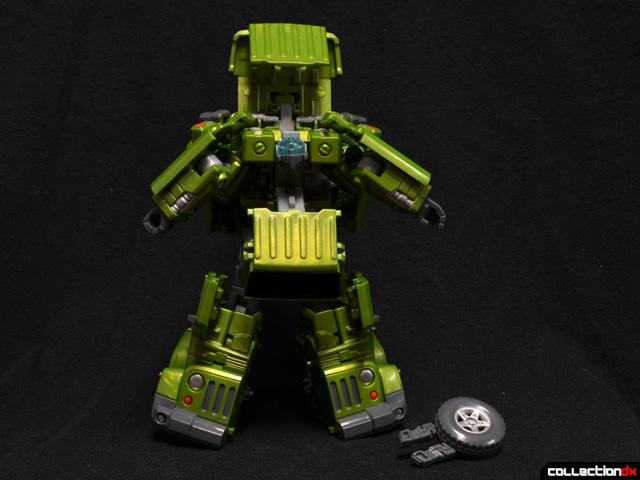 Transformation is straightforward and satisfying. The transformation layout borrows from very traditional Transformers, but has a few nice tricks. 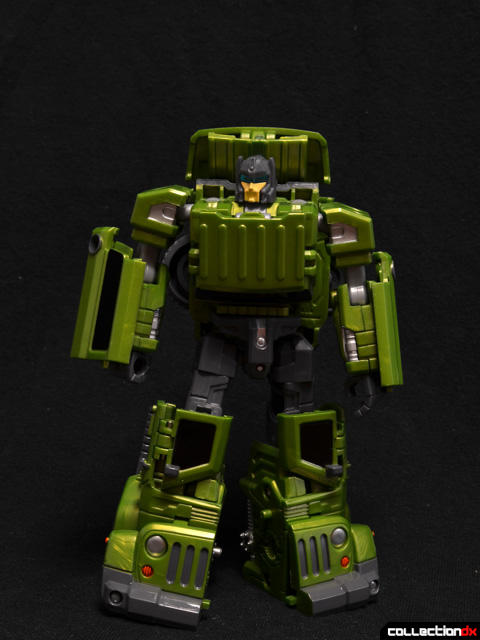 Grind Rod's robot mode is glorious. He's green and blocky. What more could a boy want? The fit, finish, and paint are crisp and clean. There is not a ton of paint, but it all is applied without error. 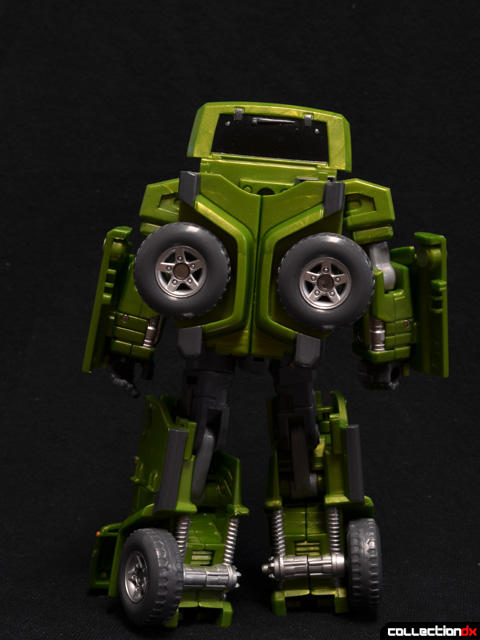 The back does a nice job of forming the jeep kibble into a coherent backpack. I wish the flank panels locked together a little better, but they do look good back there. 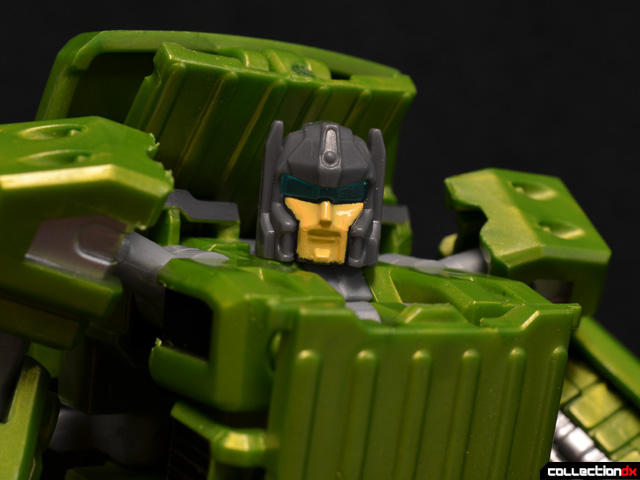 The head sculpt is stoic. The eyes feature light piping, but they are a bit dark. 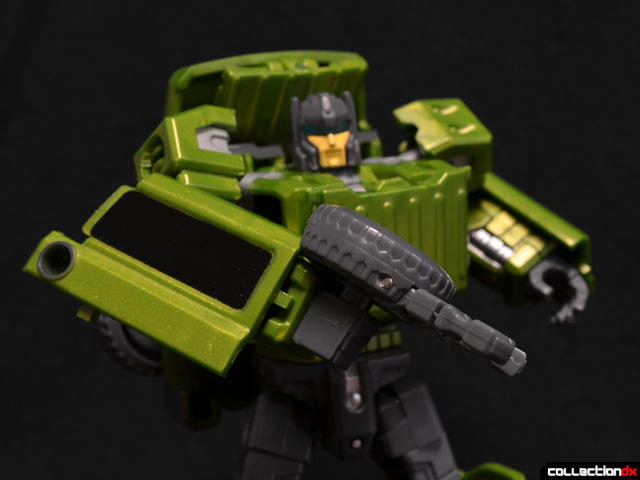 Two barrels unfold from the spare tire, forming a decent little gun. The only problem I have with the gun is that it does not quite fit up against the arm kibble unless you fold the arm panel back out of the way in its vehicle mode position. Just a millimeter difference on some clearance here would have solved the problem. 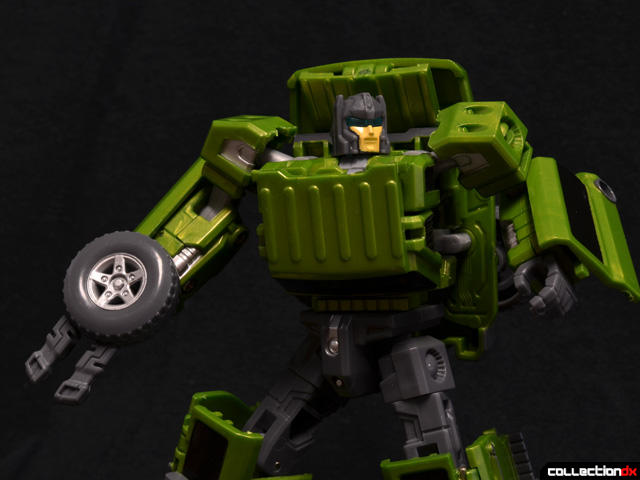 Armed with his tire gun, Rod is a striking little figure. There's nothing overly ambitious about the design, but I find it an excellently made little figure that does what it sets out to do very well. 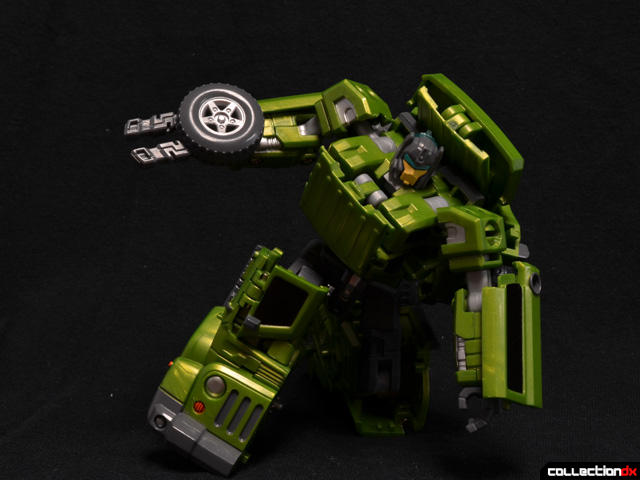 Posability is good, and Grind Rod can just about pull off the Iron Man poster pose! 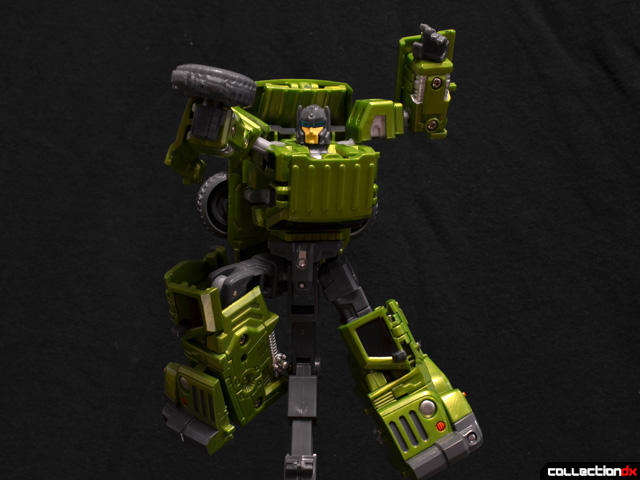 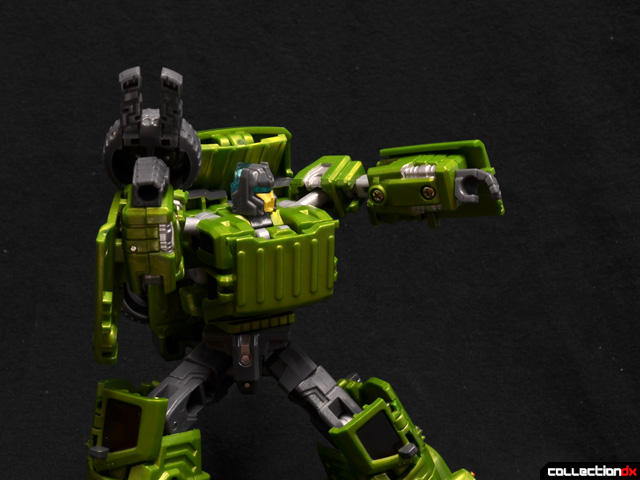 A small detail I really appreciate is that Grind Rod has two different hand sculpts. The right fist is the traditional closed fist sculpt with a 5mm hole, but the left is the more modern style open hand with a 5mm grip. It adds a subtle bit of variety that breathes life into some poses. 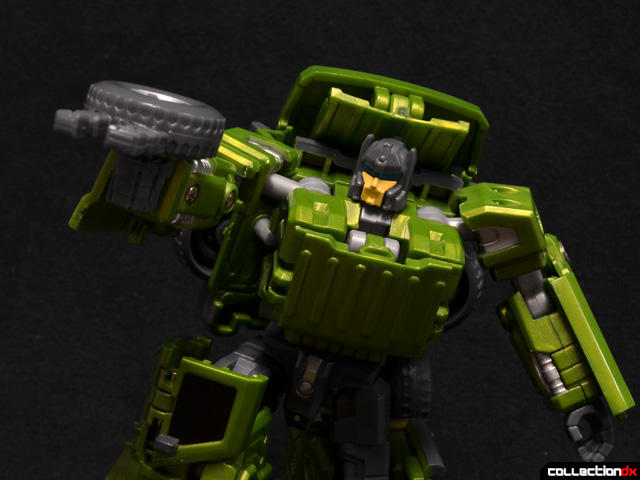 The gun design is a little weak, but again I appreciate the effort. A transforming hidden weapon is much cooler than a gun that does not store in vehicle mode. 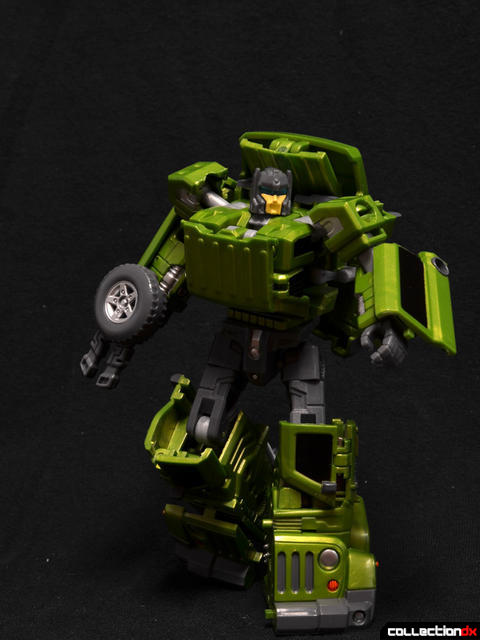 Grind Rod's chunky feet provide ample balance for some heroic striding. As I said above, Grind Rod is not a particularly ambitious toy, but he is an excellent figure nonetheless. The transformation is satisfying and both modes solid fun. Grind Rod retails for $69.99, which is a hefty sum for a Deluxe-sized figure. Fans of the character and fans of cool transforming robot toys should give him a look, but the price is probably a bit high. If the gestalt works out, the price might make more sense, but we do not have much information to go on in that regard. As a standalone figure, Grind Rod is an impeccably made third party Transformer figure that's probably ten or fifteen dollars too expensive. Still, I really enjoy him in hand and think he's worth a look.

I agree that this guy is a good solid figure. He is not spectacular, but does everything that you need well.The problem is, that with zero interest in a 'Puzzler-type' combiner and with all of the neo-Throttlebots having similar transformations, I dont really feel the need to get basically six variations on a theme. Plus, TW are really dragging their heels for the third in the series and there is speculation that the line has been dropped or been shelved, which would be a shame. I would be very interested in their take on Wide Load, who looks like some kind of military off-road monster in this iteration.

If they delay much longer, I might need to pick up Aurora.

I think Grind Rod is suppose to be a Jeep Wrangler with a hard top, Aurora I believe is a Land Rover Evoque.

I think you are right. I'm not a car guy, looks like I got my 'Rovers' mixed up with Aurora, who is totally a Land Rover Evoque.

I've got one of these guys myself and like it quite a bit. The right arm on mine is awfully floppy, though, but the rest is fantastic. Plastic quality is excellent on this guy - much better than on Hegemon (or on Hard Bone, their not-Hard Head headmaster clone)..

I'll have a Hard Bone review up soon. I am so in love with the design I am willing to overlook a couple minor QC issues :)