Go Nagai’s UFO Robot Grendizer (internationally known as Grandizer, Goldorak, or Goldrake) remains one of the most beloved Super Robots of its era. The anime was the first of its genre to be widely exported and still enjoys popularity in Europe and Middle East.

High Dream has been digging into the property with gusto, releasing an impressive array of Grendizer product. The Grendizer Dam Base is in the tradition of the classic Popy super robot bases of the 70’s.

The base for Duke Fleed and his cohorts lies within a Dam, and springs to life when the services of Grendizer are called upon.

The Grendizer Dam Base arrives courtesy of High Dream Corporation.

The base comes in a simple, well-illustrated window box. The box is surprisingly heavy. 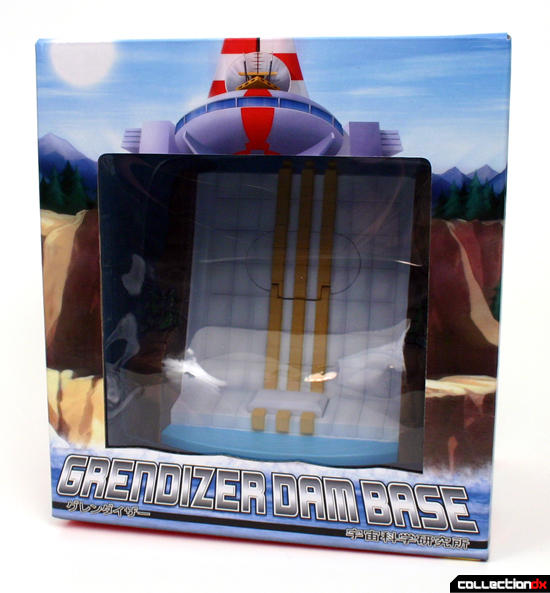 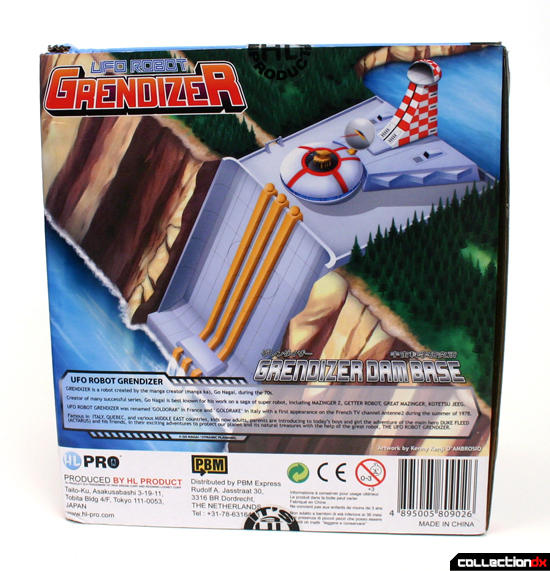 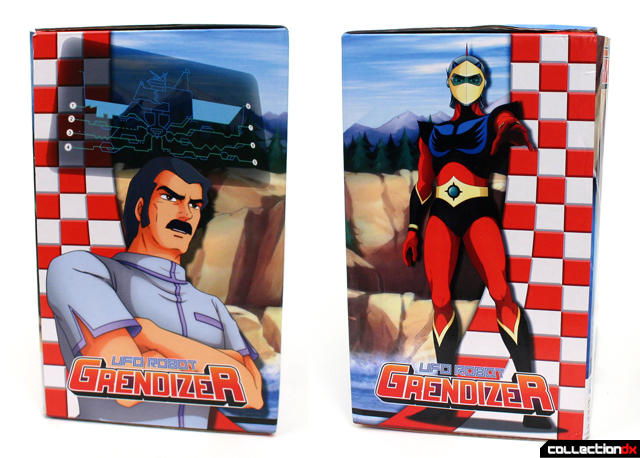 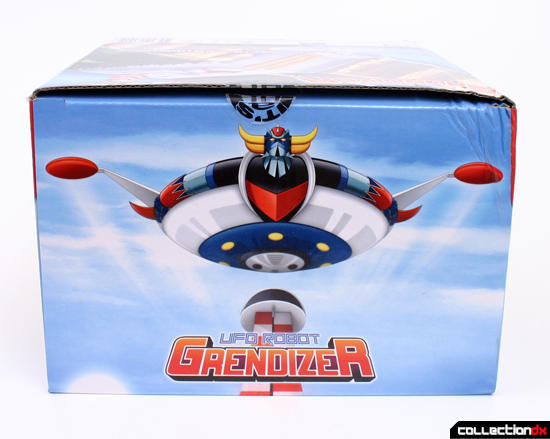 Inside, a plastic clamshell houses the base, and a tiny Spazer is packaged separately. 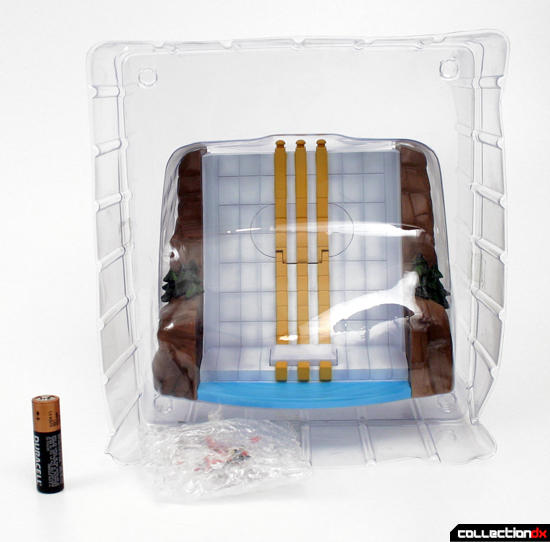 The Dam is a sturdy block of plastic and diecast. The whole front sloping panel is metal! You could use this thing as a bookend if you so desired. 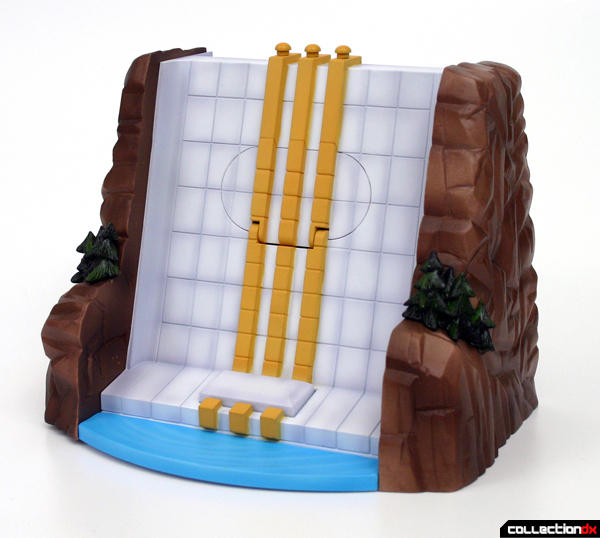 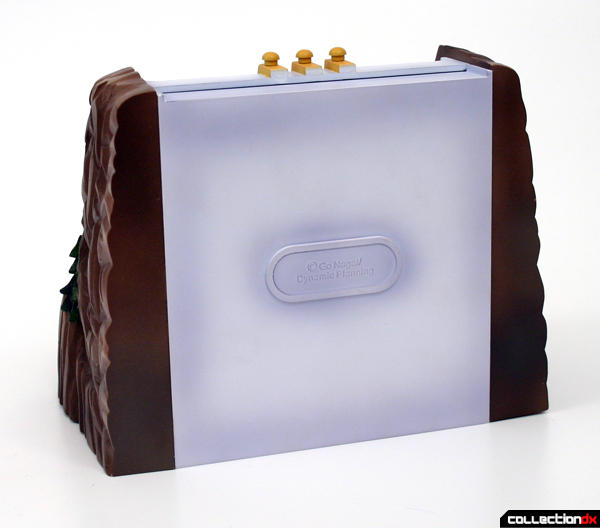 The paint applications are subtle and effective. I like the detail on the trees and the airbrushed shading on the front panel. Notice the rectangular protrusion at the base of the dam. That will come in handy when it’s time to launch the Spazer. 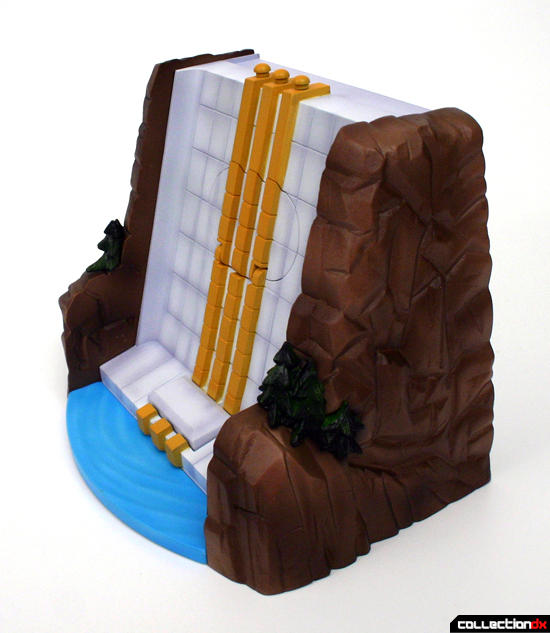 I’m confused by the absence of the beautiful base building at the top of the dam. Go back and look at the back of the box. Why couldn’t they include that? The whole piece looks dramatically plainer without it. As is, it’s just a model of what could be any dam. A real missed opportunity.

The included Spazer is impressive for such a small piece. It’s diameter is just one inch, but the paint apps and sculpted details are outstanding. 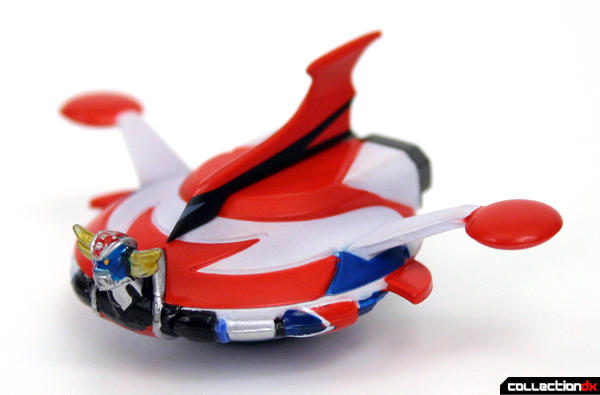 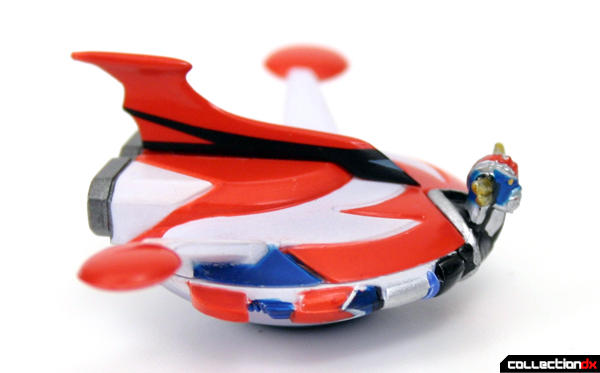 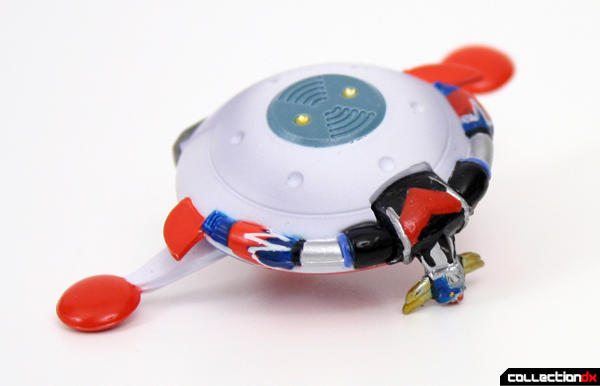 This set has a single play gimmick. A panel in the face of the dam folds down to reveal a launching bay. 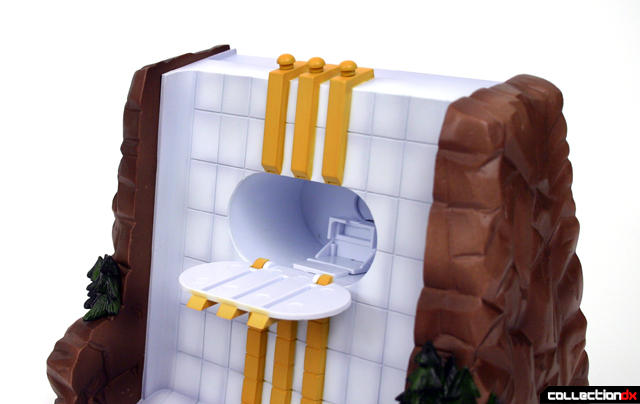 The Spazer fits nicely into a spring-loaded launcher at the rear of the bay. 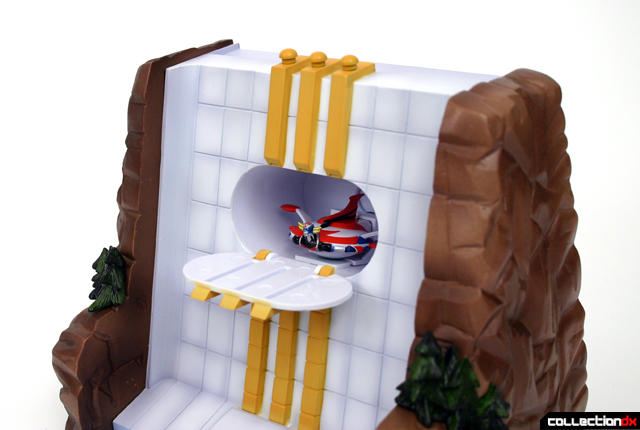 You need only depress the mechanism an eighth of an inch, load the Spazer, and press the button at the base to launch. Try as I might, this was the best action shot I could get. 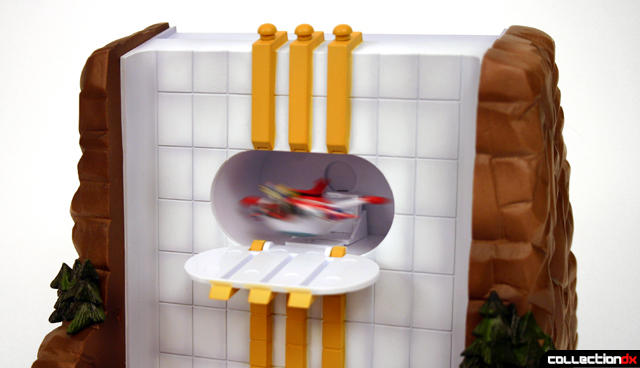 The vehicle launches a good 8 inches or so. I appreciate that it doesn’t fly across the room. 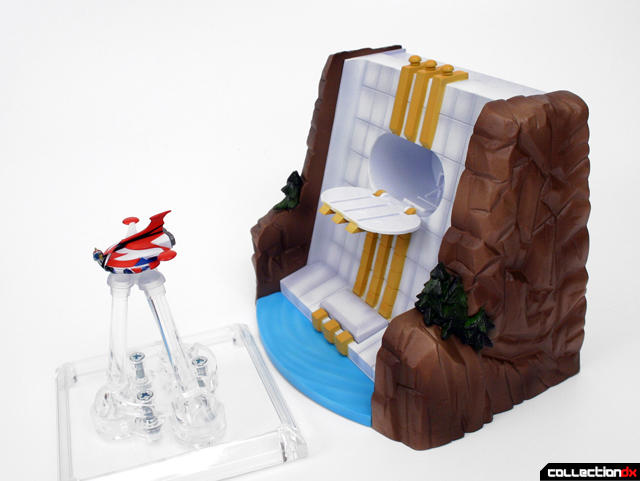 As I said, there are no other play features here.The Popy PA-63 Grendizer base was loaded with beautiful and intricate gimmicks, metallic and clear flourishes, fold-out panels, tiny accessories. You can get lost in that toy, imagine yourself actually running around inside.

The High Dream base is going for something different. It feels more like a high-end desk accessory than a proper toy, which is fine, but disappointing nonetheless. Everything is executed very well, I just want more.

14 comments posted
I have no interest in

I have no interest in Grendizer nor do I know anything about it other than that it's one of the grandfather's of the super robot genre, but I can also see that missing the top-back half of the base really takes away from it. They could have had room to have a flip-top control room, some geared gimmick(s), or anything up there! Like you said, nice to have at last, but clearly suffers quite a bit.

Are they perhaps planning to make a companion section of the back-half of the dam with its own gimmicks in the future that butts right up against this one?

A very interesting point, Eva. The top has a lower shelf where a flange could easily fit over. That would be a great concept, and I'd certainly pick up the companion 'back end' if it were compelling enough.

It just seems kinda overpriced for what you get here, and the back is so flush that it made me wonder if something couldn't slide in right against it.

LOOL i love that you used an Arabic clip for the review. Indeed Grendizer was (and still is) extremely popular in the middle east, so much that when i visited Japan i was asked by a middle eastern friend to bring back a Soul of Chogokin Grendizer. Surprisingly, it was very hard to find, i suppose either Grendizer hasn't aged well like his predecessors (Mazinger and Getter robot) or that it simply wasn't popular among the Japanese masses. Non the less, i know some people who would pay top dollar for this. Speaking of which, I'm still waiting on that Mazinger base that Bandai promised us when they launched the Super Robot Chogokin line !

This is the best dam toy I have ever seen!

...someone had to finally say it.

better him than me

True, the top is done that way so it can receive another part of the dam space science lab, we did not start to work on its design yet though.

thats great to hear, I had a feeling, like others here ,that that would be the case

I'm really sorry to post right after HD staff , here, but my HO is that these toys are such a waste of an opportunity. I personally hate every single release they did. I'm italian and, as you can guess, I'm a big fan of Goldrake, as are many of my fellow italians and seeing HD putting out one lackluster release after the other is really hurting.

Their lacklusterness, for me, resides in the close to zero play value any of their items have, the non-gimmickness of the things.

These are basically metal scraps. Very expensive ones, too.

I never bought anything by them, but I've seen and had the opportunity to evaluate quite a lot.
A month ago my sister bought me the TFO as a birthday present and I could not help but notice that a nice plastic LED light up cockpit would have given this thing a nice kick up the a**, playability -wise. A firing missile too. And what about a coupla Alcor's (Koji) miniatures? One standing and one piloting, maybe?
On top of those wild desires, come the real letdown: the paint job is nice, but the color is awfully green-hued, really can't put it beside the beautifully designed(color wise) Bandai SOC.
The POPY-styled box is indeed a nice touch.

I could speak in similar terms of most of the HD line, producing things that I would love to own in Toy form, if they ever would design 'em as such.

The Dam base is really laughable, even considering the subsequent adding of the rest of the lab. What's this thing? I'd be all for a nice series of well-designed parts that in the end form a Grendizer base as we remenmber it, but this? Really? A Grendizer Hangar all white, only a few inches deep, with no decoration whatsoever? I would have supposed, that , if you ever planned to produce such a base, you would at least have tried to recreate a little bit of the inside, something that did not exist up to now.

What it seems to me, really, where Bandai took the High End Products of yesteryear and made them even better, streamlining designs, while retaining proportion and adding, if anything, play value, HD is simply taking the cheap toys of said era(think Hydargos Ship from Fabianplastica), mold them in metal and put them out at outrageous prices.
Sure, some of their releases have better proportions, but... Hydargos ship, 120 $ and not even an opening hatch with a launchable monster?

Sorry for the lengthy post (and a fair bit of OT), but these products bug me to no end, and the upcoming release of Giru Giru and Duke's motorcycle only adds to my anger in seeing products that I'd always desired produced in such a poor fashion...

can't please everyone :P Zmaz, nothing new there.

...As I'm sure you have your good reasons for what you do.

It's just a shame from my tiny POW...

I am looking forward to the top portion for the dam. Am pleased with the dam base, and awaiting Giru Giru........that will be the first enemy saucer robot I believe.