Since their exciting display at New York Toy Fair back in February, myself and other monster fans have been eagerly anticipating the release of this new line of collectible monster figures and the wait is nearly over. The first batch of figures is expected to arrive in just a few short weeks, but I've been lucky enough to get an advance copy of Gort, courtesy of Amok Time, and I'm glad to be able to bring you the review. There is still time to pre-order Gort.

Gort, as we know, comes from the classic movie The Day The Earth Stood Still.

This figure is approximately 16" tall is made out of thick, sturdy vinyl. It features 6 points of articulation, at the neck, shoulders, waist and ankles. Their head is sculpted nicely with sharp detail on the visor and where it connects to the helmet. There are even sculpted holes on the chin to replicate the air holes in the original costume. You'll hardly ever see these, but it's nice to know that the detail was not neglected. Since the design of the character is simplistic by nature, it really lends itself well to the vinyl format, which typically eschews complexity in favor of old school charm. 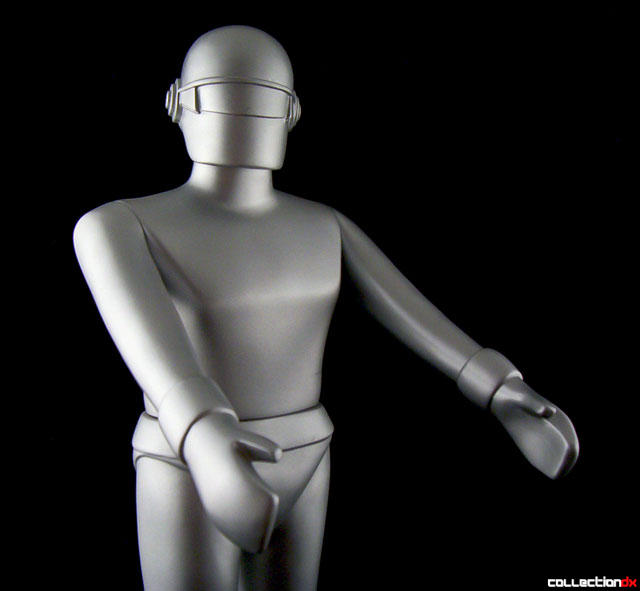 The toy has a commanding presence due to it's large size. In fact, one of the first things I did when getting this was to compare it to the similarly sized Rocket Pro resin statue. Although nearly the same height, this toy dwarfs the statue. While the statue falls just short of it's advertised height, the Amok Time toy actually exceeds it. And when stood side by side, the difference is striking. 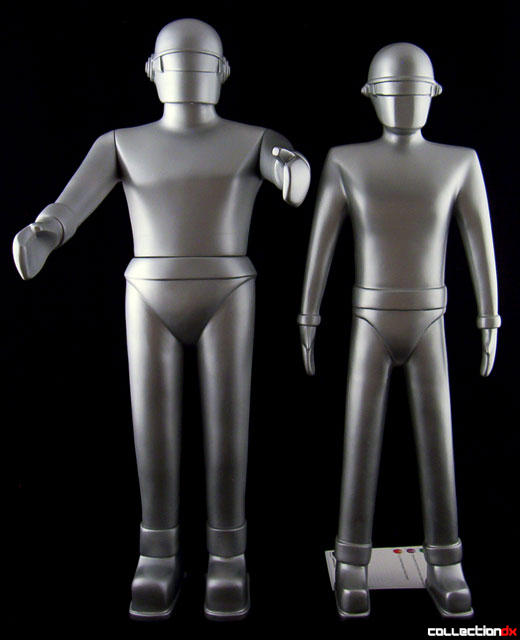 As you can see in the pictures above, the toy is also sturdier on its feet. I needed to support the statue with some old hockey cards so it didn't fall over. And even if the toy did fall over, well, it's vinyl and isn't likely to break like resin. Oh, and the toy retails for half of what the statue does! 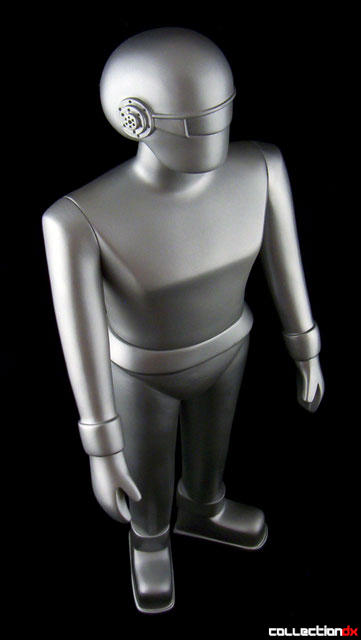 Unlike the traditional 'bag and header card' packaging format that we're used to from Japanese vinyl companies, Gort comes in an 18" tall collectible display box, resting in a clear plastic tray and secured by twisty ties. Keep those ties in case you decide to store the toy back in its box for any reason. Without them, Gort will fall forward and rub against the clear window. 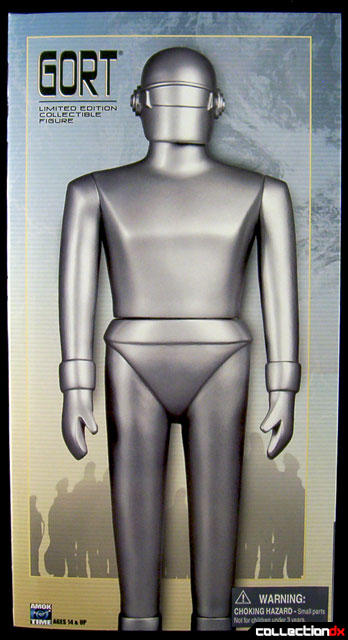 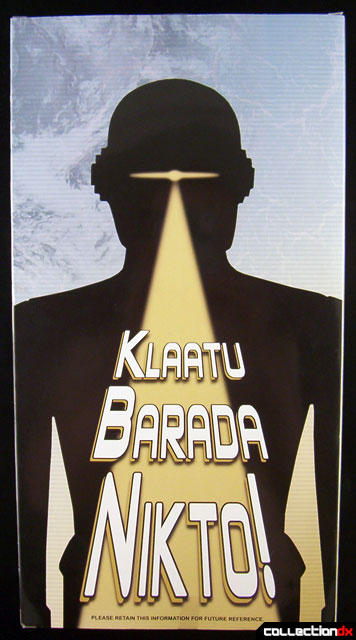 Both sides of the box are nice, but I like the back better where the famous phrase "Klaatu Barada Nikto" is printed with clear instuctions to memorize it. Knowing this phrase could save your life someday. Don't be the sap who forgets it.

I really like the toy and think it's the best Gort yet. Of course, few toys are perfect so if I had to pick something that I might have changed, it would be to add a joint in the wrists to turn the hands. I know most vintage vinyl toys don't necessarily have a joint there, but something about the way the cuffs on it's wrists are sculpted just cry out for articulation. And, of course, a visor that opens up and shoots a death ray, incinerating my enemies would have been nice, too. Maybe someday. But until then, I suggest you head on over to Amoktime.com and get yourself a Gort.

Cool looking peice dude. Love the box art as well, have always thought that if you were gonna have a Gort that it'd need to have presence like this thing does.

This toy is absolutely killer! I'm loving the proportions and the sculpt...truly worthy of such an important film.

It's so funny how a 16" vinyl would be considered "giant-sized" for a Japanese kaiju toy, but at only $75! That's just too good to pass up.

Now, all Amok Time needs to do is release a variant of this toy shot in glow-in-the-dark vinyl...

Funny you should mention the price in a positive light. One of the members of the Universal Monster Army mentioned he thought it too expensive for the type of toy it is! But most of the monster collectors aren't used to paying $160 for a 13" vinyl (or whatever) like Japanese toy fans are. So, to us this looks like a bargain! and to then it looks too high. Which means it's probably priced just right...