Although, unfortunately, we here in the United States never got a jumbo Grendizer as part of Mattel's Shogun Warriors line-up, the same can't be said of the lucky folks in Europe. While the character was a favorite among the people here who saw it as part of Jim Terry's Force Five program, that just doesn't compare at all to it's popularity in other countries. In many places, Grendizer is as big or bigger than Superman is here and merchandise for the character is plentiful.

The character is known by several different names, though. Of course, the original Japanese name is UFO Robo Grendizer (UFOロボ·グレンダイザー), while I knew him as simply "Grandizer" when I was young. In Italy, he's called "Goldrake" and his French name is "Goldorak". I know of at least three different countries that Mattel produced a jumbo in. Italy and Germany had jumbos that were designated as Shogun Warriors, but this one here produced in France simply says "Goldorak". There is no Shogun Warriors logo to be found, although it is clearly from the same line and in fact the box does say "Axes and missiles not for use with all Shogun Warriors" on the side.

It's often said that this toy is the rarest of all the Shogun Warriors and while there may be some truth to that, the fact is that it's not really hard to find. You just have to be looking in the right places. This toy seems to have been produced in HUGE numbers in Europe. I see them all the time. The trick, as it is with most jumbos, is getting one complete and mint in box. Beater specimens can be found literally at any given time, but "MIB" is much harder.

As you can see above, the Mattel version, in keeping with Shogun Warrior tradition, is much different from the Popy version. The Popy version is so much better it's not even funny. I'll recap some of the unfortunate changes that were made now. 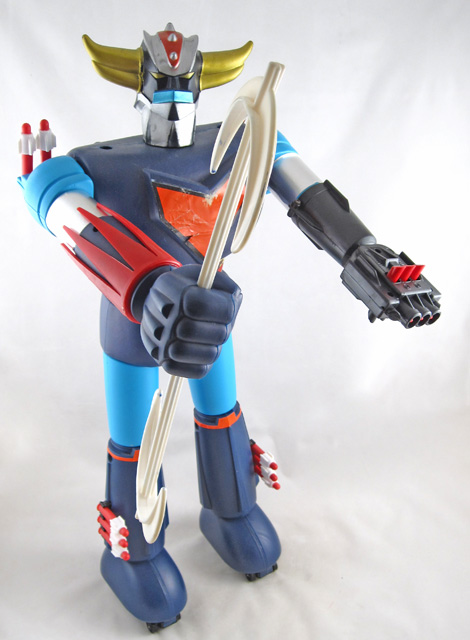 The most obvious change was made to the left fist. Once again, like the Shogun Warrior Great Mazinger, Mattel pulled off the left hand and replaced it with a missile launcher. Yes, this adds more play value and yes, some people have fond memories of that, but c'mon, seriously, it looks like garbage compared to the beautiful symmetry of the original. Furthermore, if you wanted more play value, why would you actually remove the launching mechanism on the right fist? 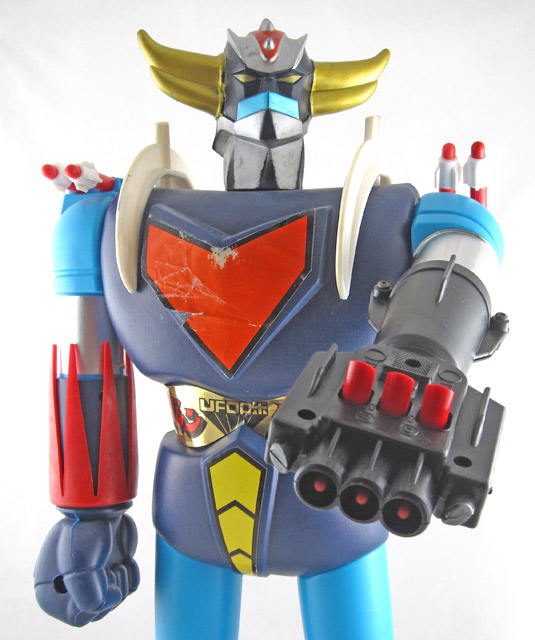 To Mattel's credit, they did retain the connecting double hariken gimmick. However, the mold on their version is much less sleek and really looks ugly. The way it rests in the shoulders just looks unnatural. But they do still connect at the ends. 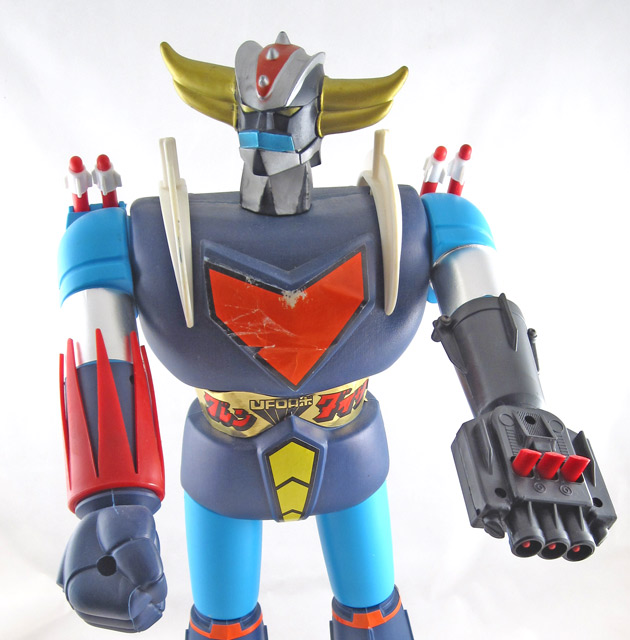 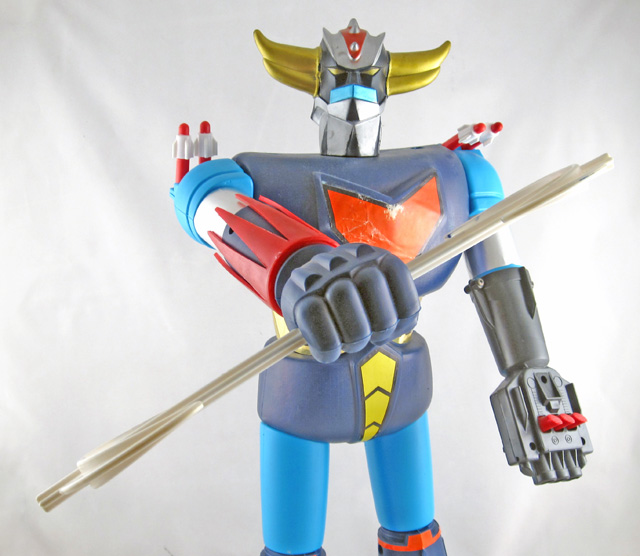 The hinged neck of the Popy version has also been simplified. I wish they'd kept it. It just looks more appropriate. Something just feels like it's missing now when you look at the neck here. It would be nice if the paint was nicer too, but this is from a time when toys were toys, not "art", so I don't mind it too much. 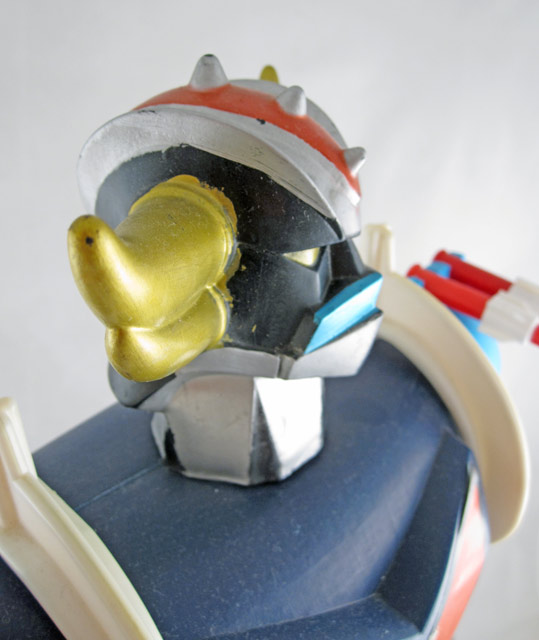 Anyway, enough griping about the changes to the gimmicks. Let's now gripe about the mold changes, shall we? Much of the molded detail of the Popy toy has been replaced with stickers. The beautiful vinyl chest piece? Now a sticker. The separately molded knees? Sticker. And the exquisitely crafted pelvic area on the Popy? Yeah, sticker. 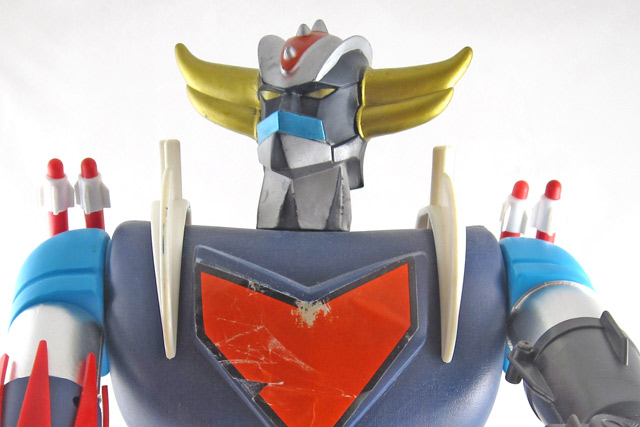 It couldn't get worse...can it? Well, yeah, unfortunately, it can. Because the beautiful, specific to Grendizer feet from the Popy toy were yanked off and replaced by Great Mazinger's feet. And, although unlike the Popy version this one can actually shoot missiles, it now only holds three on each leg instead of five. 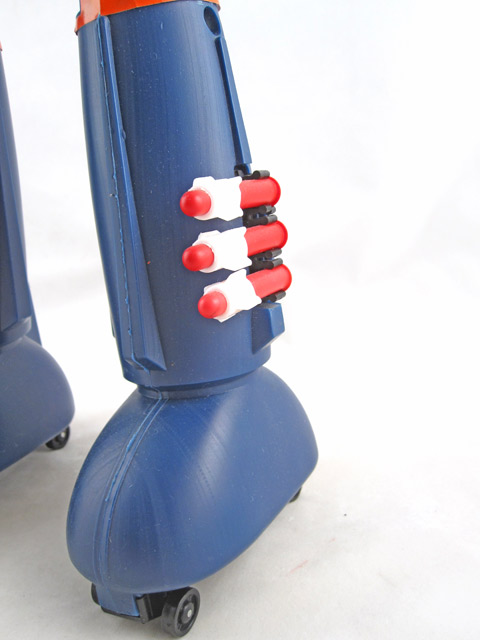 There seems to be other minor differences even among specimens of this toy. The chest plastic on my French one is more blue than the one that JoshB has, which I think is an Italian version. Although I used to own it, I can't remember which one the German version is more like. I do remember that the German one says "Frabrique en Allemagne" (Allemagne being the French name for Germany), while the French says simply "Made In France" (in English!), and the Italian has the Popy logo and official copyright information.

Look, I don't mean to completely slag this thing. I mean, any jumbo is a good jumbo. But to take such a great toy of such an enormously popular robot and dumb it down this way is almost criminal. And I think that subconsciously they may have even known it themselves since the picture of the toy on the box is actually of the Popy toy, except they added a missile launcher on the right hand!

Oh yeah, about that box. This one is different from all the others out there and it's the reason I bought it even though mine has some sticker damage and a bit of warping here and there. This box opens unlike any other jumbo box of it's era. Rather than having the traditional cardboard bottom and removable top, the entire box is one enclosed piece of heavy cardboard with a flap on the top! You have to slide the toy inside and then hold it in place with two flaps that surround it's neck. A very cool and very uncommon variation! 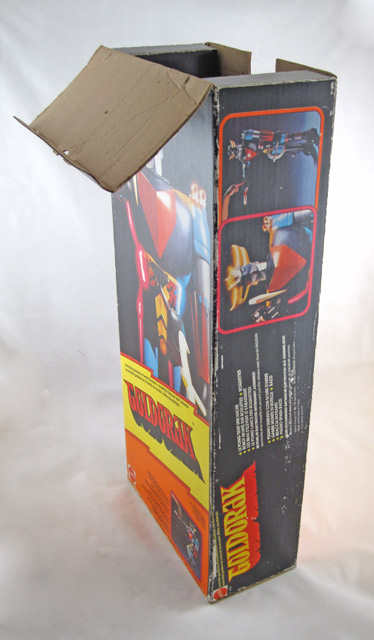 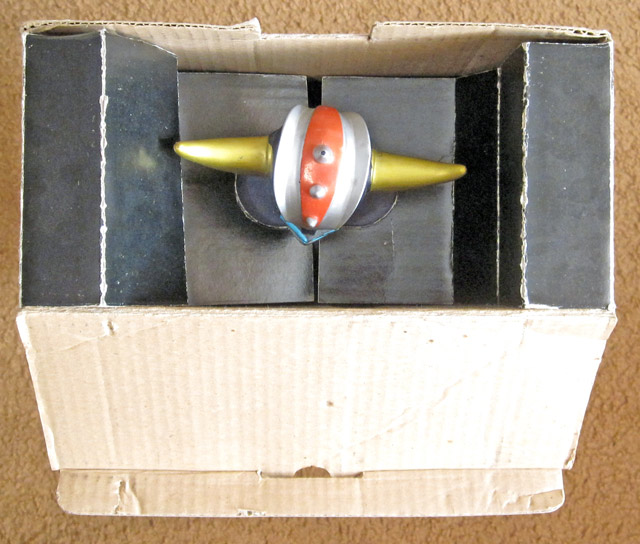 4 comments posted
I love the combo of the

I love the combo of the missile fist and sickles, but the loss of the molded details really is just tragic.

Currently the best representation of UFO ROBOT GRENDIZER/GOLDRAKE/GOLDORAK is the 60cm Jumbo size by High Dream. However, I would like Popy or Mattel to re-issue the JUMBO machinders some day!

I think the whole UFO concept goes well with the music. :D

Any Jumbo Grendizer is a good one.