Those of us who were born into the world of technology and video games probably know a bit about Gears of War. It's a series that reinvented the "duck-under-chest-high-walls-and-shoot-from-a-safe-distance" genre of video games. With every successful franchise there will be entries into other forms of media, and the Gears franchise is no exception. NECA has made figures for this series for years (to varying degrees of success), but this is the first time where I've seen NECA really outshine some other companies when it comes to video game licenses and action figures in general. 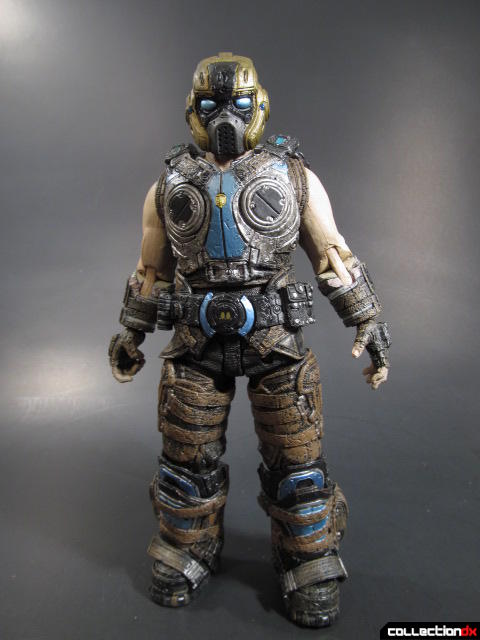 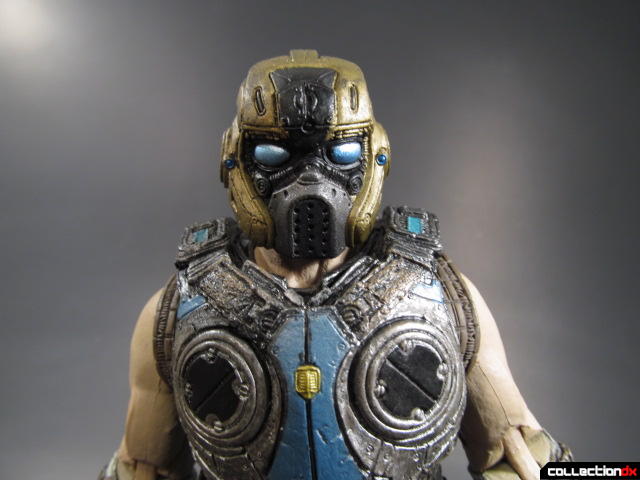 This is a Golden COG Soldier from Gears of War 3. While he isn't actually a character in the game, it is supposed to represent some options you have in multiplayer and so on. Since it doesn't represent any specific character from the game, you could enjoy it for the sake of being a new or undeveloped character that is ripe for bathtub action in the fictional wars of your imagination! 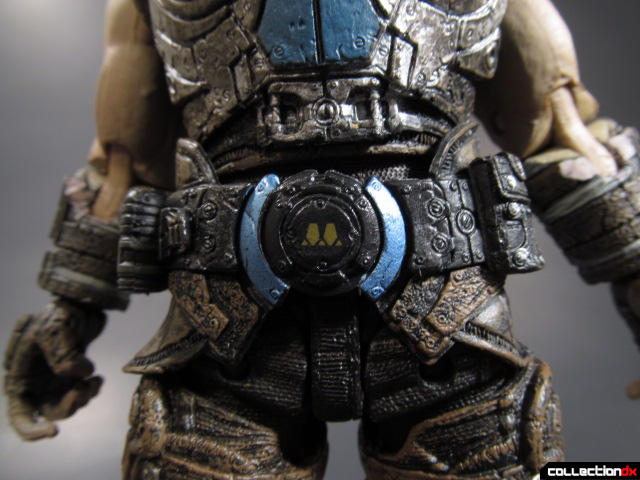 NECA's gritty paint-splatter aesthetics go great with pretty much anything made with the Unreal Engine. There is a TON of sculpted detail here, and the paint applications are actually pretty stunning! Sure, there are a few QC issues with the overspray on the fingertips and stuff, but I can forgive that because of the pricepoint. Seeing this level of detail on a $12-15 action figure is stunning. 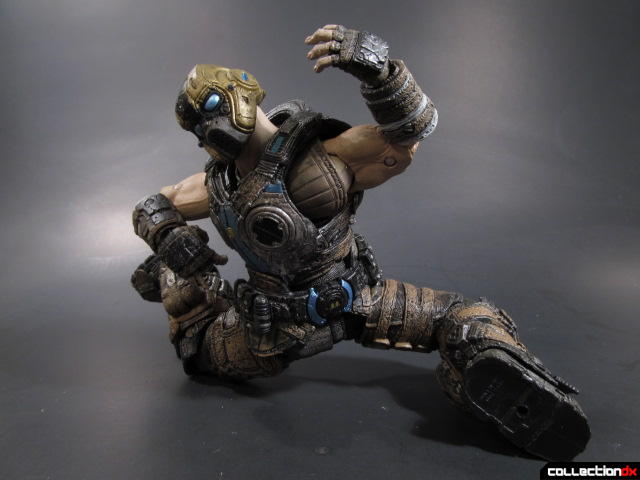 Of course, a great sculpt without articulation is nothing but a cheap statue, and surprisingly, the articulation on this figure is astounding! Most of the joints are cleverly hidden under thin plastic flaps that don't interfere with movement. The legs have a compound swivel that allows them to both jump AND do splits! There is a double ball joint for the neck, ball-jointed chest and waist, double-jointed elbows, universal-jointed knees, double-swiveling wrists, and ankle swivels. The best part of the articulation, however, is DEFINITELY the shoulders. The shoulders are on a universal joint attached to a pectoral swivel! 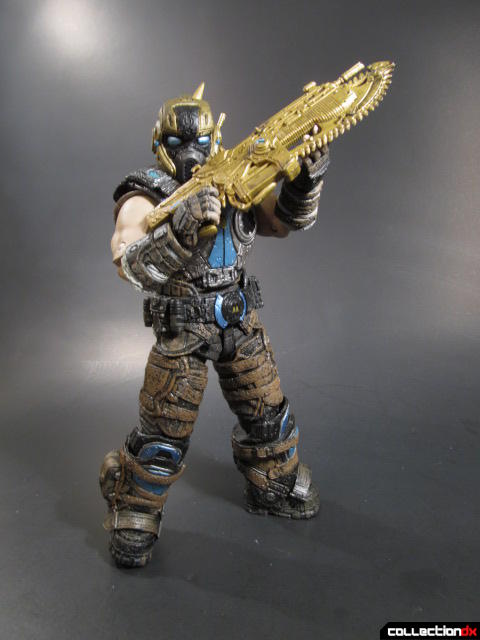 This means that you can put his arms in any pose ever. He can even reach across his chest! I was completely blown away by this guy. 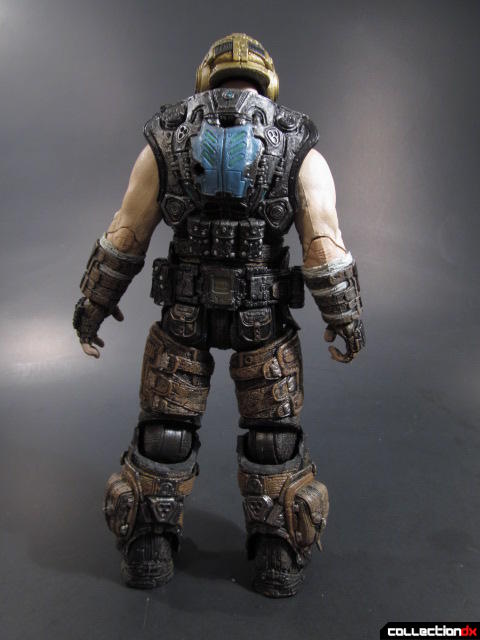 I must mention here, however, that I took a knife and modified the elbows and knees to increase the range of motion. While his range was pretty great to begin with, snipping off the tip of his gloves and the back of his calves gave me even more movement to work with. I would recommend doing that, but it is absolutely not necessary if you are afraid of ruining your figure. 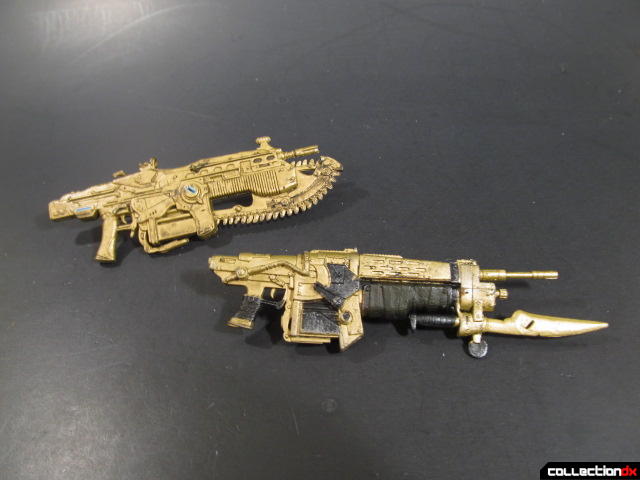 The COG Soldier also comes with both versions of the Lancer. You have the tried and true chainsaw variant along with the "original" Lancer introduced in Gears of War 2. They are both covered in gold paint to match the rest of the figure, and have pegs built into the sides so he can attach them to his back. This was a really neat feature that works surprisingly well. 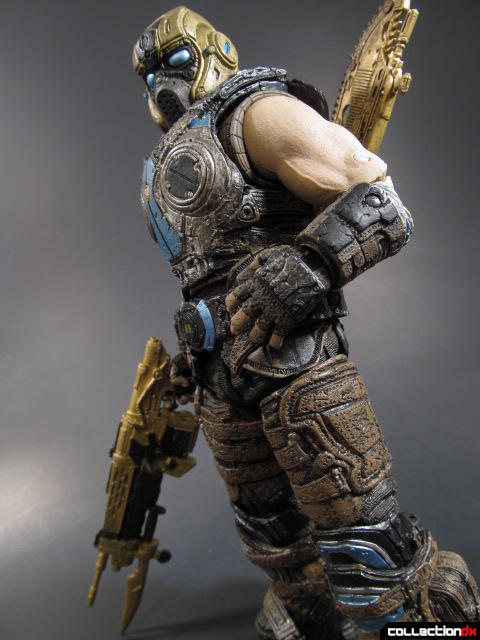 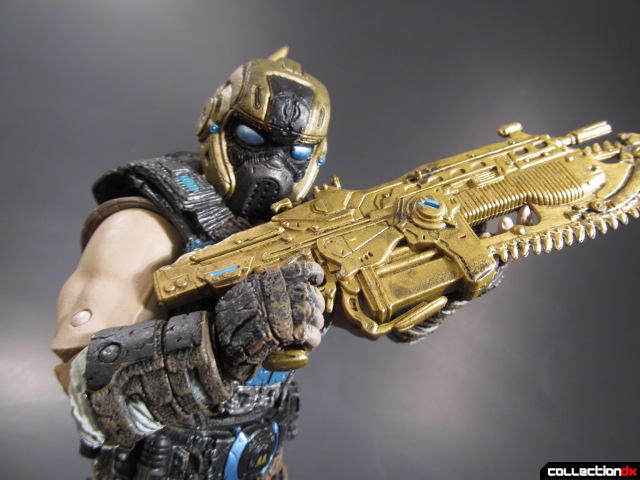 My only complaint here is that his left hand is splayed too far to fit into the handguard of the chainsaw Lancer. It's a bit of a nitpick, but I would have loved to be able to get some nice chainsaw poses out of this guy. So, I'm knocking some points off there! 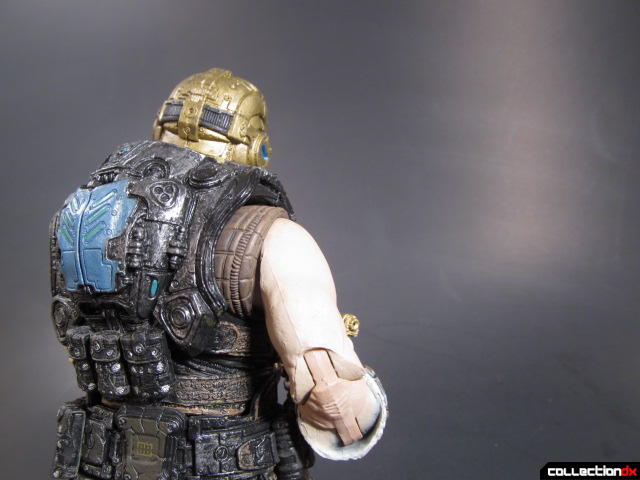 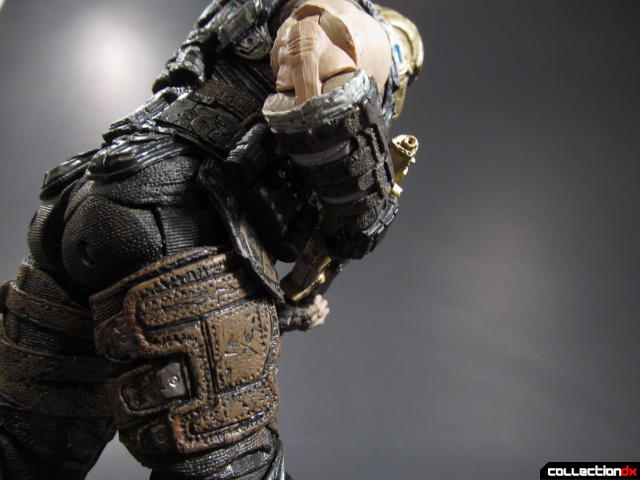 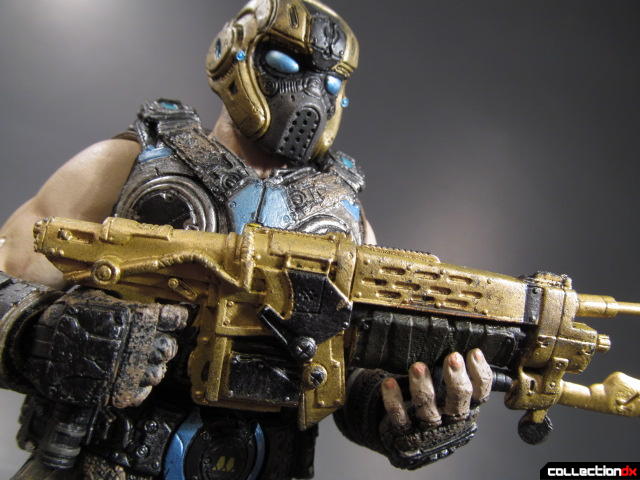 Overall, I was pleasantly surprised by this guy. The other NECA offerings that I have acquired over the years have been fairly lackluster, but this figure was excellent in almost every category! Since these figures came out last year, it's possible that they are going on clearance sale at most Toys R Us's. In fact, I picked mine up for $13. For that price, you CAN'T MISS picking one of these up! I'm telling you that if you like Gears of War you MUST run out right now and FIND ONE. 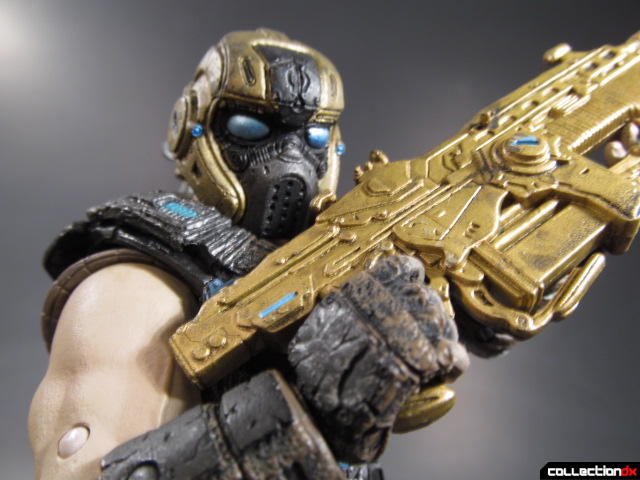 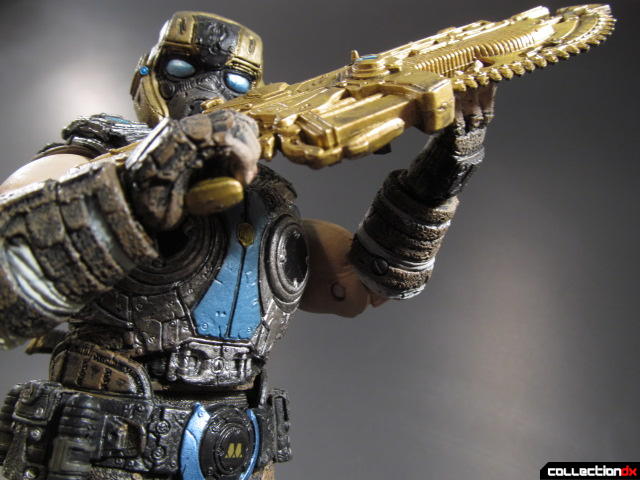 Nice review Jmann! The paint is exquisite for a toy at this price point, and that gold is really nice. However one thing that I can't get over is how cutely proportioned he is! It's fat and chunky and the head is quite large, giving him proportions more similar to a baby than a big muscular "badass" that the game evokes. Look at dose chubby widdle cheeks!

I picked up the other COG recently with the Lancer and shotgun with the added articulation and he is excellent as well. I've not played Gears yet, but these recent figures deliver some wonderful chunky hyper-detailed space marine fun. I'm tempted to find this guy as well, but those doughy bare arms just don't look quite right. Maybe they'd seem less blah with a couple tattoo decals on them...

I actually really like the doughy arms. That's what they look like in the third game. For some reason they thought, "Hey, let's make them sleeveless so we can show off their perfect skin!