I think we all breathed a sigh of relief when the design for Gareth Edward's Godzilla was unveiled. It's a new take on the iconic monster, but it keeps enough of the hallmarks to make him instantly recognizable. May 2014 cannot get here soon enough.

In advance of the movie, some of the merchandise has been hitting stores. Bandai's offerings are sort of terrible at this point (which is surprising, considering it's one of their flagship brands. It should have been a no-brainer). NECA's have not arrived in stores yet, and the biggest, most exciting release has come from a suprising source - Jakks Pacific.

Jakks has released a 24" tall Jumbo-Sized Godzilla from the new movie. It not only looks good, but it FEELS like the old Shogun Warriors Godzilla. All that's missing is wheels on the feet and a firing fist. 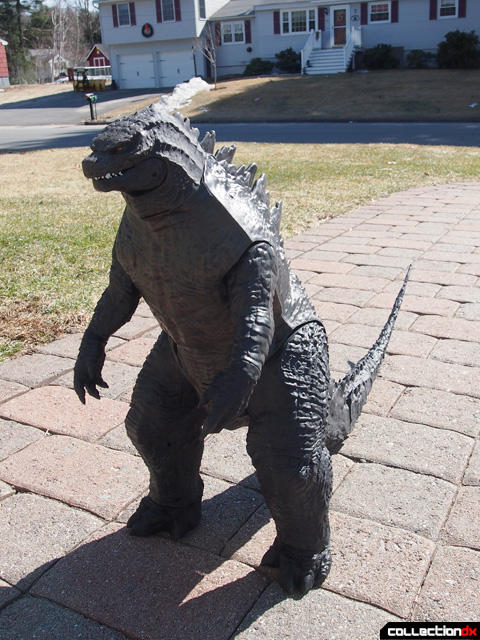 So you say, "whats the big deal?", there are plenty of big Godzillas. But not only is this one 24" tall, it's OVER THREE FEET LONG. To say this is immense is an understatement. Collectors are going to have a bitch of a time finding a place to put this. Clear out about 43" of shelf space. 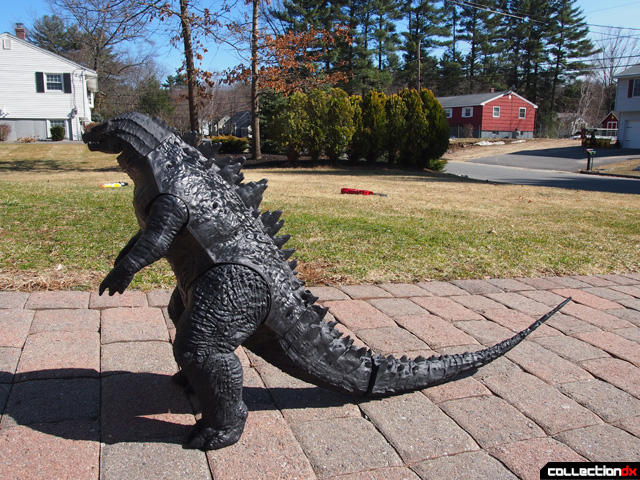 Godzilla retails for about 50 bucks and comes in a large window box. It's virtually impossible to save the box as you remove the toy. Inside Godzilla is accompanied by a few tail sections that need to be assembled.

As you assemble the tail you may notice what looks like a battery cover where the tail attaches. This is for a sound gimmick that was abandoned late in production. The holes for the speaker are also still visible. 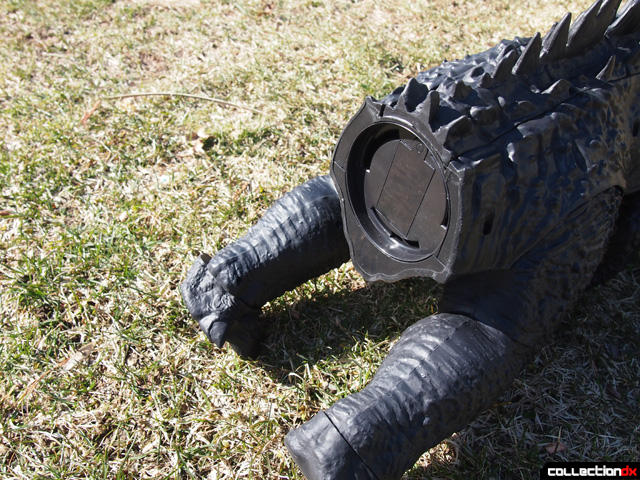 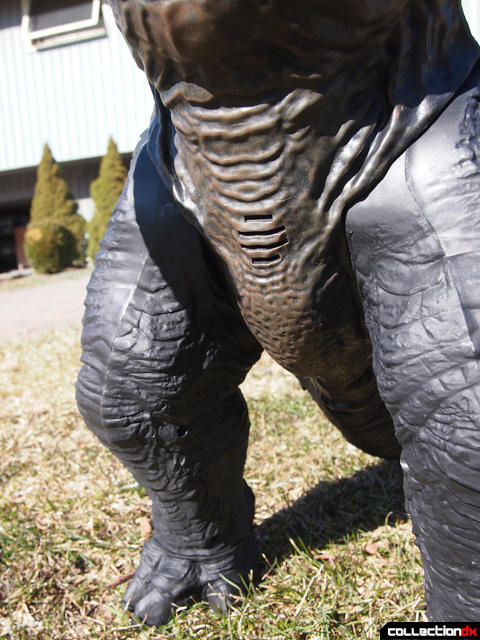 The head swivels and the jaw opens, revealing a nice, bright red tongue. I'm sure i's not accurate to the film, but it FEELS right. You know what I'm saying? 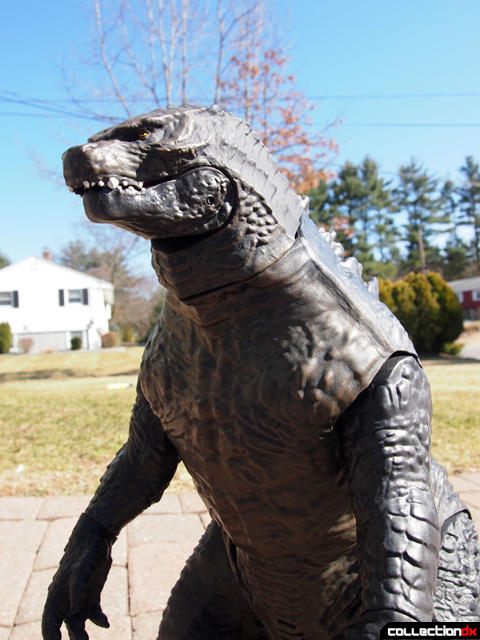 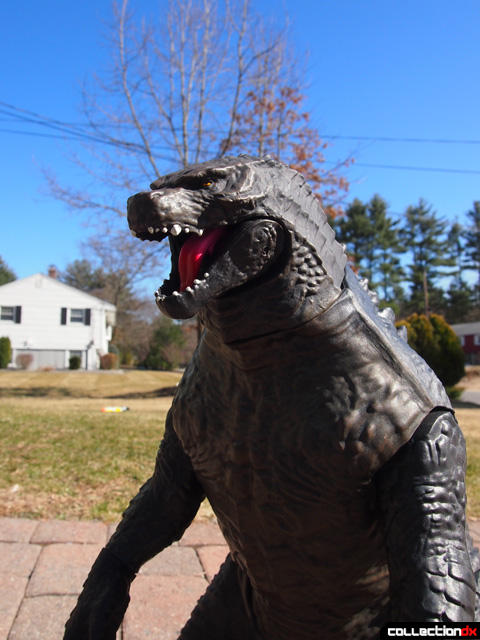 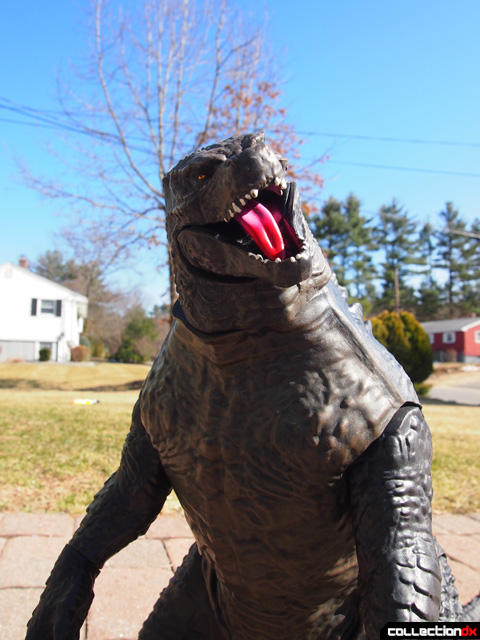 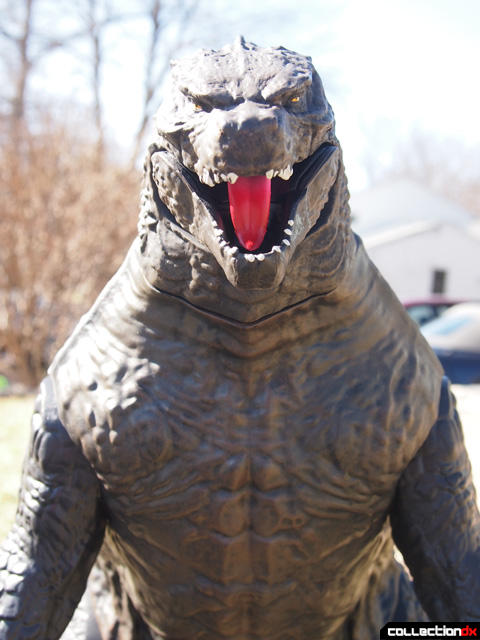 The head sculpt is just awesome. It's the best look at this new Godzilla design yet, and it's an instant classic. 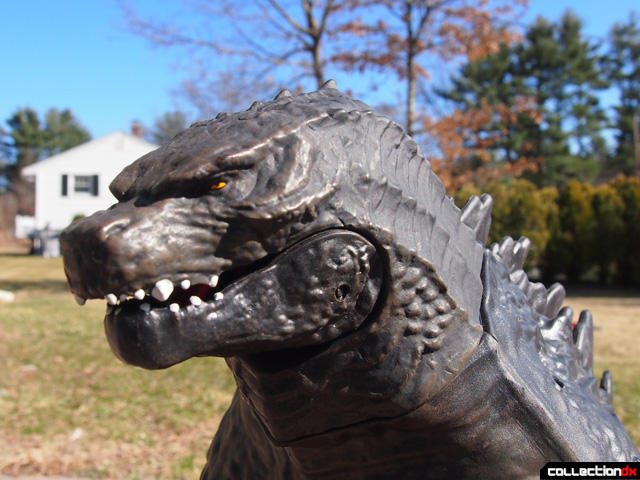 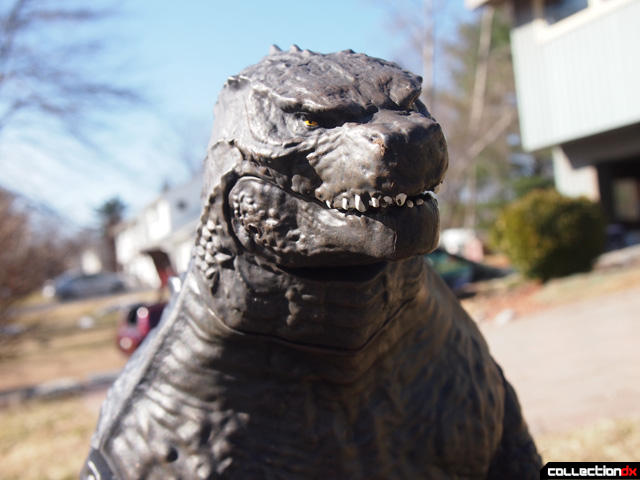 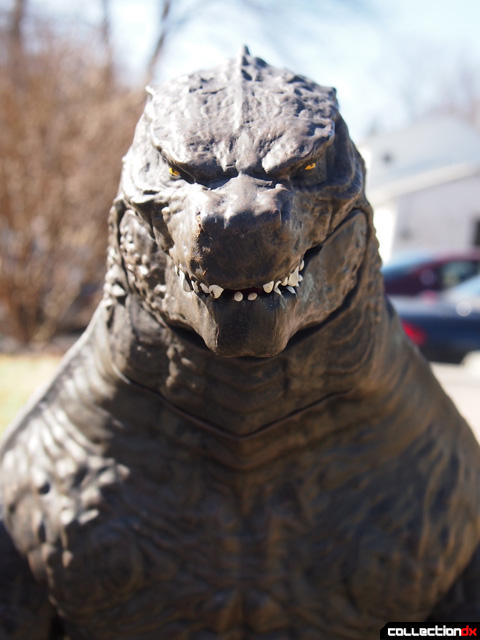 The thing has such presence. It towers over most other toys in your collection. He's so big I had to shoot him outside as my light tent is just not big enough! 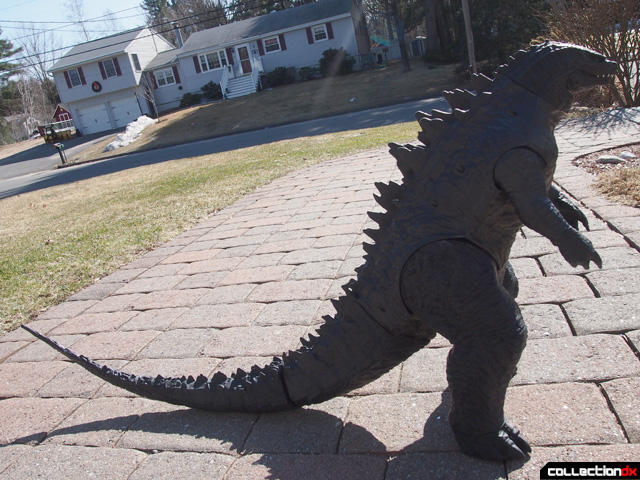 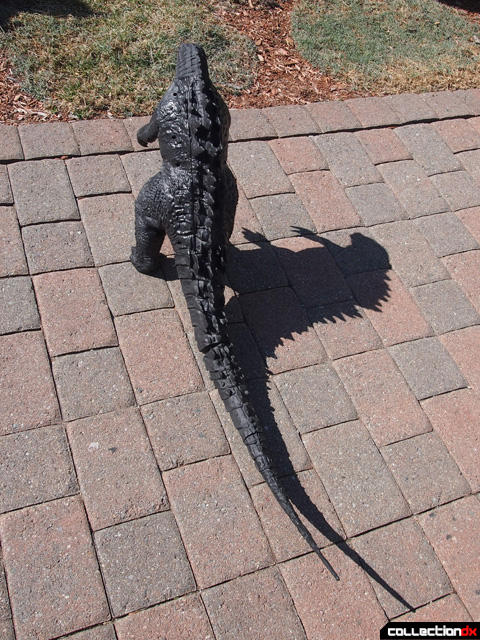 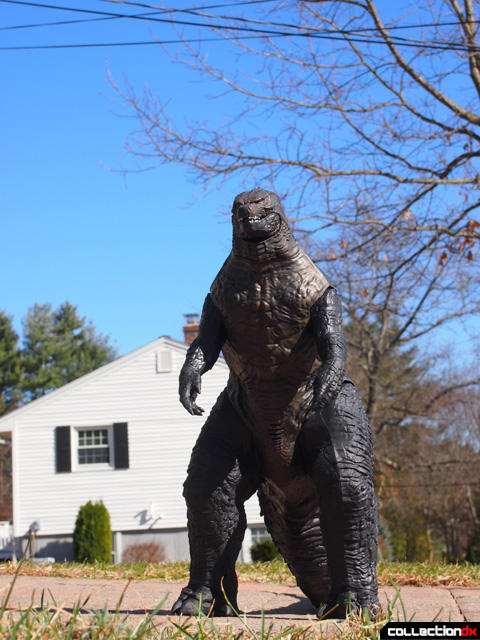 To give you a sense of scale, here's Godzilla on my Skateboard. Yes, I am 40 and I skateboard. 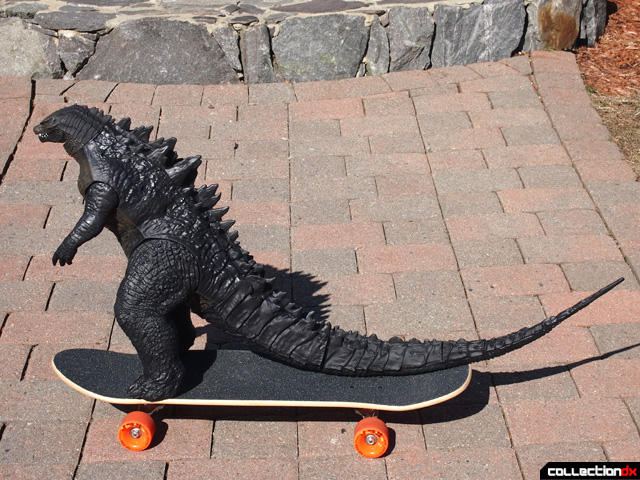 And also Godzilla next to Rosie. Who would win in a match? 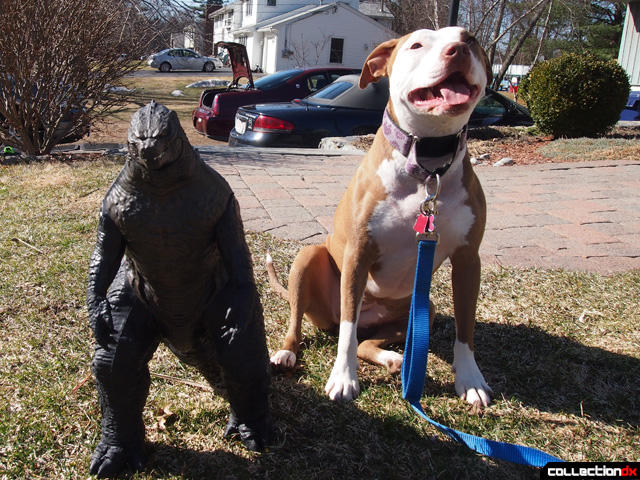 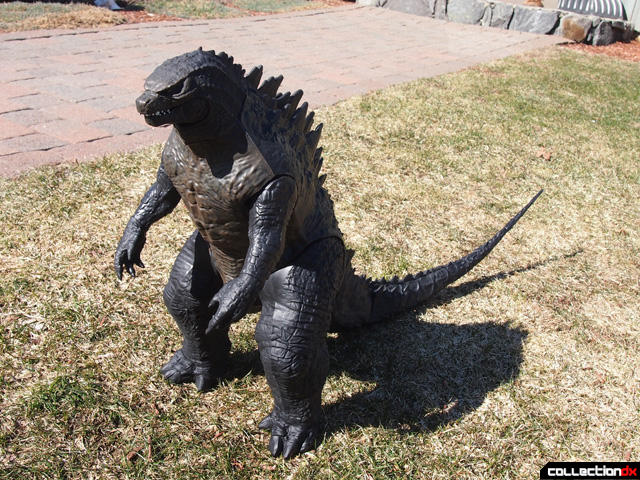 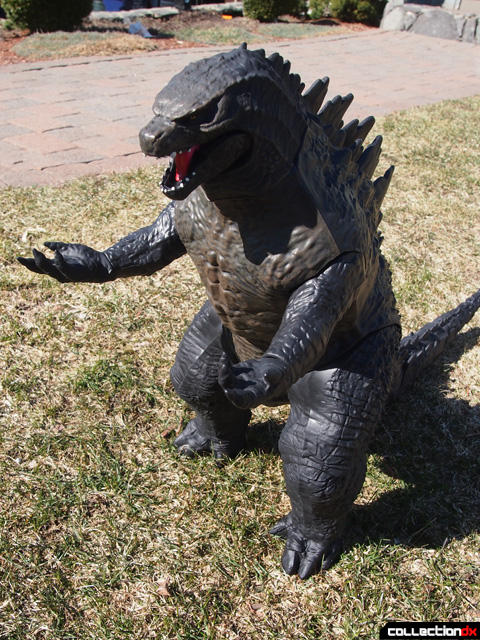 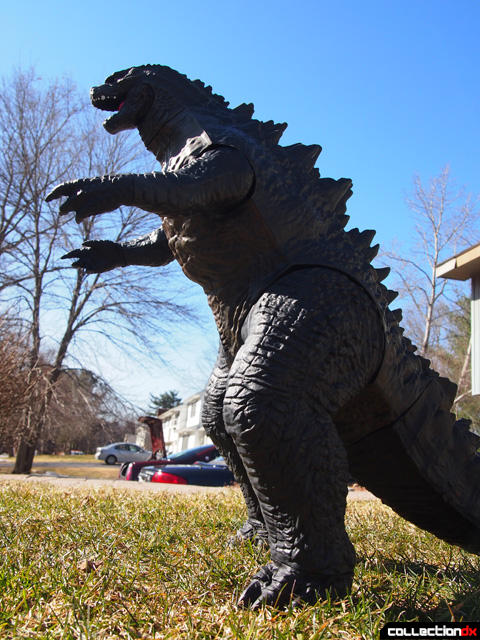 the legs swivel at the hips, and oddly, the feet swivel at the ankles. Not a lot of need for a joint there, but hey, more articulation. 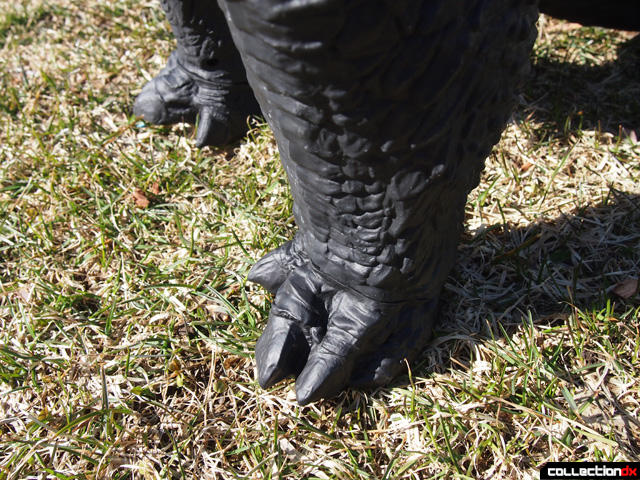 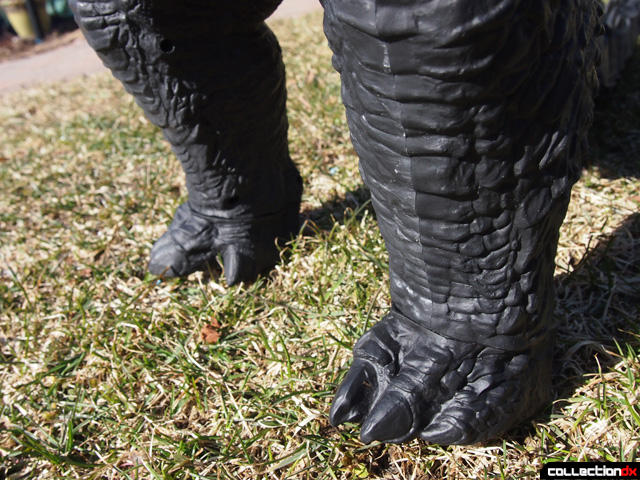 The makeup of the toy is hard plastic with some areas of rubber. The spikes on the back are rubber. Note the screw holes on the left side. A bit unsightly but hey - kids toy. 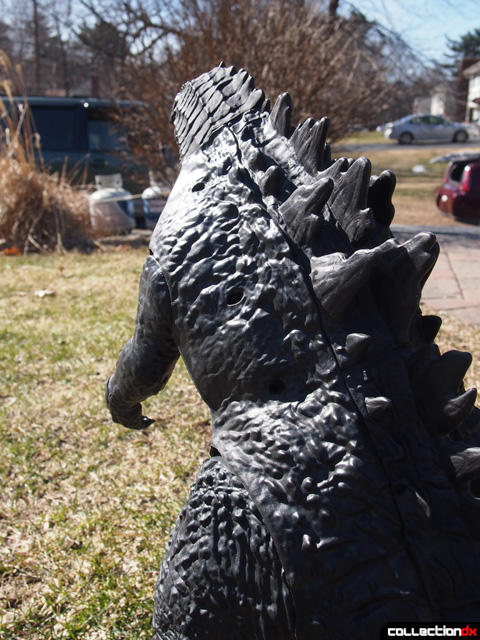 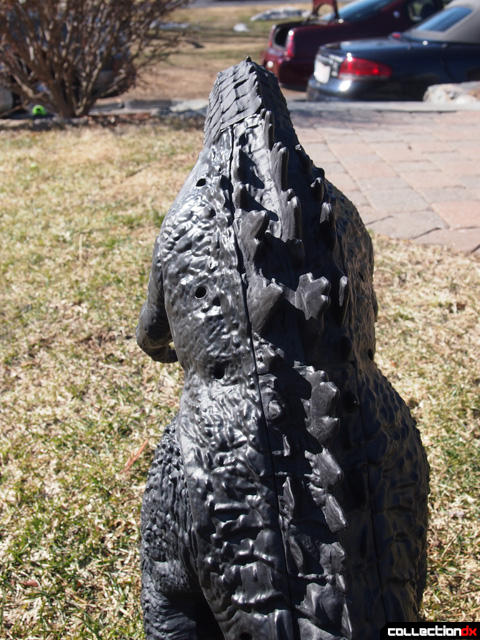 The toy features tail slash action, which is really just a joint in the tail. It's an effective gimmick as the length of the tail gives it inertia. 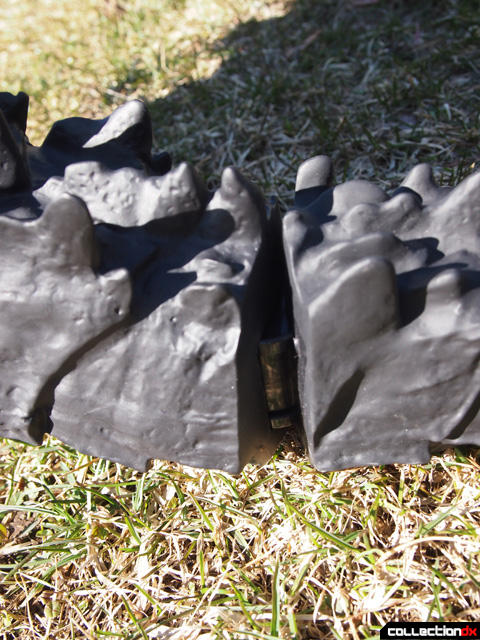 In a word, this toy is awesome. Run out and get one before they are gone. 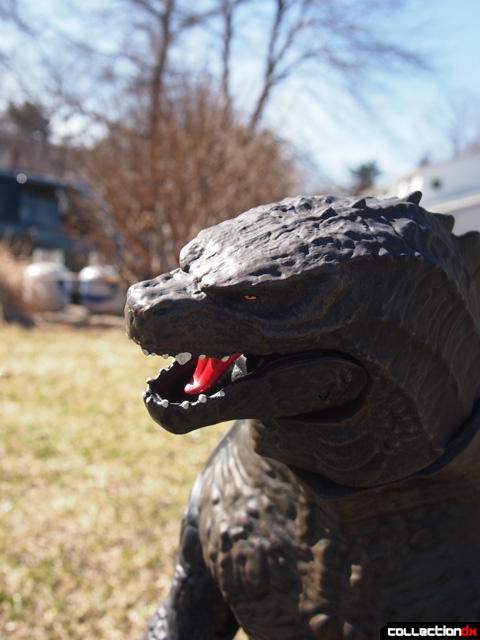 11 comments posted
This is a must have!

This looks so cool. I'm going to try and get one no matter what!

I thought he was younger, though not by much, since he has kids

"The head swivels and the jaw opens, revealing a nice, bright red tongue. I'm sure i's not accurate to the film, but it FEELS right. You know what I'm saying?"

Yeah, this toy is HUGE and very impressive. In addition to the spikes, the head, hands and tail are also rubber. But don't let that dissuade you. This toy, true to the character it represents, may still leave a path of destruction in it's wake! As I was returning home from the SRGM show, I had the tail resting on top of my box o'stuff I brought and when I got home, my hand slipped, the tail slid and punched a big old hole right through my Shogun Warriors Zargon box!

The electronics may be restored in a retailer-exclusive "deluxe" edition. They did this before with their recent large scale Darth Vader by making him a retailer exclusive and giving him lights, sounds, and an alternate light-up light saber holding hand. I would imagine they'd do the same with Godzilla by giving him sounds and maybe light-up spines.

Here is the deluxe Darth Vader:

Great review! My local TRU is starting to look more like a real TRU (words from the store manager's mouth, I kid you not) and they have this guy in stock. I'm impressed by the scale, and seeing it out of the box really makes me regret not having enough space on the shelf for him. They had the Bandai 'Meh' figures too, but I'm waiting for NECA's 24" figure.

I was more tempted to get this guy for my nephew. Maybe if I show his mother the review, maybe she'll let me. He'll be 2 this year and he needs a new playmate at his height.

Guy 40's nothing my brother and his wife had their first son at 50.

I didn't realize how big this was until I saw it on the skateboard and next to your dog! I might get this and display it destroying a LEGO city or fighting a Megazord. :)

Nice review and nice toy. But if I'm to be honest with myself, it's the kind of toy I'll buy, get bored of 6 months down the track - and not be able to sell on ebay for a decent amount because it's so huge.

Plus, the design of this new Godzilla makes me think douche-bag, he looks like a big fat head alpha male jerk.