Okay, whipped up into a righteous Godzilla frenzy? Perfect!

Folks, it's my pleasure to bring you some exciting news for all the Godzilla fans out there! Yes, there's new product out there to sate your kaiju lust...and it's not the same old thing. But before I get too ahead of myself, I want to talk about Far East Monsters, Ltd. This hot new kaiju collectibles company is based in Cleveland, OH. That's right: in the US...not Japan. How big is this news?

Well, let's see. Bandai America seems to be releasing new Godzilla figures right now. That's cool...but they're not even mentioned on their website. Who knows how long BA will support these toys. And as for the toys, themselves, does the market really need more small-scale $10 Godzilla figures? And what does the near future have in store for the fantastically bloated "vinyl scene"? Will Marusan, M1, and Marmit continue to release quality vintage-style kaiju toys when the bottom falls out of the designer toy market?

I certainly hope so. But with no new Godzilla films planned for production, these may prove trying times for the Godzilla nut! But that's where Bill Kerner and Tom Tvrdik of Far East Monsters step in! With seemingly no regard to the state of the "market", these intrepid designers are presenting us with their vision of what fun, high-quality kaiju collectibles are possible! 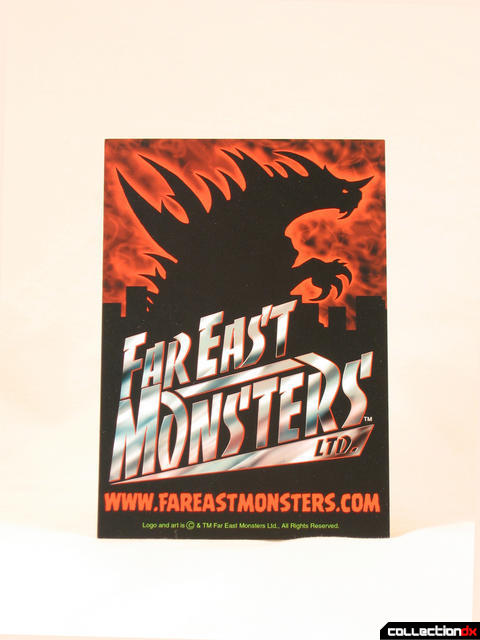 I first learned of these guys spending valuable hours at work searching for Godzilla stuff on eBay(!). I ran across their Mecha King Ghidorah floor puzzle. Click that link...I'll wait. Yes, it's a ginormous Mecha King Ghidorah puzzle...complete with the future jerks' flying saucer/time machine. Are you kidding me!? Who has the hutzpah make a product like this??? Like I said, these guys are bold!

I went on to learn more about this company...and fate (and Josh) put me in touch with the man, himself: Bill Kerner. Bill and Tom met at a company they worked for designing Godzilla-related merchandise. When the company decided they didn't want to pursue the license anymore, they got the idea to start their own company and pool their passion for radioactive lizards (not to mention their 20+ combined years of product development, design, and production experience!). They put together their pitch to Toho...and the license was granted! 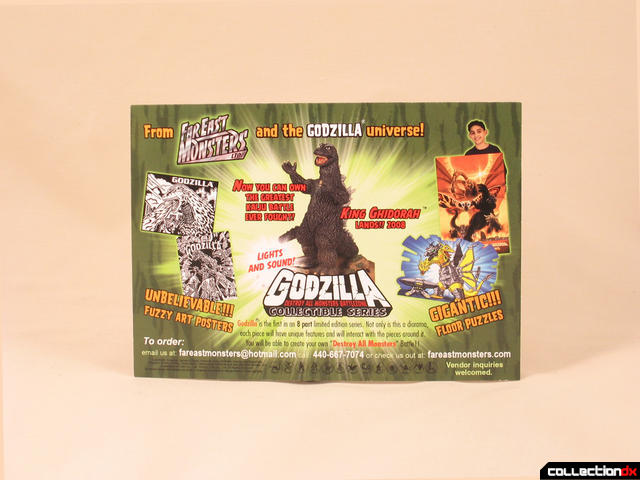 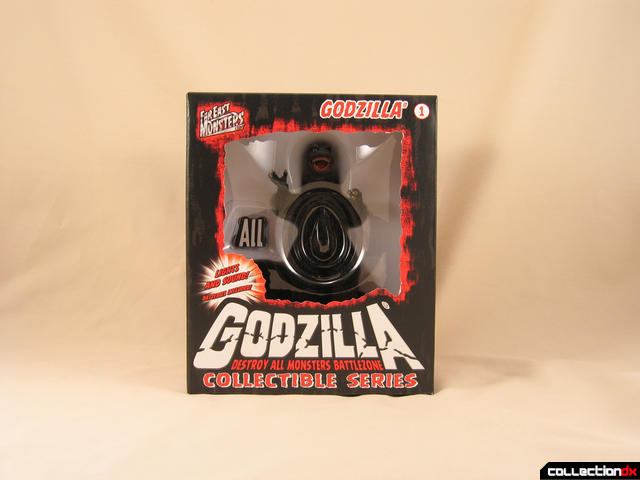 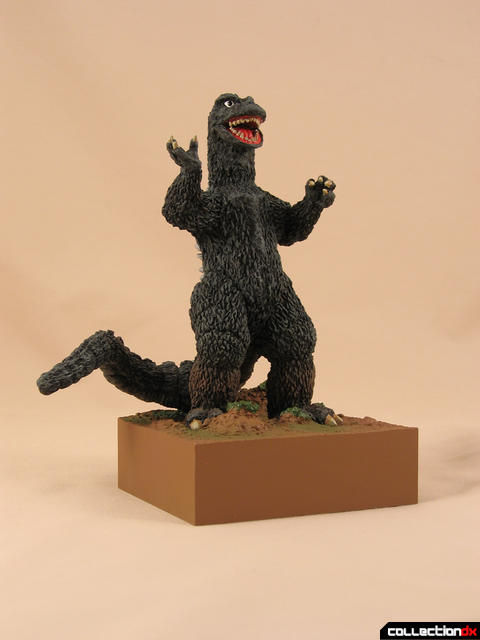 The figure of Godzilla stands just about 5-1/2" from the "ground"...plus another almost 2" with the base. There's no articulation in this piece, but what you get is a stunning paint job with brilliantly rendered weathering. The dry-brushing used in the paint application adds the perfect contrast to pull out Tom's sculpt. Just check out the texture on the skin: 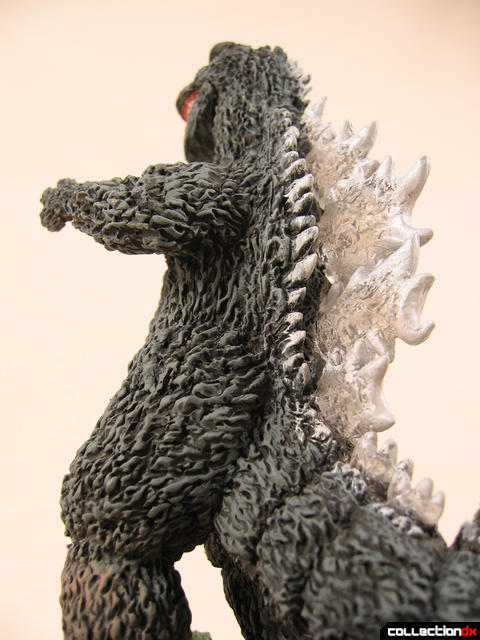 The detail paint apps on the head are pretty much flawless as well. Nothing to complain about here. Even the base is nicely done in a very natural looking scene--great for stomping 3-headed dragons! When taken as a whole, the look of the piece is beautifully faithful to the film that inspired its creation. 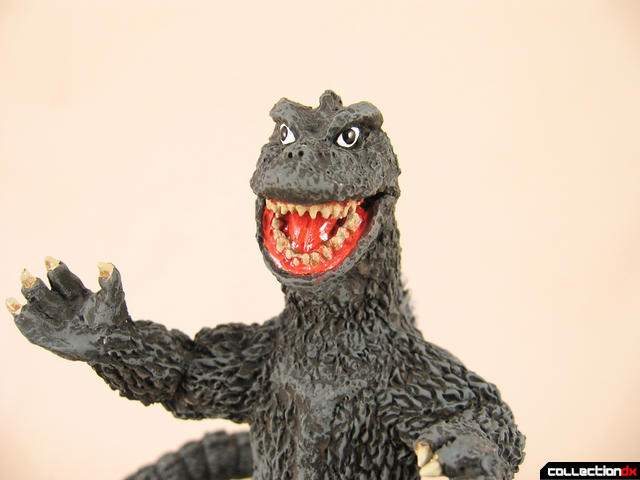 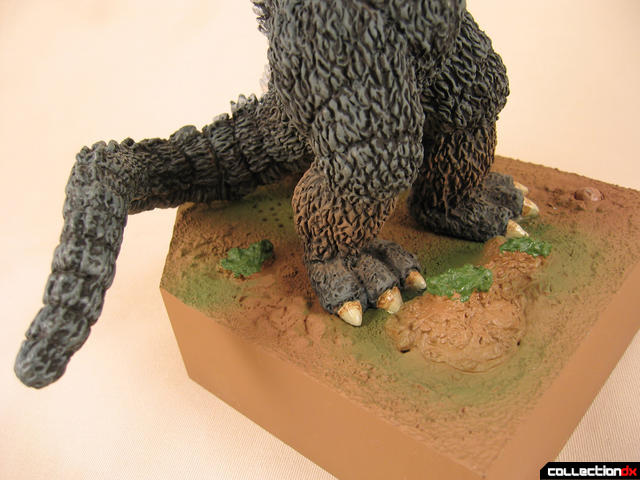 Okay, so I've talked about the quality of this Godzilla statue a bit. Words, of course, don't do it nearly as much justice as pictures. But there's much more to this item than a pretty paint job. First of all, Bill and Tom have set out to make unique collectibles--stuff we haven't seen before. This statue doesn't just look gorgeous...it comes to life! At the touch of a discreet button, a crystal-clear roar-n-stomp sound clip lifted directly from the movie cranks out of the base. And if that wasn't enough, a blue glow emits from inside his mouth and from the fins on his back! (the three required LR44 batteries are included, ya hobos!) 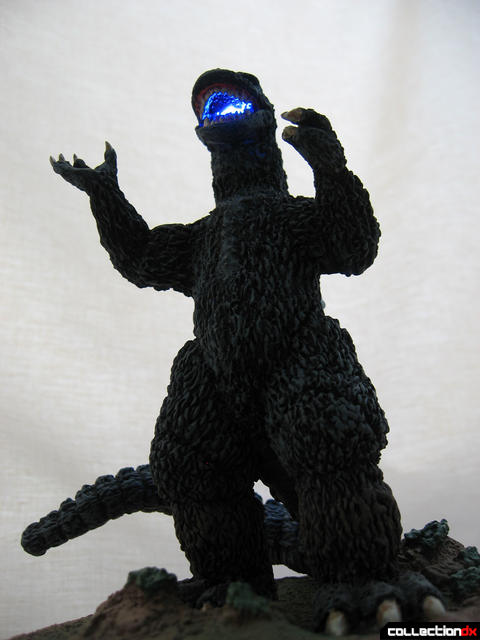 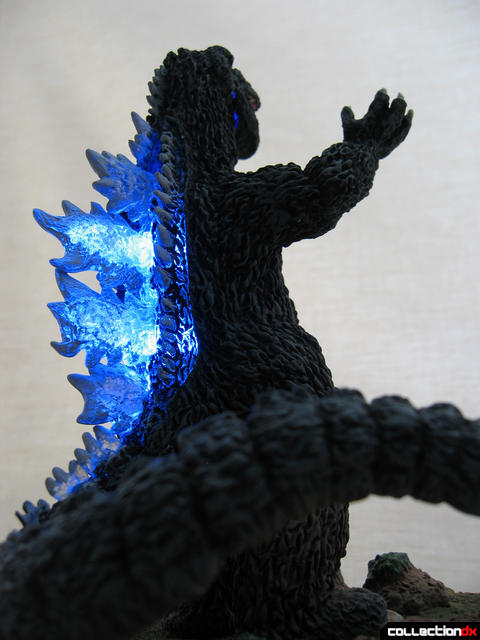 Again, a picture's worth a thousand words...but I'm thinking a little video couldn't hurt either! ;)

And if that wasn't enough, check out Far East's own YouTube promo vid of this item!

Lastly, as I mentioned before, this piece is part of a "Series". That's right: there will be more. A total of eight of these statues will be produced, comprising all eleven kaiju from the film. The bases of each statue will fit together to produce a complete diorama of the apocalyptic final battle in Destroy All Monsters! Yup, it's gonna be hot!

And the next monster in the series? None other than King Ghidorah! Watch for it in '08!

Finally, I would like to take a moment to mention something that goes beyond this passion for Japanese robots and monsters we all share. Bill and Tom obviously started Far East Monsters because of their love for this hobby...but they are also working to provide for Tom's son, Tommy, who is autistic. Among their goals is to raise awareness about this disorder that affects so many children. Please check out Tommy's Page for more information. Thanks!

I really didn't pay much attention to this last time I was over, and it looks like I should have. Might have to grab these.

Funny that they mislabeled Gorosaurus as "Baragon" in that trailer though!

IIRC,Baragon was actually supposed to be in that scene. The Baragon suit was being used as an Ultraman kaiju at the time (Baragon was modified into several different Ultraman foes) so Tsubuyara used Gorosaurus instead. That's why Gorosaurus suddenly has the ability to burrow underground,he's filling a role intended for Baragon. I'm pretty sure at least one of the dubbed versions calls him "Baragon" as well,but it's been awhile since I've seen Destroy All Monsters.

Thanks for clearing that up--I, too, always wondered how Gorosaurus suddenly was able to burrow...not to mention why Baragon was missing from the movie!

Ok, you are making us all look bad with your video. Awesome job.

It was kinda loud, but I was overall pleased with how the music came out in the video! ;)

Nekrodave, I'm so glad I wasn't the only one to catch that weird error in the US trailer.

I got this thing for Xmas and have really been marveling at how fantastic it is. I can't think of a single way I would improve it. It's just perfect. Go buy one. I can't wait for the rest in the series!

All I can do is pray someone picks up the remainder of the line, or FEM gets back together if the economy were to ever improve. After seeing the prototype of Rodan and Mothra, it is that much harder to accept the lines demise. It hurts to KNOW what King Ghidorah should be aiming at with that electrical bolt!!!