The Shogun Warriors are back. 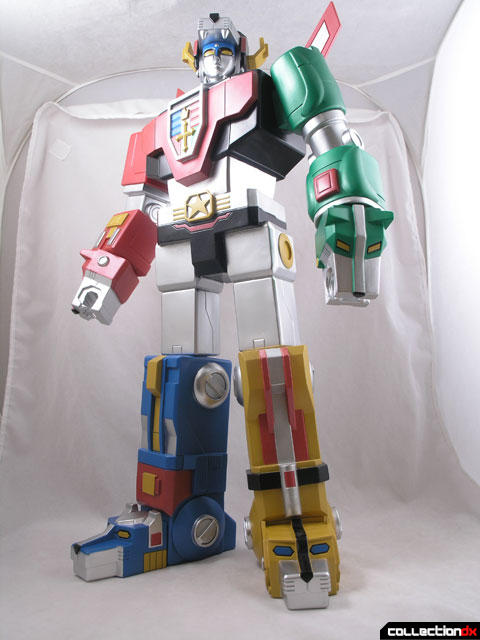 The original Shogun Warriors line was a mish-mash of whatever robot toys Popy had available at the time and were then lumped together under a toy line in the 70s. There was no cohesive story until Marvel Comics put together their Shogun Warriors comic, but by that time Go Nagai and Dynamic would not let his characters be used in the comic, so the comic barely resembled the toys that had preceded it. After the comic ended, the Shogun Warriors name had languished in obscurity until briefly used by Trendmasters for an action figure line.

Eventually, toy collector and robot fan George Sohn (who just happened to own Toynami) got the rights to the name Shogun Warriors and wanted to put out toys that paid tribute to the influential of our youth. Toynami had previously held the rights to make Voltron toys but since Mattel now has the rights to Voltron, this has to be marketed under its original name. To continue making toys in the likeness of the Vehicle and Lion Voltrons, they were now placed under the revived Shogun Warriors brand name and given their original names – Go Lion and Dairugger XV. 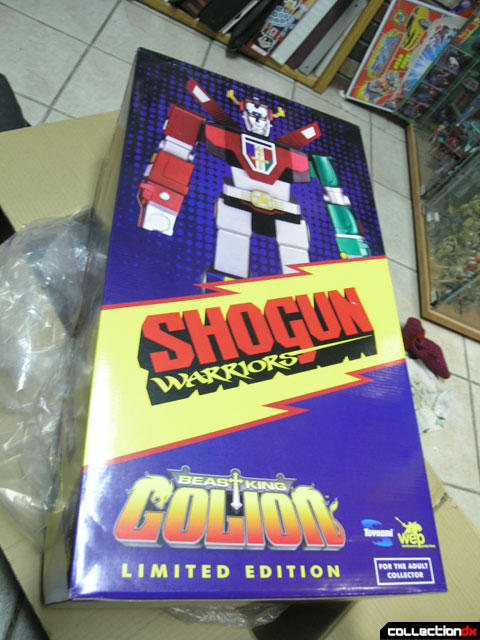 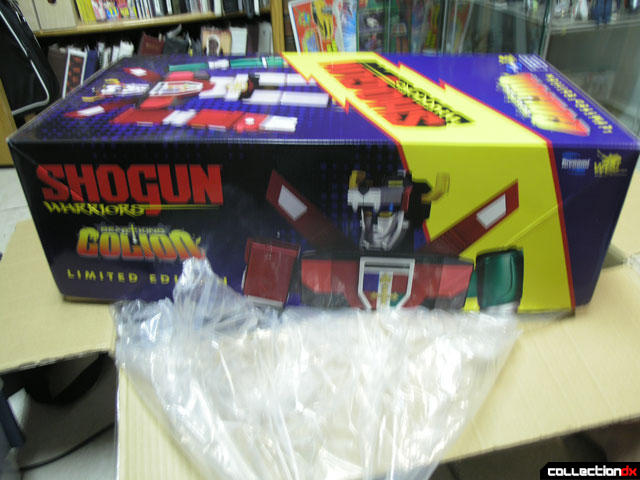 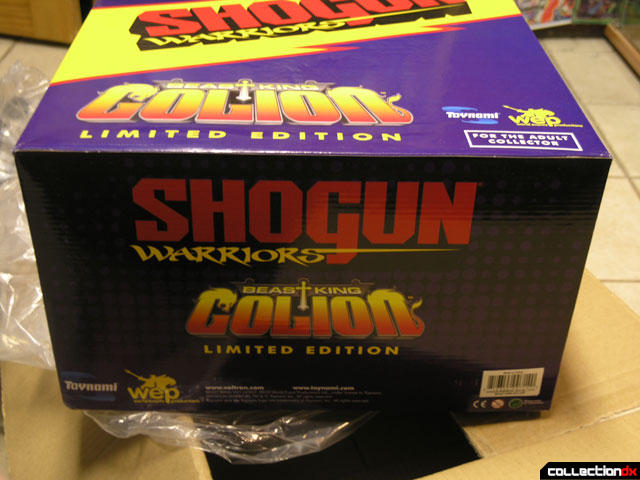 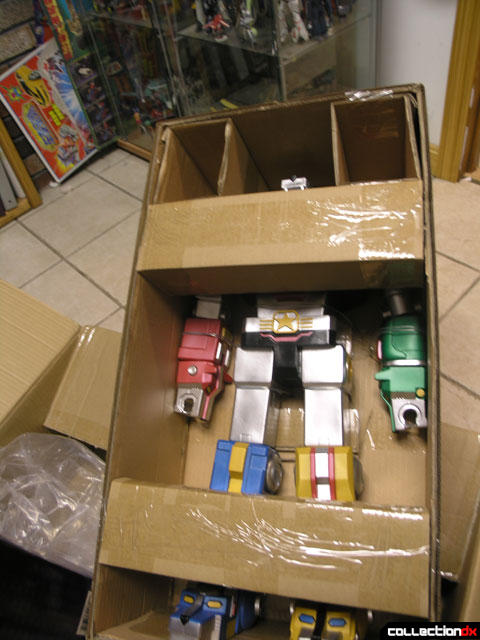 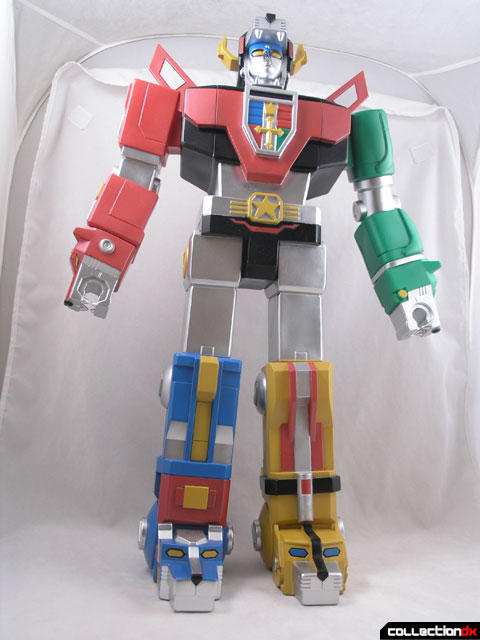 The toy is mostly made out of hard, thick vinyl. The fists do not fire. There are no “roller skate” wheels. But it is 24” inches tall, comes in a Shogun Warrior box, and is marketed as a Jumbo. If you collect Jumbo Machinders, you've bought things that resemble jumbos less than this. 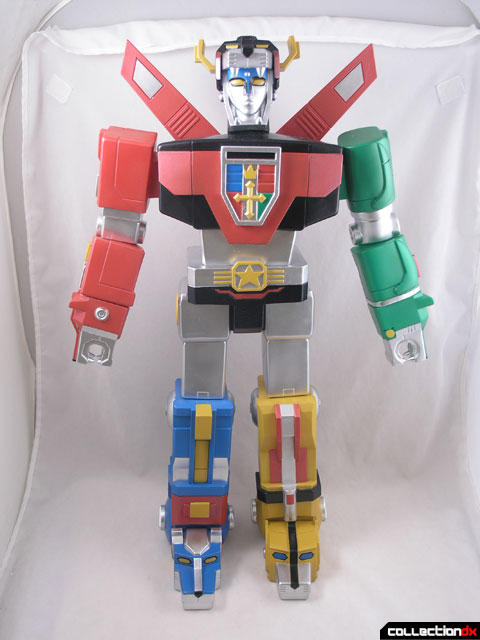 The head is nicely done, and it's rare that you get to see the detail of Go Lion's head this close. The “ears” are solid hard vinyl and appear to be molded with the head (as opposed to being glued on). The head can rotate although it's really tight. 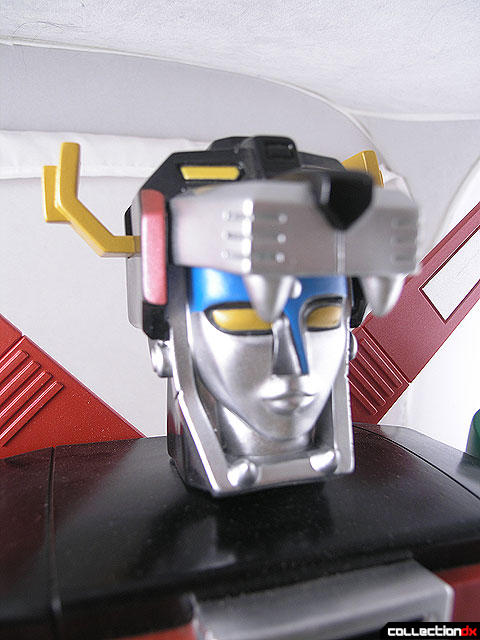 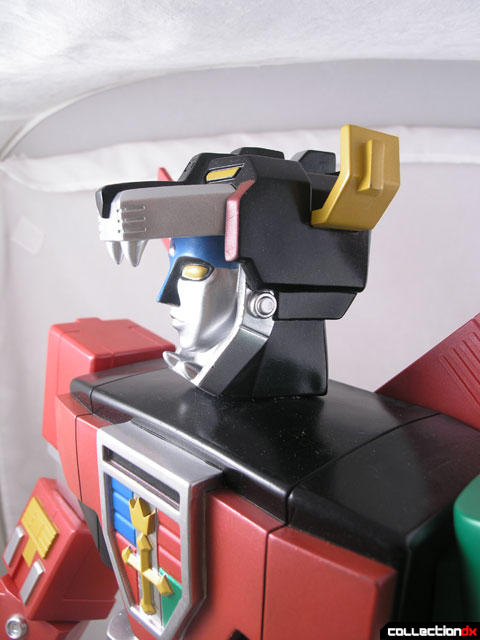 The shoulders rotate and there's also a swivel joint at the elbows. They are angled in such a way that you can get more dynamic poses depending on how you position them. The fists can also rotate, and as opposed to the illustration on the box, the centers are cut out. Unfortunately there is no sword included for it to grasp. 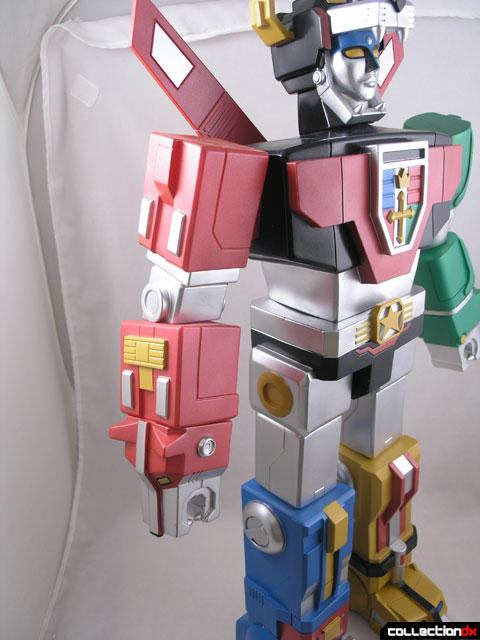 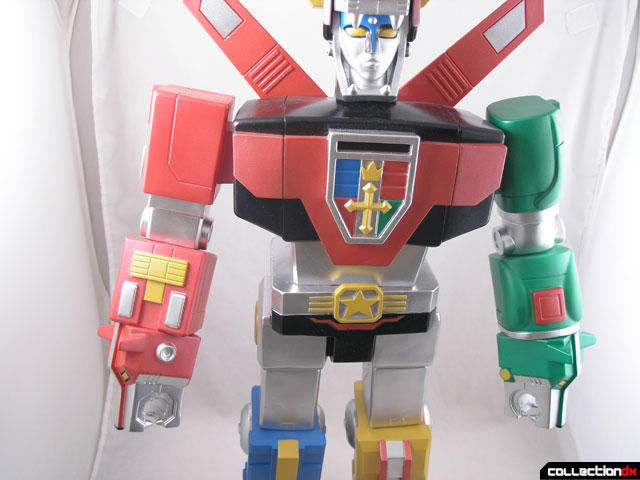 There is a waist joint, but the movement is limited by the badge on the waist. 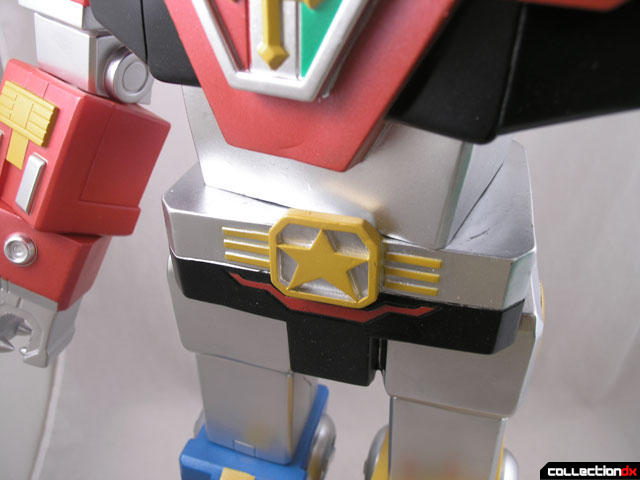 The legs are locked firm at the hips, but you have swivel joints at the knees. The lion heads on the feet can also rotate a little bit. 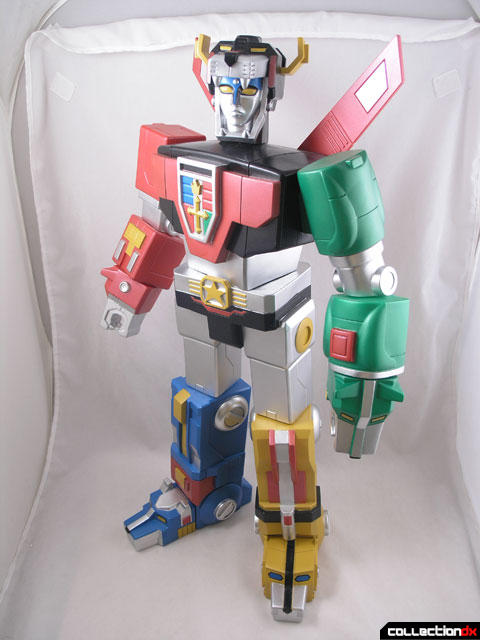 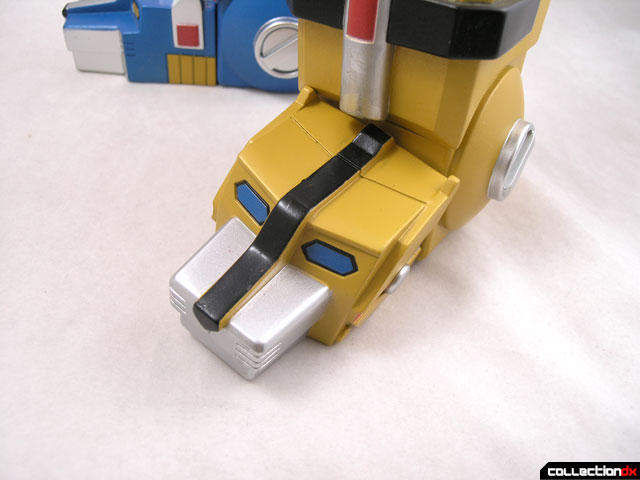 On the back of the figure you have the wings which are molded in solid rigid plastic. 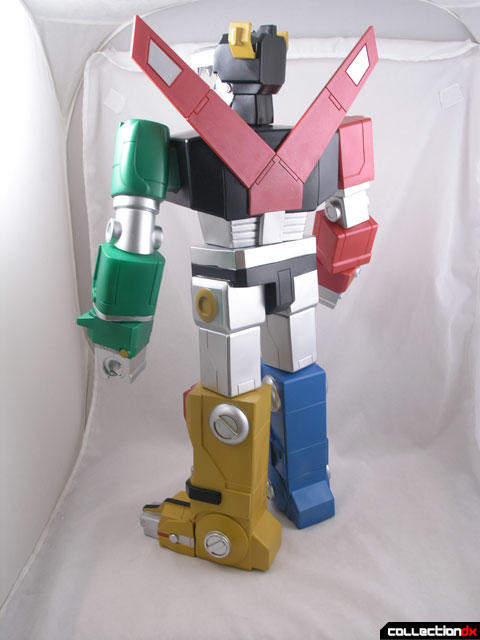 The toy is not without its flaws, but I can forgive them considering the nature of the toy. One issue is a slight bulge where the head meets the body. This is easily fixed by heating up the vinyl with a hair dryer. This may be due to the internal support structure pressing against the top of the chest. 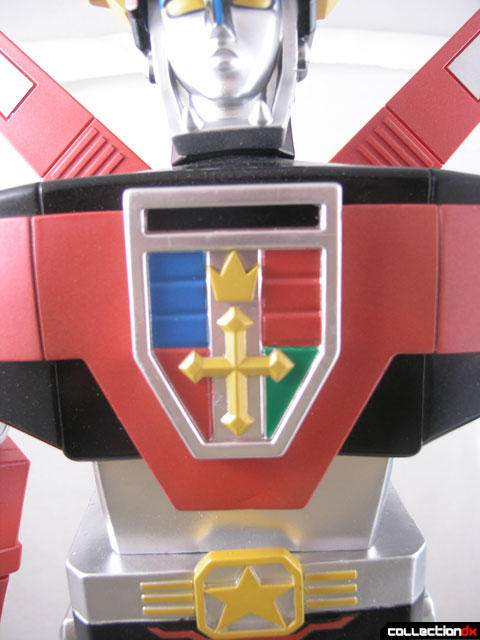 The paint is good, but not great as you can see places where it was touched up at the factory. The toy has a few imperfections in the molds and paint detail but I can overlook it considering the scale and scope of the toy. In fact the only thing I can really complain about with this is the lack of a sword.

This thing is very cool. I'm more of a Dairugger fan than a Go Lion fan, but a cool toy is a cool toy. 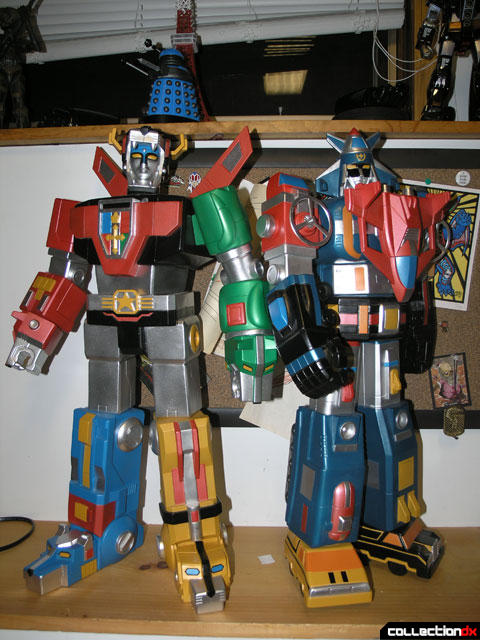 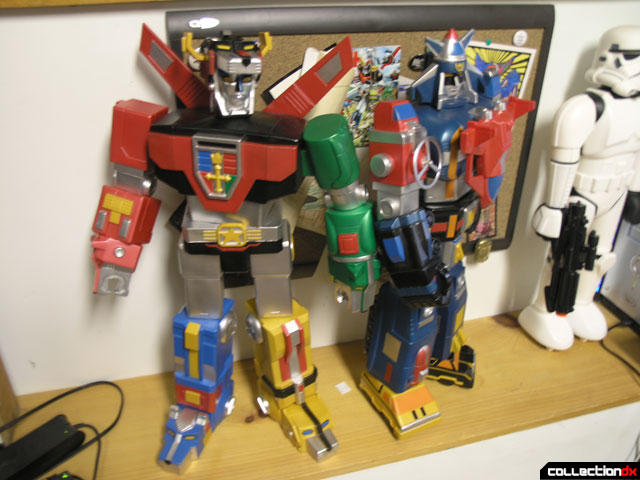 4 comments posted
I bet the sword from the 18

I bet the sword from the 18 inch Voltron that Trendmasters would fit in that Jumbo's hands.

That first full-length shot is sooooo money. That's the one that makes this very tempting....

I went to collect mine yesterday from the Post Office and I am really happy with it. It is taller than the 60cm MAZINGER Z and GRENDIZER by HIGH DREAM!!!!