Threezero continues to impress with their upcoming release of Getter Robo. This is a pre-production sample provided by Threezero, and the final version will ship first quarter 2016. It's available for preorder now through Threezerostore.com.

As this is a pre-production sample, there's no packaging to review. All that we got was the finished figure with weapons and a photocopy showing where the instructions go.

Getter Robo stands majestically around 16" tall and is constructed of sturdy ABS and PVC plastic. He's less stylized than the previous Mazinger Z figure so his proportions are more in line for what we expect from Getter. 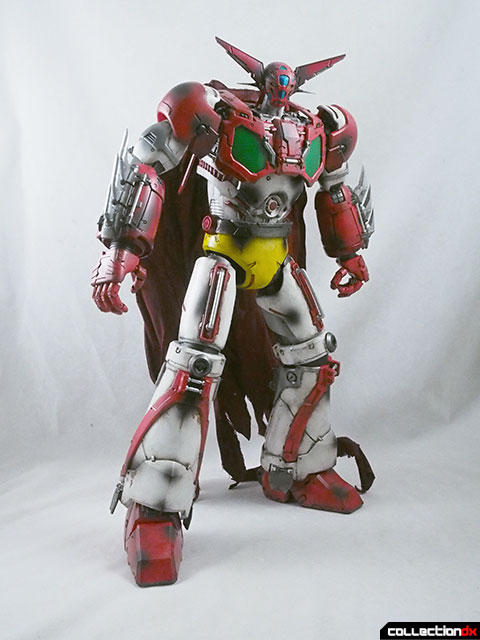 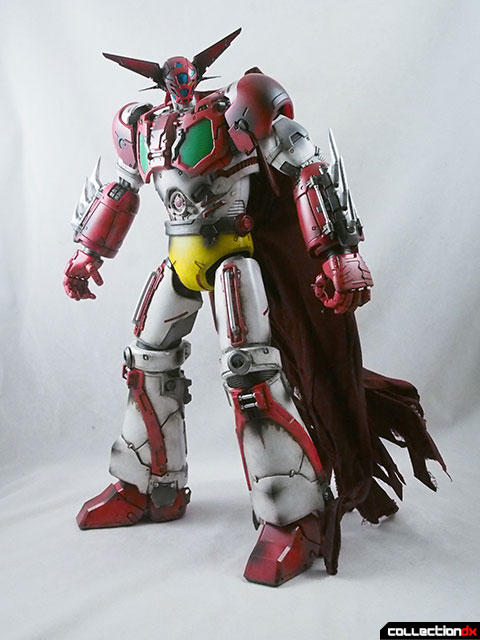 Getter's cape is a striking red that's been treated with something to make it a bit more rigid. Metal wires line the cape enabling you to somewhat bend the cape into poses. Like the rest of the figure, the cape is weathered with various tears and holes. 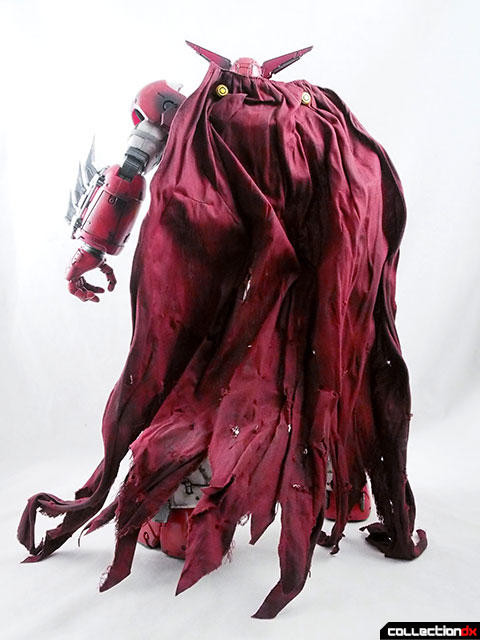 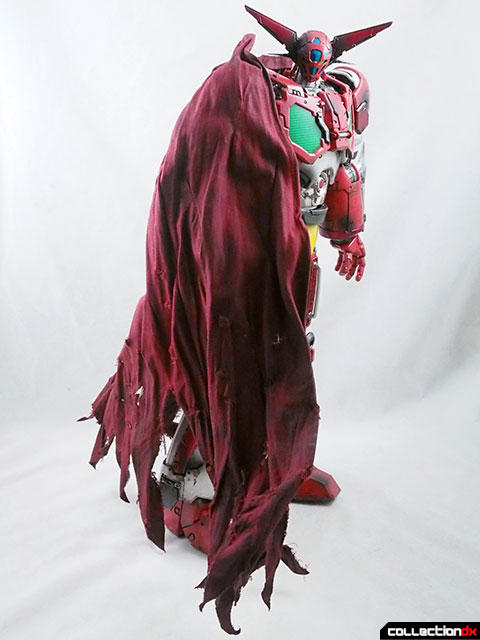 The head has amazingly sharp detail with subtle weathering. The head is on a ball joint which leads down to a swivel joint for the neck. 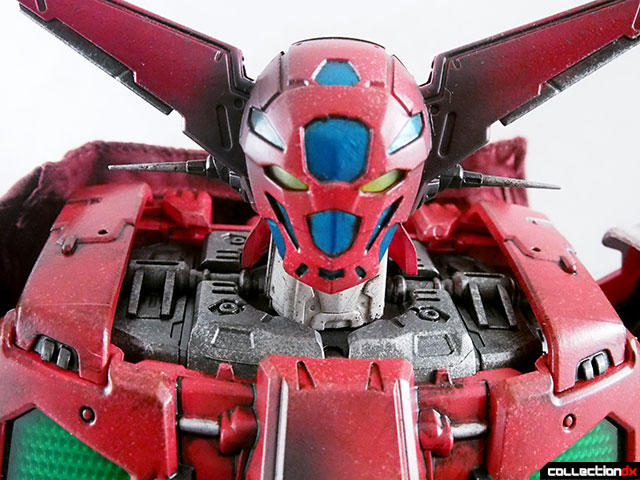 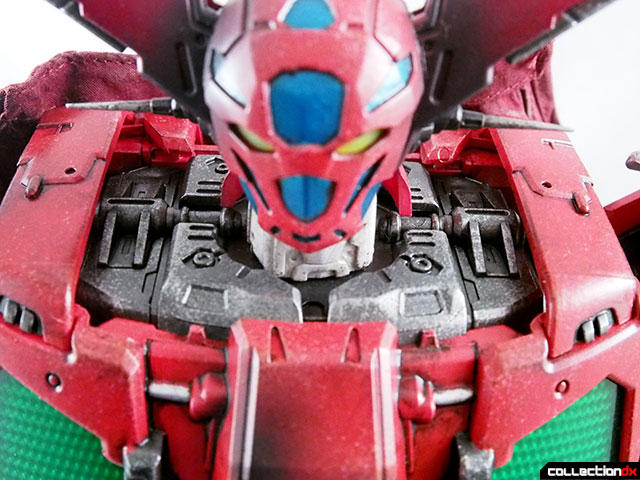 The head can light up via a microscopic switch on the back. Three AG1 batteries are required (but not included). These batteries are rather hard to find in the US, so you may want to preorder some from Amazon. As I had none, you will have to use your imagination.

The chest is a highly detailed shell of plastic from which everything else articulates from. 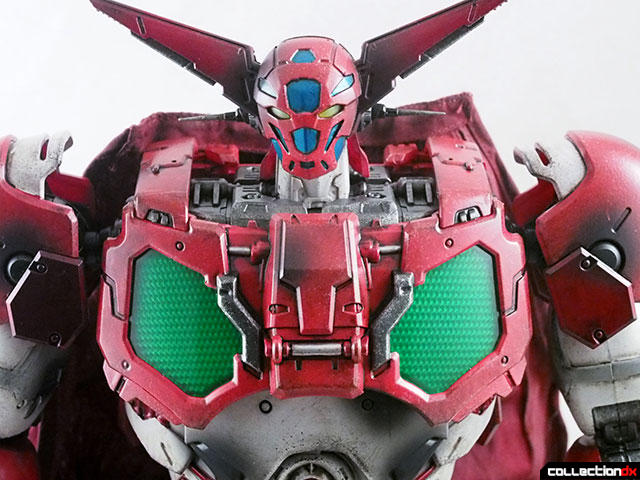 Under the chest there are several moveable flaps that allow for a wide range of motion. 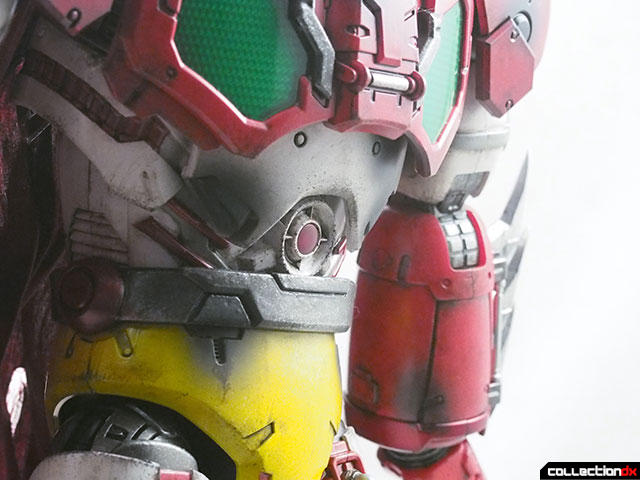 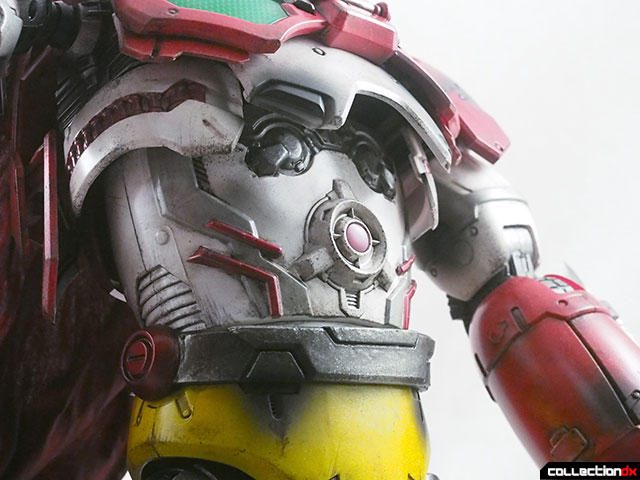 The stomach has a light-up feature that is activated by a switch on the back. Again, you need three additional AG1 batteries. Again, I don't have them.

The shoulders are wonderfully clicky pieces of machinery. The move any which way, and the shoulder armor is also moveable. 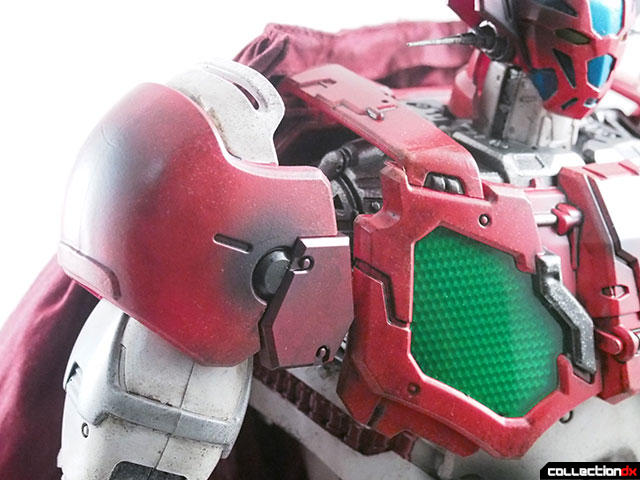 Where the shoulder ball meets the bicep, there is a clicky detented joint. Below that is a double jointed elbow which also clicks into place. 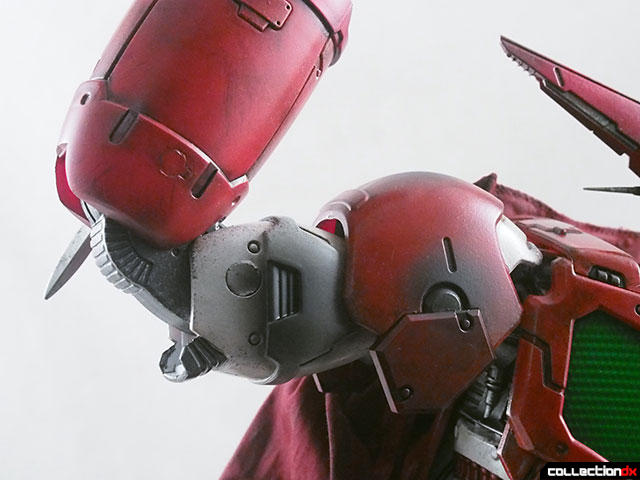 Each forearm has a series of sharp blades on one side. There will also be a limited release black version that will have interchangeable spikes with longer ones. 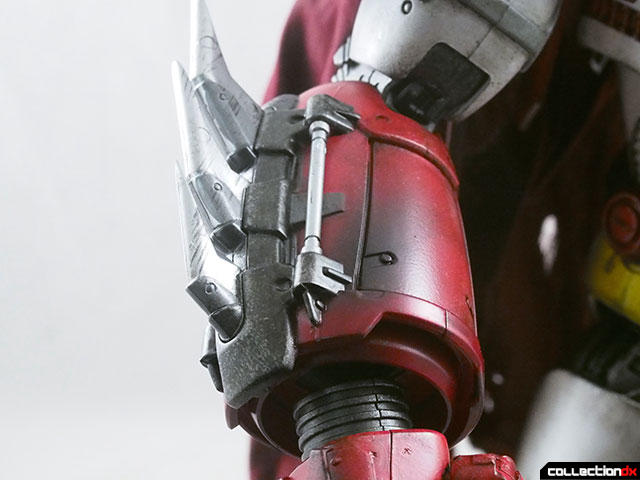 Each hand connects to a ball joint and features fully articulated fingers. 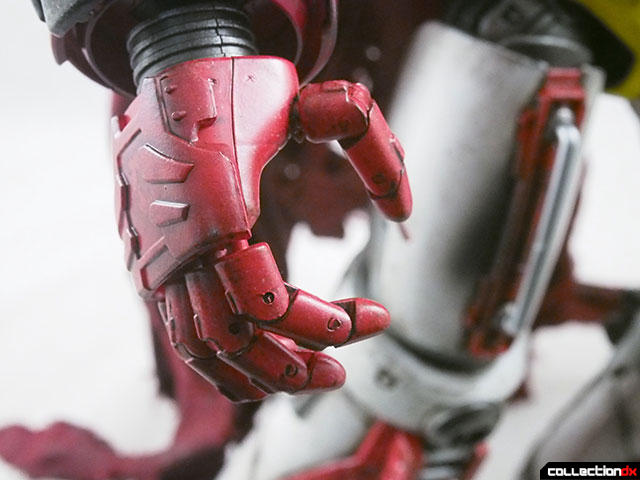 Going down to the legs, each hip features a clicky ball joint with an upper thigh swivel. 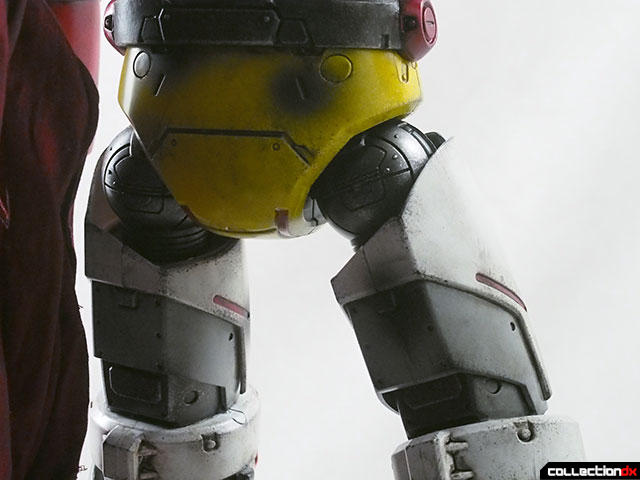 Each knee is double jointed with the mechanism hidden behind a nice mechanical sheath. 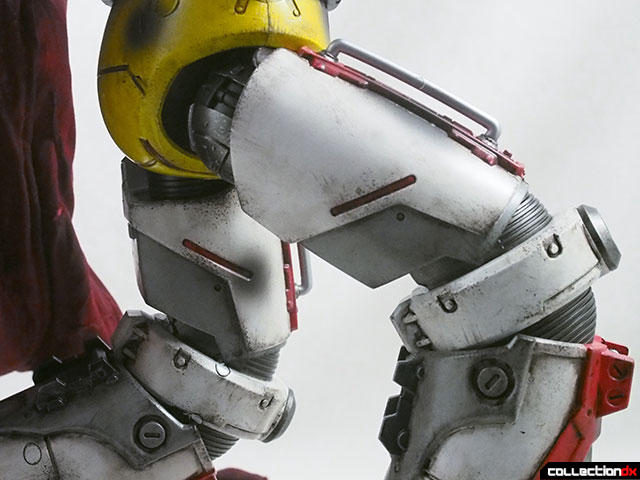 The feet are on ball joints, with an articulated toe. On the side of each ankle are little moveable flaps. 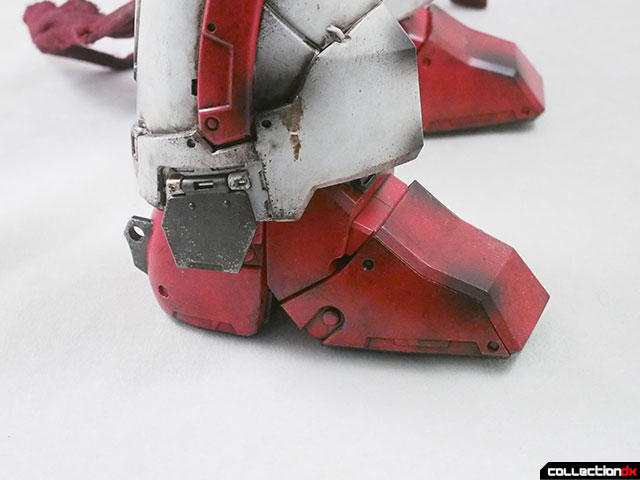 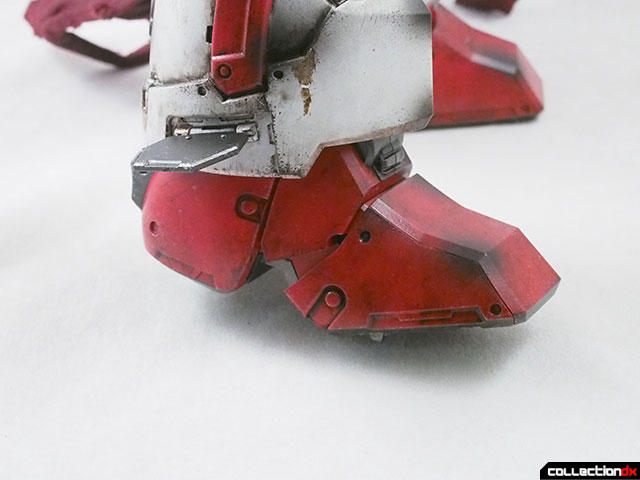 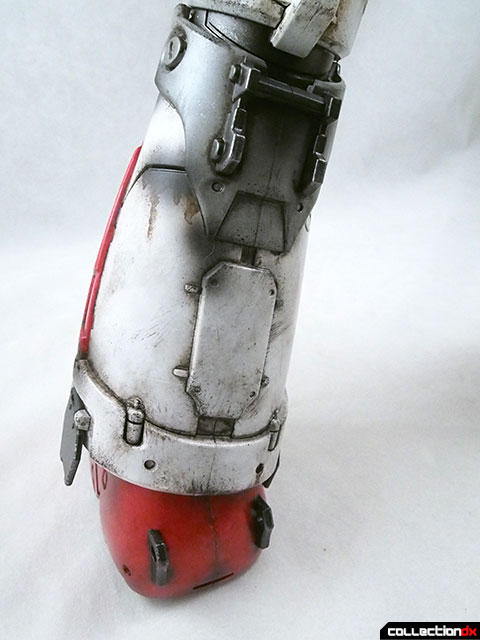 Included with Getter Robo is a set of Getter Tomahawks. These large tomahawks are very nicely detailed with sharp points and solid construction. They're quite heavy. 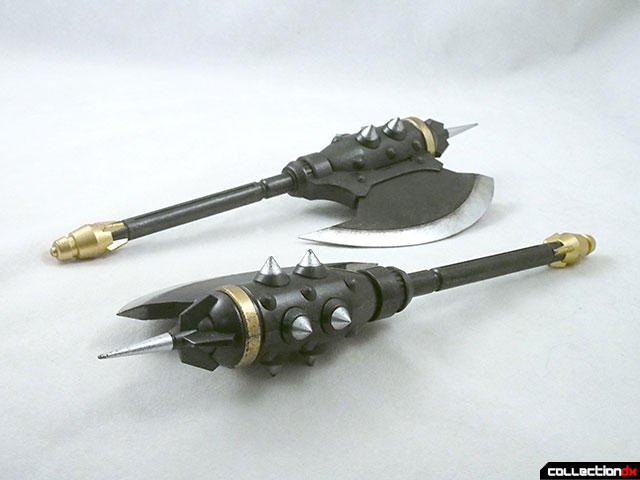 And therein lies the problem. There's no sort of tab or locking mechanism to keep the tomahawk attached to the hand. Due to the weight the tomahawk will sag or slip out of the hand easily. 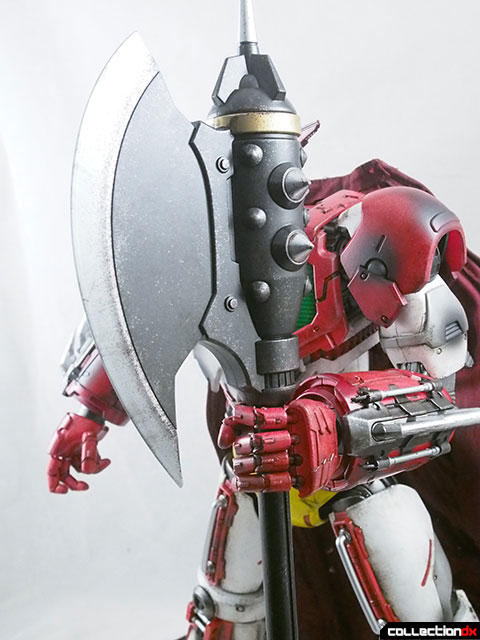 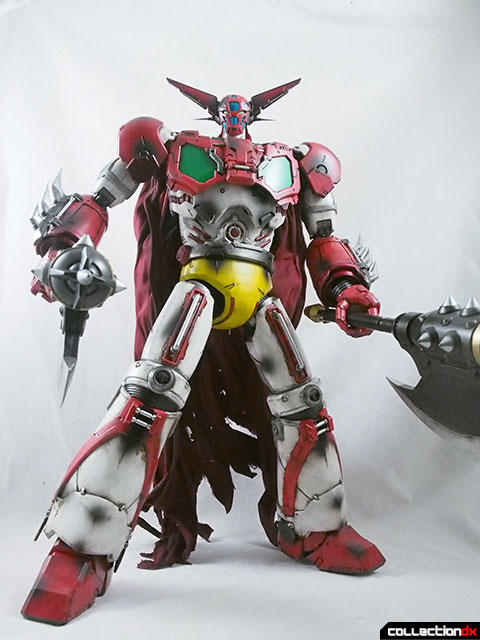 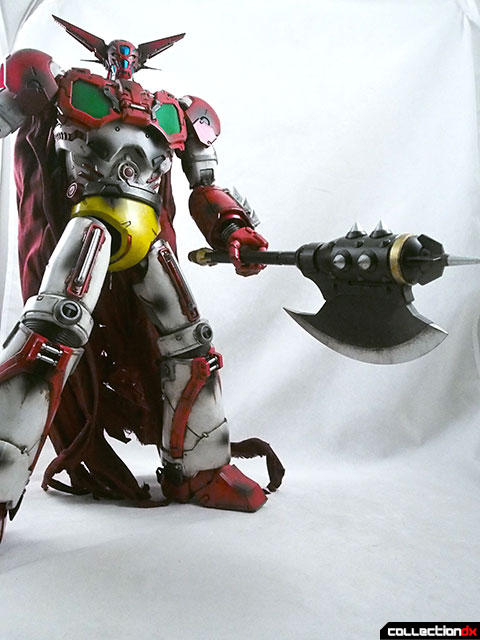 The cape is removable by pulling out the two gold tabs from the back. Without the cape, you can get a good look at the detail on the back of the figure. 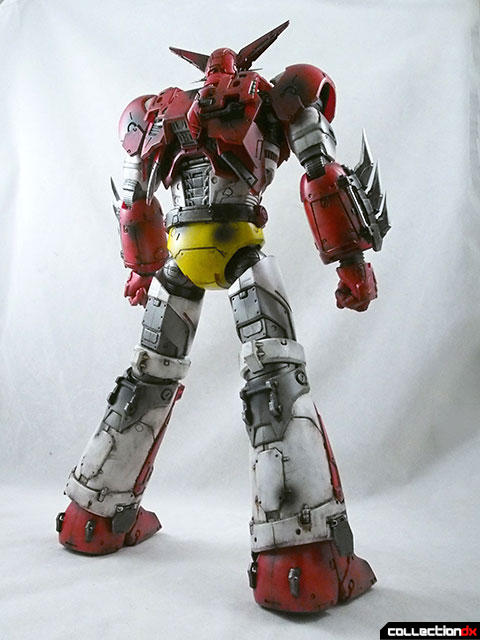 Both panels for the batteries are accessible on the back of the figure. 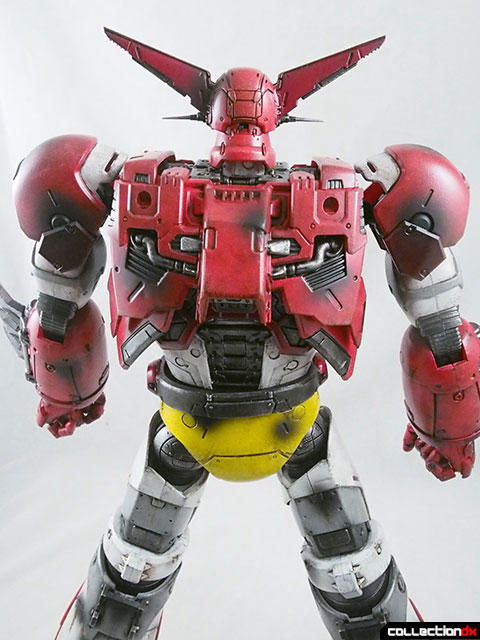 Overall, The Threezero Getter is a great figure, with no major issues. I would have liked for there to be a better method to hold onto the tomahawk, and It would have been better if they choose more accessible batteries for the electronics, but aside from that it's a great figure.

The final version of Getter Robo will ship first quarter 2016. It's available for preorder now through Threezerostore.com. Thanks again to Threezero for sending along this sample.

So would you say that, artistically, this is the best Getter One we've seen so far? Compared to the EX-Gokin and Sentinel/T-Rex, that is.

It really does look like if Getter Robo were in a live action movie!

As much as I adore my threezero Mazinger Z, Getter here just isn't interesting or different enough to justify another $330 - and the shelf space he'll consume. Although Mazinger Z does look ten times better in person, than in pictures, so who knows, might change my mind after seeing this in person.

I just received the Threezero Getter 1, and mine has hidden tabs/pegs in the Tomahawk handles for securing them to the hands. I don't see those in the Tomahawks you have. The fit so securely that it can hold the Tomahawks tightly in place with its hands open!

I think this is one of the reasons they send out pre-production pieces to reviewers. They are able to see the toys through a critical eye, and make changes before they go to production.