I have to say I am very happy with the Generations line. They've managed to update many characters while keeping them faithful to the G1 releases. Today I have Scourge who quickly became another favorite of mine. I really really like this figure.

Let's start off with his alternate mode which is how he comes right out of the package. Its what many people call a flying wing. It seems to be a cross between a Northrop N9MB/YB-35,49/B-2 Bomber etc. In other words it looks like an airplane wing without the whole middle part nonsense. Pretty cool choice of alternate mode. Very unique. 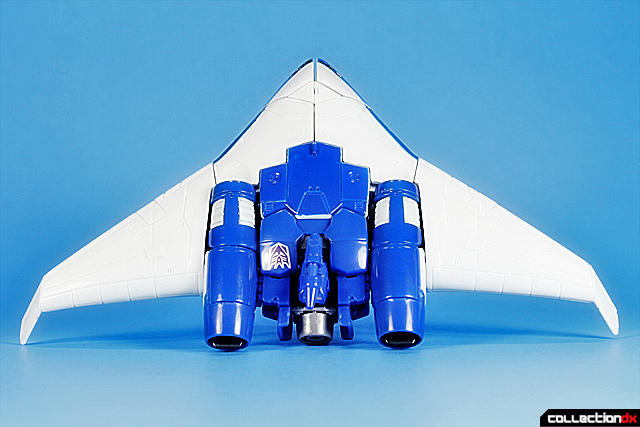 Taking a look at the bottom shows that all robot bits are well hidden which is not always the case with Transformers. They've even incorporated deploying landing gear. 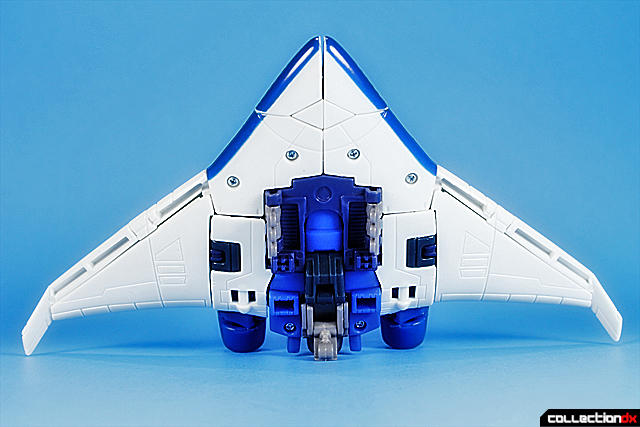 I have to say that the transformation is super cool. Especially they way they incorporate the arms into the jets. It's so well done and engineered, that I just can't stress how cool it really is. Aside from that, everything just makes sense and most transformed bits have some sort of tab to help everything line up and stay put. 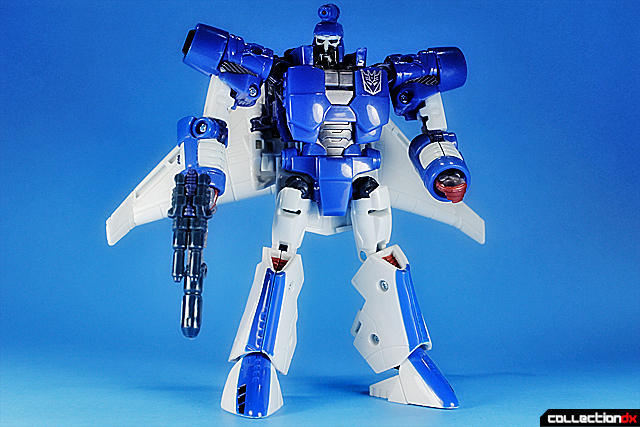 The back of the figure is rather clean and uncluttered. He does suffer, like most Transformers, from hollow leg syndrome. Unfortunately, they are no clever flaps to cover this up. Kibble has to be stored somewhere...no? Take a moment to absorb the high gloss of the wings. They almost look like painted diecast. 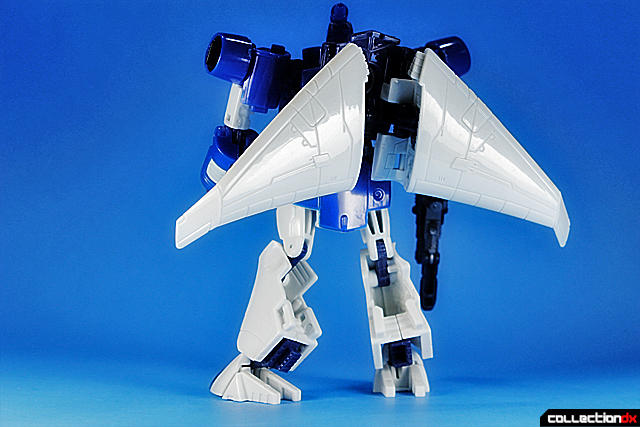 For weapons, he has two small guns. 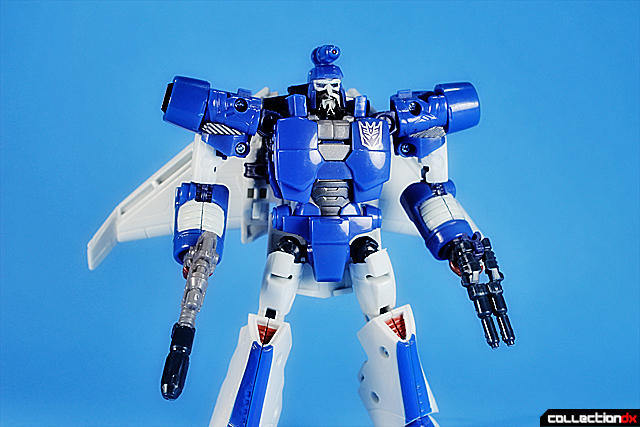 The two small guns can be stored inside of his wings when not in use so you don't go losing them during play. Each guns goes into a corresponding area of the wing and clip in safe and secure. 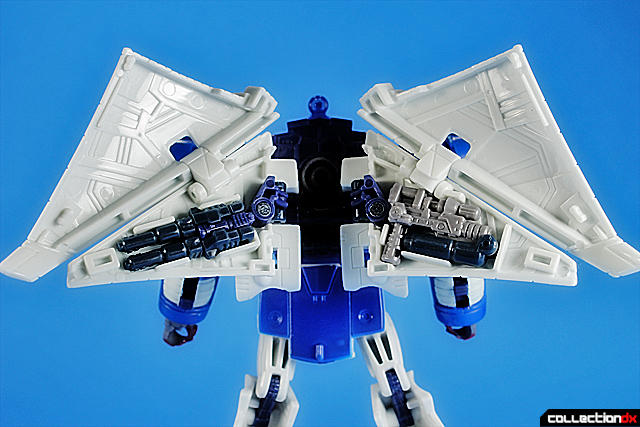 The two small guns can be combined together to form a single bigger gun. 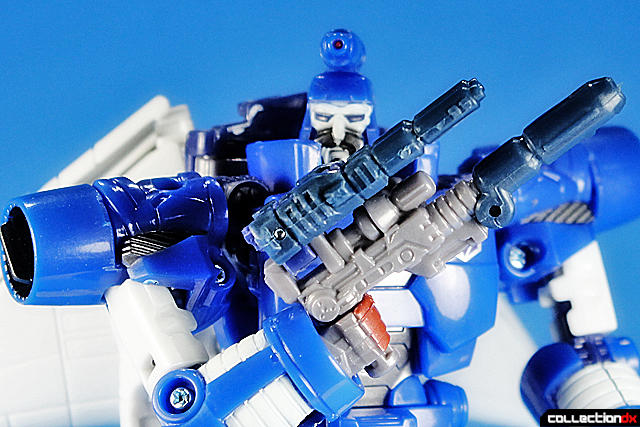 When we take a look up close, you can see that they've done a pretty good job at keeping him recognizable. I really really dig the Decepticon logo. Instead of stamping a cheap silver or black one color faction symbol, they not only made it a classic two color design, but it's a sticker! Very old-school. 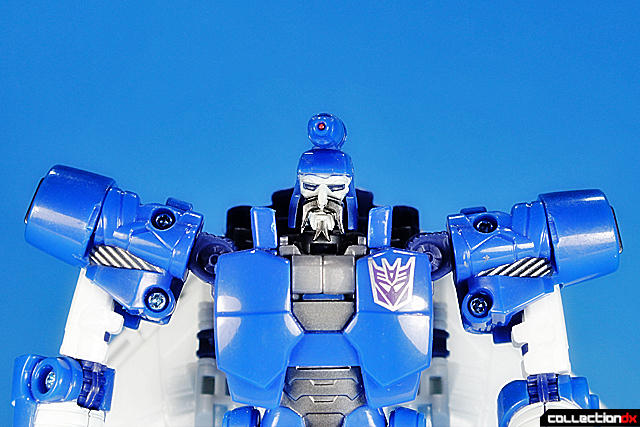 Although Scourge isn't necessarily loaded with paint apps, the paint apps he does have are very well thought out and does not make the figure look like it's lacking in that department. Attention to detail is nice. I really enjoy the level of detail given to the boosters that become his shoulders in robot mode. 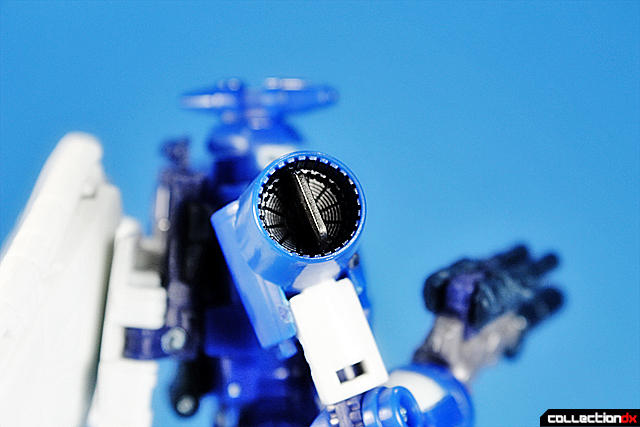 You'll be happy to know that he has a working waist joint. 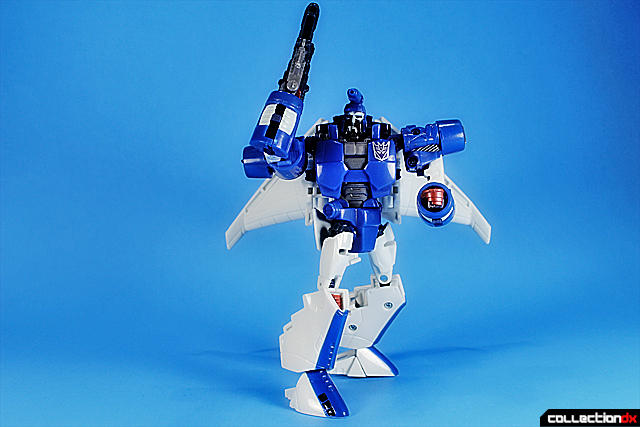 Overall, I'm impressed with the figure. I love the two tone paint scheme, make him look sleek and cool. I thought having white would detract from his evilness but it looks so darn cool. Like most newer Generations figures, he's a little tough to get but not impossible. 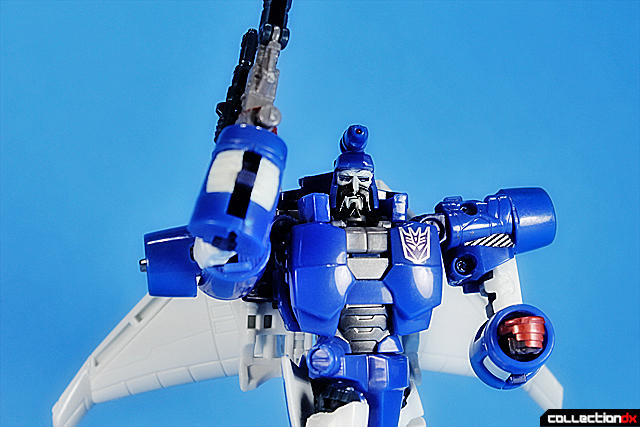 Totally unnecessary for a robot but cool nonetheless!

If anything it looks like the Boeing BWB concept study for an 800-passenger airliner.

Wow, that Boeing looks VERY much like Scourge.. it makes sense since the windows on the Scourge imply that its vehicle mode is very big unlike the smaller planes I listed in my review. Thanks, for pointing that out. Even the wing tips look alike. Good eye