Garrus Vakarian is just one of the many eclectic characters that joins Commander Shepard on his journey to save the galaxy. Garrus joins you early in the first game and is easily one of the most popular characters from the game, so having him in the first wave of characters in this new line makes a lot of sense. After all he’s your bro (and to some of you, your love interest).

The package is a four color window box with a lid on the front that opens like a book. Velcro holds it in place. 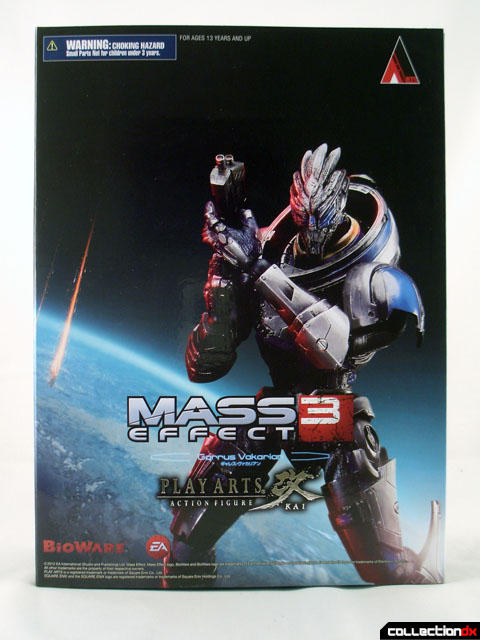 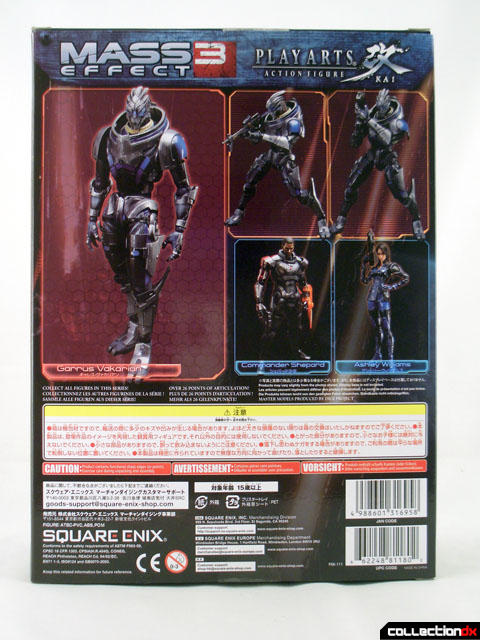 Inside is a brief character description as well as information about the included weapons. The figure is packed in a vacuum-formed tray. 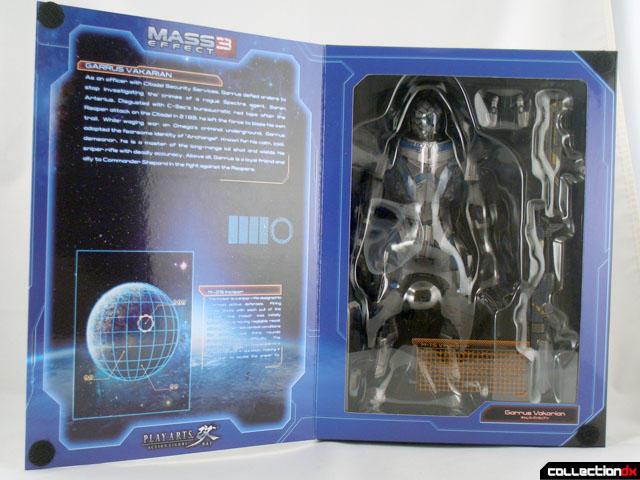 Garrus comes packed with two weapon-holding hands, an M-29 Incisor (Sniper rifle), and an M-1S Vindicator (assault rifle). The stand in the pictures is NOT included. 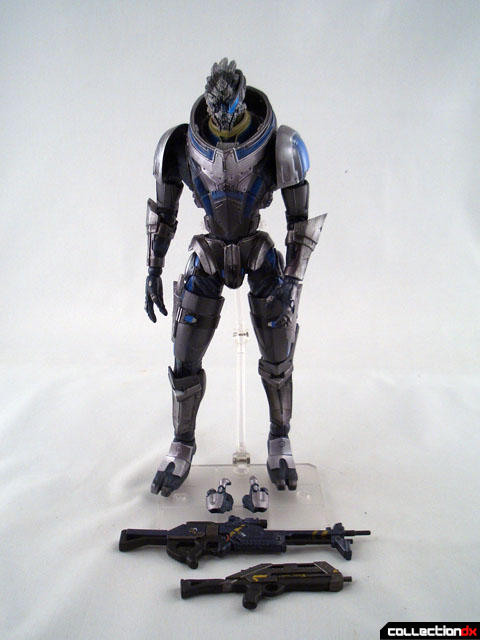 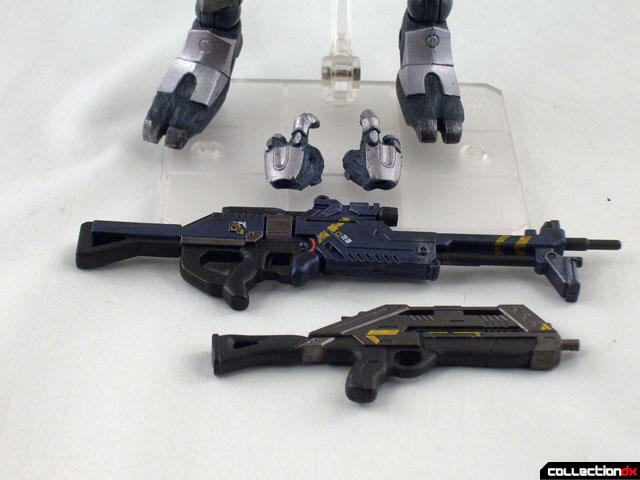 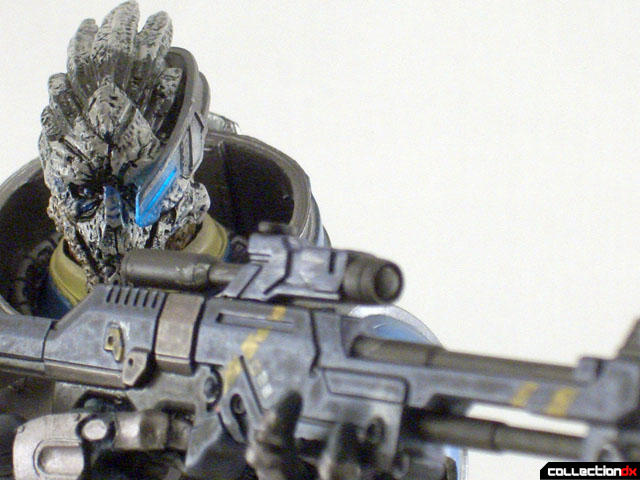 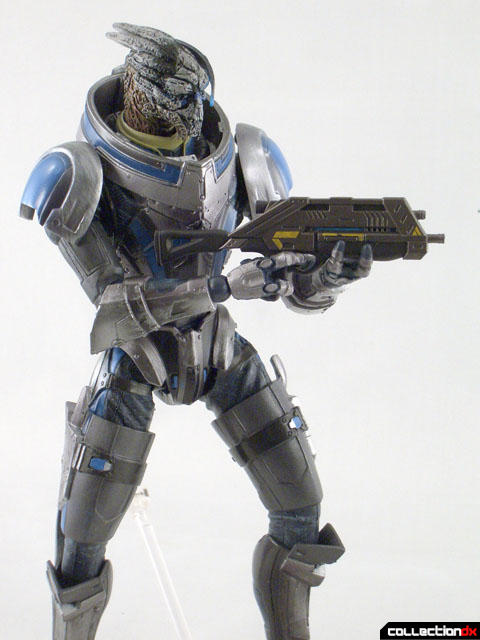 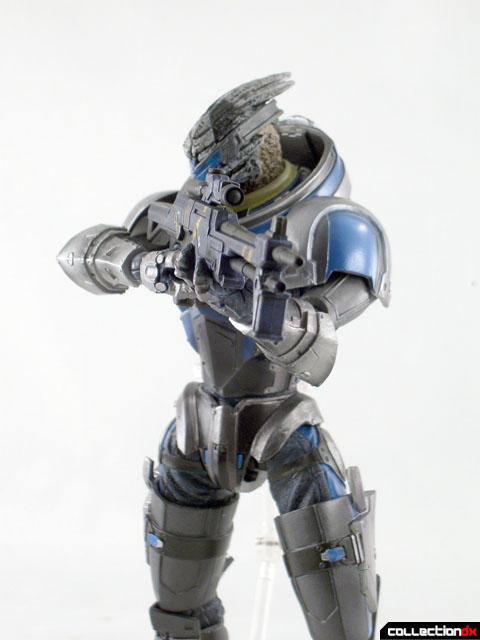 Garrus stands about nine and a half inches tall and is very heavy for an “action figure.” 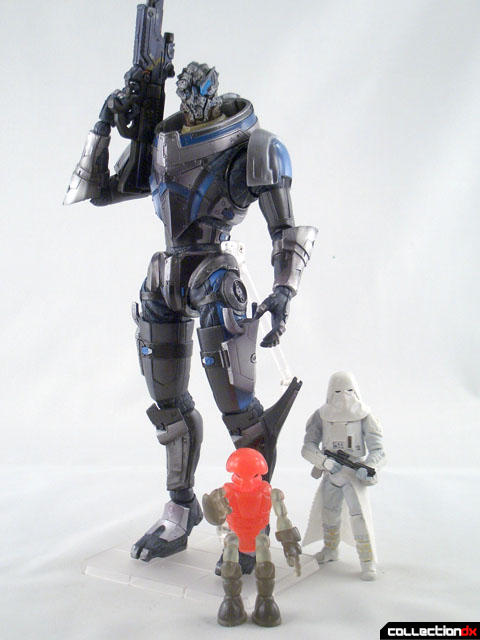 The figure itself is pretty nice. The first thing you notice when you get him out of the package is how heavy he is. 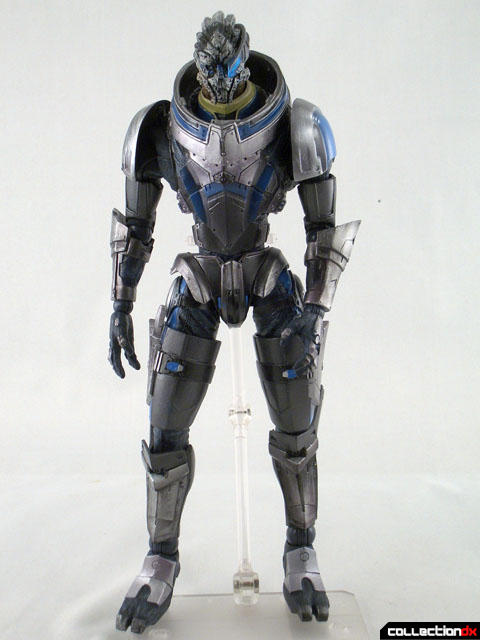 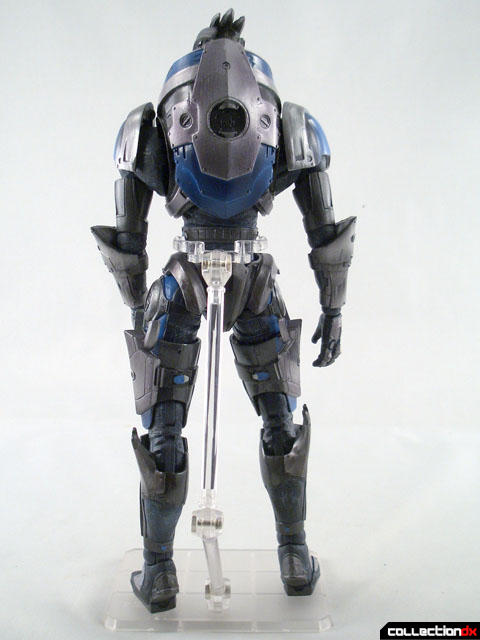 The face paint is much better than on the human characters I have so far, but they did seem to shy away from painting in the scars on his right side fully. Kind of the opposite problem from Shepard and Ashley. 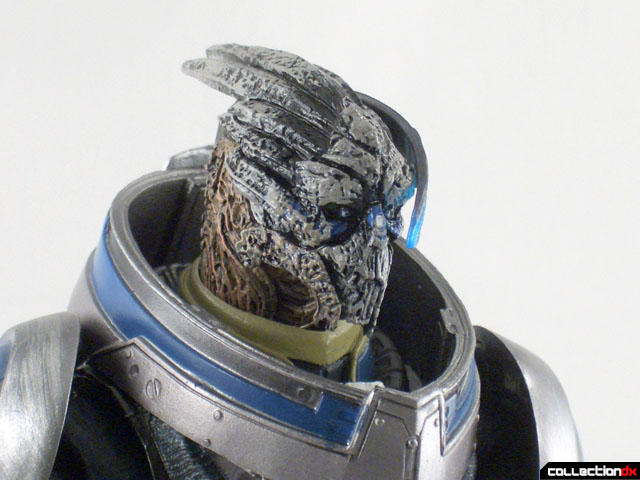 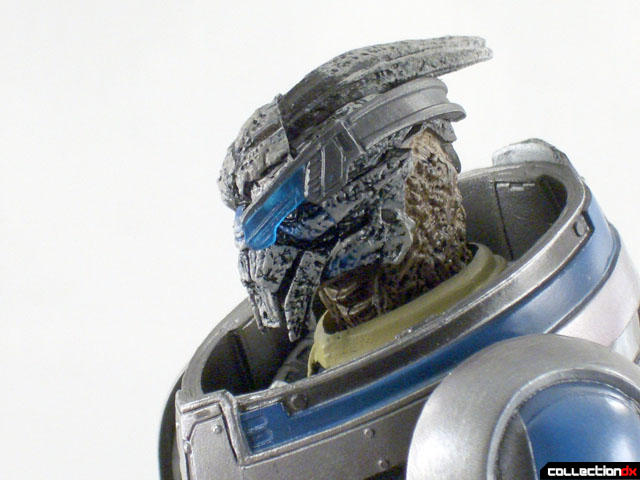 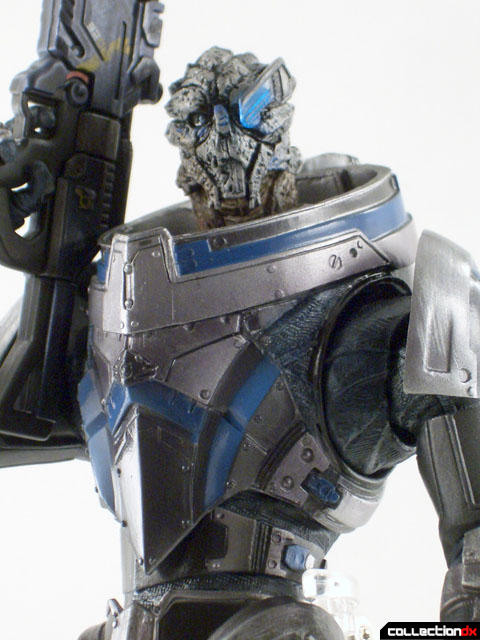 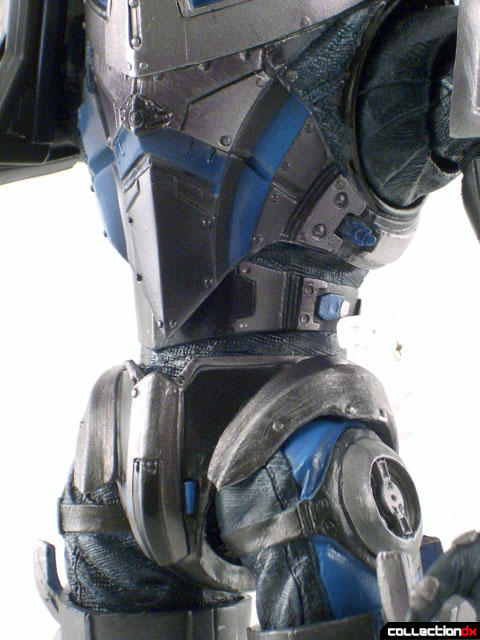 His armor suit is immaculately detailed and painted in. No detail is spared. 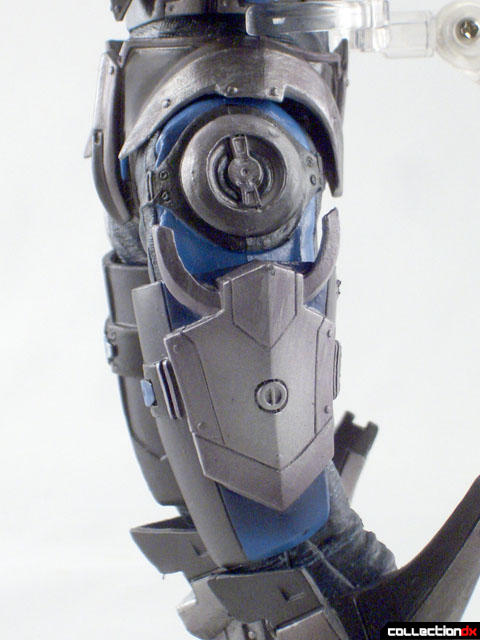 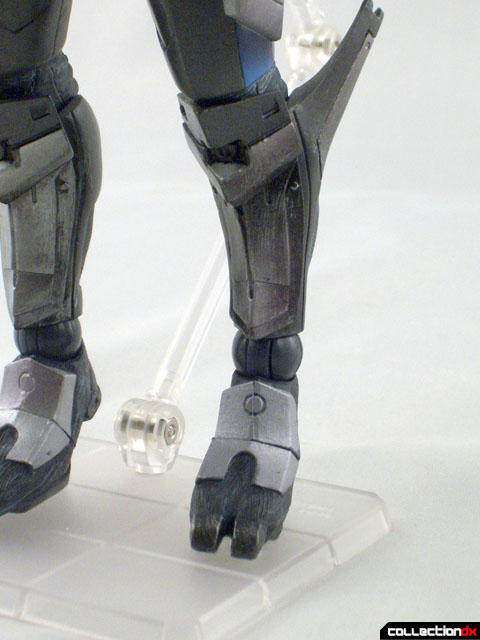 For a figure with 26 points of articulation, including heavy ratchet joints in the hips and smaller ball join ratchets in the elbows, wrists, and ankles he has a very hard time not falling over. My Garrus has taken three shelf dives before I pulled out an S.H.Figuarts stand to brace him up. 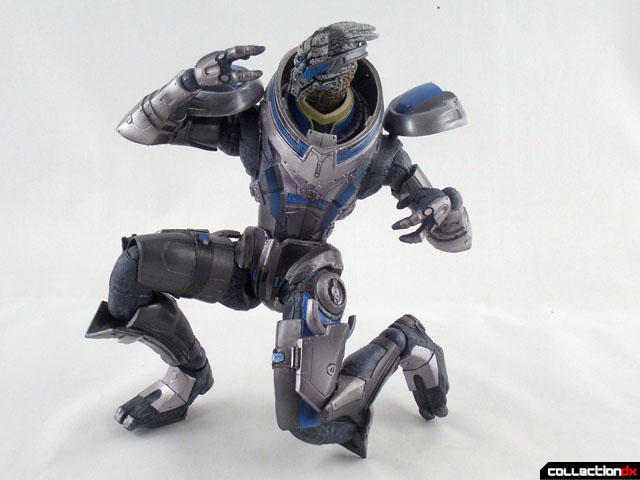 It’s a combination of things that make posing him in more dynamic stances difficult. It’s a combination of the weight of his top half, the odd cut of Turian feet, and mildly “weak” ankle joints. Even if you get him in a good stable pose odds are good the ankle joint ratchet will give under the weight sooner or later. So a word of warning when you get him is to make sure he is stable. You wouldn't want to break your bro. 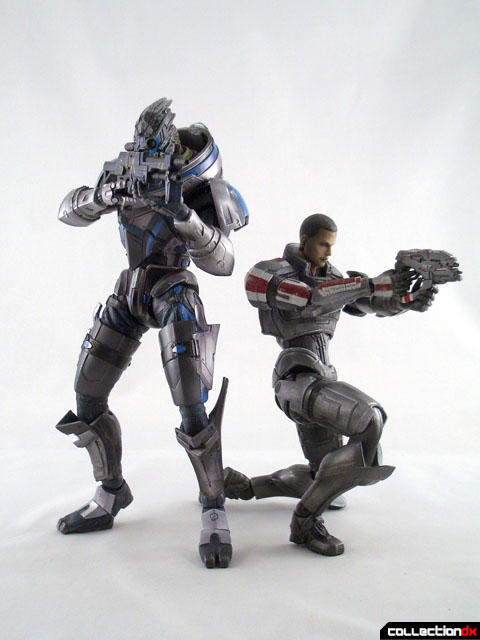 Despite my complaints about posing him I am very happy with the release. $65 dollars is not cheap for an “action figure” but as the pics and video show you what you get is worth the higher price. Any self-respecting fan of the Mass Effect franchise should be running, not walking to get one.

4 comments posted
I'm glad to see you guys are

I'm glad to see you guys are finally using a scale comparison figure like the Storm Trooper. It seems like you always use that little red guy thing, which doesn't mean anything to me to show scale/size...

They couldn't mess up the head sculpt on Garrus because he was already so ugly. LOLOLOLOLOLO-

I don't even LIKE Garrus that much and I can't deny it.

Excellent review! The play arts stuff has definitely caught my interest, although I only grabbed Garrus this time around - I played with a female Sheppard ( seeing Sheppard as a male in the footage is amusingly strange), and as I only casually played the first game, [ME1 SPOILER!] my actions weirdly caused Ashley to kill a beloved character in cold blood, I sent her to her death. [ME1 SPOILER!]/END]. I hope they release the rest of the characters.
I also hope that there are some alternate heads produced to match the many customizations players choose (as Adam mentioned in last week's show).

The CDX exclusive Pheyden comes from Onell Design's Glyos toy line - a toy line you should really get into for a bunch of reasons you'll come to understand once you pick up a few and interact with the wonderfully talented folks behind them.

That being said, as Glyos is nowhere near as recognizable as a Stormtrooper, I think your point is understandable. Perhaps the CDX home page or each review page could have a simple size comparison between a Pheyden and a Star wars figure? That way the Glyos scale is understood by more people, no one feels left out, and Glyos figures get more exposure.