I had just about gotten used to getting teeny SD figures in the ES Gokin line. I had been wishing for another release similar in size to their excellent Goshogun release. They heard my call. They released this Tetsujin 28 FX.

Although the figure breaks the traditional numbering of ES-XX, it is still labeled as an ES Gokin. This time its numbered FX-01. It still features the beautiful boxes we've become accustomed to seeing in this line. 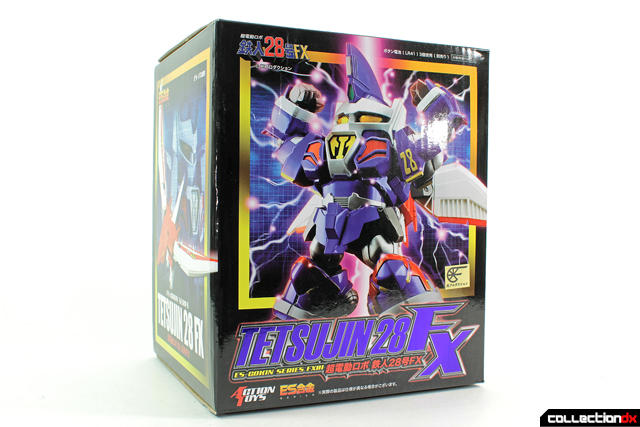 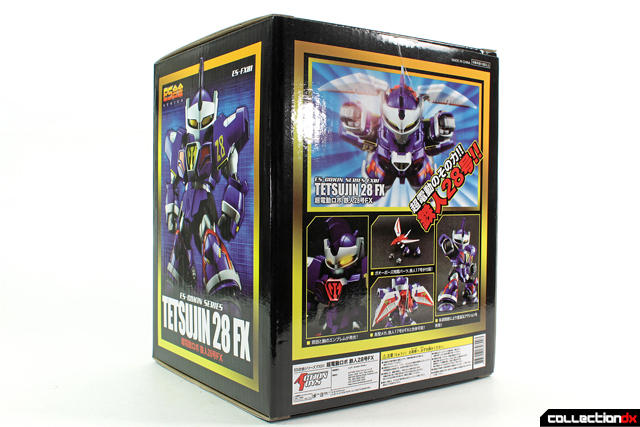 Like I said, recent ES Gokins have been teeny, especially Gaiking and the first Getter releases. Seems there is no consistency to their scaling between each release is all over the place. I'd like to know how they base their decision in sizing. In any case, this thing is sized right and feels nice and hefty in hand. Of course there is no ignoring the beautiful blue metallic finish. 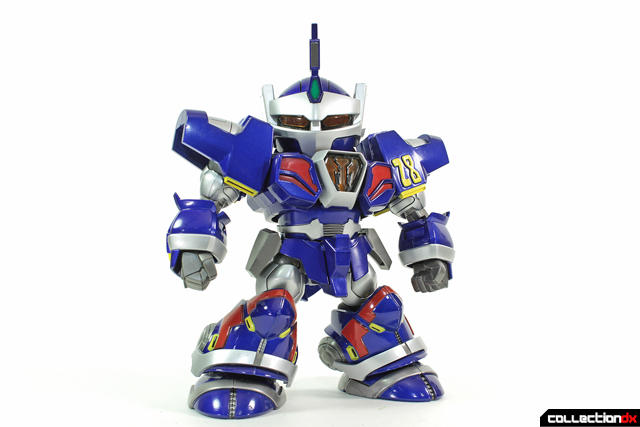 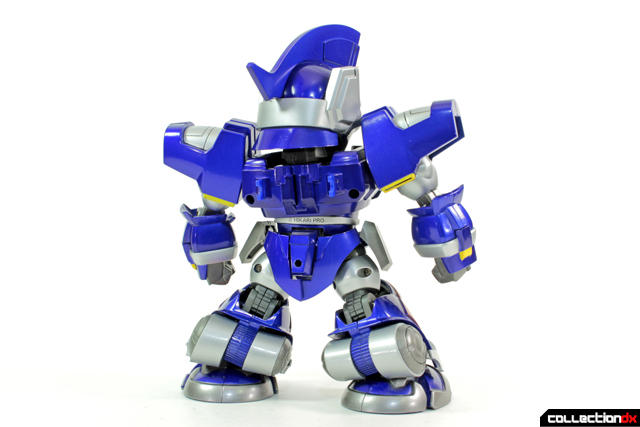 You'll notice the eyes are made of a clear yellow plastic... 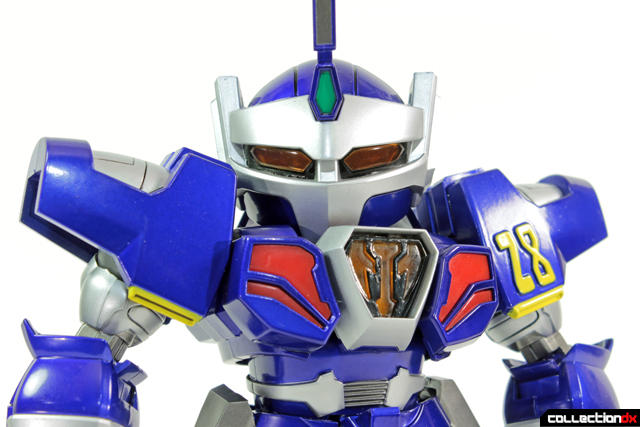 ...which allows the LED eyes to shine through. The chest which serves as a button, also lights up. This gimmick requires 3 LR41 button-type batteries. 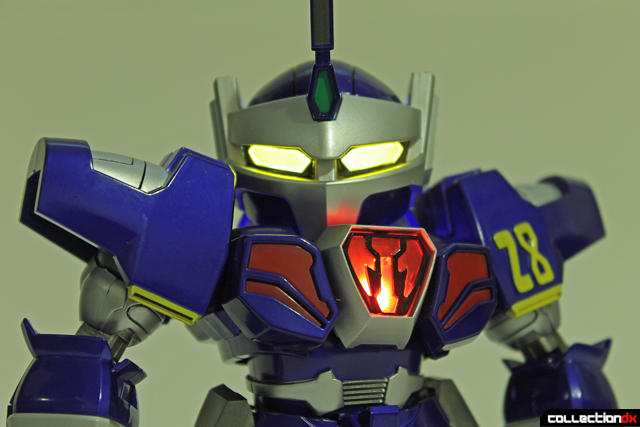 They really kicked it up a notch with this figure. While most previous releases were for the most part molded in colored plastic in certain parts, this one seems to be coated in paint everywhere you look. The paint has been sprayed and masked pretty well. Of course I did find some touch up and a piece of glued paper on the back of the foot. The chip on the grey band on the foot has a factory touch up and fortunately the goop left over from the paper on the rear of the foot came off with a good polish. Otherwise sexy. 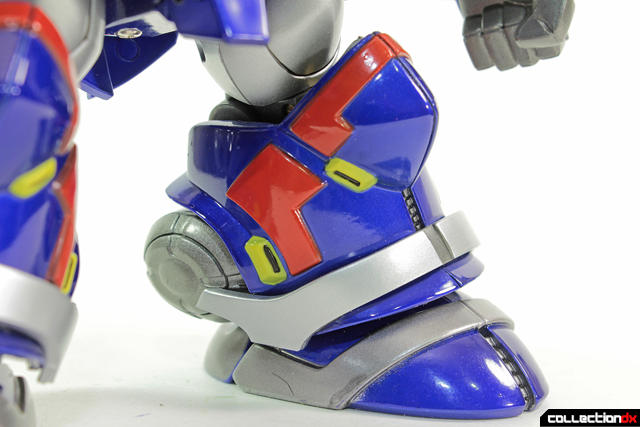 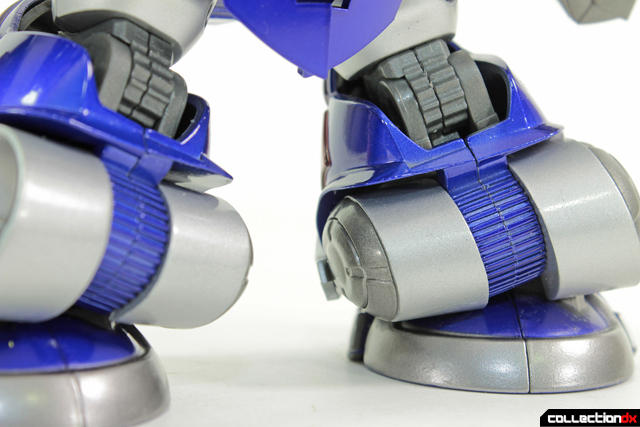 Check out the shine on the shoulder armor. Also pay attention to the size. 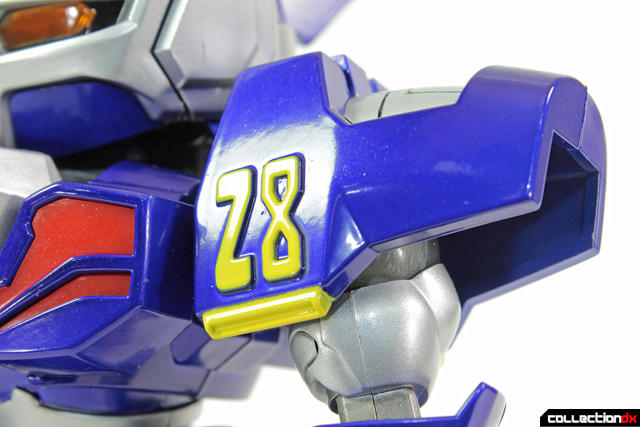 Now check it out in this picture. Much smaller right? Well it comes with smaller armor for both shoulders. I only swapped the one on the right for this picture to show size difference. 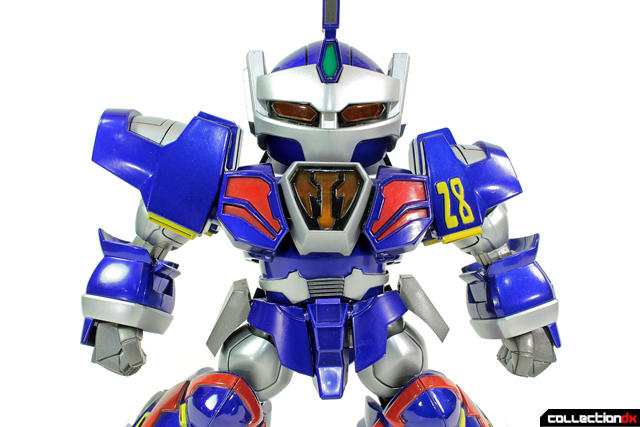 The reason for those smaller pieces of the armor is to allow this famous pose. 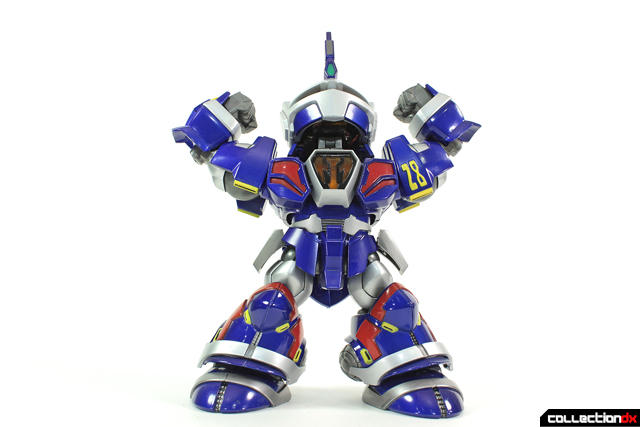 Also included is the Tetsujin 17 Phoenix which oddly enough looks like a Korean bootleg of Laserbeak which is shown here for comparison. 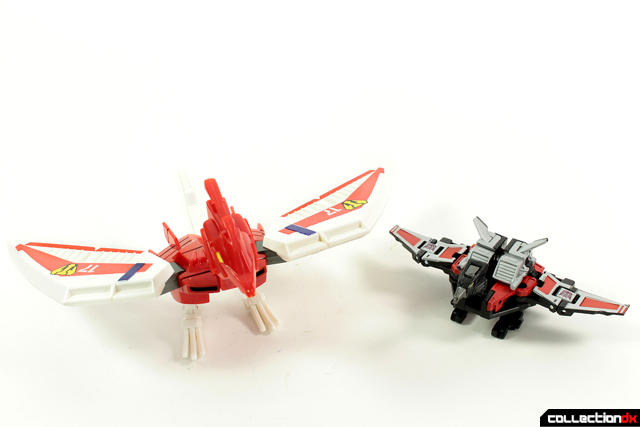 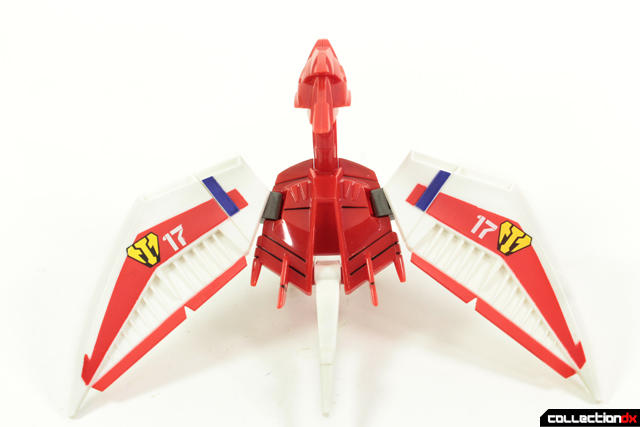 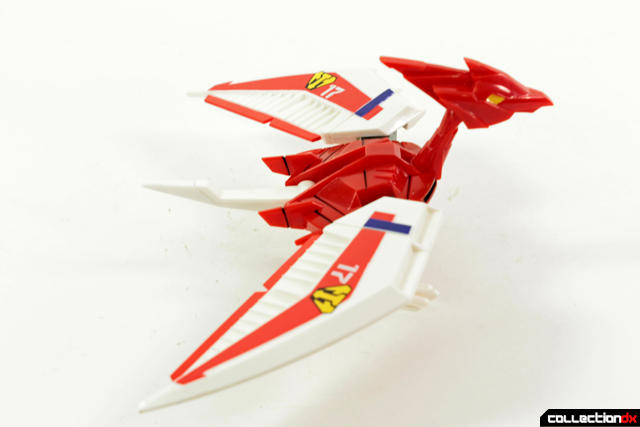 The Phoenix folds up a bit to become sort of like a Scrander which powers up Tetsujin. 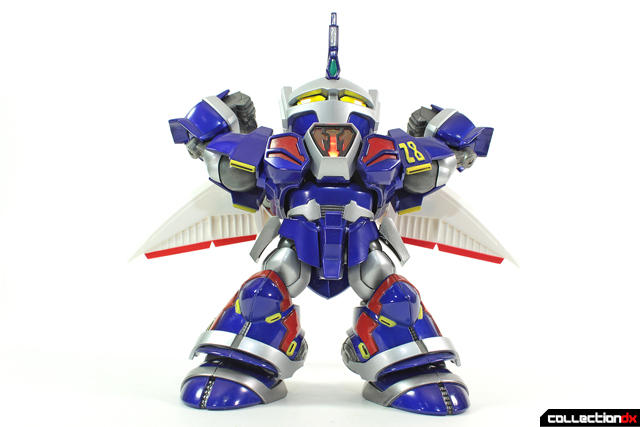 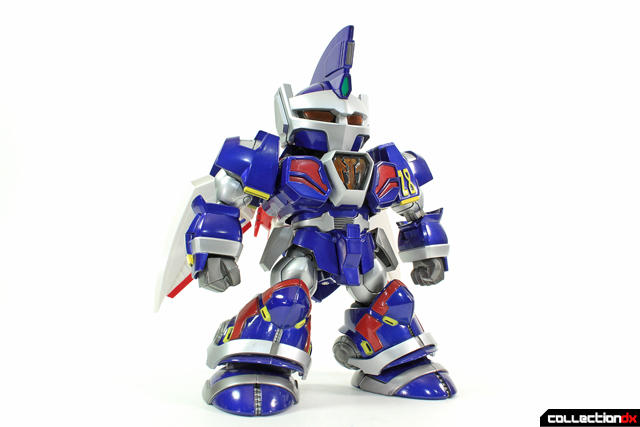 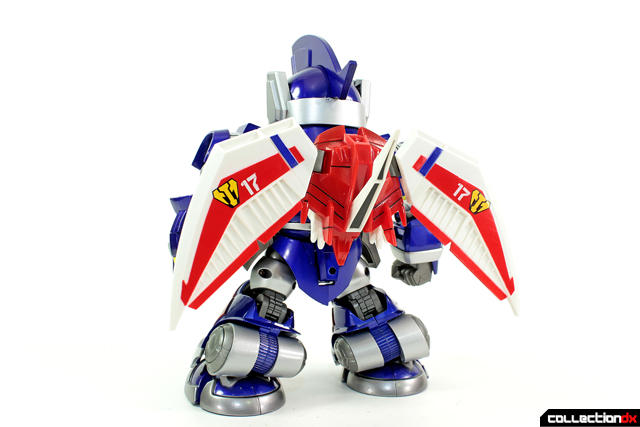 The wings fold up while docked. Unfortunately one of the wings is really loose and does not easily stay in the upright position. 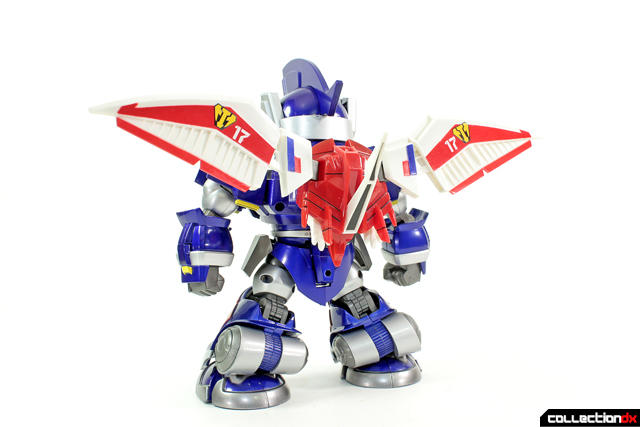 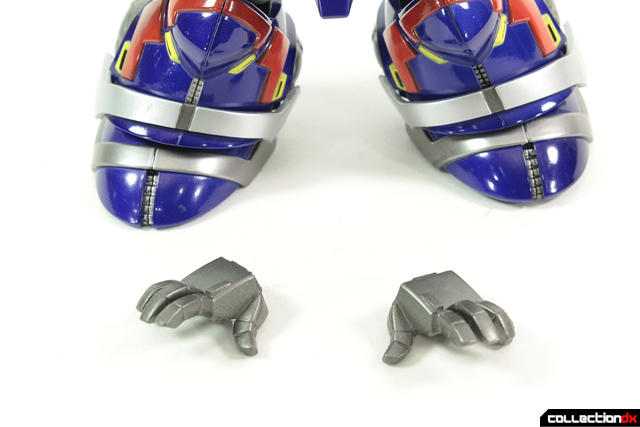 I prefer the fists themselves. 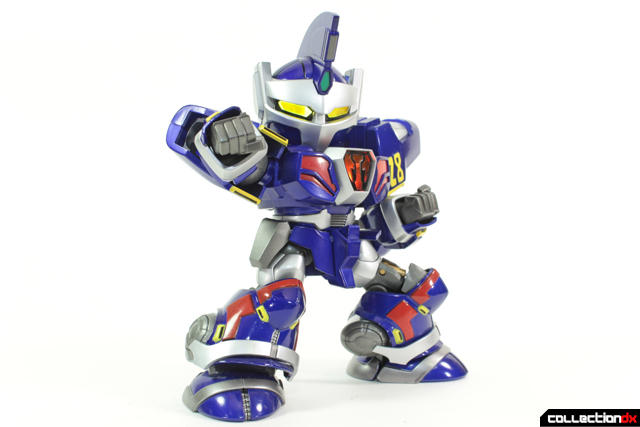 One small detail I overlooked was the working pistons behind the knee. Something that could have easily been left out but wasn't. 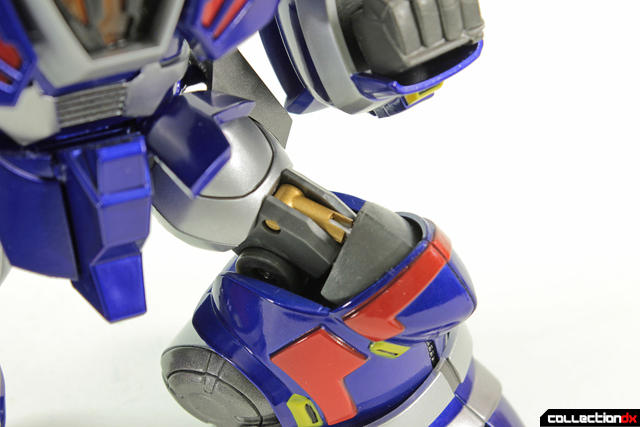 Here he is in comparison with Yamato's Metal Boy Grendizer and ES Gokin's own Gaiking. 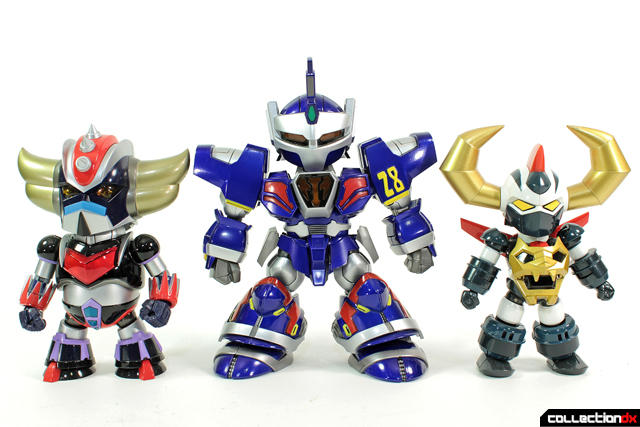 So I've yet to have a Fewture made product without the usual fingerprint, chip, bad touch up etc etc, but it's hard to fault them much more than that because they do make some really cool figures. I am very happy to add this to my collection.