Home » The Fwoosh » Fumetsu the Undying

The Articulated Icons line is a series of toys launched on kickstarter by The Fwoosh, with the Feudal series being the first in what The Fwoosh claims will be a line of themed toys. Fumetsu comes packaged in a lightweight cardboard window box with plastic tray insert. 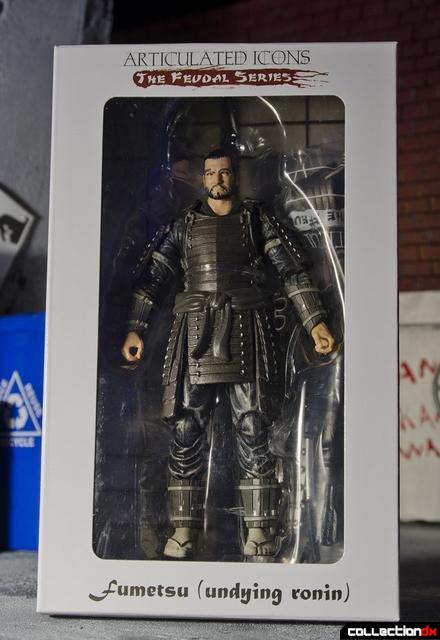 So right up front, im just going to let you know that this going to be a harsh review, and before I jump into it, I feel like I need a make a few points so that people understand where I'm coming from. When the kickstarter campaign was launched, one of The Fwoosh's main selling points was that "They were toy collectors too, and they knew what people wanted". Secondly, delivery was delayed several times due to quality and production issues. Also keep in mind that this is a figure that retails for $45, and as such, I'm judging it based off of other releases in that price range.

Alright, now that that's out of the way, lets jump into it.

In the box, you will find Fumetsu in full armor (some of wich is removable) and a very nice assortment of weapons. Included you will find a mace, daito and shoto with sheath, spear, bow, quiver, arrow, masked face, helmet with two different face guards and two different crests. I was very impressed the all of the included weapons and the customizable helmet in particular. The Swords can be worn on the back or at the hip and the arrows can be taken out of the quiver (although in a one giant mass, not individually). The sheath for my swords was not glued at the ends and liked to come apart wich was an easy fix, however the swords liked to slide out on their own wich was frustrating while trying to pose the figure. The head was also very tight and not easy to change out. One thing that stood out to me in particular was the lack of any extra hands. Fumetsu comes with two weapon holding hands and thats it. For a company that claims to be in tune with what collectors want (not to mention the $45 price point), no extra hands is a cardinal sin. 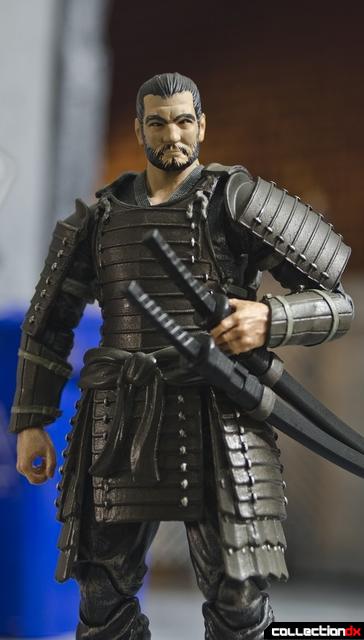 The armor on the shoulders and forearms can be removed, but the chest armor is glued together and I couldn't take it off without damaging it. Seems like a real missed opportunity, especially in a line that promotes swap ability. 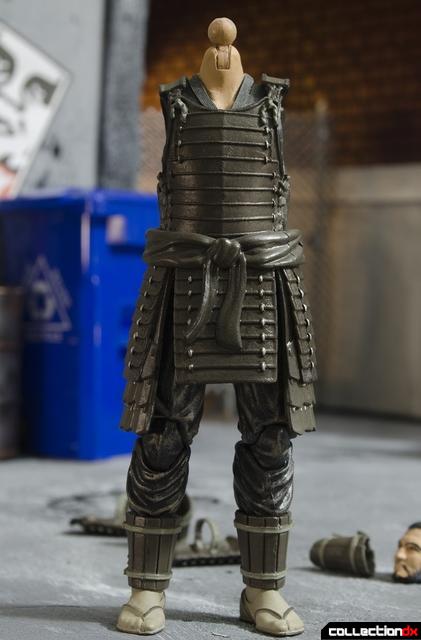 All armored, and armed up, he looks very, very nice. 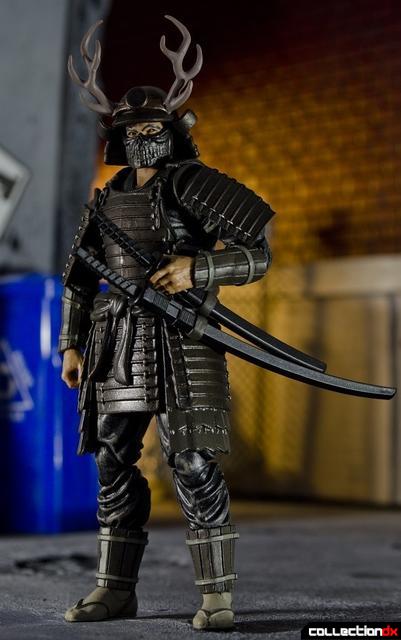 The articulation scheme seems to be borrowed pretty heavily from the Legends line, with the hips and wrists being the exceptions. The hips have a very wide range of motion and allow for nice deep crouches without the use of a pull down joint. The wrists are on a dedicated universal joint and also allow for a wide range of motion. 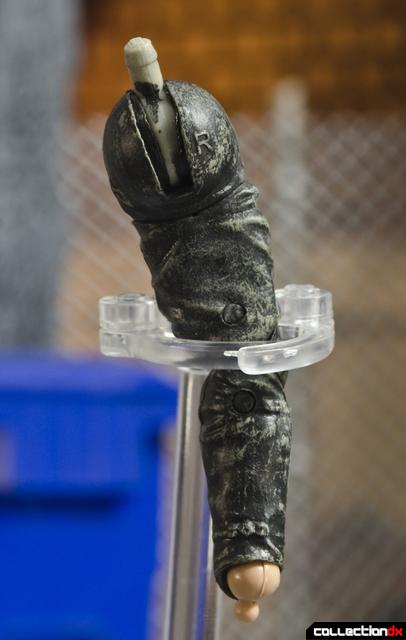 Both of these are very welcome features. Unfortunately, that's about the only thing remarkable about the articulation. The chest crunch is about half what I would like it to be and the shoulders are on a standard swivel and hinge rather than a butterfly joint that you would expect to see on a highly articulated figure. Not a big deal for the heavily armored Fumetsu, but this is the same buck they use for the Ninjas. On top of that, the figure is a mixture of overly tight, and overly loose joints. The hips in particular were very scary to pose and felt like they might break. After being heated and cooled and slowly worked, I managed to loosen them up, but after the figure had been posed for a while they went back to being scary tight. You notice that I don't really have any dynamic poses here, and thats because between the swords falling out, the hands falling off, and the hips locking up, the figure was extremely frustrating to handle. 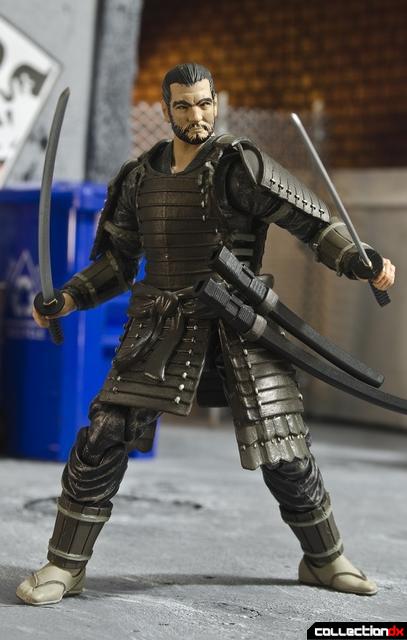 The wrists are so loose that I had a hard time getting the figure to hold anything up, and on top of that, the hands like to pop off the tiny ball that holds them to the wrist. Additionally, Fumetsu's armor reduced the range of motion in his shoulders so much, that holding a weapon with two hands was an extremely frustrating affair. The elbows and knees are OK, but have more give in them than I would like. Overall the figure kind of feels like a prototype, or maybe a knock off a better figure. If you've ever handled a Neca figure, Fumetsu will feel very familiar. 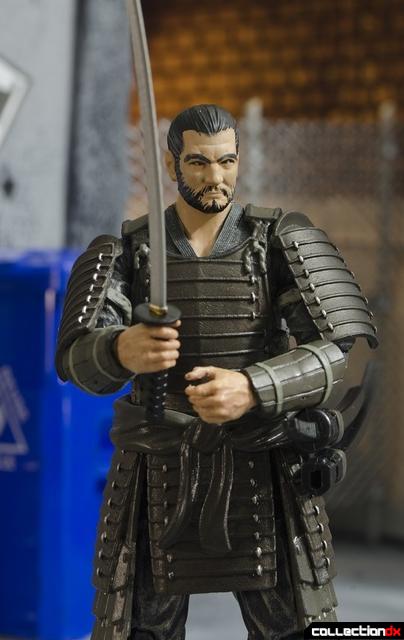 The paint is a mixed bag. There is a lot of detail here, but it's not particularly sharp, and feels thick in some places. The eyes are a little bug eyed and the paint on the crest of the helmet is off. If this was a Marvel Legends from 2015 or before, it would fit right in, but on a shelf with other $45 figures, it's going to stand out like a sore thumb. 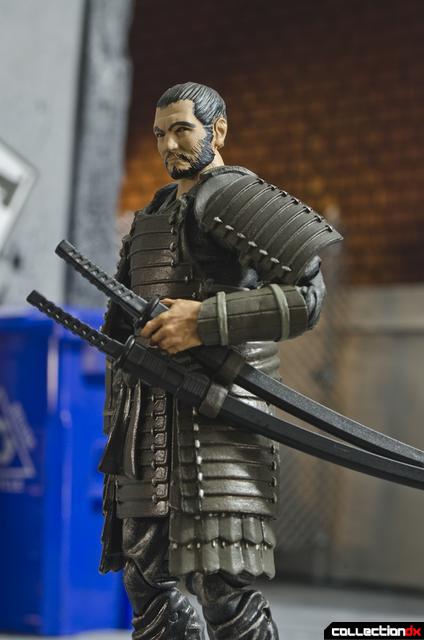 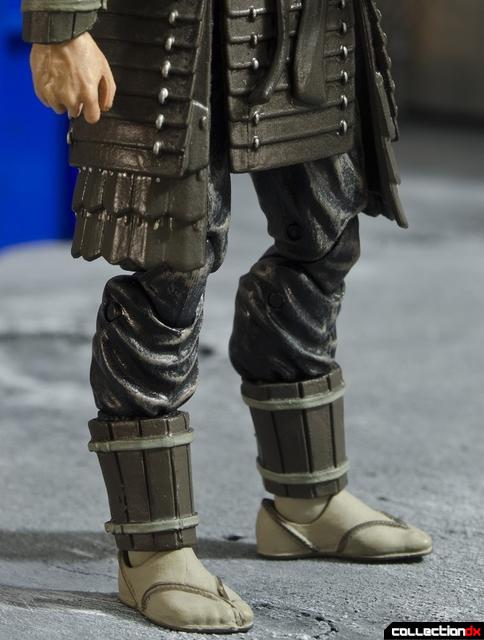 The quality control overall leaves something to be desired. Mine came with two right arms (a left arm was promptly shipped to me) and stuck hips, both of wich seem to be common with the line as are breakages, paint errors, and missing accessories. All lines have their issues and no one is immune from the occasionally dud, but it seems there is an abnormally high rate of QC issues, especially when you consider that the line was delayed for over a year to fix issues. Thankfully, the Fwoosh is standing by their product and providing replacement figures and parts as necessary, wich is very nice to see from a company, and I applaud them for it.

At the end of the day, Fumetsu is nice looking, but very frustrating, and simply not worth $45. Compared to other figures in this price range, Fumetsu is severely lacking in every category save for accessories.