The '80s were a great time to be a kid. In terms of toys, it was truly the age of excess. Kids at that time had such a wide variety of toys to choose from and many of the toy lines available had their own playsets. Often these playsets were large and extravagant with many features. One of my absolute favorites from this time was the Fortress Of Fangs from LJN's Advanced Dungeons And Dragons line.

I've actually owned this toy three times in my life. The first time was as a child when I received it for Christmas in the winter of 1983. Even to this day, when I think of Christmas, it's this year that I think of. I can still vividly remember opening this and many other of the fantasy themed toys of the day. Looking at it now, I can practically hear Lionel Ritchie's "All Night Long" playing in the background. (Truthfully, I can actually hear it because I'm listening to it as I type!)

Later, I would buy it again as an adult when I lived in Atlanta and was getting back into toy collecting. But at that time, I was mostly buying robots and this fantasy toy just didn't seem to fit with everything else I had. So I later sold it. Bad idea. About a decade later, I decided I just had to have it again and now that my collection is more diversified, it fits better and I display it proudly. 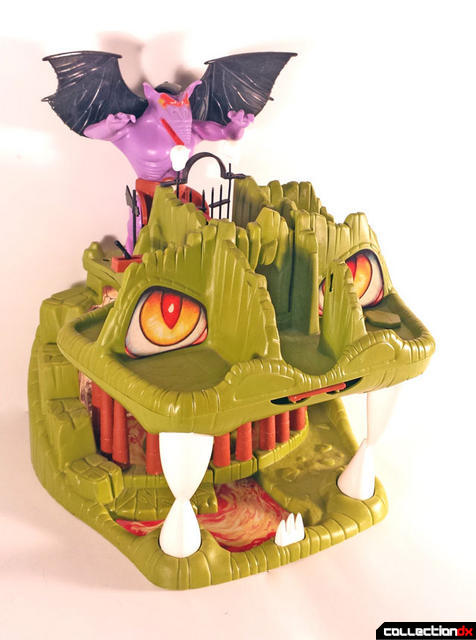 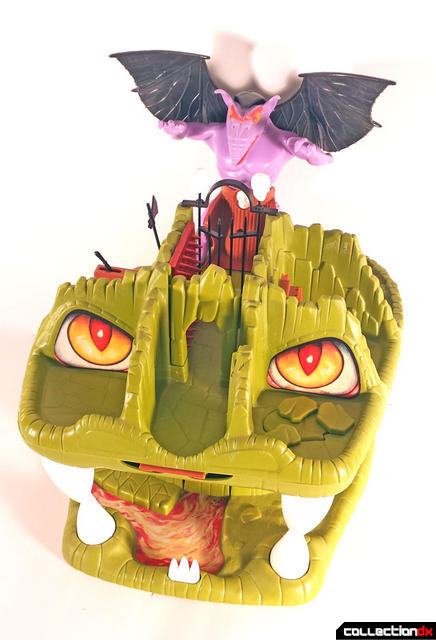 From a collectible standpoint, this isn't that difficult a playset to get but it can be really hard to get one complete and in the original box. Although the toy itself is pretty compact, it was sold in pieces that needed to be assembled and as a result the box is surprisingly large, measuring a whopping 30.5" x 14.5" x 8.5". The front of the box features beautiful painted artwork by the great Ken Kelly, known mostly in toy circles for his work with the Mego Micronauts and Matchbox Voltron. Besides the dungeon itself, other AD&D characters like Warduke, Strongheart, Kelek, Northlord, and Elkhorn, as well as Bronze Dragon and Destrier, are shown. 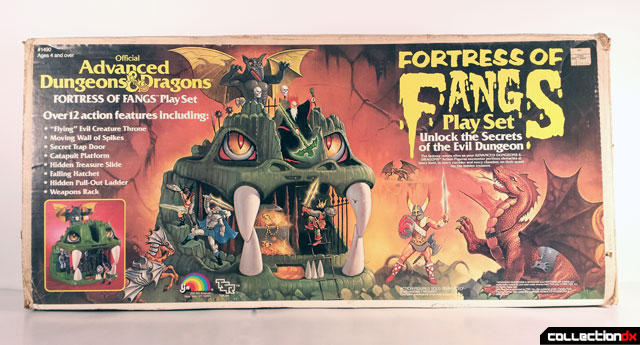 Once you get the Fortress assembled (the use of a screwdriver is needed), you can begin your adventure!

As you approach the lower level, you can spy some precious booty in the innermost parts of the fortress. But first you must traverse the stalagmites that looks suspiciously like teeth! 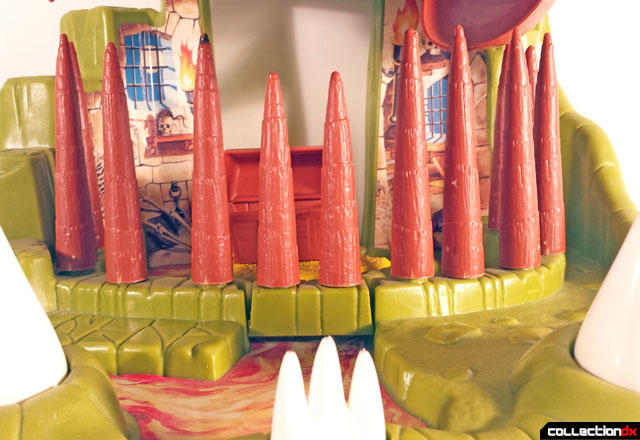 Furthermore, a literal river of fire flows along the floor and you must take heed not to suffer the same fate as those that came before you! 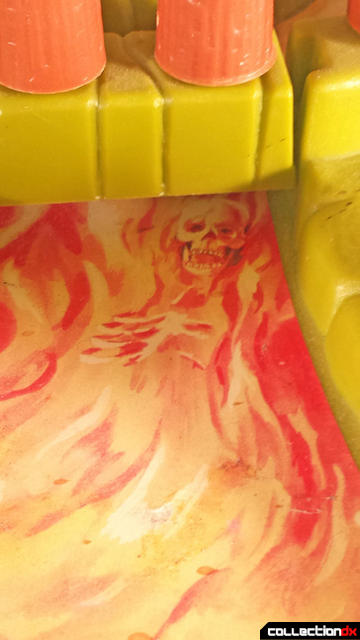 As you approach, two of the stalagmites lower forming a sort of drawbridge you can use to gain access to the inner chamber.

Your journey is off to a good start as you've captured some gold! 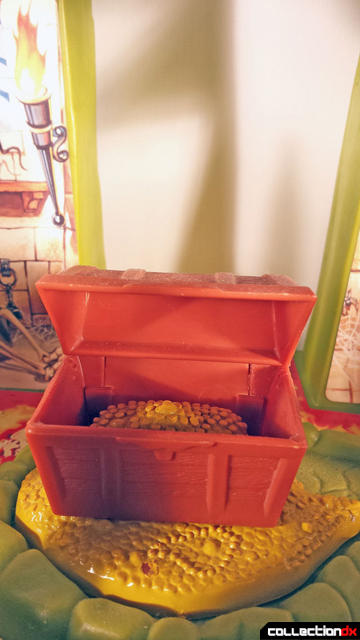 But more remains of previous adventurers warn you not to let your guard down. 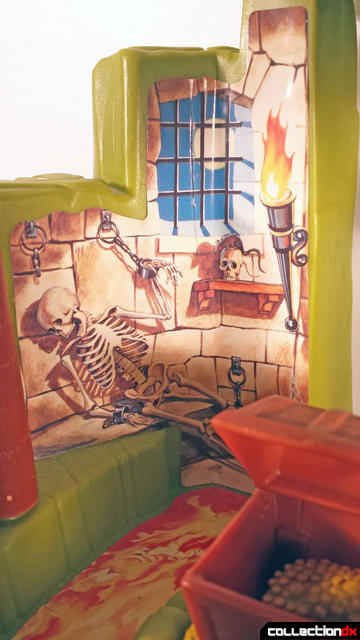 To your right is a trap-door and a staircase...but you'll have to use your imagination to go use them! 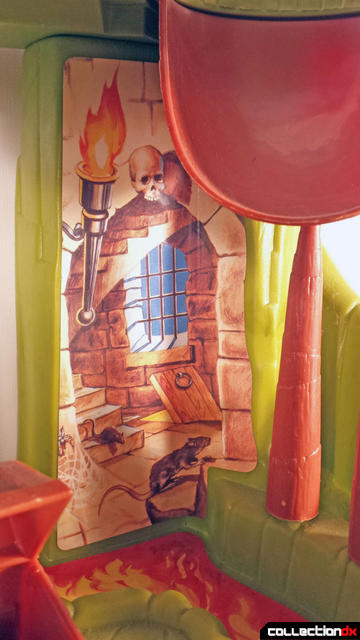 Instead, you circle back to where you started and try the staircase you spotted on the left of the building. 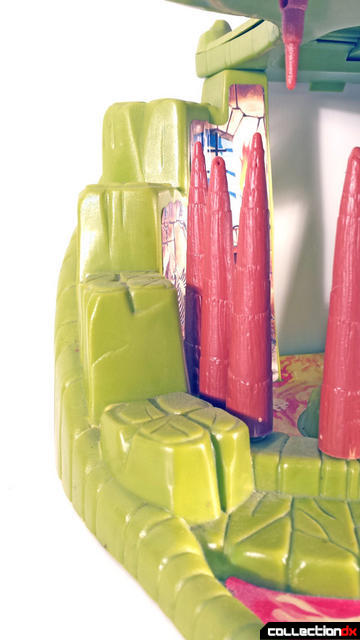 As you reach the top of the steps, a large axe leans against the wall. 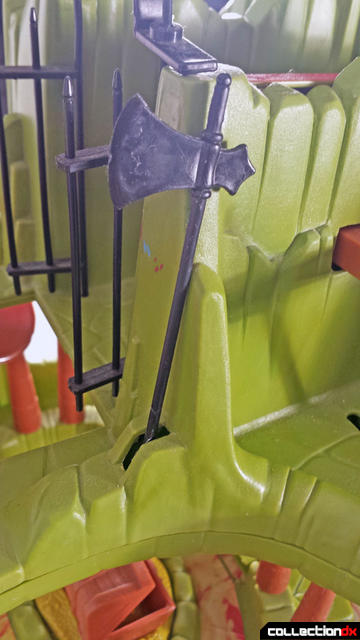 If you're not careful, it might just fall and end your adventure prematurely! 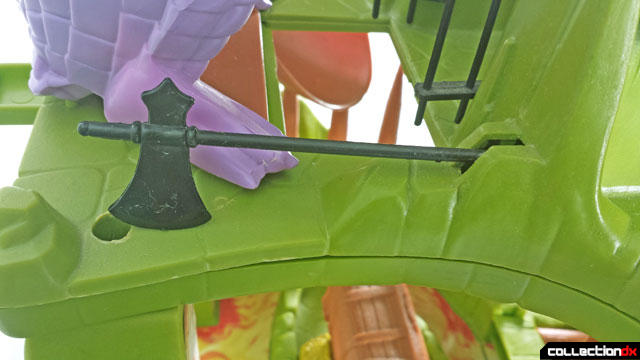 Perhaps you'd better not risk and try to find another way to the second level? Luckily for you, such a way exists! Back around to where you started, you now find something that wasn't there before... a ladder! Do you go up it? 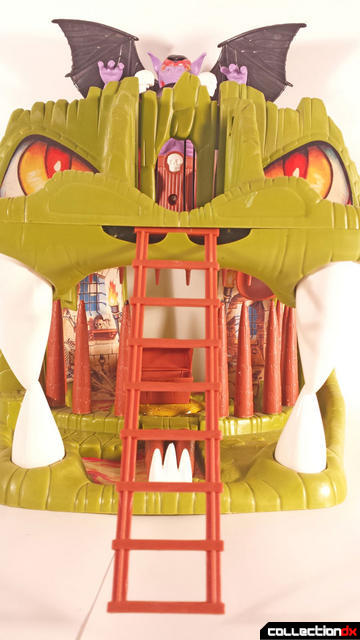 OF COURSE YOU DO! Reaching the top, you see a corridor ahead of you and an opening to your right. Which way do you choose? 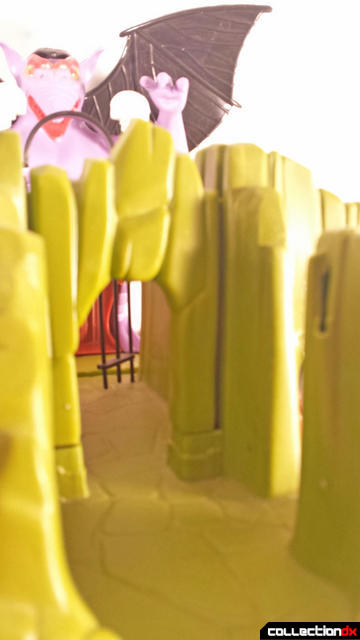 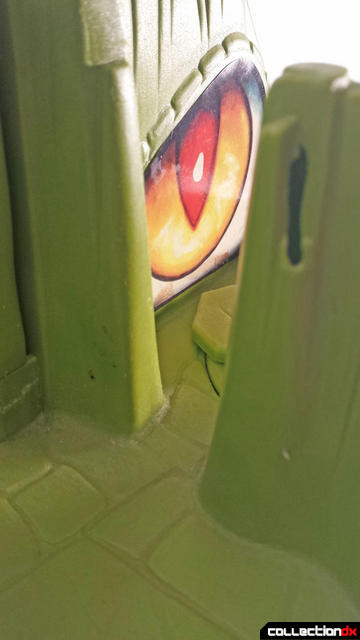 There seems to be nothing over here but some loose stones... WAIT! It's a booby-trap! 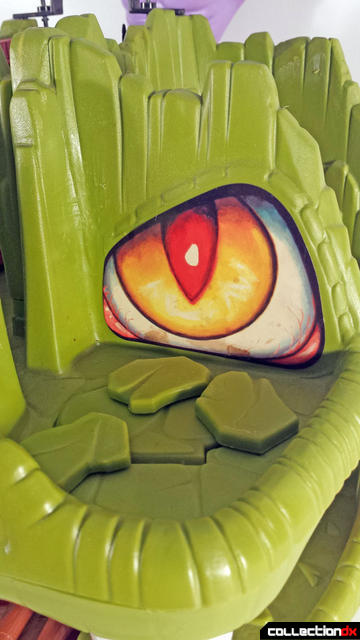 If you had gone in there, you'd have been thrown to your death!* But after an initial misstep, you caught yourself in time to adventure on! But that leaves only one other option...the corridor. The entryway is small, but you find a way to slide the wall up to make more room. 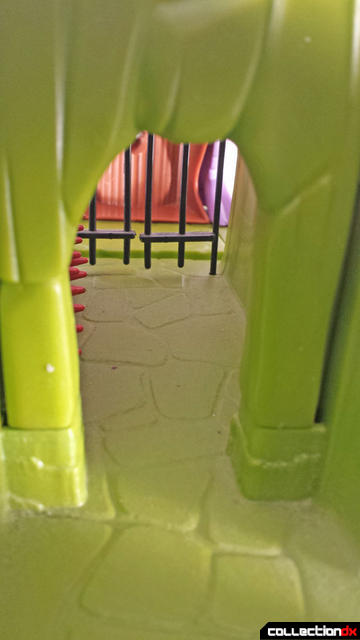 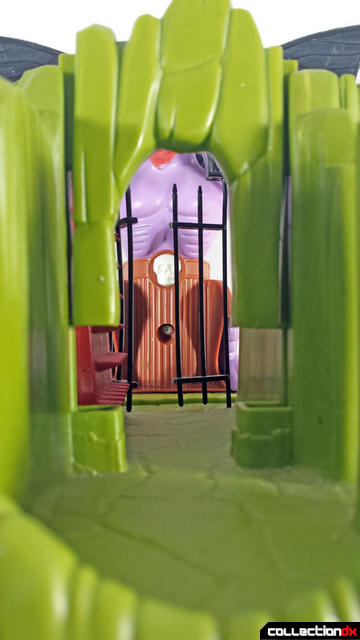 You see the gate ahead and the way to your final goal. But it too looks wrought with peril! 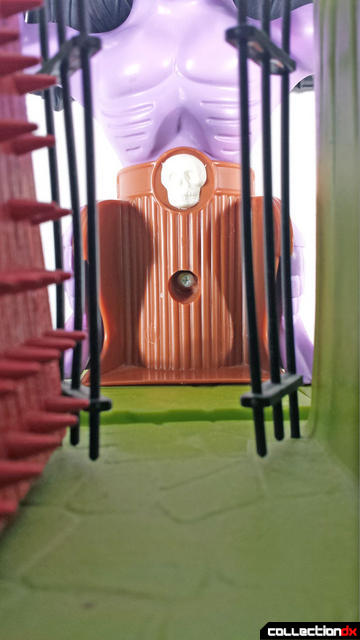 Surely you cannot trust a wall that has spikes on it! 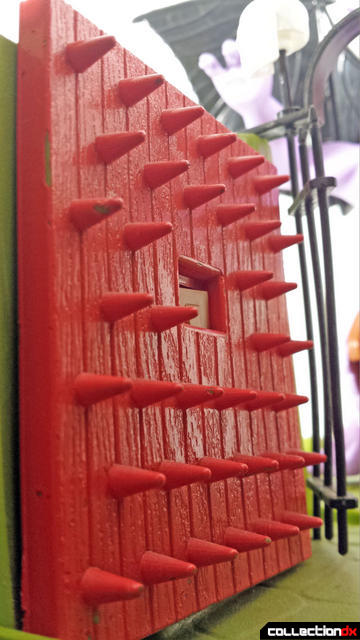 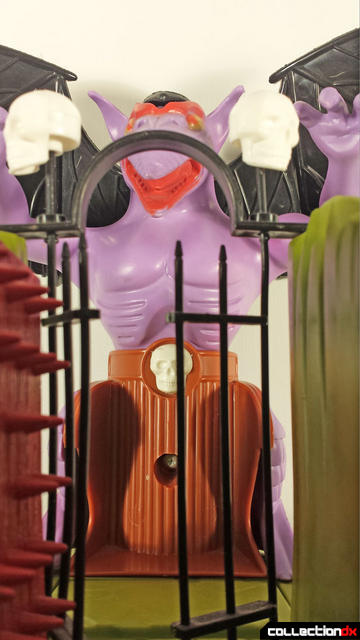 "Phew!", you exclaim, well aware that a moment's hesitation would have cost you your life. You look back in relief, unsure of how you even triggered the wall's movement. Perhaps an unseen enemy is controlling it 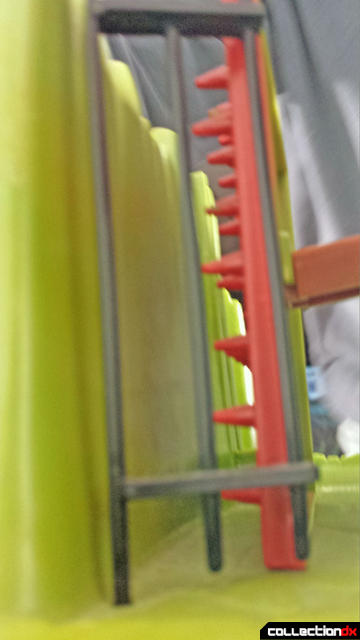 "Now to enter the throne room", you say triumphantly. But some intuition tells you to stand where you are and closely observe your surroundings first. "Those cracks in the floor look too straight to be naturally made!" 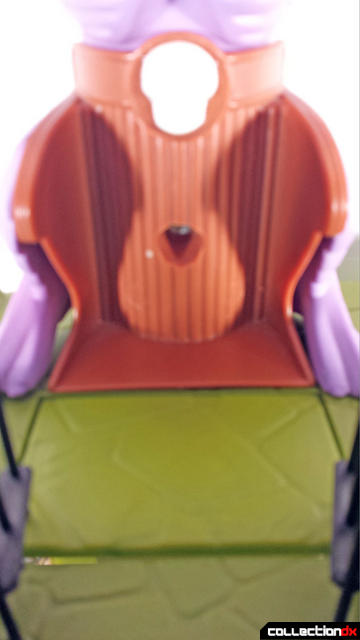 Though it pains you to lose some of your previously acquired bounty, you toss some of the gold coins you found downstairs into the room to see what happens...and a trap door falls in!! 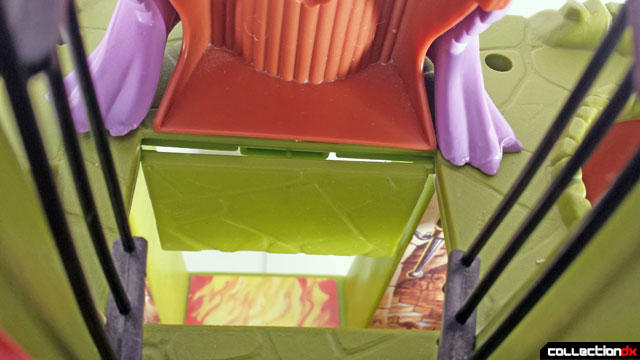 "Now what do I do?!?! I'm stuck!", you cry. Faced with the choice of turning back the way you came (and perhaps tempting fate a second time with that spiked wall is not such a good idea) or attempting to leap across the now gaping hole in the floor, you decide to test your leaping skills. (Rolls dice.) You made it!

Now you stand face to face with the Evil Creature Throne. 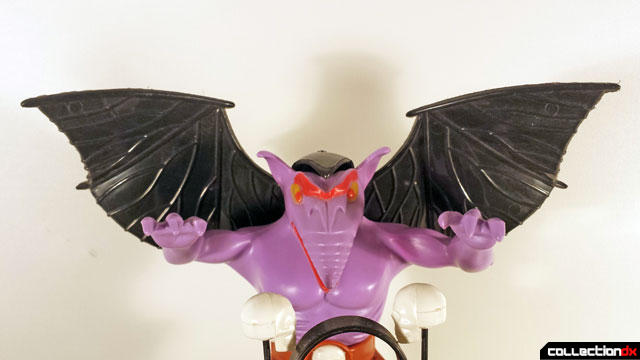 Behind that, you find a lever that activates the trap door in the floor. You push it back in and jam it so it doesn't open again. 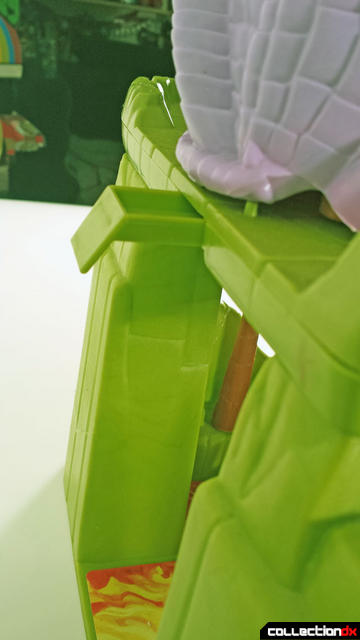 Now free to walk about, you find another hole in the floor, a slide that allows you to gain access back into the lower chambers. You slide down and retrace your steps back outside the Fortress, having conquered the perils within! 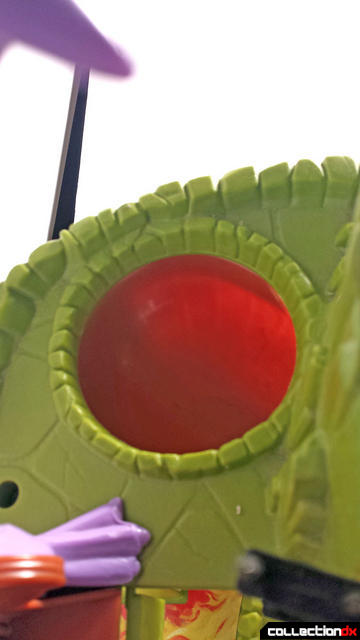 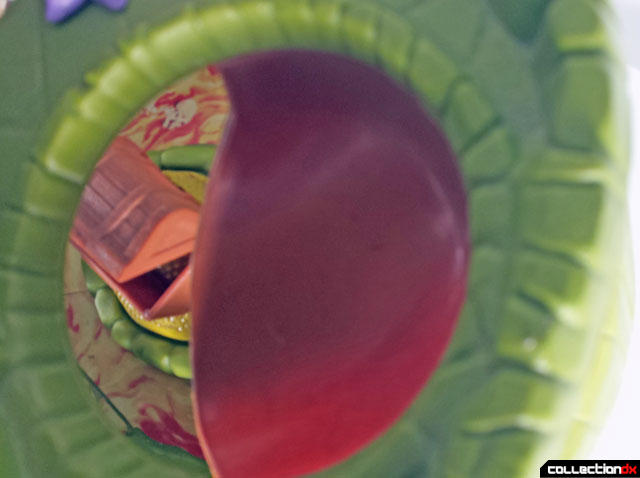 I hope my little walk through of this playset was somewhat amusing for you. If the layout of the playset is still at all unclear, this aerial view of it should give you a good idea of the location of each room, it's gimmicks and how they function. 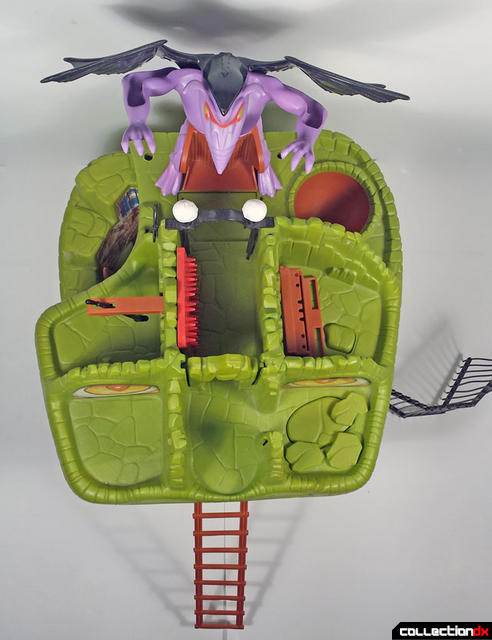 In addition to everything else mentioned previously, the set also comes with a 3-part spiked fence as well as a weapons rack. 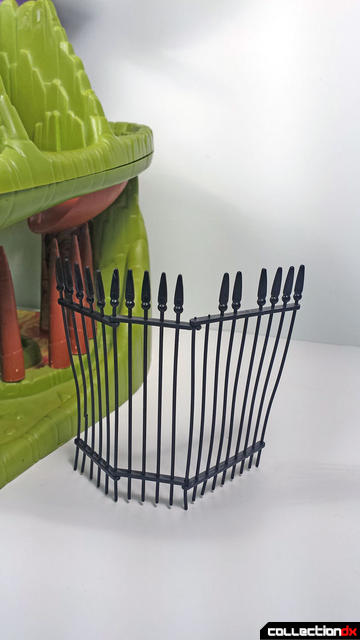 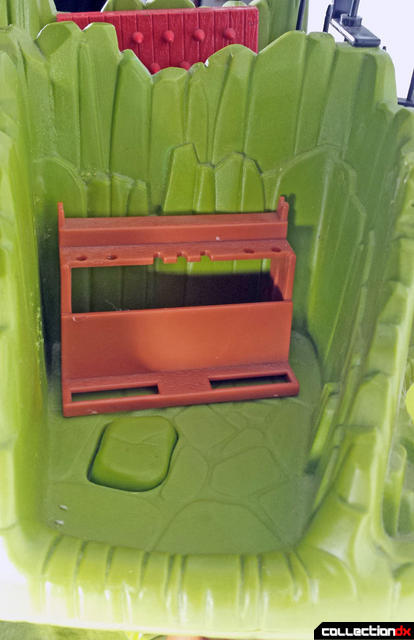 As much as I love this playset, I have to admit that it is not without it's flaws. Even as a child, it always annoyed me that some of the sections or rooms do not actually have any way to access them outside of having your action figures just climb over the walls! I never understood why each room didn't have an opening like the room with the booby-trapped floor does. And while the Evil Creature Throne is a neat design, it's not much of a throne if you can't sit on it and it would have been neat if it was articulated in some way so you could at least pretend that it sprang to life if you tried. These complaints aside, this remains one of my top 3 favorite fantasy playsets from my youth (along with the Arco Other World "Castle Zendo" and of course, the Masters Of The Universe "Castle Grayskull".)

*I would have loved to show this gimmick better, but unfortunately, one of the tabs that holds the floor piece in place is broken on mine and it no longer works properly. But I'm sure you can tell just by looking that the floor flips up and throws those stones when you press the button on the floor in the adjoining room.

8 comments posted
This is the best review ever,

This is the best review ever, of one of the best playsets of all time. I loved this thing to no end.

Yes- I love this set and all the LGN D&D figs. I had these at childhood too and mine is on display loaded up with all the D&D figs. This set looks great with them all over it!
I really wish they had made the other Snake Cave playset!

Oh hell yes! Fantastic. Thanks for this.

Thanks guys, I appreciate the support. Josh had asked me to review this a long ways back (and frankly, because I didn't think he liked these kinds of toy, I kind of thought he was either being sarcastic or just wanted to get me back on the site at the time!) and with all the other cool retro '80s reviews that had been going up, I figured I'd better get on it before someone else did! I'm glad it looks OK too since my camera battery died thus making this the first review I've ever shot entirely with my phone. LOL

Oh and we also need more playset reviews! I can't believe I had to create a category for them!

Even though I didn't have many playsets growing up (Four, but five if you count the TNMT Mini Technodrome) they were still something that I loved as a child. All of the different accessories, the sharp (and sometimes not so sharp) details, as well as everything being compact so you won't lose anything. These days I've seen maybe one or two playsets but nothing compared to what was available during the 90's. Is it just me or maybe I haven't been looking hard enough? I'm talking about non-Lego playsets only. You can find Lego stuff literally EVERYWHERE.

Epic Review. Dave at his finest. This is what CDX is about people. We bring it!