When Combiner Wars was announced, I thought it was a pretty cool idea. Despite that, I was feeling pretty okay about not owning all of the toys and just mostly ignoring it instead. And then a sale at Target combined with finding all of wave one at the same time happened. To say things went poorly would be awfully generous.

The first Deluxe that I opened was Firefly, mostly because his head looked awesome. Funny enough, he ended up being my favorite of the bunch.

Firefly is a nice red and white jet plane. It's definitely not a particularly realistic looking in its color choice, but something about it just screams to me of my childhood. Its garish colors and tacky paint applications look silly, but in a way that absolutely pleases me. 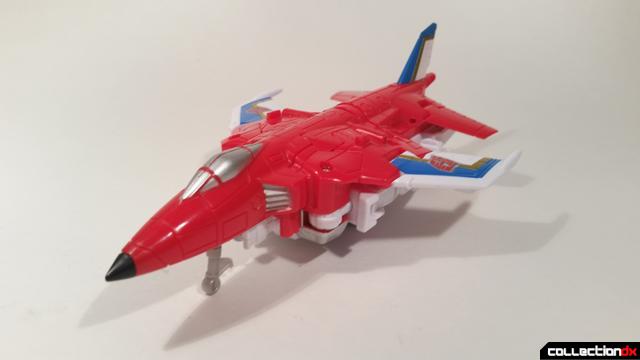 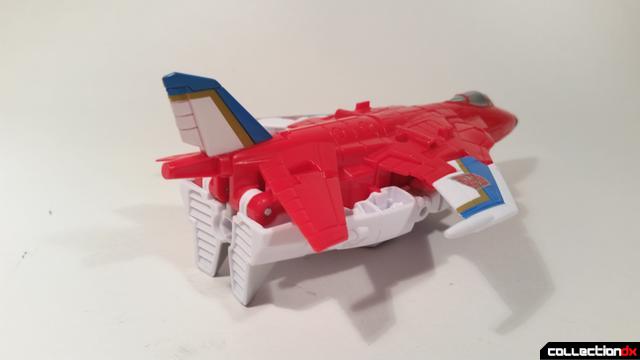 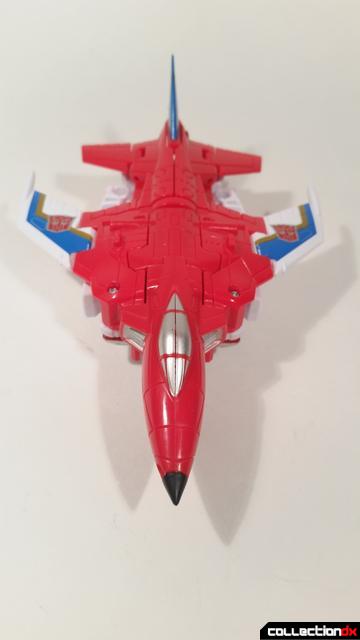 A view from underneath quickly shows off just how Firefly transforms. 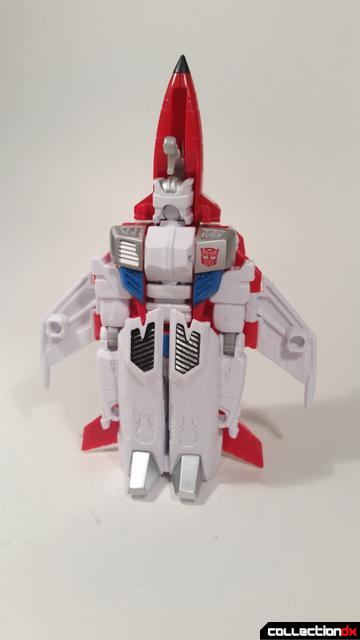 Firefly comes with two weapons: a blaster looking thing and a flame thrower! Both of these can be pegged underneath the wings, though it looks rather silly. 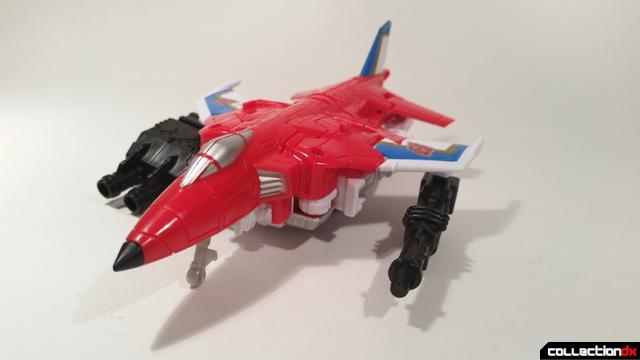 Transforming Firefly takes seconds, and the end result is a simple, but clean looking robot. Everything about him resembles his G1 counterpart, Fireflight between his white arms, angular faceplate, and pops of blue paint throughout his body. 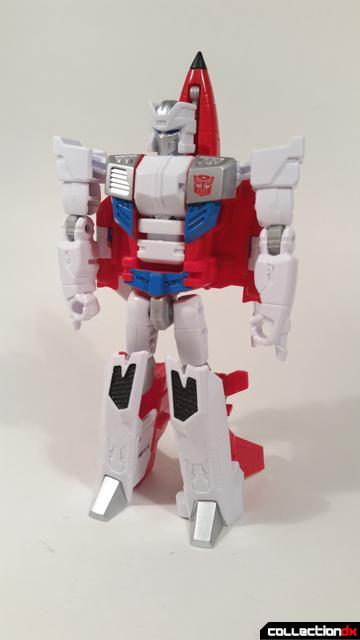 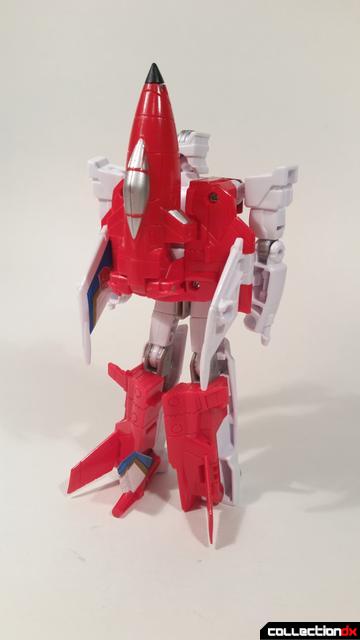 There's a very natural set of curves behind his sculpt that really makes him look good even just standing there. 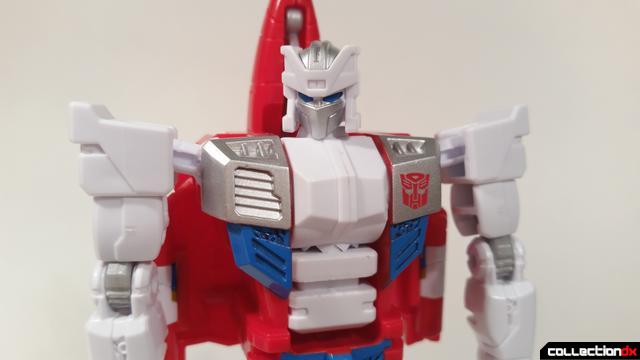 Firefly's range of articulation is very basic, but effective. He features posable elbows, knees, a waist, and thigh cuts. Nothing particularly fancy, but more than enough to get him into any dynamic pose you would like. 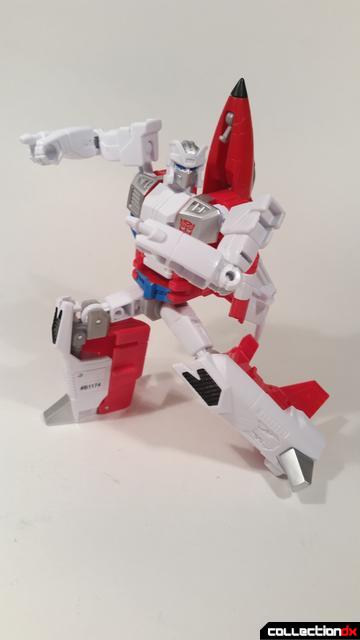 The flamethrower included looks much better in this mode, and makes Firefly look quite awesome. 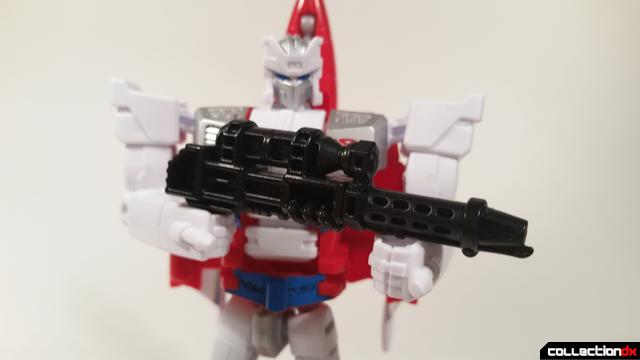 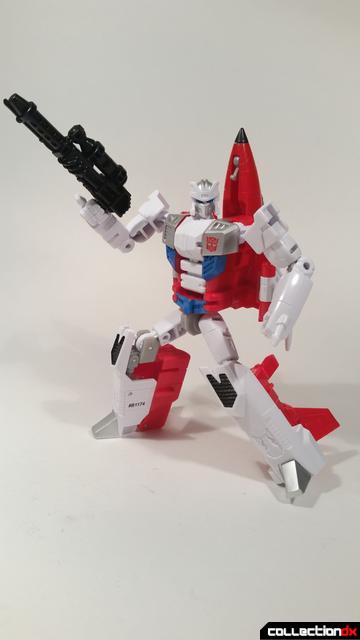 Also if you take a look at the inside of Firefly's thighs, you'll notice an odd little hole. You can actually use that hole to peg in any 3mm compatible stand which is great for flying poses. 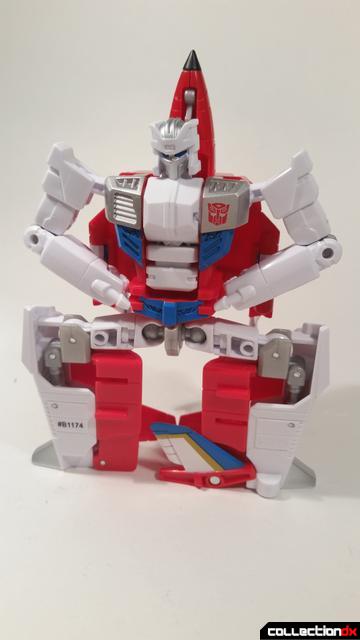 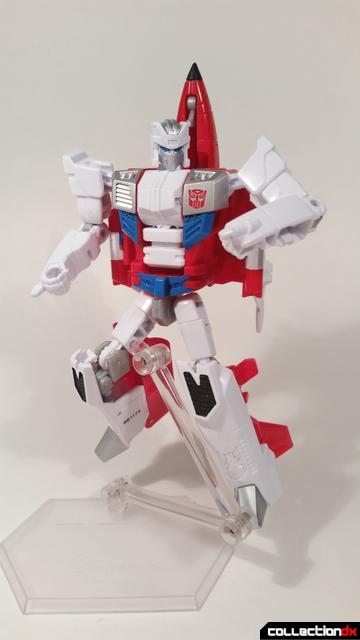 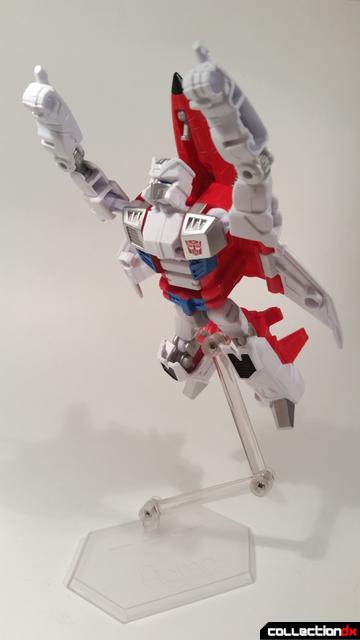 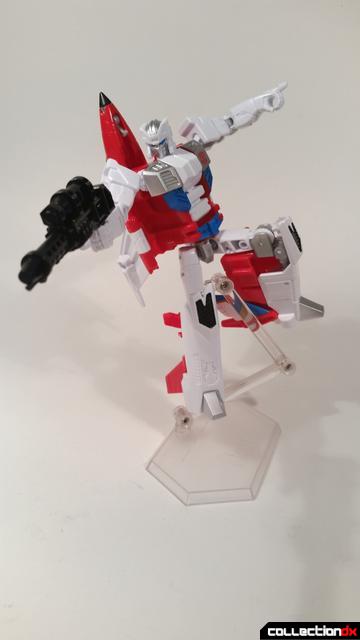 Although his other gun weapon is rather unwieldy, Firefly manages to make it work. 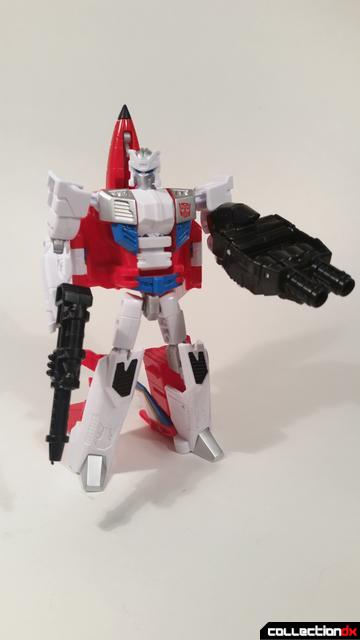 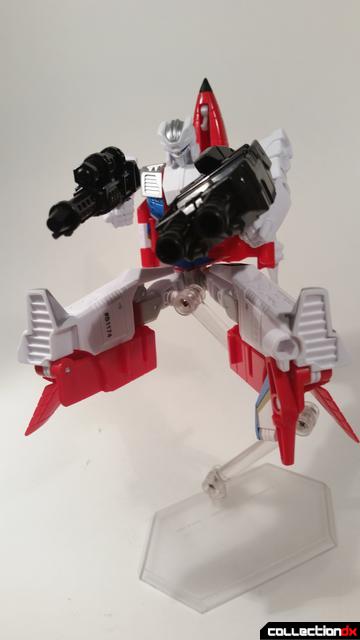 Of course as a Combiner Wars figure, Firefly also doubles as a limb. He makes a pretty good foot, but I think he's much better as an arm just given how the sculpt flows so naturally down the shoulder and into one solid looking forearm. 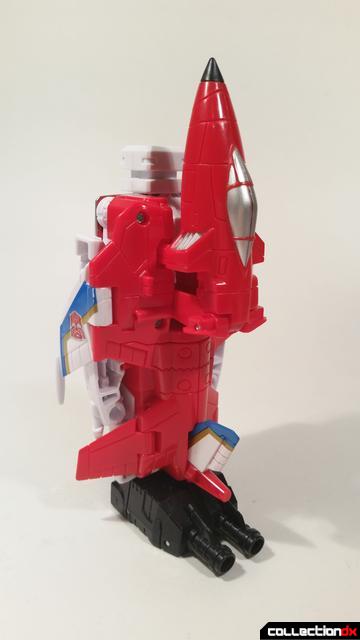 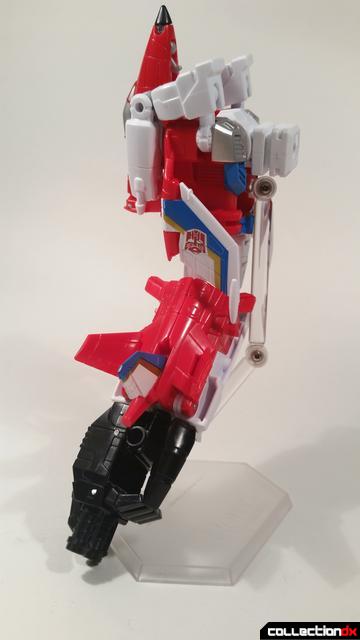 And that's all there is to Firefly. He looks mean, heroic, and knightly all at the same time. His sculpt is excellent and his limb modes are great as well. Out of wave 1, I think he's the one to definitely get.

Just think of him as Fireflyyyyyyyy...t.

I'm in a funny spot with these new Aerialbots.

One of my clearest childhood toy memories is getting the Aerialbots gift set for Christmas, and how thrilling it was to have a complete combiner team of jet planes (I was an aviation buff from as soon as I could talk). But it didn't take me long to realize that those original toys had some serious flaws. With the exception of Slingshot's arms, the transformation of all the smaller bots was basically identical. They all turned into realistic, identifiable jet fighters... that were clearly carrying folded-up robots underneath. And don't even get me started on the disaster that was G1 Silverbolt. So, while I have a huge nostalgic connection to this particular team, I also have to admit that they weren't great toys.

Now, along come these Generations versions, and they clearly improve on the originals in size, style, and articulation. Silverbolt is worlds better (although he remains an airliner in a team of warplanes), and I appreciate the variety that Alpha Bravo brings. But I can't help feeling that the smaller bots still have dull and largely identical transformations, and all of them except the new guy still become cool jets sitting atop giant, inexplicable boxes. It's as if the designers did too good a job of reproducing the originals, down to including their biggest flaws.

I also have a bone to pick with Mr. Fireflight in particular. While his G1 version was clearly inspired by the F-4, this "Firefly" fellow is a strange sort of futuristic Harrier design that seems to closely match RotF Dirge. Neat for what it is, but no surprise that it will be re-used as Slingshot, because it plainly is an updated Slingshot in everything but the head design and color scheme. This mold wasn't ever meant to be Fireflight!

So, yeah... I'm really excited that Hasbro is doing combiners again, and doing them pretty damn well from what I've seen. But somehow the new Aerialbots, which ought to be my most beloved team, are reminding me more about what I didn't like in the originals than what I did. I'm actually most curious about what we will see from "new" combiners, like Galvatronus.