Korean model kit manufacturer Academy released this 1/72 F4F-4 Wildcat model kit in the early 1980’s when they began to make inroads into the US model kit market. Over thirty years later this kit is still in their catalog as an inexpensive entry-level kit for young and old alike. How does Academy’s Wildcat kit stand up to the recent Hobby Boss and Hasegawa offerings? Read on! 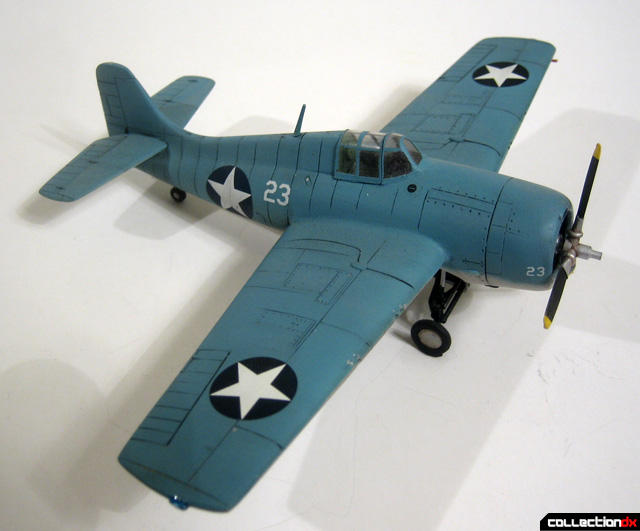 The Pilot
LCDR John S. Thach was an USN WWII fighter ace from VF-3 who served on both the USS Lexington and USS Yorktown and known for developing the flying combat maneuver called the Thach Weave. The Thach Weave was first used in early days of WWII against superior Japanese aircraft and has since become a standard fighter technique that is still being used and taught today as an aerial combat tactic.

After the war Thach became an expert on submarine warfare and was recognized with this achievements by being being on the cover and the subject of an article of Time magazine. Admiral Thach retired in 1967 and died in 1981. 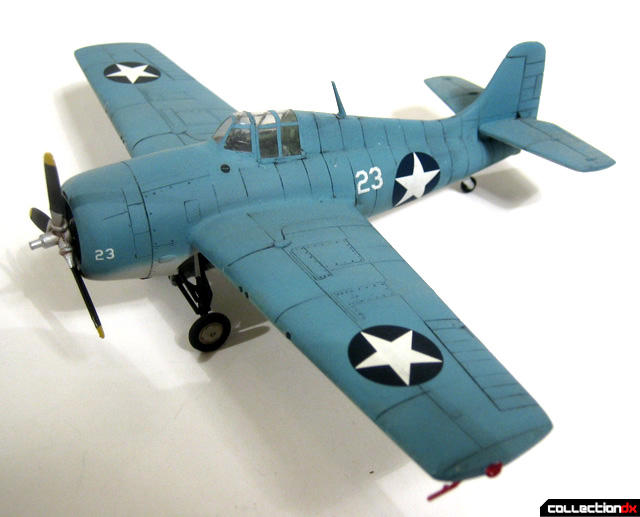 The Plane
The Grumann F4F-4 was the upgrade aircraft from the F4F-3, which included folding wings, 6 x30 cal machine guns, and a longer range to name a few changes. Overall it was one of those rare times when pilots preferred the earlier version of the aircraft due to the F4F-3 being lighter and armed with heavier firepower of 4x 50 cal machine guns. The F4F-4 was still a successful plane, being produced and used until the end of WWII and influencing the design of one of the most successful aircraft in the war, the Grumman Hellcat. Not bad for an aircraft whose origins began with a Navy bi-plane from the 1930’s! 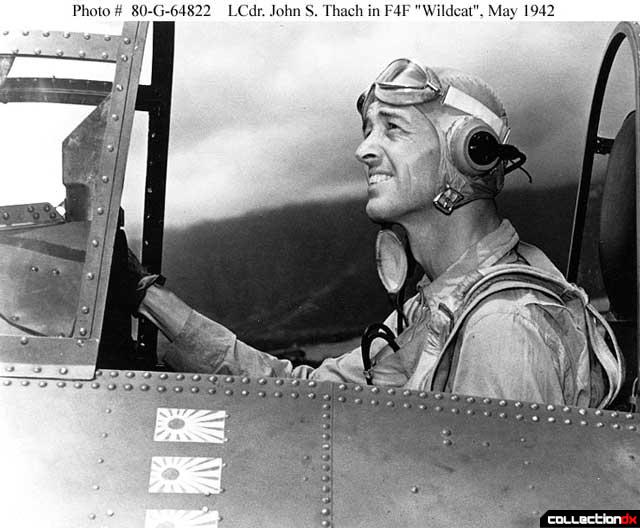 Although the model kit was very advanced for its day when it was released in the 1980’s, 30 years on it is showing its age. This kit still has a few things going for it, one is that it is widely available; the second is that it is very inexpensive purchase, and can easily be picked up for a few dollars from local hobby dealers or kit swap meets. 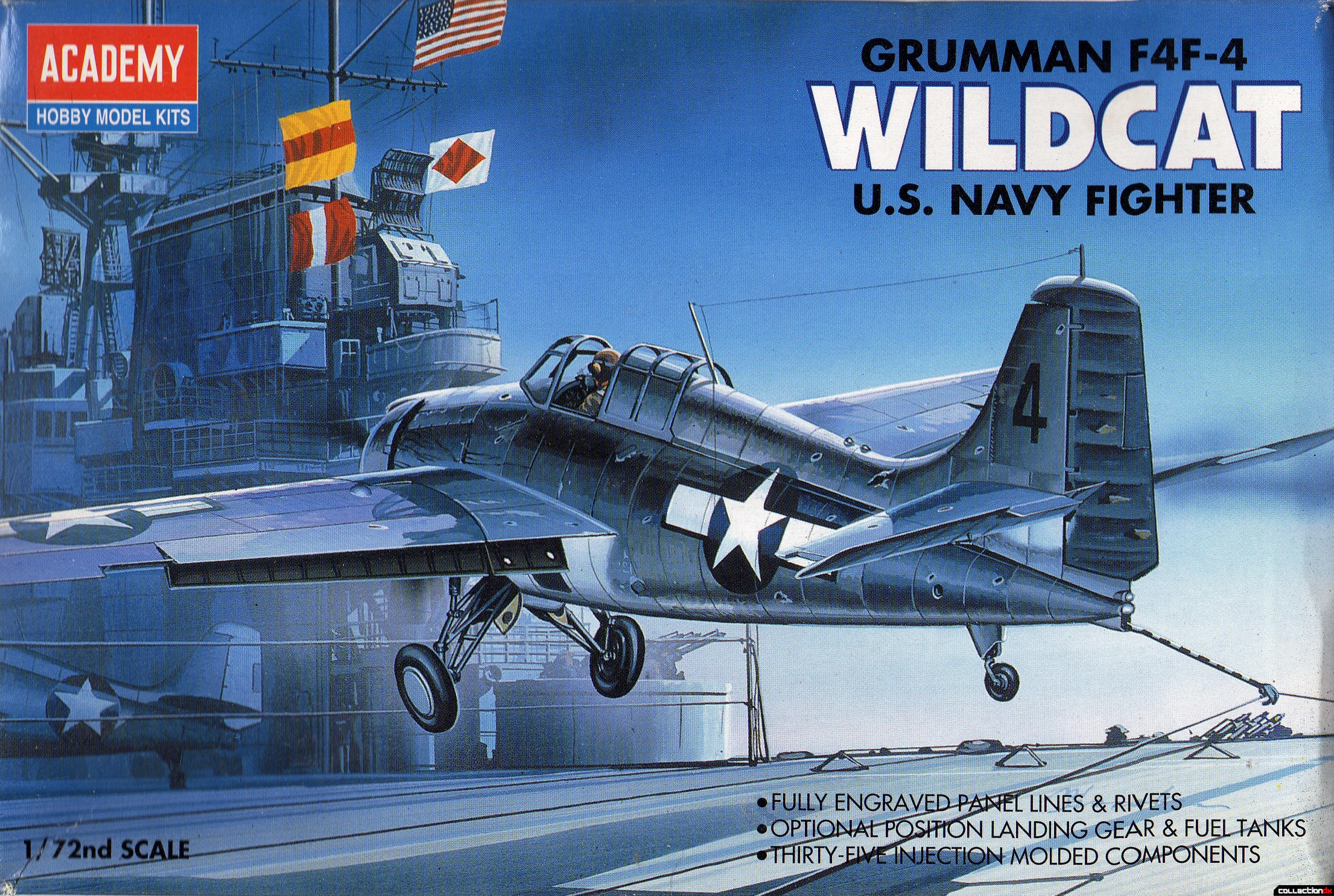 The kit comes boxed with two sprue, a clear sprue, a decal sheet and instructions. Following the business model of Hasegawa, sometime in the 90’s Academy moved away from their very drab and boring 1980’s box art to beautifully painted aviation art for the box top graphics of their kits. Academy upgraded the Wildcat box and glad they did as the current cover is a wonderful and dramatic painting of a Wildcat landing on an anonymous escort carrier. The markings that come with the kit are for a generic Wildcat based on an escort carrier with a late war Atlantic Scheme. Since I already build this kit as a kid with these markings I decided to build it as Thach’s Wildcat from the Battle of Midway. 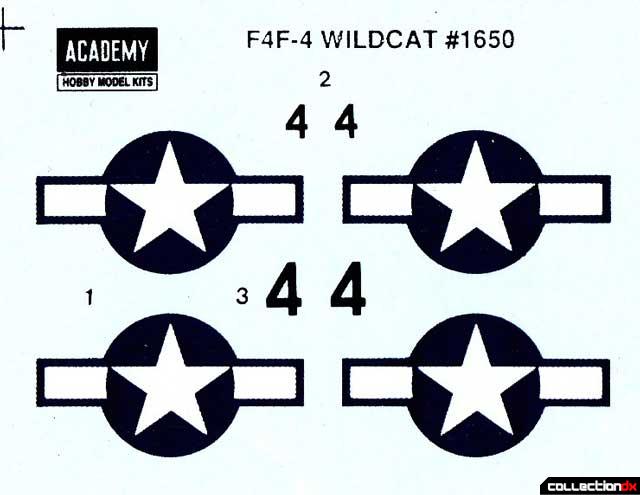 First the three negative aspects of this kit. This is a very basic build and what suffers the most is the interior and wheel wells. The interior consists of a seat glued to the bulkhead with a pilot on the seat. Basically you can see from the cockpit straight through to the landing gear. True Details makes an excellent resin addition for the cockpit and wheel wells but it is designed for the Hasegawa kit so it does not fit perfect but close enough to be used for this kit. 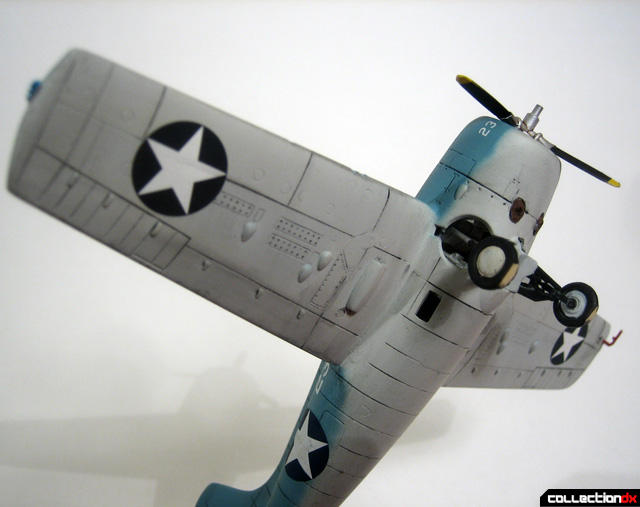 Second is the cockpit glass. The shape is nowhere close to what the Wildcat cockpit glazing is suppose to look like not to mention the large frames on the glass that are out of scale. A clear window aftermarket parts set by True Details, which greatly improves the look of the kit, should also replace the kit window. Even with purchasing these aftermarket parts, this kit can still be kept under the $10.00 range. 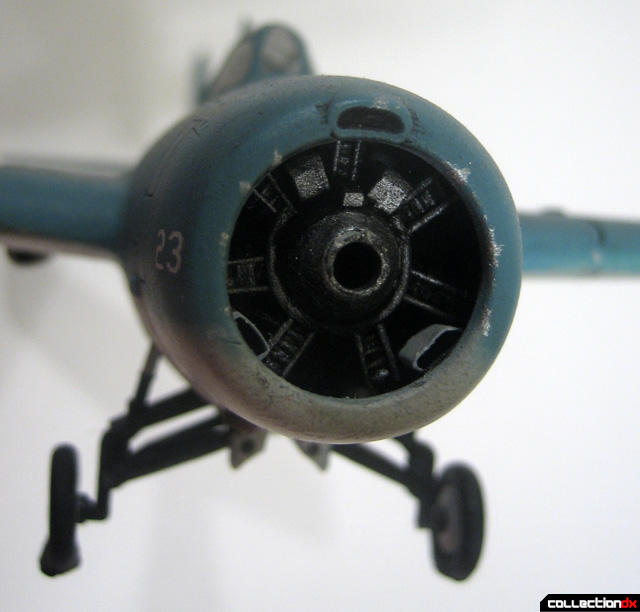 Finally the shape of the kit is a little off, the kit is a bit fat looking, especially in the forward fuselage area and the wing training edges. This is especially noticeable when compared to the Hasegawa and Hobby Boss kits. Although the other two problems can be easily fixed, this one cannot. This is just what the kit is. 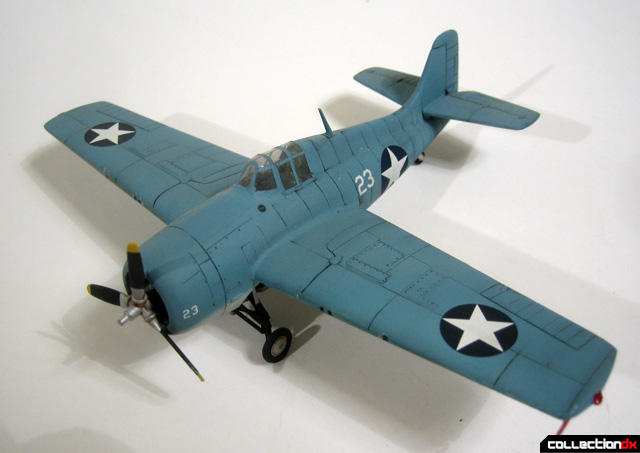 Some of the positives is that this kit come with some nice recessed panel lines, although a bit heavy and deep compared to Hasegawa and Hobby Boss Wildcat tooling. At the time this kit was released the kit having recessed panel lines was a bold and very forward thinking and innovative move for Academy because it was a feature many kit manufactures were mulling over at the time. 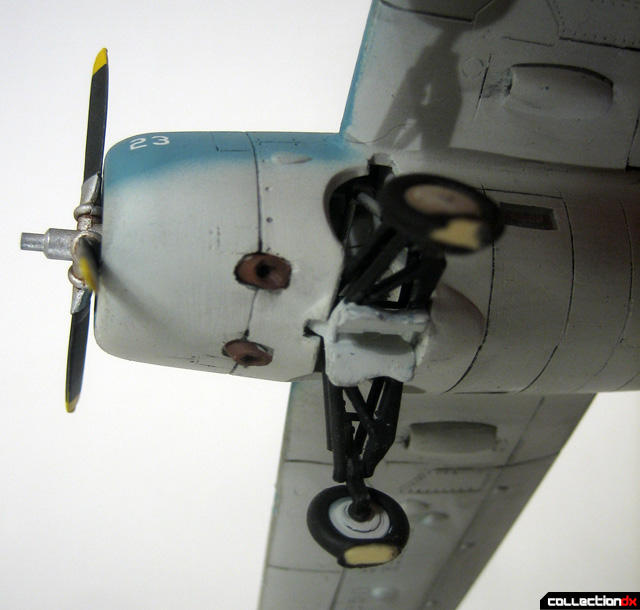 The kit is a reasonable build, nothing too difficult to build and the parts fit together nice. It might need some filler putty on the lower wing root but that was and still is a common issue with model kits today. Exhaust pipes need to be scratched built underneath the cowl, which is easily done with parts from my spare parts box. Also I replaced the landing gear wheels on this from True Details. The wheels that come with the kit are a little soft in detail but are perfectly usable. A tail hook and engine intakes should also be added to the aircraft. 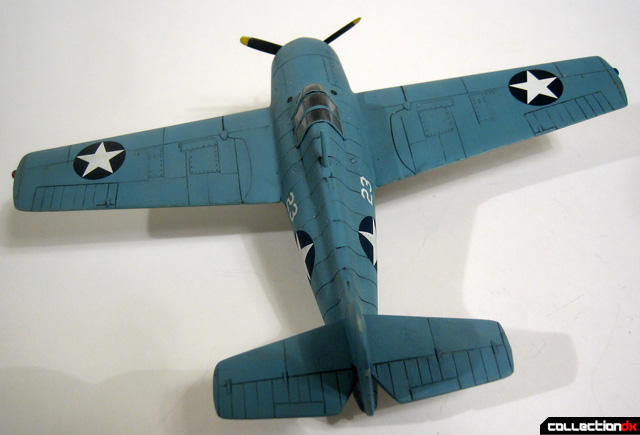 The Blue-Grey color used on this aircraft has always been a source of contention between historians and modelers alike. This Blue-Grey over light grey scheme was used only for about 10 months before it was changed. I used Humbrol for the Blue-Grey but I was not satisfied with the color tone of it. Since I made this kit, Testors released a matched Blue-Grey color in their Model Master line of enamel paints, which is what I used on my Hobby Boss kit. The Thach markings were assembled from my spare decal box.

So why build it? I build this as a kid back in the 80’s and I wanted to revisit it as an adult with my current modeling skills. I actually built this Wildcat four years ago but I am still satisfied with the results considering the limitations of the kit. Although this kit is not to the standards of Hobby Boss and Hasegawa, it still has its place in my collection. Due to availability and an inexpensive price point this is still a great starter kit for young modelers or inexperienced modeler who want to practice on a kit without empting the wallet. Advanced modelers would want to build the Hasegawa kit to get a better representation of the Wildcat. My only real issue is that I wish Academy would reissue this kit with new markings (the kit still has the same decal markings from when it was first released) and a corrected retooled window. If you see one of these Academy Wildcat kits, just pick it up and have a fun and guiltless model kit build.

©2013 photos and review by Leonardo Flores and CollectionDX

I'm happy to say I remembered what a Thach Weave is.

Very Cool, you know more about aviation that you lead on to be....

Well knowing is half the battle.