Okay, I know it's not usual for us to review two toys at once, but in the world of designer kaiju, exceptions ARE the rule! 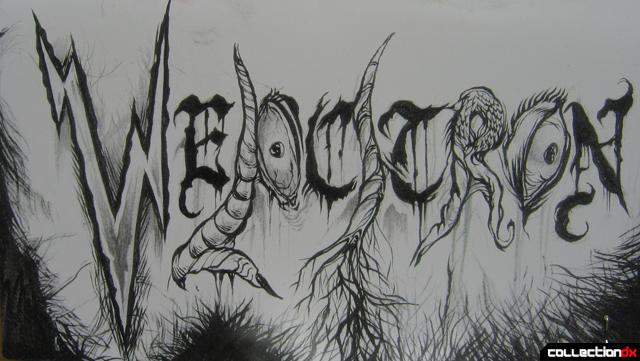 On this fine Halloween, I present two toys I've been dying to talk about for a while now: Velocitron's Bechigon and Larvagon in the "Emperor" colorway. These are two genuine Japanese slush-molded vinyl figures. These designer (non-character) toys are clearly horror-inspired--more specifically, a bit of a refinement on H.R. Giger's designs from the Alien films. 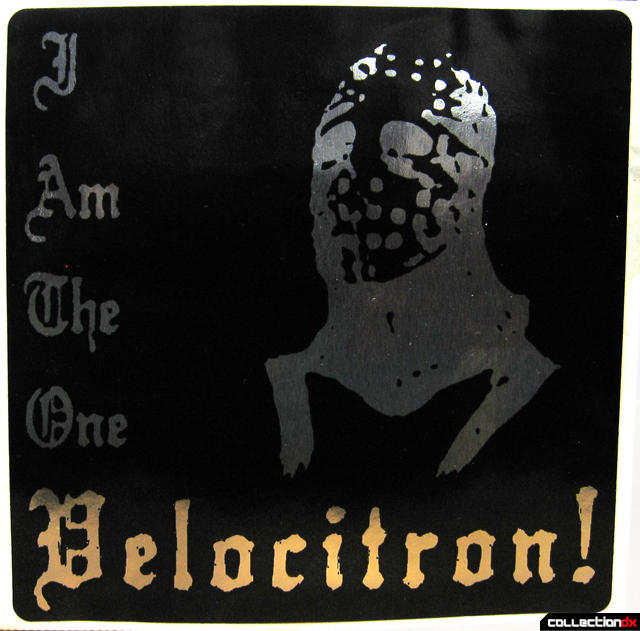 First up, we have Bechigon, Ricky "Velocitron" Wilson's first toy sculpt. They run around $35 each, and while each colorway is pretty short in terms of run size, there are lots of 'em and they ALL look great! Just check out the various pics in Velocitron's flickr. 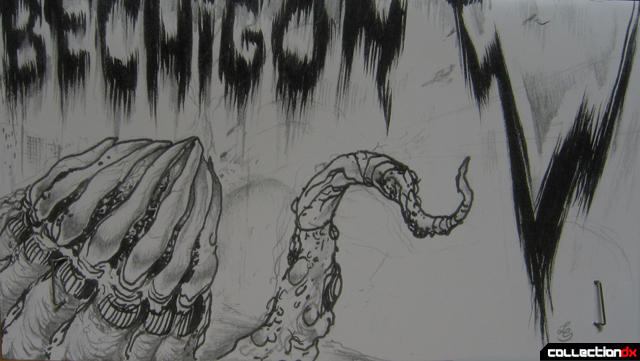 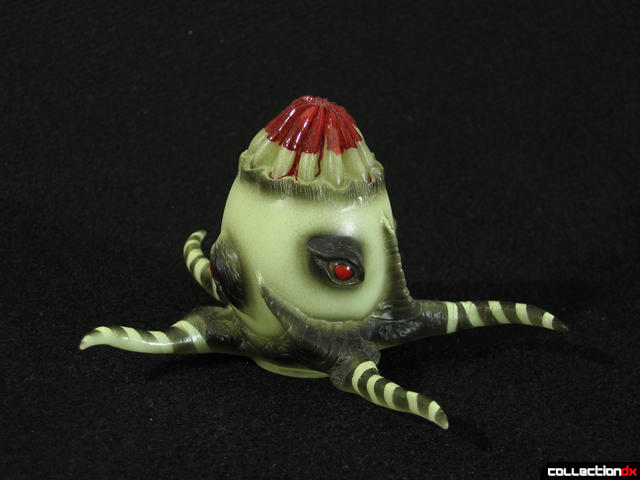 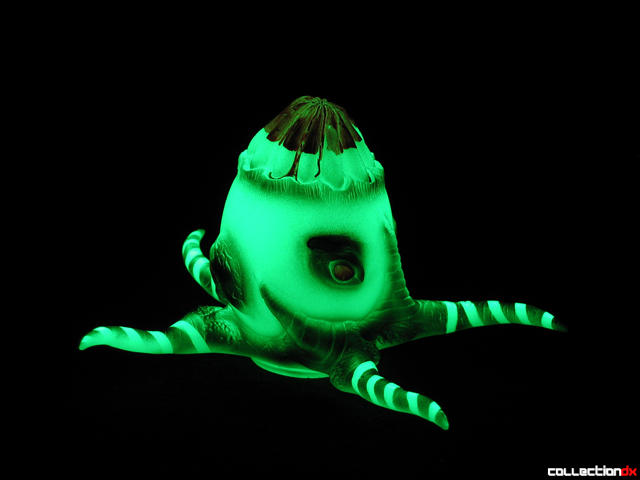 Bechigon is very reminiscent of the face-hugger pods from Alien, but it seems more like closed fangs at the top rather than an opening for something to hatch. Also, the added tentacles are fantastic. I picked up this particular colorway of Bechigon when it first came out because it was one of the first shot in glow vinyl and because it just looks so cool. The black spray and the spiral masking on the tentacles is brilliantly executed. Also, the gloss red handpaints are a striking accent. This thing looks sick!

I mean, just check out how cool the tentacles look when they're glowing! 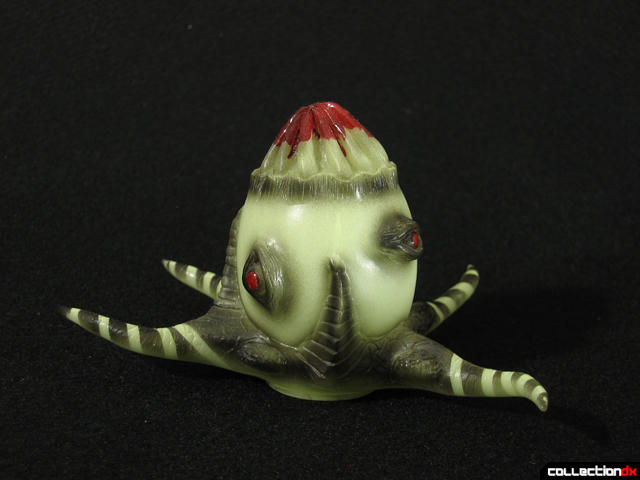 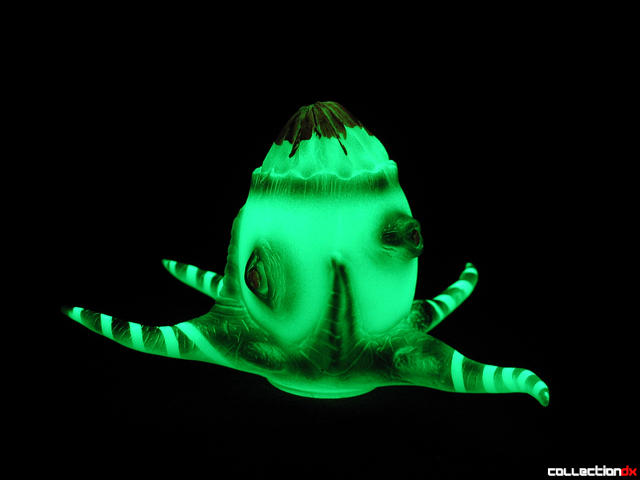 Bechigon's tagline was "Egg of the Apocalypse". So what gives? Why would a budding designer vinyl maker start off with an egg...rather than a full-size (ostensibly adult) monster?? Well, Ricky has said that he wanted to create a sort of progression with this toy line. So, start with an egg...then move on to a larva (hint, hint)...and then...

I sorta compare it to the different vinyl makers who release Hedorah toys depicting his different life-cycle forms (larva/tadpole, crawling, flying, adult, etc.). Anyway, clearly, these toys are designed to complement each other when displayed on a shelf. So, I assume that the next in the series will be an adolescent or young adult monster...but I'm getting ahead of myself... 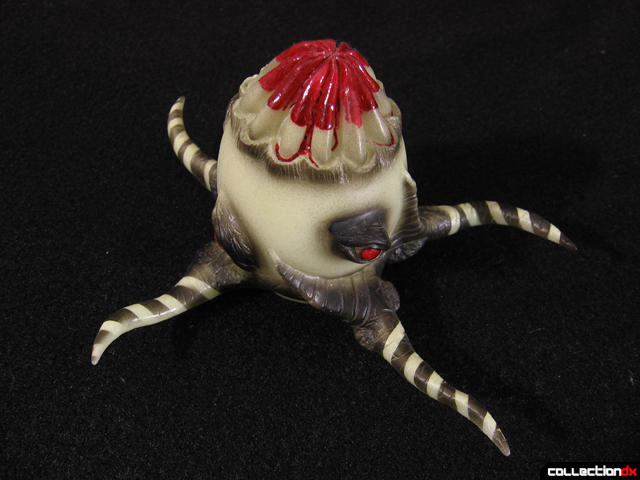 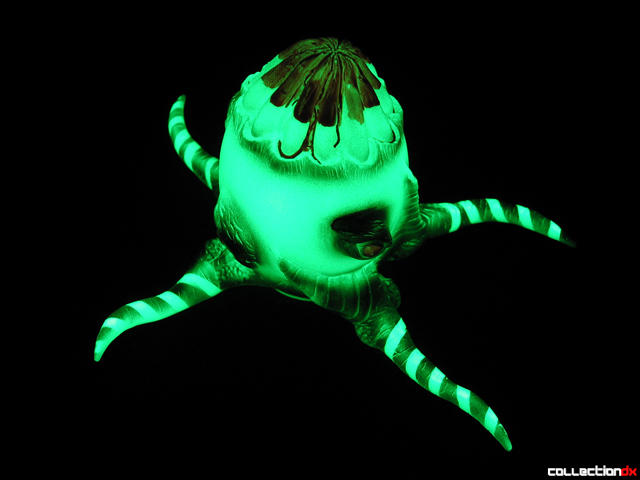 After Bechigon, Ricky released the much-anticipated Larvagon. They retail for around $55. I think of Larvagon as a cross between Giger's face-hugger and the chest-burster designs. Only giant! Well, they're Japanese, so I imagine them being giant! :P 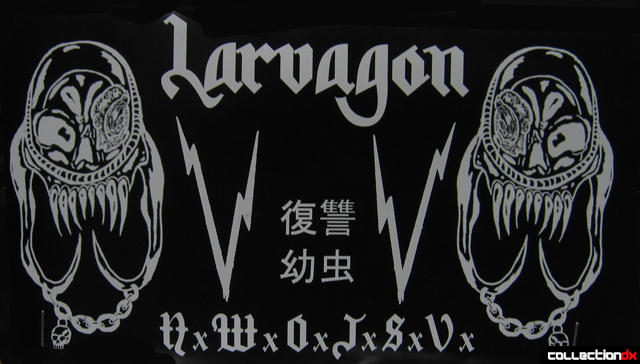 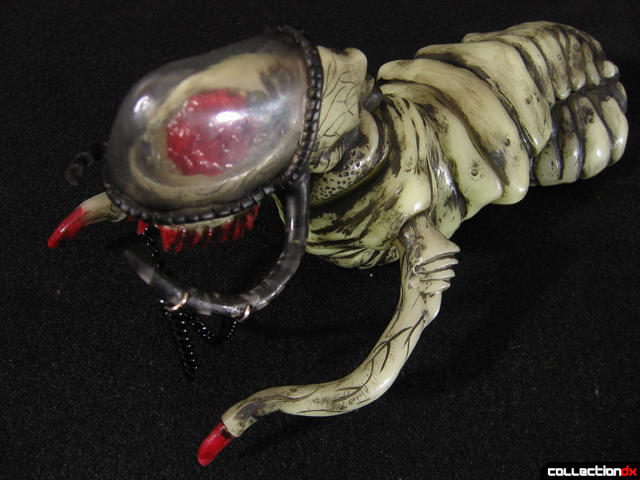 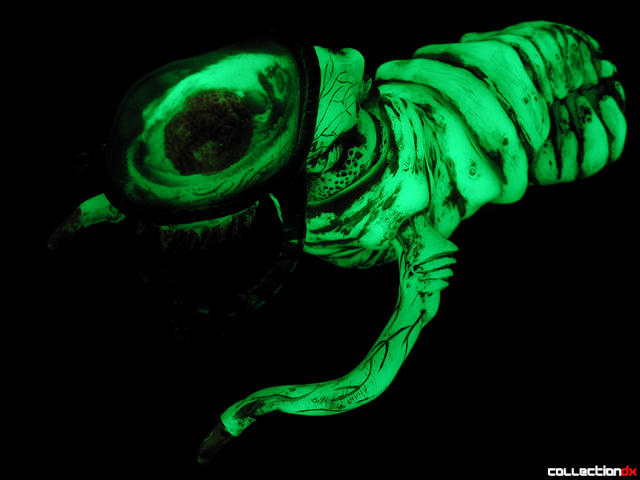 Now this damn thing is metal as all hell! I mean, it's grotesquely detailed and monstrous...but it's still just a silly glow kaiju toy. For some reason, I feel like blasting Dethklok while playing with it! ;) 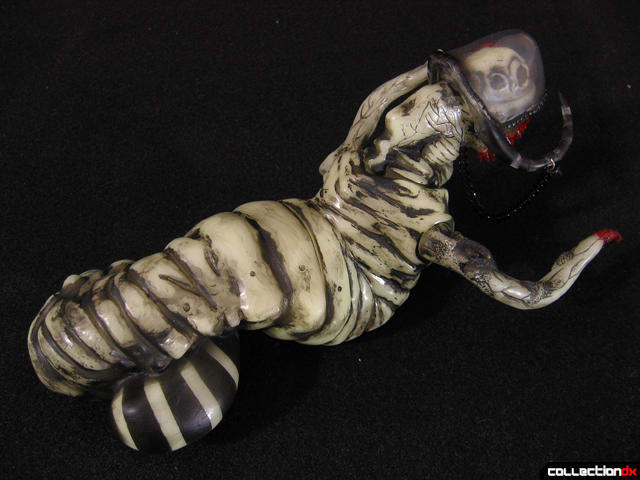 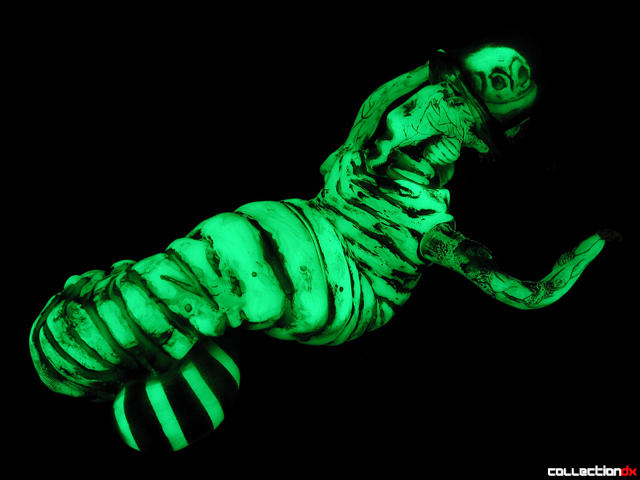 I love how Ricky carried over the Emperor theme into Larvagon. The striped black look has been preserved, and the black paint rub over much of the body accentuates the detail of the sculpt perfectly. [By the way, I have no idea what "Emperor" is supposed to indicate. That's just the name of this colorway. Maybe there is a whole race of these monsters...and this is their leader!] 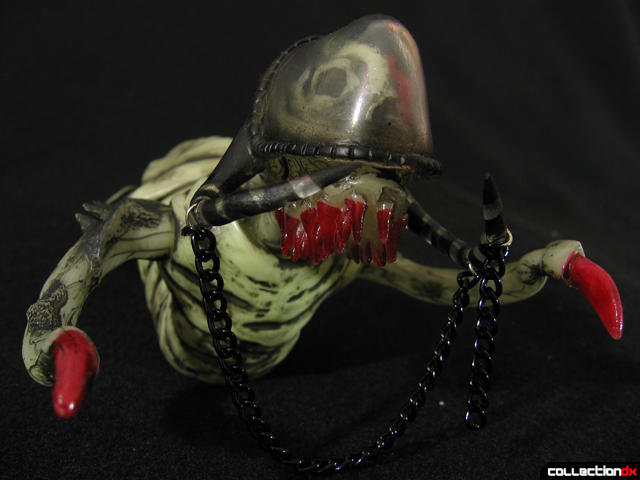 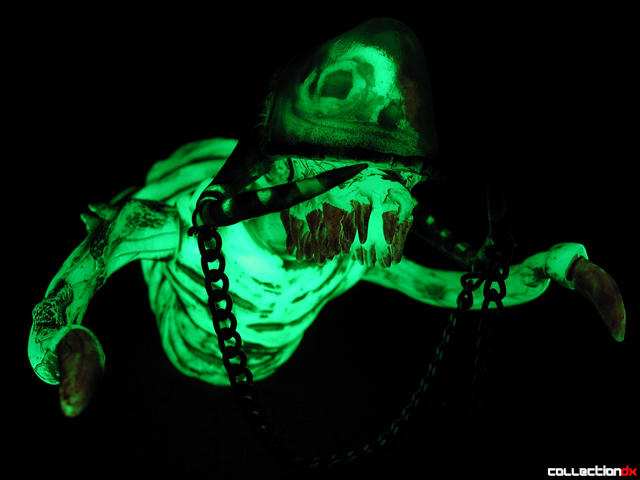 There are a few neat things about this sculpt. Well, first, it features a whopping two points of articulation! Yep, just those red-clawed tentacles can move. Hey, works for me! Also, there's a sweet removable carapace shot in clear vinyl that fits on top of the head. This is TOTALLY reminiscent of some notable Alien xenomorph toys like the classic 18" Kenner Alien, which had a glow skull underneath a smoky clear cap. Larvagon's carapace has two tusks with a groovy black chain connecting them. 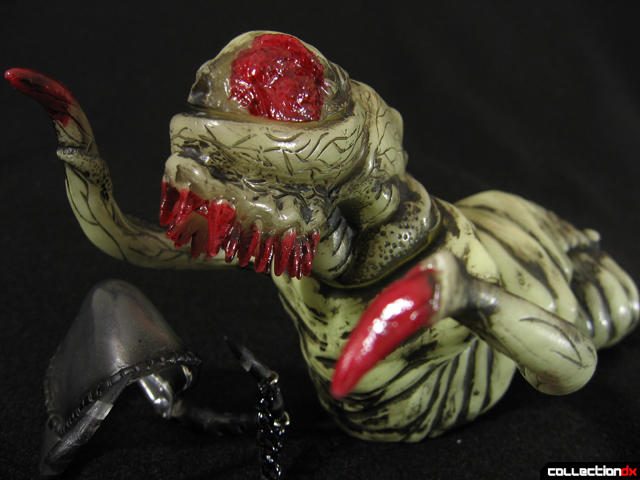 Yo, what's up with the red wad that looks like a mashed strawberry on the left side of his head!? :P 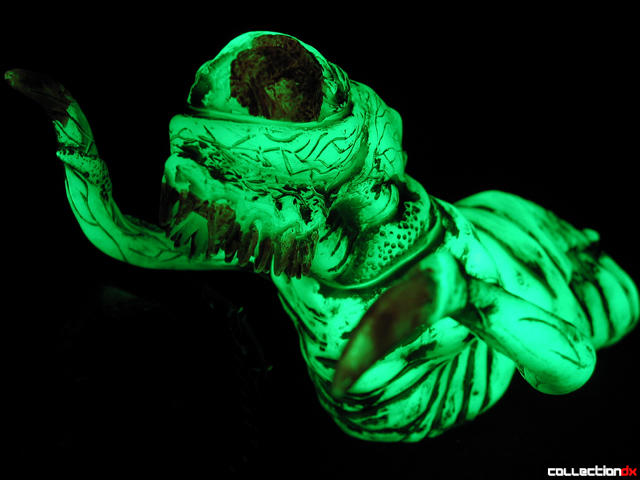 Anyway, not much else to say about these guys. Their beauty--or lack thereof!--speaks for itself. While I think these toys are absolutely great, I can definitely see how your mileage may vary. Designer vinyl, in and of itself, is an acquired taste. I, for one, am looking forward to future releases in this line and completing an Emperor set!

If you're interested in picking some of these toys up, go to skullbrain.org and do search for "Bechigon" or "Larvagon"...you'll find info on how to get in touch with Ricky, get on his mailing list, and see what's in stock...not to mention finding TONS of great pics of other colorways of these toys! 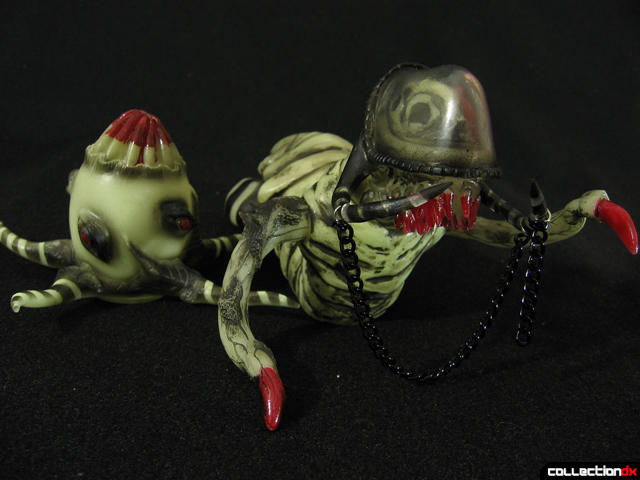 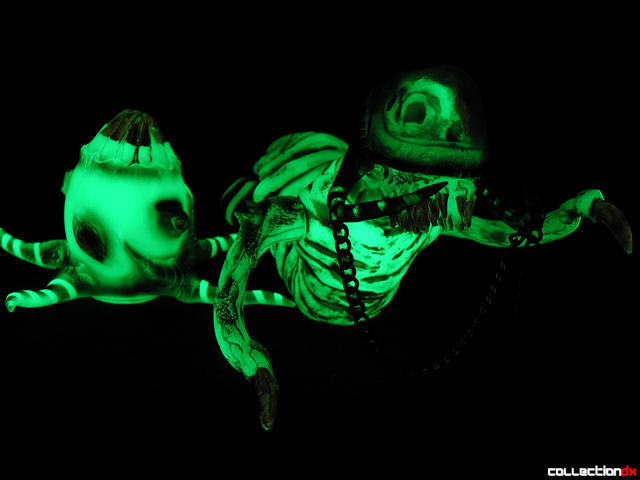 7 comments posted
I have to say I like the

I have to say I like the design of these guys a lot. Something about their aesthetic doesn't really strike me as Kaiju, but I still love it. Especially Larvagon. It looks like something that would pop out of Eternal Darkness! I really want to see these other supposed forms that will come out.

True, it's kinda weird to think of these as "kaiju", per se. I guess by definition they are mystical beasts...but not in the traditional aesthetic sense of Japanese daikaiju. These seem a lot more Western...which I guess makes sense because Ricky *is* a white dude!

Still, in your hands, these sure beat the quality of ANY Spawn toy ever. They definitely feel like something from the depths of hell!

I liked the Hawaiian (?) version in the flickr link. Very sweet!

This Ricky cat is doing some cool stuff. I get the sense that he's undertaking much of the production himself, which renders more validity to the position on toys as art.

Agreed. If I were to come up with a list of toy makers I'd consider true artists, Ricky would definitely be up there. I've always had sorta mixed feelings about the topic, though: I'm a toy collector, not an art collector, so these things *have* to appeal to me as toys, first and foremost. Once that's satisfied, if they also carry a strong "artistic" aesthetic, so much the better.

But if a thing is more "art" than "toy", it won't impress me. I know these are really vague and highly subjective terms, but that's what I think about it...

On the other hand, there is Sucklord, who I believe is creating the type of "art" that evokes "toy" more so than most of the current toy offerings. His stuff is definitely not toys, but you can't deny it's appeal as such. I get a similar vibe from Velocitron, although he is clearly making toys. His toys cry "art" more than most art I see these days.

I agree with the general consensus on Designer toys around hear. That stuff has nothing to do with art, they're just collectibles. Occasionally these collectibles are customized within the context of being art, at which point the object ceases to be a toy, yet a bunch of people (without much knowledge of toys) keep talking about it like it is.

Our annoyance is justifiable.

Yeah, I agree that Sucklord's stuff is like toy-ish art...and you could say that Velocitron's stuff is like art-ish toys! I guess what I like about both is that the work they do is VERY clever and it's devoid of any pretense about the stuff being any more important than it really is. This stuff we collect is generally crap to 99% of the human population! ;)

Indeed! Sometimes when I look at my toy collection, I have to question my sanity.