Two for the price of one? Sort of.

Eligor and Gomory are part of the second wave of Vitruvian H.A.C.K.S. figures from Boss Fight Studios. It's one action figure with two heads, so depending on which parts you use, you get a different figure. It's a clever idea. Adding to that is the H.A.C.K.S. interchangeable joint system, which allows you to mix and match limbs and accessories amongst other figures in the line.

Special thanks to Boss Fight for this sample. You can get yours here.

The first thing I have to talk about is the collector-friendly packaging. The backing card is held in place with clear tabs, and the card can be removed and replaced without destroying any packaging. 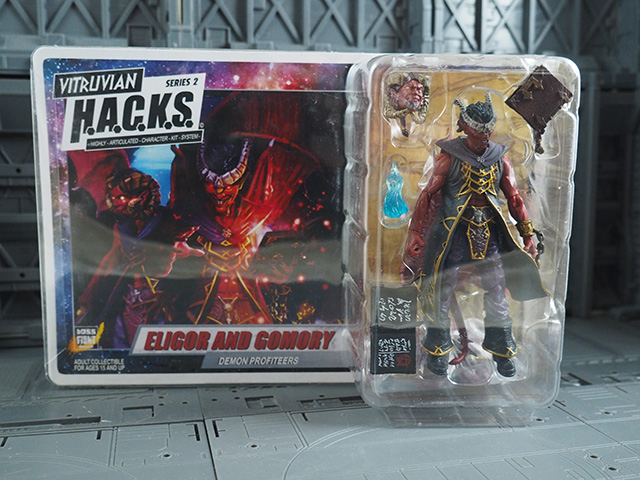 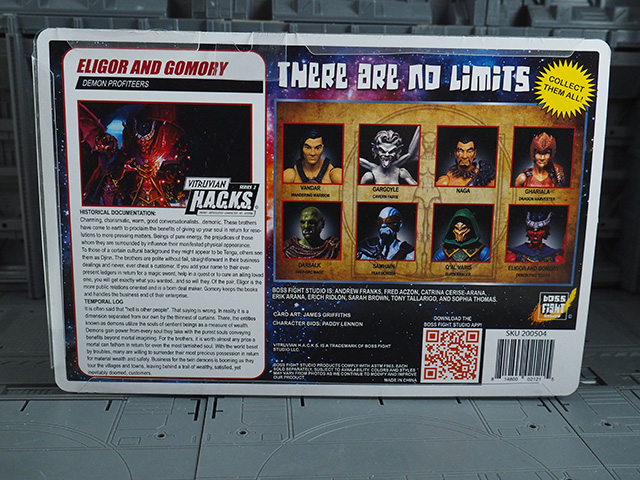 I don't know the backstory of this world, but Boss Fight describes it as such:

"Across a new world, the battle for the ages continues to rage. New allies come to the aid of the embattled, while nefarious creatures stalk the shadows.

Valiant knights stride across the land. Elves stalk the woodland realms. Magic is shaped and shifted into powerful spells and creatures. Dragons cut through the sky bringing fear and awe, and always, the war drums of the Orc conquerors beat.

Take up sword and shield, bow and arrow, or spell and staff and relive the gruesome conflict with the fantasy figures from Series 2, then use the amazing H.A.C.K.S. system to mix, match and make your own! " 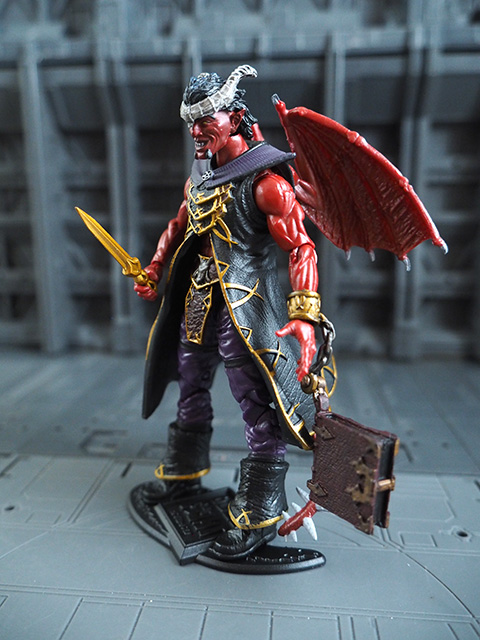 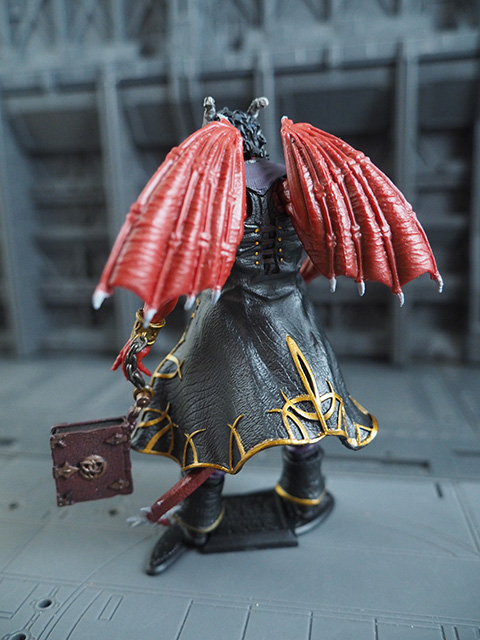 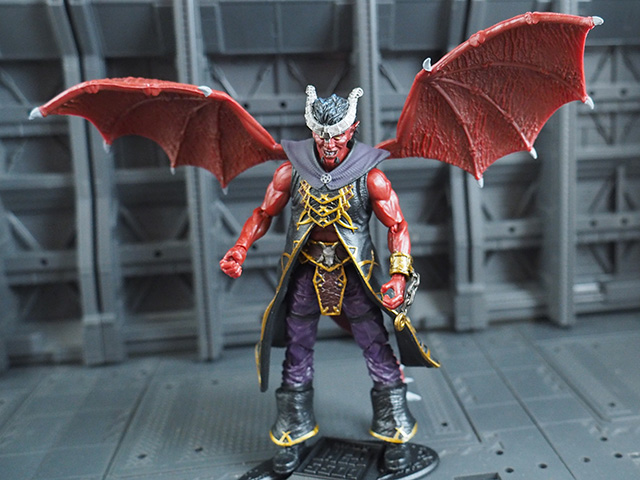 There's a lot of cool stuff included with the toy:

I found attaching the wings difficult due to the extra depth created by the jacket overlay. Once you get them in they should be stable, it just takes a bit of work. 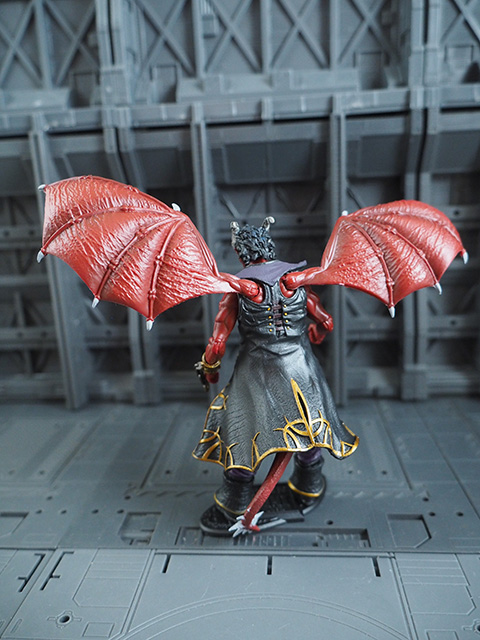 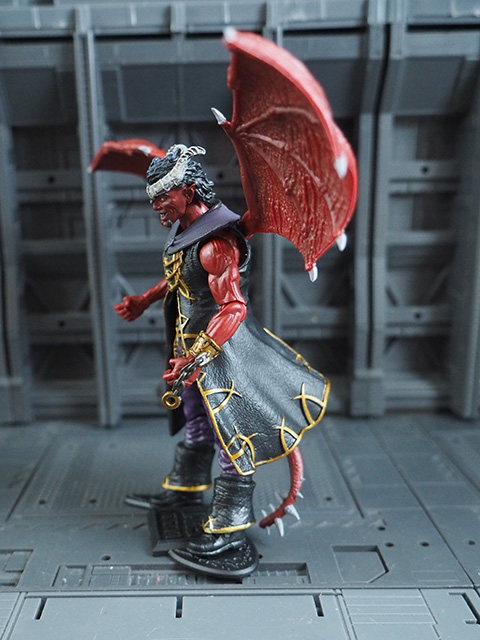 Each limb pegs in with a unified system. The shoulders are ball joints, the elbows are hinge joints that rotate, and each hand joint as some measure of articulation. The cuff around the wrist is removable. It's supposed to connect to the closed book at the loop, but I didn't figure that out until later. 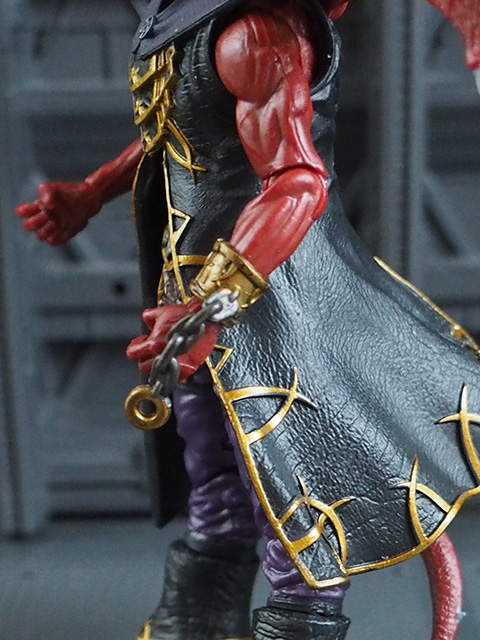 The detail in the figure is spectacular. Every bit has a great texture and sharp paint application. 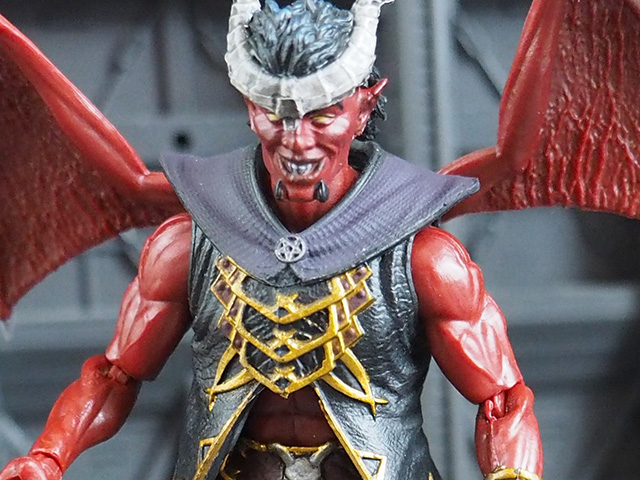 The two golden daggers can be held in either of the grasping hands. However there appears to not be any place to store them on the figure when not in use. There are straps on the side of the legs that you could possibly insert them into if you want. 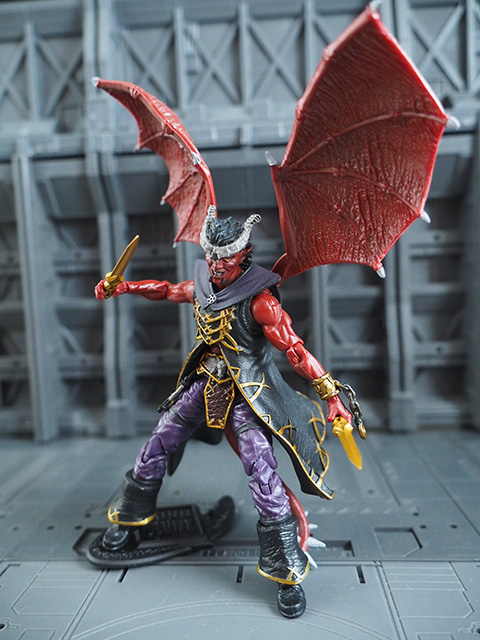 I have mixed feelings about the Boss Fight Stand. It looks great and is wonderfully stylized, but the raised logo part makes it difficult to have any other foot position than straight ahead.  With this particular figure, the wings make the figure top heavy, and the stand is a bit narrow, so it doesn't support the figure as much as it should I think. 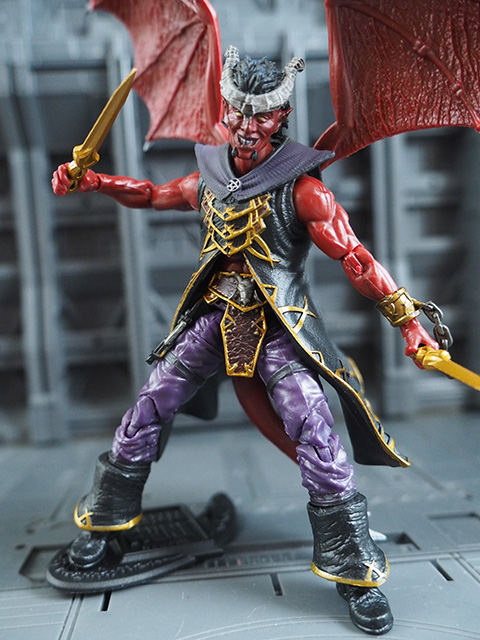 The legs have ball joint hips, double jointed knees and hinge joint feet. The cuffs of the legs prohibit you from doing a lot with the feet sadly. You can't point the toes up for example. Still, it looks cool. 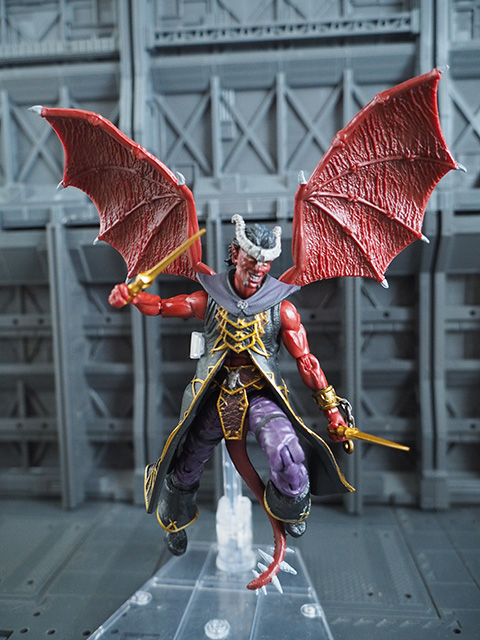 I ended up using a Tamashii Stand to get a few more dynamic poses out of the figure. 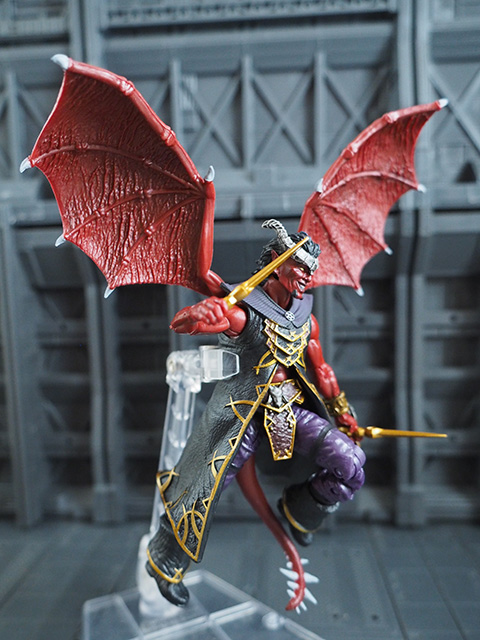 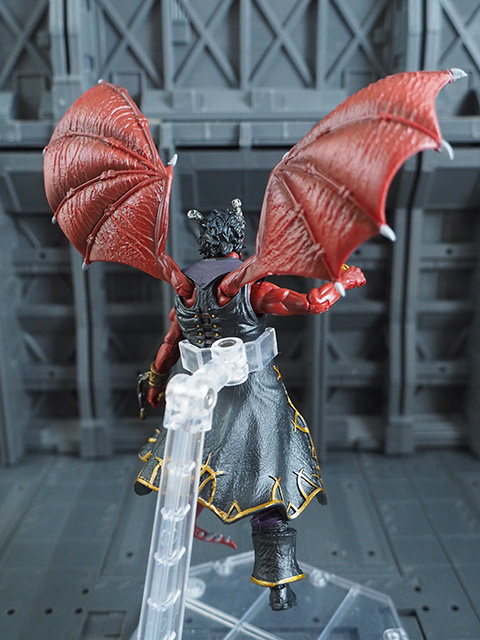 The blue flame effect is meant to work with the book, but you can use it as a stand-alone. You can also see here the smaller wings swapped out. 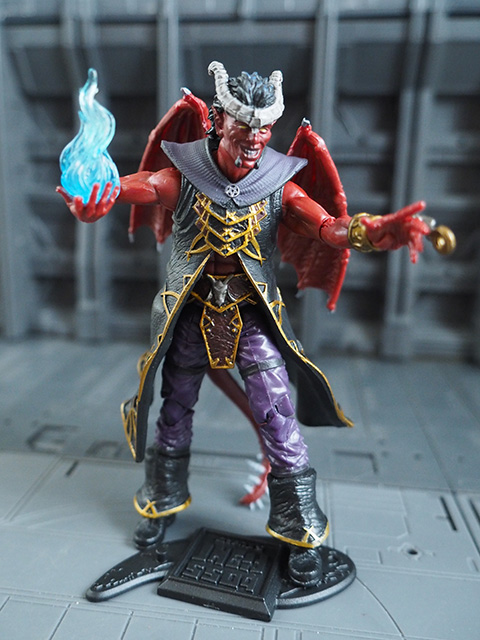 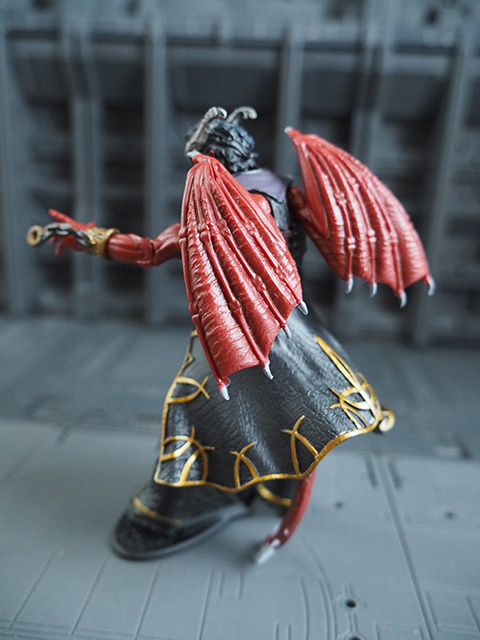 When swapping the head, I tried to see how different I could make the figure, and I decided to try and remove the overcoat. You have to remove the head and arms to do it, but it is possible. Without the overcoat, the wings are much easier to insert. It was during this process I discovered that the tail is actually attached to the back of the belt, and not the figure itself. It can pop off easily if you don't understand how it connects. 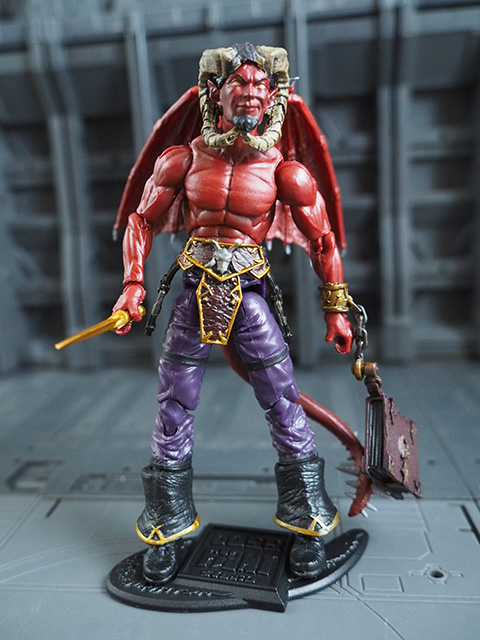 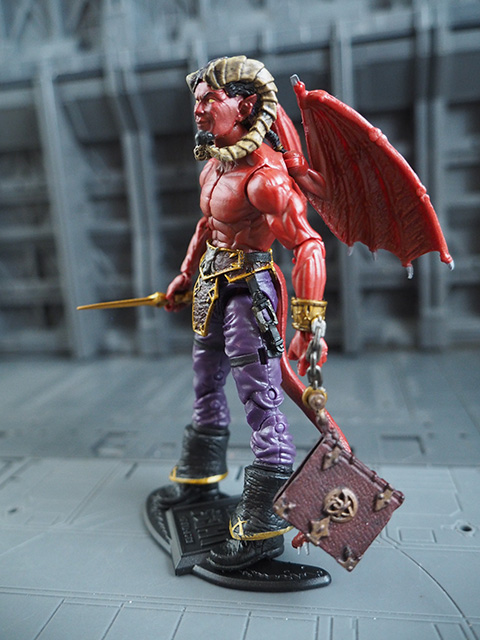 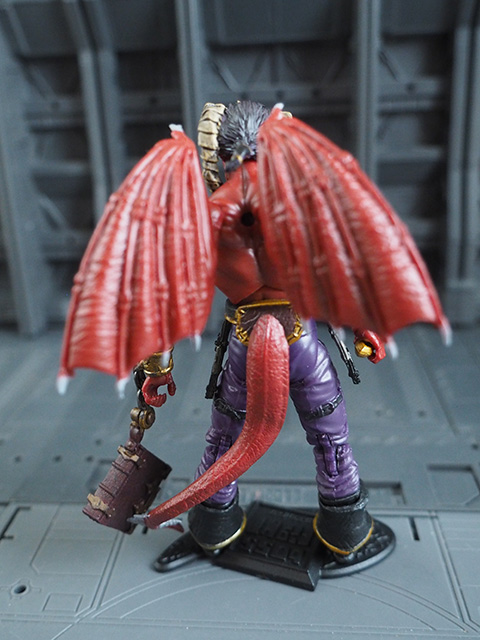 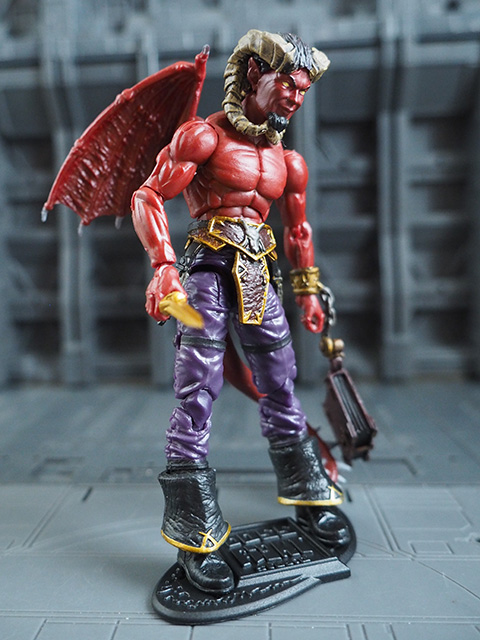 Here you can see the opened spellbook. There's a peg in the middle that you can attach the blue flame to. It's a cool effect. 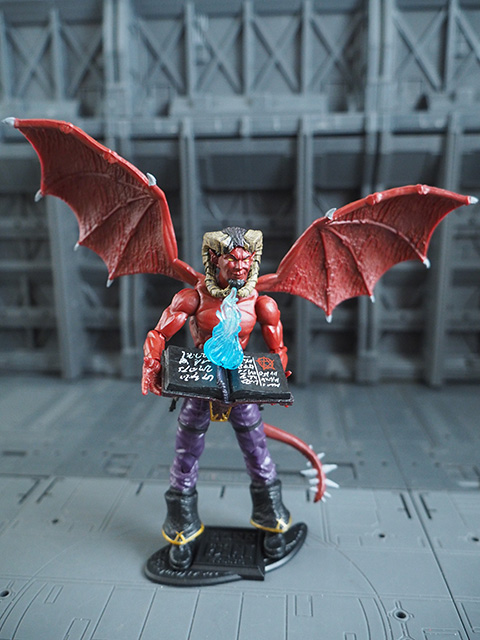 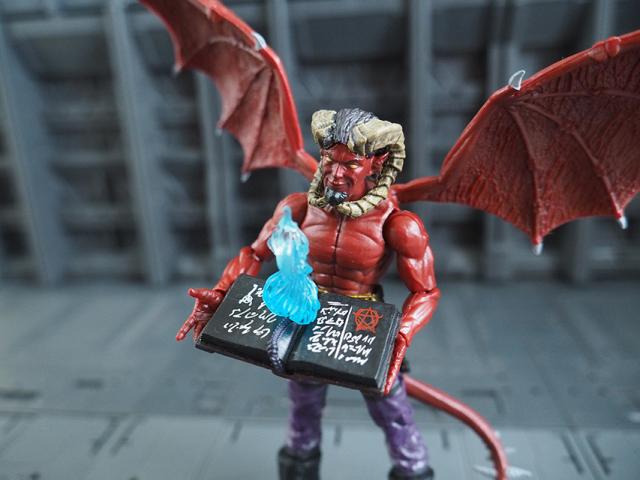 As an action figure, I like it better without the coat. It gives you greater freedom of movement. 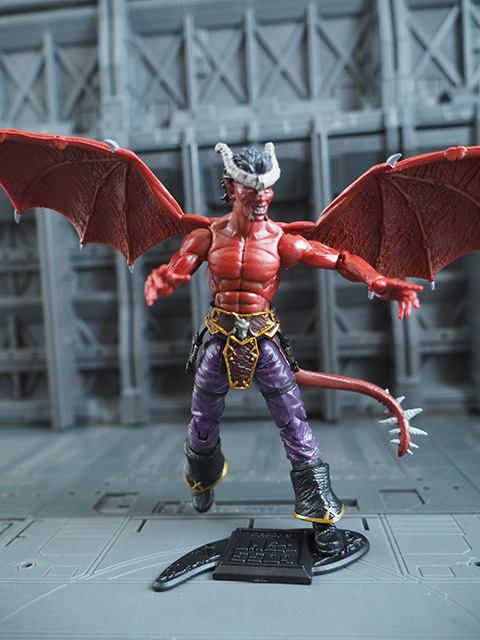 Boss Fight is a small, independent toy company out of Massachusetts, and it's amazing that such a figure can be made by such a company. It's really well made, and the detail is fantastic. I had a few issues when I first started messing with this figure because I didn't really "understand" it. But as I figured out what things went where and I got used to the tolerances and movement it actually became a really solid figure. I know it's an odd way to explain it, but trust me, it's a lot of fun.

You can order your Eligor and Gomory figure now at the Boss Fight Studios store. 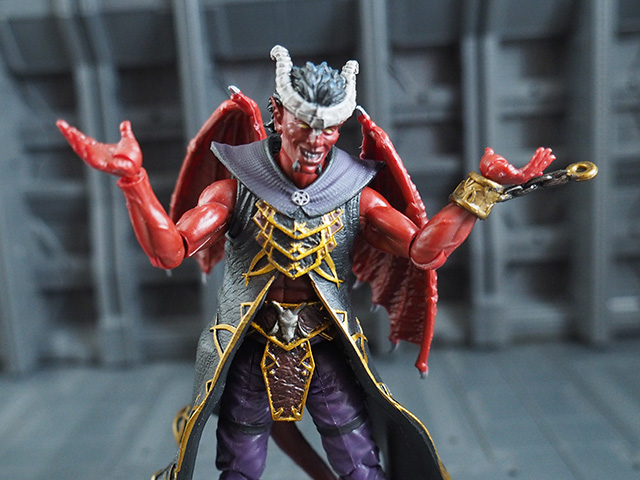