Out of the original Stunticon cars, Dragstrip was the most striking with his bright yellow body and race car alternate mode. Combiner Wars has brought this fan favorite Decepticon back while keeping the spirit of the original toy. 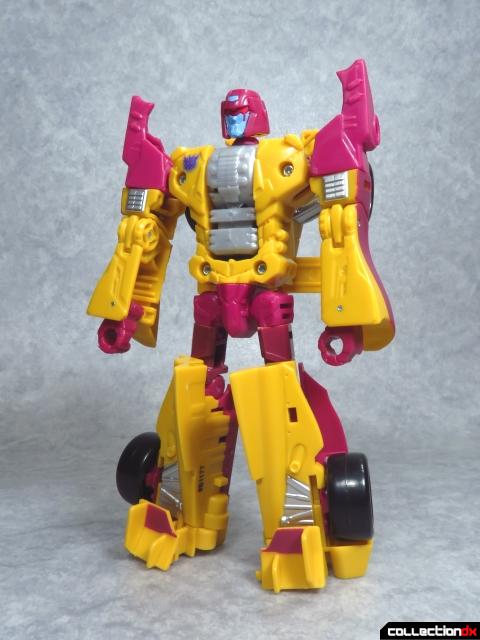 Dragstrip has the honor of being the first Decepticon combiner member released as part of this new line of Transformers. In fact, he effectively took the place of Aerialbot Air Raid in the first wave of figures to the point where even instructions for building Superion included Dragstrip. Make no mistake though, this guy is bad to the bonnet. Dragstrip stands five and a half inches tall and is a sturdy all plastic figure. 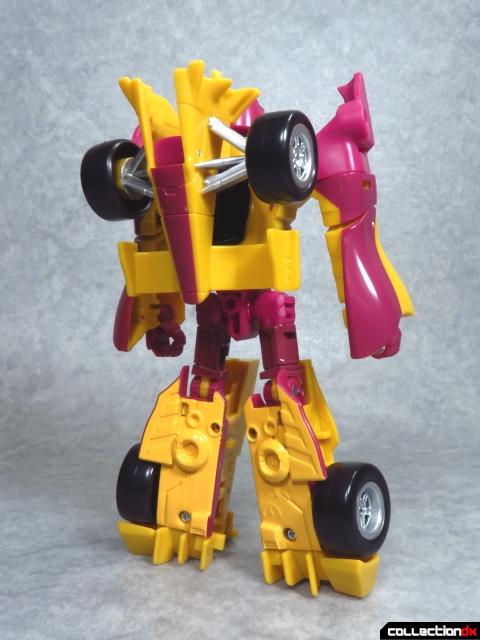 Design wise, Dragstrip isn't anything we haven't seen before but is a well executed update on the classic Scramble City combiner limb. Even the front of a Formula One car being on his back is pretty accurate to the original. 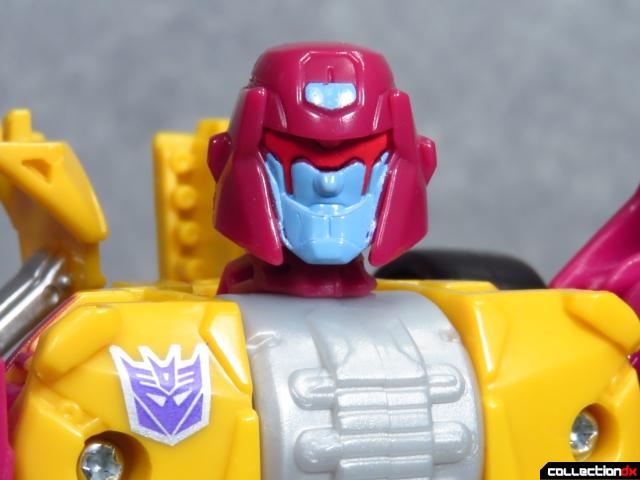 His head is an interesting take on the G1 design, with the red visor seen in the cartoon gaining a pair of "bloody tears," making Dragstrip's gaze a bit more severe. In the middle of his face is a relatively small pair of lips positioned above a huge "chin guard." I think the idea was to give this notorious evil racer a helmet akin to the Stig. His head is on a ball-joint so Dragstrip can look all around. Although, on my toy the neck is a bit too tight. Despite that, moving it hasn't produced any stress marks that I can see. Also note that the combiner joint is styled like the top of an engine block, which recalls the way Dragstrip's G1 toy transformed. 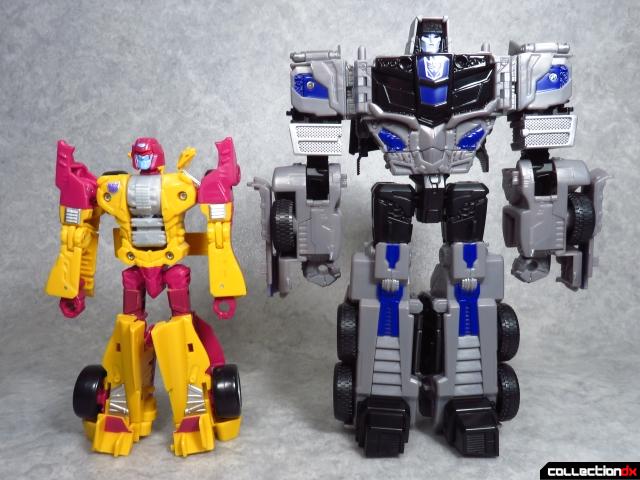 Here is Dragstrip alongside Stunticon leader, Motormaster. The pecking order in the Decepticon ranks is nicely represented by their relative sizes. 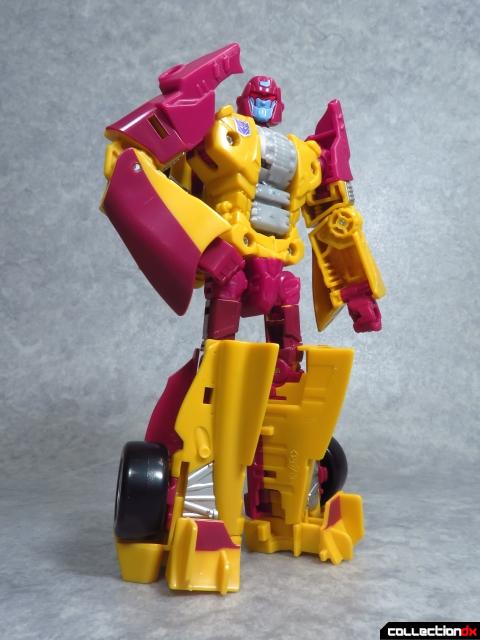 Much like with Alpha Bravo, Dragstrip is a straightforward Transformer who is oozing with personality. His articulation includes ball-jointed shoulders, bicep swivels, hinged wlbows, a free moving waist swivel, ball-jointed hips, thigh swivels, hinged knees. The transformation joints in Dragstrip's shoulders also give his arms greater range of motion for bringing the sass. 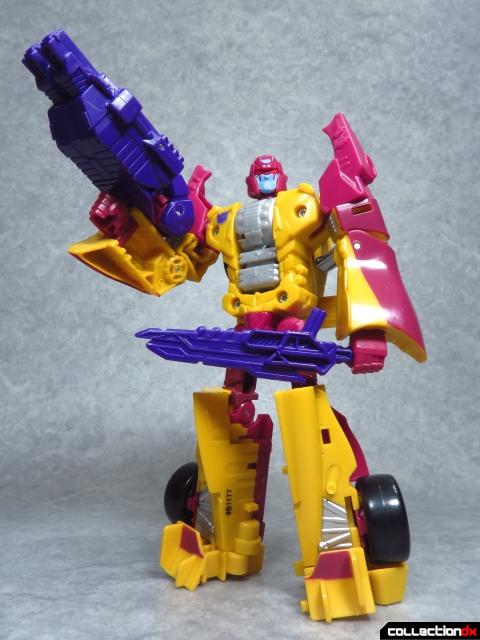 This Stunticon comes armed with the standard combiner limb hand/foot/gun and a matching purple sword. He can hold both weapons with ease. 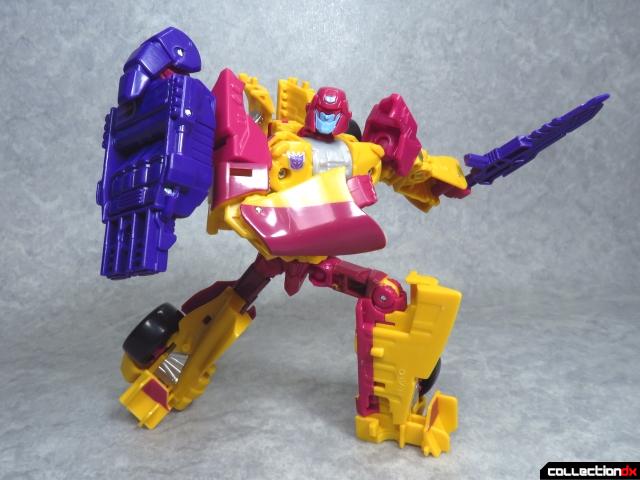 A hole on each shoulder lets Dragstrip use his combiner accessory like a large shield. 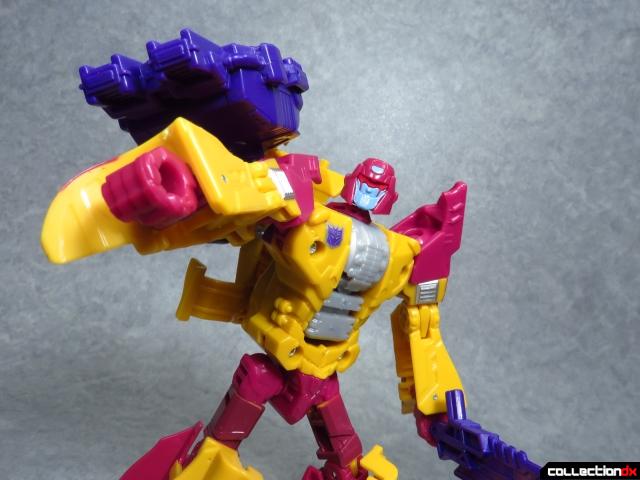 He can still utilize the accessory as a big arm mounted blaster even when its plugged into his arm. 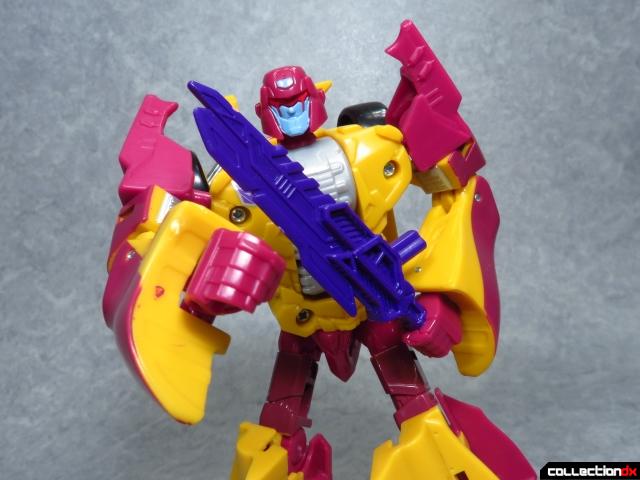 Dragstrip's melee weapon is a good looking techno short sword that plugs firmly into either hand. 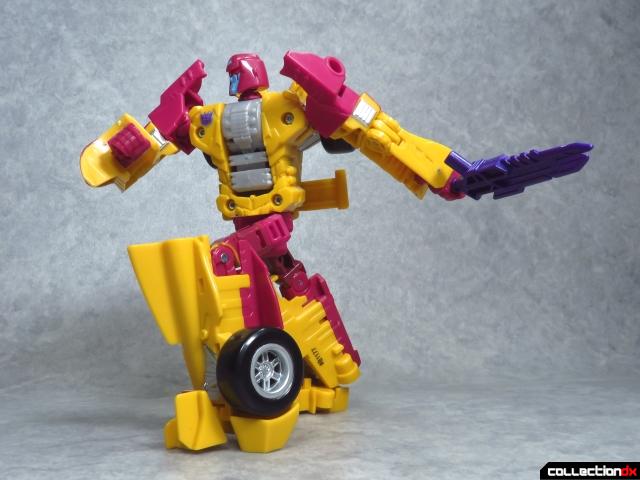 He has just the right amount of articulation to effectively wield the weapon. Also note that Dragstrip's feet (the spoiler in car mode) are flipped up for limb mode, which means they can be used as a makeshift ankle joint. This is a neat extra but if you don't use this joint, his immobile soles do a good job keeping the Stunticon upright. 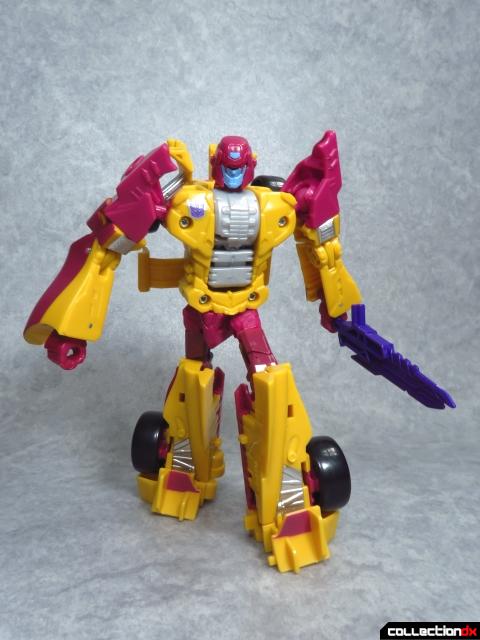 As I mentioned with Alpha Bravo, Combiner Wars figures have a lot of character to them for being such straightforward toys. For instance, Dragstrip can pull off subtle poses like a slow walk forward while brandishing his blade. 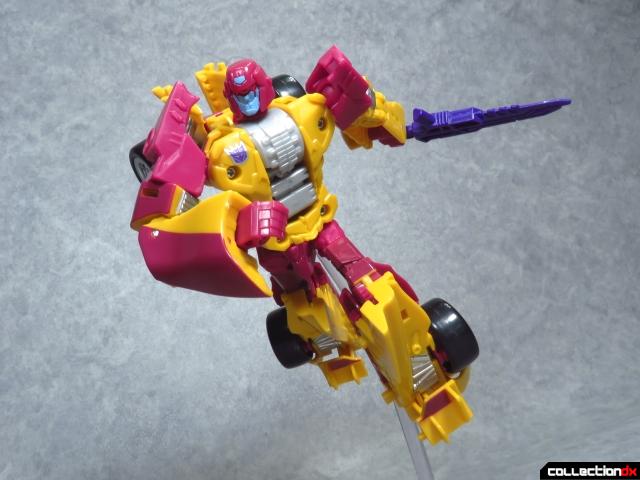 And as a neat easter egg, there's a small hole in the back of Dragstrip's pelvis that is sized perfectly for a Tamashii Stage or other display stand with a similar connector. I have heard from fellow reviewer, Dkun, that lately a lot of Transformers have worked in this bit of cross company compatibility. 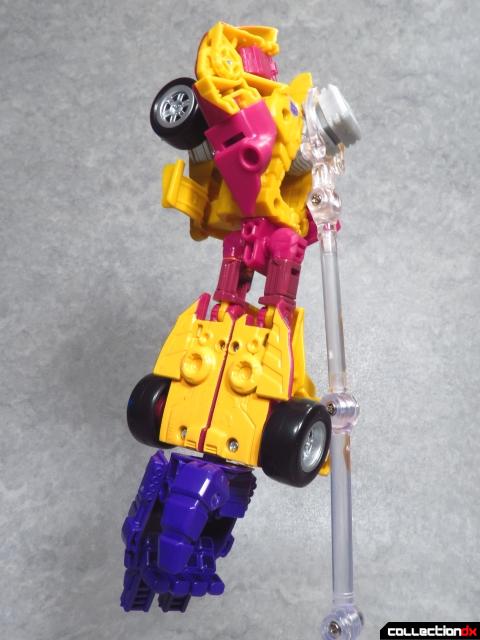 Transforming Dragstrip to arm mode is easy, but remember to flip up his feet/spoiler otherwise he'll end up a longer limb that any others you have attached. His own arms curl up and around the top of Dragstrip's body and stay in place thanks to the tightness of his joints. While they don't lock in, the tips of Dragstrip's arms are guided into the right location with a pair of slots near the Stunticon's waist. Unlike Alpha Bravo, Dragstrip's head is not connected to the combiner joint. Rather, it flips up out of the way on its own armature. For aesthetic purposes I would recommend turning Dragstrip's head around so his face isn't peering out from the top of the limb. 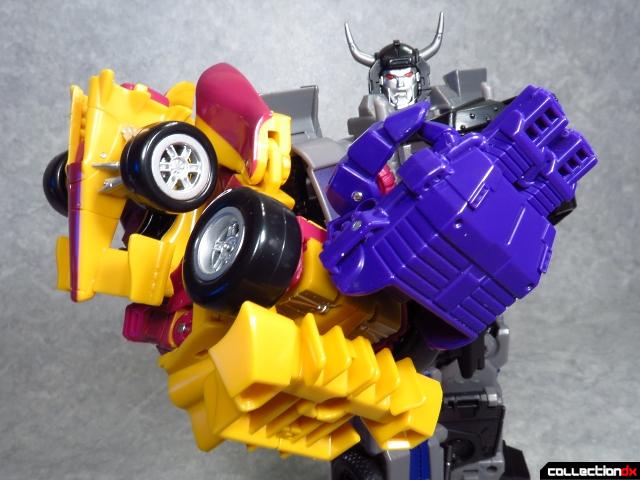 Now that I have Motormaster, demonstrating the Combiner Wars main gimmick is much easier. Dragstrip makes for a formidable looking appendage while offering modern amenities like a bicep swivel, curling elbows, and a rotating wrist. The combiner connector works as a hardy universal joint with strong ratchets in either direction. 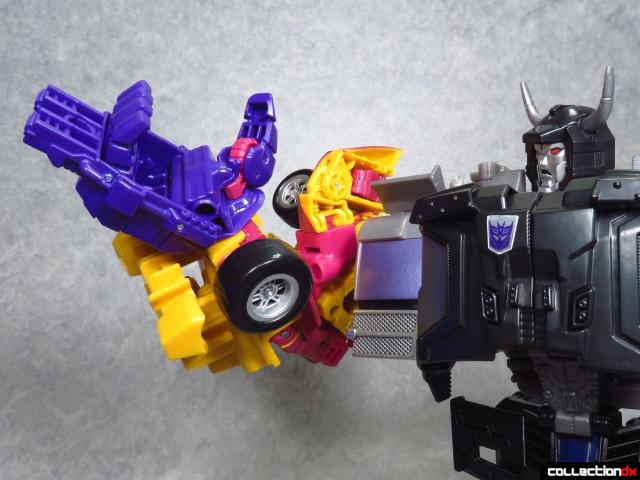 Despite its toyetic design, the hand works really well and gives Menasor some powerful mitts. 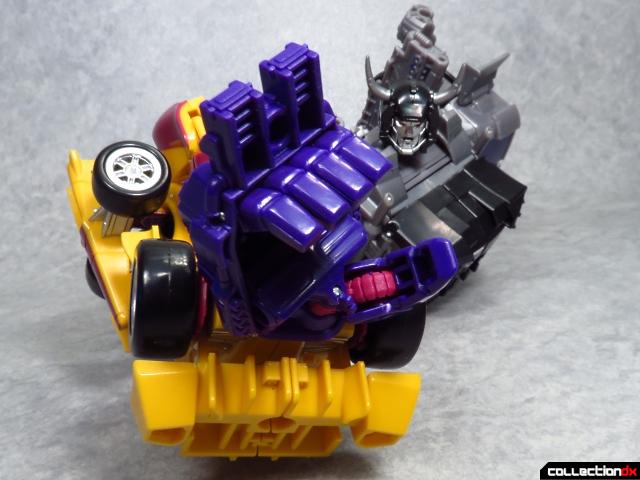 At the time of this review, I am still waiting for the rest of the Stunticons to arrive from Hasbro's online shop. So in the meantime, please enjoy a one armed Menasor reaching out in a menacing manner. 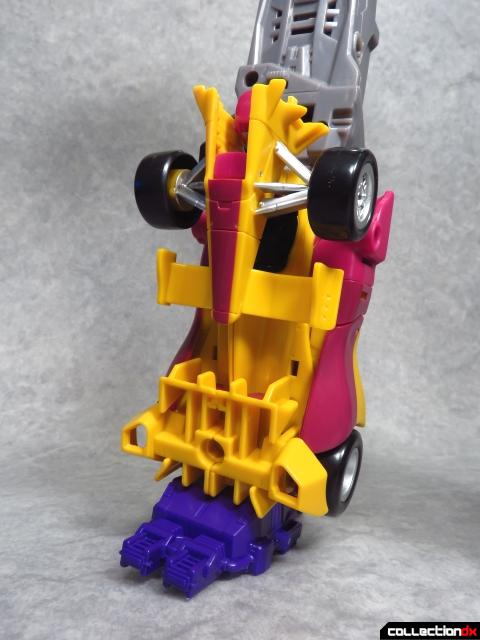 Like with Alpha Bravo, Dragstrip's leg mode is a barely changed vehicle mode and that is perfectly fine. You just spin his waist around, slide up the lower legs, and then tab the back of the car into the main body. Note that despite the smallness of the foot part, it does a great job of keeping the full combiner standing tall. 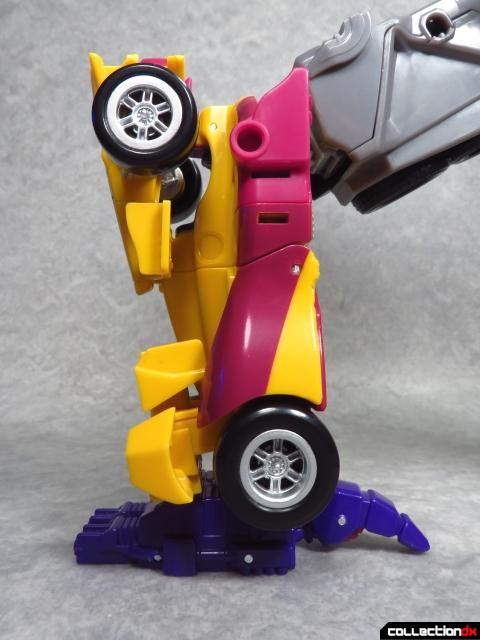 The combiner part's movable thumb pulls double duty as a reliable heel strut. Also the same connector that gave Menasor a fully functional shoulder is reused as a sturdy knee joint that can even swivel in place. 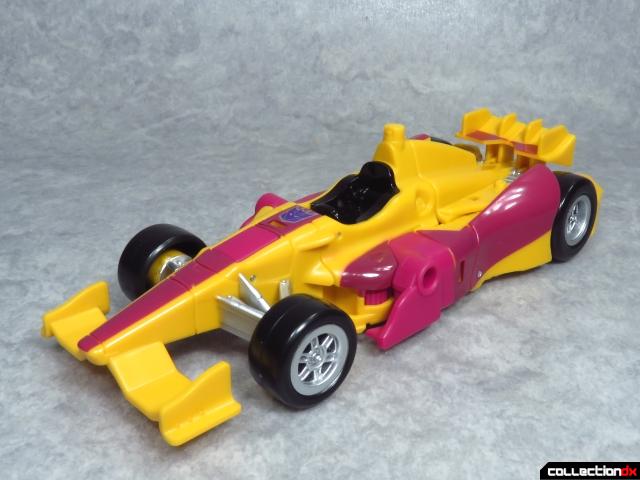 The conversion to vehicle mode from leg mode involves flipping Dragstrip's head back down and then maneuvering the front of car up and around into the right place. In this form, Dragstrip is incredibly sleek and makes for a terrific Formula One racer. 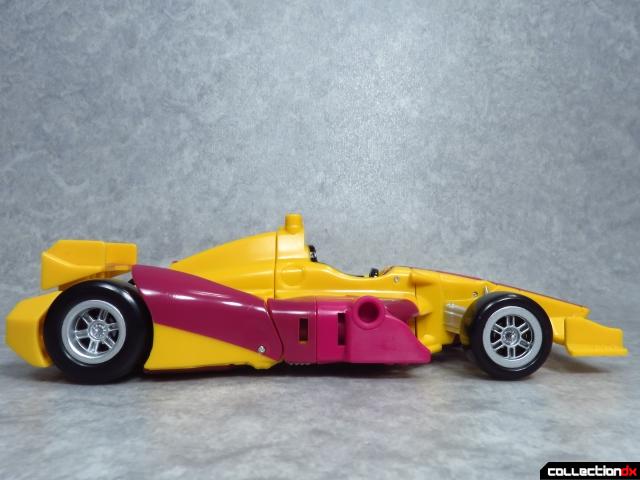 Everything is locked together nice and tightly, and Dragstrip rolls smoothly on his wheels. 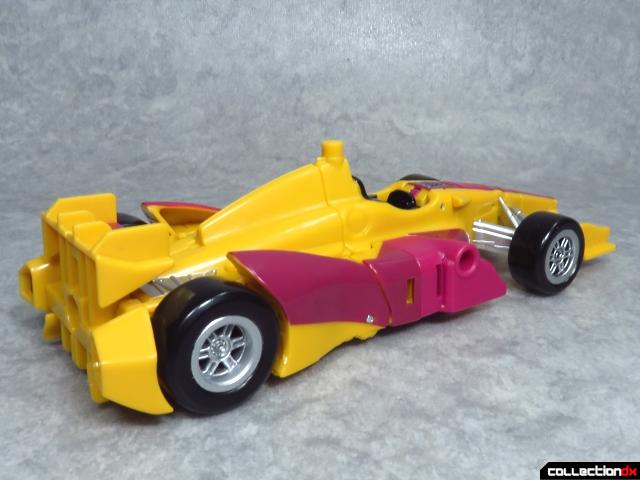 I must admit that I am not too familiar with the particulars of F1 cars, but this toy looks pretty on point to my untrained eyes. 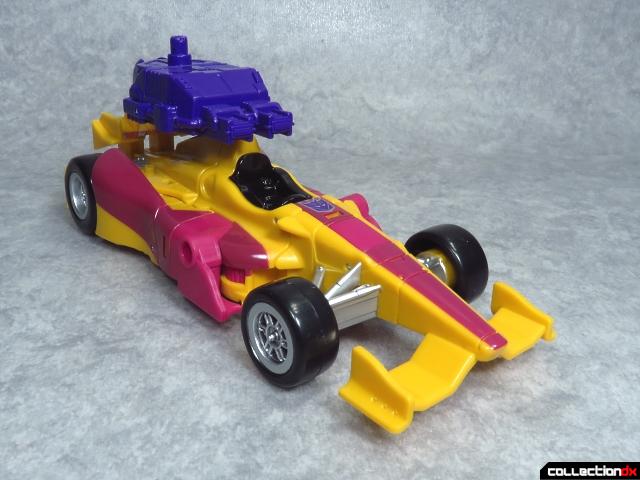 For a G1 toy inspired "attack mode", the hand/foot/gun can pop onto the peg atop Dragstrip's car mode. The actual hole on the gun is set inside its gun barrels so it's a little weirdly positioned. 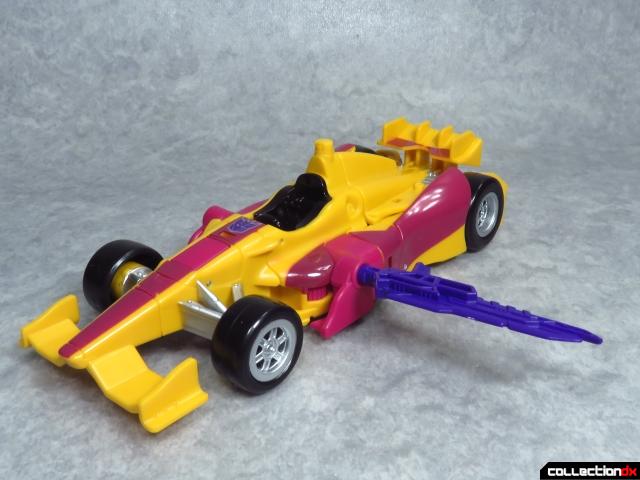 Also you can plug his sword into either hole on car's sides or even in the rear. It looks pretty silly wherever it is placed but at least on the flanks of the vehicle you can imagine Dragstrip slicing up his competitors like the dirty Decepticon he is. 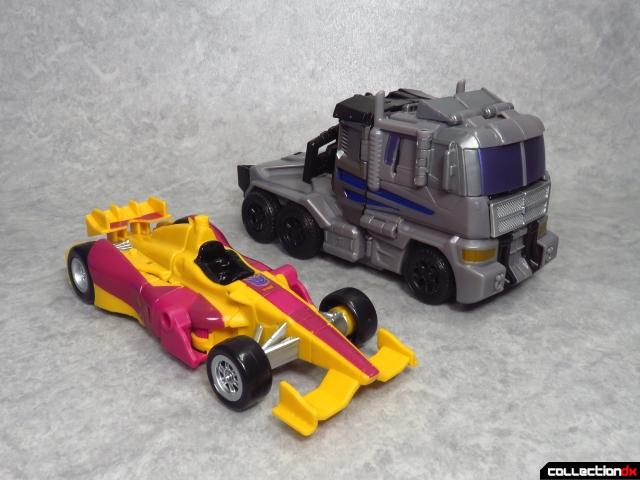 The scaling between Dragstrip and Motormaster is a little off when they're both in vehicle mode but it's still much better than how their G1 counterparts compared. This does make me wish Motormaster had a trailer to cart Dragstrip around though... 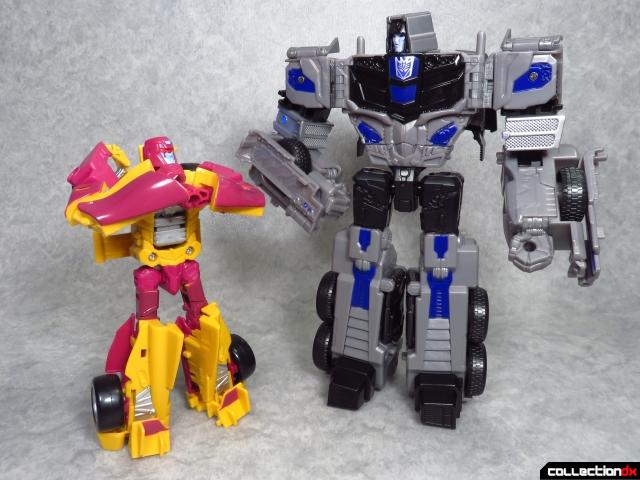 "Dragstrip! I heard that flying Autodweeb gave you the runaround!"

"Aw gimmie another chance, boss! I've warmed up my motor and I'm ready for a rematch!" 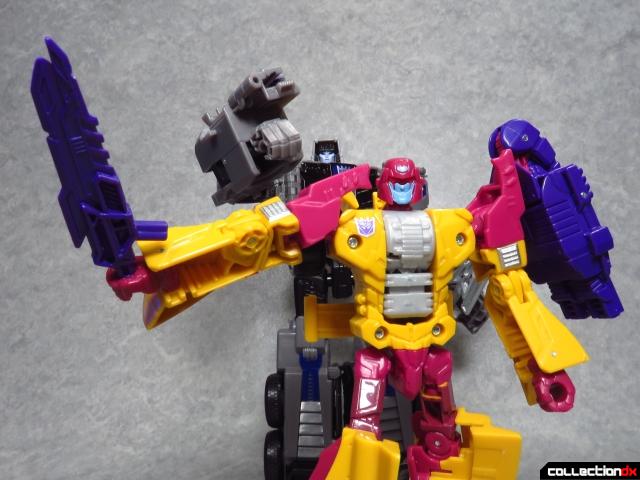 "Alright, get out there and kick some turbines!" 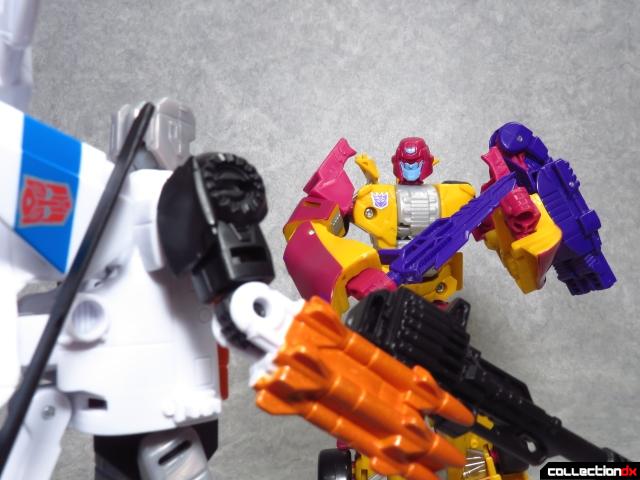 "Okay, Whirlybird, it's time for the second lap."

Dragstrip is another Combiner Wars toy that is great on his own or as part of a bigger robot. He is a cleanly engineered transformable car who is a satisfying addition to the Decepticon ranks. I think Dragstrip's car mode especially makes him an attractive purchase even for those who just want a standalone toy. If I had one complaint about him, it would be how his legs have the usual sliding mechanism for transformation rather than the clever swing bar method Alpha Bravo and the other Aerialbots posses. Honestly though, that's just me getting annoyed if his legs collapse accidentally while posing him. Otherwise, Dragstrip is another fun toy and makes me really excited to complete the Stunticon team.