I think I walked past this three or four times at Ocean State Job Lot before deciding "to hell with it" and plonking down my $9.99. I figured at worst it would be fun to show how terrible it was, but the end result was quite the opposite. I mean yes, it's terrible, but it's also fun.

So here's the box. I'm a little dismayed at the lack of engrish on the packaging. Whomever did this had their good proofreaders on the job. I was amused by the excessive amount of information about the batteries at the bottom. The clear window has a hole in it to try the sound effects. The sound goes on forever, so if you want to get kicked out of the store, just start pressing all the buttons on all the toys at once. 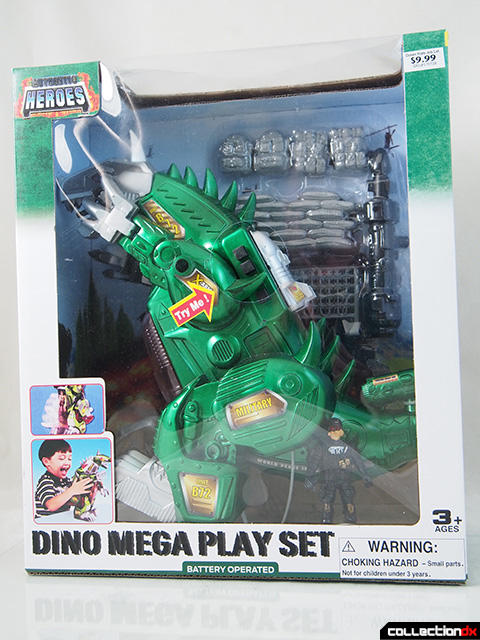 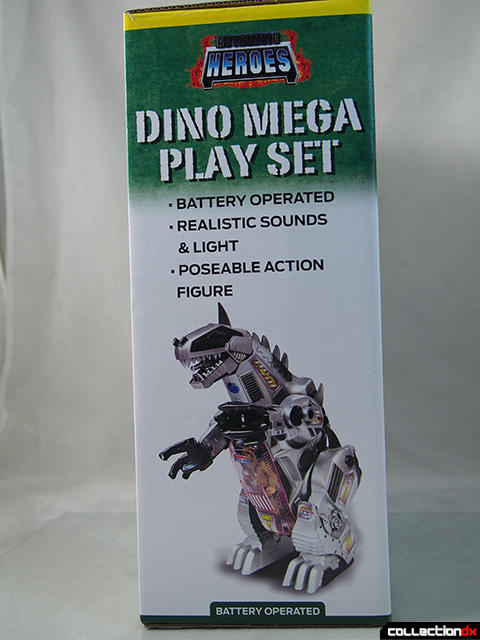 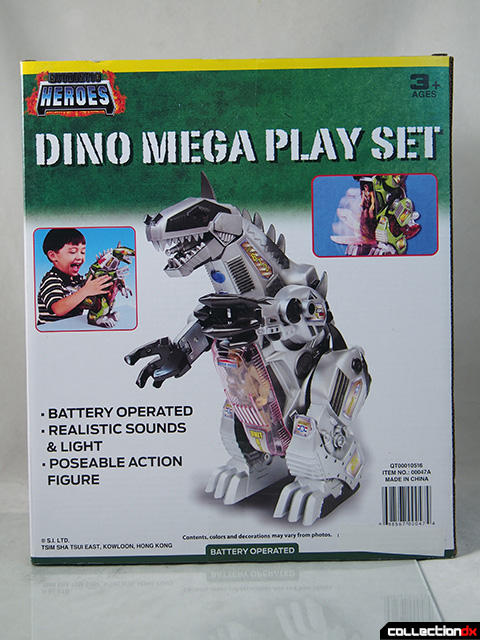 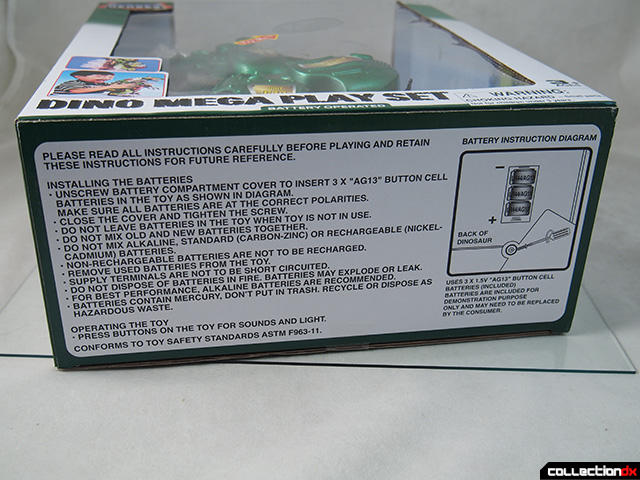 The instructions reveal that the toy's real name is the Dino Mega Cruiser. 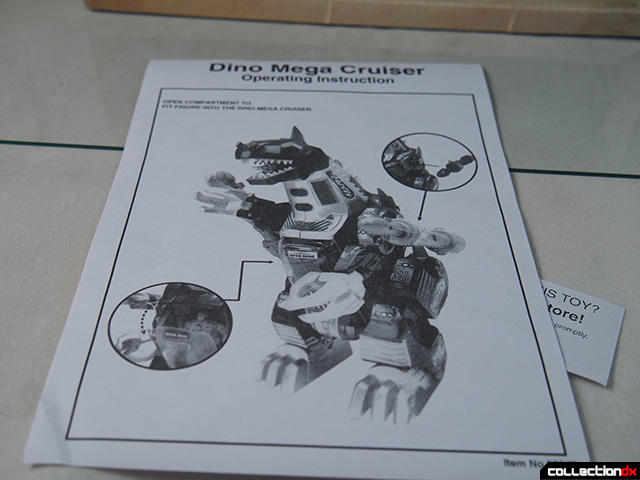 Also, if you have problems, DO NOT RETURN IT TO THE STORE. Instead, send the email to this address, which does not exist. 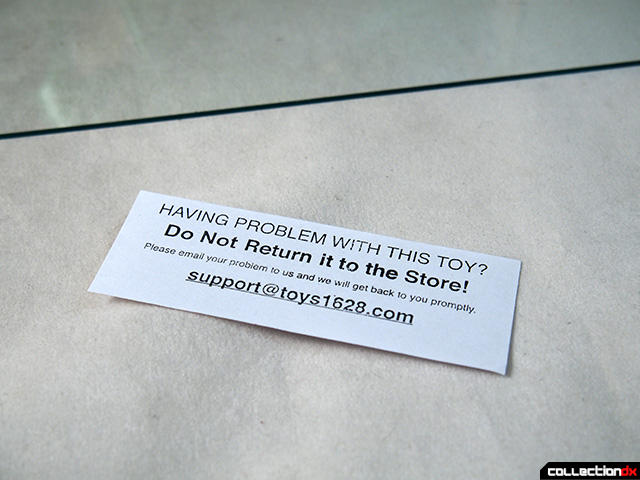 There are some accessories vacuum sealed to the back of the box. These military themed accessories serve no purpose whatsoever, and must have been thrown in because they were screw ups from another toy line. The fences don't stand up, nor do the sandbag walls. The backpacks don't even attach to the figure, and are totally the wrong scale anyway. 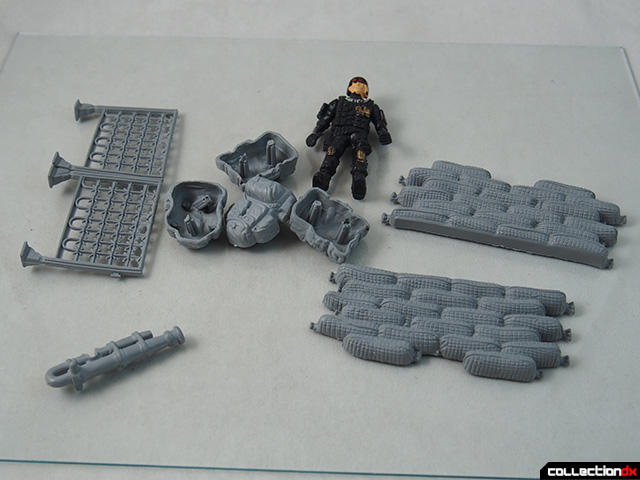 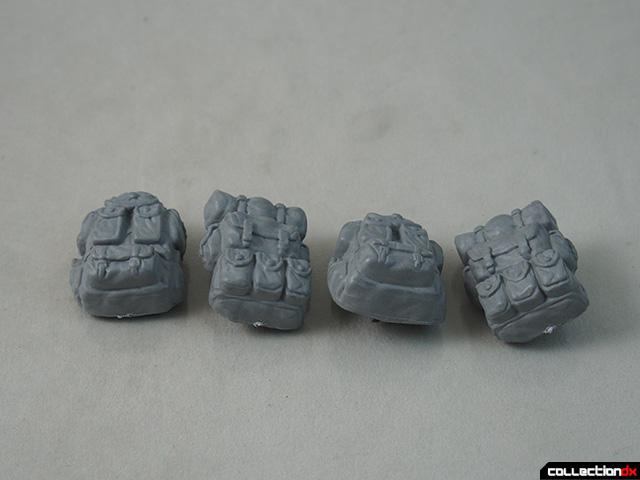 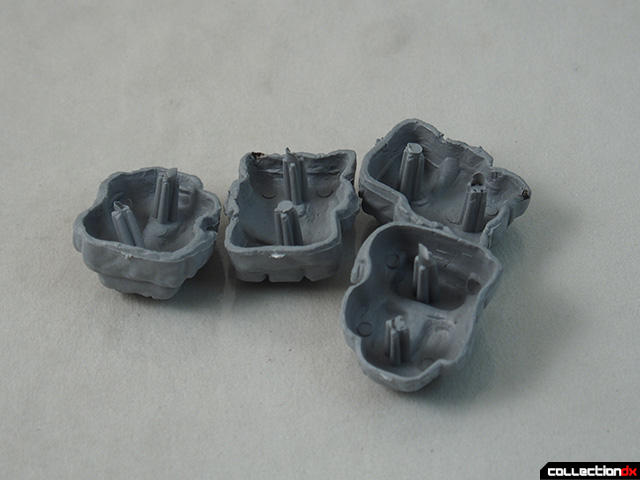 I think this one is a cannon from a pirate ship? WTF? 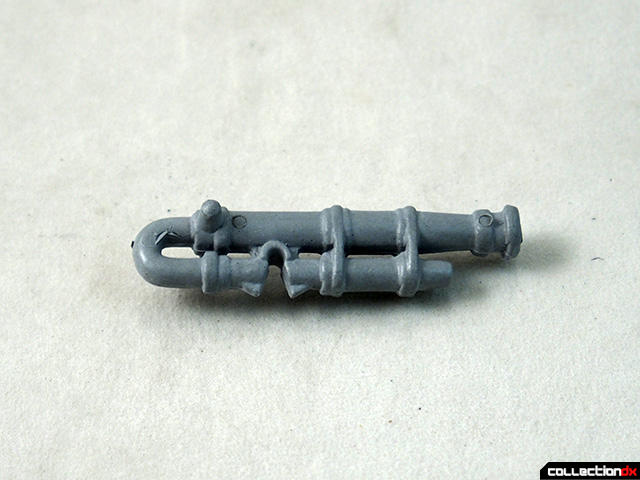 The figure is a little smaller than 3 3/4 scale, and it looks like it was painted by a blind child in the back of a moving vehicle. It's just terrible. 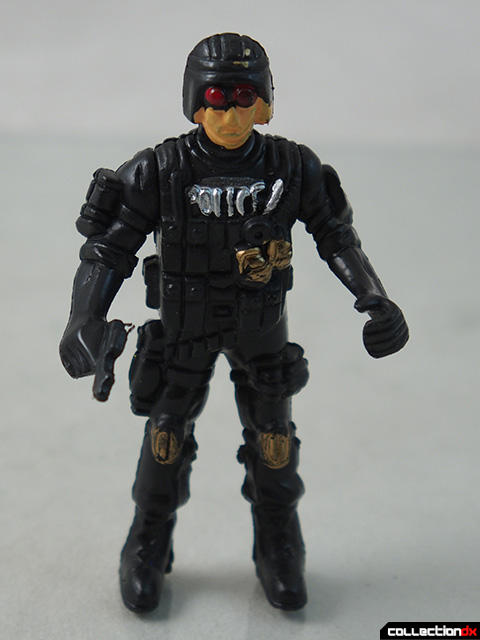 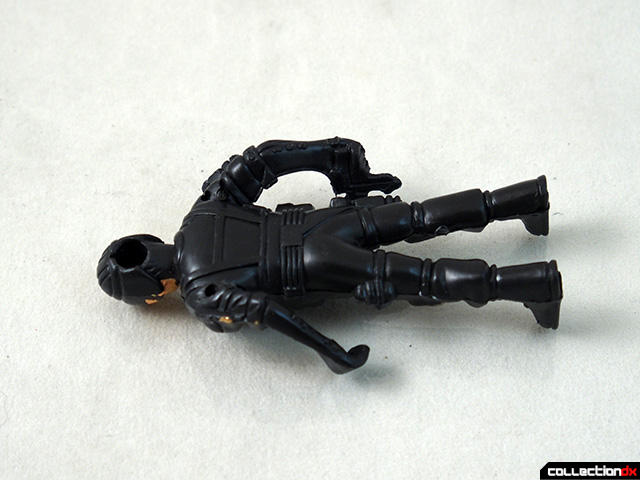 None of this really matters though, because Dino Cruiser is the star of the show, and he is awesome. 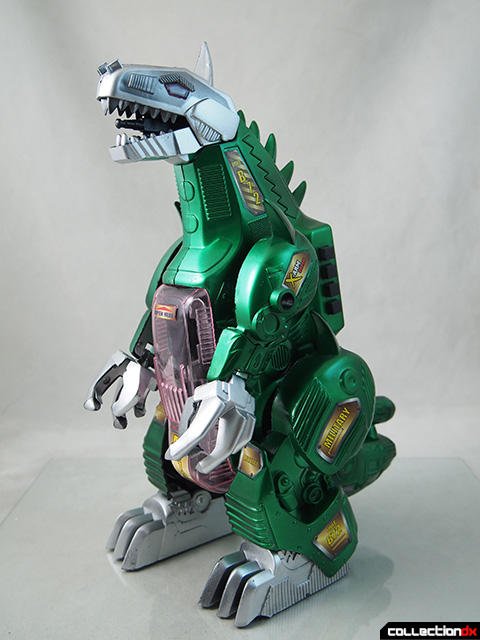 He stands about 12" tall, and is made out of cheap hollow plastic. Despite that, the mold and paint are pretty good. It feels like one of those toys that might have had a walking motion in a previous incarnation. 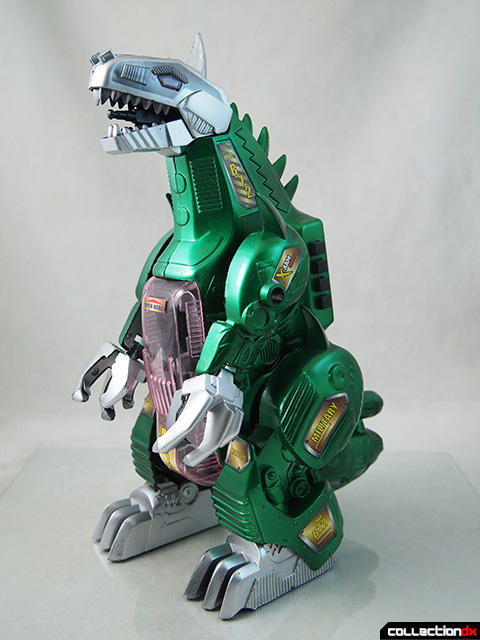 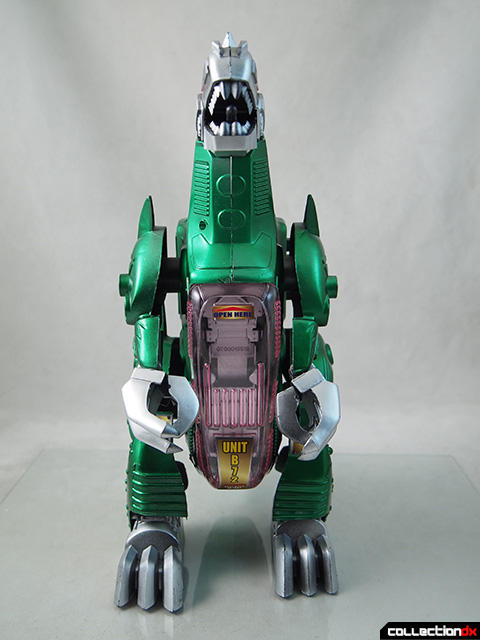 Both arms swivel at the shoulder, and the hands move on a hinge and have opening claws. The legs move at the hips and the feet move as well. 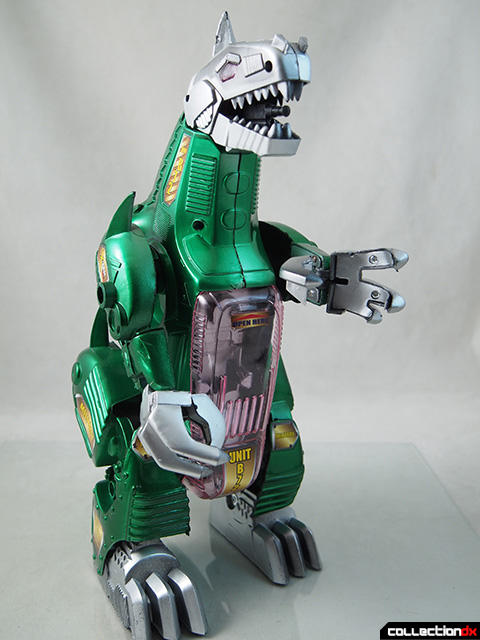 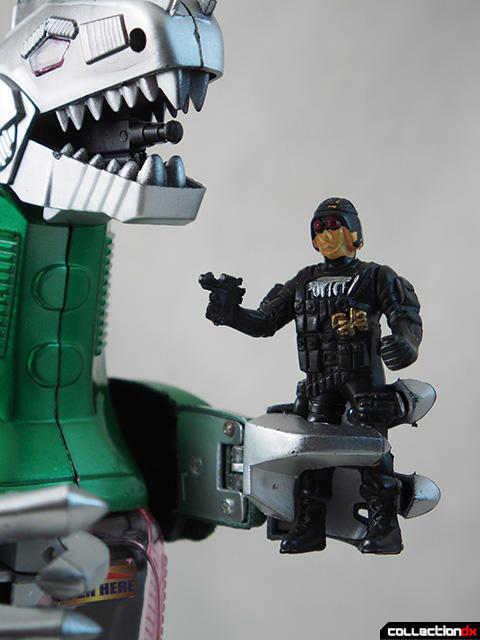 The toy is adorned with nonsensical stickers. The green metallic paint is nice actually and makes for a striking look. The toy is also available in silver, but that one just wasn't as cool looking. 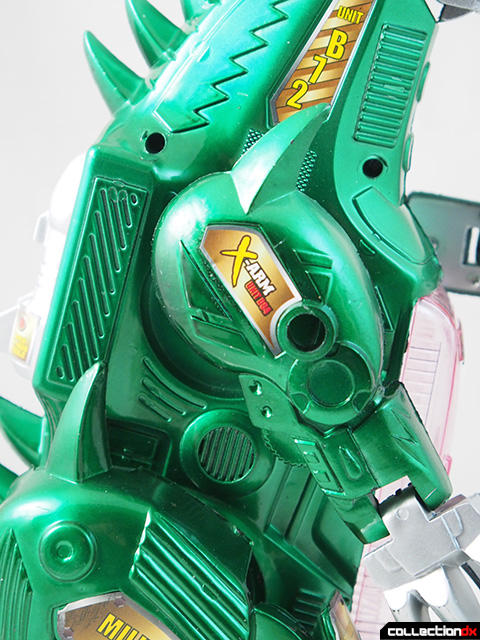 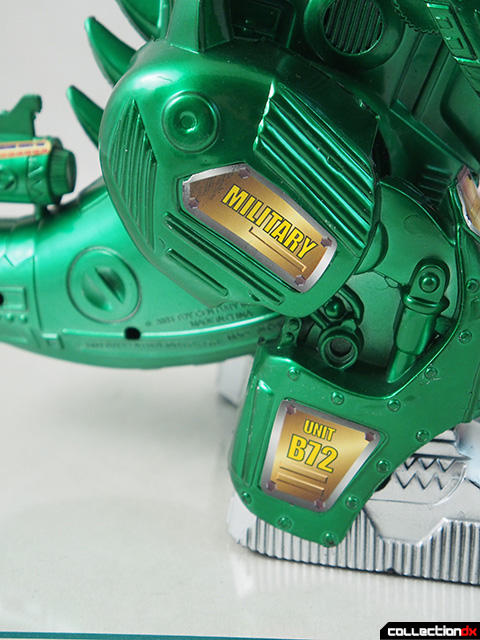 The panel on the back houses the batteries for the light and sound effect. There are several buttons, but they all make the same string of sounds. 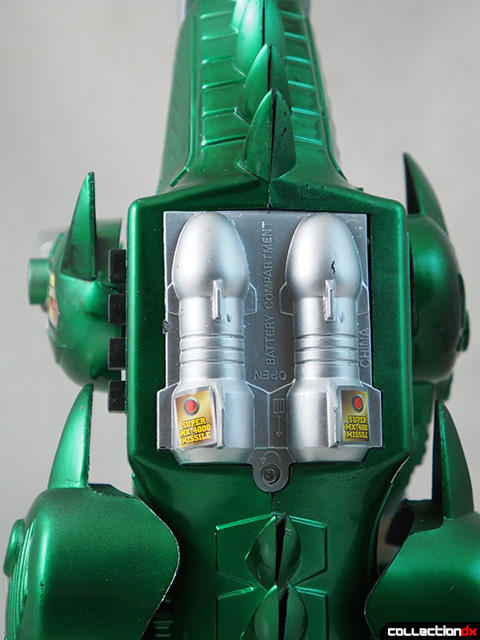 My favorite feature is the opening cockpit. It opens from the top (with a little force), and you can insert the included figure. 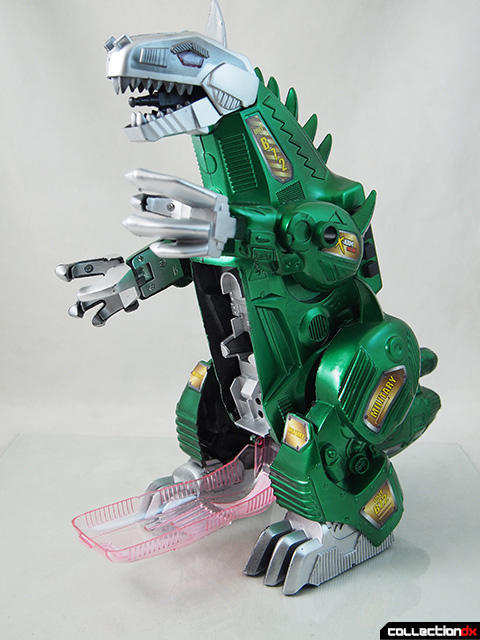 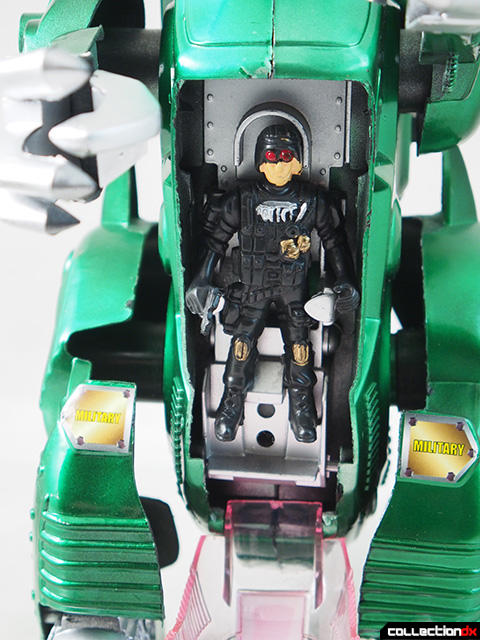 The space for the figure is a bit big for the included one. A vintage Kenner one fits much better. 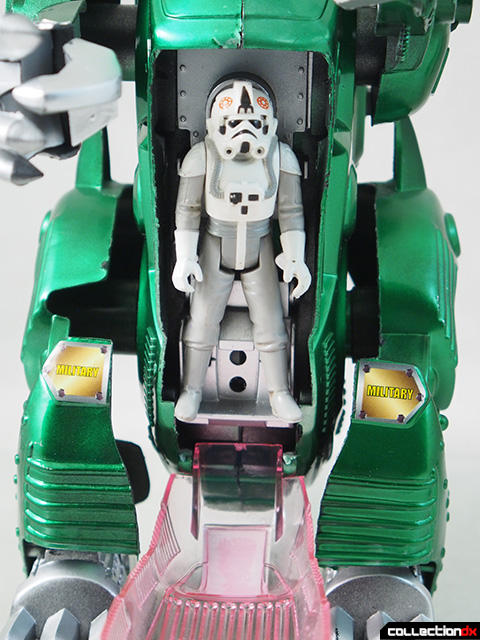 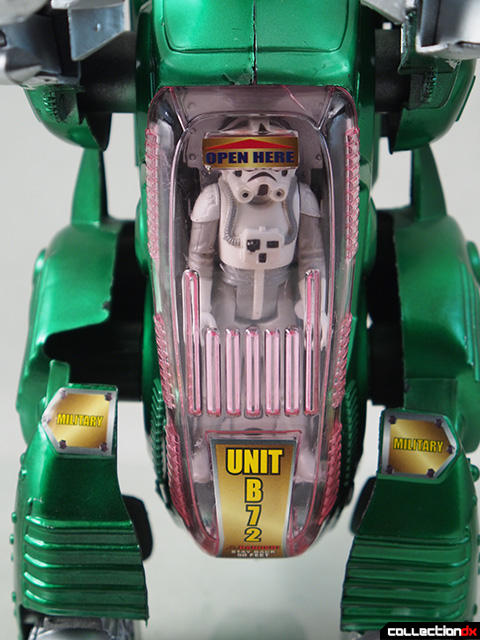 Also included is a large missile launcher that attaches to the shoulder. There may once have been a spring loaded firing action, but that's been stripped out for this release. The result is if you tilt the launcher down, the missile just slides out. 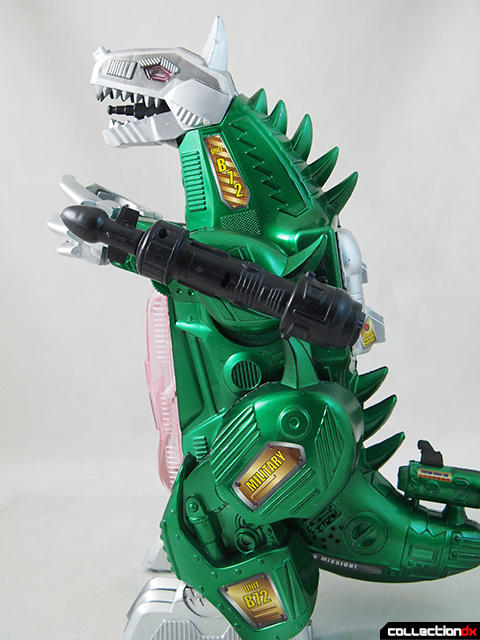 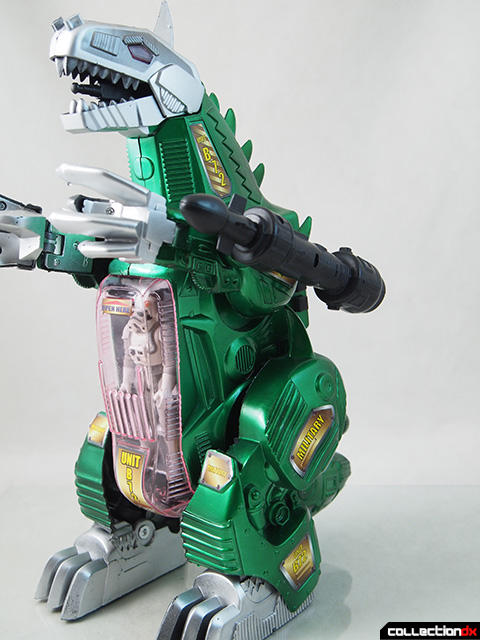 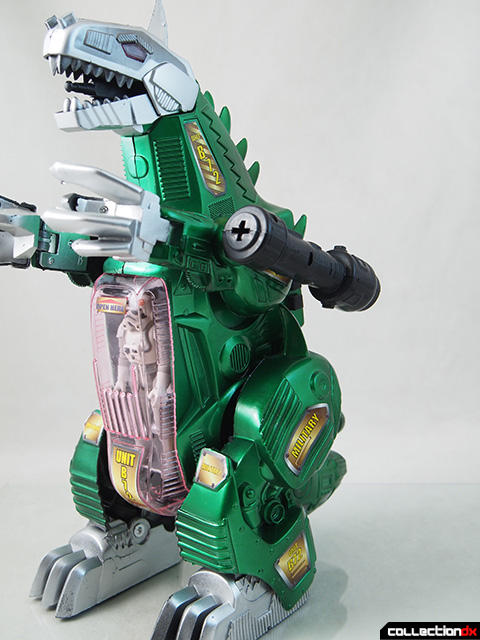 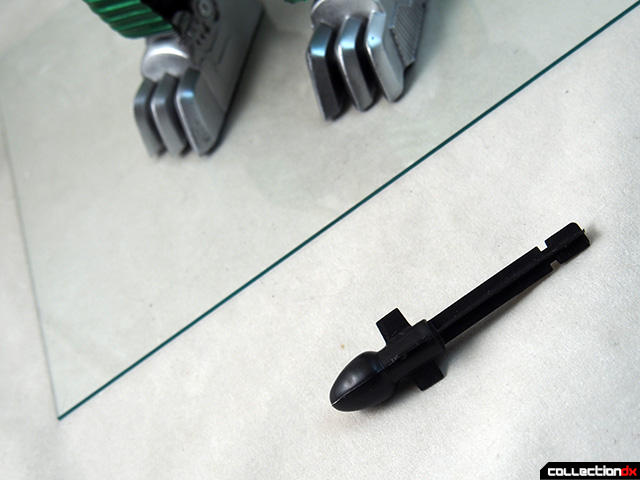 I mean yeah, it's a crappy discount store quality robot toy, but for ten bucks you can't go wrong.

The basic body shape and proportions are based on the Zoids Death Saurer. With the green one it's harder to tell, but the silver one on the box has the Death Saurer's distinctive panels over the eyes.

Now, the Zoids are all model kits, so this most likely isn't a direct rip of a mold... maybe there was a scaled-down Death Saurer toy for younger kids? I dunno. Whoever made this rendered it with surprising accuracy, though.

I think you've also solved the problem of why the Empire did not defeat the Rebellion. A distinct lack of fire-breathing dinosaur mechs.

For whatever reason if you need support