In the feverish, heady days of the mid-eighties, animation studios caught the Real Robot Fever and, as a result, vomited a great geyser of post-Gundam product onto the market, including the beloved Votoms and Dougram properties. But mistakes were made. Srungle, or Outer Space Mission Srungle, was a very big mistake. (for a thorough description of Srungle, I defer to our friends at toyboxdx).

This model is from the Srungle-only System Mecha Collection, roughly similar to Popy’s ST line. Clover also produced a version called “ST,” which is larger and more elaborate than a Popy ST, as well as a proper DX abomination. And if you can parse that sentence, you are already too far gone.

The SMC starts out promisingly enough, with a handsome, heavy box. It is, after all, a Clover toy. 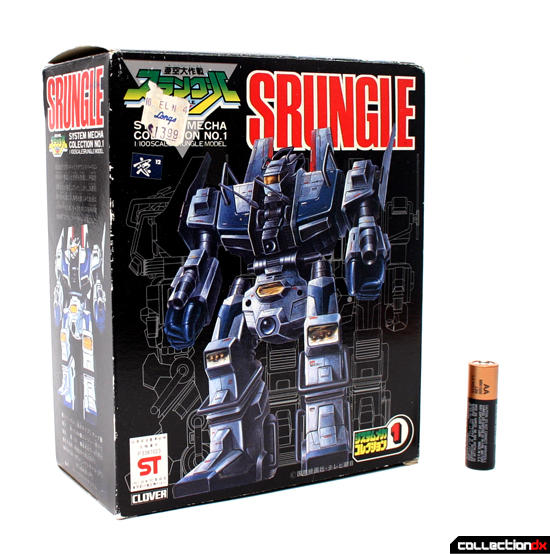 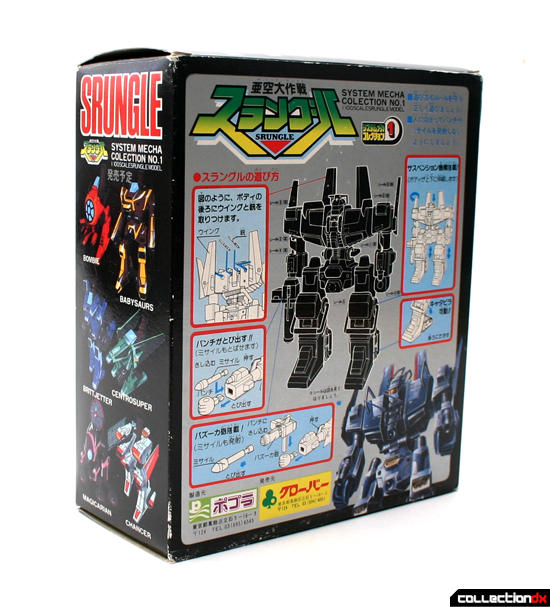 Not exactly beautiful, but not too...wait. There is something amiss with that crotch. Who did that? 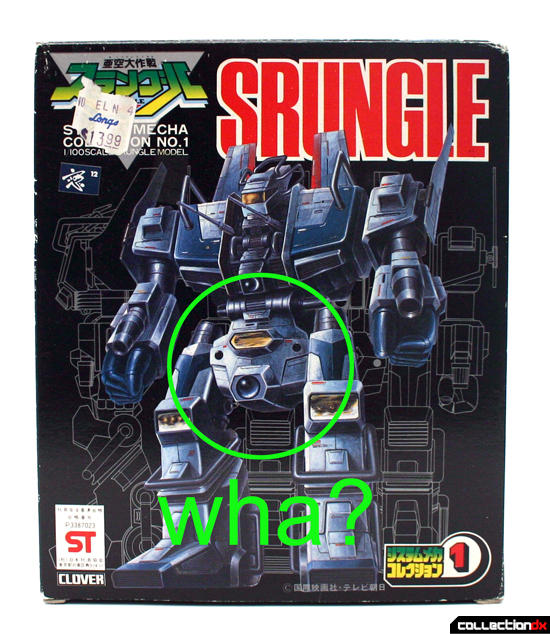 Inside, a classic styrofoam tray filled with blinding white mediocrity! the SMC comes with a gun, a couple of antennae, a couple of projectiles, two tiny wittle wings, and a smallish sticker sheet. 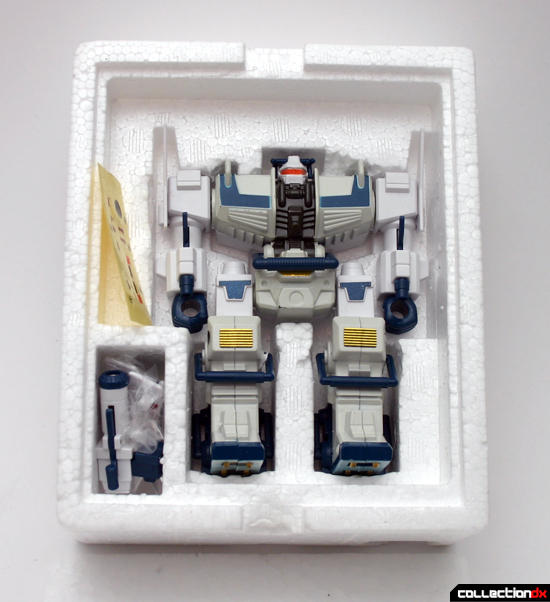 Merely attach the two wings, fold out two more from Srungle’s shoulders, and he’s ready to rock. I don't claim to be an expert on aerodynamics or terrestrial/outer-space flight, but I can’t imagine that those four wings function in any meaningful way. 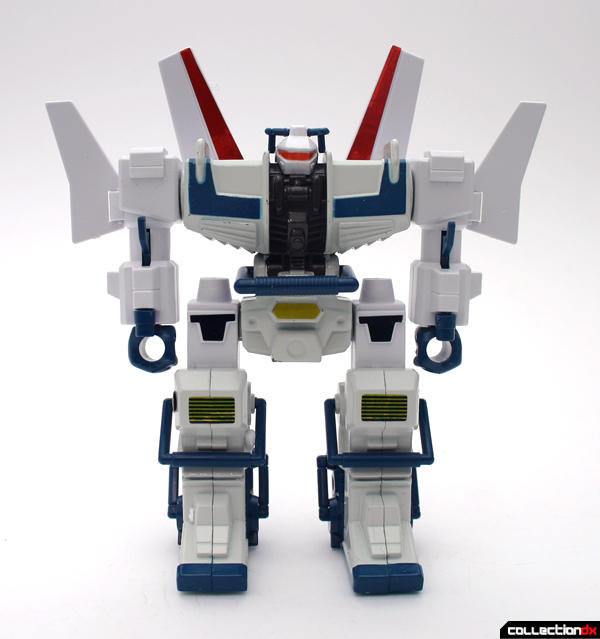 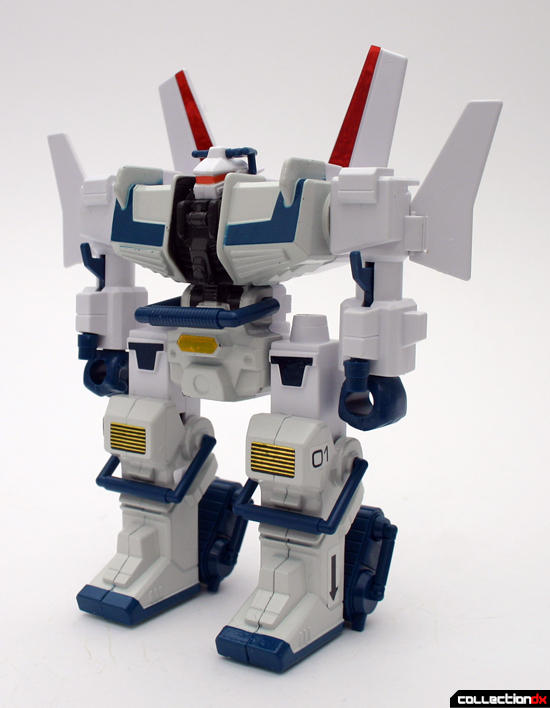 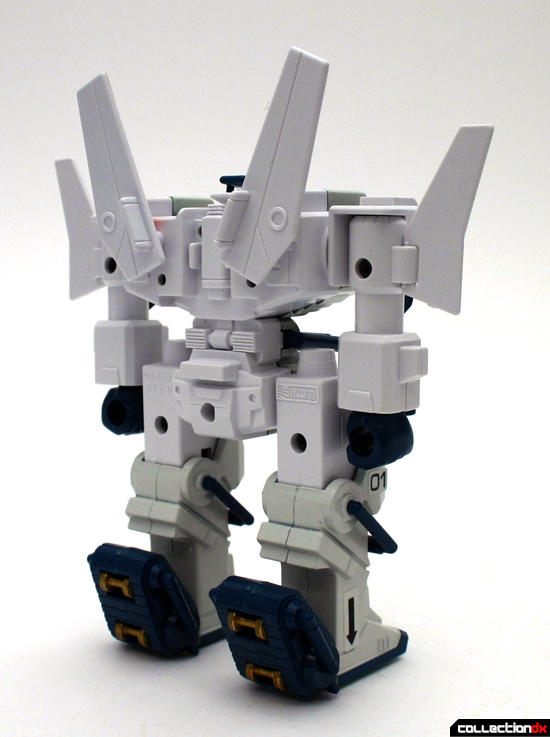 But the toy. He is a massive, heavy chunk of gokin (everything off-white is metal). And he comes with a perfectly respectable array of features and accessories.

Neat Scopedog-like skates fold down at his ankles. 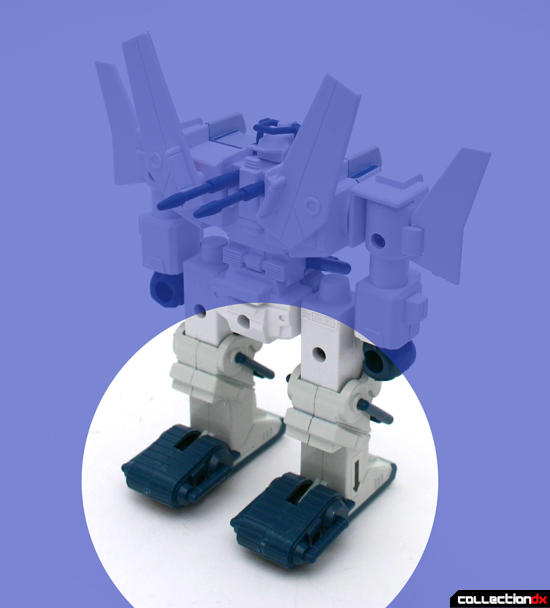 The included antennae plug into his back for antennae-themed imaginative play. 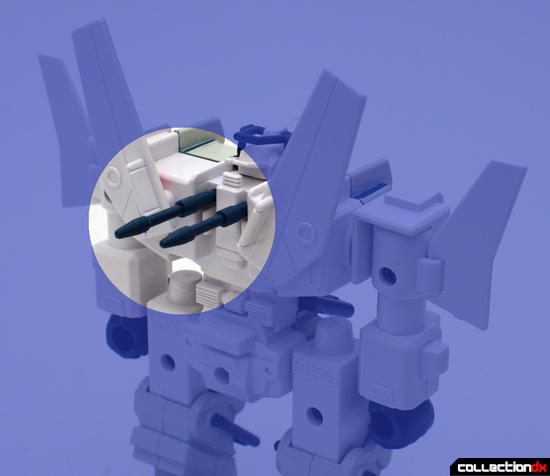 For some reason you can compress the figures at his knees via a hidden spring, not unlike the Dougram’s ankle suspension. 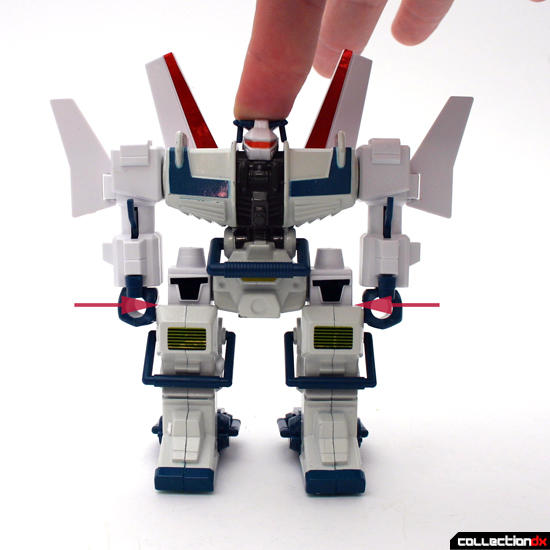 He has a gun. It fires, as do the fists. 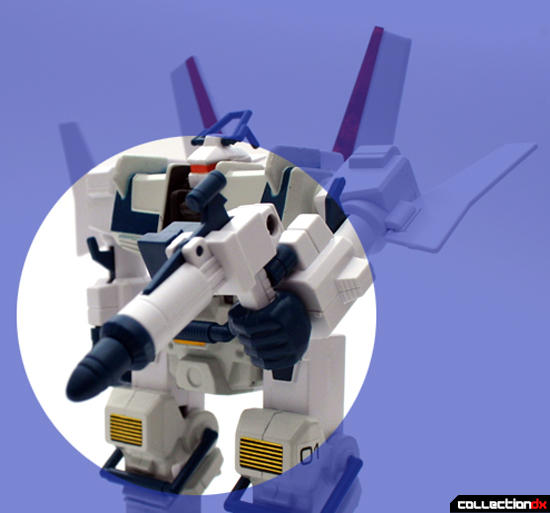 Poseability is exactly what you’d expect. The action-packed shoulder joints allow you to recreate the following iconic Srungle poses! 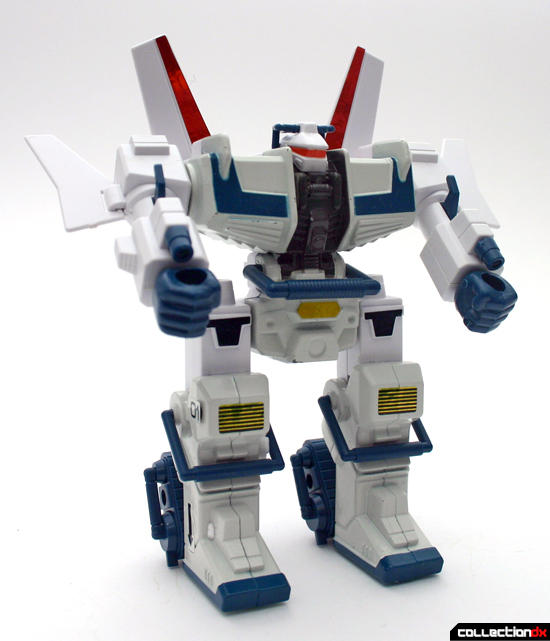 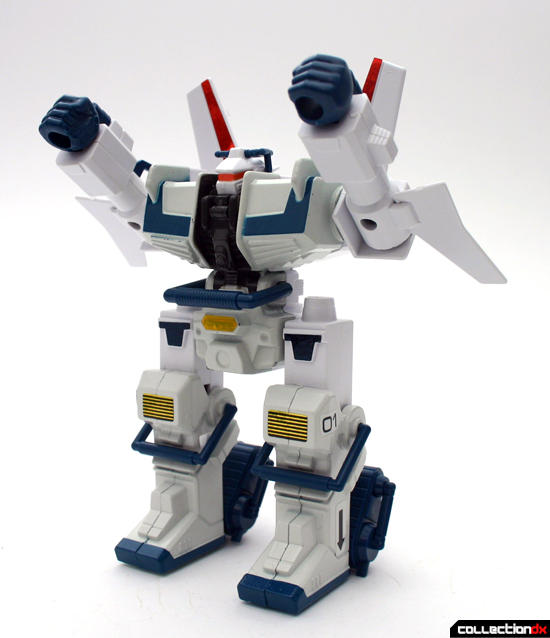 So yeah, ugly. But even more fascinating to me is that Srungle achieves his Legendary Ugliness while still being fundamentally boring. Maybe it’s his unrelenting whiteness? I’m leaning towards that. It’s just that the thing has no presence to speak of. I happen to like ugly, when it’s done right, but this is ugly done wrong.

The SMC Srungle does have a very useful utility in the case, though. He somehow manages to make his older brother, the “ST” look exciting and dynamic in comparison. 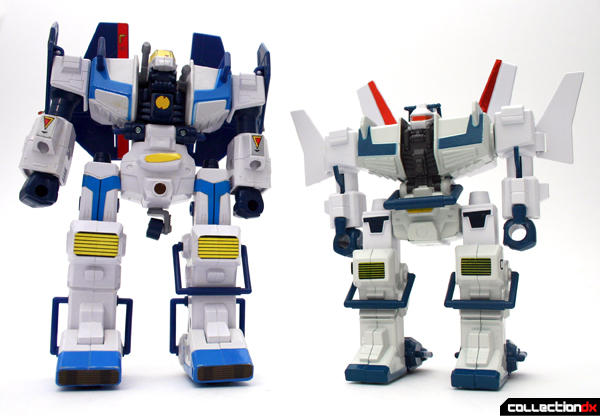 I don't get it, what's wrong with his crotch? O_o?

I honestly think he looks pretty cool. Almost any 80's real robot looks cool to me. I'd buy him if the price was right. Also It doesn't hurt that I'm definitely pro-crotch.

the ugly, cumbersome aesthetic really has some great charm. I bet that thing just looks rad on a shelf. but oh my! that is one beautiful box.

It's so ugly...but that doesnt deter me from always looking for one. I end up finding them and then hold off, I'm loving the box and it does have a certain charm to it. Thanks for the review!

BTW, I have the 17 in one bot thing and it is hideously awesome

Ah, Chachi, welcome to a very exclusive club. You are a man of taste and refinement.

I've actually always liked the Srungle design. Yeah, the OP theme makes it act more like a super robot though.

BTW I watched the first two episodes of the anime raw on Youtube. Meh but not horrible.

The Srungle is a bit bland for my taste by it is still a cool piece to have for the collection. Clover is an amazing company, one of my favorites and that alone is worth picking this guy up.

It looks kind of like one of the mechs from Robot Jox.