Like any robot franchise, Super Robot Wars Original Generation has its share of flagship mecha among the numerous designs that populate the games. When you start playing Super Robot Wars OG, you are given the choice to follow the story of the SRX Team or the ATX team. The main mecha of the ATX side is the unstoppable bruiser known as the Alteisen. Equipped with several punishing attacks, the Alteisen's is like a linebacker on the field of battle.

Super Robot Chogokin is Bandai's latest attempt at a no frills, down to business toy line which emphasizes affordable and dynamic gokin action figures. After dispensing a pair of Mazingers, Bandai chose to follow up with the promise of several Super Robot Wars original designs. The first of these is the Alteisen. While there have been toys and model kits of this design before, I feel this figure is the first one to truly capture the spirt of the Alteisen as a toy. 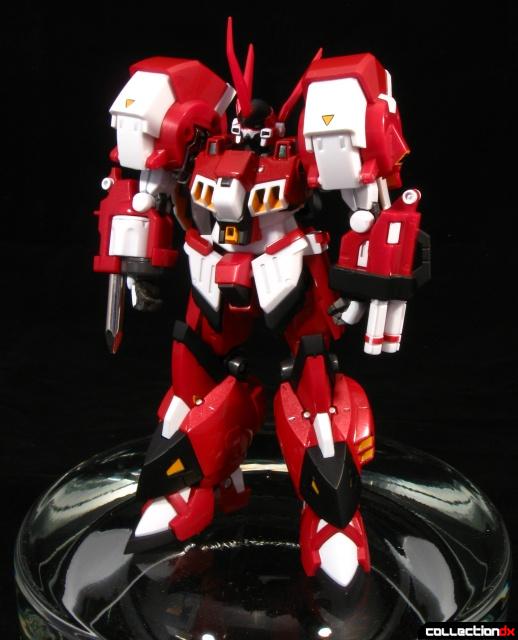 Standing roughly 14 centimeters tall, this Alteisen is compact figure with presence and a good bit of heft thanks to its diecast chest and shins. Solid construction from head to toe, this Alteisen feels like the perfect action figure in every way. Now on the to gimmicks. 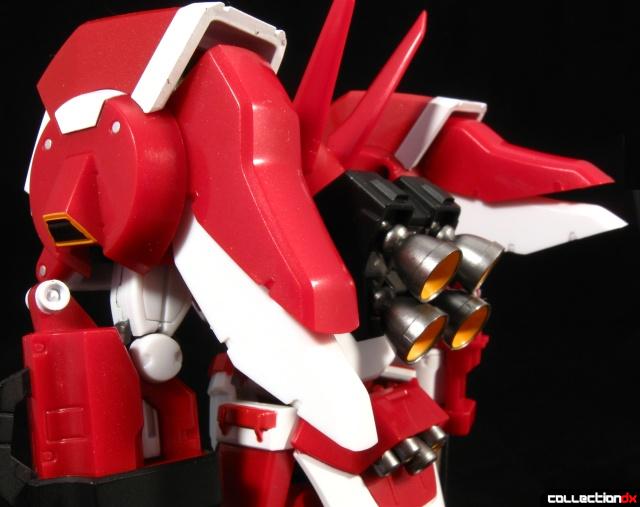 The shoulder mounted thrust vanes can swivel up and down. 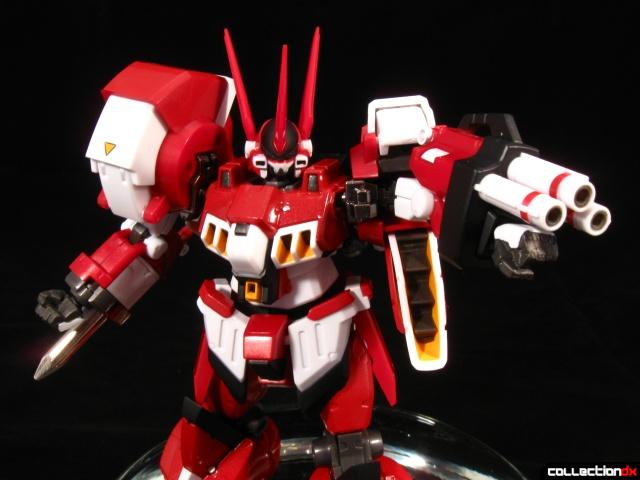 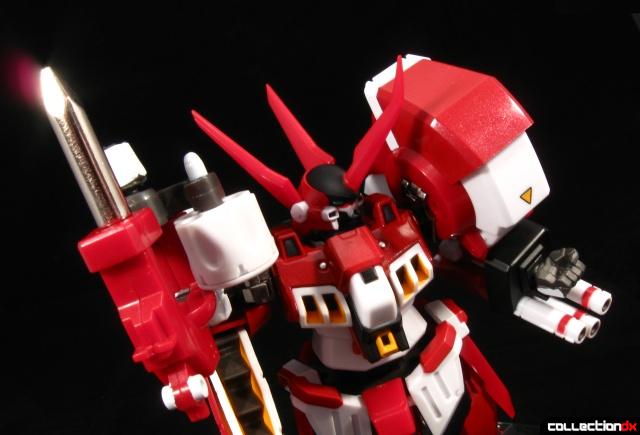 While the right arm has the signature Revolving Stake. Not only does it have a working chamber, but the stake itself is made of metal. 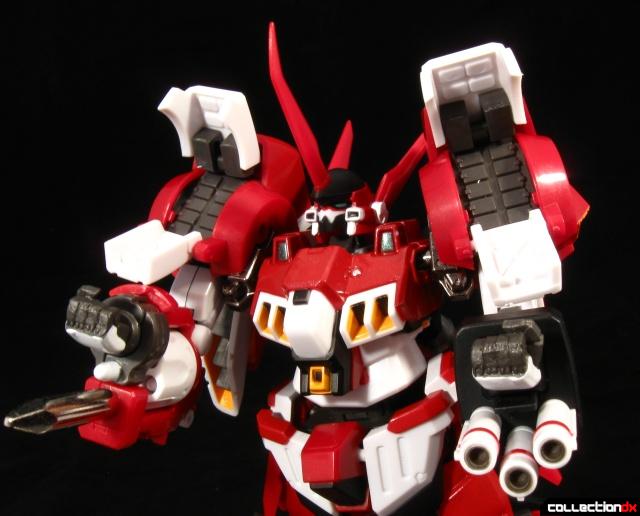 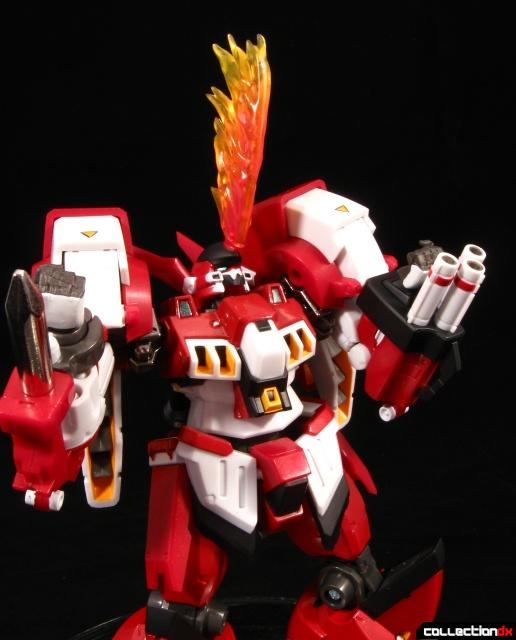 For effect parts, the toy comes with a flaming heat horn. 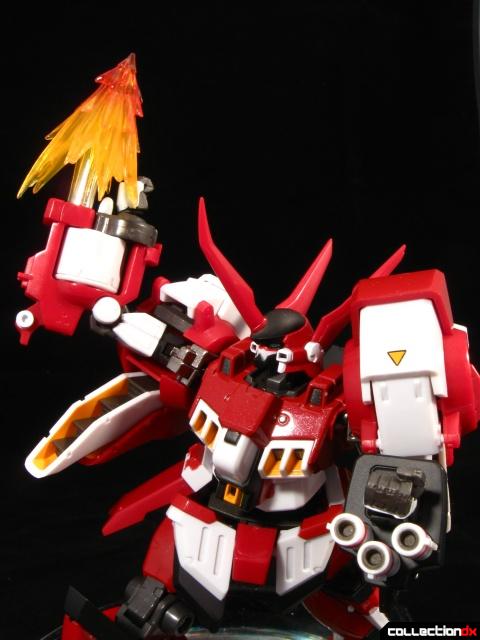 And a stake impact piece. 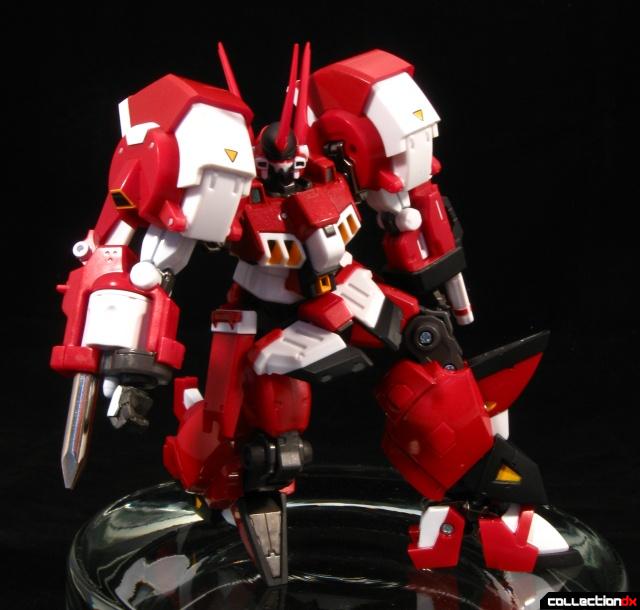 The toy has a lot of articulation with every joint feeling just right. 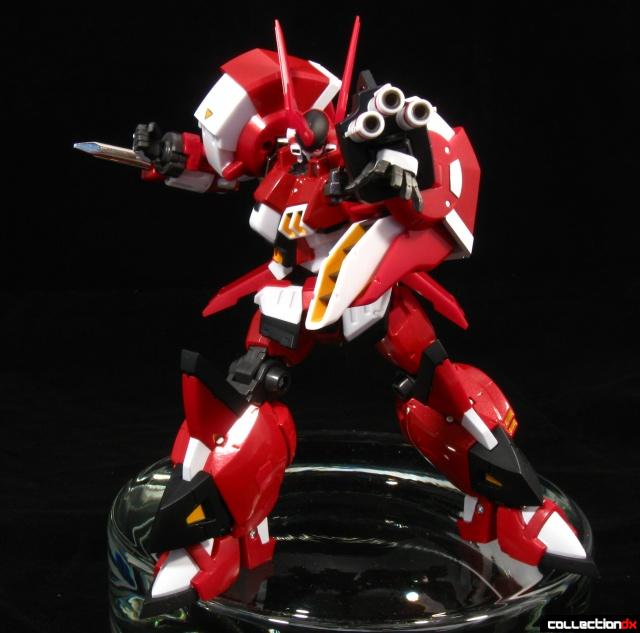 Most impressive is the waist joint which despite the blockiness of the Alteisen, can easily rotate left or right. 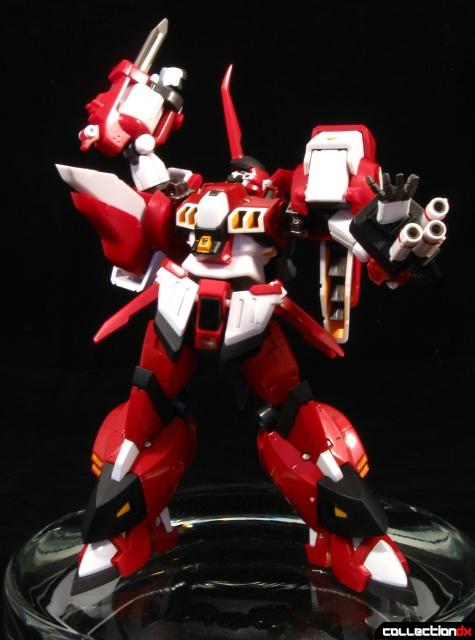 I have no complaints about this guy at all. It's in everything an Alteisen toy should be. 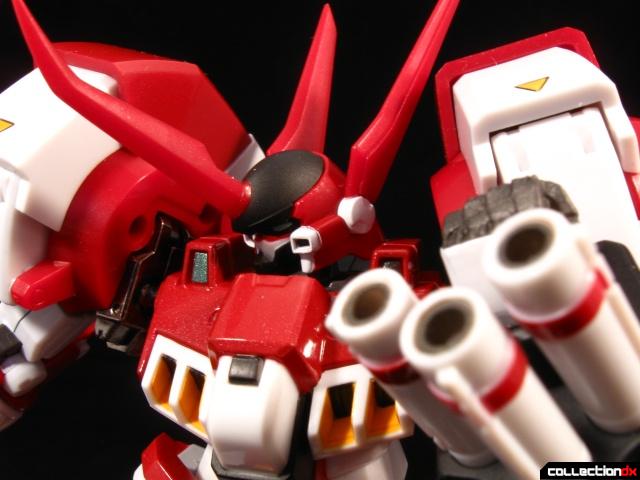 This Alteisen is an excellent representation of what Super Robot Chogokin has set out to achieve. A simple, solid figure with lots of articulation and the personality in its execution. This is easily the best Alteisen toy to date.

Awesome review, i hadn't even realized that any new super robots chogokins were released, any chance you'll review super robot chogokin Mazinger Z and Great Mazinger? they've been out for a while now.

I love this mech, and the price and size are right. Thanks for the review!

soc srx, the weiss, personleichkeit, and any angelg toy that isn't done by volks and both valsiones. damn, there are more mechs that haven't been released yet like the valzacard from super robot taisen w and vigora from super robot taisen z. i do hope bandai markets these as these are a hell lot easier to acquire than the volks releases.

It's good to hear that the Alteisen is a solid piece. I would love to have an R-Gun in this scale...

I picked up the Mazinger Z at the New York Comic con. Its cool as shit! I'm planning on picking more of them up. Solid toy line! Nice Review.

Awesome review. I'm still thinking whether to buy it or not for the simple reason that I'm into classic robots from the 70's and 80's + Evangelion!

in super robot taisen impact/ compact 2 the alteisen has teamed up with mazinger z, great mazinger, combattler v, mobile suit gundam from 0079 up to char's counterattack, getter robo, baikungfu and the like. so it would not look out of place along with it's partner machine weissritter. i promise you this look at the box art of super robot taisen impact and never look back.

Ok, so even though I like this character, I was going to pass, but after reading this review, I'm going to have to get it. I mean the stake is even metal, that's attention to detail. I'm afraid to break the joints on my Banpresto one so I leave it alone, but this will make an excellent replacement! Great review and photos

Posted by chachipower on 9 November, 2010 - 10:25
Differences with Banpresto and new Bandi Altesin

I want to buy this toy but I found a Banpresto one. Can someone please out line the differences between the two. This figure looks smaller than than the banpresto and the latter comes with an action bade and reloader as well it has some pretty cool gimmicks.
Can someone provide a comparison pic

I have both, I do plan on doing a reivew over at Robot Japan at some point but here are my thoughts for now.

Banpresto Altesin is actually the same exact height as Bandai's its just a lot more bulkier porpotion wise. I havent really studied pictures of how Altesin is suppose to be so im not sure which is more accurate but I like the look of Bandai's version much better (Tho I beleive that Banpresto is underneath Bandai to begin with.). However, Banpresto is more anime colored while the later is metalic red, it also has a few more details than bandai's but not by much

Banpresto has more diecast than the Bandai, its much heavier however that makes it a bit more wobbly. It definitely doesnt have the balance or strong joints like bandai (though the hip joints are rachted) . Ive had mine for over a year and no joints have become loose but I never touch the thing either, I think if you mess with it a lot the non-rachted joints may come loose over time. He still boasts a fair amount of articulation though not as much as bandai and cant do as many dynamic poses either.

One more thing (or rather two) Banpresto has two extra gimmicks not found in their sister's version. The revolving spike is spring loaded (it doesnt shoot out but pops out like a pen........when it works lol) and the shoulder launchers are spring loaded too when they open. Nifty lil features but nothing crazy.

Last but not least, I paid 70 plus shipping for the Banpresto version, I think it originally went for 80 and Bandais goes for around 60 (I got it for about 40 off of amiami tho) so It may still be the cheaper version. In any case, I am gonna sell off mine for about 40 if anyone is interested...

I also have both. Get the new Bandai one. Its overall better made. Less diecast and gimmicks, but overall much sturdier and quite a bit more poseable. The Banpresto/Unifive one has its charm with a bulkier look, has the matte paint job that matches the Volks/Dengeki Hobby figures better, and tons of ratchet joints all over. But as nice as having many ratchets, they wobble (but not floppy) a bit here and there when you hold the figure. If you already have the Banpresto one, then Bandai's is not a necessity upgrade to own. But if don't have any Alteisen figures at all, then Bandai's new version is a better deal. A little cheaper, and you get a more solidly made figure that can pull some crazy poses for a diecast toy, as long as you are willing to sacrifice spring load gimmicks & a bit of metal.

I have decided to get the new Bandai version and after reading the review of the 1/100 scale Koto Model which I have been ruminating to get . I wish Bandai made the size bigger so I got both. The Koto Version 1/100 is hard to find and is rare.

I bought this figure recently because of this review. Just saying.
Thanks guys!