Now let’s just get something out of the way right of the top – I’m relatively illiterate when it comes to the greater Godzilla-verse. I’ve only see the original Gojira and the ’98 U.S. fiasco in their entirety but have seen enough bits of the ‘classic’ films to have a working knowledge of the more well-known monsters (though I did watch Godzilla vs. Space-Godzilla and, of course, Godzilla vs. Destoroyah before getting these figures). I do, however, LOVE awesome toys and became quite smitten with this set upon its revelation. I’m a huge sucker crustaceans and crabby monsters plus with this line’s reputation I knew they’d be amazing toys too, so I was quite elated when Bluefin Distribution was kind enough to send along a set for review! 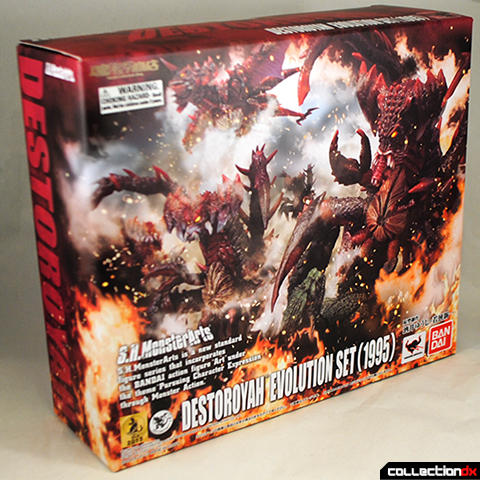 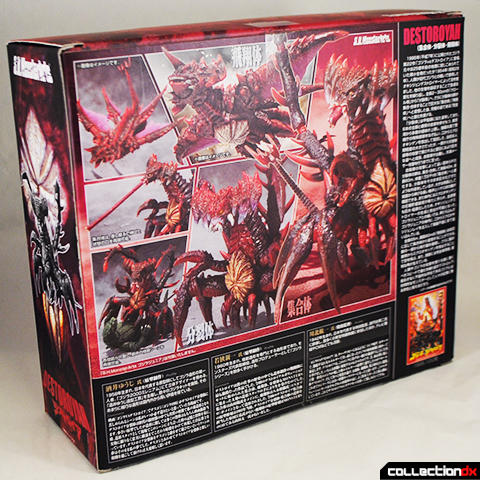 This set comes packed in a brown cardboard “mailer” with some generic stuff printed on the front. Within that, though, is the trademark glorious full-color box common to the line. Unlike most, if not all, previous releases, however, this one has no window to the product. Instead, we get a pretty nice photo of the three forms, though the additional elements like duplicate Aggregates and Godzilla Junior may lead to some misguided expectations of the contents. The back, however, sets things straight with more product-specific imagery. Inside we find the figures packed in a sturdy two-piece blister shell (complete with little trays to hold the Aggregate versions’ legs in place). 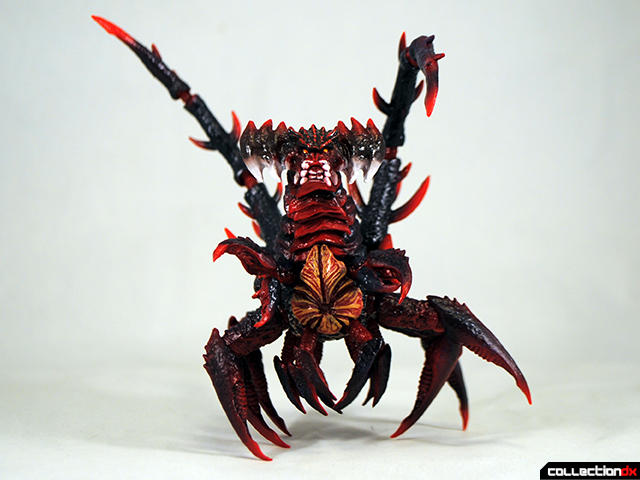 First up we have Destoroyah in his Aggregate form; so-called for the many Destroyers pooled their approximately seven-foot-tall bodies into this one large creature (clearly the filmmakers were fans of Bill and Ted’s Bogus Journey, though sadly Destoroyah does not have an excellently large Martian butt). Shinichi Wakasa sculpted this guy to utter perfection! Everything has a very nice level of detail and he’s coated in sharp points (a blessed change from the child-friendly US toys I’m used to). The paint is pretty clean and solid though is really is just shades of red for the most part.

The most impressive thing here, though, is the amount of articulation! By my count this figure has 70 points of articulation!!! This has got to be the most articulated figure I own, all the more impressive when one considers that he’s only about 3 three inches tall to the top of his head.

They did a great thing by making most every single point a ball-and-socket joint, so that there is a pretty decent range of motion across all of it. It is somewhat limited due to the size of the figure; for instance, the giant spin/pincer things can’t straighten out forward as in the film, but there is enough here that you’ll have some fun with the neck and legs. I do find that he can get a little front heavy, but again the ball joints in the six major (and the twelve minor) legs have enough range that you can find some balance. His neck is pretty good too with about the lower 60% being individual plates around an articulated skeleton creating a pretty neat and realistic effect. 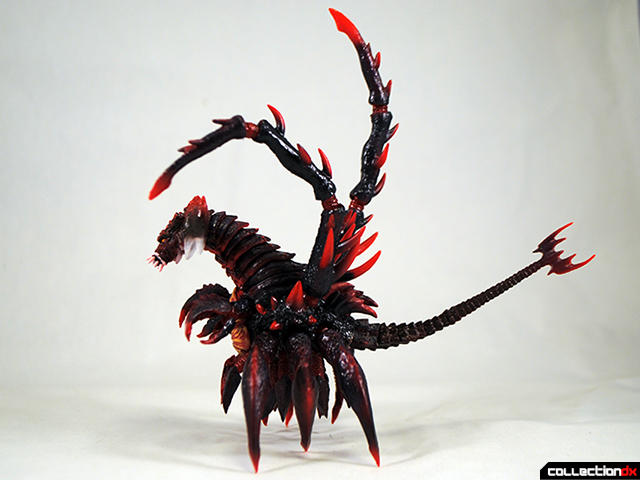 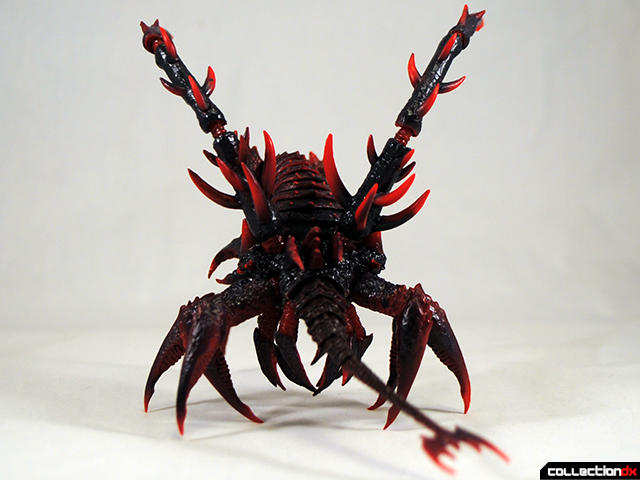 This guy’s mouth extends out a bit too, which I almost missed because you need to pop his head out and use a paperclip or spare Deadpool sword to push it out from the backside. He also comes with an alternate head with a super-extended “Alien” mouth that I’m pretty certain didn’t appear in the film, but I’m sure is an acceptable cheat for posing this guy laying the smack-down on the previously released Godzilla Junior figure. 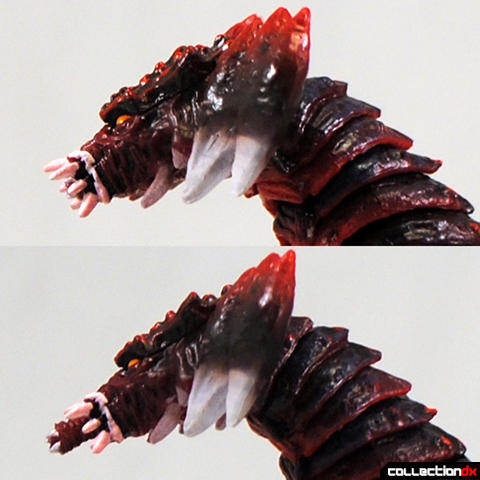 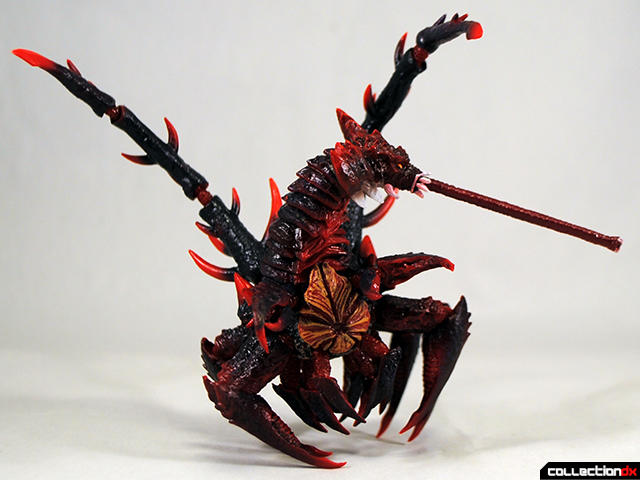 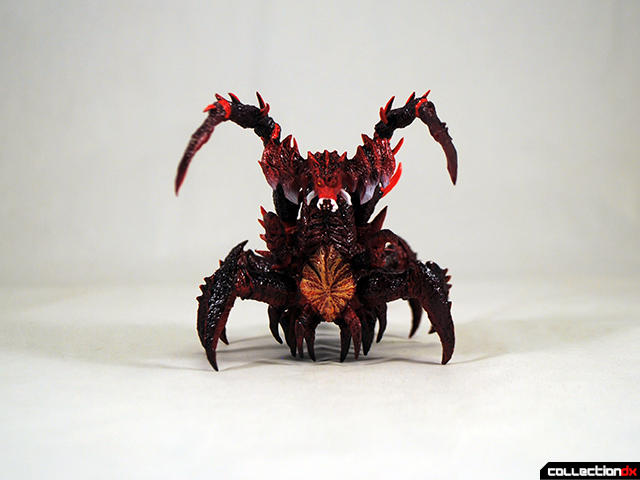 It took me almost the full duration of the film to figure out what this guy is. To the best of my knowledge, he is a re-scaled Aggregate Destoroyah to match the standard scale of Godzilla, so that you can recreate that one time a couple of these suckers crawled all over the big guy. Now, to my eyes they were the same design in the film, but different scales to match the different “man in suits” scales used for Godzilla Jr. and then the Big Guy himself. At first glance this Mini-Aggregate, as I’m calling him, looks the same as the ‘larger’ one but upon closer inspection there are several notable disparities, such as smaller claws, different ‘rump thorns,’ and six additional under-legs. Now, whether this is in fact legitimate differences in the two ‘costumes’ or stylistic interpretation by sculptor Yuji Sakai I do not know, but either way it is nice that each is unique.

In addition to being about ¾ of an inch shorter than the Aggregate, this guy gets significantly less articulation – 8 points only – and each is a simple swivel joint (the two center big legs, shoulders, pincers, rump thorns). Annoyingly, his large pincer arms pop out easily, and I’m finding nearly impossible to keep his (packaged separately) tail attached, as it falls off with the slightest touch. On the plus side, the paint is good and the sculpt is even most detailed. I prefer this more angular head to the one of the larger Aggregate. 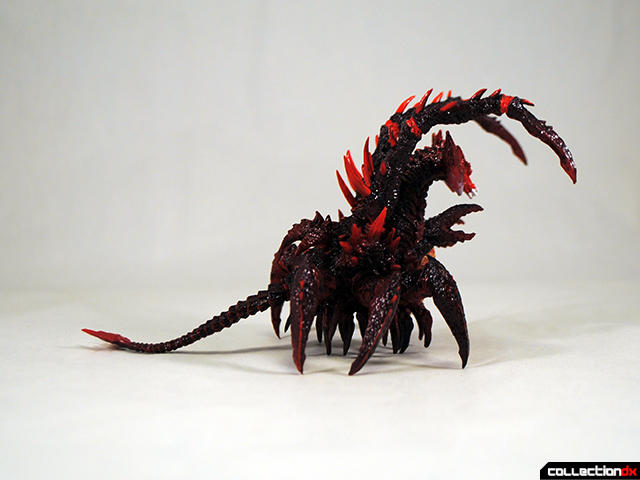 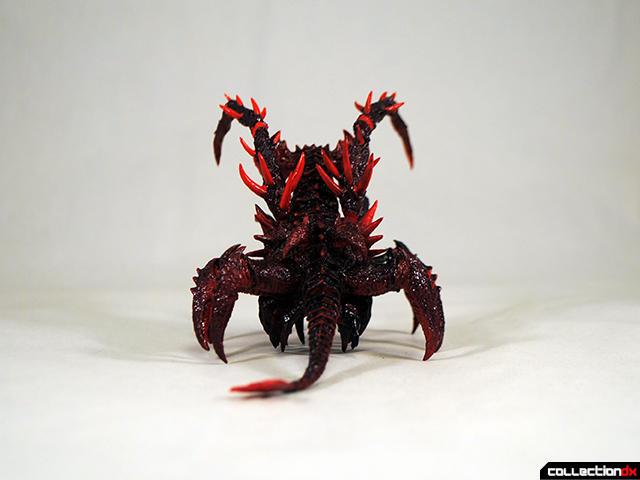 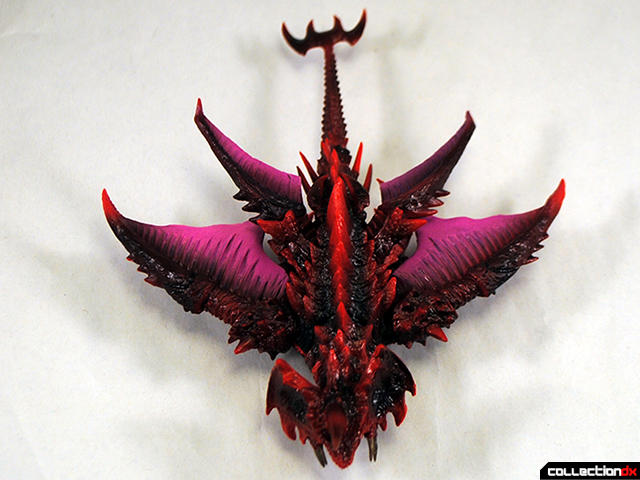 The Aggregate figures are nice and at all, but come on… it’s this Flying Form iteration that’s the real seller on this set! This is just one of those designs that’s totally hitting on all cylinders and tickles just about every monster fancy a boy can have. The sculpt, again by Shinichi Wakasa, is fantastic – beautifully detailed and it hides the articulation quite well. Speaking of which, there are about 22 points – again, astounding for a figure about 6.5 inches long with a wingspan of 6 inches - and again, they’re all ball-and-socket joints. The range of motion is fairly limited (particularly the crab legs) but what can you really do with such a compact design?

The wings have more range than I expected, particular in terms of backwards/forwards, and the neck and tail are wonderfully fluid pieces. Actually, my only complaint here is that while the first inch of the tail is individually articulated at each scale, the back 2 inches are a single solid piece rendering most poses unnatural. The paint is, again, pretty darn good and his horn is cast in translucent red-orange giving it a very cool look.

There is one very conspicuous omission here and that is the lack of a flight stand. I love this figure so much I don’t want to hold the no-stand against it, but really… you can’t do anything with this guy without one. As long as he’s in your hands its fine, and man is he just as much fun as any X-Wing or bomber jet, but there’s nothing you can do with him on the shelf really. 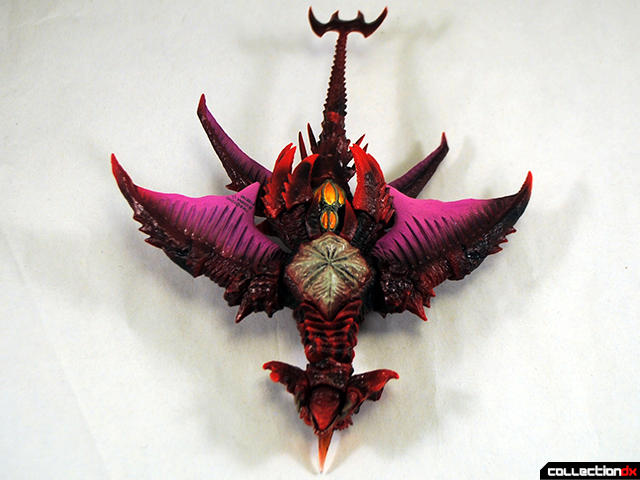 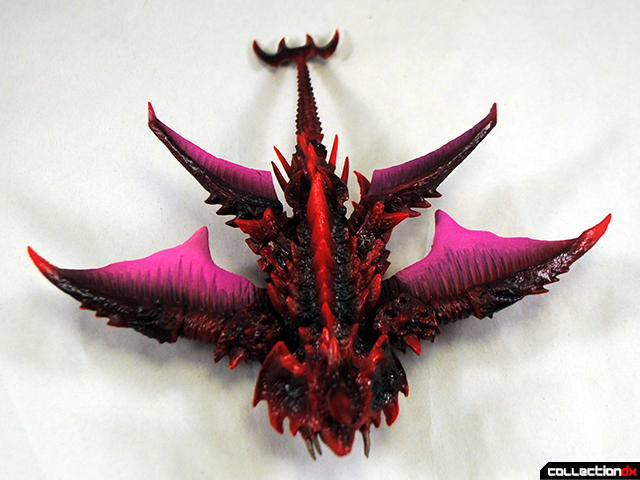 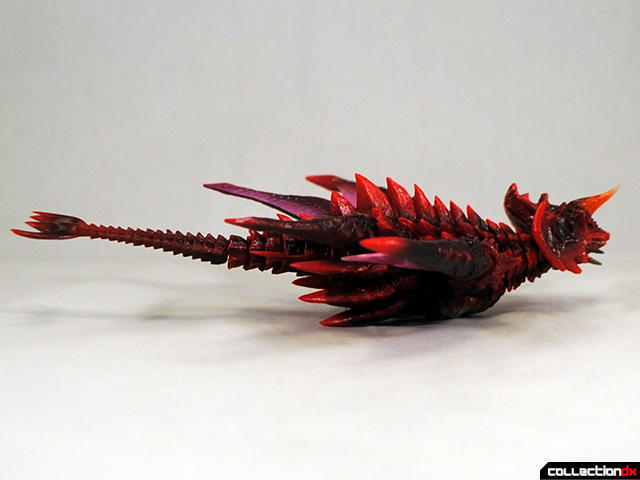 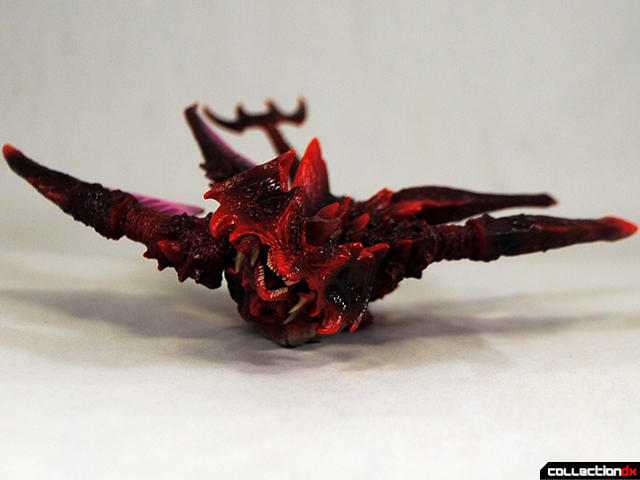 I like crab monsters and I LOVE the Flying Form so this set works wells for me. Like all of the S.H. Monster Arts figures, though, it does have one major Achilles heel and that’s the price. SRP for this set is $90. In all honesty, I just can’t see these being worth that much. It does help that you’re getting three toys, but the Mini-Aggregate really does feel like a bit of a cop-out since he’s so similar to the proper Aggregate. I think the smarter play would have been to leave out the Mini-Aggregate and shave $20-$30 dollars of the price tag and include a flight stand for the Flying Form. 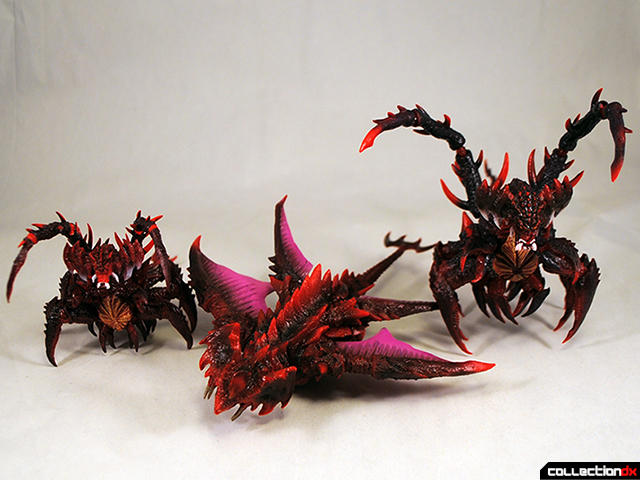 If anyone wants the Mini-Agg, they’ll probably want multiples of him, so it would have made more sense to sell him individually or perhaps in a comparable “Evolution Set B” with the ‘Juvenile Form’ in scale to their human figures – since both are troop builders it would be a great way to upsell. Unfortunately, Tamashii didn’t go that route. Add in shipping and tax and you’re talking $100+. That’s a steep price for a non-“regular” form of a Kaiju (i.e. proper man-in-suit).

But these are great figures, and they do play a significant role in one of the most memorable films of the Heisei era of Godzilla. Plus, with all of the articulation, they are fun to play with (despite the aforementioned stability and easy-pop-off issues). As a more casual G-fan, I would not have bought these on my own, but now that I have and enjoy them so much I’m essentially resolved to get a Godzilla Junior for them to battle. I’m even damn tempted to get a Burning Godzilla, too (especially since he looks so awesome)!

On its own, this set is at best “better than it should be,” but when placed alongside other figures in the line, it strikes me as an (admittedly expensive) home run. 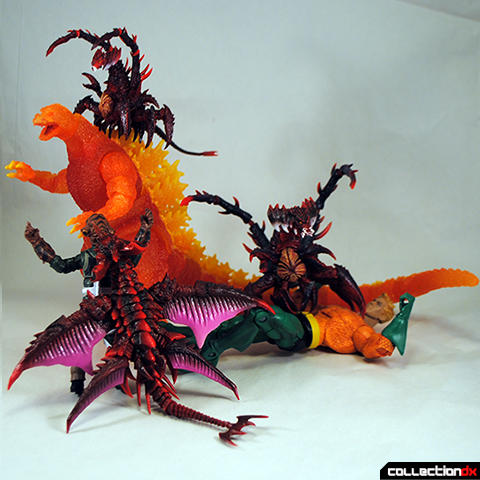 2 comments posted
Destoryah was one evil

I need some drawn butter.