Mech iDeas' Demolition Crüe comes courtesy of Big Bad Toy Store.  Make sure to check out VF5SS's review of the other half, Apex.

Mech iDeas is a newcomer to the third party Transformers scene, but they have started off strong.  After starting off safe with a small upgrade set, Mech iDeas went straight for the kill with not one, but two complete figures.  Not only has Mech iDeas successfully designed, produced, and released two complete figures, but they have made an admirable attempt at something I thought impossible: they made the Jumpstarters cool again. 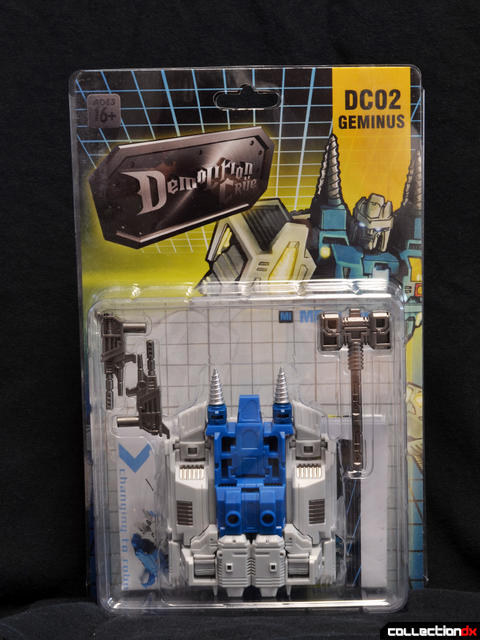 Geminus is one half of Mech iDeas' Demolition Crüe, based on the Jumpstarter Twin Twist.  Geminus comes packed in a blister with a nice looking backer card.  That's 'Crue' with an umlaut, like in 'Motley Crüe', which I think is really funny.  The lean packaging looks great, eschewing flashy presentation to instead focus on the cool toy. 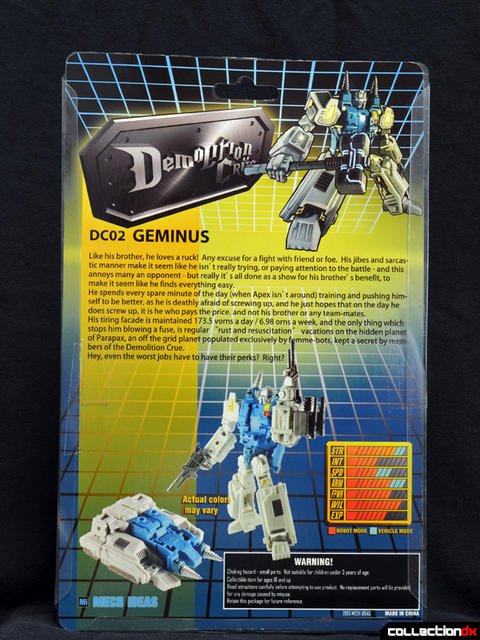 The back is a nice nod to the G1 Transformer packaging style without being a direct rip-off.  Geminus' profile features some fantastically bad Engrish. 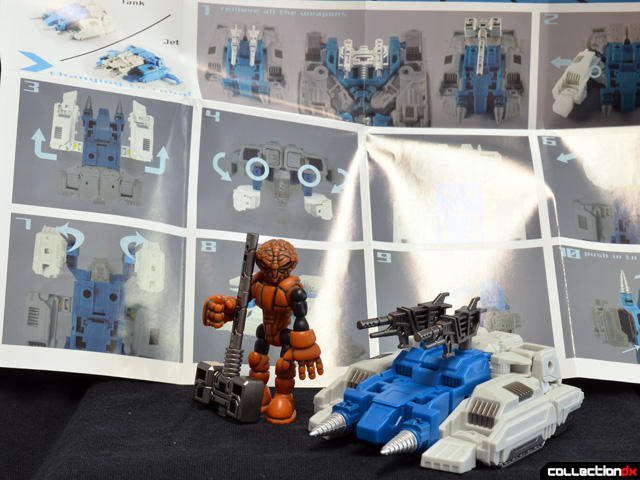 The instructions are printed in full color and are very easy to follow.  Included with Geminus are two pistols and a three-part hammer.

For details of the transformation and some more of my thoughts on the toy, make sure to check out my HD video review! 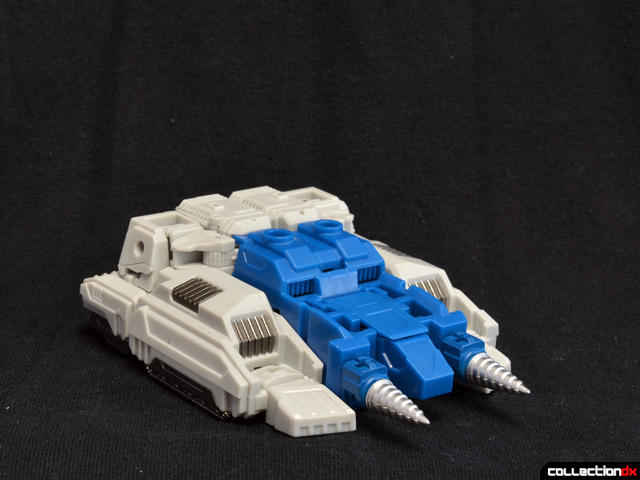 Geminus' vehicle mode is a chunky little tank with twin silver drills on the front.  Everything tabs and locks together so the tank is solid and fun.  The plastic feels great and the little paint that is present is perfectly applied.  The whole thing is a very clean and professional little package of transforming fun. 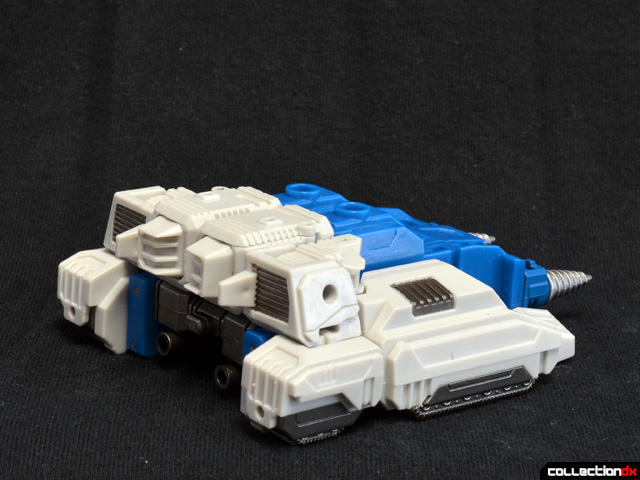 From the rear the engine block and exhausts are visible.  These parts are actually the hammer transformed into a great use for an accessory.  The only problem I have is that there are no wheels under the treads, so Geminus does not roll on the table.  It's a tragic missed opportunity. 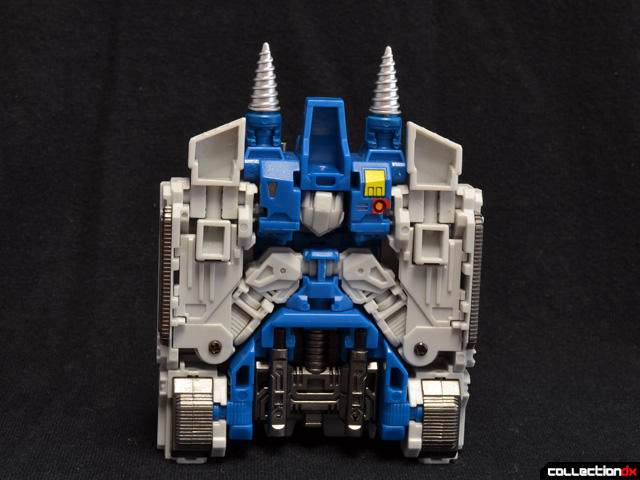 From the underside, we can make out some of how Geminus transforms, as well as see how the hammer parts mount as the engine.  It is a pretty clean vehicle underside that does not give away all the transformation's tricks. 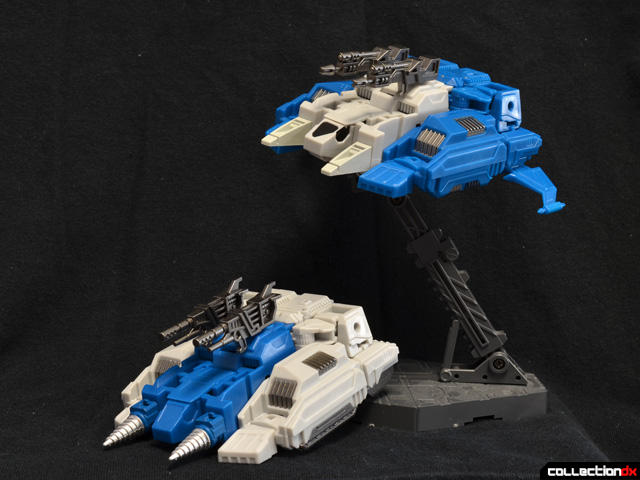 VF5SS is covering Apex in his own review as the premier CollectionDX flying vehicle expert, but I wanted to show off how great the pair look together.  Apex and Geminus are mostly the same mold with a few different parts to make one into a tank and the other into a jet, but that makes them a great, cohesive pair. 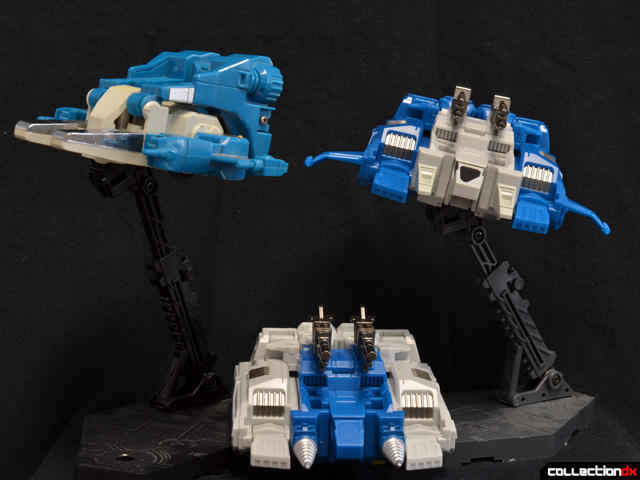 Putting the Demolition Crüe alongside an original Jumpstarter shows off how the vehicle modes pay tribute to the original without being slavish.  I like this approach much better than striving to be just like the original vintage figure, warts and all. 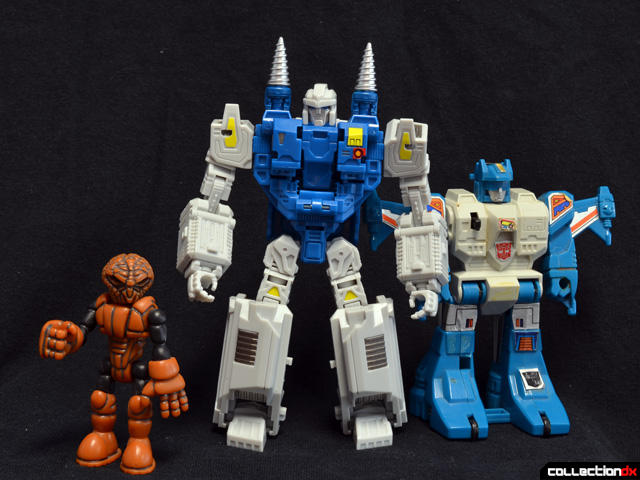 Transformed, Geminus stands much taller than his G1 counterparts, but is still a compact little robot figure.  You'll notice throughout the robot mode figures that I tried the elbows rotated around both ways.  In the image above I do not have the elbows transformed according to the instructions.  I tried both ways, but the arms seemed a little long and noodley to me regardless of how I transformed Geminus. 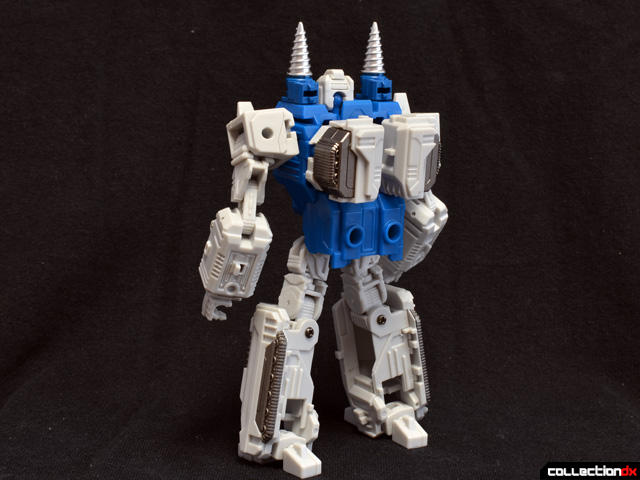 Geminus's back is nice and clean, with just the smaller tread units loosely forming a backpack. 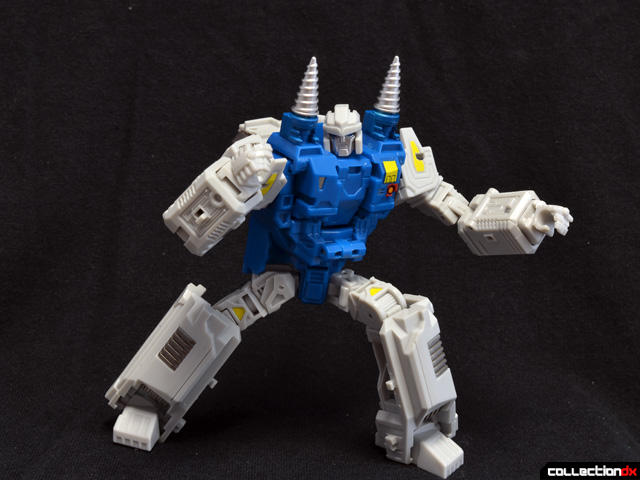 Articulation is great.  The knees are a bit limited, but everything else is quite mobile, including some fantastic shoulders.  The ankles move forwards and backwards and feature a rocker joint. 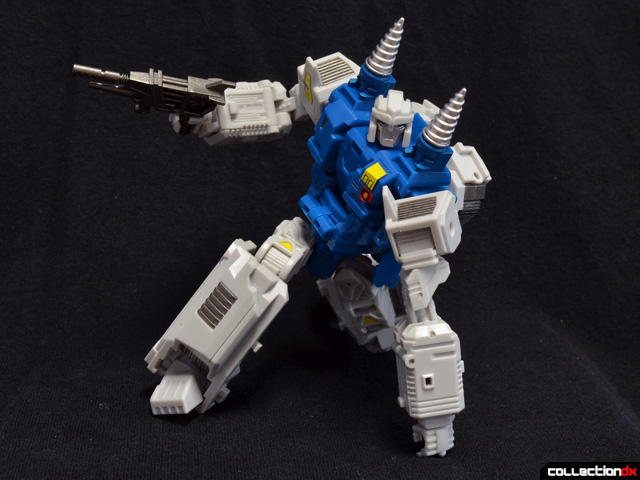 Geminus can even make a competent go at the Iron Man movie poster pose! 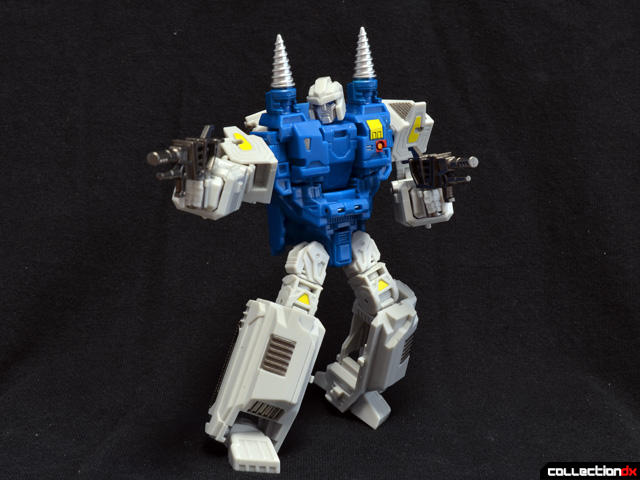 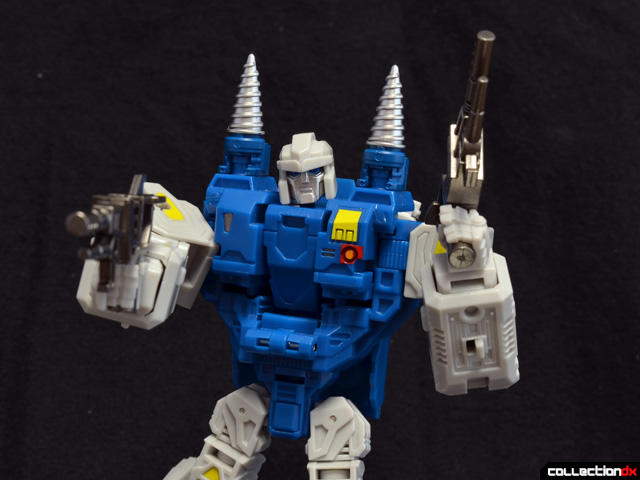 Geminus has a great combination of looks and motion that make for a wonderful little package of chunky robot goodness. 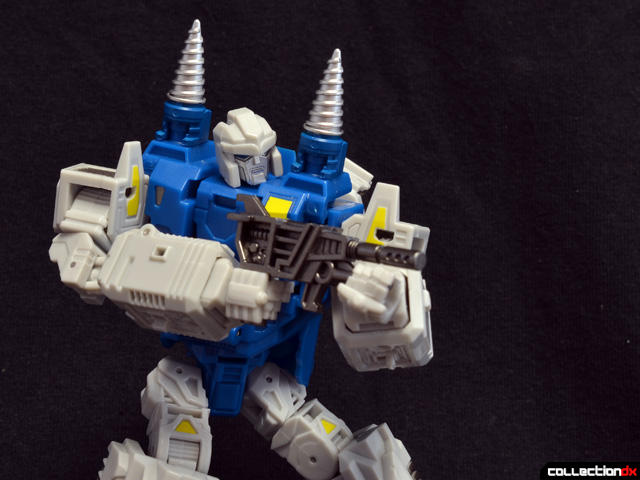 Thanks to the extra joints in the shoulder for transformation, Geminus can even get a two-handed grip on his gun. 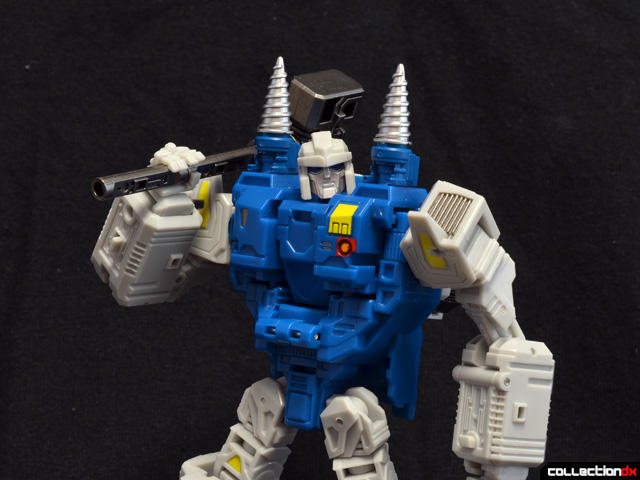 The pistols are cool, but the best accessory is the hammer.  Hammers are always best. 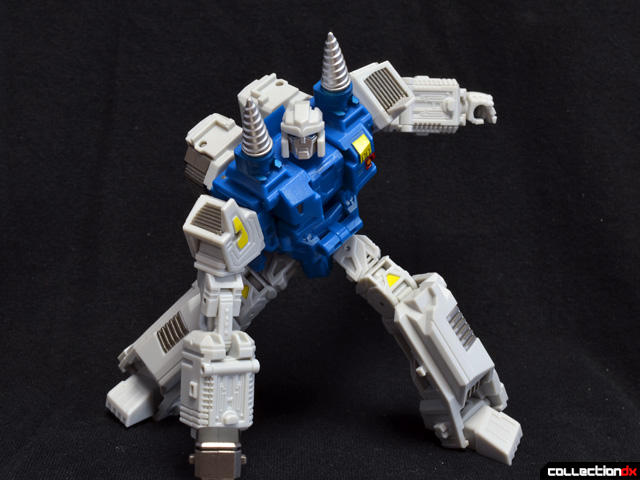 In Transformers comics, Top Spin and Twin Twist join up with the Wreckers, the Autobots' wet works team.  The Wreckers are used as an excuse to try and make goofy old toys like the Jumpstarters and the Triple-changers into cool action characters. 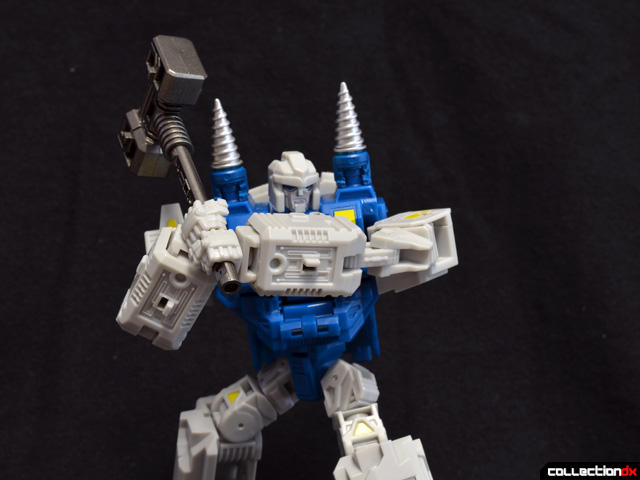 The hammers are a fun nod to the Jumpstarters' career with the Wreckers.  Equipped with the proper equipment, Geminus is a one-bot wrecking crew. 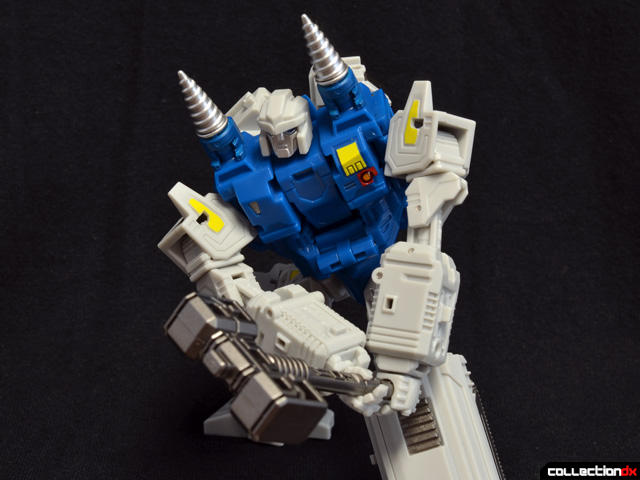 I might have gone a bit overboard taking cool hammer pose photos, but I could not help myself.  Everything about this guy is good clean fun. 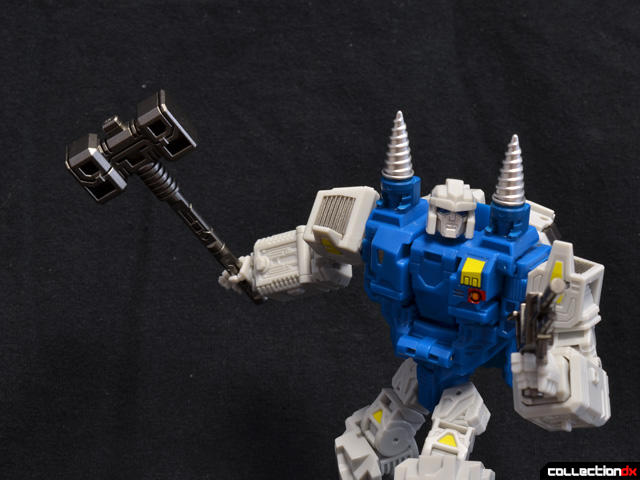 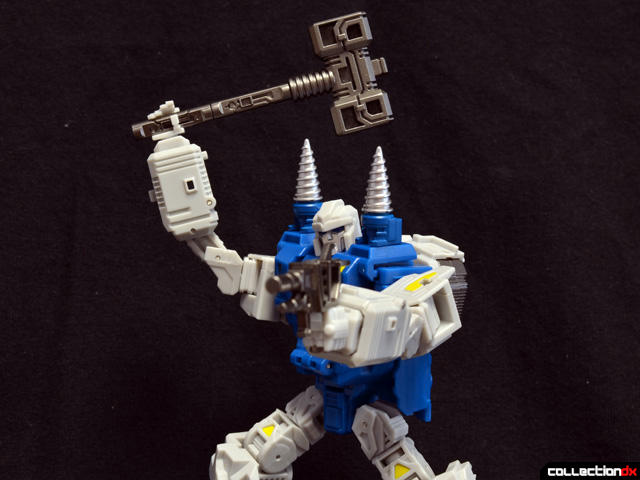 Seriously, this guy is awesome. 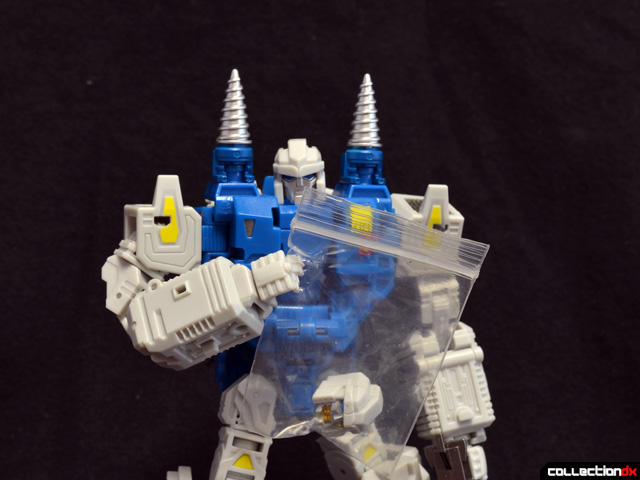 Mech iDeas included a cool little bonus for people who preordered the pair, a battle damaged head for Geminus. 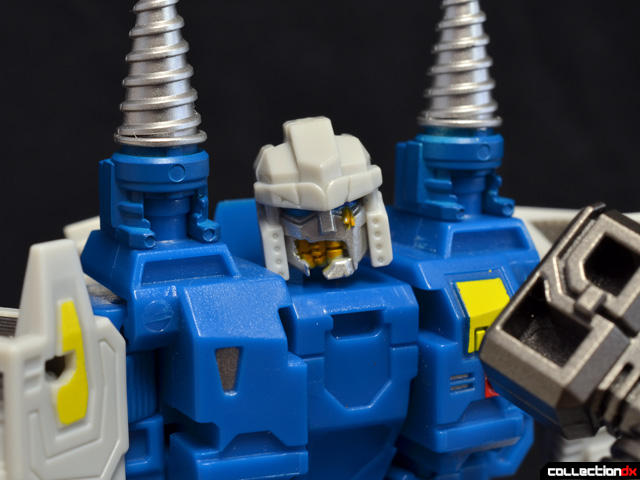 The colors on the damaged head look a bit like Geminus had a nasty encounter with a bottle of mustard, but the sculpted details are pretty good. 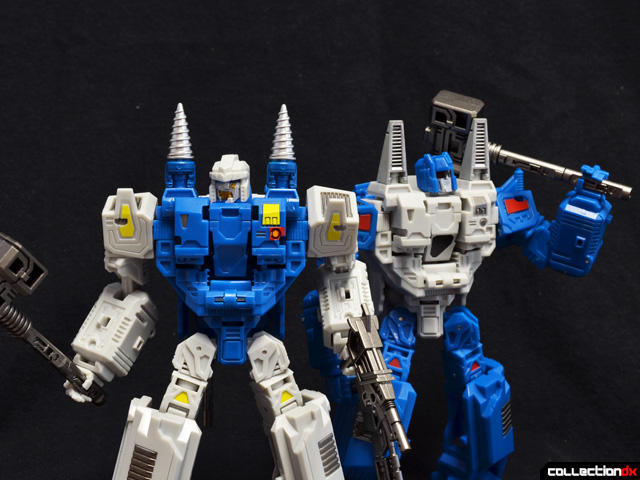 One Demolition Crüe figure is nice, but you really need the pair for the most blocky hammer-wielding fun.  The swapped color distribution and character specific details make for a pair of figures that feel distinct but clearly go together. 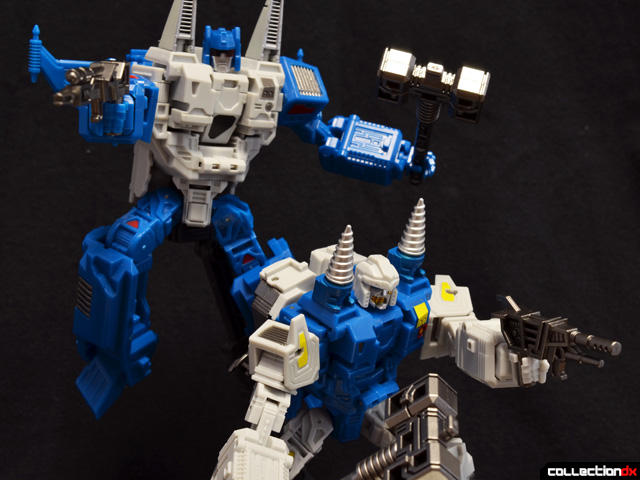 Together, the Demolition Crüe is mean and ready for business.  Hammers and guns make for all kinds of fun. 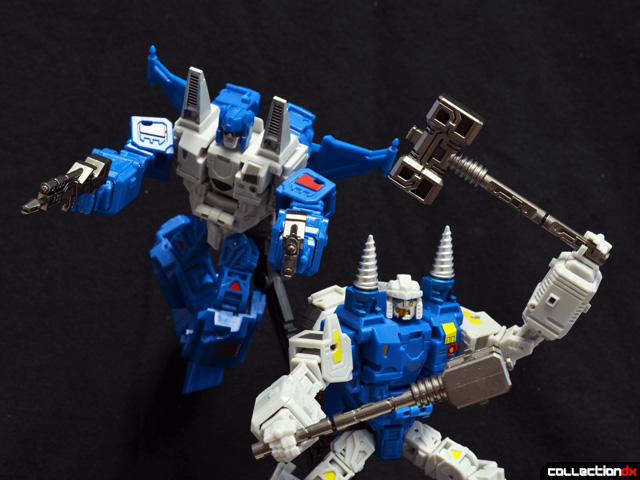 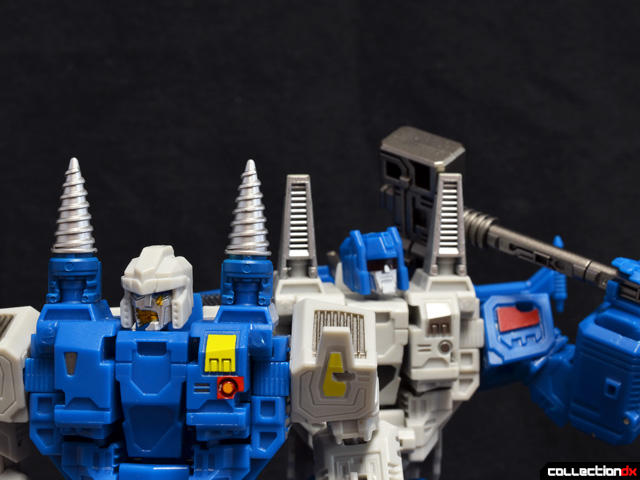 The last thing to mention is the price.  Each Demolition Crüe member retails for just $37.99 from Big Bad Toy Store.  That is a STEAL for how nice these guys are.  The pair sells for $69.99 and is absolutely the way to go.  The original Jumpstarters get a bad rap based on the fact that they were hot trash as transforming robot toy.  Mech iDeas has taken just enough key design elements and modernized some lousy old toys into wonderful new figures that surpass the toys they are based on in every way except bouncing along the floor and landing on their dumb faces trying to transform.

That damaged head is a nice nod to Last Stand of the Wreckers...