Where there’s Ravage, you can be sure that Soundwave is not far behind. In this case, by “not far” we mean “in orbit around the planet”. 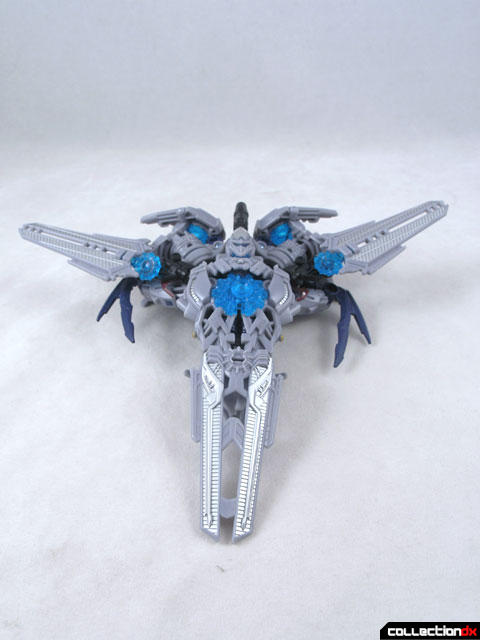 In Michael Bay’s “Transformers: Revenge of the Fallen”, Soundwave takes the form of a communications satellite, monitoring all transmissions on earth. When the signal is given, Soundwave launches Ravage down to earth to retrieve a shard of the Allspark. 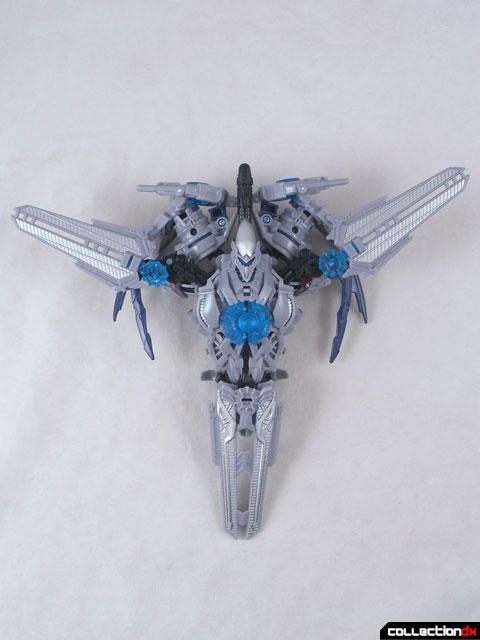 In the movie, Soundwave gets hardly any screen time – just the one scene I think. He’s shown floating in space in satellite mode, so you never get the change to see his alternate mode. 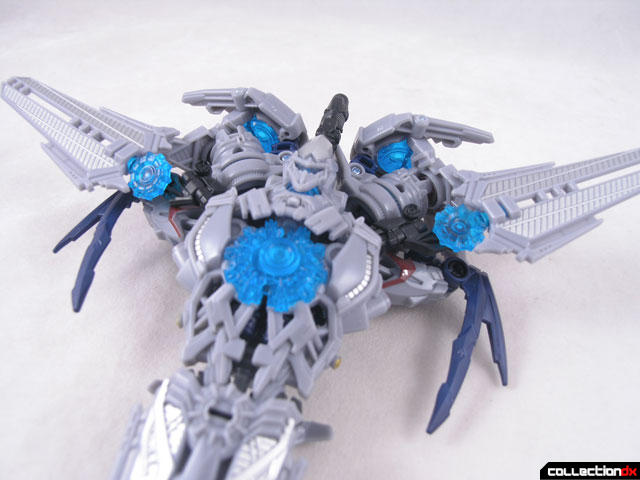 While Soundwave looks kind of cool in the movie, the toy just looks like crap all around. There are few redeeming qualities. 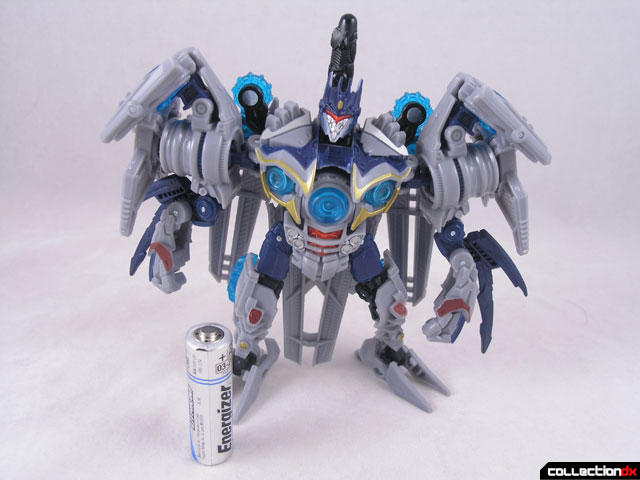 Soundwave is marketed as a triple changer. He’s a Transformer, so he’s got to transform into something, so he has the default robot mode. But he also has a third form. Back in the G1 days, Triple Changers were probably the most innovative of transformers. They really did look like three distinct forms, with some remarkable engineering. Not so with this toy. The only difference between the first and second alt mode is the positioning of the wings. Spy Satellite becomes Cybertron Jet with hardly a change. 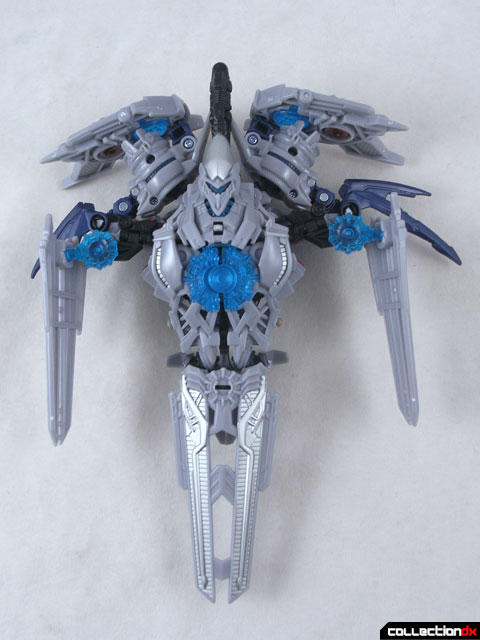 Construction is fine – typical build quality and materials for a Transformer of this era, but I found the color choices to be rather boring. The toy seems unfinished, lacking detail. I do like the use of translucent parts, and I like the circular speakers all on the figure. I also have to give them credit for including a firing missile. 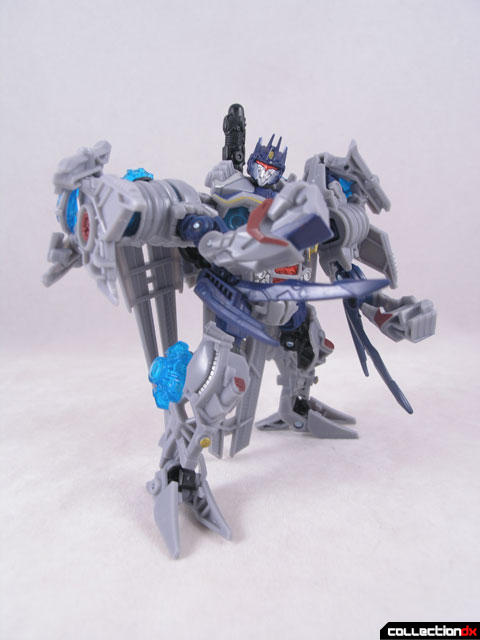 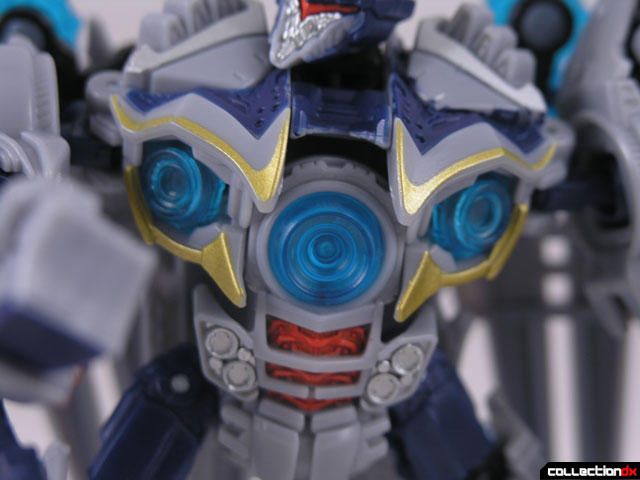 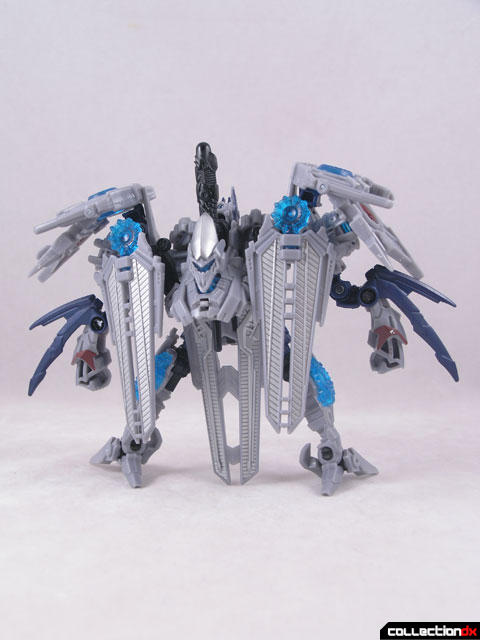 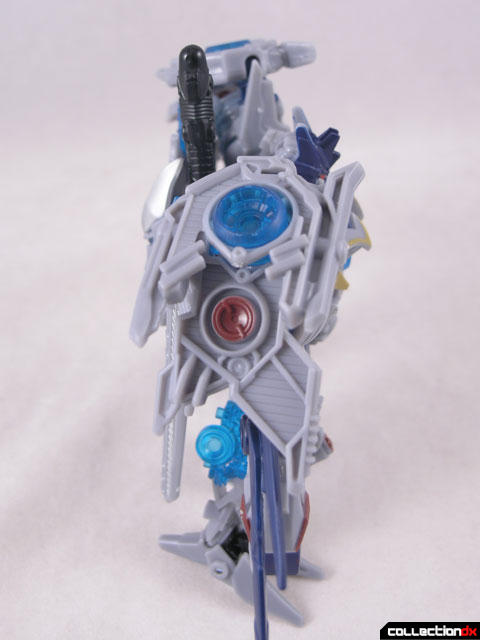 The missile is neat, not just because it fires, but because it’s actually in the shape of Ravage as it is launched from space - a neat little touch. 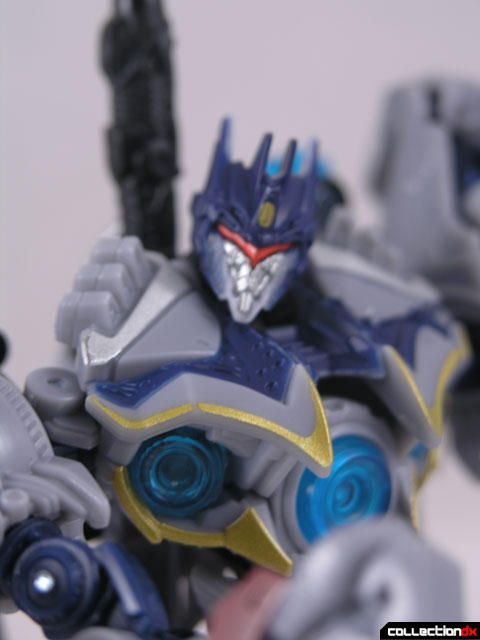 I knew this toy was going to suck when I bought it. My son picked it out at Target, and I make it a point to not influence his decisions with toys, so I bought it for him. He then wanted me to transform it for him. He had no idea what it was supposed to be. He played with it for a little bit, and then off to the toybox it went. It was only just recently while cleaning the playroom that I came across it, looking as if it were just opened, barely played with. I figured I’d review it, for posterity’s sake, and then get rid of it. 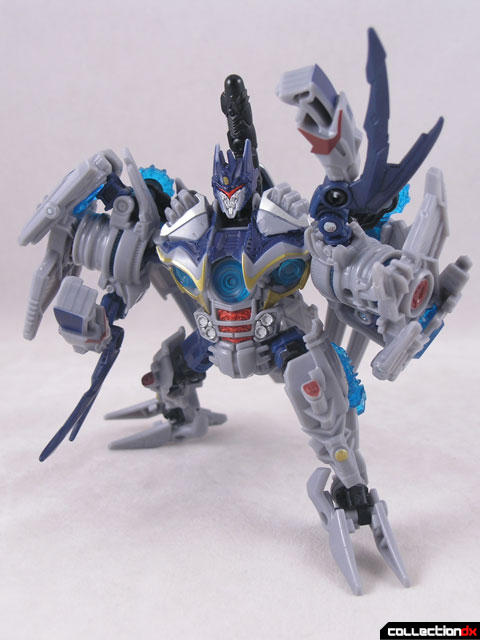 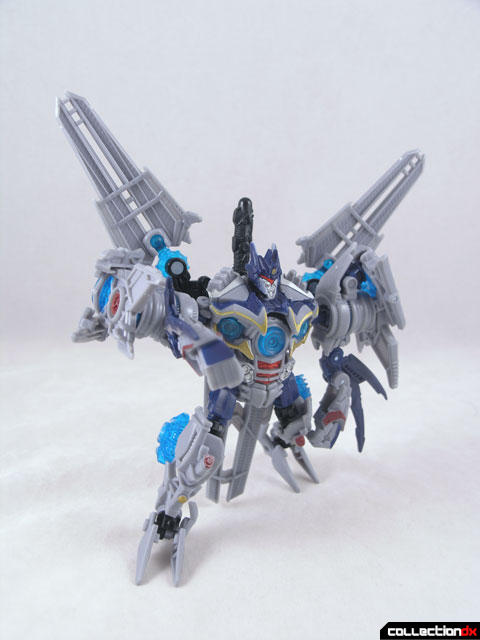 My son saw it out being ready to be shot, and he took interest in it again, so I let him take a couple pictures, and off he went with it. Who knows where it is now? 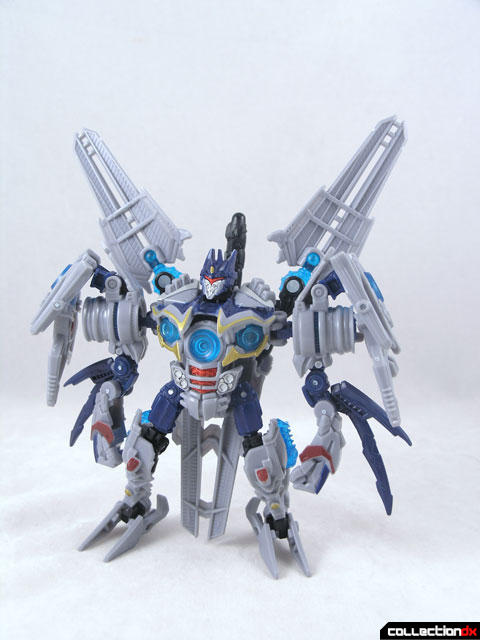 12 comments posted
If only his legs were

If only his legs were longer, then it wouldn't have a gorilla look.

Soundwave is a tough G1 Transformer to update. Still, I think the best update was the Cybertron version (the one that turned into a Jet and had Laserbeak as an engine).

Agreed- I've got Cybertron Soundwave, and despite a finicky transformation and some weak posing joints, he's a pretty good reinterpretation of the G1 character, as well as a kick-ass stand-alone.

"Soundwave is a tough G1 Transformer to update. Still, I think the best update was the Cybertron version (the one that turned into a Jet and had Laserbeak as an engine)."

If this isn't a joke, then you're missing everything this toy multi-series has been offering so far. More west but less east on your side of attention.

i just got the infiltration soundwave vs battlefield bumblebee for my birthday i actually like him he has alot of difrent ways to put his kible in robot and the 2 alt modes (satilite & cybertronian jet). he also has a few other modes which you can find on youtube. i also prefer infiltration soundwave because of the coulours ;D

...because it's not a proper representation of him. Yeah, the Satellite Mode is, but like Ravage and Scorponok, all their alt modes are stupid because they never appear in the films, and TakaraTomy did a p*ss-poor job of coming up with them.

As with many of the Bayformers, I really like what they did to Soundwave for the film, but I can wait for the next toy in 2012 which will then have a proper alt mode that is actually seen in the film, and- hopefully- will be a bigger toy as well.

I'm glad you're enjoying this line-up sir, but playing with my new TWFC Bumblebee tomorrow will make me forget everything you said about Bayformers. Doing yoga practices everyday to balance my patience for the Cybertron War game has finally paid off.

People either love Bayformers or they hate Bayformers. There seems to be no in-between.

You're one of the haters. I understand that. =)

Yep. Guilty as charged sir. ;) But I have good, logical reasons for hating it. The thing is I don't believe it's fair that the same writers who did 2 BF movies were fair to one sci-fi franchise like Star Trek, but were against another which is TF as far as asthetics & storytelling were concerned. That makes no sense to me. I agree with what Veef, Sanjeev, & Jermey said. If the movie toyline went into the direction of something like Iron Man, or the Star Wars movies (basically which the G1 movie really was...the narrator was incredibly honest about that), or The War for Cybertron in which I'm dying to play, then we wouldn't have this kind of drama sir. That's all I'm saying here.

In any case, I'm sorry that I'm a hater. I just hate incompetence & nepotism in a toyline that's been gratiuiously mishandled by hacks.

Please try to understand, I don't hate change. I believe in change sir, but I hate change when it's forced or misused & abused. Change must be made naturally, it cannot be made mechanically. That's what my Philosophy 101 professor used to tell me.

In any case, there's one RotF toy that I really like & that's Mindwipe. That's one of few robots that doesn't look cheesy or being rushed. It looked & felt like a cool Japanese mecha. I wasn't too sure to get one until your awesome review proved otherwise. So yeah, I've enjoyed Mindwipe a lot...it's one of the few toys that made me stay far away from those trashy movies & more into the real, responsible G1 modern route that kids & families could play together while being smart.

So look on the bright side, you've convinced this hater to buy a RotF toy that I love to keep. It looks good together w/ my TWFC Bumblebee.

Oh- I said nothing about story lines, plots, etc. of Bayformers; that's a whole other argument... No, I was talking strictly about the design of the robots and what/how they transform. I like how Bayformers LOOK on-screen, not how they're represented.

Eh, I liked this toy. That's 'cause I'm a robot fan before I'm a Transformers fan, though. I tried to transform him, but I never got to the final "satalite" look, so I ended up shifting him around a bunch and got a few different "side scrolling shooter" type ships that I was happy with. I had a good time making up my own transformations.

I got Soundwave yesterday. While I agree the alt modes don't look like much, it having so many joints leads to a nice articulated figure that has room for your to create your own alt mode. Basically, an "inkblot" toy. I made a scorpion mode so far.