Early on, Sideways found that he wasn’t a very good fighter. He didn’t have the programming for it or the confidence. Thus he was relegated to the relative safety of running back and forth between the front lines and the command centers much further from the shooting, carrying messages and other useful items. Despite wielding sufficient close-range weaponry like dual buzz saws in his hands and a flame launcher, his leaders saw no potential in Sideways, and that suited him just fine. Indeed, he excelled at running- speed was his greatest ally, as was evasion and hiding because you never knew when Autobot spies would get through and try to take whatever he was trying to carry. He was ordered to Earth to assist in finding the Matrix of Leadership, but he found it more adequate to hide in the shadow of the far-larger Demolishor as they traveled across this primitive planet. Unfortunately, no sooner had the two arrived when they were almost immediately targeted by N.E.S.T. forces, and met their collective untimely demises as the Autobots swarmed them in Shanghai, China… with Sideways having never fired a shot or swung a fist in defense of himself as he fled. In “Transformers: Revenge of the Fallen”, Decepticon Sideways does not speak in either an Earthly or his native Cybertronian language. 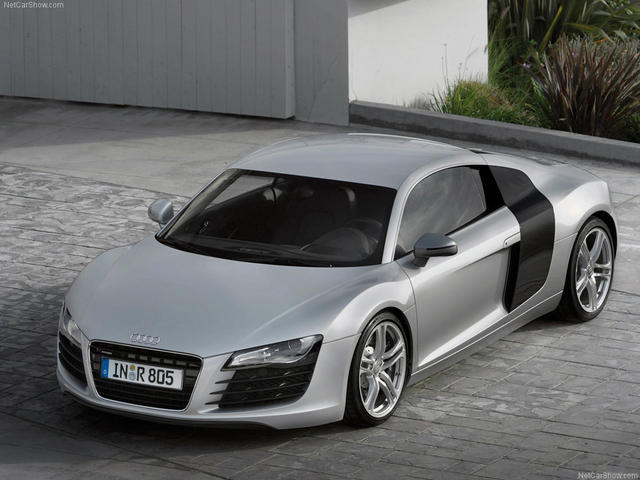 In the movie, Sideways’ Vehicle Mode is based on a real Audi R8 (the only car used in the film not produced by General Motors, by the way). However, because Hasbro and TakaraTomy did not secure the rights to the trademark, the toy’s Vehicle Mode intentionally only vaguely resembles the R8.

The main gimmick for all of the fully-transformable figures from the 2007 “Transformers” toy line was Automorph Technology™: as one part of the toy was being moved, another section would activate and move by itself via internal gears, springs, and levers. (Usually this applied only going in one direction for transformation but not the other.) For the 2009 “Transformers- Revenge of the Fallen” toy line, the Automorph feature has been replaced with Mech Alive, which is not involved in transforming the toys. Rather it is a gimmick that functions only in robot mode to better imitate, in some fashion, the intricate movements and mechanics of the immensely-more complex CGI character(s). Some figures are being reissued from the 2007 line since no significant changes were made to the character in that time-span, and will still include their original Automorph feature, but not the newer Mech Alive feature because they were manufactured two years previously. So far as I am aware, the Deluxe-class Decepticon Sideways toy is the only one in the entire “Transformers: Revenge of the Fallen” line to incorporate both Mech Alive (in the arms) and an Automorph Technology feature (stomach panel flips downward, front wheels flip inwards) in the same figure!

It is reported that Sideways underwent a design change during production by the filmmakers, which moved his front wheels to become his hands. However, because the toy had already been largely completed, a last-minute minor alteration was made to incorporate false wheels onto his hands. The designers at TakaraTomy have stated that, had they more time before production began, the transformation would have used the real wheels (which are now stored inside his torso) on his hands rather than the false ones. The wheel on his left hand can spin freely, as can the circular saw blade on the right hand.

Mech Alive is a special feature included in almost all transformable figures from “Transformers- Revenge of the Fallen”. In robot mode, specific parts of the figure’s body can be animated beyond simply posing it- panels shift, gears spin, and in some cases there is light-and sound tied in. This brings out a new level of detail to try matching-up against the immensely-complex designs of the computer-generated characters seen in the movie. For the Deluxe-class Decepticon Sideways toy, it has one Mech Alive feature:

As explained above, because of the late addition of the false wheels to Sideways’ hands, the originally-planned movable hands were made solid (in the film, his hands are the wheels), and the Mech Alive that was to be featured inside his forearms as well was removed. (While it can be easily seen in-person, it's too subtle a movement to be noticed in two photos side-by-side, so I didn't take them at all.)

Like several other characters in the movie, Sideways got very little screen-time. No chance to see what he was capable of… other than running from fembots. We only know that he is a complete and total coward despite working for the aggressive Decepticons. We see his robot mode for about 3 seconds and that’s it, and it’s was nighttime and he was running when he was. Because of this, it is flat-out impossible to compare the toy to how he appears in the film. And seeing as he met an untimely demise, future sightings are far-less than likely. In fact, the image you see below is really the only promotional picture we have of the character outside of the film… and- after careful study- I have decided that it actually is the CGI model from the “Transformers: Revenge of the Fallen” video game rather than a promotional image from the film! And so because of these two major issues, it is not likely that this toy is a good representation of his robot mode, and many of the details should be taken with a large grain of salt. Well, at least we got some good angles of that silver Audi R8 blazing through the streets of Shanghai at night, right…?

Because of how the side windows hang above his head, the general shape of his face, the three-joint legs, the shape of his feet, and the buzz-saw hands, many originally though this toy was an updated version of Deluxe-class Decepticon Barricade from the 2007 line. (Having it in my hands, I can’t say I blame them for thinking that, despite different coloring and that the box gives a different name.) That being said, I don’t find this toy to be any better or worse than any other Deluxe-class figure. Good articulation in the arms, though the doors on his shoulders hamper the extra motion of the arms moving backwards at times. The light piping in the head is fine (though I wish his eyes were more red than pink), as is the ball-and-socket join in the neck. The Mech Alive feature is fine compared to others, but what blew me away was how pressing the grille on his chest inwards activated an Automorph gimmick, which was not advertised! Am I bummed out that the wheels on his hands aren’t functional in Vehicle Mode? No, because one of them gets to be the circular saw that a tire tread could never hope to be. (It’s certainly better than what we got on Barricade, and he had the same kinds of hands/claws!) A lot of people complain that his feet are too small, and I agree there, though it doesn’t make posing impossible. And, yes, those black panels are supposed to hang down below his knees like that rather than against his lower legs. One thing I wish it could have done, though, was push those headlights a little higher on his shoulders like they are in the [video game]. I also didn't like how the side windows can actually separate quite easily because of how they transform at that joint. (Another last-minute change? Maybe...) While Vehicle Mode obviously got the majority of paint apps, more was needed on his arms and legs. And what’s up with making his lower torso and ankles red- was Hasbro getting tired of the bland color pallets that Bayformers have on-screen? (I’m not complaining about the choice of colors, mind you, just where they placed them.)

Like Deluxe-class Autobot Jolt, I feel that the Deluxe-class Decepticon Sideways gets a bad rap just because he got so little screen-time, while it actually isn’t any worse-off than any other figure of comparable size and function.

6 comments posted
no thanks

if i get this as a present, i will recolor it. appreciate the review but i guess this toy is marketed for kids.. no offense guys..

Funny you should mention repainting...

I recently became aware of what Trans-fans call a "chase" figure- in essence, a rare repaint that isn't advertised as such. Supposedly, Sideways has a chase variant, where the silver paint on the car has been changed to a dull gray.

Yep, I got both the light silver Sideways and the dark silver Sideways ( I prefer the latter ; I found it at a Target in Humble TX by the way ). Anyway, nice review. About the feet ; the 'official' way of positioning is to use the wheels as heels, like in my pic :

It makes him somewhat more stable to pose and it helps getting rid of the tiny feet feeling, a bit. Sure, he lacks paint in robot mode, but other than that this is a really nice mold with LOTS of intricate detailing and the car mode is lovely even if it's not 100% true to a real Audi A8. The "backpack" sits nice and secure, but I wouldn't say this is a toy aimed at kids or simpletons. On the contrary.

I really wanted to like this guy, but he's so hard to stand up on those tiny little chicken feet. I'll try the wheel heel trick, but most of the time this guy just stays in alt mode on my shelf.

The box and instructions both say the wheels go down, but if you dot that, then his feet become too big! While, yes, putting the wheels down stabilizes him greatly, I have to give the benefit of the doubt to images I've seen of him in the video game, and say that the wheels aren't supposed to touch the ground.

I haven't had much trouble getting Sideways or Dead End to stand. It's just a matter of making sure the toes (like several of the characters in the movie, he's got digitigrade legs) are directly underneath him. My copy of Dead End's joints are a bit tighter, so he stands a bit easier.