Ok, so it’s not a cassette. It’s not even some kind of recordable media. However, they did keep Ravage as some kind of four legged animal, so that’s something. 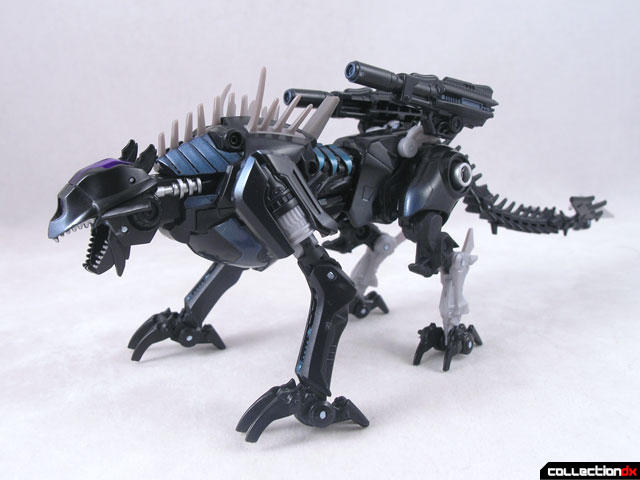 Ravage is one of the Deluxe Class transformers to come out of the 2009 Transformers: Revenge of the Fallen line. In the movie, Ravage has no alternate mode (that we can see), so here it makes a sort of missile or ship – basically a form for entering the atmosphere. 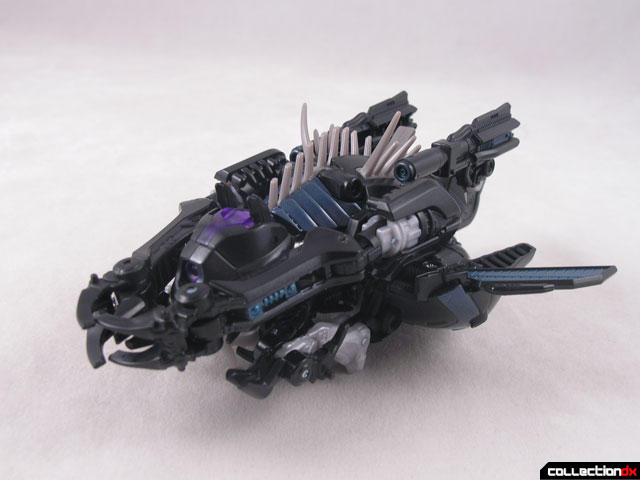 In the movie, Ravage is a scout and a thief – he sneaks into a top secret bunker to steal a shard of the Allspark. He is launched from Soundwave posing as a satellite orbiting the earth. The G1 version of Ravage was a cassette that deployed from the transformed cassette deck, Soundwave. 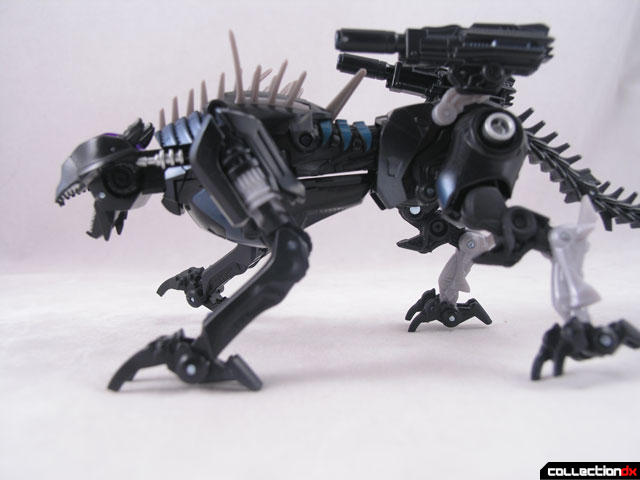 The toy reminds me of a Zoids Liger unit – it’s spiky and angular and has a lot of articulation. This big cat is not something I would want to mess with. 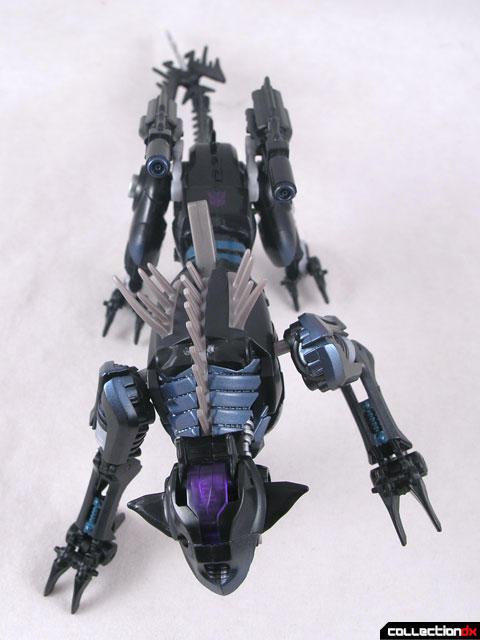 As a toy, it’s mediocre. The alternate mode seems very weak, but the robot mode is pretty cool. Articulation is decent, with ball jointed legs, hinged feet and knees, and even an articulated tail. 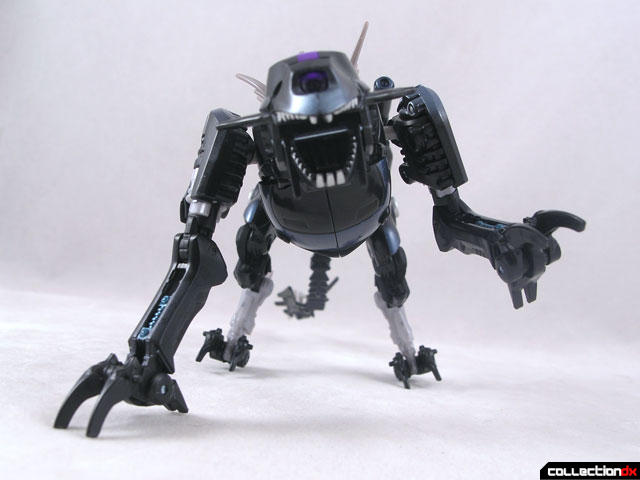 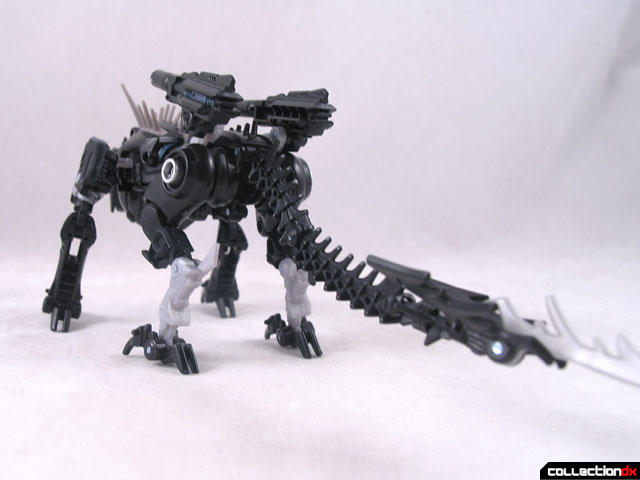 The head of the figure contains the “Mech Alive” gimmick that all the toys in this line featured. In this case a lever behind the head activates the extending neck and opening mouth motion. The head has purple light-piping to simulate the cyclopean glowing eye. 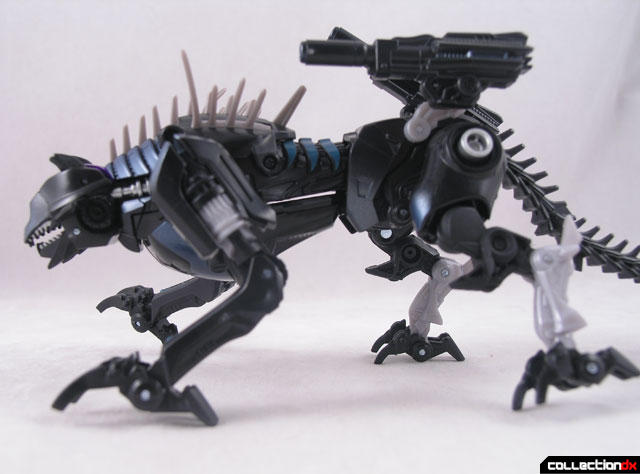 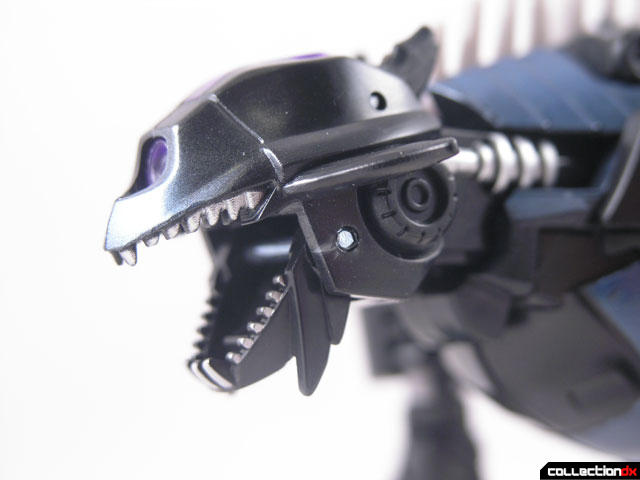 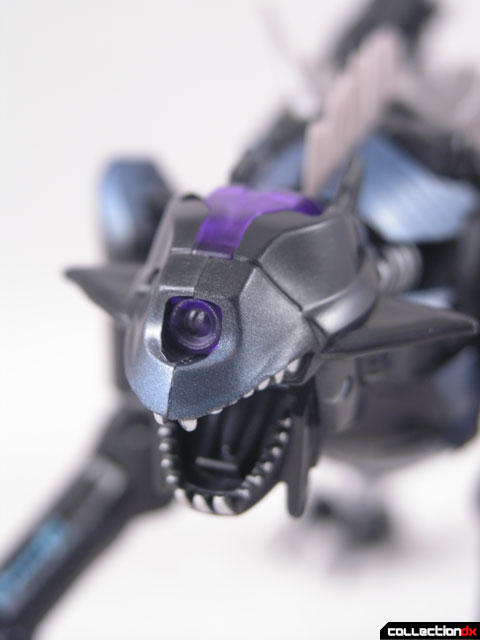 There’s also a simulated Mech Alive effect in the upper front legs where you can see an inner gear turn when the leg is rotated. 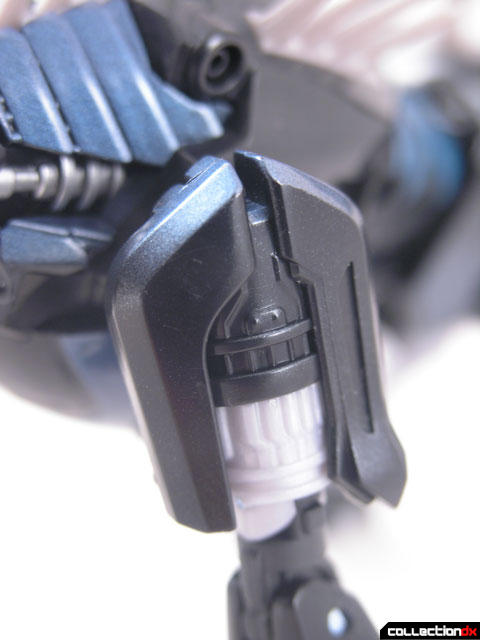 On the hind quarters you have two large posable cannons that unfortunately do not fire anything. 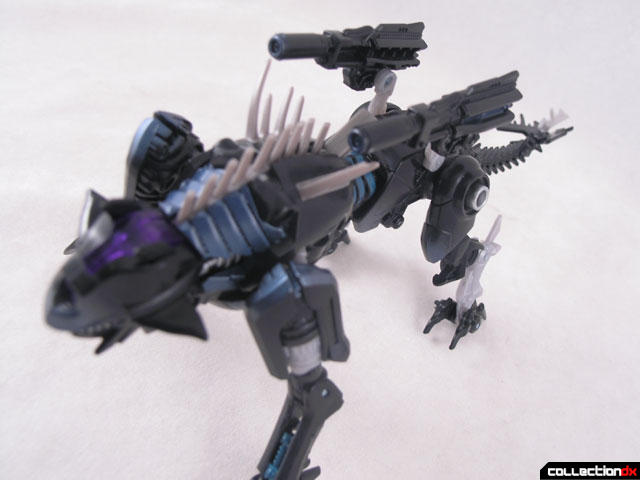 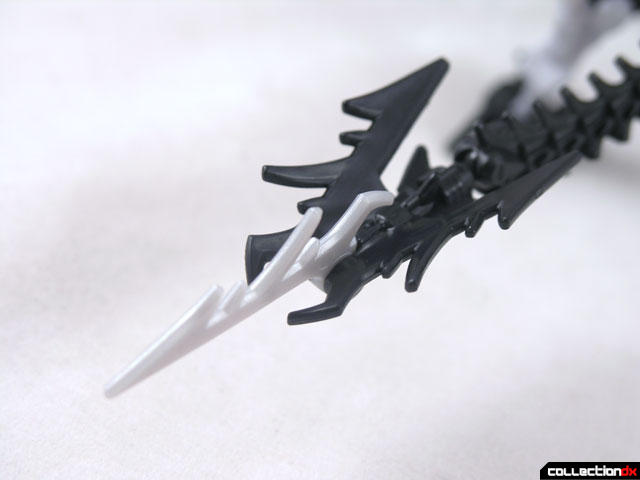 Like I said, robot mode is cool, but alt mode is crappy.

To transform Ravage, put him in between both of your hands and squeeze. Mush him around a little bit. Flip in the tail. Congratulations, you’ve transformed him into Ravage the space potato. 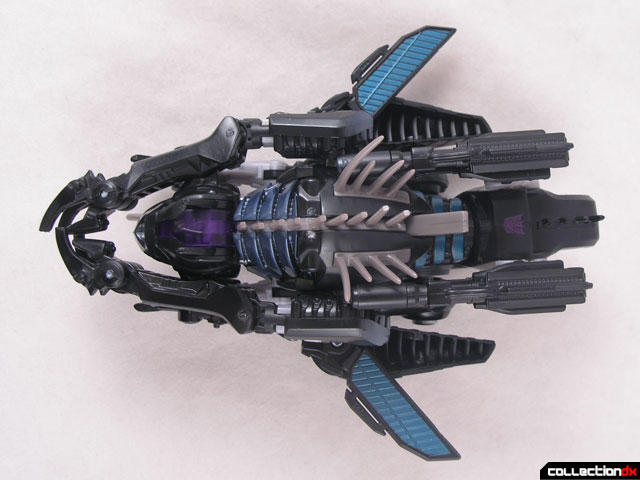 Seriously though, the alt mode stinks. It really doesn’t matter how you transform it, because even in its finished alt mode it looks like a kindergartner came up with it after moving the joints around. 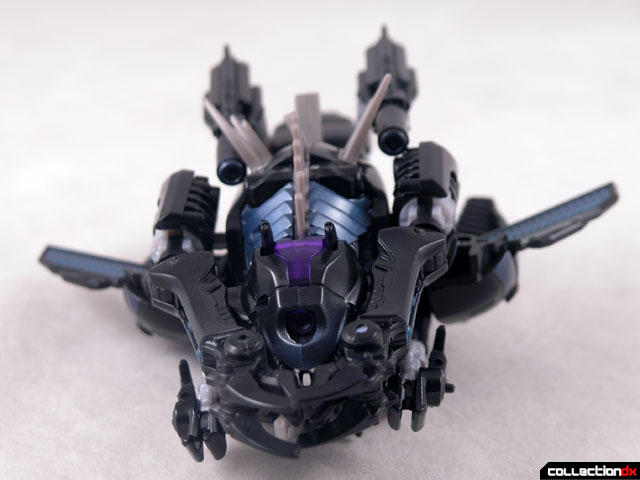 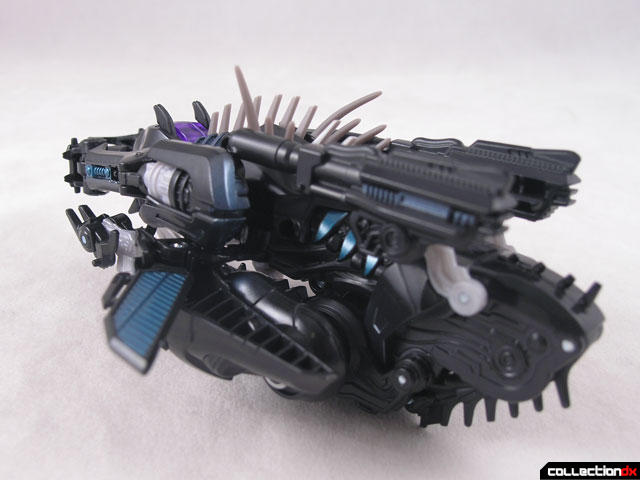 Ravage has always been a fan favorite character, and fans should dig this as long as they don’t transform it. It retains the classic Jaguar aesthetic from the G1 version, but with a very modern twist.

I like Device Label Ravage better b/c his modern design twist is reliable in both worlds.

It does look quite a bit like zoids especially with the turrets attached to the hips and liger zero's armor when he transformed.

I like my Zoids built, heavily-armored, and motorized. This one's thinly represents these flavors. Man do I miss those Zoids from Hasbro/TakaraTomy.

Unfortunately, the original Ravage design was a victim of advancing technology: we just don't use tapes any more. But think about what will happen to traditional Transformers canon when cars are finally replaced by teleportation!

"Unfortunately, the original Ravage design was a victim of advancing technology:"

But progression didn't kill the original Ravage design, it upgraded him into something more convenient like a USB jump drive & that makes it fortunate.

"we just don't use tapes any more."

What do you mean by we? Who is we? Why are there audio microcassette tapes, MiniDV tapes & audio/video recorders currently sold in Best Buy & Wal-Mart? They haven't gone anywhere b/c people are currently in need of them, so they haven't been retired--not yet.

"But think about what will happen to traditional Transformers canon when cars are finally replaced by teleportation!"

How can we think about something like that when that idea's already been used constantly in G1, G2 & BW canon,etc.? They're alien robots, they've created teleportation on Cybertron, they've used it back & forth & they're still robots in disguise. Space Bridges doesn't count as teleportation? G1 Skywarp's teleport abilities doesn't count either? Sir, I've honestly failed to contemplate your perception in this claim.