Once upon a time, I was a freshman in high school and suddenly too cool to watch Power Rangers or VR Toopers or Superhuman Samurai Syber-Squad or Teenage Mutant Ninja Turtles so I totally did not watch Saban's Masked Rider when it first aired. I was, however, generally familiar with Masked Rider (or Kamen Rider if you want to be pedantic) as a concept because the wonderful world of Japanese trash TV culture was opening up to me thanks to VHS tapes of raw untranslated, off the air Japanese broadcasts my stepmom used to give me, and trips to Japantown in San Jose. When I was in college and DVD had all but destroyed video cassettes as a medium, I spent so much time scooping up used tapes from every video store I could find. One of those tapes was Saban's Masked Rider: Escape From Edenoi, the first couple of episodes of the show on one tape.

But it's a fascinating kind of terrible.

Long story short: In 1995, Saban took 1988's Masked Rider Black RX, a direct sequel to the previous year's Masked Rider Black and completely removed all of the original context. Instead of cyborg grasshopper man Kotaro Minami fighting the forces of the Crisis Empire, Saban's version starred alien superhero Dex fighting his crooked uncle in a gold helmet first for control of their home planet of Edenoi, and then the earth. Oh, did I mention it's a sitcom? I know Power Rangers and VR Troopers have comic relief, but this show is more like Superhuman Samurai Syber-Squad, a full-on sitcom with Japanese fight scenes tossed in here and there. But unlike that show, it's not really a sitcom in the Saved by the Bell mold. Instead it's My Favorite Martian or Out of this World meets ALF meets a sub-par 1990s Nickelodeon sitcom like My Brother and Me or Welcome Freshmen. The fast-paced and far-more-violent-than-Power-Rangers fight scenes really, really stand out tonally from the rest of the show. In fact, the fights keep getting cut short because they are so violent. It's very strange. 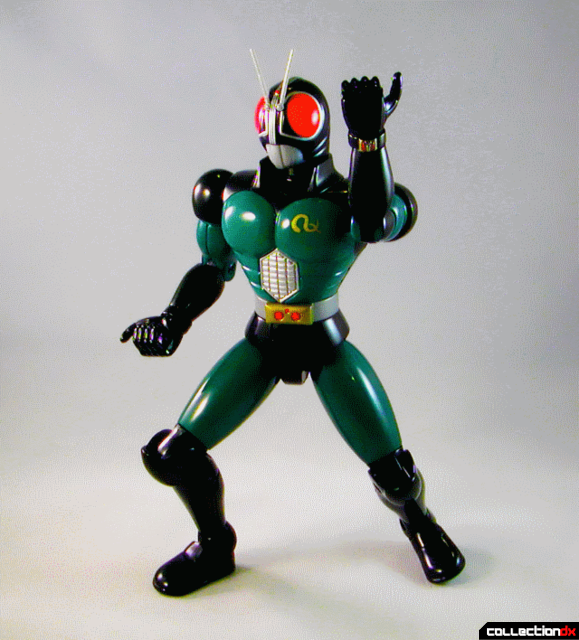 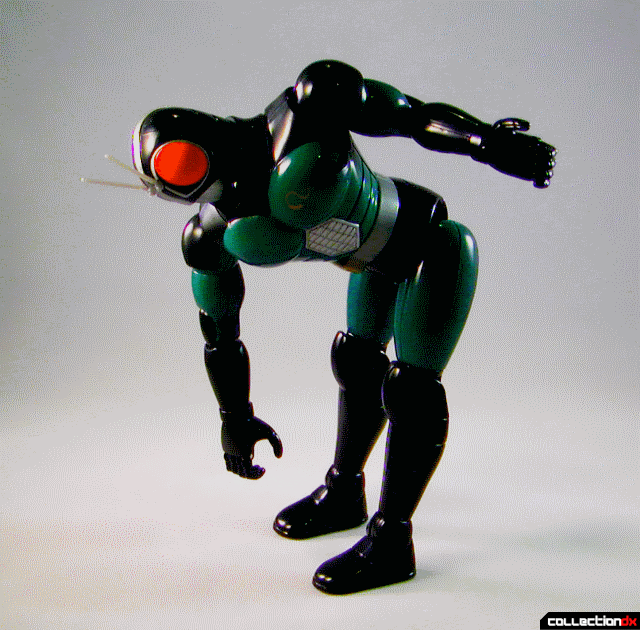 Is the toy any good? Well, I can save you some time and say if you like the 8 inch Power Rangers, you will also like the 8 inch Deluxe Masked Rider because it's based on the same engineering and is the same quality. It will also allow you to live out your fantasies of recreating the Power Rangers/Masked Rider crossover from A Friend in Need, a brief miniseries early in the third season of Mighty Morphin Power Rangers. Okay, but what if you have never touched one of these toys? Will you like it? That depends. 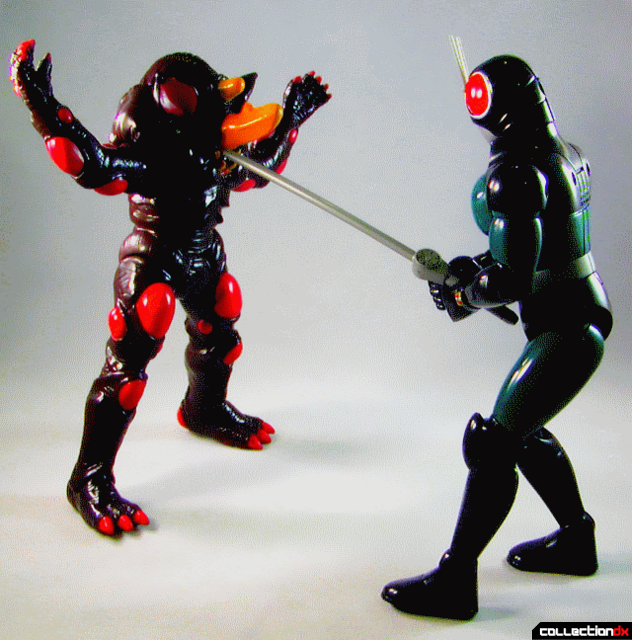 It is entirely plastic except for the screws, so if you are jonesing for diecast, look elsewhere, but if you want an oversized action figure with articulation that was mind-blowing in 1993 but is only adequate today, read on. This Masked Rider toy is really quite large. It make be hard to get a sense of scale from some of these pictures, but it is taller than most of the soft vinyl Deluxe Evil Space Aliens from the first couple of years of Power Rangers or most "standard size" sofubi you would care to name. 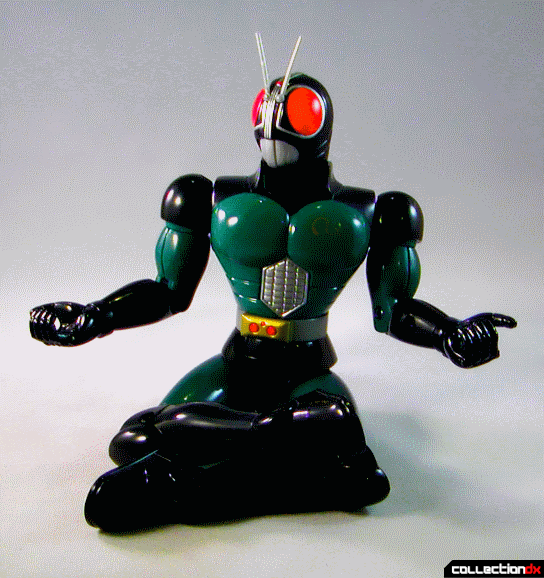 I am pretty impressed with the poses you can get out of the toy. The feet are poseable (though you just get an up and down hinge, no ankle tilt). The hands open and close though the fingers are one solid piece. The hips, knees, arms, elbows, and shoulders are all quite respectable. There's even an unrestricted waist joint! It is too bad, though, that the big collar prevents the head from moving that much, but it's an artifact of the original design so hard to deal with that it took Bandai two attempts in the S.H. Figuarts line to come up with a good solution. 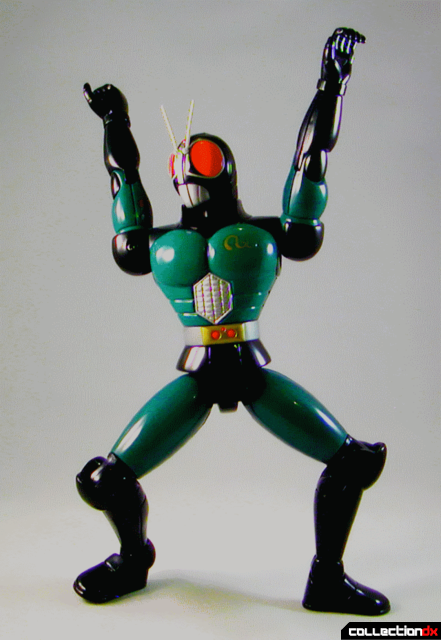 While it is definitely based on the Power Rangers mold, it has been extensively remolded to match up with the Black RX suit from TV. It's not just the collar. The toy has everything from the Ecto-Accelerator Belt (Sunriser in Japan) to the bizarre bug mouth sculpted in. While the build is more muscular than the source material, it's not the gross steroid muscles of later Power Rangers and works pretty well. The new molded and painted detail is pretty crisp and is especially impressive on the weird bug eyes and "nose". 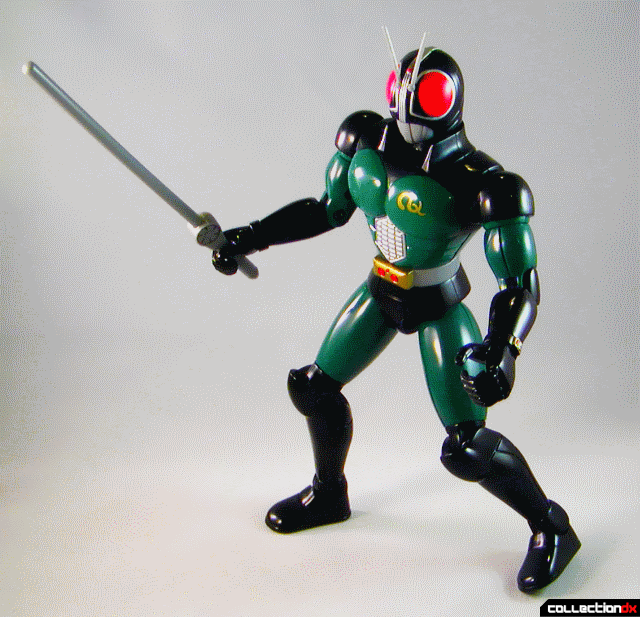 It's a little disappointing that the only accessory, the Electro Saber (Dex's equivalent of Kotaro's Revolcane) is all unpainted gray plastic. The detail is okay, but nothing earth-shattering. It also has no way to recreate the glowing lightsaber action that they had on the show. Would it have been that expensive to provide an alternate Electro Saber in clear plastic? It's also a bummer that the plastic is kind of soft so the sword can droop a little, but it's nowhere near as bad as the Gundam beam sabers that come with the Mobile Suit in Action toys. 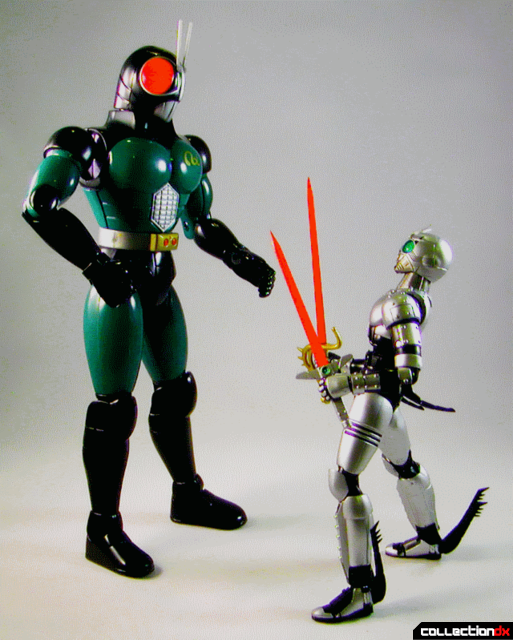 Speaking of soft plastic, Masked Rider's antennas are also soft gray plastic, but in this case, this is a great idea. It's far too easy to break off the antennas on the generally much nicer (albeit smaller) S.H. Figuarts Masked Rider toys. There's a little mold flash on one of the antennas on my example of the figure, but it could easily be removed with a hobby knife. A tiny bit mold flash is the closet thing there is to a quality control issue. This is a well-made toy. 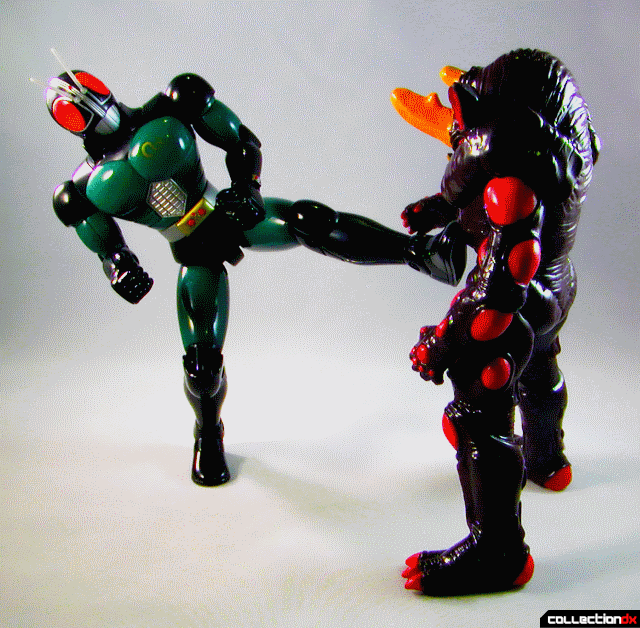 The 8 inch Deluxe Masked Rider has a certain chunky charm about it, despite its relatively light weight. It is really satisfying squaring it off against sofubi monsters. It's too bad that they never released any "standard sized" Insectovore monsters for Masked Rider to fight, but the Power Rangers Deluxe Evil Space Aliens are perfect for the job. I recommend using some of the season two Power Rangers ("Zyu2" to fans) creatures like Rhinoblaster here that never appeared in Zyuranger or Dairanger because they don't feel so indelibly tied to Sentai. 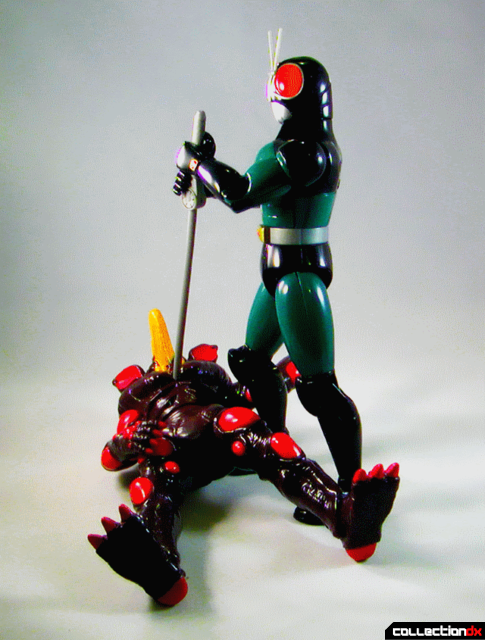 If you are a fan of Black RX, but hate Saban's adaptation of it, don't let that stop you. For a twenty year old toy, it is pretty impressive. It feels a bit like an '80s toy, but is made to a higher standard of articulation, detail, and show accuracy. It may be a little light, but it captures the spirit of the design and is a tough plaything that's very fun to fool around with. It is also cheap on the secondary market.

So the next time Insectovores attack, grab your 8 inch Deluxe Masked Rider and scream, "Ectophase activate!" Then get embarrassed and whisper it to yourself while you play with your toys and ignore the snickers from your roommates or family members. You deserve some playtime with this bug.

I remember the show... the funny credits narration, and the b@st@rd love child of Howard the Duck and an Ewok...
such bad memories... I think if they'd inserted a laugh track it would have made it less painful.