Transformers Generation 2 was a true well of ideas for interesting toys. Electric circuits in robots smaller than Deluxe class, semi-automatic weapons, automorphs... the list goes on. Today we shall study an example of a different gimmick: one that change's a toy's surface colour when in contact with water. Was this gimmick one of the ground-breaking ones, though? Stay tuned to find out. This is Autobot Deluge. 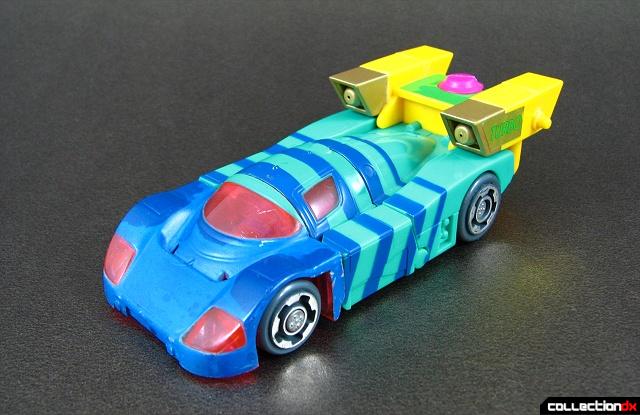 Deluge belongs to the Aquaspeeders subgroup and transforms into a Le Mans-inspired race car, fitting in with his team's sport vehicle motif. This, as you see, is almost a painfully simple design, but in its simplicity it works really well. You can certainly feel the nostalgia of great racing machines long gone here. 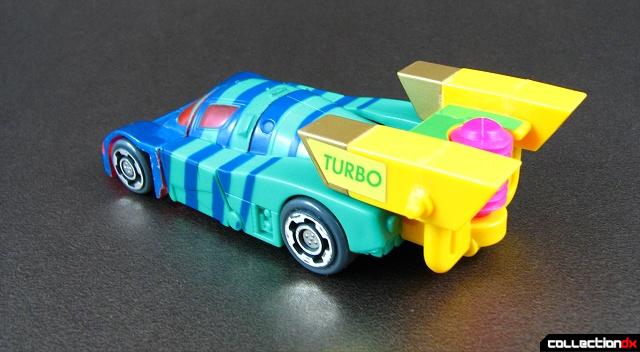 If it wasn't for the fact that Deluge's rear spoiler was replaced by a appropriately-shaped twin-barrel hydro cannon, this toy would be hard to tell apart from a larger Hot Wheels. The presence of yellow is questionable, but it's a thing repeating in all Aquaspeeders, so I assume the designers had some grander Design in mind.

The side view is satisfying; except for the weapon section, the toy has shapes doing the source justice. Yes, I'm aware my piece doesn't look perfect, but that's one of the reasons I never bought anything else from the previous owner ever again. 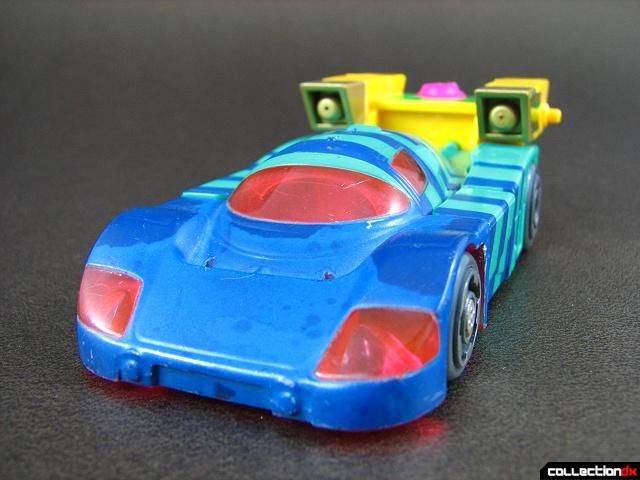 The entire front piece of the car is one big chunk or red / pink translucent plastic covered in blue reactive paint that changes colour, or rather becomes transparent, when splashed with water. In theory. I remember the TV ads for Aquaspeeders from when I was a kid. The small screen made it seem simple: you moist the parts, and up goes the red that's supposed to represent battle damage (the European version of these toys omitted the “show your true allegiance” gimmick used in the US releases). Does this actually work? 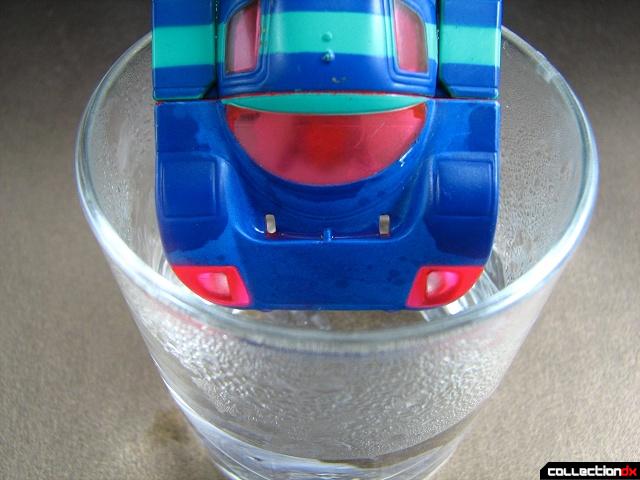 I'm not sure how this mechanism functioned back in the day this was first released, but today it works poorly. Why? Because to make the reactive paint react with liquids they must be really warm. Boiling hot, even. I am not kidding you, this is test-backed statement. I achieved the best results with water that was literally spilled directly from the heater. This means temperatures of about 100-85 Celsius degrees (sorry, I'm from Central Europe, I don't do Fahrenheit) and to make it at least partly visible I bathed Deluge's front in hot water seconds before taking the picture. 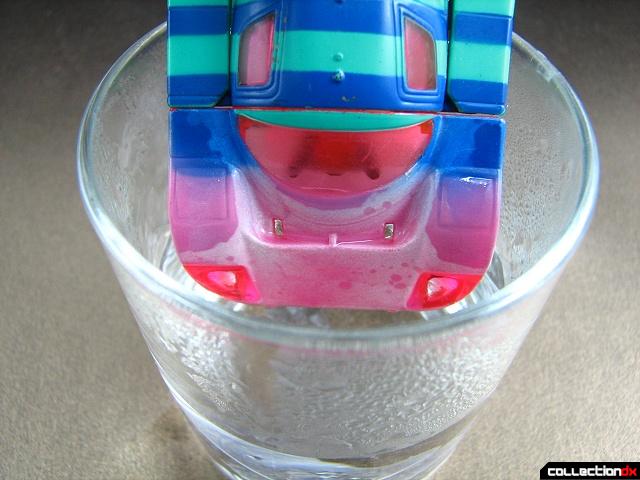 This is where the fail-factor of Deluge kicks in. Understand this, it's a toy for small kids that requires them to put in boiling liquids to work. No sane parent would ever allow its greatest treasure to do that. A moment of diverted attention, and a tragedy is inbound. The problem is, lower temperature water does not work with Deluge and even when it's warmer, the paint goes back to its default state in a matter of seconds. Who even approved this gimmick in the first place? Perhaps this mechanism is very age sensitive, but I'll never know. 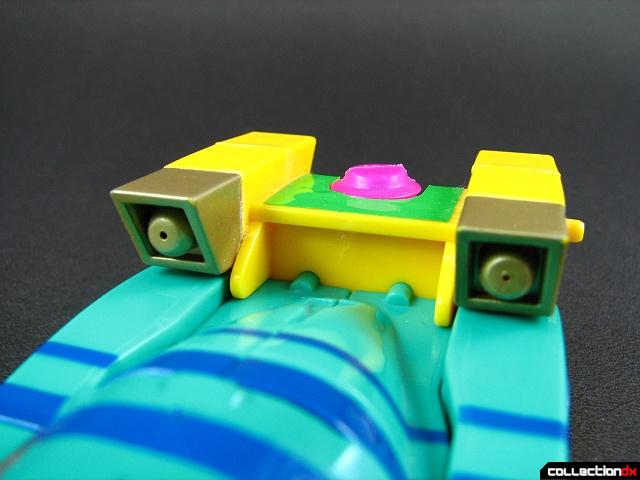 Another idea I have mixed feelings about is the hydro cannon's design. 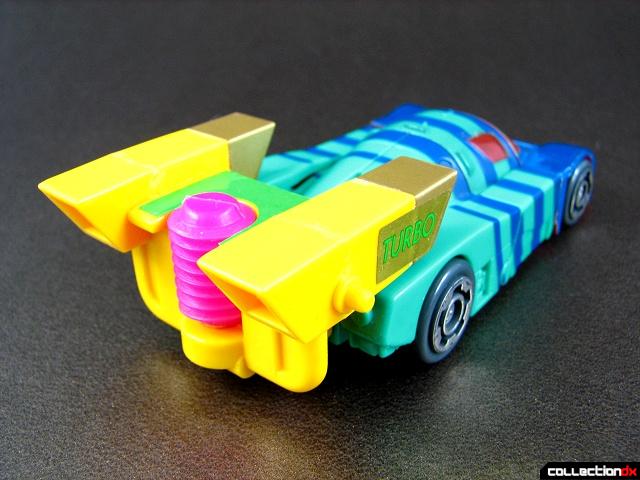 As you can see, there are paper-based stickers near the barrel tips. Which is very annoying when you remember Deluge's water reserve is replenished though the said barrels rather than through a separate access point. Here's how you do it. You squeeze the rubber trigger (mind the color, so out of place, so characteristic for G2), submerge the barrels in water and release the trigger, creating sub-pressure that sucks water into the gun.

You know where this is getting. The more you reload, the more you damage the stickers. I really have no idea what occupied the guy who approved this design. Well, there's a chance my fear is unreasonable and the stickers were designed to tolerate moisture in the first place, but I'm not going to double-check in field tests. 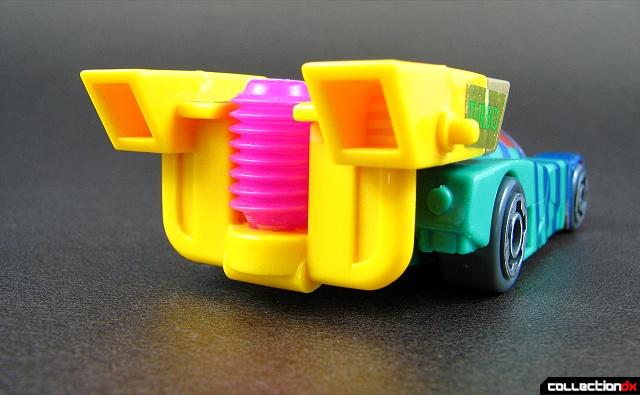 Another thing that makes me wonder is that this gun has two barrels but the firing mechanism is identical to other Auqaspeeders. I sometimes ponder whether the pressure distribution does affect (decrease) Deluge's effective firing range when compared to his uni-barrelled team mates. With my policy on using this function I may only speculate that it does. 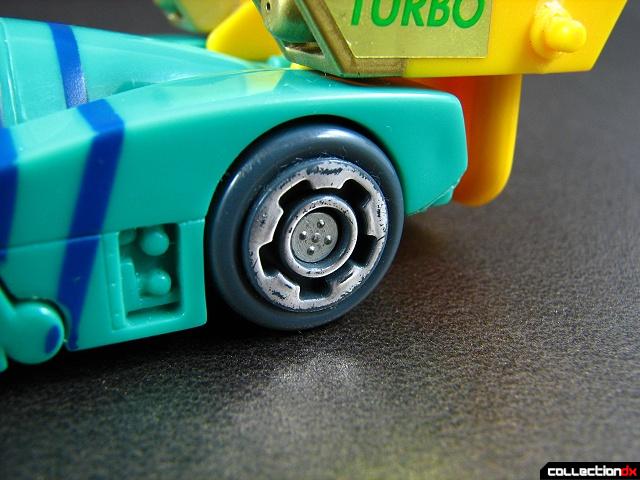 Also, chrome on the wheels! Or what's left of it. Still, much appreciated addition to the toy. 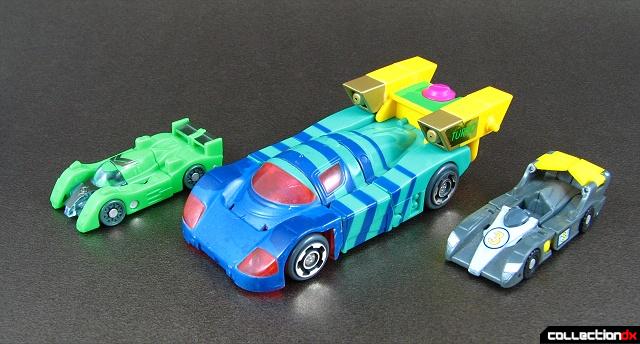 Comparison time. While there were more Le Mans-based Transformers, not all of the were at my disposal when I was taking these pictures. Still, here is Deluge next to Cybertron Six-Speed and Armada Downshift. 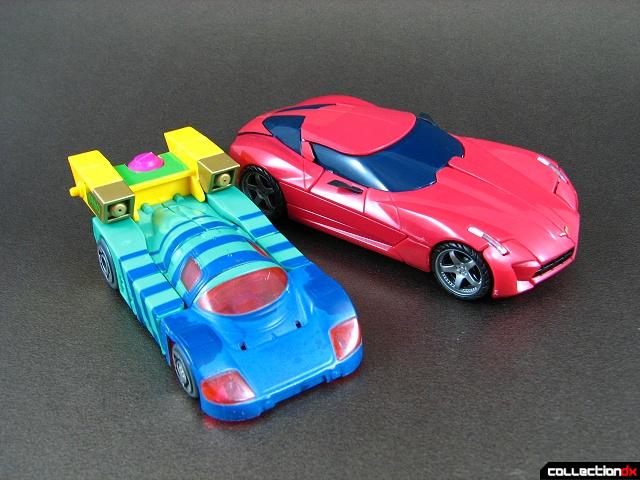 And here is he is with Revenge Of The Fallen Swerve. 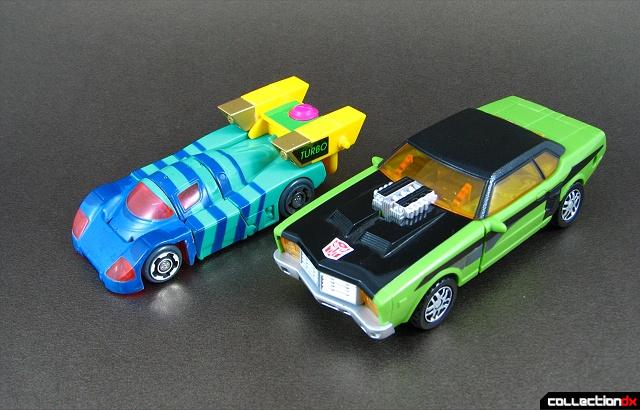 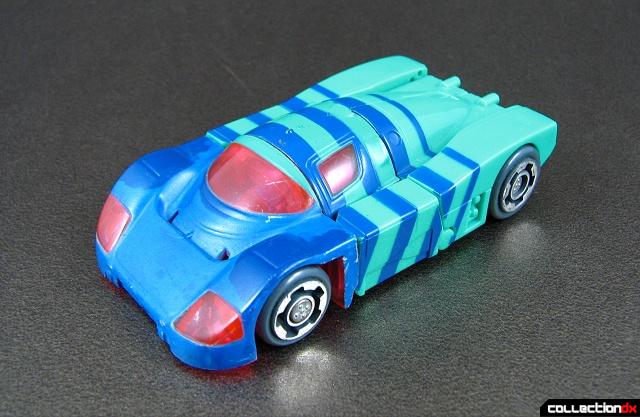 And here he is weaponless. I admit, that looks pretty cool, too. 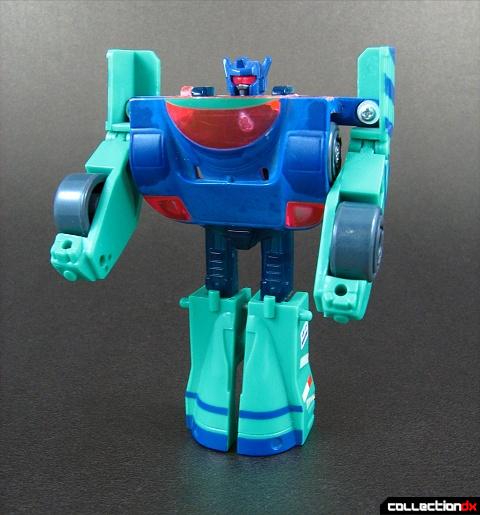 Entering robot mode. In this shape, Deluge remains loyal to traditions of Generation One in that he is almost completely unposeable. Then again, he has a very catchy look. Back in the early 90s, the transformation still had the priority over any other function of the toy, only sometimes making room for more complex gimmicks. Completely different from what kids use to play with nowadays, but the charm of this piece of plastic is undeniable. 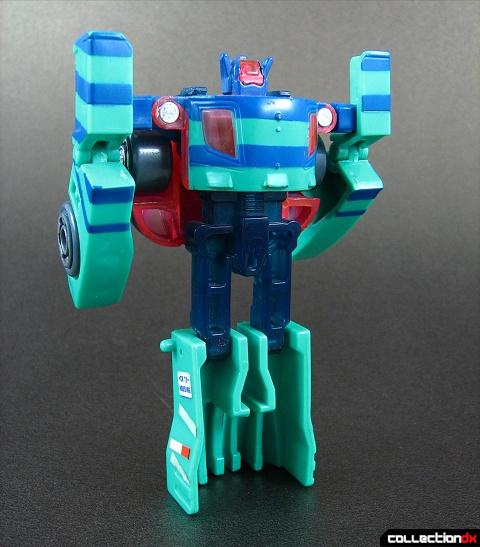 The back is perfect at achieving what many modern Transformers have tremendous problems with: a clean, back-pack less design. The traces of existing vehicle mode are minimal and you can tell it's supposed to be a robot at first glance. 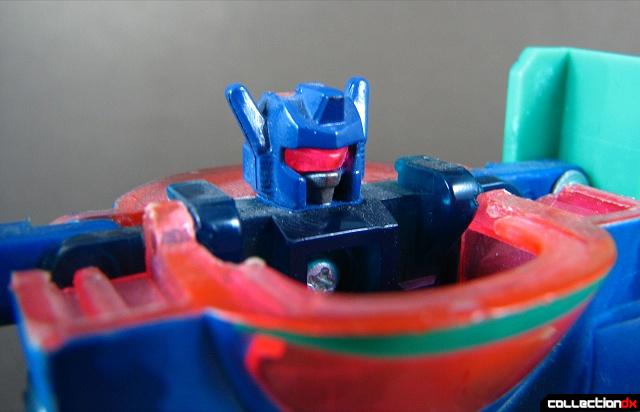 The head itself is decent enough. Simple, two-tone construction with a pink clear visor for eyes that enables lightpiping. It's not outstanding, but does the job of looking better than random piece of plastic on a stick. 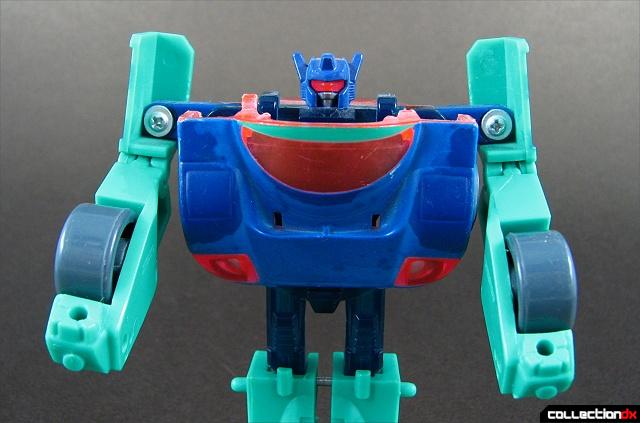 A zoom shot shall not reveal anything truly interesting, maybe except for the holes in Deluge's hands, which oddly enough is not used to hold his own gun (he holds it with holes in the side of his forearms). All in all this picture is more of an appetiser for what lies beneath. Sadly, to show the said what, I have to make a use of an otherwise annoying damage inflicted upon Deluge by his previous owner. At least during a review this has an up side. 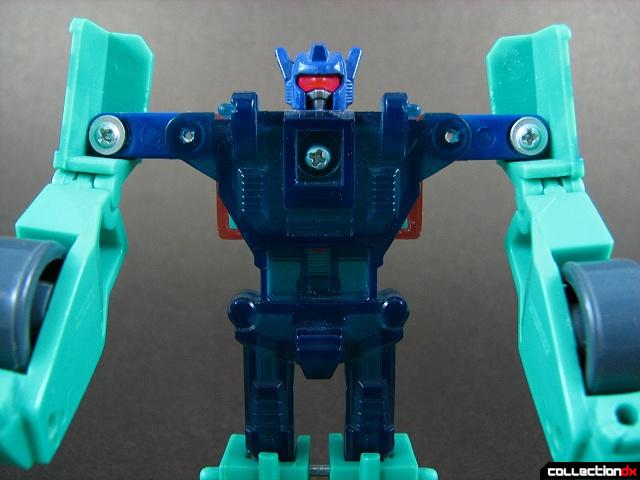 The said damage allows me to remove the car mask from the chest, exposing a delightul piece of translucent blueish greeb plastic that makes up for the entire torso and upper legs. Have I mentioned already I'm a sucker for this kind of material? Probably so. 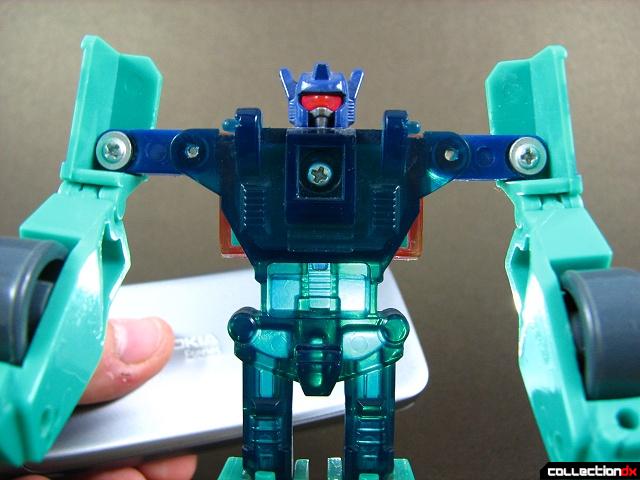 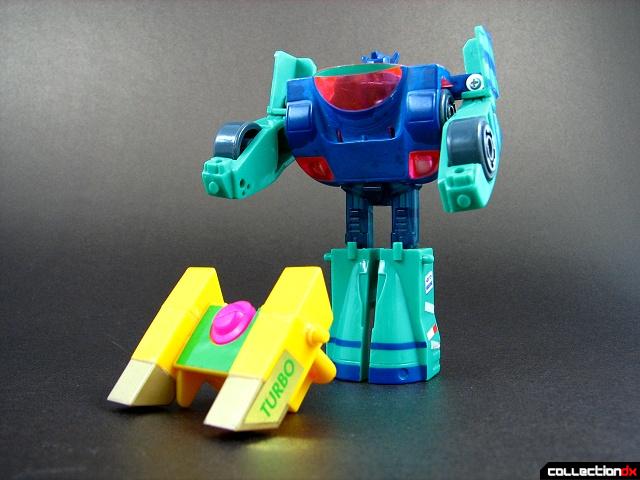 The moment of truth. How will Deluge handle his gun? 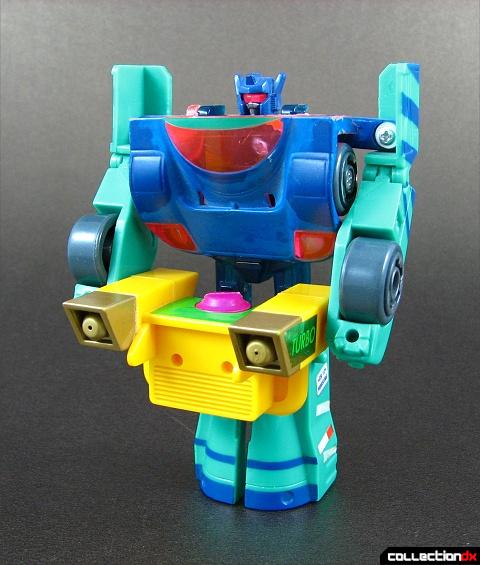 Not exactly how I hoped. I'm almost sure Deluge was holding his weapon much closer to his chest in the catalogue. However when reality of non-tweaked images kicks in, you start to realise this twin hydro cannon is too heavy to move it any higher or you risk loss of balance. 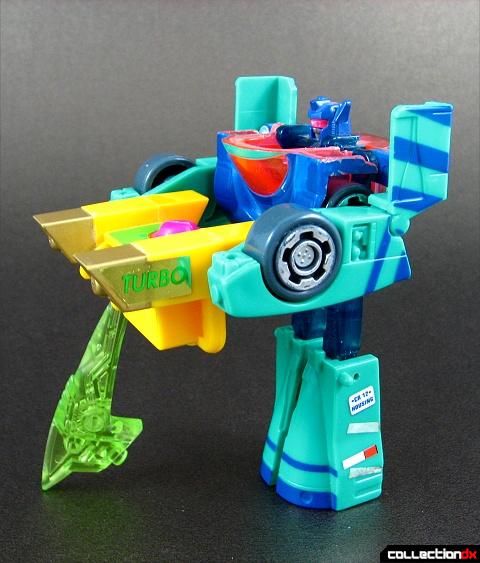 This can be fixed by using some means of support, but I've been having a hard time finding one that would not look out of place. 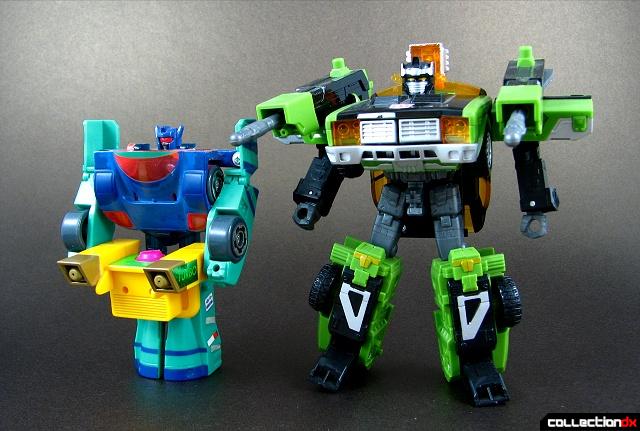 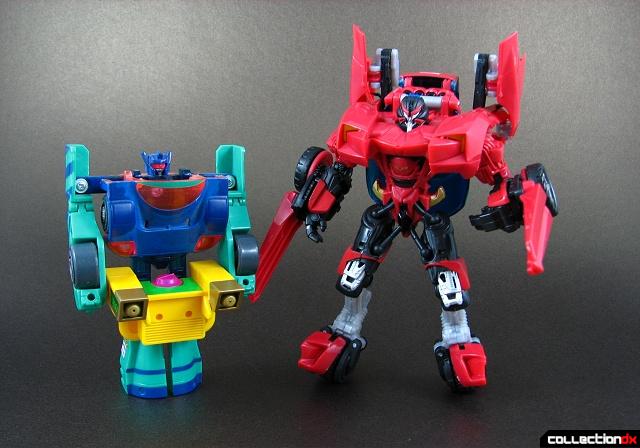 And then with ROTF Swerve again.

Conclusion time. As an avid fan of Generation 2, I really would like to say that Deluge is a great and unmissable toy. But I know that's a lie. On the visual end of things, he is a very charming and good looking Transformer. But when you move on to his functionality, he fails miserably. Reactive paint that only reacts to piping-hot water, weapon with stickers applied in the least favourable places and issues with remaining balanced when the said weapon is attached... The designers were on the right path, but decided to make a stop before going the proper distance. Because of this, Deluge can be recommended only to collectors who dont't mind having a flawed toy as long as it's from their preferred Transformers era. Others can skip this toy and look for something else to hunt for.

I can confirm that the stuff he was painted with was heavily damaged by time. Had a few hot wheel cars that used the same gimmick and they worked fine as a kid, though with time lost their ability to change colors.