The Kenner Death Star playset is the greatest action figure playset ever made, and I will fight anyone who says differently. I got my first one for Christmas, 1979. I have proof. 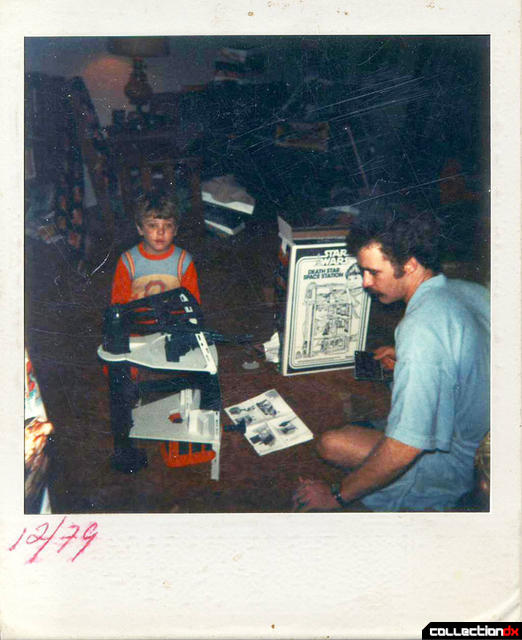 We all know that Star Wars is such an important part of popular culture. For most of you, there was never a time when there wasn't Star Wars. It might be hard for you to imagine what happened to my brain in 1978. I was 5. That movie changed the synapses in my tiny brain, forever burning in the images of lightsabers, stormtroopers and death stars. Like a dog imprints on its owner, I imprinted on Star Wars. 40 years later, nothing has changed. My original Death Star served as the basis of many adventures during my childhood, for at least a good 10 years. Parts broke quickly, but tape and glue kept it together. I think the remains finally went in the dumpster sometime around the time I went into high school in 1987. it wasn't until I started collecting again in the late 90s that I tracked down a new one to replace the one I lost as a child. 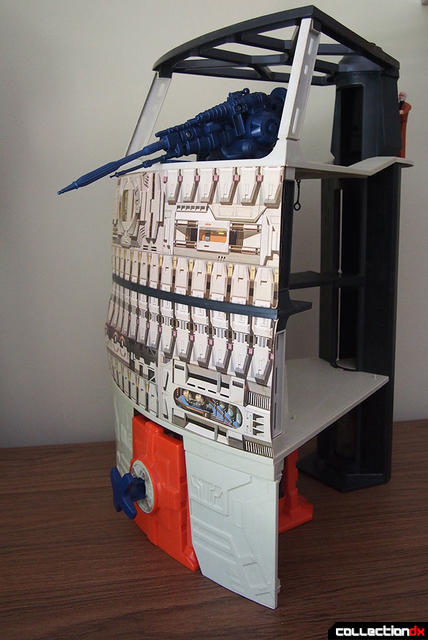 I was able to put the set together from memory. It seemed so small in my adult hands, but in fact, the playset stands about 21 inches tall. 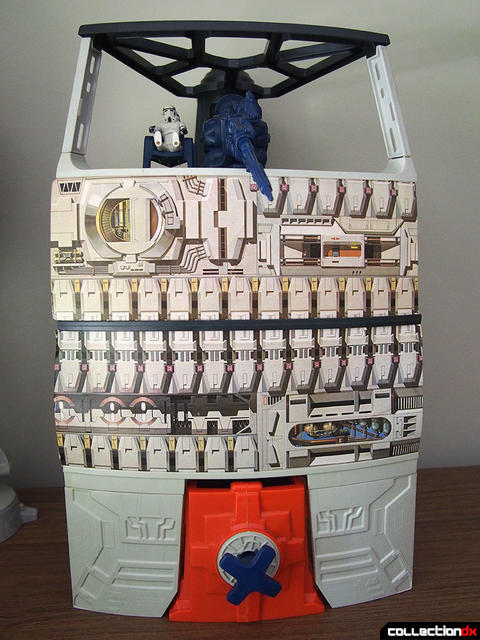 There are four levels to the Death Star, each replicating action scenes from the movie. The bottom level is the trash compactor, above that is the detention center level, above that is the chasm that Luke and Leia swing across, and finally, at the top, the cannon. 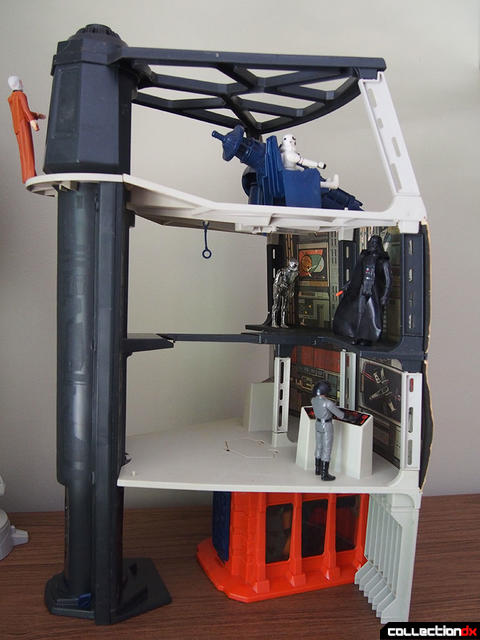 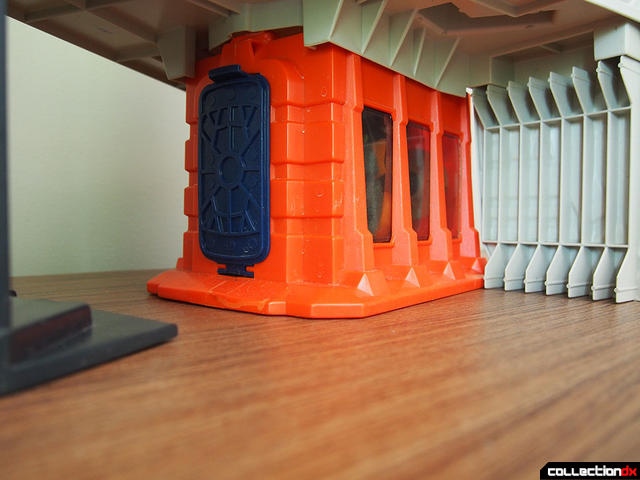 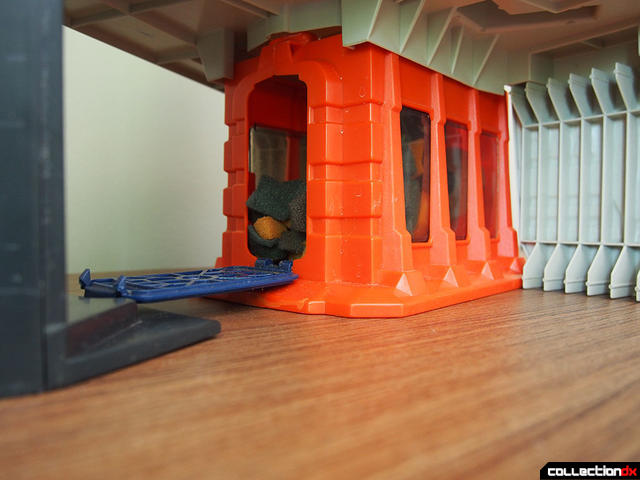 The trash compactor can be removed without affecting the structural integrity of the station. 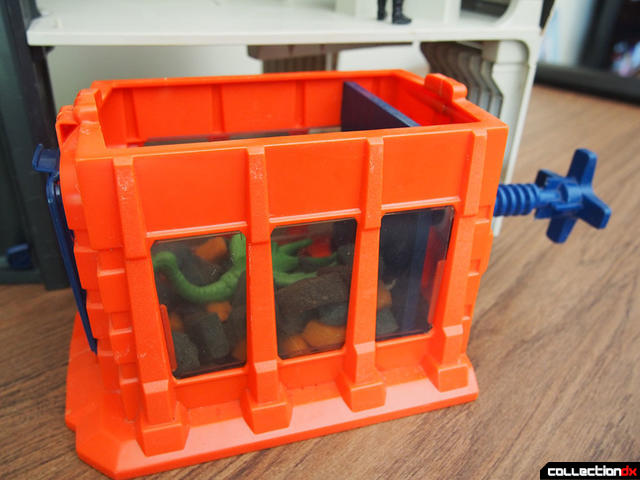 Included with the set was a bunch of multi-colored foam blocks that replicated the "trash" as well as a rubber monster, known now as the Dianoga. 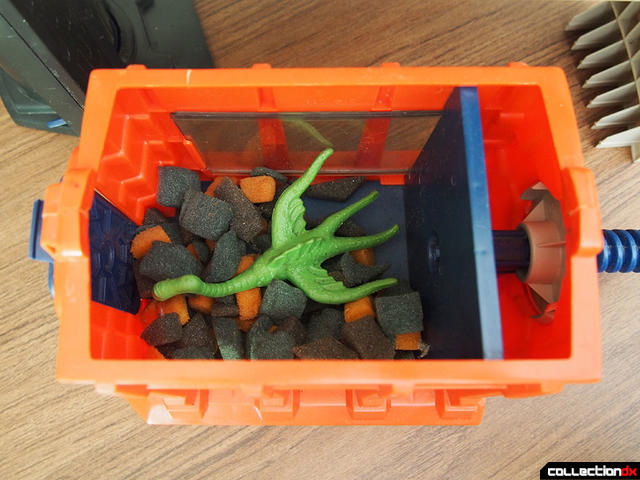 The large blue crank on the back causes the inner wall to move forward. With a full compactor, the pressure of the foam being compressed can pop open the door and allow our heroes to be free. 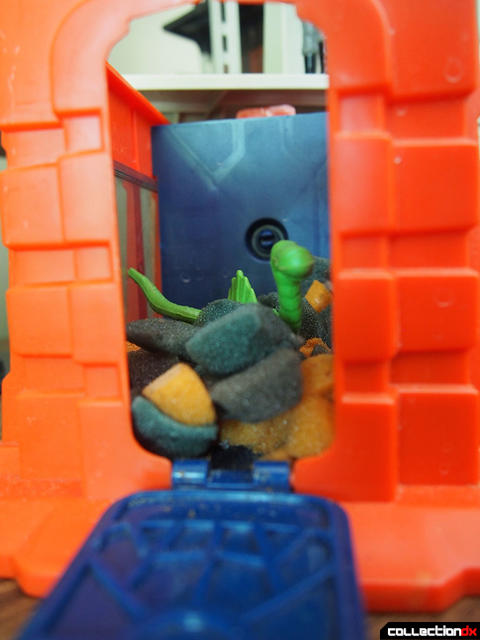 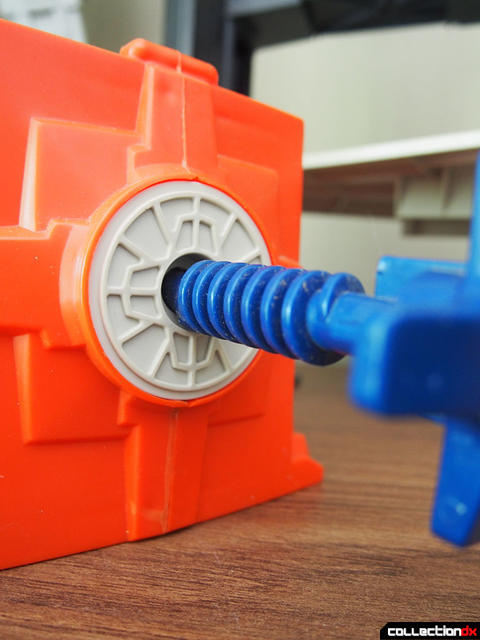 On the floor above, there is a small door that opens to replicate the heroes escape out of the cell block. 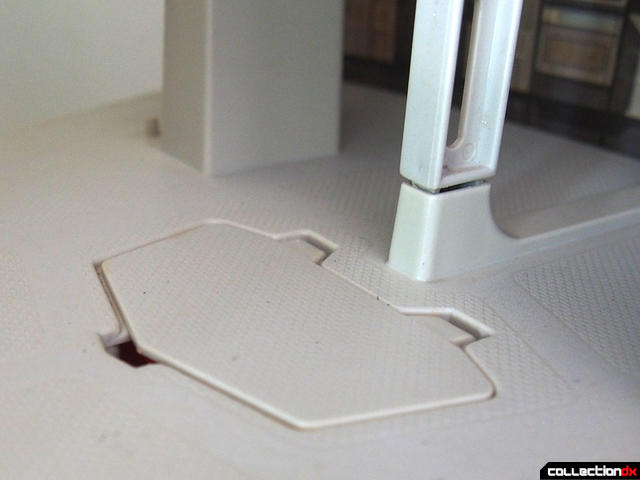 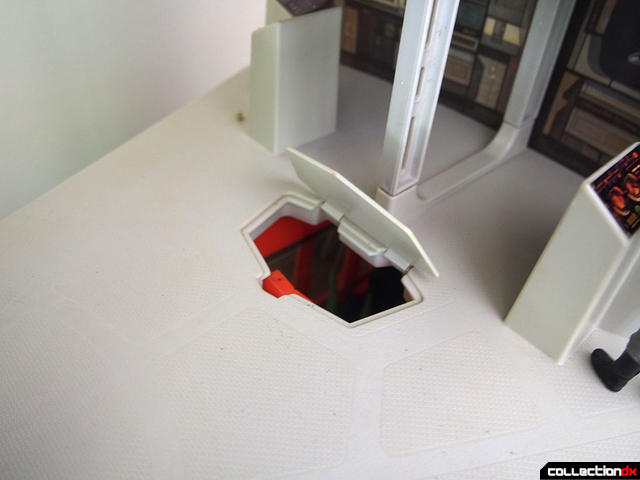 On this floor, there are two control panels, numerous floor pegs, and a wonderful display wall. The graphics on these cardboard panels are amazing. 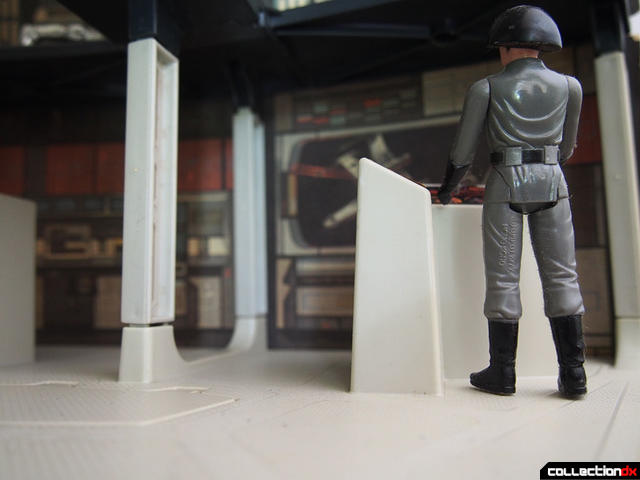 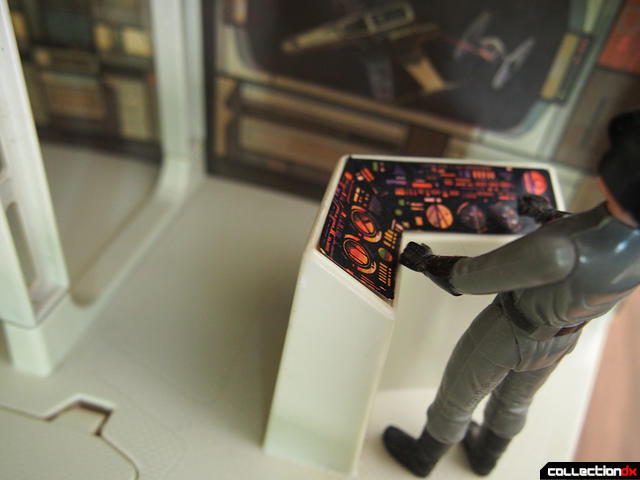 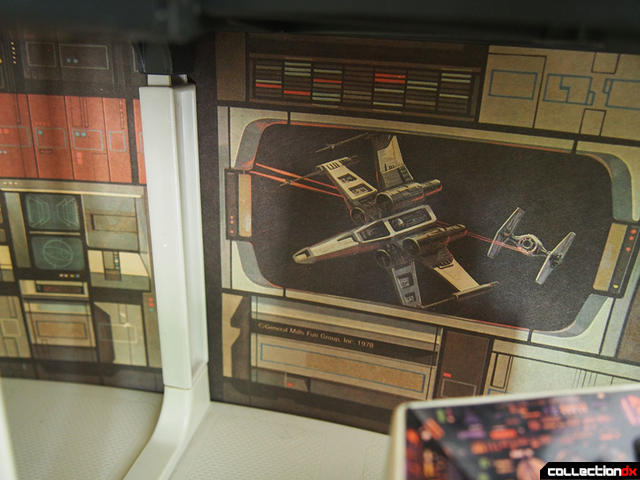 The next floor up has a lot of open space due to the extending ramp and swing. The plastic on mine has begun to warp so where the ramp extends to meet the elevator is a bit uneven. Again numerous pegs allow for places for your figures to stand. 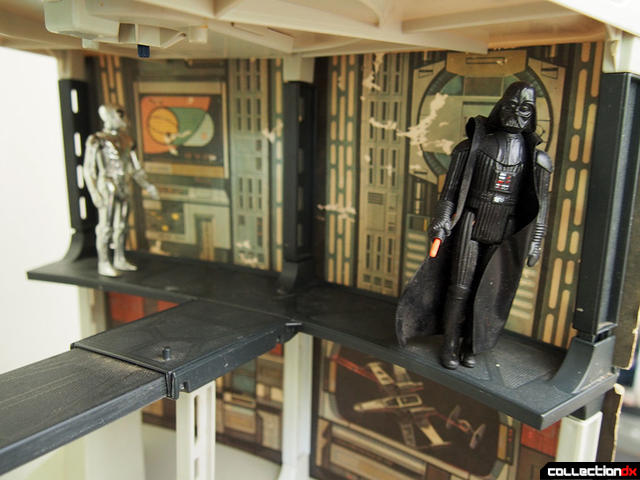 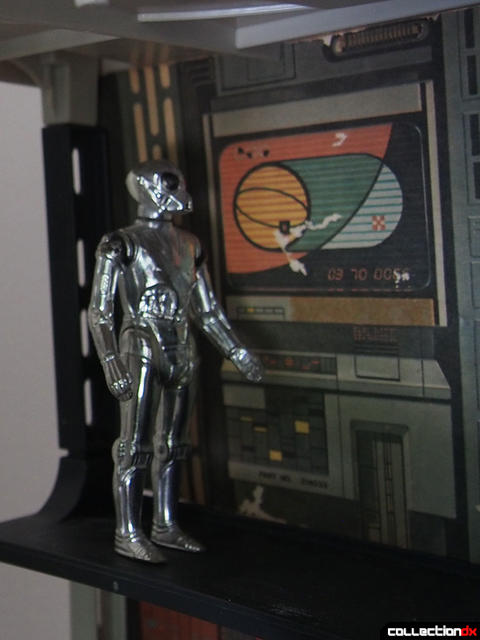 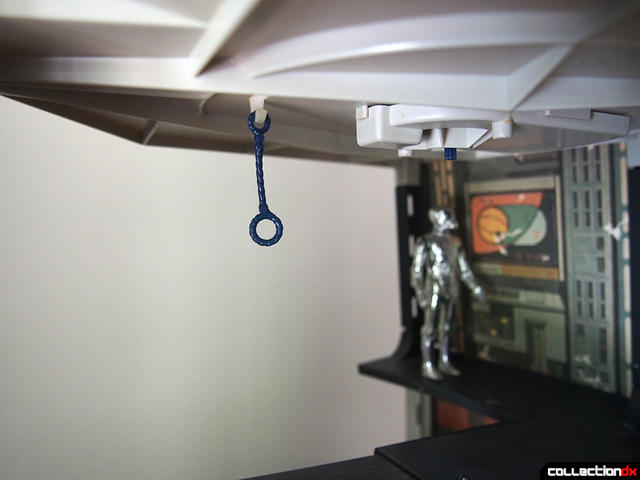 Hanging over the gap is the most often lost part of the Death Star - the rope swing. It's just two loops connected by a bar, but in my childhood mind, it was Luke's grappling hook for him and Leia to swing across the great chasm. 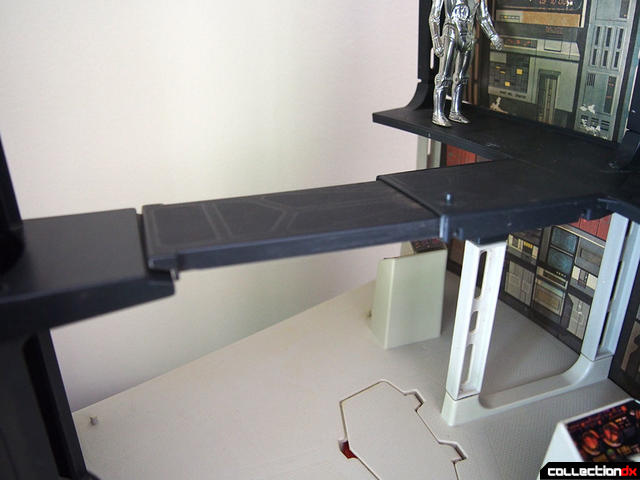 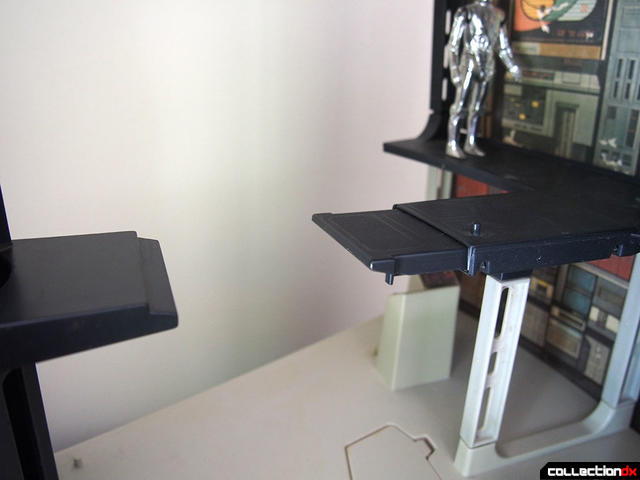 The top floor features the giant cannon, one of many used to shoot at X-Wings attacking the space station. This cannon clicks when it moves left to right, and if you press the lever, it pops up as if it has been destroyed. Again, this scene is shown for maybe half a second in the movie, but here it is replicated in childhood detail. My cannon has begun to droop in old age, but the launching action remains intact. The seat can hold one stormtrooper, but many more can be positioned on the various pegs. 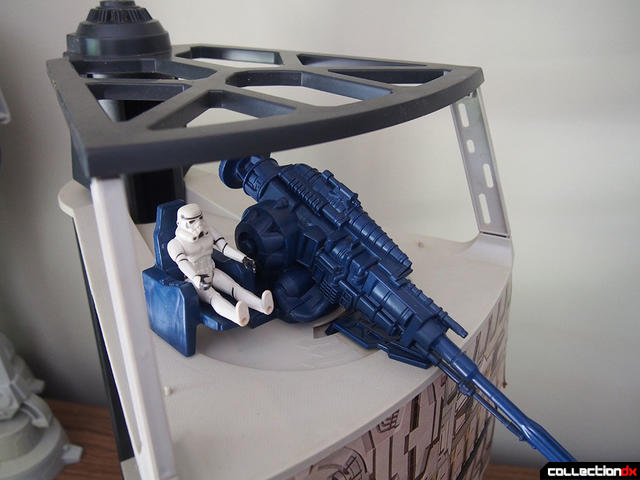 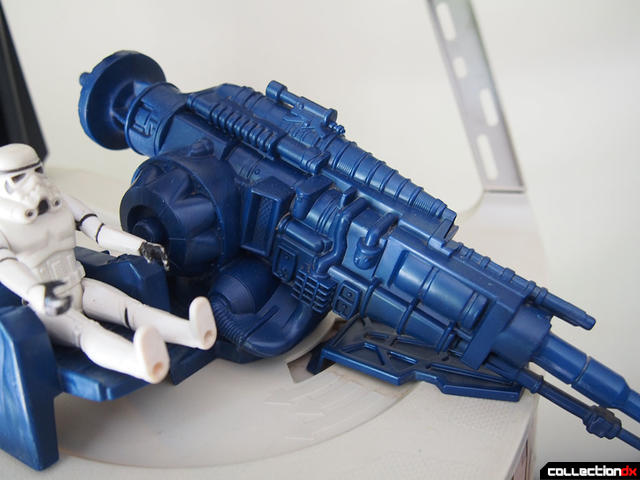 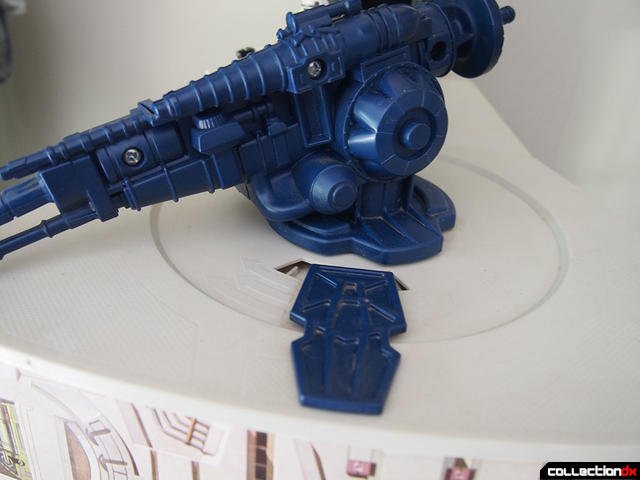 A nice feature is that the platform actually lines up with another platform that circles around the top part of the elevator. This is where Ben Kenobi turns off the tractor beam, again, another scene represented efficiently in this playset. 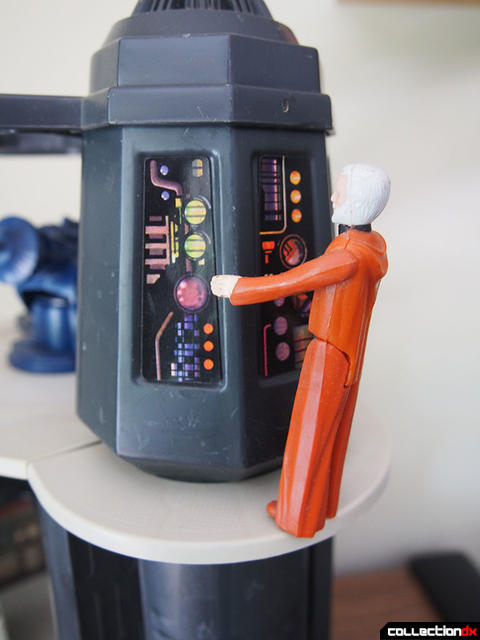 Last but not least, the giant elevator. This elevator is the literal backbone of the entire playset. The working elevator can fit two figures snugly and can be elevated by grabbing the tab on back and moving it up and down. When you have reached the desired floor, simply turn the tab sideways to lock it in place. To replicate the door opening, just rotate the clear cylinder and your figures can exit. 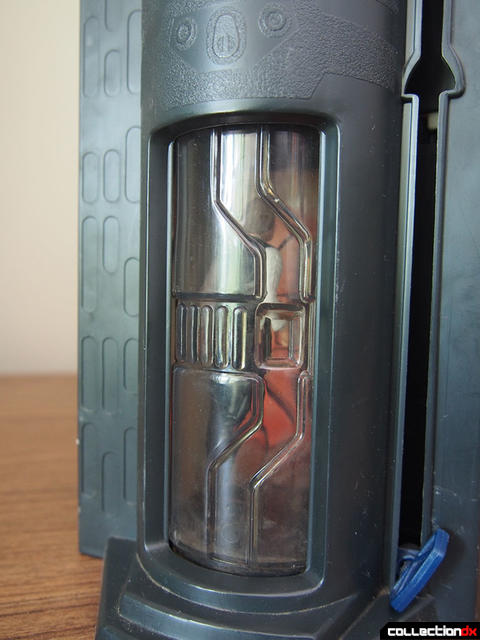 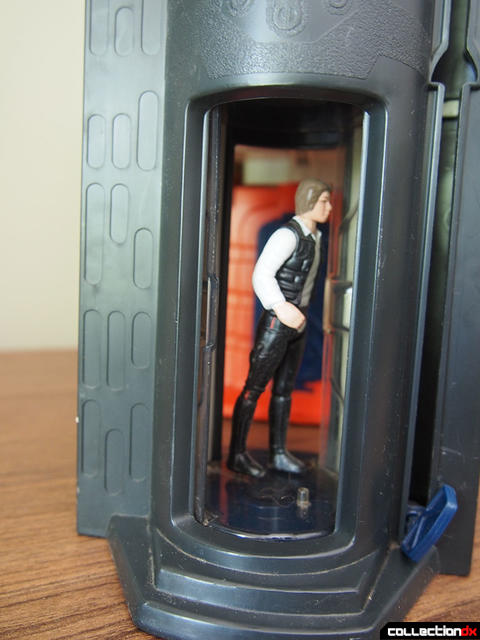 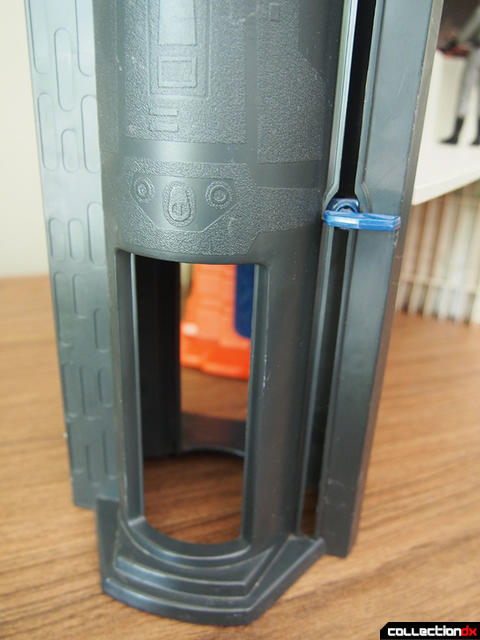 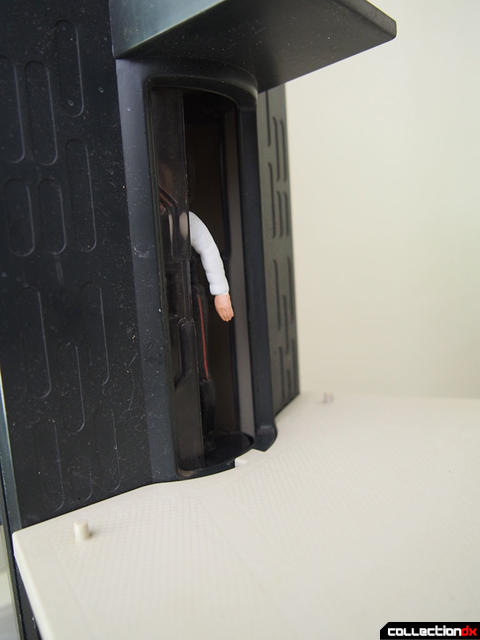 The care and attention to detail and play value blow my mind with this set. Remember, we did not have DVDs or cable back then, we could not watch Star Wars over and over. We saw the movie a few times in the theater and then all we had were our memories. These toys galvanized those memories, and my nostalgia for star wars is as much through these toys as they were the movies. The designers at Kenner paid so much attention to the small design details, like the long vertical ovals that the Imperials used all over the Death Star - these are replicated in the girders used to support the floors, and on patterns printed on the elevator. And when the designers had to make up their own designs, like with the Dianoga, they made sure it felt like Star Wars. They were truly talented individuals who continue to create Star Wars toys to this day. Perhaps my nostalgia has made me think it's a better playset than it is, but for me, it's the greatest playset ever made.

Great review! The only vintage play set I own is Boulder Hill, which was also made by Kenner. Not as crazy about it as you are about this set, but seeing the design similarities makes me think they really knew what they were doing. It's still the most expensive piece in my collection.

I've been really wanting one of these lately, even though as I kid I didn't love it anywhere near as much as you did. I don't honestly even recall if I had one but I think a friend did and I just couldn't get past that it was only a section of the entire Death Star, even though I knew even then that a full version would be impractical.

Ha! That's hilarious. When I first saw them put together, I thought it reminded me of a Terrordrome!