Deadpool is the 8th figure in the recent X-men Juggernaut wave. He comes packaged in the standard Legends window box. 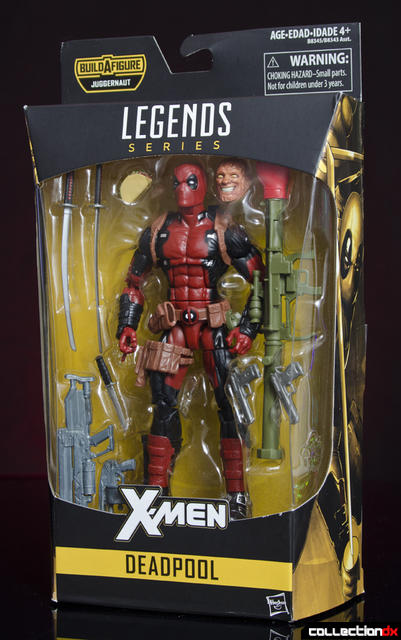 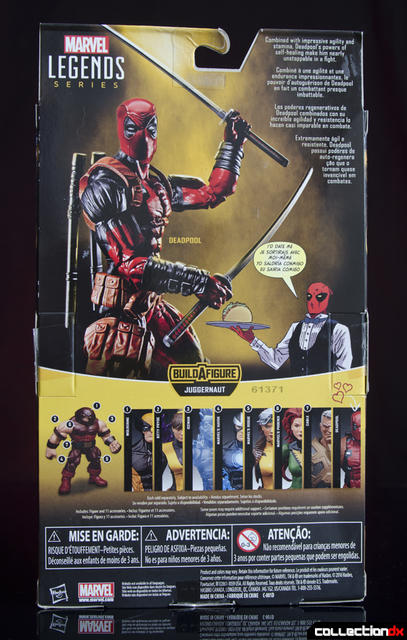 Although deadpool is part of the Juggernaut wave, he does not come packaged with a build a figure part. Instead, he comes with a literal arsenal of weapons. Included with Deadpool are two pistols (with waist and thigh holsters), two swords (with back sheath) boot knife with sheath, automatic shotgun, generic sci-fi laser rifle, bazooka with removable boxing glove attachment, alternate unmasked head, and best of all..... a taco. When was the last time a legends figure came with so many accessories it couldn't hold them all at once? 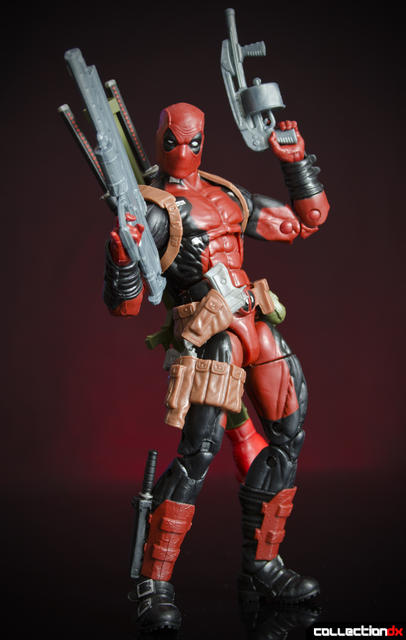 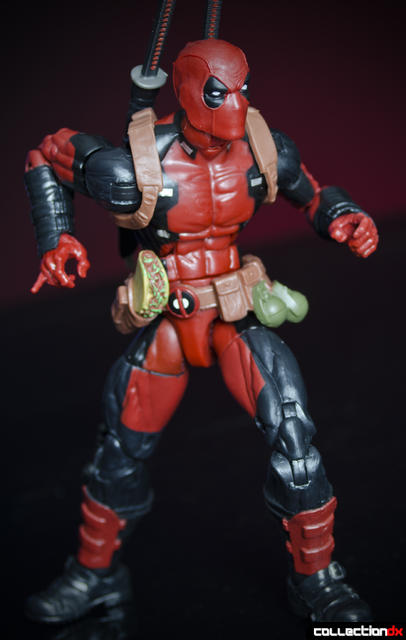 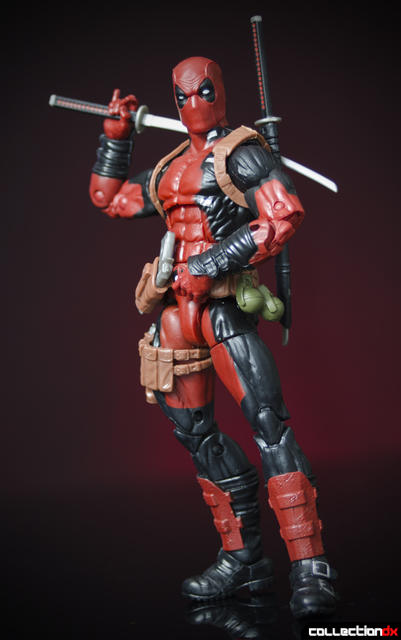 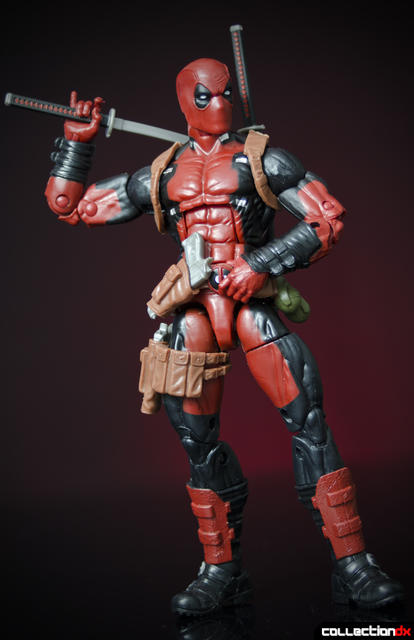 He scales very well with other legends figures. 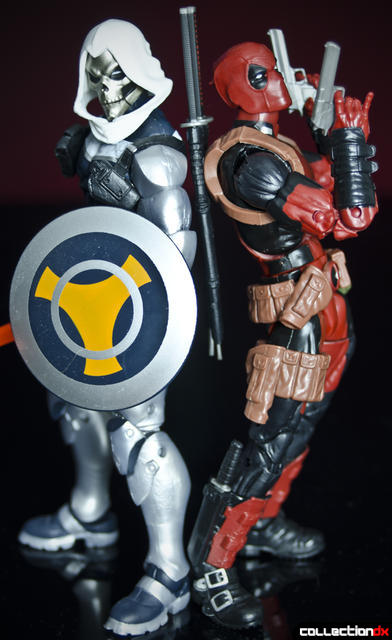 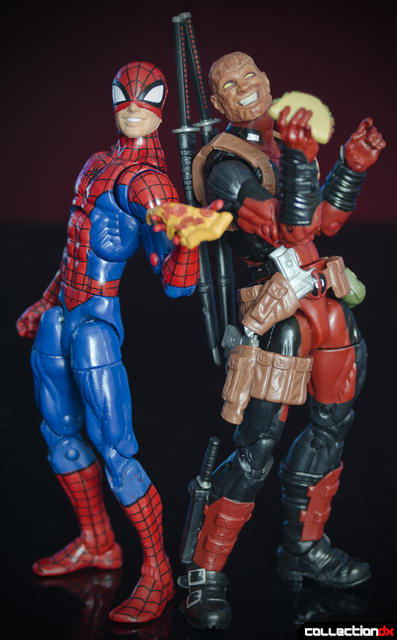 All of Deadpools paint apps are nice and sharp. The paint on the unmasked head is particularly good. The eyes and teeth are painted as close to perfect as can be expected and the whole head has a dark wash that gives the decayed flesh a realistic look. The only place where the paint could be better is that black around the eyes, were it isn't quit filled in all the way. Aside from that, his paint apps are some of the best ive seen on a legends figure. 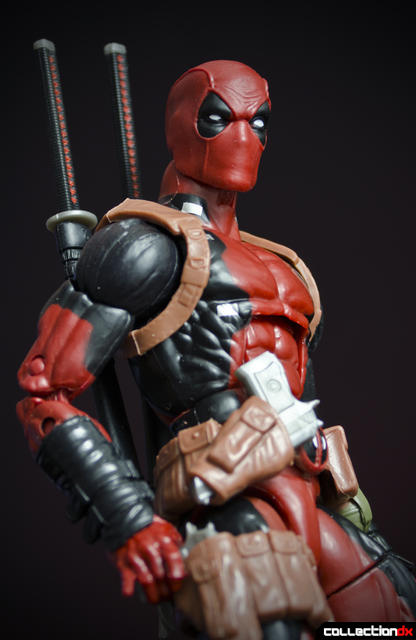 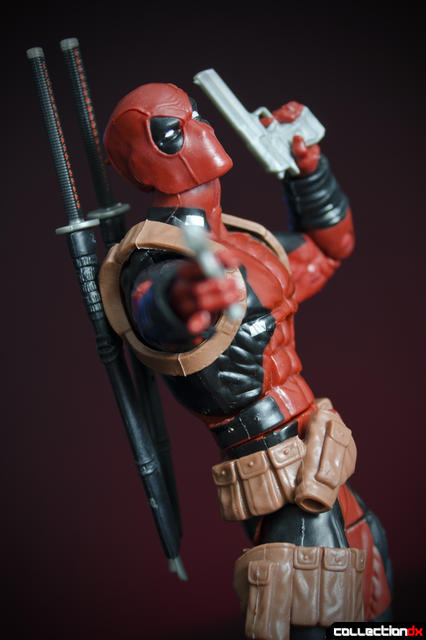 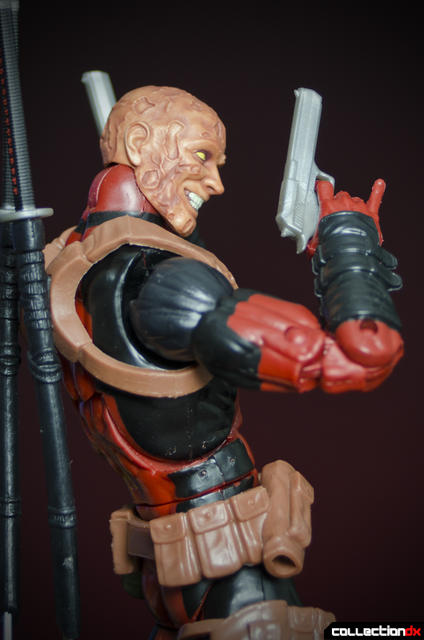 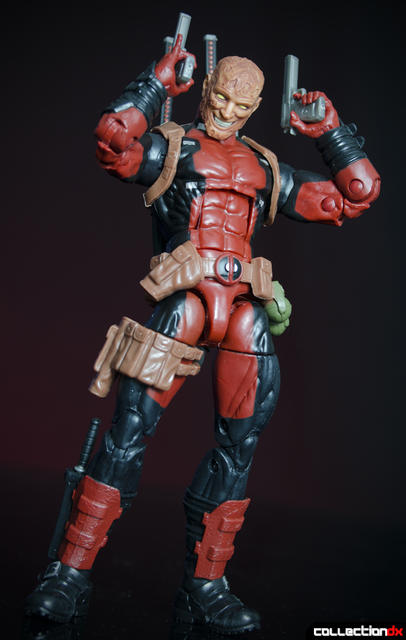 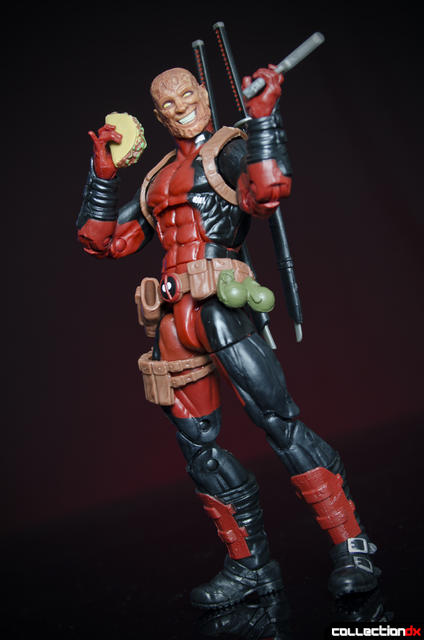 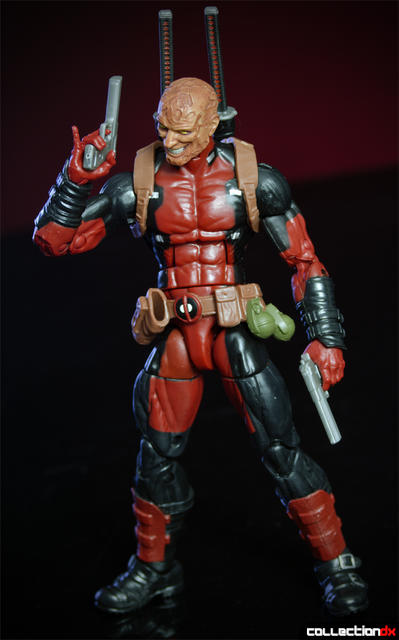 I love how expressive the hands are. They really bring a lot of attitude to the figure. 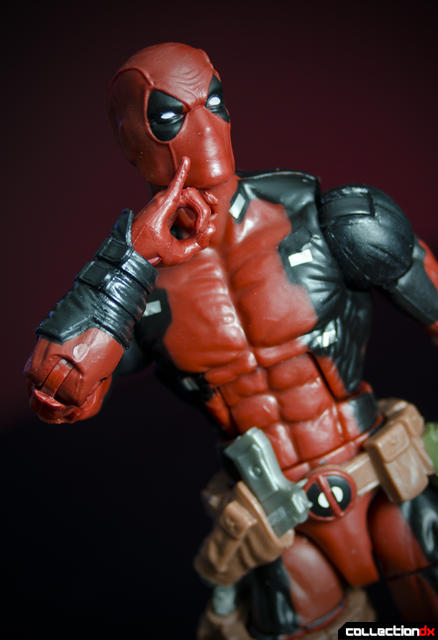 Articulation is just above average for a legends figure. He has excellent range in his hips, elbows, and knees. One thing that Deapool has that a lot of other legends dont is forward ankle tilt wich makes crouching or kneeling poses look much more natural. 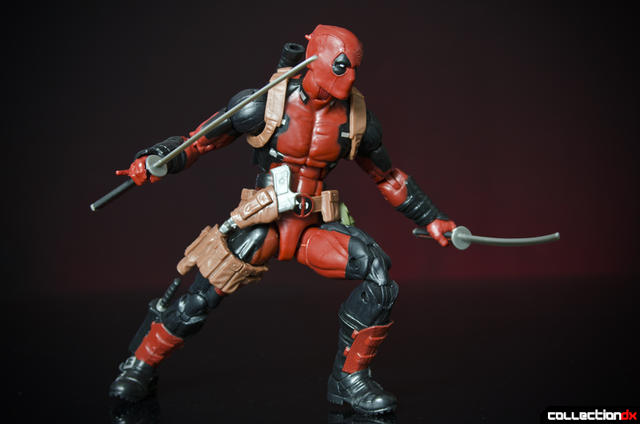 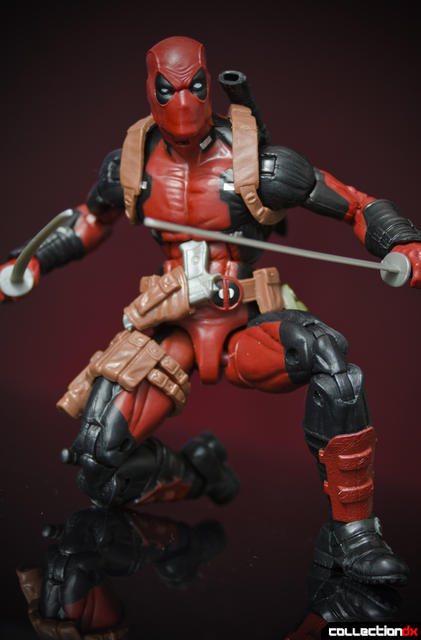 Did I mention the Bazooka? Because he comes with a bazooka. 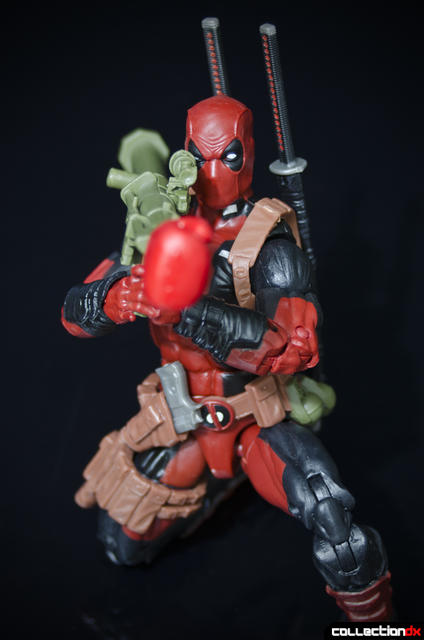 Generally my number one gripe with Legends figures are the lack of accessories, and Deadpool has that in spades, which begs an interesting question. Is it worth doing away with build figure parts if it means that we get this many accessories with each figure. For me, its an easy yes. 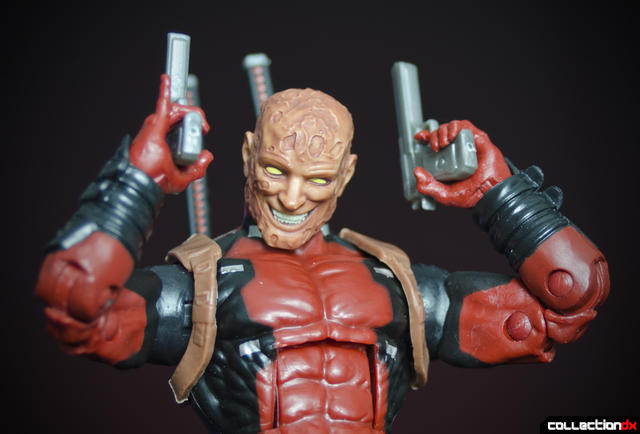 I only really have two small gripes with the figure. The first being that the bazooka is some what of a pain in the butt to pose with. The arms just can't seem to get into into a position where it looks natural being aimed. I could only really find a few angles where the bazooka actually looked good being held. The second is that Deadpool suffers from "wiggle hips" a common problem with the Legends line. Basically the T-bar inside the lower torso comes un-glued which makes the legs wiggle just a little. It's not a big deal and doesn't affect stability, its just mildly irritating. 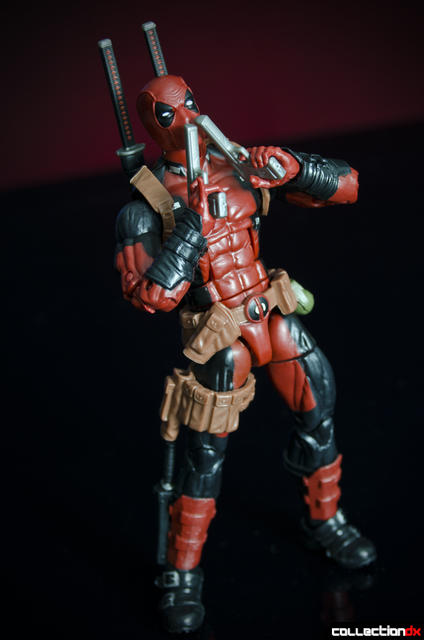 In a line of hit or miss releases, Deadpool is a bullseye. This really is Hasbro at its best, and just goes to show what the company is capable of. Deadpool should be an easy purchase for anyone even remotely interested in the figure. 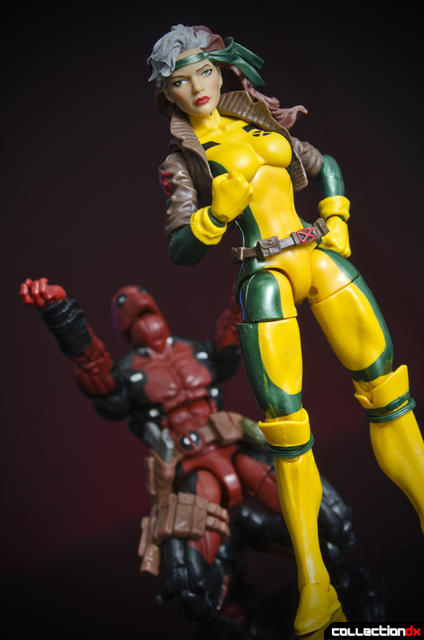 Huge thanks to Siningy for the Deadpool hookup!

I love that the boxing glove has the universal wrist joint, so you could in theory swap in other Marvel Legends hands as ammunition. So yes, he can launch Wolverine's clawed hand at someone.

I collected all of the early waves of Legends figures (before the rebrand years ago), but have only picked up a few here and there since. Not a huge Deadpool fan, but this is a stellar figure. I'll have to keep an eye out for him.

Agree that accessories are great, but making a great individual figure isn't what the BAF scheme is all about. So making it a value decision isn't really applicable. BAF gets people to buy the junk figures in each wave rather than cherry pick their favorites. From a business standpoint, it's rather ingenious.

Well, the obvious response there is that they need to make less junk figures. I mean, even "B" characters can make great figures they put a little thought into and include some nice accessories.

Maybe "junk" is a poor word choice on my part. I didn't mean to imply poor quality. I love some of the braver "B" character choices they've made over the years. But they're still "B" characters--the ones that are less popular and therefore will clog the pegs. BAF helps reduce that. And I guess I prefer that to an Iron Man and Captain America redeco in every single wave. Ideally, they'd just short-pack the more obscure characters, but then collectors would complain since everybody knows nothing sells a figure like "rare". LOL

It would be awesome if every single figure was stellar, but that's unrealistic (accessories or no).

Yes. He should be an easy purchase. But I can't find the damn guy any where.

The word is that Hasbro will be shipping full cases of him to retailers in October the way they did with Black Panther.