As most folks around here know, we like toys. Not that big of a stretch, huh? ;) 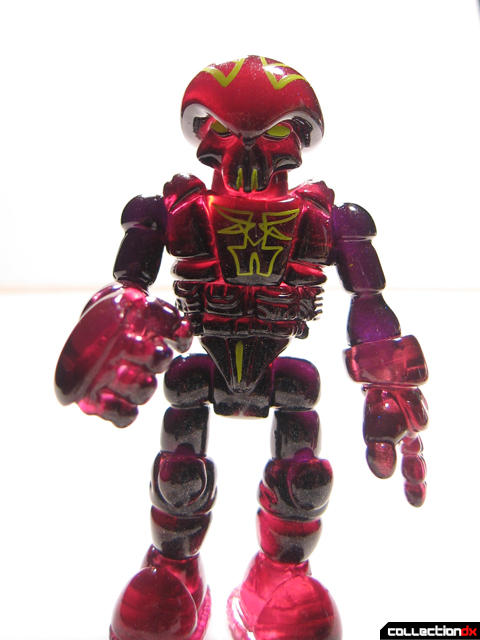 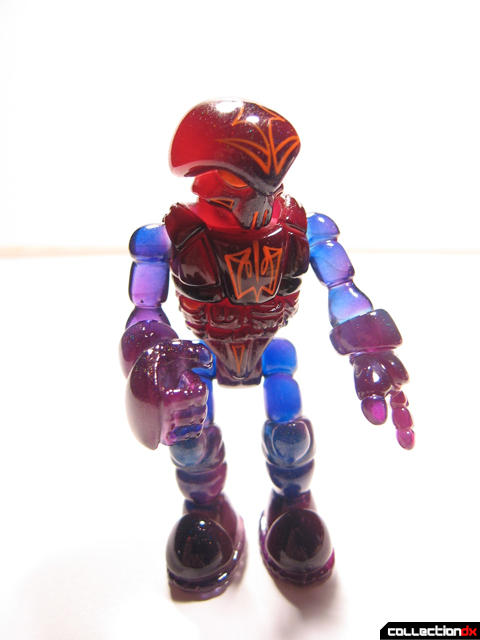 Matt Walker, also known as Dead Presidents, is both of these things: talented and local. 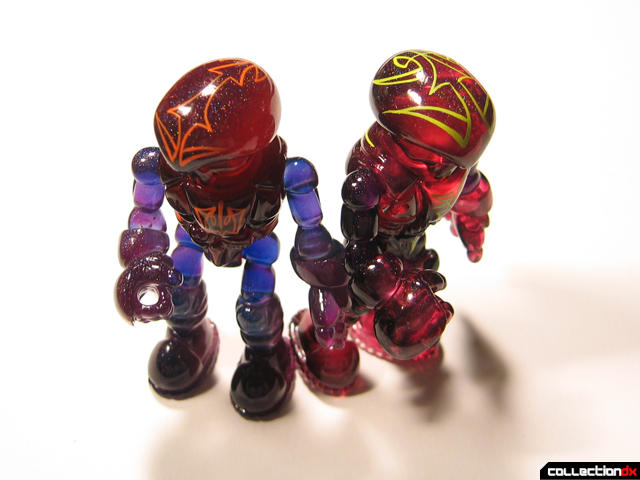 I first became aware of "Dead Presidents" a year or two ago as one of many board members on Skullbrain, but it wasn't until I met Connell "plastichunter" Little at SDCC08 that I came to realize how incredible a kaiju painter he was. Connell--a super friendly dude and a helluva guy, himself--showed me some Secret Base piece or something like that that Matt Walker had painted for him. In the mad rush that is Comic-Con, I couldn't really take the proper time to appreciate it, but it honestly looked like a jewel. It had a hard, glossy shine to it, and the color was a deep burgandy with metal flake throughout. It almost looked like the surface of a new car in a showroom! 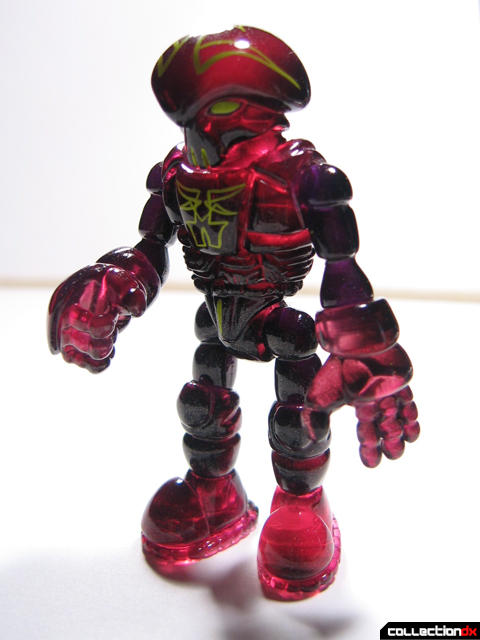 And that analogy makes perfect sense, as Matt's day job is pin-striping automobiles and motorcycles. This talent shows in his work. 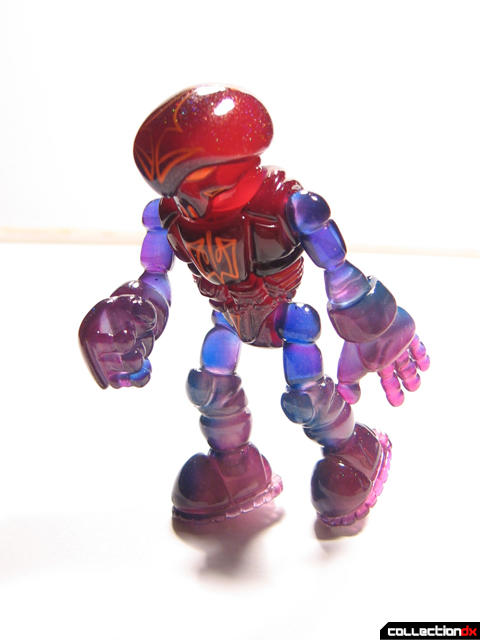 Fast forward to last Friday night. The plan was to gather up some vinyl collectors in the Boston area, chew the rag, and talk toys. One guy I discovered through a sale who lived in the area was Matt Walker--Dead Presidents, himself. When we suggested the plan to meet at Matt Doughty's place, Matt W was all for it! 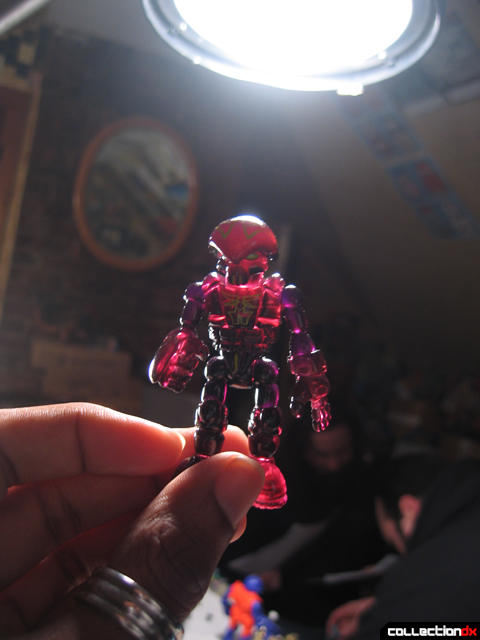 As it turns out, the Matts had met at Comic-Con this past summer (dunno how I missed Matt W while there). Matt Doughty had given him a couple Pheydens to mess around with, and as you can probably guess from all the pics in this article, he did a magnificent job! 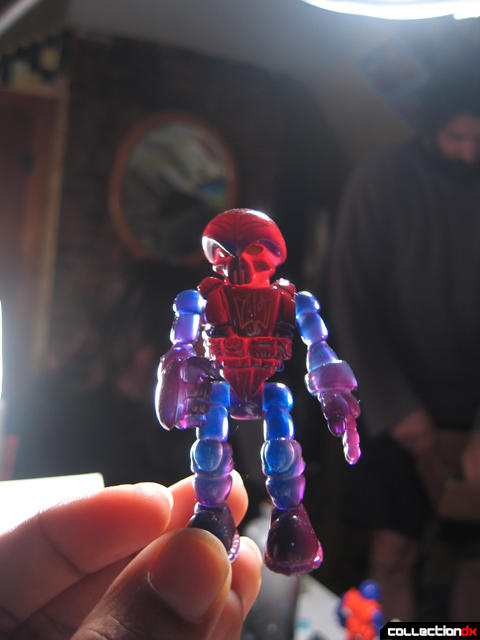 Luckily for me, I had my camera on me when Matt W presented Matt D with a cool pin-striped mini lunchbox (which I failed to photograph). Inside the lunchbox were the two Pheydens--almost completely unrecognizable with their new paint jobs. 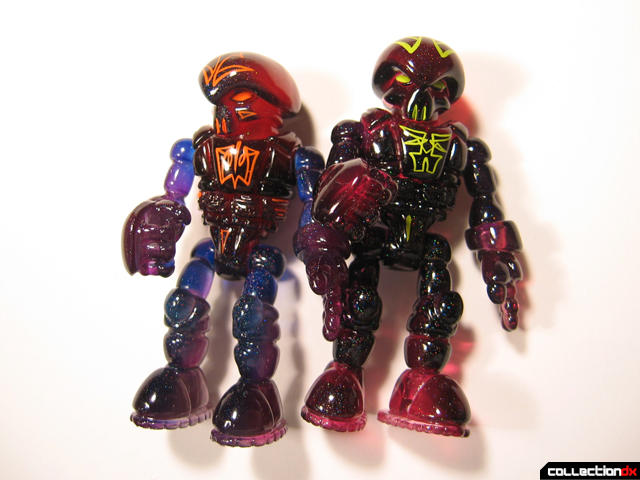 Well, technically, these weren't painted, as Matt explained--they were actually dyed, sprayed with glitter (yeah, that sure isn't dust in these pics!), pin-striped, and clear-coated several times. The result is a super-hard surface that's almost like glass. The colors were incredible and almost seemed to shift in the light as you moved the toys around. 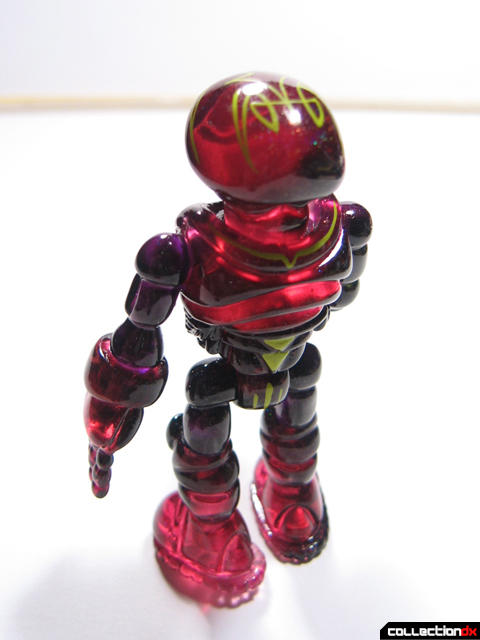 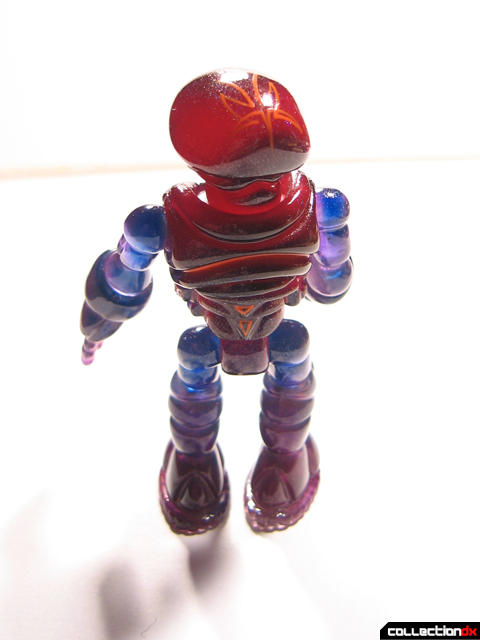 The effect on these tiny 2.75" figures was amazing! Just the dye job is incredible. The colors blend beautifully with the natural translucent PVC of the figures. The glitter's effect is stunning as each fleck catches and reflects light differently. And the hard gloss clear coat makes every surface look like...candy! 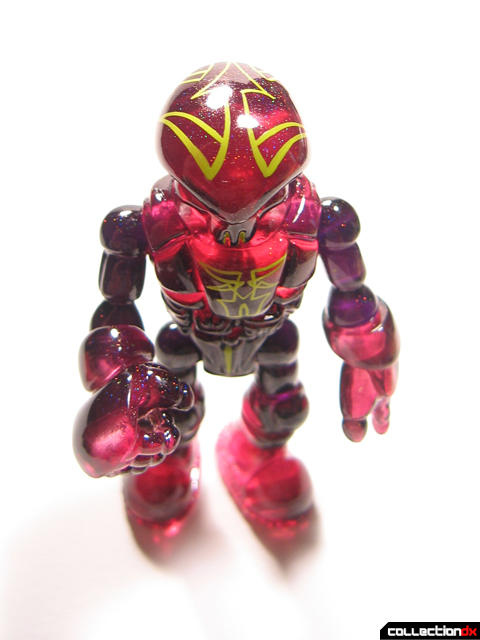 Now, you add the fine pin-striping, and you really have a unique work of art in your hands! One Pheyden was detailed with lime green; the other with orange. The patterns are classic and I'm afraid that these haphazard pics don't do these toys justice. Holding these toys in-hand is a whole new experience for Glyos collectors. The hard finish combined with the fine detailing puts these in a new class of "action figure". 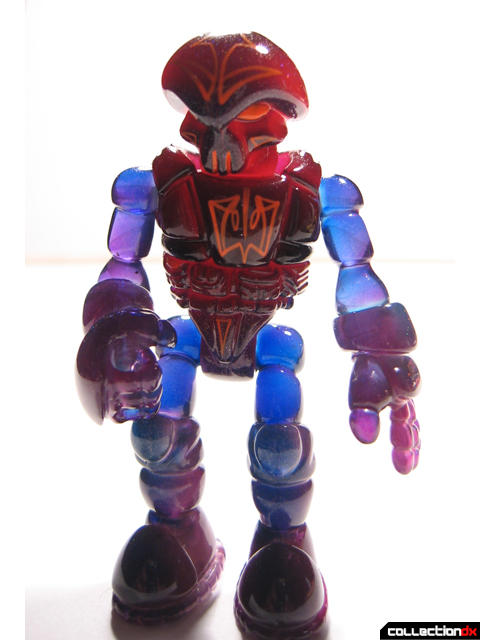 The best part of all is that these figures are fully functional as Glyos toys! That's right: not only are they just as poseable as their stock counterparts, but they can be disassembled and put back together in crazy configurations as much as you like. The joints' fit functions operate fine as no dye or glosscoat had seeped in. We spent a bunch of time pulling them apart and popping them back together. Not only were the joints flawless, but the normal toy "abuse" we put them through didn't mar the custom work one bit...

Granted, we weren't about to whip these against a wall or anything. Doughty probably woulda murdered us! ;) 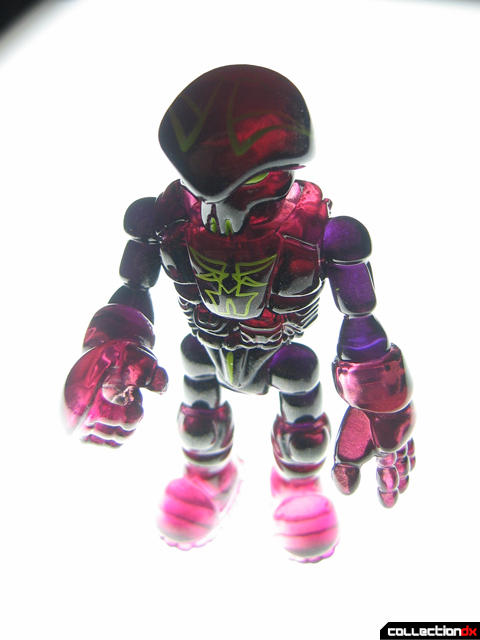 And since there was no way I was removing these from that house without taking on Doughty, my only hope to enjoy these guys was to take pics...and plenty of 'em! ...And, of course, share 'em with you guys! 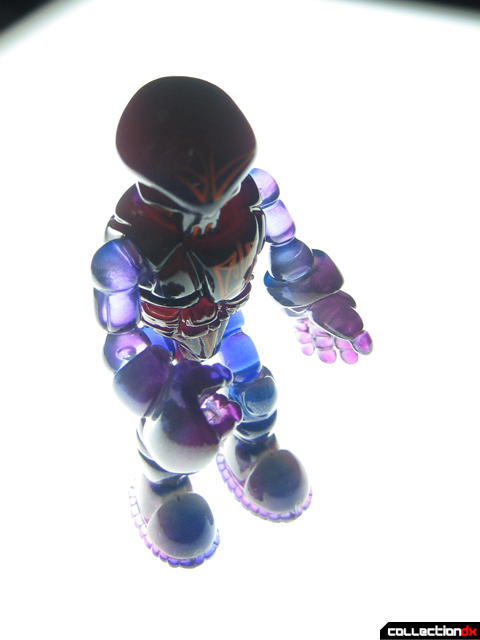 By all means, if you get a chance, hop on over to Glyos.com to see what's shaking with Matt Doughty's world of figures. If you're interested in seeing more of Matt Walker's work, definitely give his blog some face-time. He currently has a jaw-dropping custom Eyezon available that he and his good friend (and ours!), Mark Nagata, collaborated on. 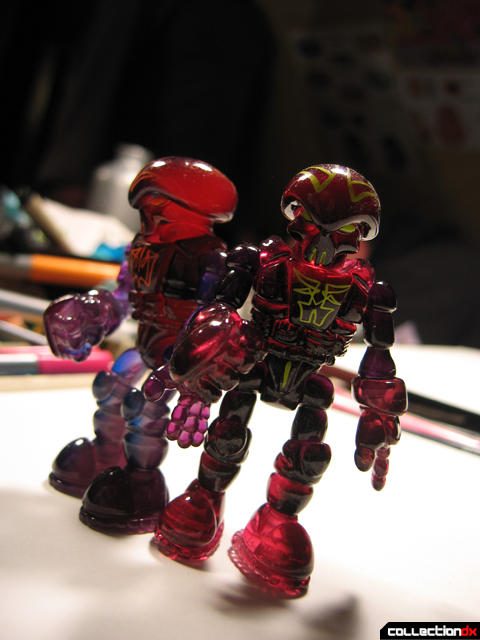 We're happy to add Matt "Dead Presidents" Walker to our list of local buddies, and we see nothing but good stuff on the horizon for this beastly customizer! And who knows...maybe someday the rest of us will be able to get our hands on some Dead Presidents-custom Glyos figs...! 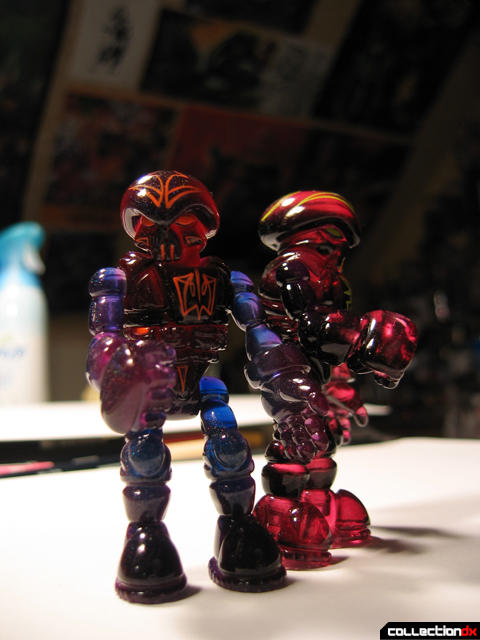 I was so disappointed when I got to the end and found out there wouldn't be any for sale, ha!

Seriously awesome stuff. I'd do anything for one of these...

I'm kind of thinking I ought to do that...maybe a "Ranic Pheyden Full Camo Mode"...

If/When there's a limited run of Dead Presidents hand-painted Glyos figs, I'm all over 'em! May even get some one-off customs, too..!