Dead End completes Hasbro's initial offering of Combiner Wars Stunticon underlings. This modern rendition of the team's resident smarmy fatalist will serve as the basis for both Wildrider / Brake-Neck and Protectobot Streetwise. So far, these road-terrifying Transformers have all been great toys. Will Dead End keep the trend going or will the character's own negativity bleed into his figure? 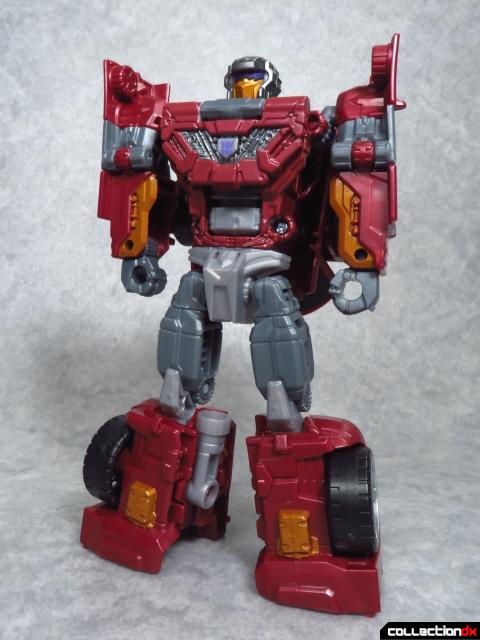 This dreary Decepticon matches his buddies size-wise, and stands five and a half inches tall. Like Breakdown and Dragstrip, Dead End is a well-designed update on the classic character that combines aspects of his original toy and cartoon designs. 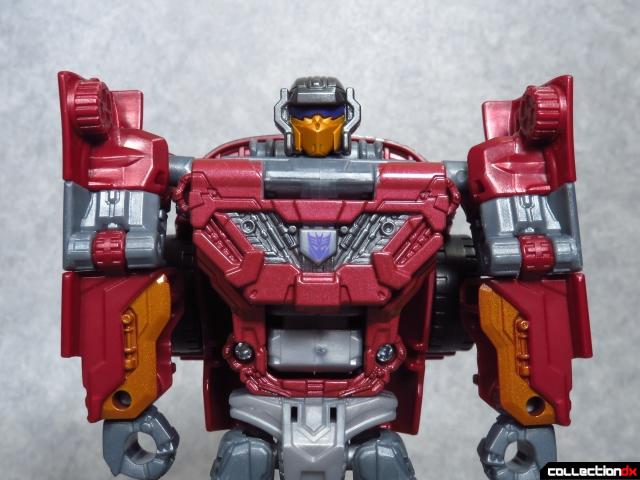 Most notably, this figure's head has the faceplate and cool shades as seen in the old TV show. Detailing is very nice all over Dead End and he has very clean paint apps. 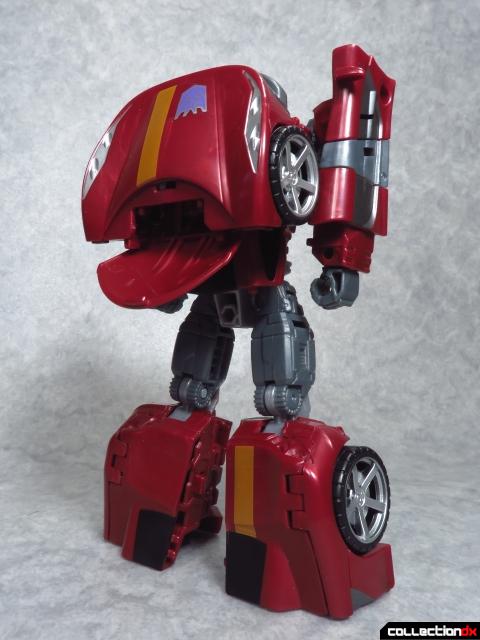 And in the tradition of Scramble City, Dead End wears a chunk of his car mode as a backpack. While this toy definitely looks the part, things started to get a little gloomy when I began handling it. 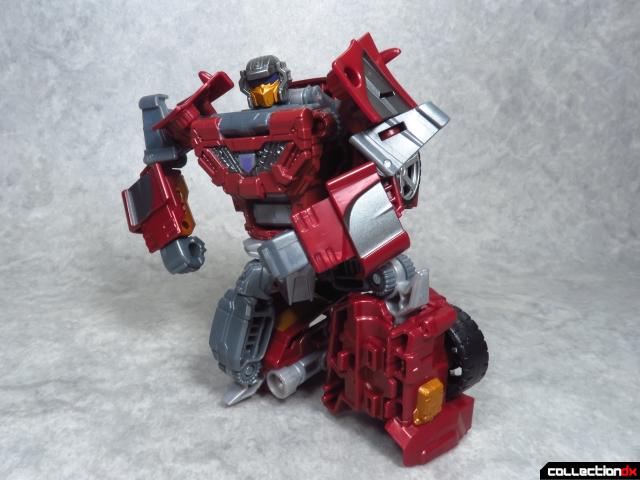 Dead End's articulation is on par with the other Combiner Wars limbs, but has deeper bending knees than most which lets him do a very natural looking kneel. 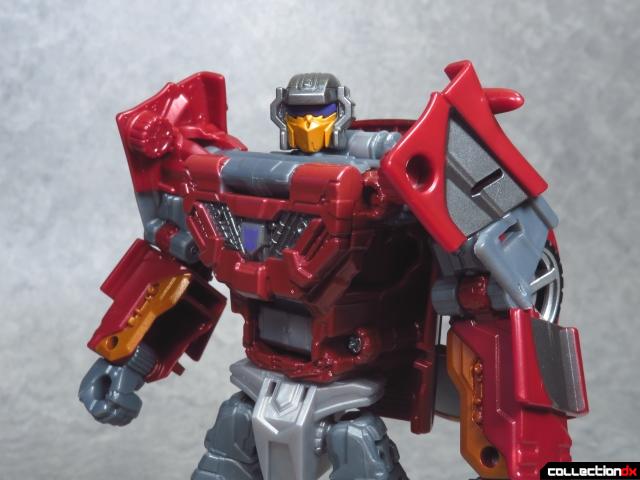 You may have noticed his upper arms have a weird angled cut where the bicep rotates. I found that if you leave the joint parallel to the ground, his arm movement will seem more natural. There's even a bit of detailing in the elbows to make everything seem continuous without having to leave Dead End's arms as one long block. 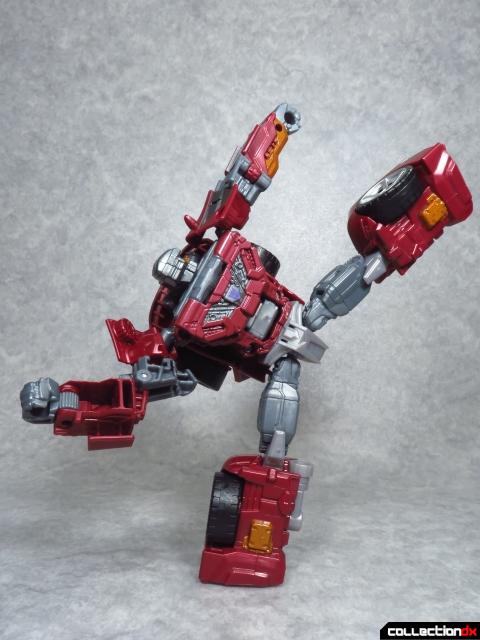 While the toy can easily do a high kick thanks to its unhindered hips, in posing it like this I found that Dead End has loose joints all over. In fact, it feels like the plastic tolerances for a lot of his parts are just a little bit off. The toy is not uselessly floppy, but there is a noticeable drop in tightness when compared to the three other Stunticon limb bots. This may be easier to see in my video review. 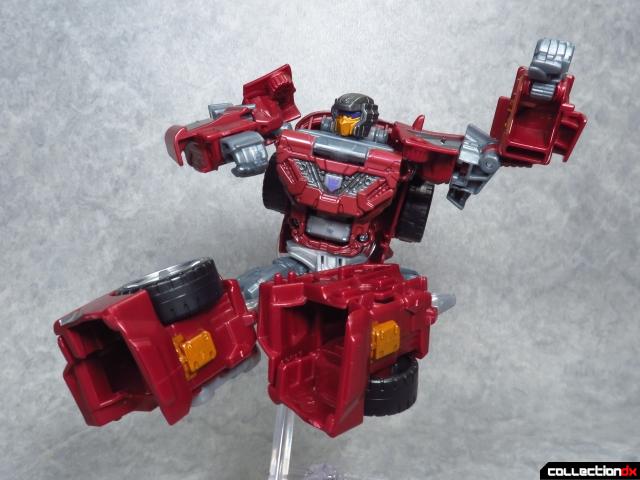 He also has a 3 mm port in the back of his waist that should be usable by a Tamashii Stage, but is too wide to form a solid connection. I had to break out the regular figure clamps just to do this Doomed Kick. 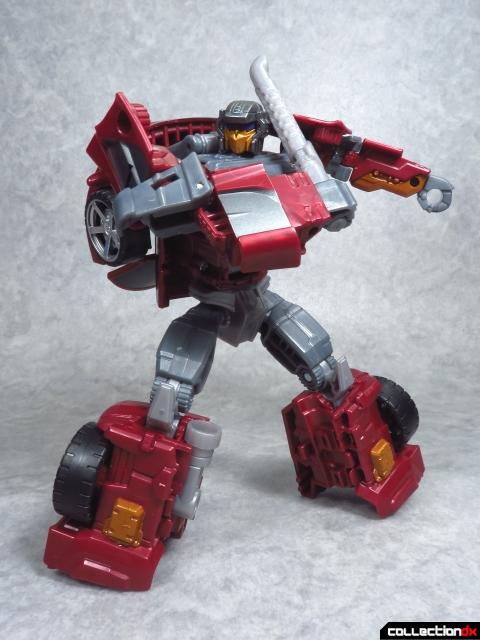 Dead End's weapon of choice is a big ol' exhaust pipe he probably pulled straight out of the planet of junk. It is a simple piece of gray plastic that perfectly fits the Stunticons' image of being robotic street punks. 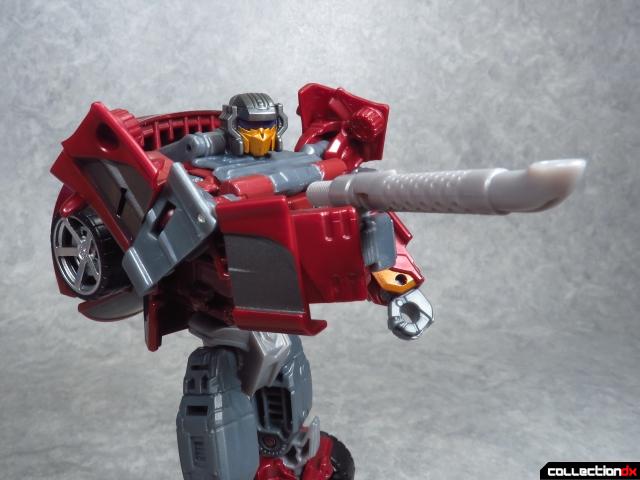 An extra peg near the base of the pipe is meant for attaching it to his shoulder, but can also be used to hold it like another kind of pipe. Now Dead End can act like the cyber-beatnik he is and deliver fatalist diatribes between puffing on a fancy e-cigarette. 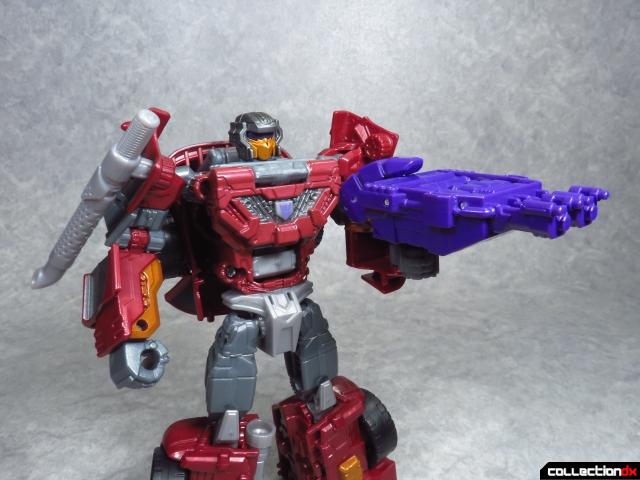 Dead End's version of the combiner accessory is some kind of '90s FPS weapon with twice the gun barrels. 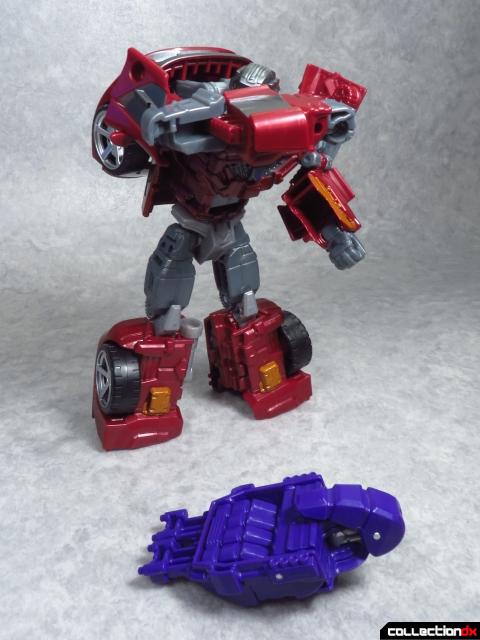 It is with this weapon that the iffy plastic tolerances start to take away from the fun, as Dead End cannot get a firm grip on the gun's hand peg. Nothing could be more more mortifrying... er, mortifying for a Decepticon than having butter fingers. 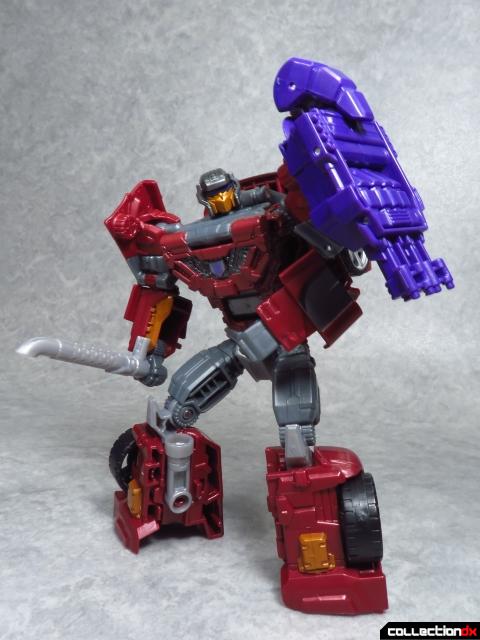 You can also plug the combiner accessory into his arms to act like a shield. This configuration works a bit better on my figure, but the connection is still looser than it should be. 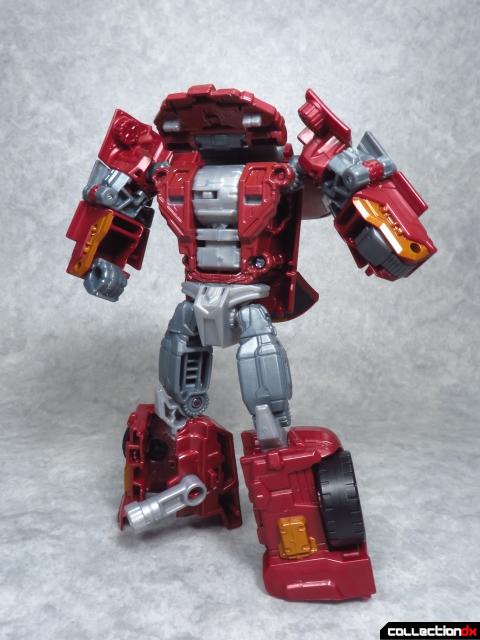 Dead End's transformation is similar to Breakdown's in that his head and chest flip up to fold away into the car front backpack. This exposes the combiner joint and gives the figure a more G1 toy-esque look. As you fold Dead End's hands into his forearms, you'll notice that they move on a ratcheted joint. It seems a little silly that this minor part of the conversion has some of the most robust joints but that's how this toy works. Small tabs on the end of Dead End's now handless arms guide his limbs into small slots just above his waist to keep them out of the way for arm mode. Finally, the outer panel on his right leg is opened up to allow the combiner accessory port to flip down and become a wrist. 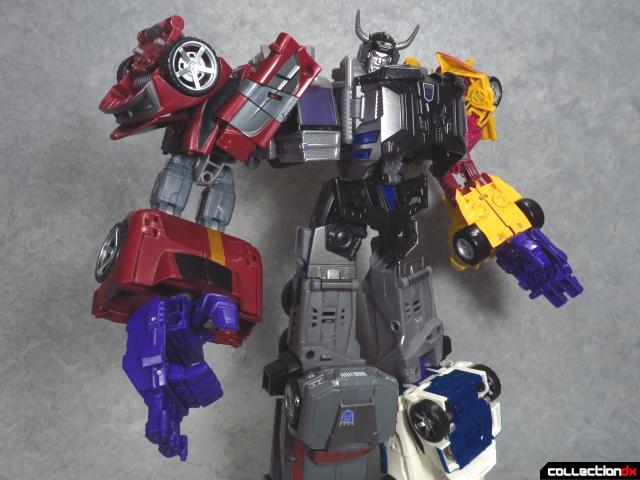 This Stunticon makes for a competent Combiner Wars arm. All of his own parts stay far enough way from Motormaster so as not to interfere with Menasor's articulation. 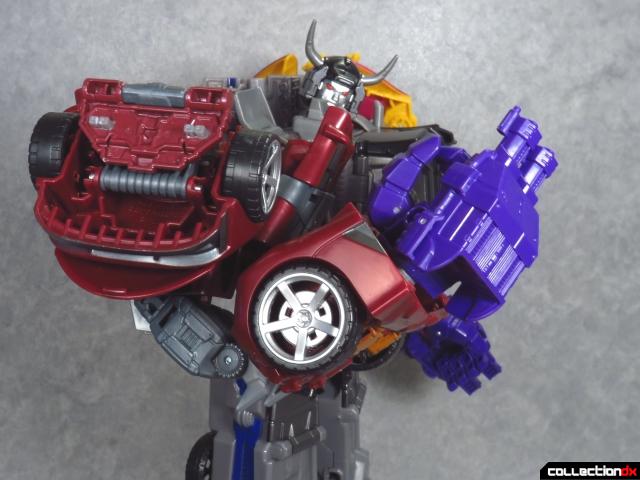 Out of his limb teammates, Dead End has the deepest elbow bend when he is an arm. Sadly, the iffy build quality on my figure means any articulation not provided by the ratcheted combiner joint is a bit loose and fiddly. Needless to say, Dead End does not get to hold Menasor's sword. 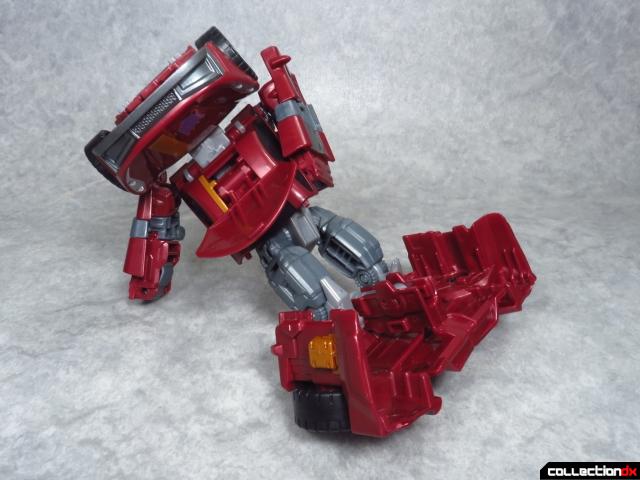 For leg mode, Dead End's waist spins around 180 degrees and his shins open up once again so they can fold around his thighs and form the rear of the car. The combiner port is flipped around so it becomes a tailpipe. Like with the other Decepticon car-based limbs, Dead End's arms tuck inward to form the sides of his vehicle mode. 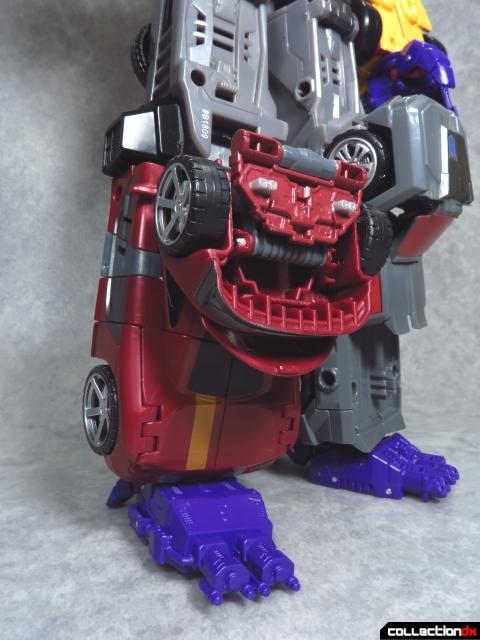 Dead End is, again, a competent leg for a larger robot. However, the loose connection between the foot part and Stunticon means he is a bit of a liability during poses. My Menasor can stand alright with Dead End below the waist, but I prefer to just use him as an arm to avoid any stumbling. 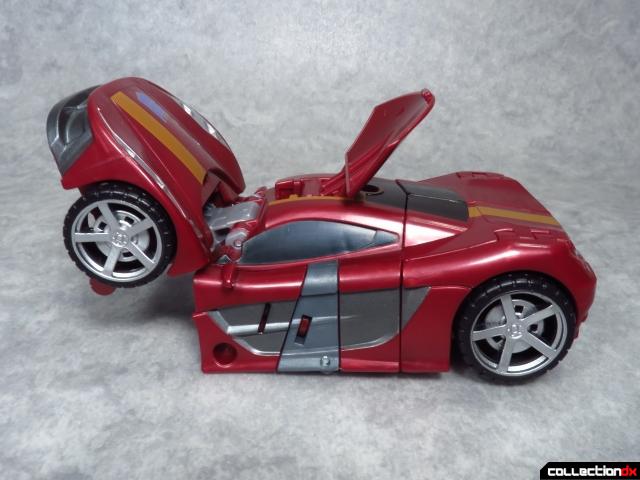 To complete vehicle mode, the front section of the car is maneuvered downward so it can tab into Dead End's upper body. The front windshield then flips down to lock everything in place. 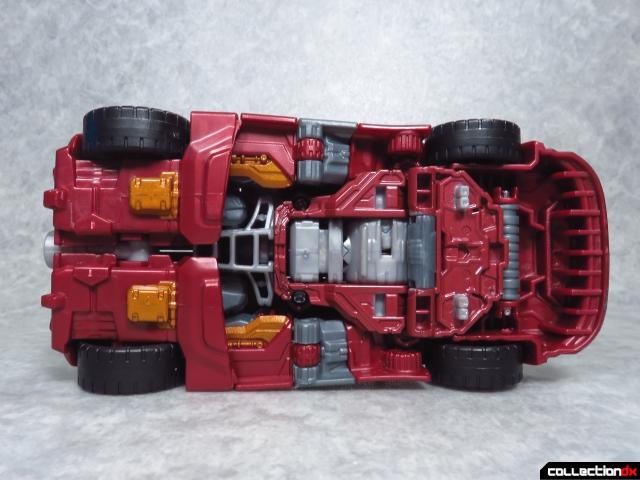 Dead End's "tech-bib" is positioned so that the hinged portion is pushed against his chest. When I first transformed my toy into car mode, I noticed some excess plastic in the area where one of his legs clam-shells together which seemed to be preventing the rear of the vehicle from coming together tightly. Things got a little better after I scraped off the imperfections, but it still feels like something is off. 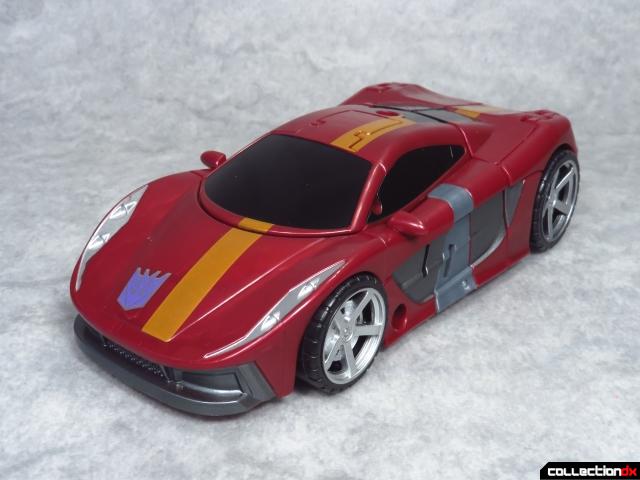 Issues aside, Dead End is a good looking car that resembles a Ferrari 458 Italia. 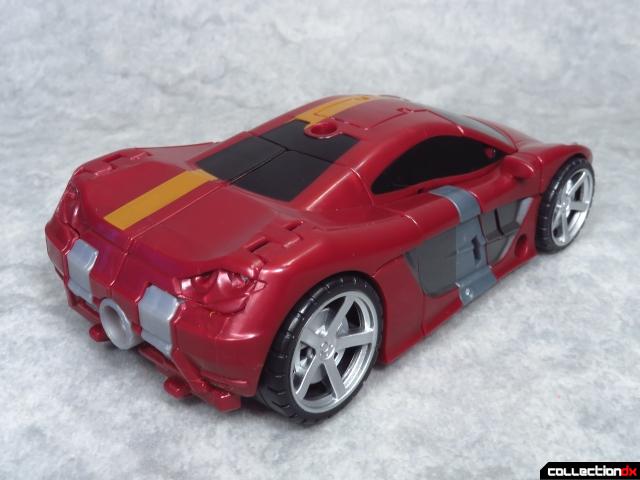 It's similar in shape and style to the 80's Porsche he used to be and comes together well enough to feel like a playable toy. 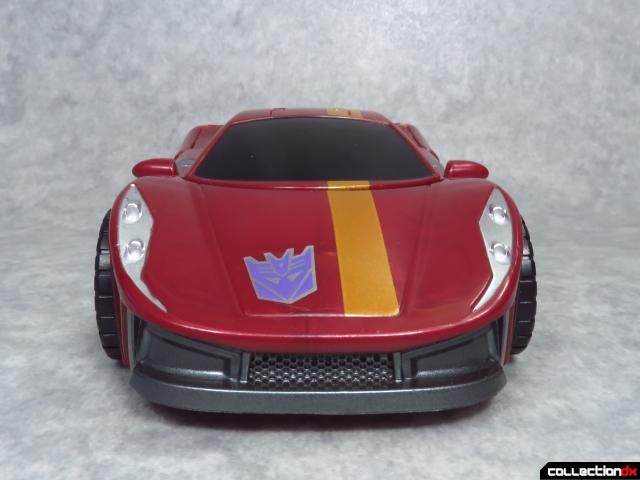 Dead End's colors are spot on and he has a clean mustard colored stripe for G1 inspired flavor. I also appreciate the tampographed Decepticon symbol that has the look of a foil sticker. 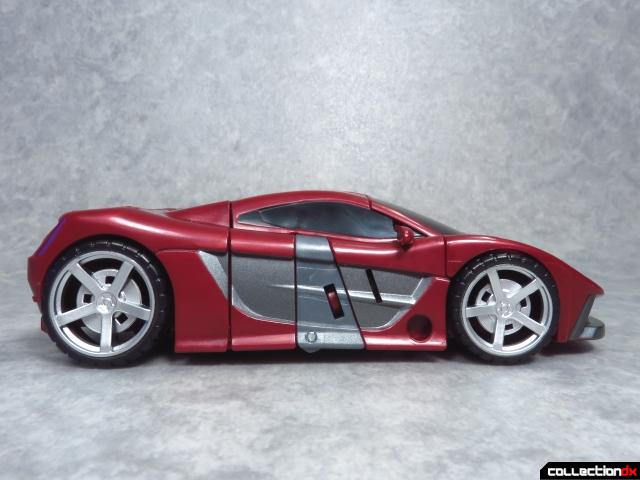 The paint scheme isn't completely perfect, though, as Hasbro's stinginess means this gray section on either side is left bare. I don't think it's made from unpaintable plastic as TakaraTomy's Unite Warriors Dead End appears to have the part of his arm color-matched to his body. 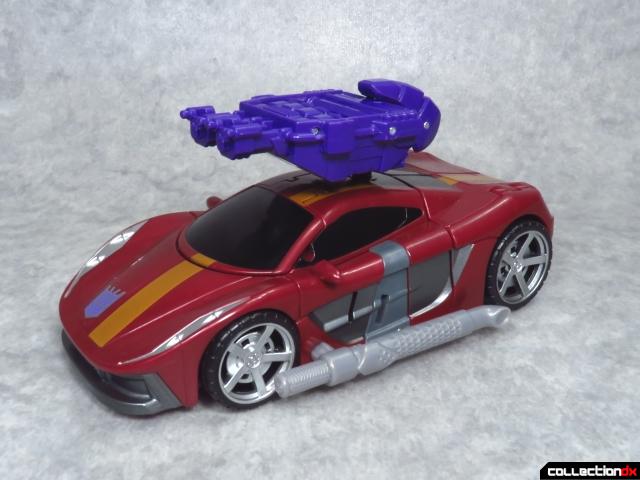 Both of his accessories can be stored in vehicle mode. The rooftop connection to the combiner part is actually decent and not floppy like the other ones. 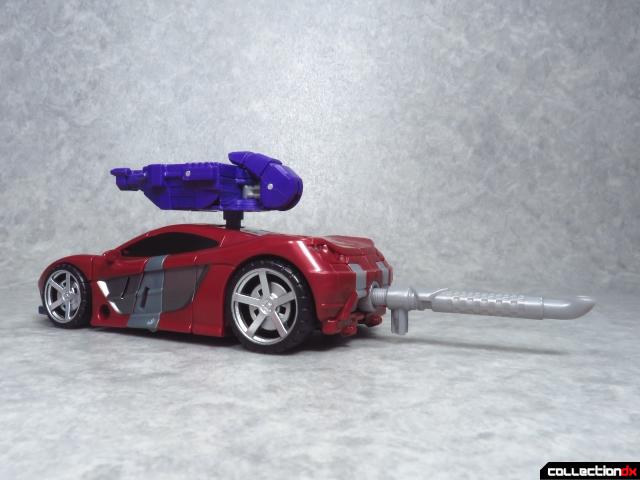 While the exhaust pipe looks best stuck on the side, you can also attach it to Dead End's rear end for some hot rodding goofiness. 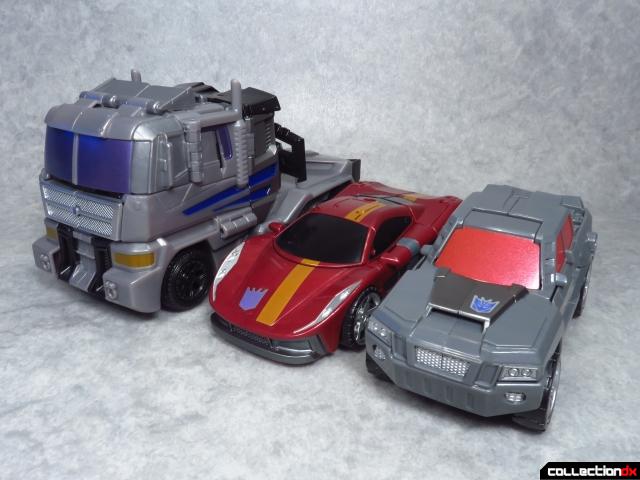 Size-wise, Dead End is in the middle as far as vehicle mass when compared to his teammates. 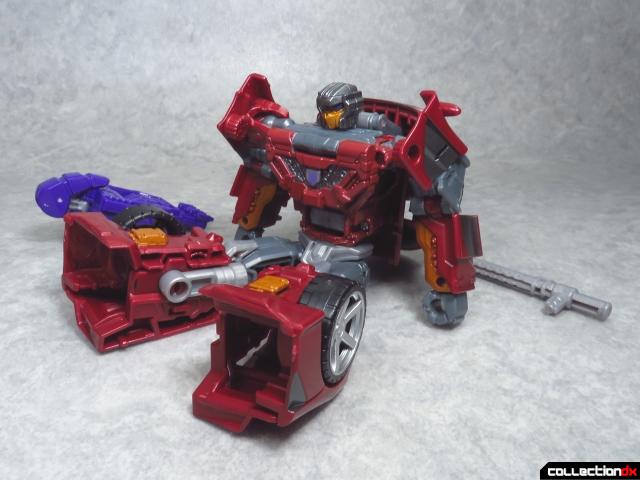 "If Motormaster doesn't want me to combine, I'm doomed."

Combiner Wars Dead End is a figure that I really want to love, but the quality control issues with mine make him the weak link in my Stunticon team. It is not a terrible figure by any stretch, and I honestly think it's quite a brilliant toy design. However, after owning four other CW limb guys with rock-solid build quality, getting a bum toy is just disappointing. I hope that this is an isolated incident and that even if it isn't, Hasbro and TakaraTomy will tighten up everything before going all in with re-purposing Dead End's design for Streetwise and Brake-Neck / Wildrider.

3 comments posted
You're not the only one

I just opened mine up last night, and he's the same. I wouldn't call him loose, but he's definitely not rigid. It's like he was "broken in" at the factory before I got him. However, this doesn't seem to be isolated to him, because my Offroad is also in the same shape, right out of the package. So maybe not every Deadend is doomed after all. I'm definitely getting the Takara set too, so I see that as better insuring the survival of Deadend as a species.

They seem to have fixed things up with Streetwise at least. I'll be covering him soon.

I got one of these guys the other day, and I also noticed that his legs don't fit together very well in car mode. In fact, if I try to push them together tight enough to close up the gap, something gets goofed up underneath and he won't roll across my desk anymore.