Warning: the following review contains spoilers for the latest series of Doctor Who starring Matt Smith as the Doctor. 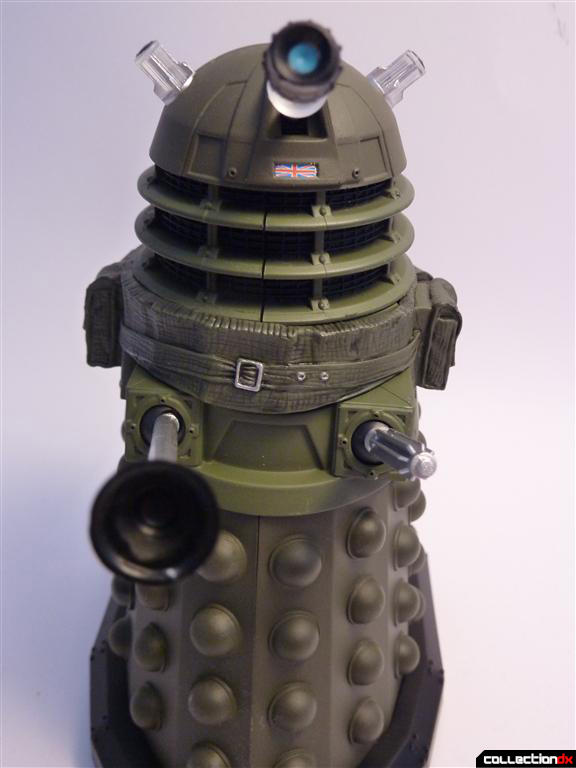 “Victory of the Daleks” is the third episode of the fifth season of the new Doctor Who series. In the episode, the newly regenerated Doctor (played by Matt Smith) pilots the TARDIS to 1941 London, in response to an urgent phone call from none other than Prime Minister Winston Churchill.

Upon arrival, Churchill informs the Doctor that he has acquired a new, potentially war-winning weapon with which to fight the Nazi menace. It’s not long before the Doctor is horrified to discover that Churchill appears to have made a deal with the devil, and what the British call “Ironsides” are in fact the Doctors oldest and deadliest foe...

Being interested in World War II history, I thoroughly enjoyed “Victory of the Daleks”, with its many knowing nods to British derring-do in war films and the unforgettable spectacle of seeing Spitfires flying into space to dogfight a Dalek warship! Although I don’t generally collect Doctor Who merchandise, I really liked the look given to “Churchill’s” Daleks and snapped one up.

The main attraction of this figure is the olive drab colour scheme the Daleks acquire in British service, and the discreet Union Jack flag just under the eyestalk. As Steven Moffat (executive producer of Doctor Who) has commented, there is just something rather sinister but “right” about a “squaddie” Dalek! 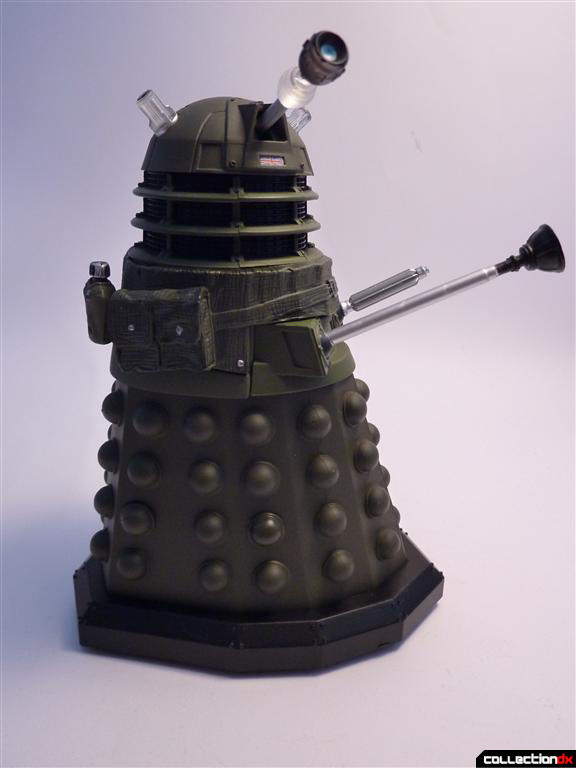 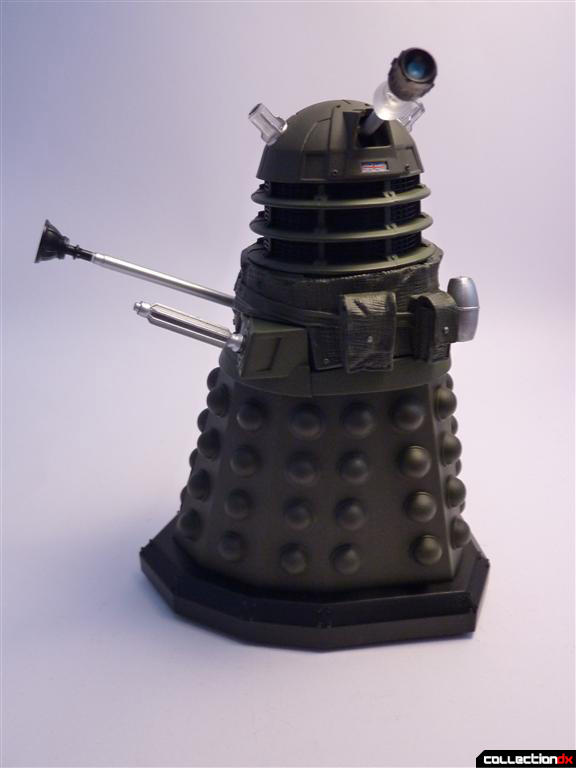 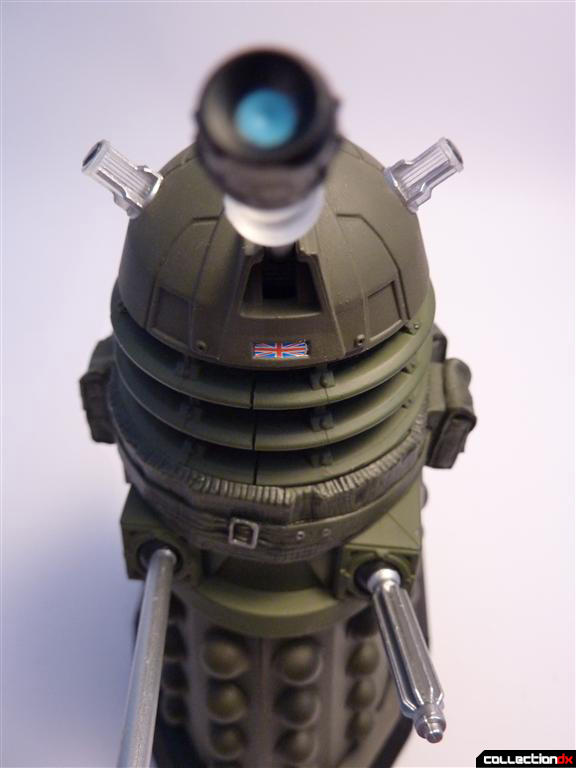 The figure is scaled for the current 5” line of toys produced by “Character”. Not surprisingly, being all plastic the figure is very light, the only metal being on the screws in the base. The design of the Dalek itself does not leave much room for a great deal of poseability; the head turret revolves and the eyestalk moves up and down. The Daleks ray gun and suction cup arm also have a limited degree of movement. I was initially rather reluctant to try and move the suction cup arm as it seemed rather snappable, but a small amount of pressure loosened the ball joint its attached to. I would still be a bit careful about wrenching it around too much, though. 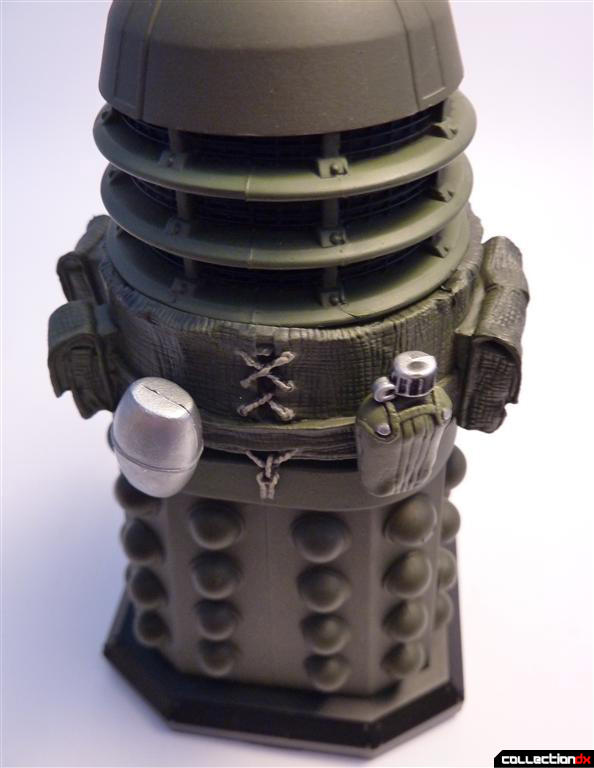 Although in the Christopher Eccleston run of Doctor Who, it was demonstrated that Daleks have a mid-section “turret”, this part is fixed. A detail this Dalek has that is unique to it is a moulded canvas equipment belt for carrying water bottles and other items needed by “Tommies” in the field. On this figure the belt is painted mostly the same green as the body (excepting a couple of silver water bottles) but in the actual episode the belt and pouches are actually a brown colour.

Detailing is pretty good, including various ties and belt holes on the pouches, a nice blue “eye” and, of course, that all important Union Jack flag! 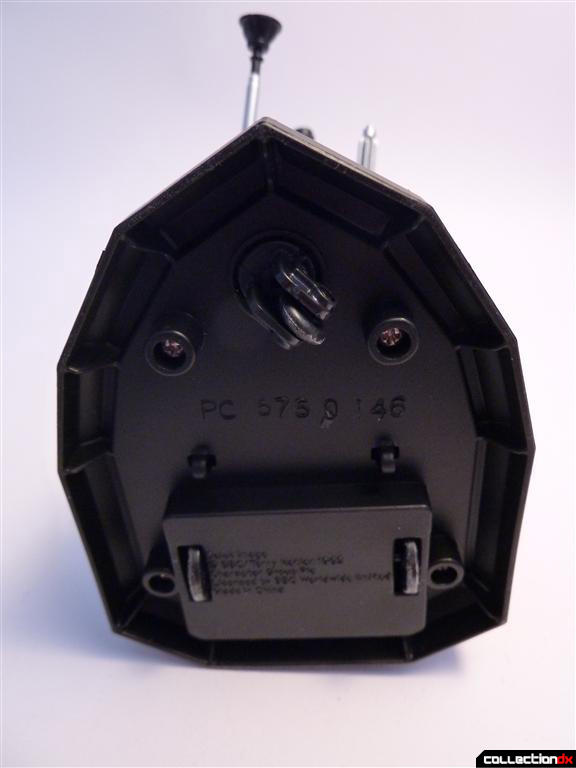 An additional play feature is a set of three wheels mounted on the underside, so that the Dalek can be pushed along in pursuit of the Doctor. The Dalek will roll if pushed but will not “glide” on carpet, though a small shove on a smooth surface like wood will send it on a wobbly path to EX-TERM-I-NATE! its foes. The front wheel is moveable but the rear two are fixed.

Although I like the look and general detail of this figure, I do feel it could have done with a bit more. In the episode, the Daleks are seen with a couple of accessories, including “black-out” covers for their head “lamps” and it’s a shame that the tea tray carried by one “Ironside” couldn’t have been included. 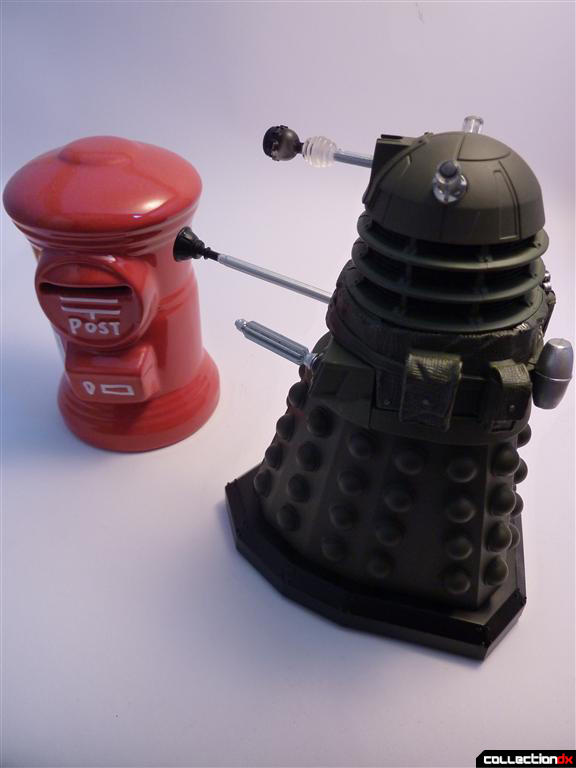 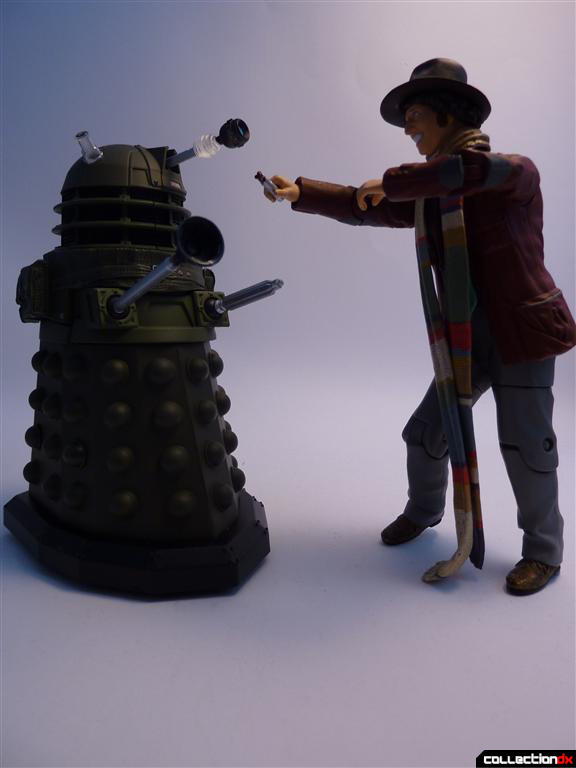 Another feature that would have been nice is some electronics; as seen in the following clip, the Daleks had some of their best ever dialogue in “Victory of the Daleks”, and this would have been a really special figure if it could have replicated some of it!

Having said that, though, given the price point and target market these are understandable omissions. Overall, this figure is one of the more unique looking Daleks out there, and will appeal to those whose interests crossover into military history as well as science-fiction. As with the rest of the Doctor Who range, it’s also great fun to have these figures interact with similarly scaled figures from other universes! 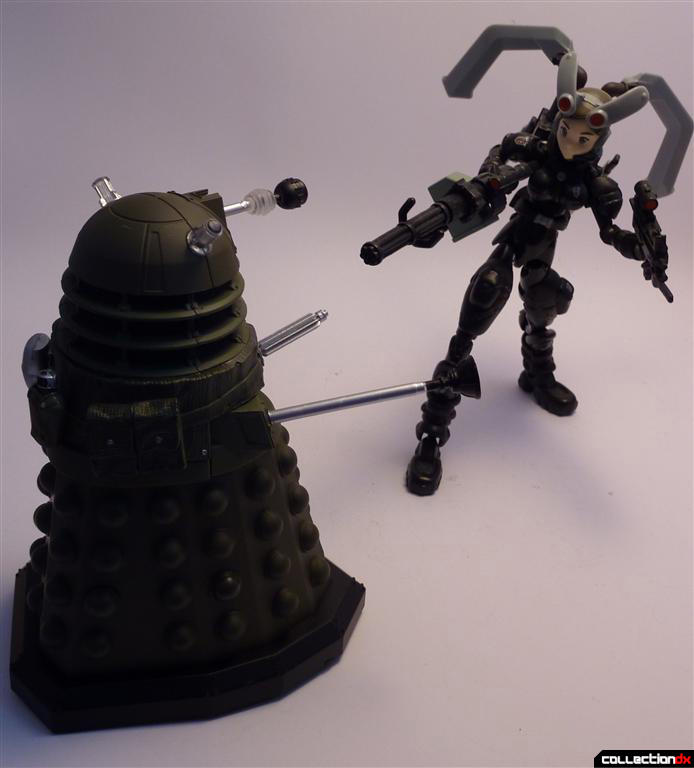 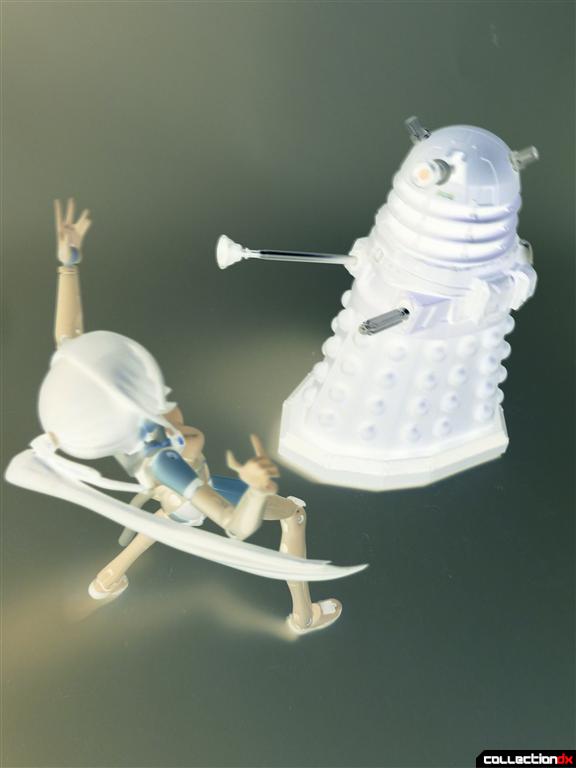 “YOU DO NOT REQUIRE TEA?”

6 comments posted
Great review. If I would let

Great review. If I would let myself, I would have a massive Dalek collection.

I know what you mean, its only space thats preventing taking up collecting Who toys...! (perhaps I need my own TARDIS?!).

I'd like to pass on my thanks to you and the Collection DX staff who helped me revise and then did the formatting to get the review onto the site.

Cool review. I can't wait till this guy hits US shores. That said, there is an electronic version coming in the remote control two pack and I presume it'll have some of this Dalek's phrases. As much as I like the colors and idea of a new design, I think we should have kept these Daleks for a couple of episodes before jumping to the new ones. Hopefully the RTD designed ones will eventually return.

I just looked at some Youtube vids of the R/C Ironside, and it seems to have the exact same phrases as previous models. But I can't say for certain.

Digging this new design. I have a few Daleks--my favorites being the one that opens up into a tiny playset and the big R/C one. Might have to get this fellow.

I love Green Daleks, but I don't like their suction cups. I want claws, more claws, and lots of claws on those baddies!