When Hikaru, Takeshi, and Ryo were tasked to find the Golden City, they were already pretty well worn out from the furious battle that had occurred only days earlier. The Supernova and Stealth Hunter Battle Machines damaged beyond repair in the battle, they had to fall back on the Grand Titan and Silent Strike respectively for the search, while Ryo vigilantly kept use of his small Uplink; Hayato had stayed behind to guard Sentai Fortress with the White Lightning. When the three finally found the Golden City and tried to get through its passive defensive field, their Battle Machines were hit with a powerful electric pulse which disabled them and fried all of their systems. Finally breaking inside, they eventually made it to the tall Golden Tower at the center of the city, where they found three advanced human-built Battle Machines in storage, waiting for them. Ryo claimed the smaller of the three for himself- the green & white Cyclone Defender. Unlike the customized Uplink, this was a true Battle Machine designed primarily to fight. Its main weapon is a small hand-held pulse laser blaster with good range & power for its size. Of interest is the parallel drawn between it and the heavy laser cannon & plasma staff used by Exo-Force’s more-recently designed Supernova- both use a power link system through the palms of the Battle Machines’ hands to transfer energy from their main generator directly to the weapon(s) rather than equipping them with independent power sources. Though Exo-Force designed a weapon of similar nature, the Cyclone Defender also carries three concussion grenades on its shoulders. But if the ranged weapons are used up or damaged, the Battle Machine has the option to go at it at melee range by throwing the pulse laser blaster aside to free up the three-fingered right hand. And though it can reflect a fair amount of energy shots thrown at it, the shield on the left arm is equipped with two sharp spikes on it that- when rotated up to high-speed- can cut through most kinds of armor plating. To remember and carry on the spirit of his beloved Uplink, Ryo attached one of the many tools from its storage cells inside the Cyclone Defender’s cockpit... “just in case”, he sentimentally told the other techs. The small Battle Machine seemed to be used as a close-range or inner-city support mecha for the original owners of the Golden City when it was built however many years earlier. Like Exo-Force’s Battle Machines, the Cyclone Defender uses a similar control system which mimics the movements of its pilot, so it was easy for Ryo to adapt to the advanced design. 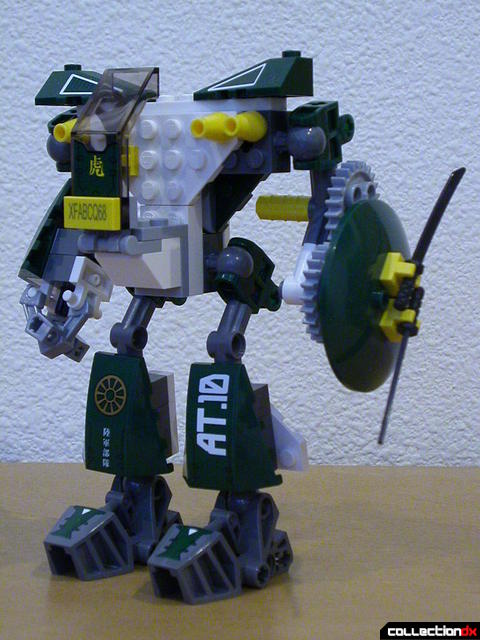 Ahhh... The Cyclone Defender (back) reminds me so much of the Uplink from the first-year 2006 “Exo Force” line! (I’m becoming nostalgic! *sniff*) Where originally most of the joints on the Uplink were snap- or free-rotation and this lead to various balance/posing issues (the similar-sized Sentry shared roughly the same design), the Cyclone Defender replaces all major joints- shoulders, hips, & ankles- with ball-&-socket joints, providing a much more flexible range of motion. This mirrors their frequent and popular use in the “Bionicle™” line which continues successfully to this day. This also becomes a well-known, if little-advertised, problem as LEGO’s ball-&-socket joints are known for wearing out quickly when used a lot and aren’t the greatest for supporting heavy loads. (I’ve become aware of this over time since I used to collect “Bionicle” sets too, and so I’ve become somewhat paranoid of ball-&-socket joints in new LEGO sets.) But you can’t argue with the results-! The legs can pose in more human-like fashion despite not having a knee joint; however the parts used for the knees bends a little to look like them. The feet are the same since-piece parts originally designed for the first six “Bionicle” Toa figures (#8531-8536) in 2001, but look appropriately functional here. The arms have similar upper arm designs but split apart here. The left arm has two medium-sized LEGO Technic gears joined together with the shield. And when the small shaft beneath the elbow is turned (you can’t really ‘crank’ it), the shield- mounting two katana-like minifig swords- spins in the opposite direction! (Make sure you orient the swords correctly when you assemble it, or it looks weird when it spins!) The right arm has a miniaturized version of the hands found on the previous year’s special-edition Supernova set- a post running through the palm, and three arms from the robot minifigs as fingers. The removable blaster is composed of simple parts, and is firmly grasped in the fingers; and like the Supernova’s, the peg in the palm of the hand fits inside the handle of the blaster to secure it. Unlike the Uplink set, the Cyclone Defender allows Ryo a bit more protection with a forward-pitching canopy for the open-air cockpit. And a minifig wrench is clipped to the pilot’s right. 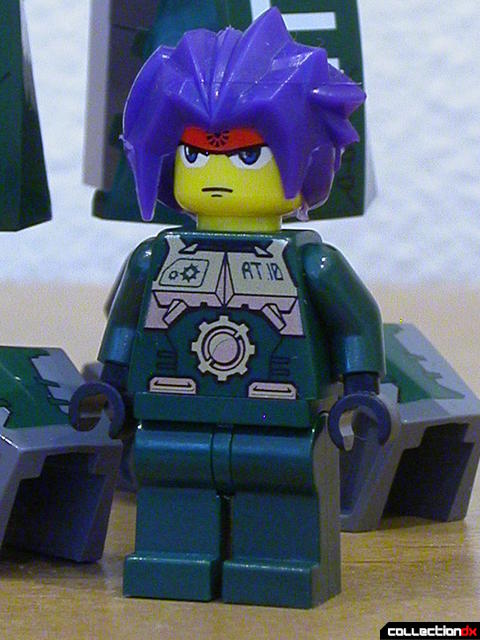 Lego Set #8100 comes with a new version of the Ryo minifig different from the previous year’s: a new ‘flight suit’ of green and gold, and he has the same two separate facial expressions (one painted on either side of his head) and purple spiky hairstyle piece introduced in the “Exo-Force” line, which adds to the Japanese anime style of the series. When the head and hair are flipped around, Ryo either displays a determined face, or a battle-cry expression, both with a red band above his eyes. (This double-face design originated in the LEGO “Spider-Man™” minifigs from 2001 and 2003, but is now becoming more commonplace in themed lines like “City”, “Star Wars™” and “Batman™”.) Normally, when a Lego set needs specific details on a part, such as a control panel or flag, the image is printed or painted directly onto specific parts. “Exo-Force” continues on by using stick-on decals; something that was rarely ever used in the past. There is a small sticker sheet which provides allegiance markings, warning symbols & notices, and names- some of them written in Japanese text! Translations of the Japanese text are given on the sticker sheet, but do not go on the parts. This allows for a wider range of piece marking without Lego having to create a completely different piece each time, and merges the “Exo-Force” and Japanese toy influence closer together. It does, however, have a small downside- because of the design of the decals, some of them cover places where other Lego pieces can go, which limits how a decal-applied piece can be used or taken apart. There are no conflicts in Set#8100.

The common gimmick of the debut 2006 line was- aside from them all being giant robots (!)- the introduction of the LEGO light brick with clear fiber-optic cable, though this was seen through almost all of the sets. They also had instructions for building an alternate set with the same parts on their homepage. Alas, neither of these returns in 2007. Instead, LEGO brings us a pivotal part of the storyline: the EXO Codes. When entered into the computer in the Golden Tower, they allow the refugees inside the Golden City to access a special feature within the ancient technological fortress. Each 2007 “Exo-Force” set has at least one exclusive EXO Code located on a flat 1x2 plate placed somewhere on the Battle Machine’s body. When entered into the Code Brick Central area of "Exo-Force’s" homepage, it gives you special access to new things online like exclusive background info on the set, stickers & wallpaper for your computer’s desktop, images to be used for real shirt iron-ons, IM avatars, and more! (Not to spoil anything, but the only really unique thing for each set you get access to is a 10-second silent video clip of your set in action on the site!) 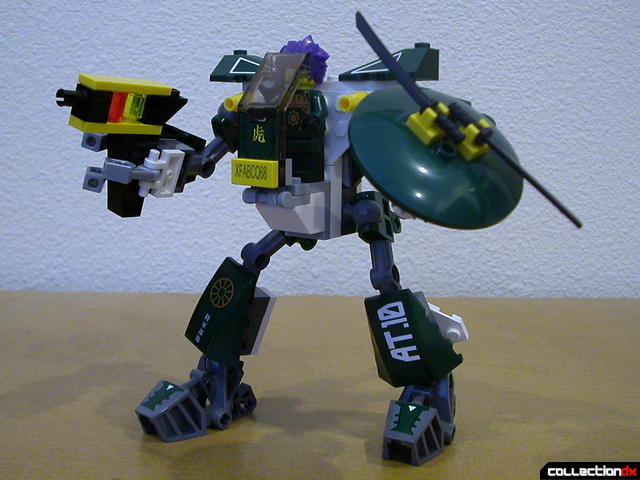 I’m writing this after the second-half of sets have already been announced, so I know what’s coming up. And I can say with confidence that, despite being the smallest set of the year, this is easily going to be my most-favored set of the 2007 line! (This is also, as far as I can tell, the only time that Ryo appears in a set this year.) It’s simple, but well detailed. It doesn’t give over to elaborate armor or special features; it looks “capable” and comfortable in its own skin. The colors used don’t conflict or detract from each other. And the small removable blaster was a good idea and tilt of the hat to the Supernova [which changed my mind about hand-held weapons in this series]. Also, the flaws of things coming apart easily, or rickety, awkward joints & poses was resolved to great satisfaction with the ball-&-socket joints- though I won’t advocate on them being used for any of the larger sets... If you want just a sample or taste of the 2007 line, if none other, the Cyclone Defender is a must-have! 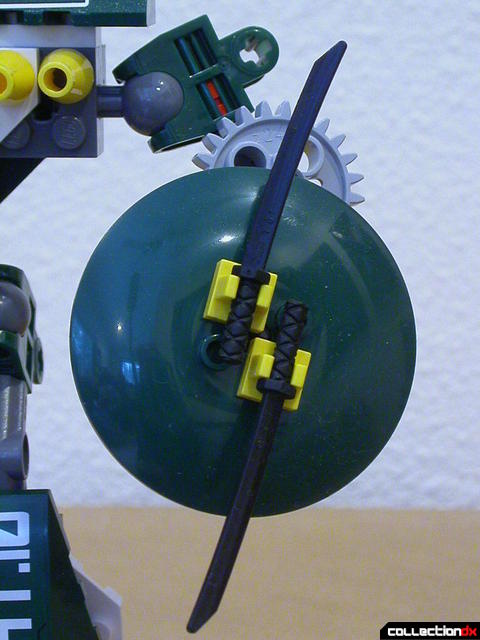 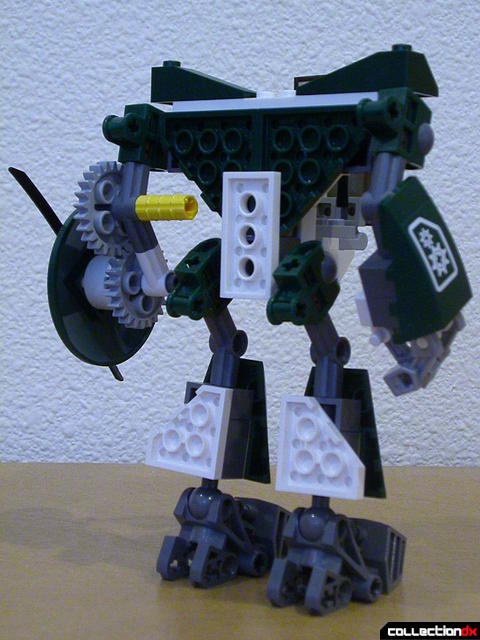 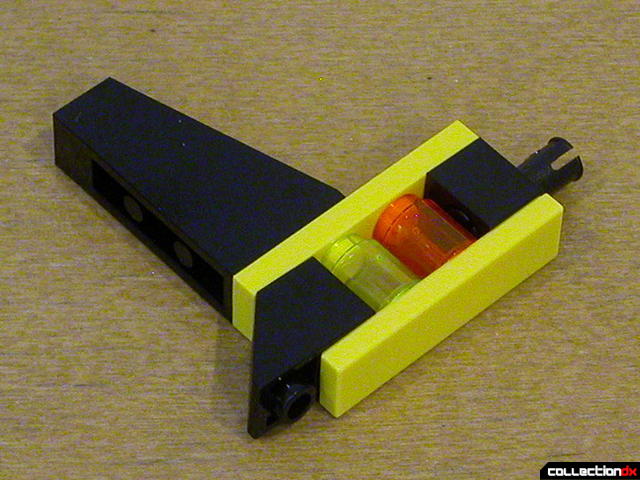 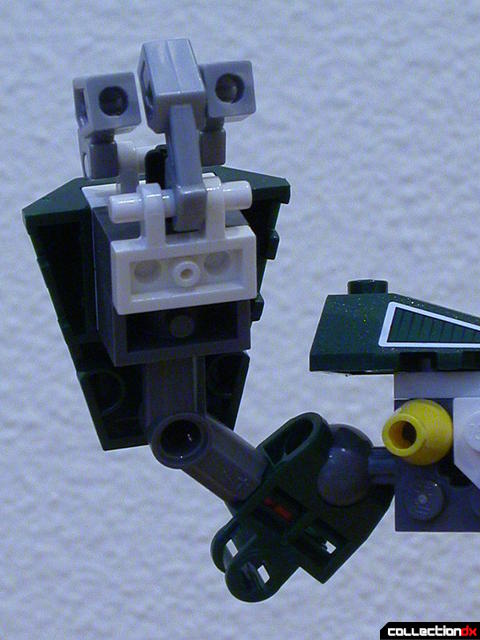 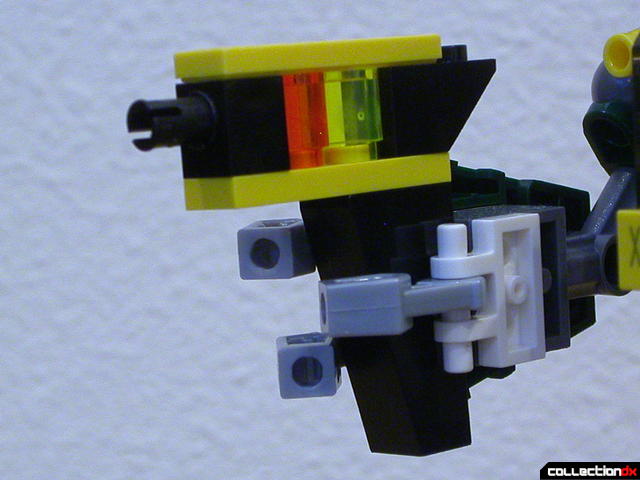 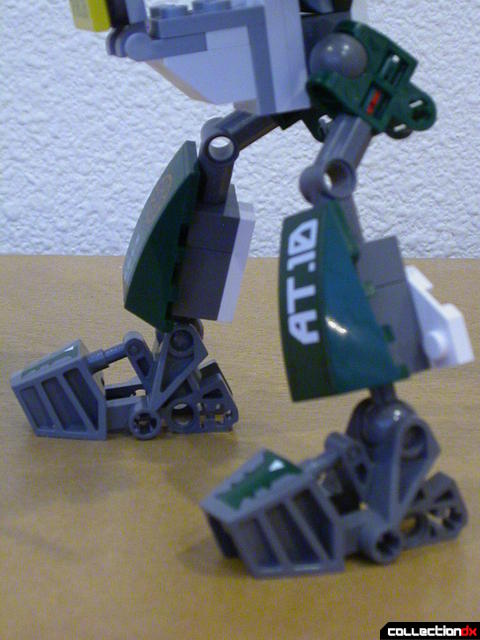 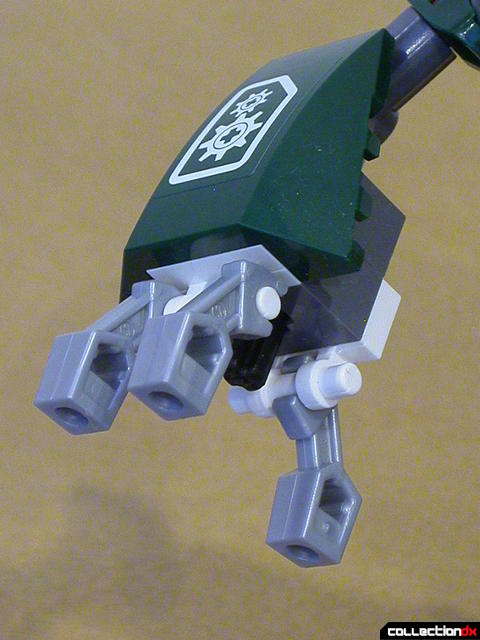 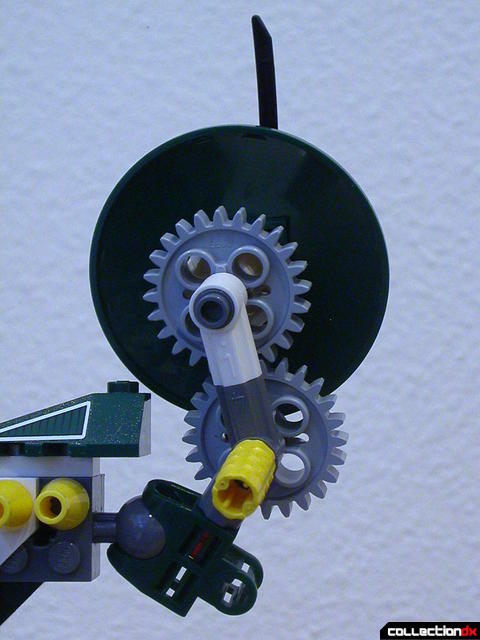 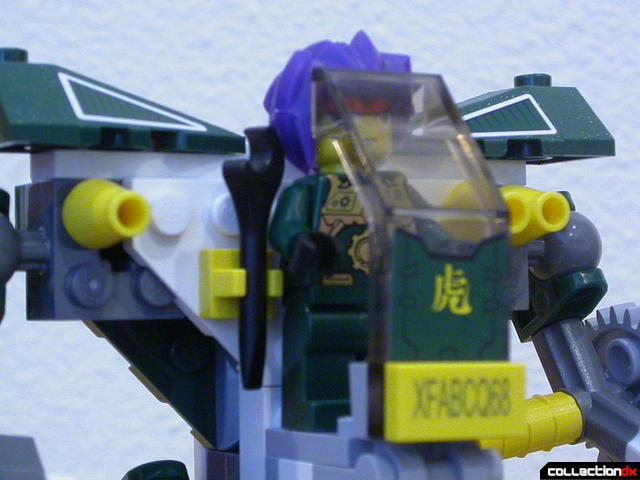 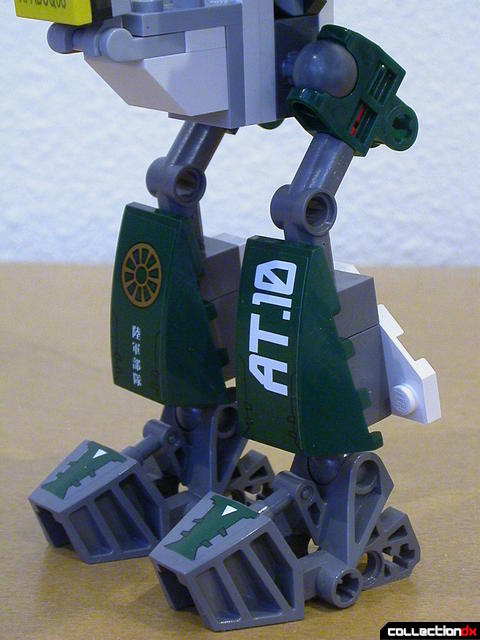 1 comment posted
My son and I had a lot of

My son and I had a lot of fun building this. Thanks Eva!