So there I was perusing the isles for some new Generations figures expecting to be disappointed with the usual variety of boring offerings, when out of the corner of my eye, I see some eye catching packages. "Oooh" I thought, the new Dark of the Moon figures are out. Too bad I don't like movie figures. My eyes shift and I catch a glimpse of the DOTM Cyberverse Powerglide! I swear my forearm shot out like rocketpunch action to grab it before anyone else did. Although it's highly doubtful since I was the only one in the isle and it looked freshly stocked. However, this was the only Powerglide to be seen. 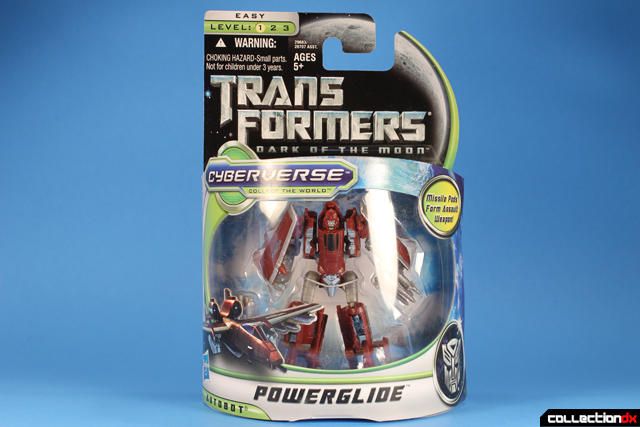 After I violently ripped Powerglide out of his package I felt a warm tingle inside. Although this is a new rendition of Powerglide, it is unmistakeably Powerglide. Colors and alternate mode are just right. 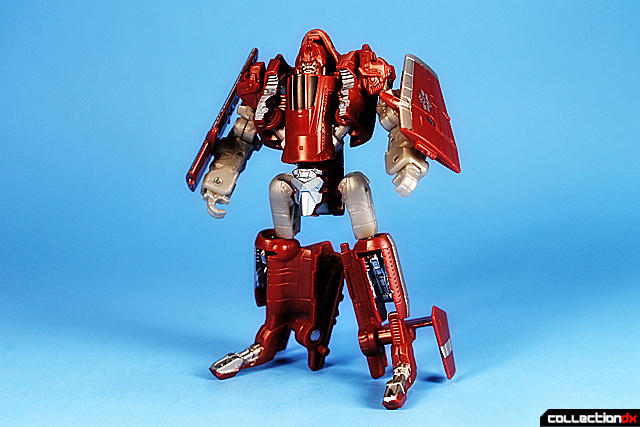 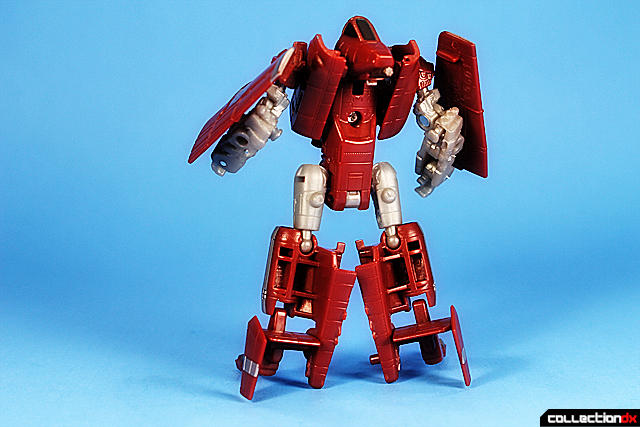 Granted he has a movie-style face, but hey, it's still Powerglide. 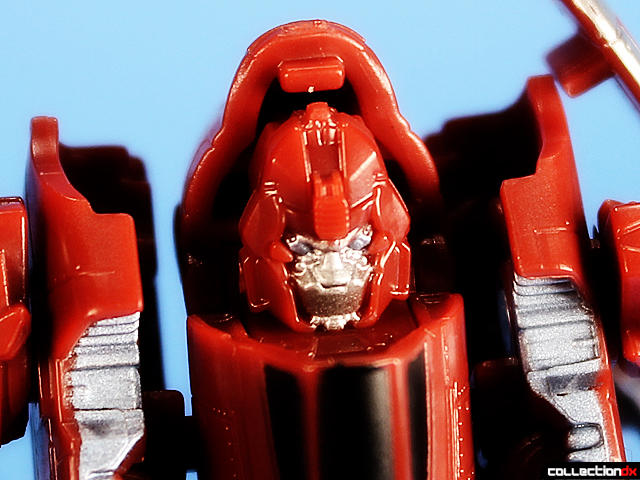 His weapon is made out of his wing mounted missiles which must be folded and snapped together to form this gun. 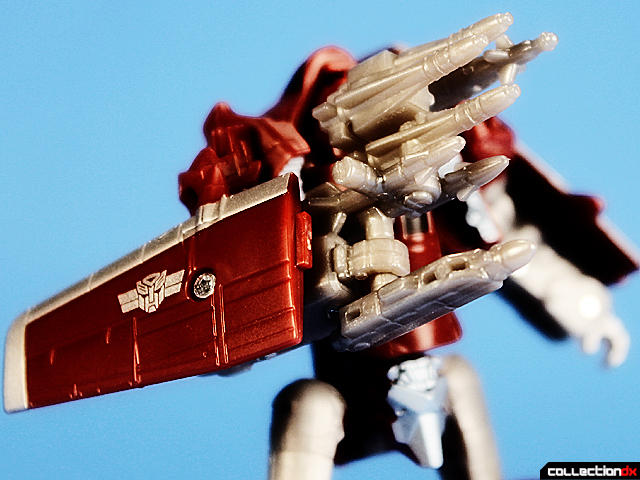 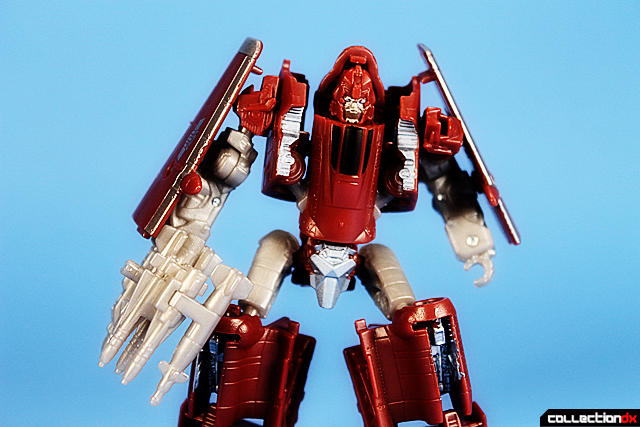 He is rather pose-able due to some well places ball joints. I like that they use nice rivets on the arms to keep things nice and tight. Not digging the pointy foot and high-heels look though. But hey, it's still Powerglide. 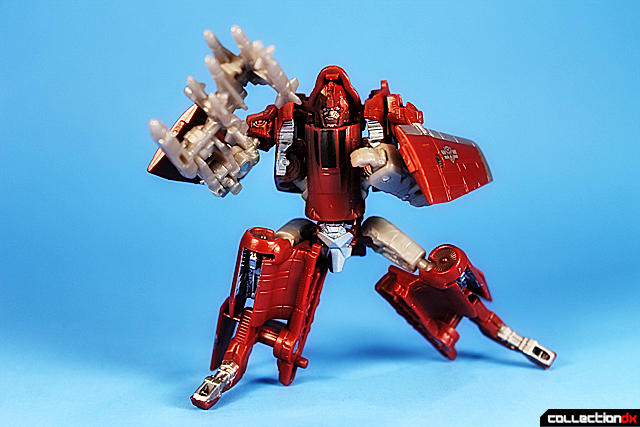 Transformation into his A-10 Warthog inspired alternate mode is simple, but I got caught having to look at the instructions the first couple of times. The arms always confused me. The transformation is rather clever for it's simplicity. Here is his alternate mode. Check. Out. The. Landing. Gear. Yes, he has sweet little landing gear! Simply use your nail to deploy. 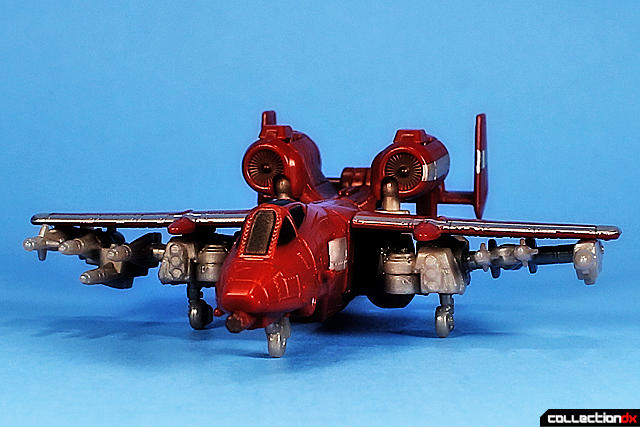 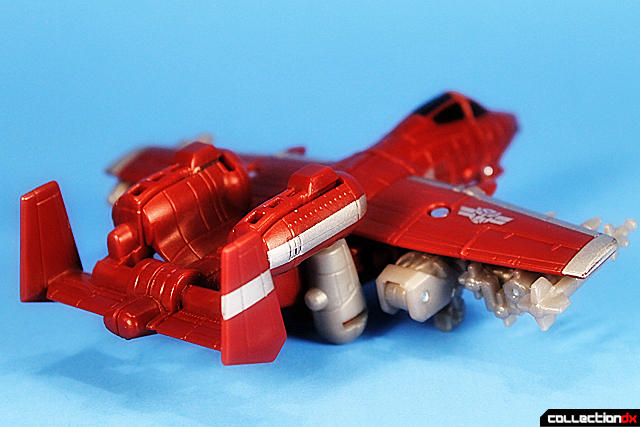 The end result is rather clean, there is minimal leftover "kibble" so it is not immediately obvious that it is transformable. Even the undercarriage bares little evidence that there is more than meets the eye... 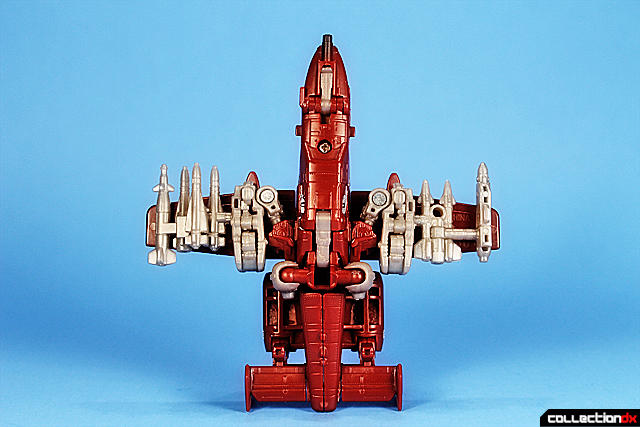 So if it wasn't obvious, I like Powerglide. He was one of my childhood G1 toys, so he holds a special place in my robot-loving heart. Fortunately for me and many others who like him, he is now available as a new release at an affordable price.

I just bought this last night! I'm not a fan, though; I just thought he looked neat. My wife doesn't usually pay that close attention to what the toy is (though sometimes she'll ask). So, since I bought it with the other grocery items, she was looking at the receipt like usual and then asked:

"...did you just buy something called Powerglide?"

"YES I KNOW. They named him in the 80's whatdoyawant?"

"They still had...personal lubricant in the 80's. Not much of an excuse."

*ahem* anyway, he's an awesome figure! I'll be completely honest, though: I totally didn't think about the name that way until my wife brought it up. I dunno how I missed that one.

This guy was the first I bought from the Cyberverse line, and now I own all of them.

I'm not sure what happened.

Most of the DOTM line hasn't been impressing me, but I ordered this guy since it combines the best aspects of the movie design sense with its G1 look.

I spotted Leader Ironhide at a Costco last week for $40. I'm hoping to get him soon, though I'm skipping the new Ultimate (yep, the THIRD one we've gotten, WTF) and Deluxe Bumblebees they had, and averting my eyes from Sentinel Prime until I see the movie. Right now the only sets I've unintentionally seen that are of any interest are the three Rallybots and MAYBE Voyager Megs, because I'm avoiding spoilers once again.

Dammit- they need to give us a new RotF Leader Megs, and Leader versions of Blackout and Demolishor! Then I will be a happy camper.

So far I only have deluxe class Starscream, Roadbuster . Powerglide with Voyager Shockwave have been ordered.

It's best wait until after the movie rush comes since of course more molds will be coming. I'm liking the design for Dino (was to be Mirage) based on the trailer. I might get Laserbeak too since I like animal Transformers.

Given the fact that Megatron sports a very different look this time...again, and how both Blackout and Demolishor didn't do very much aside from the early carnage scenes, I wouldn't hold my breath on Hasbro and TakaraTomy releasing Leader versions of them. Though how the hell they expect yet ANOTHER giant Bumblebee toy to sell, I haven't a clue. I haven't seen Battle Ops Bumblebee move very quickly even when on clearance...

DOTM Voyager Megatron, though, is great fun. AND integrates his Mechtech weapon into the vehicle mode!

The leader class figures do little for me. They tend to be overly gimmicky and lights +sound (especially sound) are useless features for me. I prefer smaller TFs (mostly deluxe class and scout, voyager for rare occasion).

I do have Leader Prime from 2007 and think it's cool. I picked up Leader Starscream a couple of months ago but not even a half hour and I managed to break its toe, so I returned. I like the mechtech one better anyway.

Couldn't agree more. I picked up Powerglide about a month ago and couldn't be happier. The transformation is a work of art. The vehicle form hides the robot better than any figure in this size. And it's a solid toy in that mode, too--nothing flops about. The "shoulders" on mine don't peg into the body as firmly as I'd like in bot mode, but that's a minor quibble.

My only real complaint is the landing gear. A great addition to a nearly perfect figure...ruined by basic weight distribution?! Like your last pic shows, the tail end is too heavy, causing the nose to point skyward. How did you get that front gear to sit on the ground in the pic prior? Didja cheat it a bit, or is there a fix?

Oh, I most definitely cheated. I meant to complain about that but it never made it into my final draft, I was just happy it had landing gear at all. A tad annoying though if you wanna display in vehicle mode.

I seen these guys at my local stores and they look cool.... just not £9 cool that's £1 more then a basic and its a smaller toy overall... i just cant justify it even if it is really cool

About the landing gear, I've found out what to do to make it work a bit better. Turn it into the jet mode and deploy the landing gear and then press down slightly on the jet. It'll bend down a bit and then stay a bit more balanced. Seems to help with mine, hopefully it will with others as well.