Transformers the last knight’s Premier Edition Berserker was a figure that although I had some problems with, I still

really liked it overall, so although I was a little apprehensive about the figure, I decided to get his Decepticon Dread colleague Crowbar anyway, and although I can’t say I’m necessarily dissatisfied, I can’t say I’m all that super impressed by him either.

In vehicle mode, Crowbar is the same style government SUV as Berserker was, and I really like that they are following up on that and making another Decepticon Dread of the same style and size, hopefully, we’ll get a new Crankcase to match! The execution of this mode is pretty good just like Berserker, but some aspects are better than others. Crowbar’s alt mode is much sturdier and solid than Berserkers which I really appreciate, but not only are the robot parts more visible, but also his dual club weapons don’t actually store underneath, instead just sitting off the sides, it’s menacing but they don’t even stay on! One thing Berserker does just as well as Crowbar, is the paint as both of them have identical alt mode applications, such as the red sirens and both Chevy logos, small details that I really appreciate! 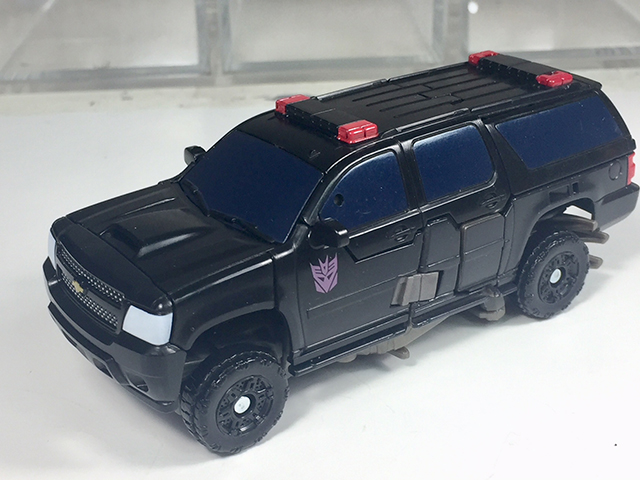 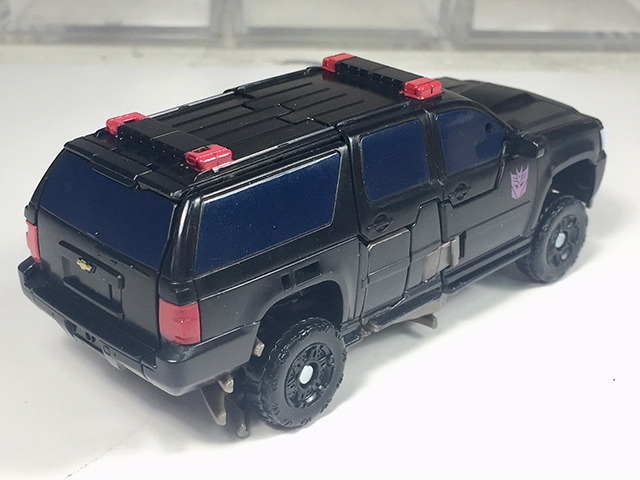 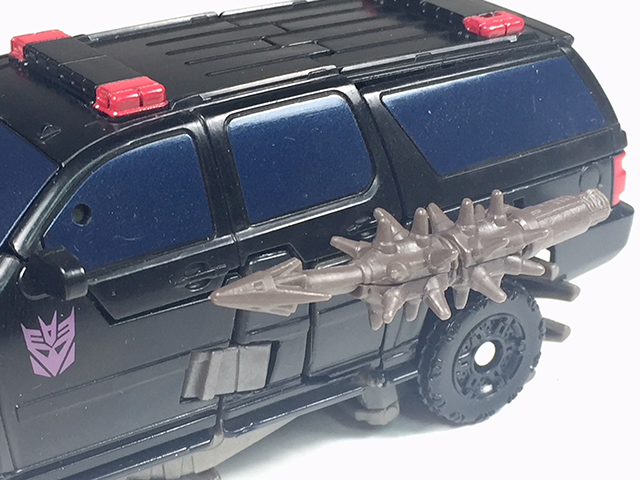 Crowbar’s transformation is similar to Berserker’s in terms of how the limbs and backpack works, but the biggest addition Crowbar brings are his many tendrils. From vehicle to robot these are no issue, but getting them compacted when going the other way can be very annoying at first, but they really aren’t a big deal once you figure out your preferred way of dealing with them. I fold the tips behind his head once the arms and backpack are completely in place, but before the legs are so it secures them down. As a whole, this transformation seems a lot more intimidating and annoying than it is.

In robot mode, Crowbar’s hunched posture, huge clawed feet, and numerous tendrils make him look very different from Berserker, it’s very impressive how the same vehicle can yield so different robot modes! These two really look great together, despite the fact that I don’t really like Crowbar as much as Berserker, having them together like this makes getting both pretty worth it in my eyes. In robot mode as I’ve said before, Crowbar always has a hunched over posture, and while I know this is only accurate to his film depiction, I wish he could look better standing straighter up like Berserker, and that his head could move side to side a little less awkwardly, I will say at least Crowbar’s head stays on! I really like Crowbar’s head sculpt, it reminds me of the Predator as a dog or a snake, which is really awesome! I especially like his 8 eyes, all of which are painted very cleanly despite their small size. One other point of note are his arms, as although they work just fine I’m not a big fan of how thin his shoulder struts are, or the kibble hanging out the sides of them, they just look a little off to me in those respects, and just not as visually strong as Berserker’s do. Still a decent, cool looking but flawed robot mode. 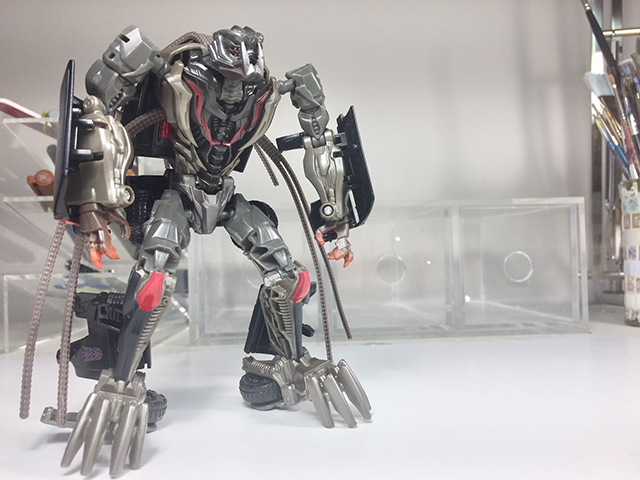 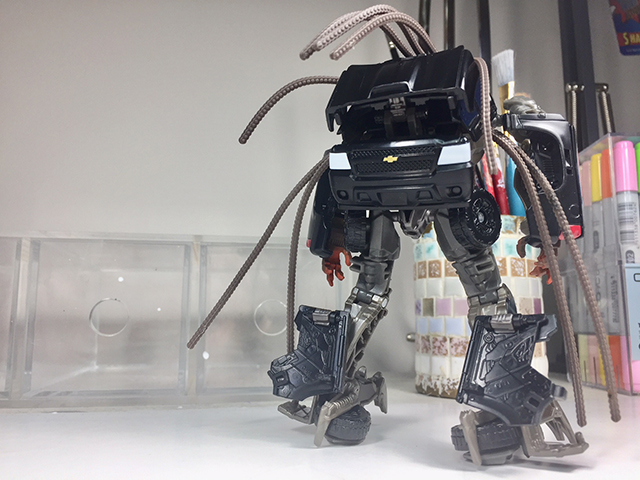 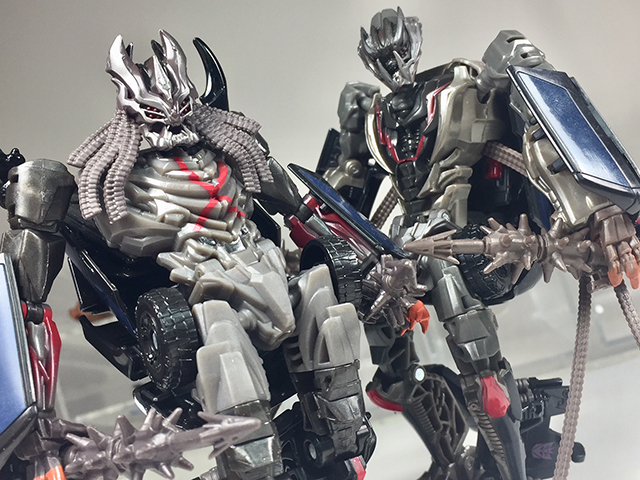 As far as accessories are concerned, Crowbar’s are the same spiky clubs as Berserker’s, which I really like, but he can’t actually hold them as well which is kind of annoying. He does look pretty awesome with them though! 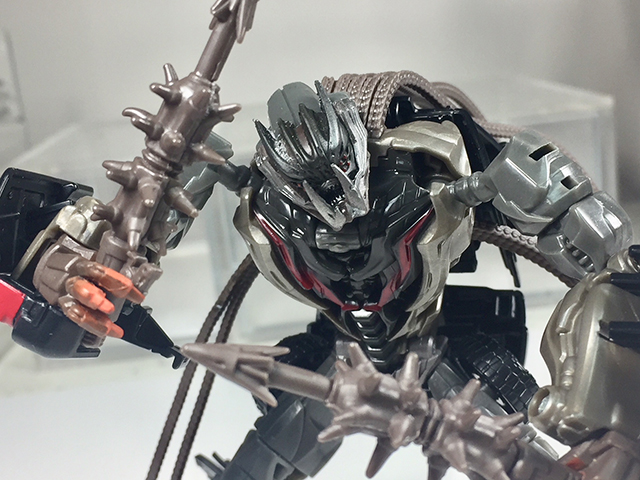 Overall I can’t say too much one way or the other about Transformers Studio Series Crowbar, he has a cool looking, film-accurate robot mode with decent paint apps and a pretty good vehicle mode, but a transformation that starts annoying, and just turns out to be nothing special. He has decent accessories but doesn’t hold them very well, and decent articulation let down by his permanently bent posture, really for everything beneficial this figure adds to Berserker, something is taken away, leading to an overall lesser figure than his Decepticon Dread Colleague, and a pretty much nonessential yet harmless Deluxe class figure. Maybe just get this one if the design interests you or you want to have a counterpart for Berserker, otherwise you won’t be missing too much without Transformers Studio Series Crowbar.