Perhaps the single coolest thing about being a monster collector is that, for all intents and purposes, we have our own holiday! As a result, every year new things are released in all manner of genre that collectors can sink their teeth into, sometimes even literally in the case of Halloween candy and things like that. Halloween decorations of all kinds offer the monster enthusiast many different options to help enhance their displays. Can you imagine if every year there was some sort of super robot holiday?!

In 2006, Department 56 released a series of Halloween decorations featuring some classic Universal Monsters. These small dioramas were beautifully crafted and included a light up feature but carried a price tag of approximately $55 each, which put off many potential buyers. Fortunately, these recently turned up at a greatly discounted price at TJ Maxx and Home Goods department stores. This diorama, entitled "The Creature's Lair", now carried a price tag of only $12.99! 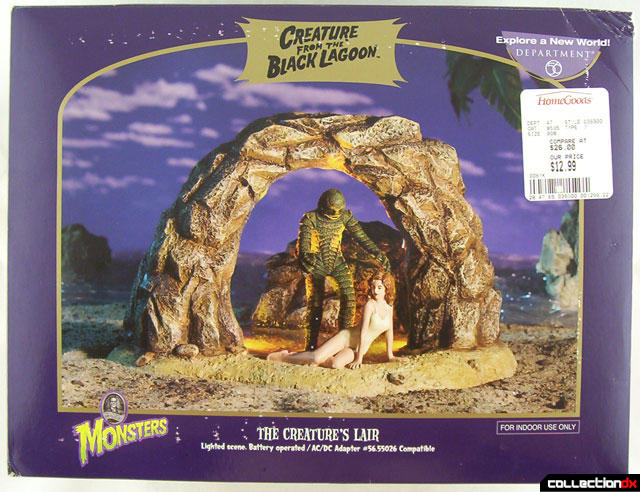 Over the course of about 5 days the week before last, I went to roughly a half dozen of these stores and was only able to locate one "Creature's Lair", which would suggest that it was more popular than the others in the series (those being "Frankenstein's Laboratory" and "Dracula's Domain"). It is plain to see why, too. Not only is the Creature generally a more popular character, but the craftsmanship that went into this piece is clearly superior to the others, at least in terms of the presentation of the main character, which is, of course, the most important thing. 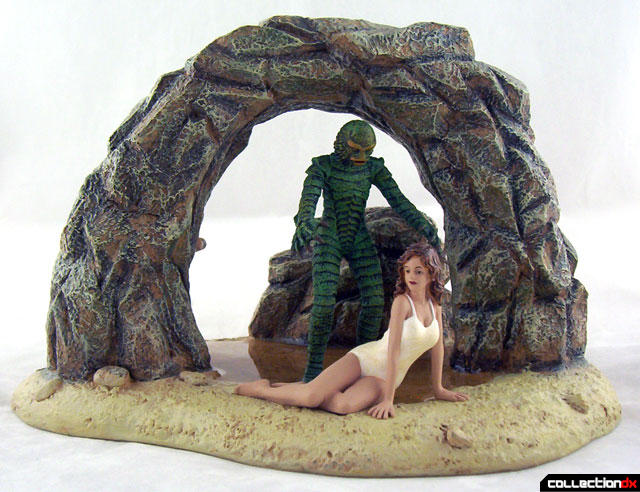 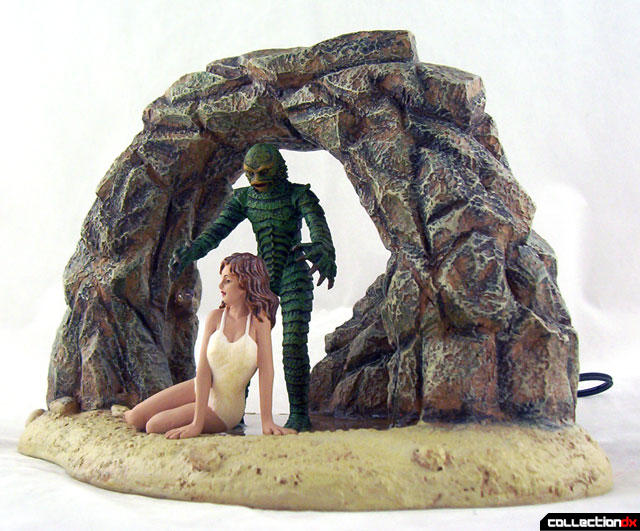 At approximately 6" high, 9" long and 6.5" deep, this miniature scene is beautifully sculpted and painted. The cave walls appear as true rock and there is a clear plastic covering on the sand that magnificently gives the illusion of a pool of water at the feet of the Creature. 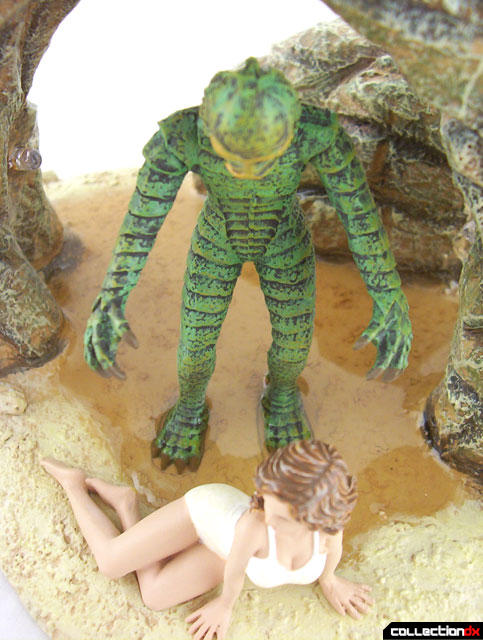 Any complaint about the sculpt of the piece would be that the damsel in distress doesn't look exactly like Julie Adams, but it's not bad. It might also have been a licensing issue. And that's not to say she doesn't look good, anyway.. 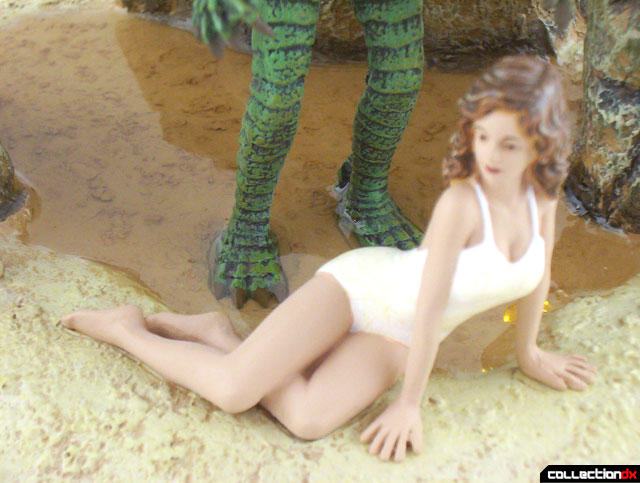 Protruding from the back is a cord into which you can plug in a power source, containing two separately sold C batteries. Each piece in the series uses the same part so you can swap them out if you like. 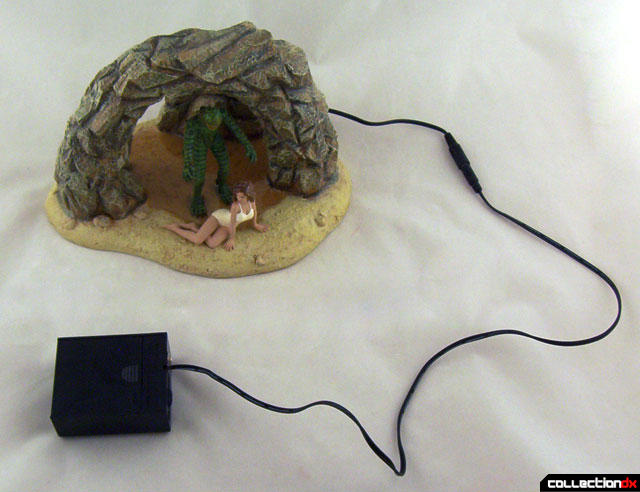 With the power cord attached and the "ON" switch activated, the lights add an eerie luminescence to the scene, particularly as it reflects off of the "water". I think it would have been nicer if you could have activated the lights via a concealed switch actually on the display, such as fake "rock", much like on the Destroy All Monsters Battlezone Godzilla 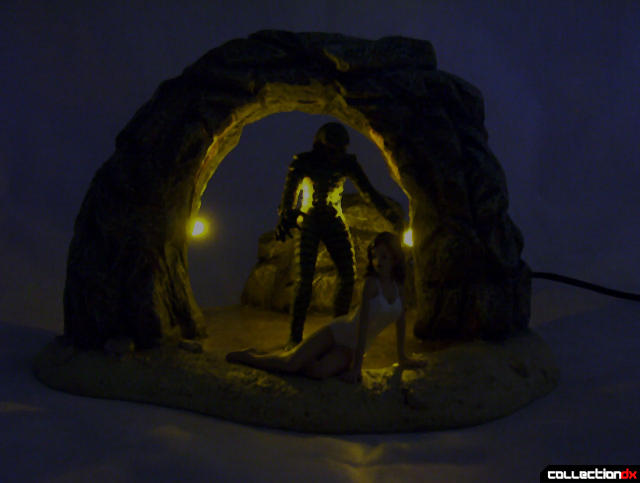 My biggest gripe with this? Well, the bulbs for the lights are not well concealed at all. It looks like the Gill Man has had some wiring done in his cave! One enterprising collector had the excellent idea of adding some plastic aquarium plants to help cover them up and I think I'll be doing just that at some point.

Still, I can't complain too much. I'm getting monster memorabilia released in the middle of the summer and at a fantastic price. I couldn't recommend this at $55, but for $13 it was a no-brainer for me. 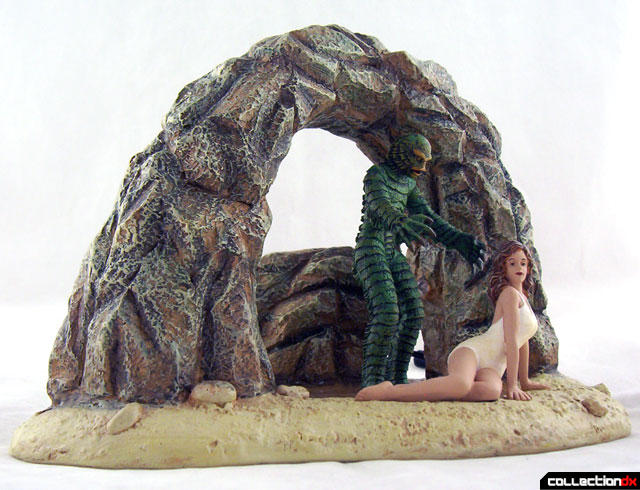 Damn, not a bad piece at all. Great job with the photography, NekroDave! The lighting looks killer!

If only they'd done a better job with the Julie Adams likeness...I know, I know--what can ya do? But if it did look exactly like her, I'd pretty much have to get this!